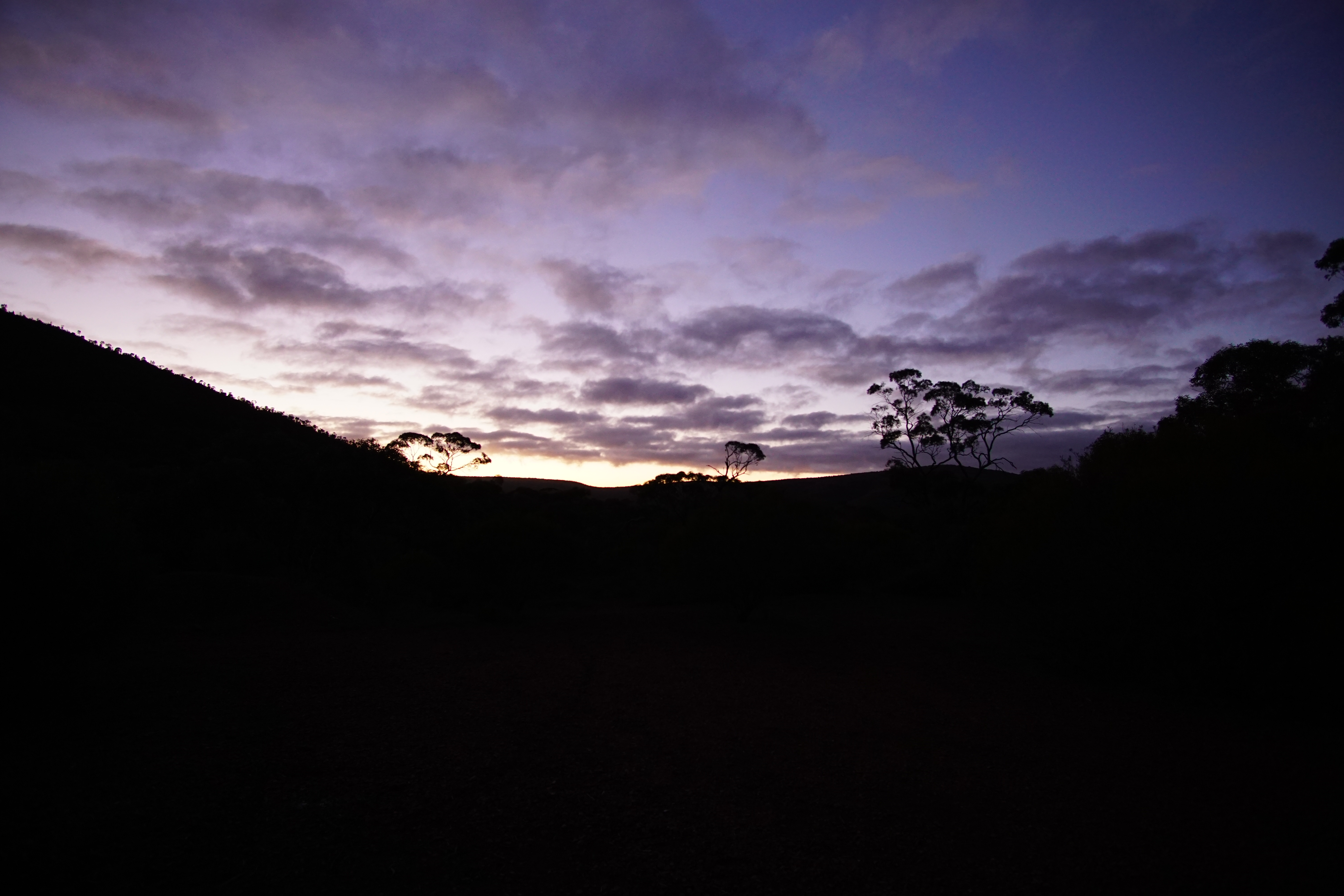 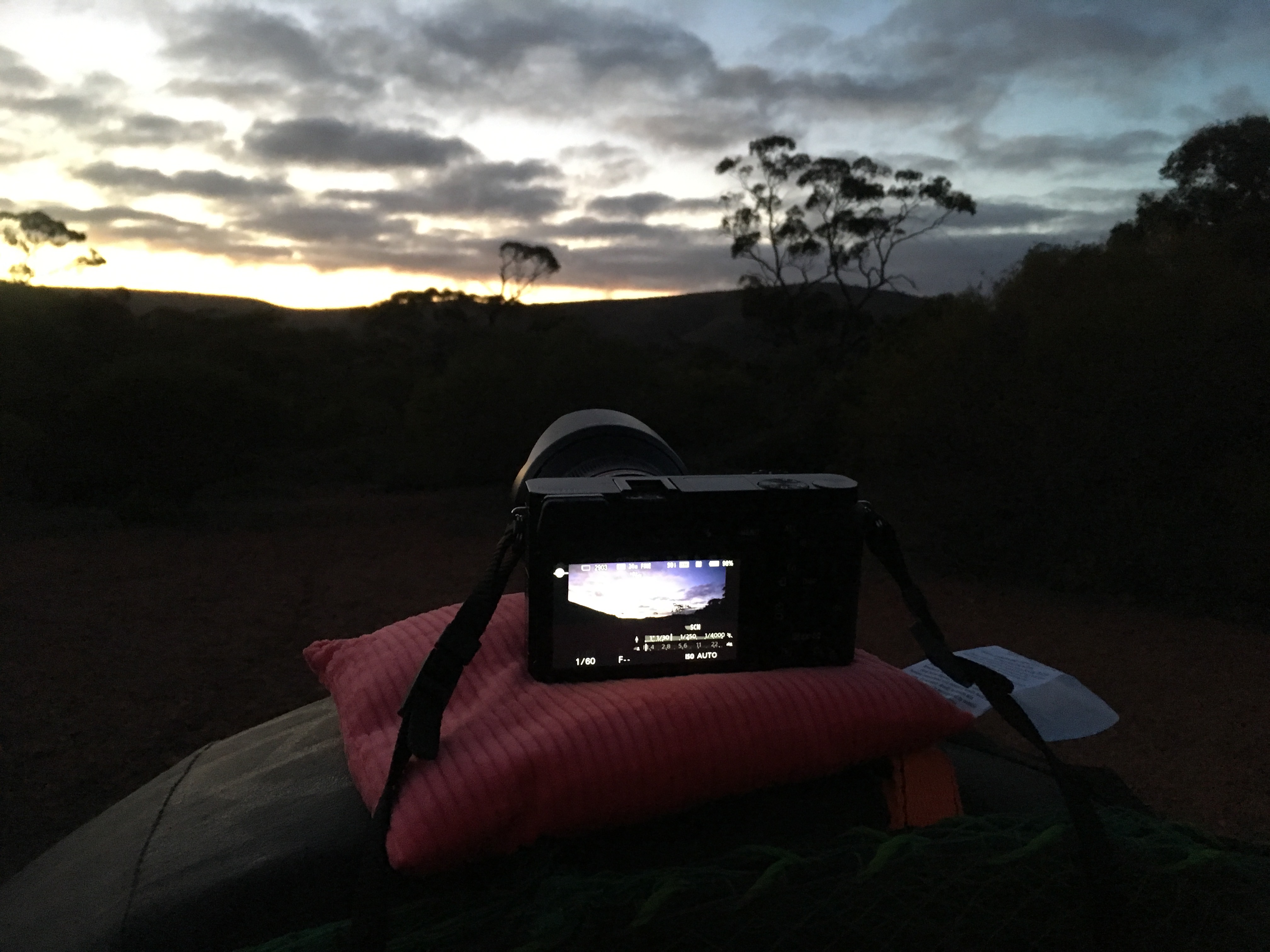 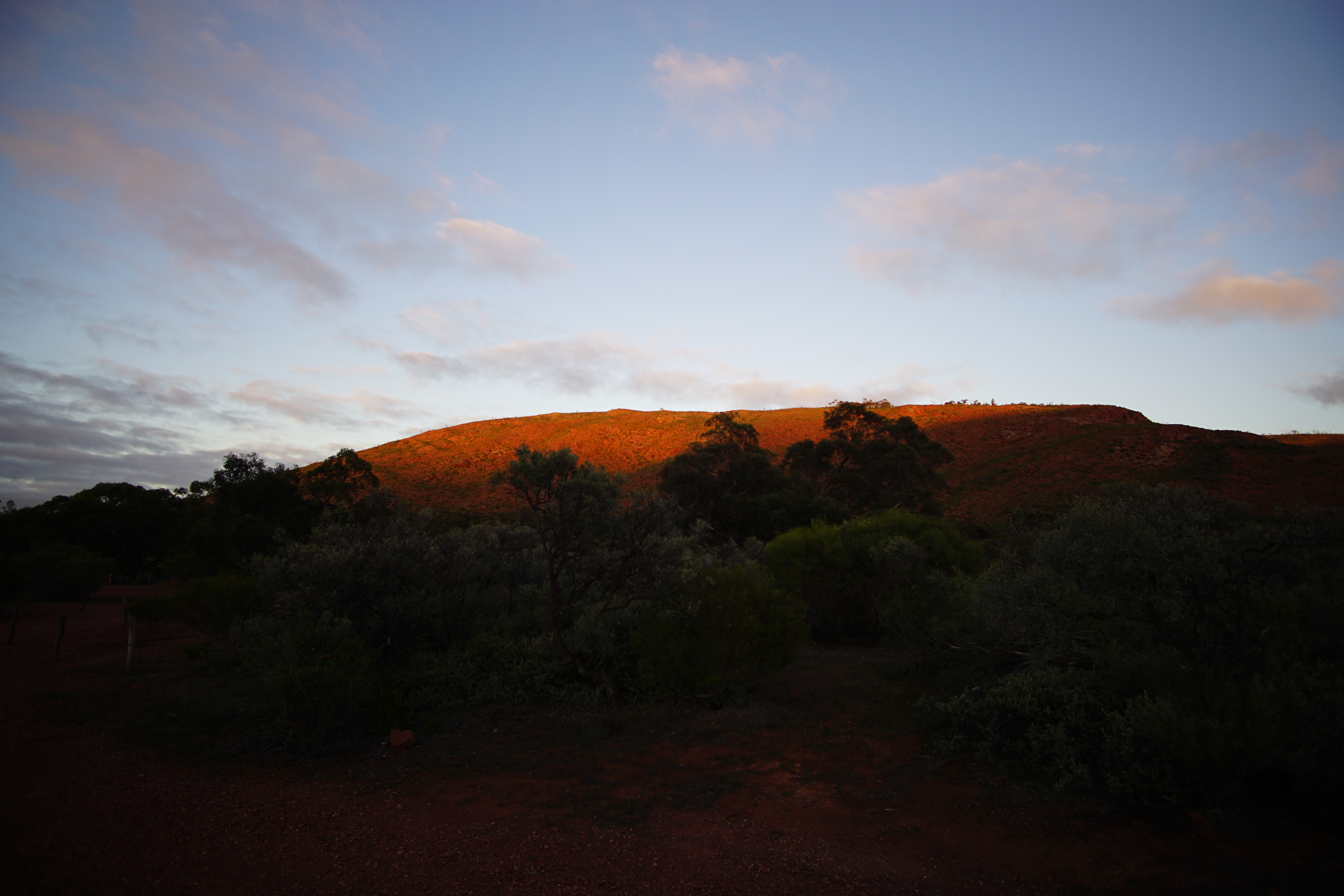 With nothing to accomplish today except exploring our local area, our pace definitely slowed appropriately. Bacon and eggs for brekky (which we normally have when we go away, aware that having that for breakfast everyday for a couple of weeks probably wasn’t the healthiest option, meant this would be just an odd treat).

Back out on to the corrugated main track, the red earth contrasting with the ethereal blue/grey green of the Pearl Bluebush and then the vibrant yellow of the small trees coming into bloom. 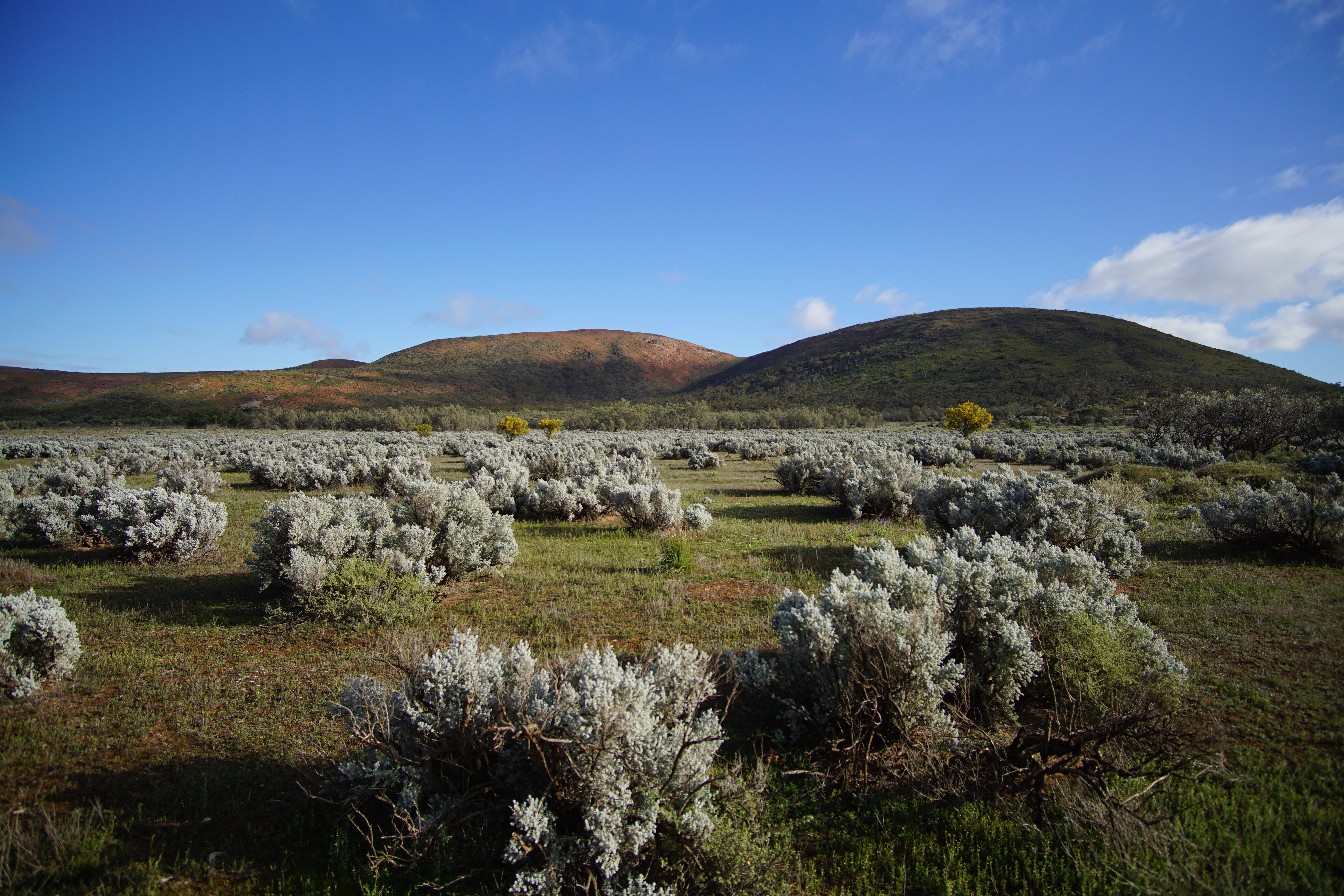 In fact this (late August/early September) is a great time to be exploring outback South Australia, cool nights, enough sun in the middle of the day (I may come to rue this judgement in a few days…) and still some water on the ground, lots of wildlife and everything that can, coming into bloom. 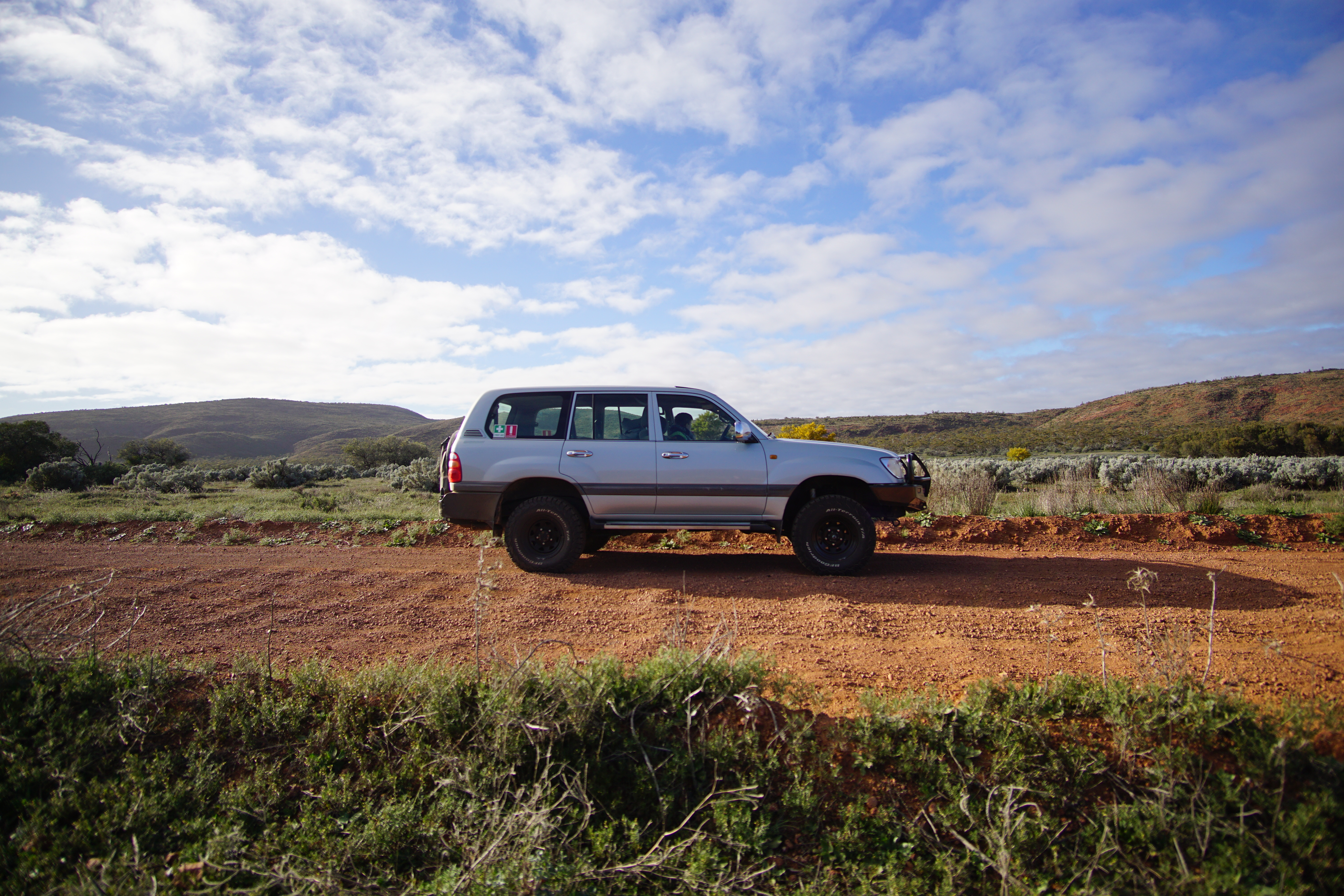 Our first stop was the ‘Organ Pipes’, the name given to many of the columnar jointing rock formations in these ranges (which were formed volcanic activity 1.5 billion years ago) with very angular and geometric looking shapes. The red rock covered in grey/white algae. This gorge, as with many here would be home to a spectacular waterfall when the rains would eventually come. 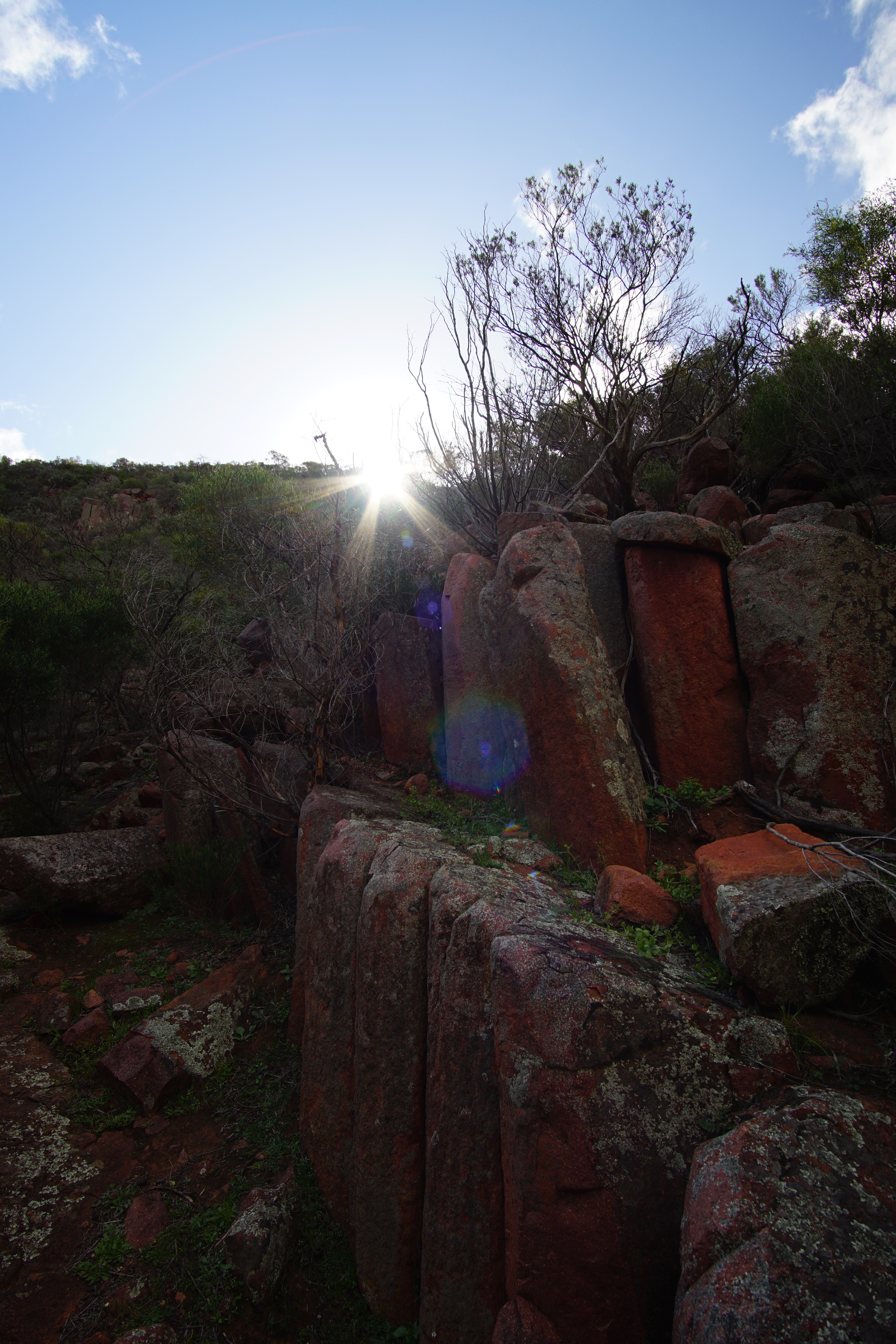 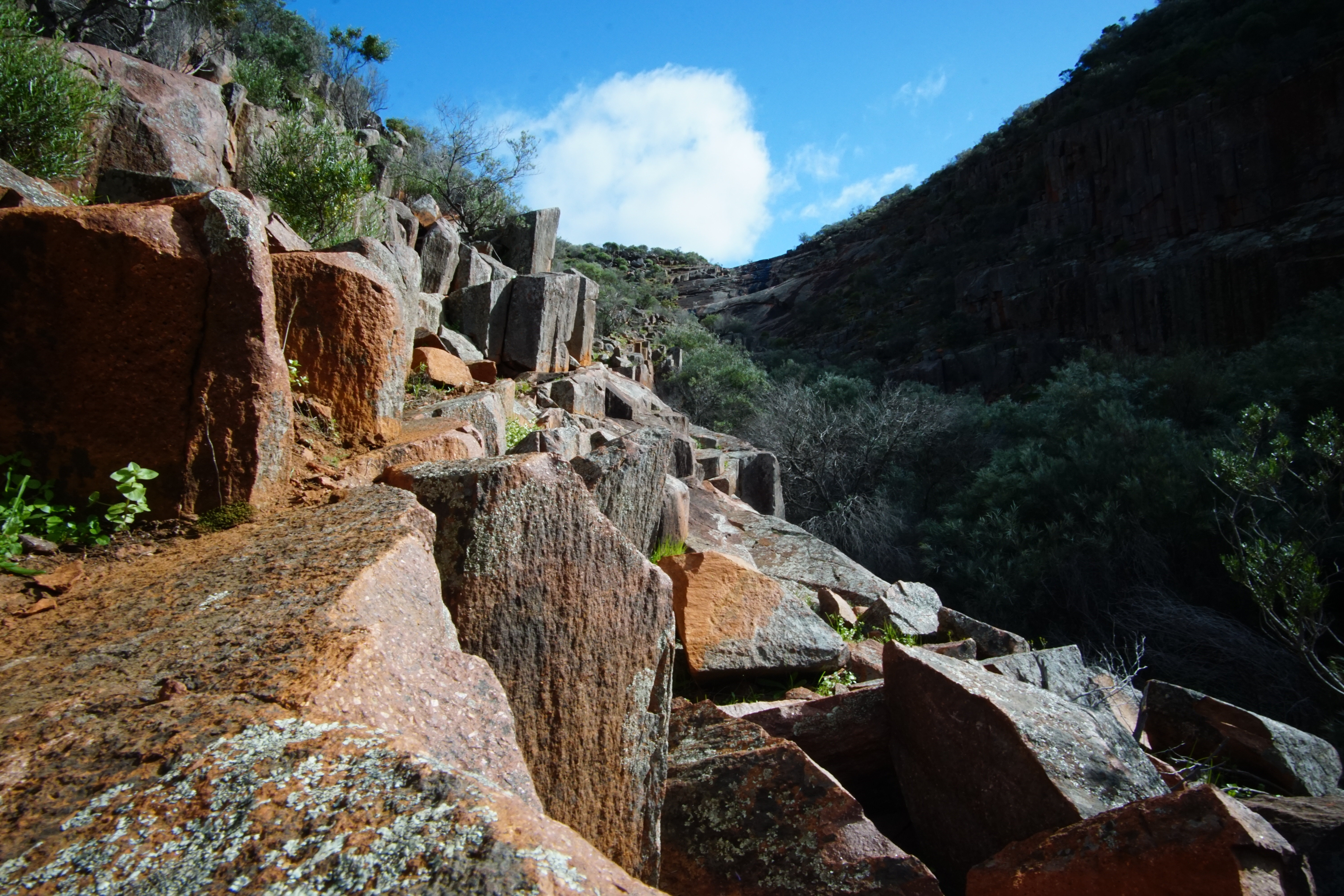 During the 10km-ish drive out to the Organ Pipes, we saw much wildlife. Kangaroos of all sorts, emus, and a large amount of bird life. Possibly capped off by the vibrant flash of aquamarine of the ring necked parrot. I’ve only ever seen these birds in this type of country and they are spectacular, coloured like a tropical inhabitant, they draw the eye like little else. However, as we spent the next few hours trying to, I would suggest they are very difficult to photograph. Even if you can see where they went, you’ll be lucky to get within 100m of them on foot before they take flight again, well away from you. We just need a few to hang around the campsite… 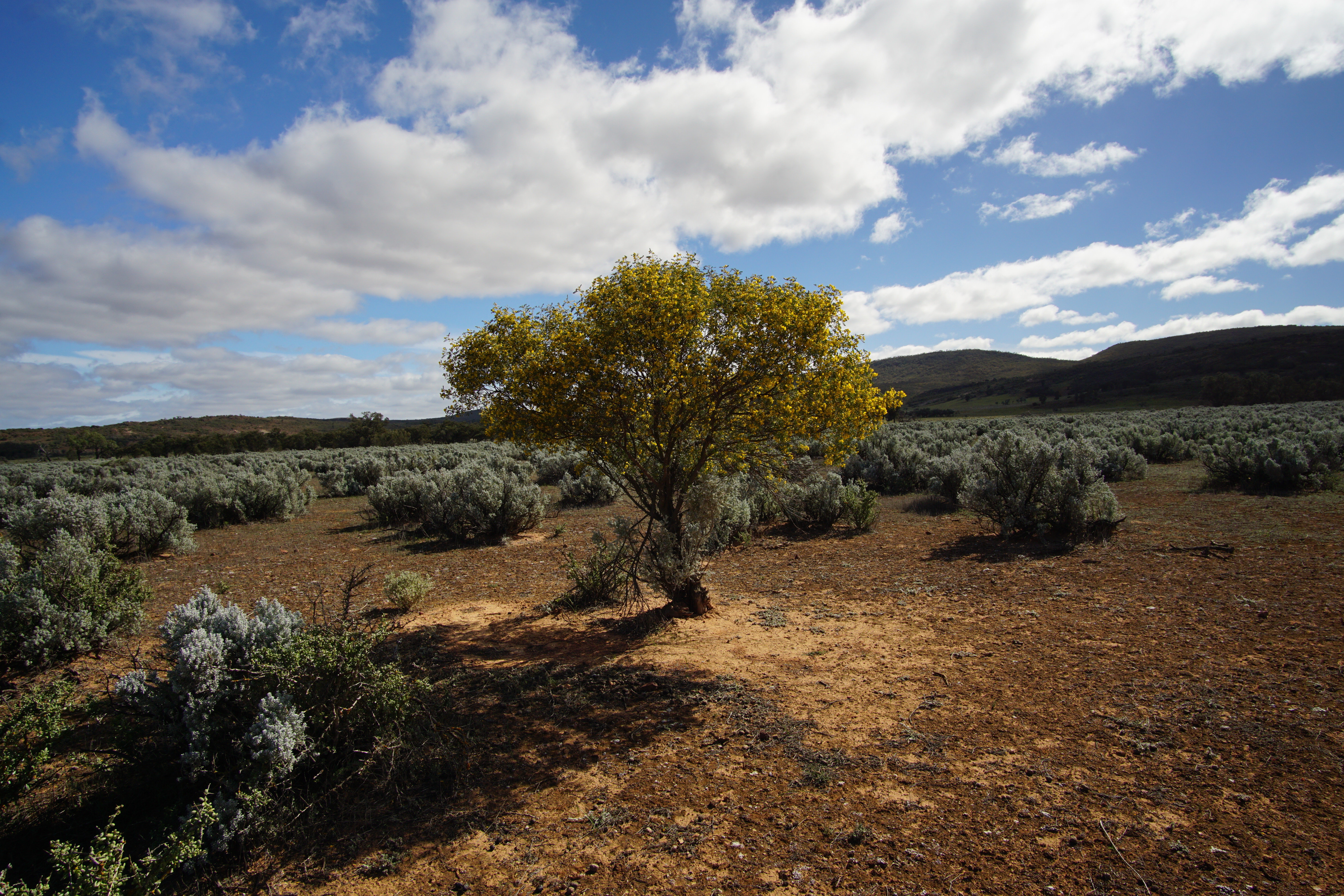 We wound back into the park, just following our noses and a few trails that intersected the main southern and northern tracks. A stop for a tailgate lunch, just enjoying being out in the bush. Plus seeing the sights and sounds of nature all around us (these more remote national parks are particularly good for wildlife, as you would expect). 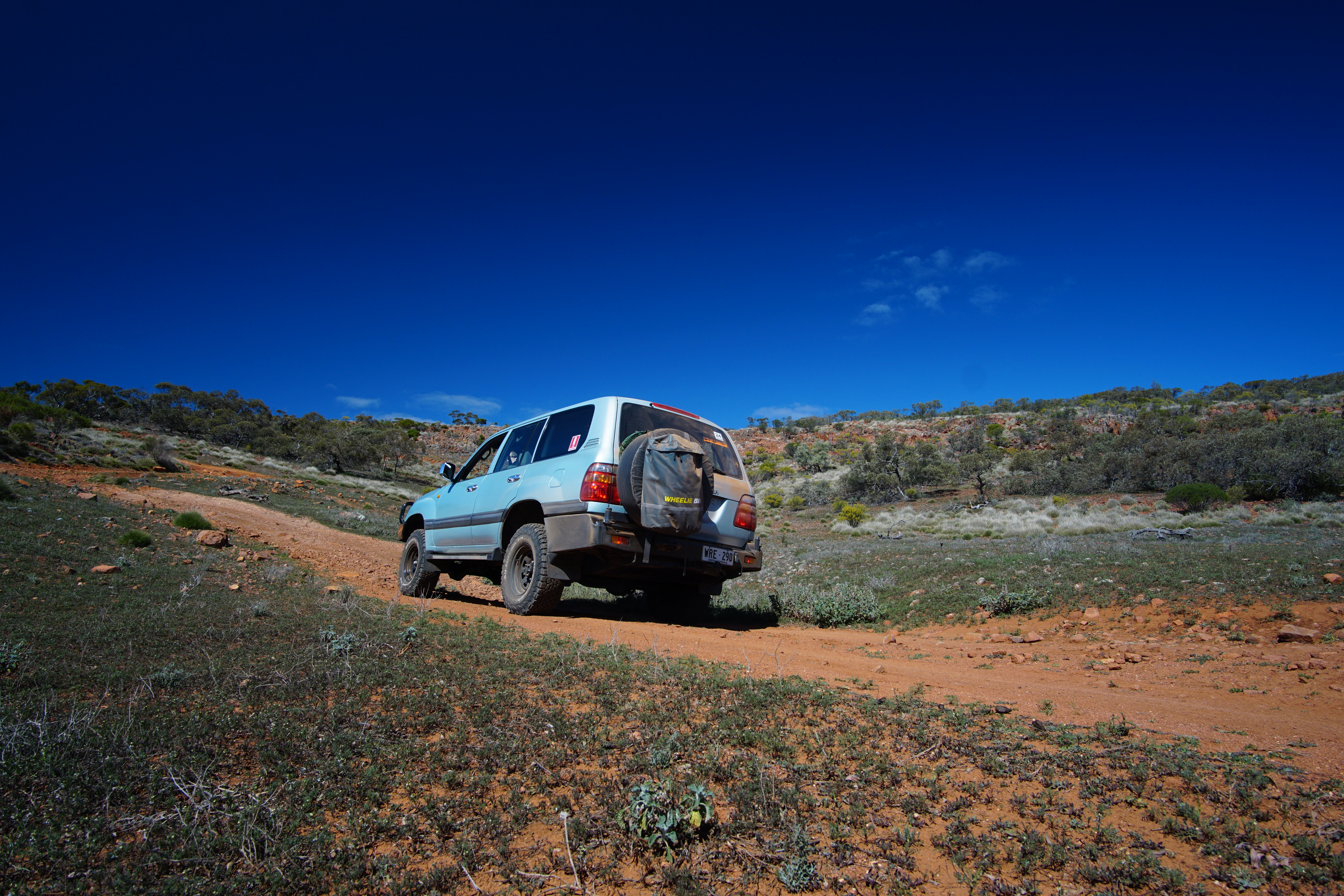 A detour to check out Kolay Mirica Falls, was a worthy side trek. Similar to the Organ Pipes area, but more accessible and more ground water. Including a well shaded pool at the top, home to many fat looking tadpoles. In a good spot to see out their aquatic time before all the ground water dries up. 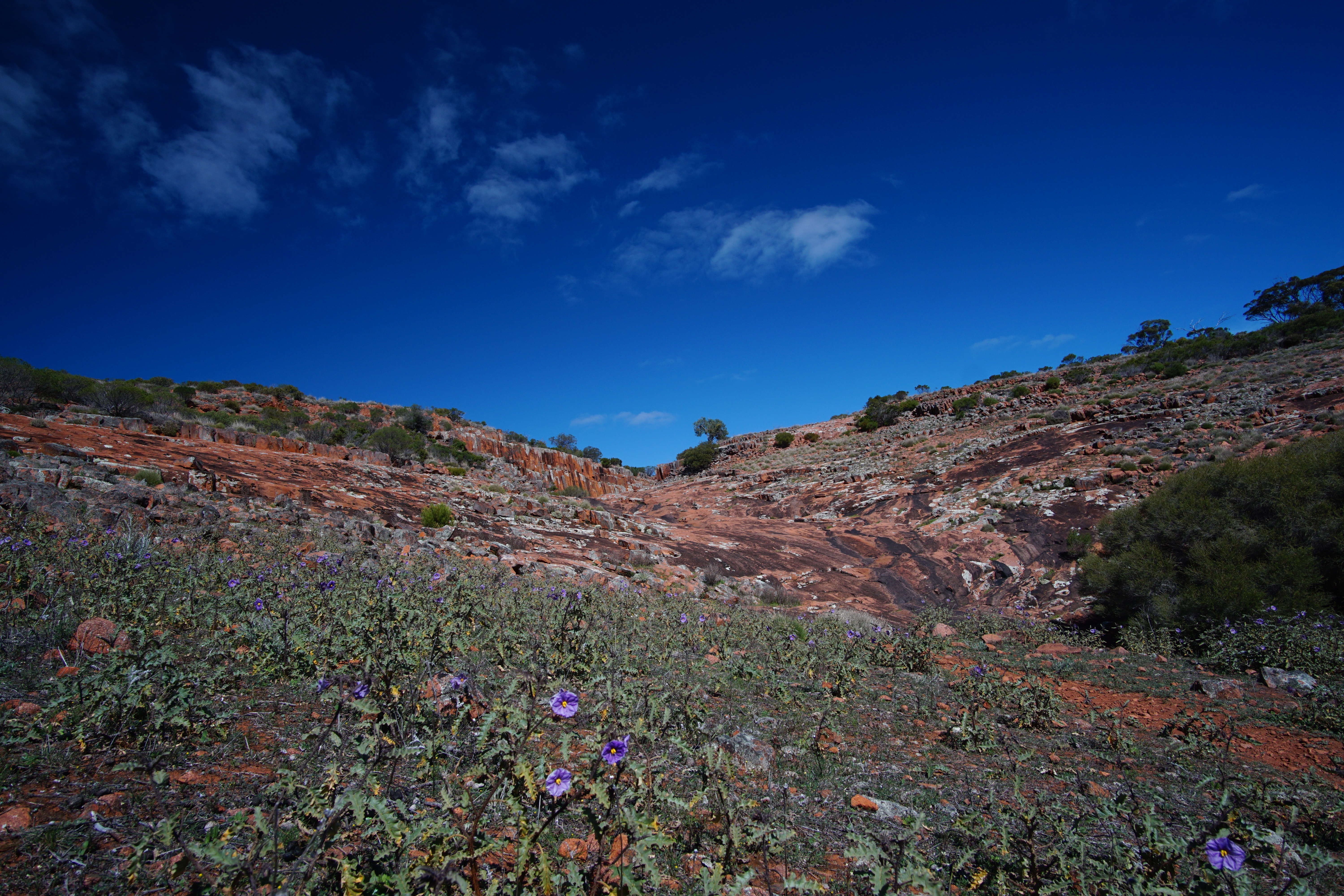 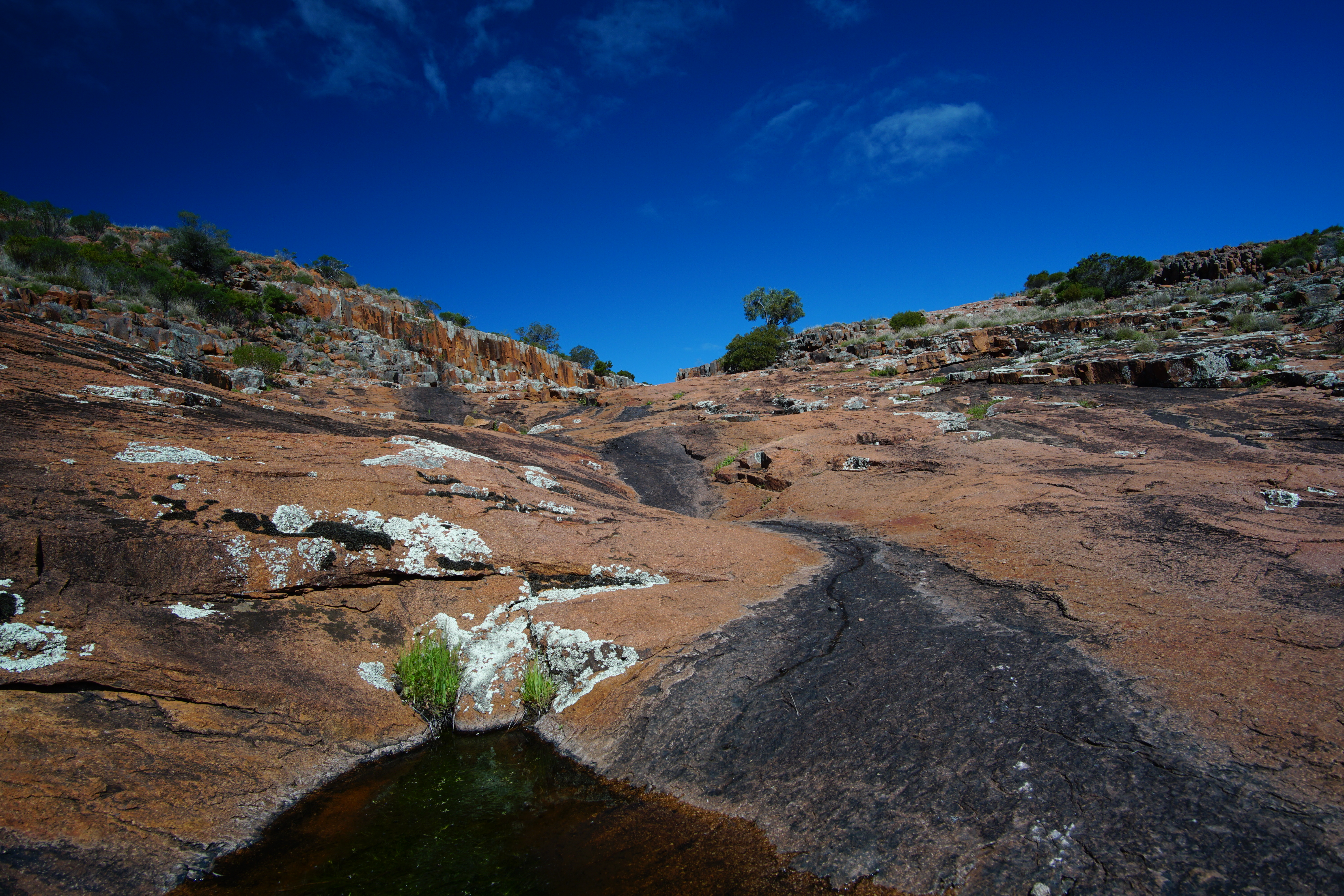 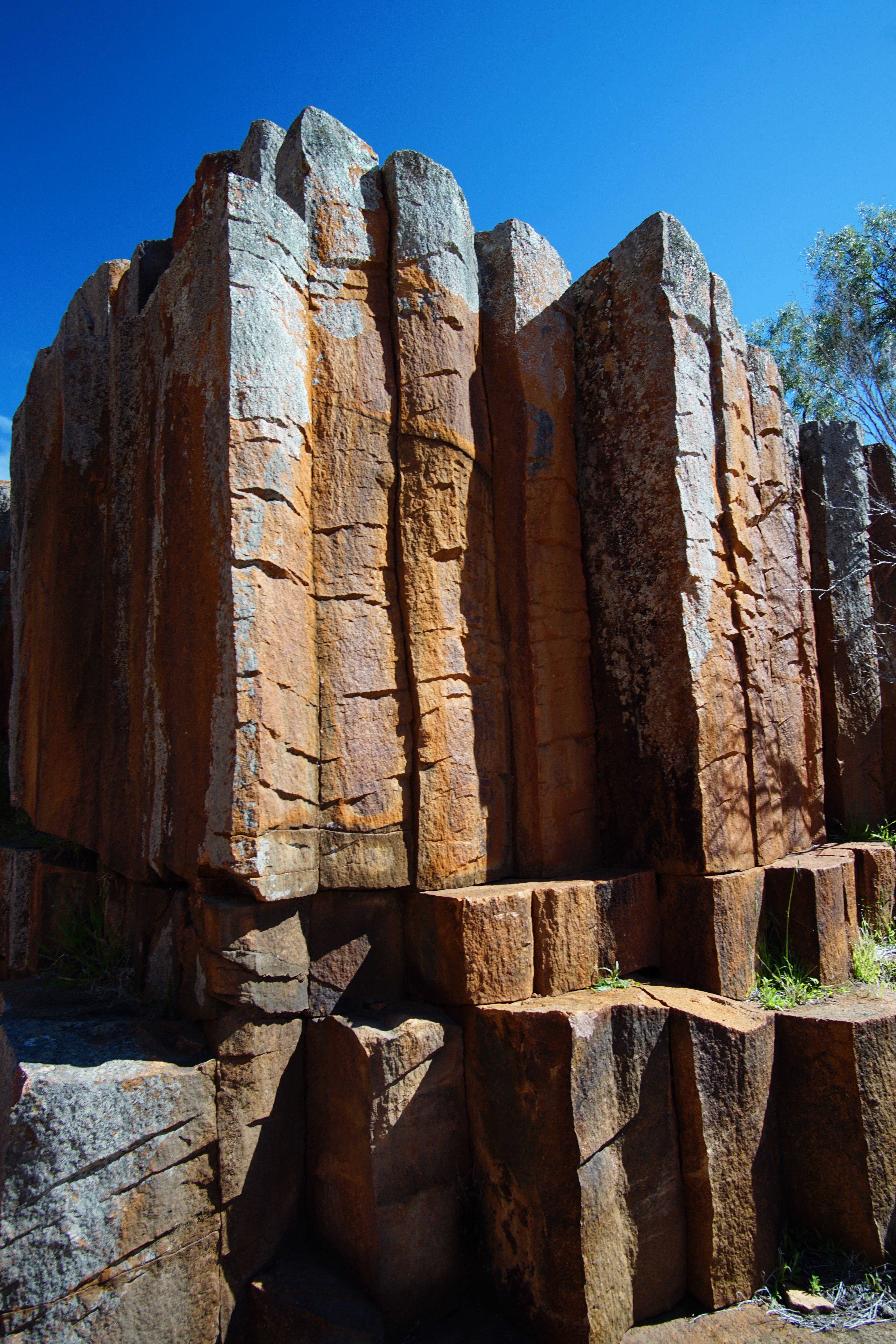 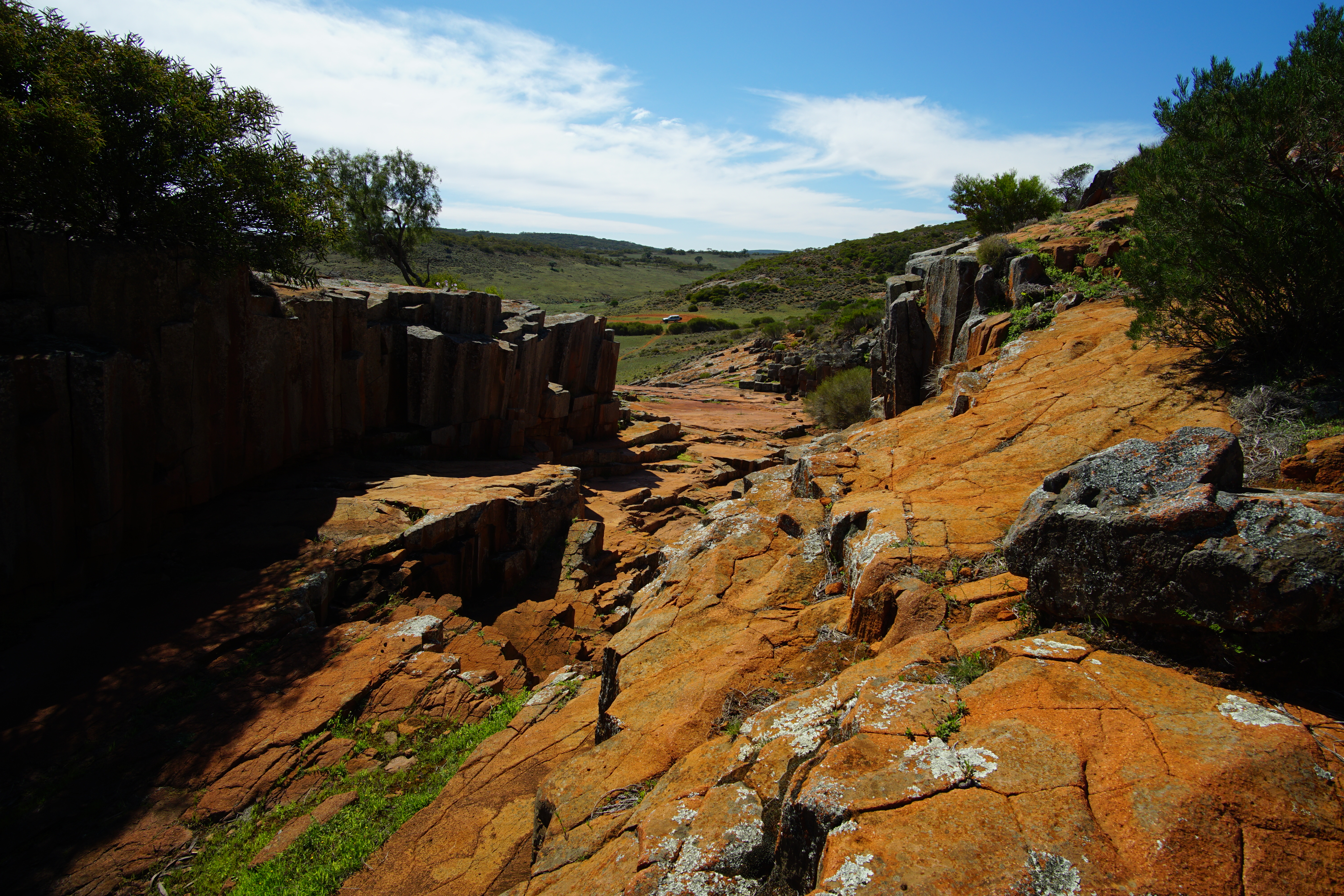 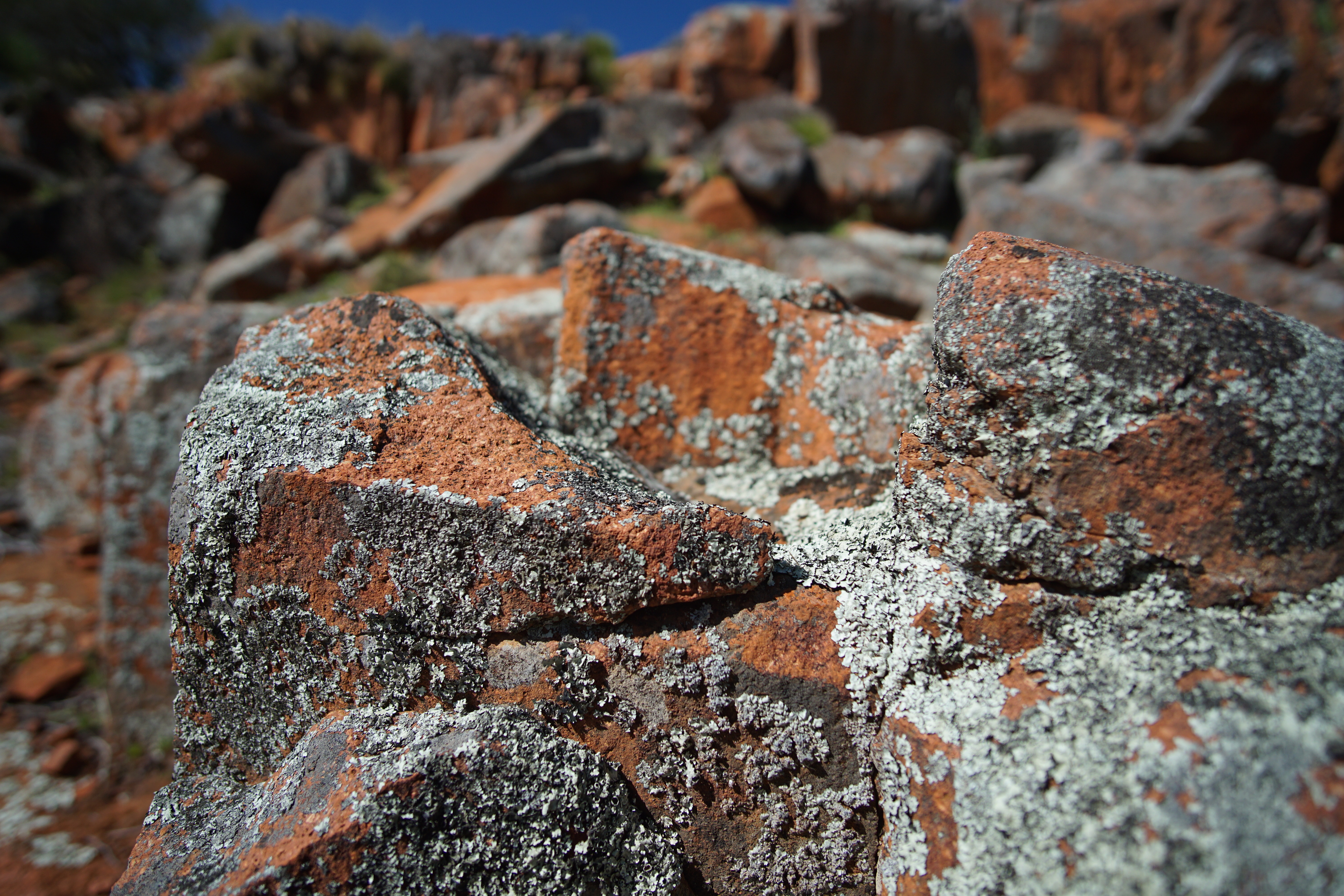 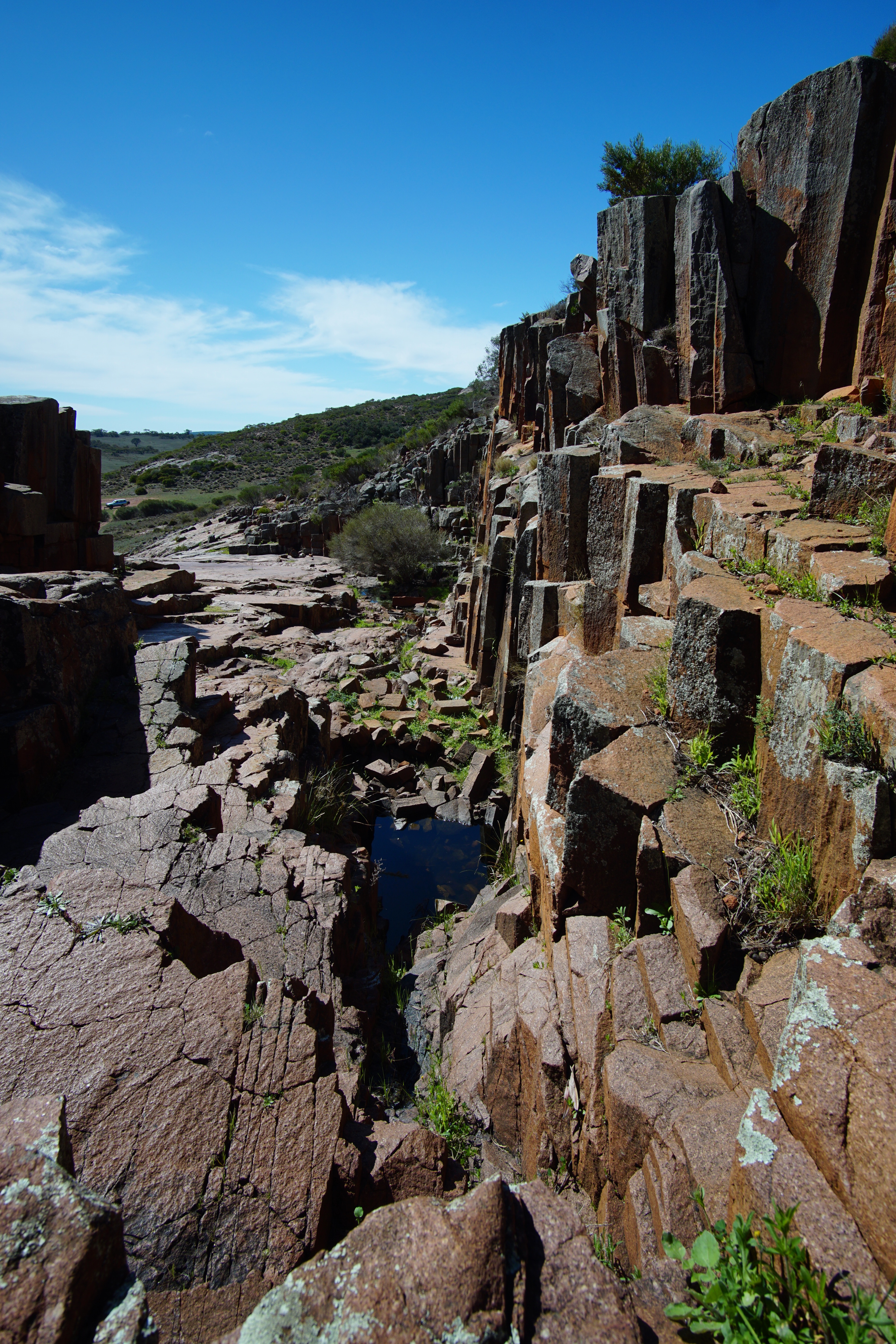 A treat as we headed back from the ‘waterfall’ N spotted something about 100m off the track, a wombat! Neither of us had ever seen one in the wild before, yet there he was, in the middle of the day. Stayed still enough to quickly stick on the long lens, get a couple of photos, and then a couple more when I got out of the truck before he decided I was close enough and sprung into action. 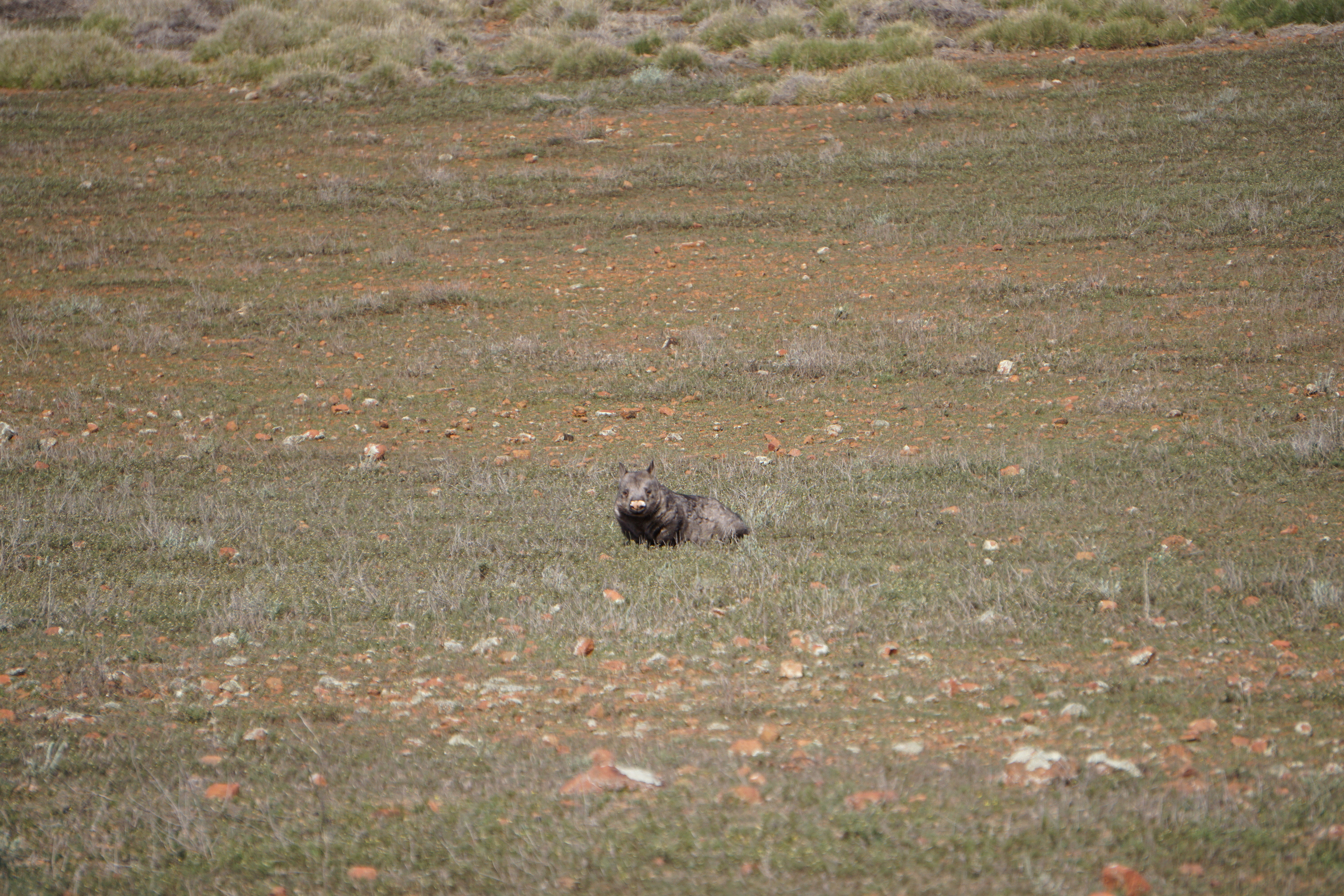 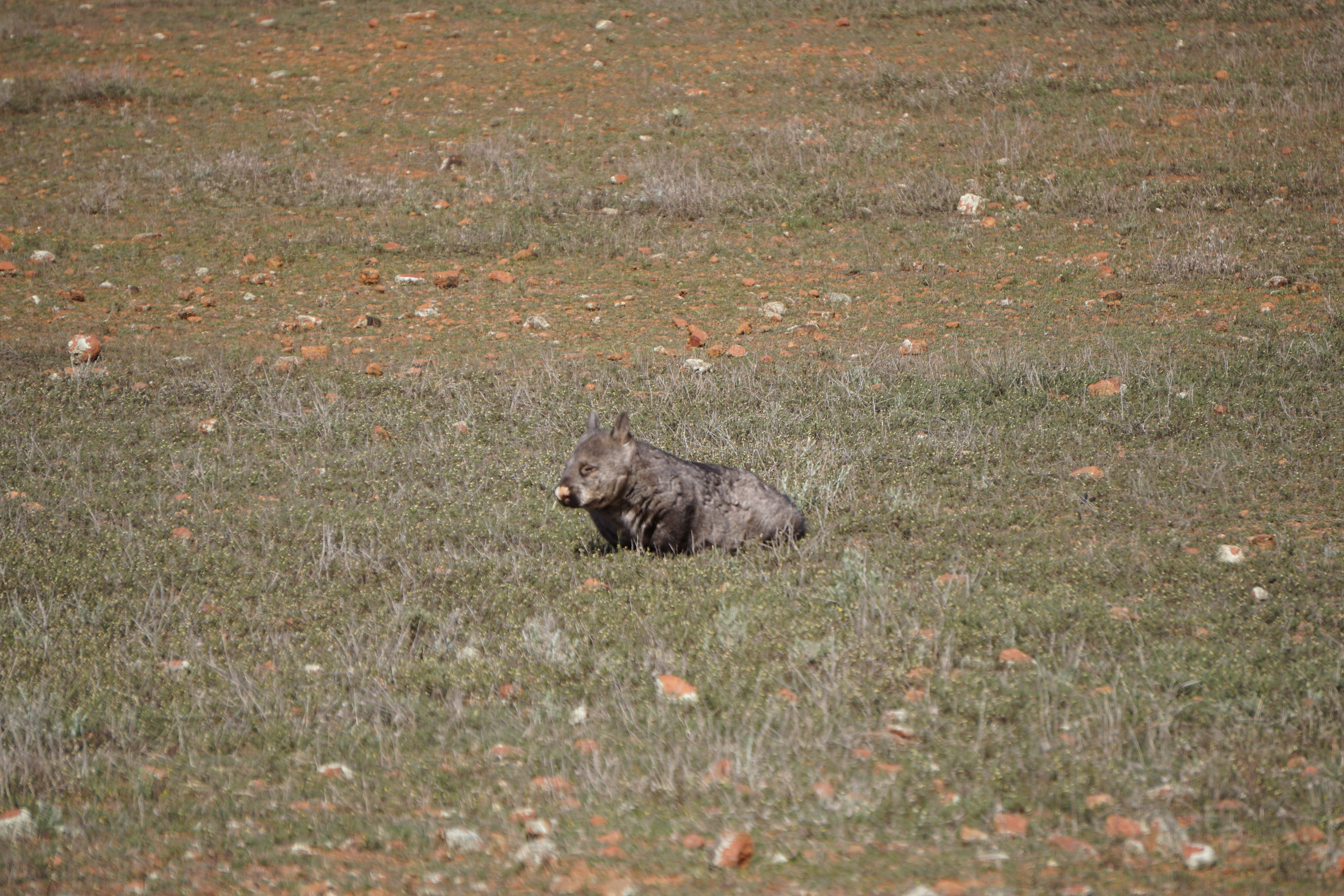 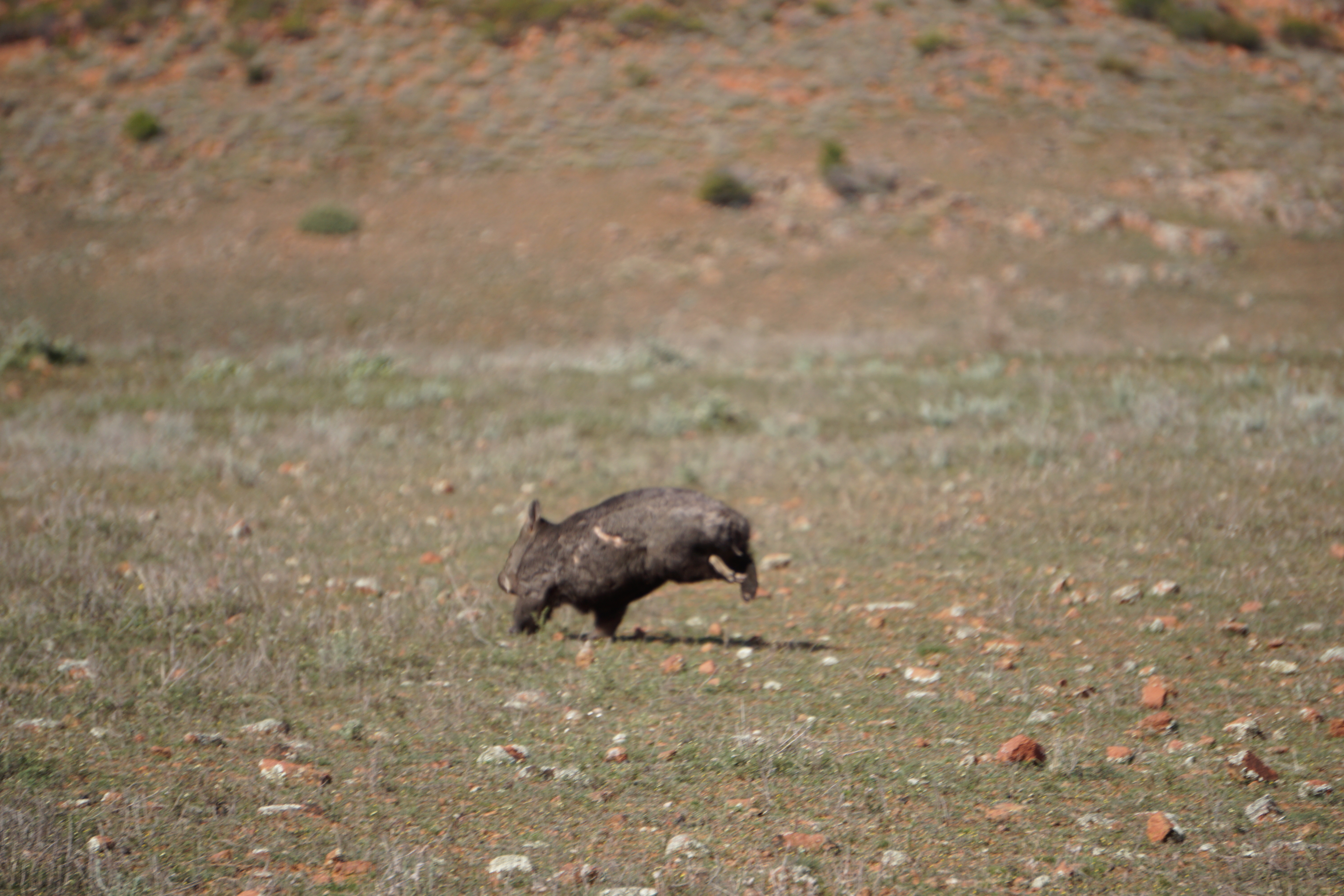 Looks like he might have been on the losing end of a fight over Mrs Wombat, maybe that’s why he was out up here and not further down the hill where the wombat holes were. 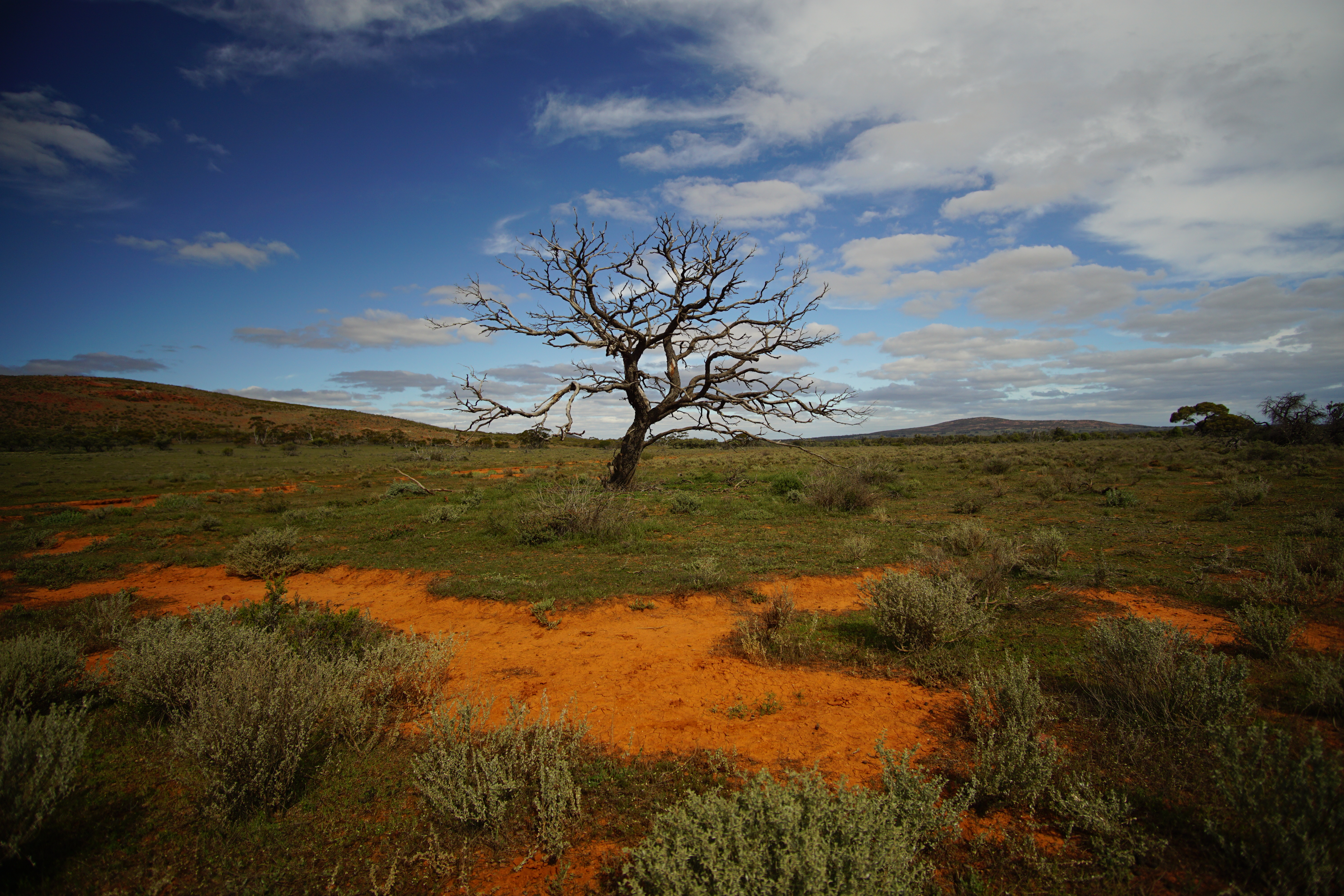 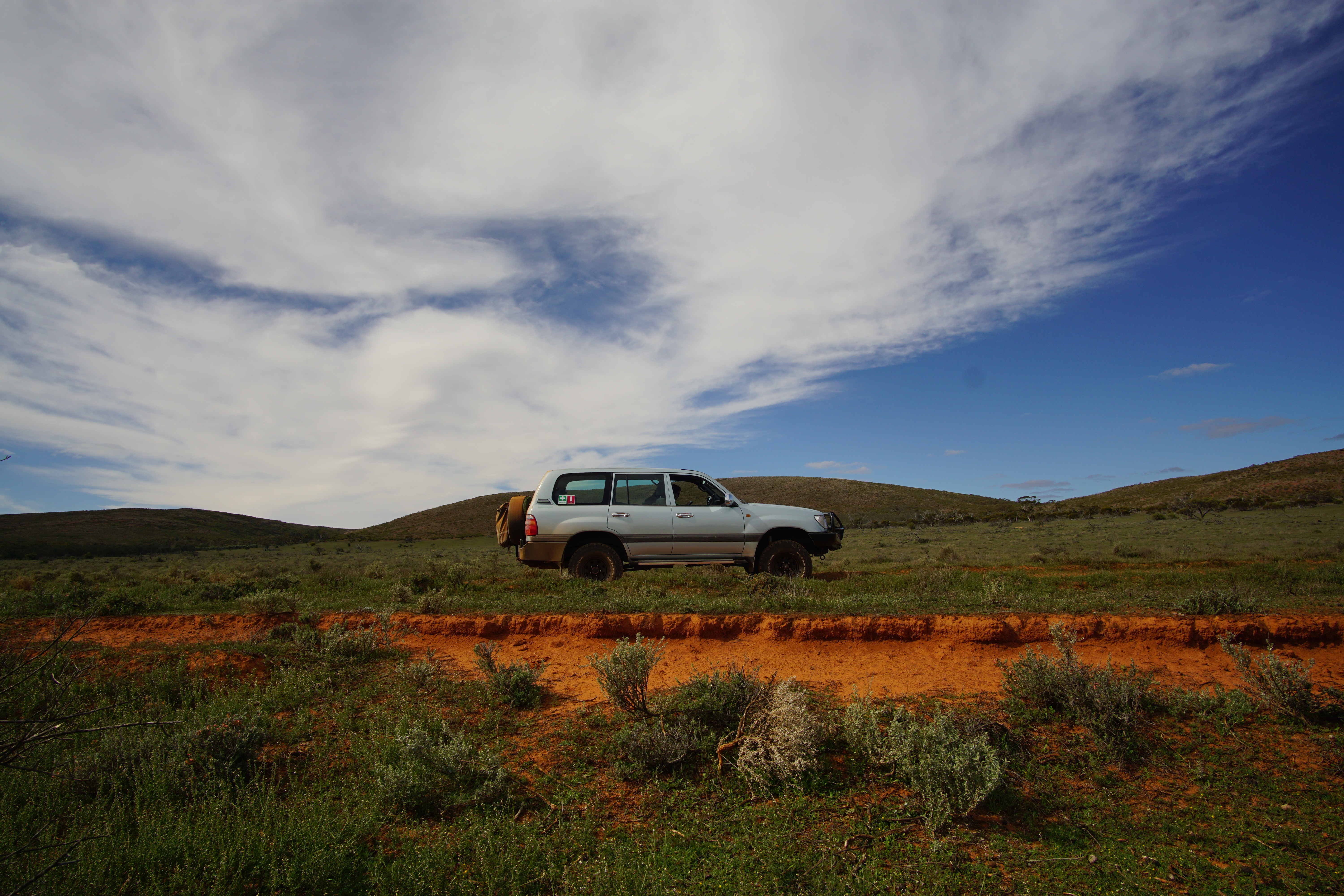 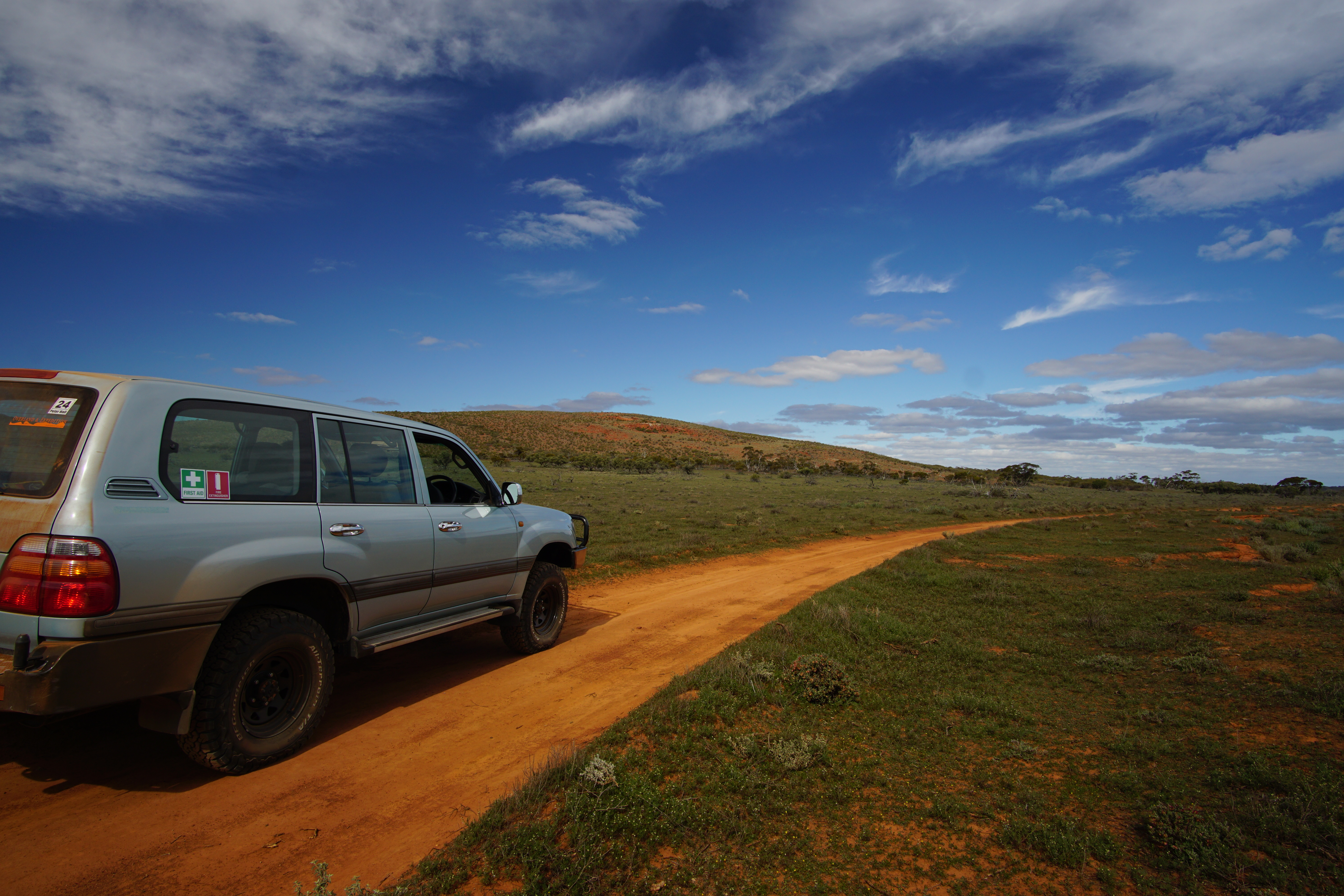 We meandered back to camp, passing three vehicles as we went, all within about a kilometre of each other. There was one other couple staying at the same campsite as us (although well away from where we were), and apart from that these were the first people (all Grey Nomads, who else gets to be out here on a Monday? Well us, I guess!) we had seen since leaving the highway, good stuff.

Back to camp in plenty of time, I had a quick afternoon snooze as that is what old men do, right?
Then started making a fire. We had a Moroccan marinated chicken in the fridge and that bad boy was getting cooked over coals tonight. That was perhaps the best chicken and salad we’ve ever had. A day in the outdoors makes everything taste better. 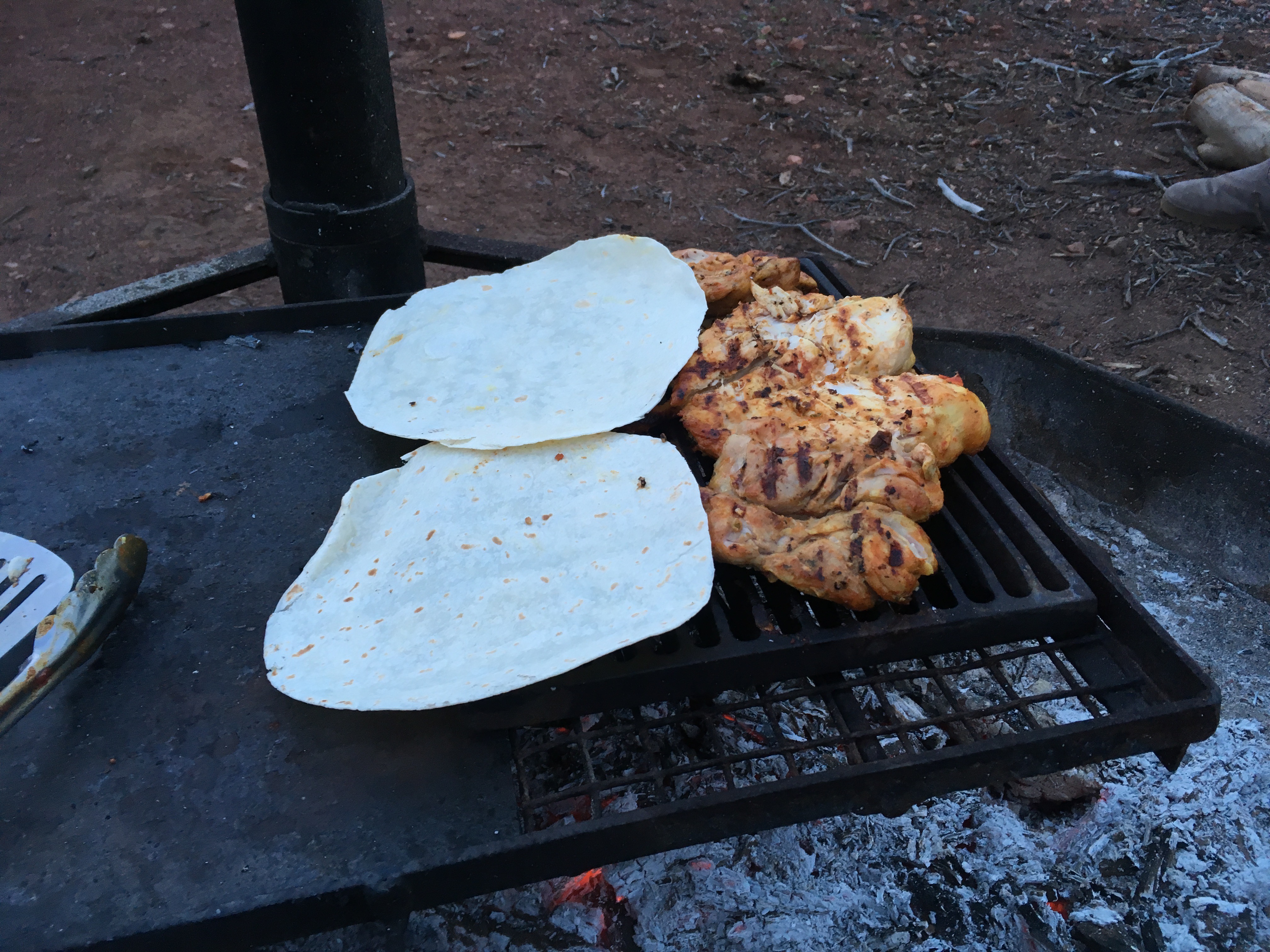