The next day saw us moving on. Despite some claiming I was setting some sort of standard for being organised beforehand, to be honest, that kind of went a bit to shit in the last week. The pile of stuff still to go in the truck kept getting bigger and I lost that nice feeling of everything having its place. Anyway, this would be the first test, packing it up and fitting it all back in. Well, maybe I was being too hard on myself, and it all went back together pretty well. We were already making some changes as to what went were, etc. This I was expecting, and is just part of the normal process of being on the road. What may seem like a good idea back at home might for any number of reasons not work out when you are actually doing it. All good, it is all a learning experience.

Before heading out there was a quick detour to the local ‘waterfall’. Where there were many wildflowers blooming. 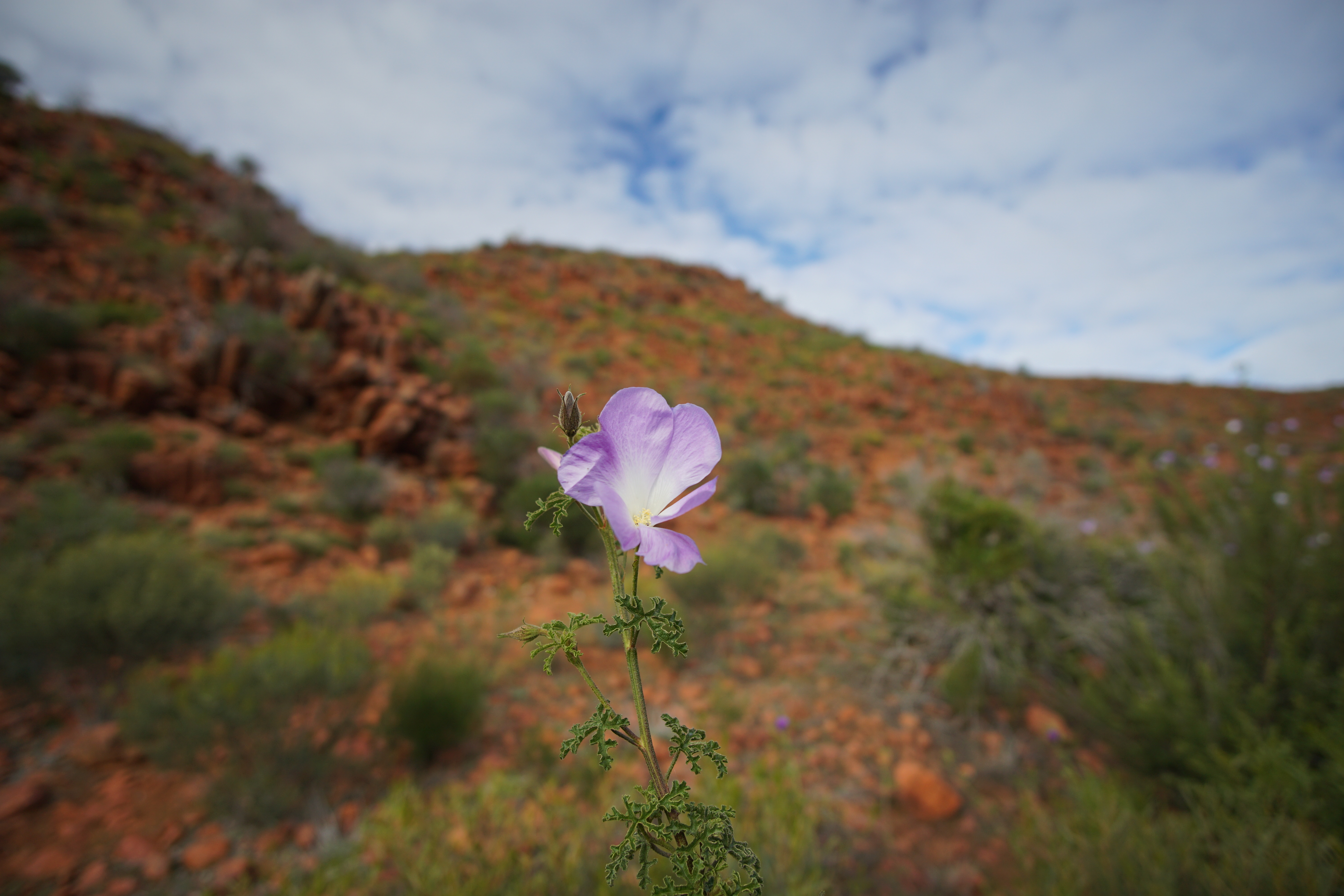 Driving out, on the rough and corrugated main track. Again we saw a ridiculous amount of wildlife. Two good reasons for taking your time, 10-30km/h was a good speed here. As we exited the national park and back onto normal council roads, there was a sign. 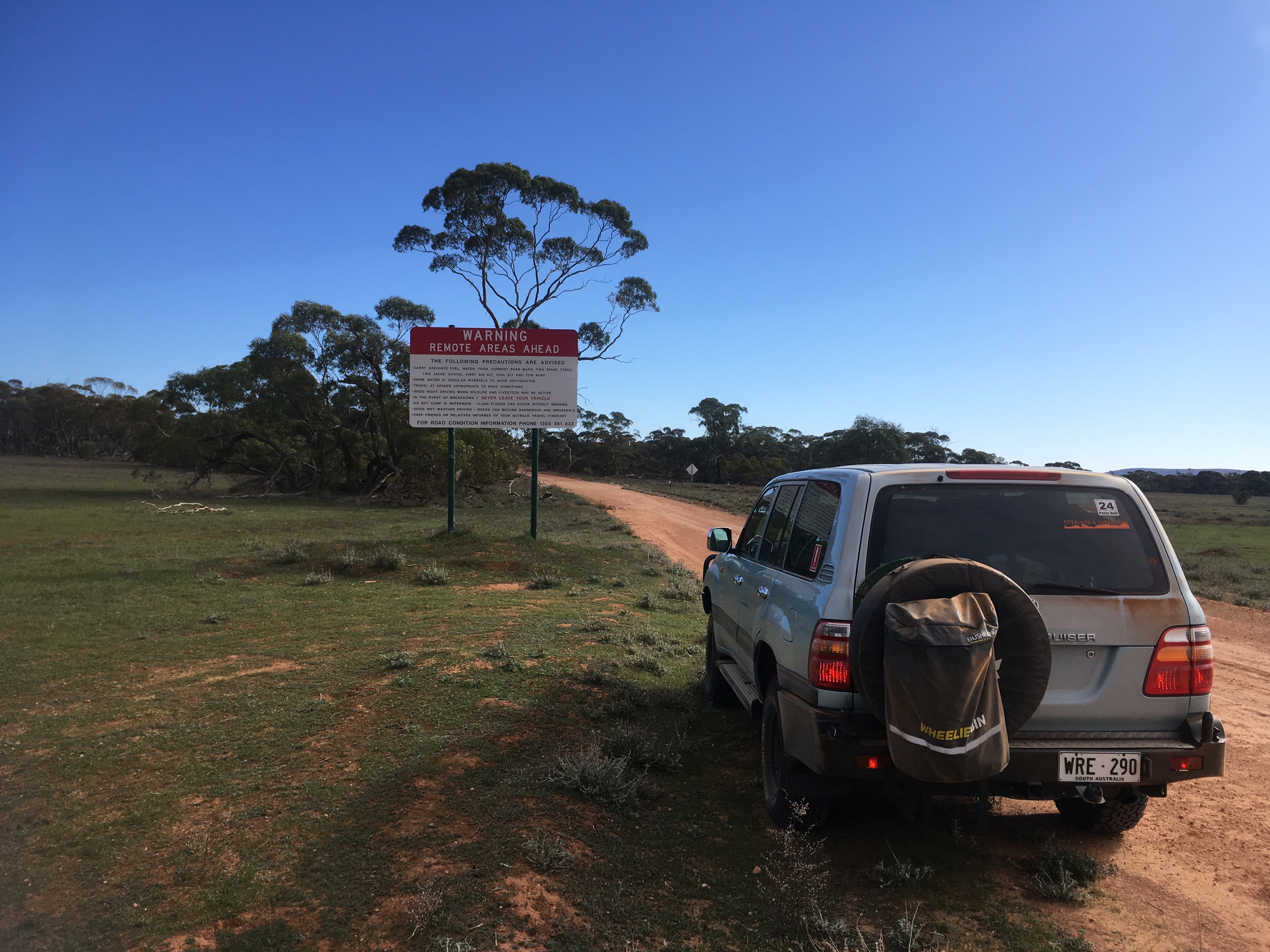 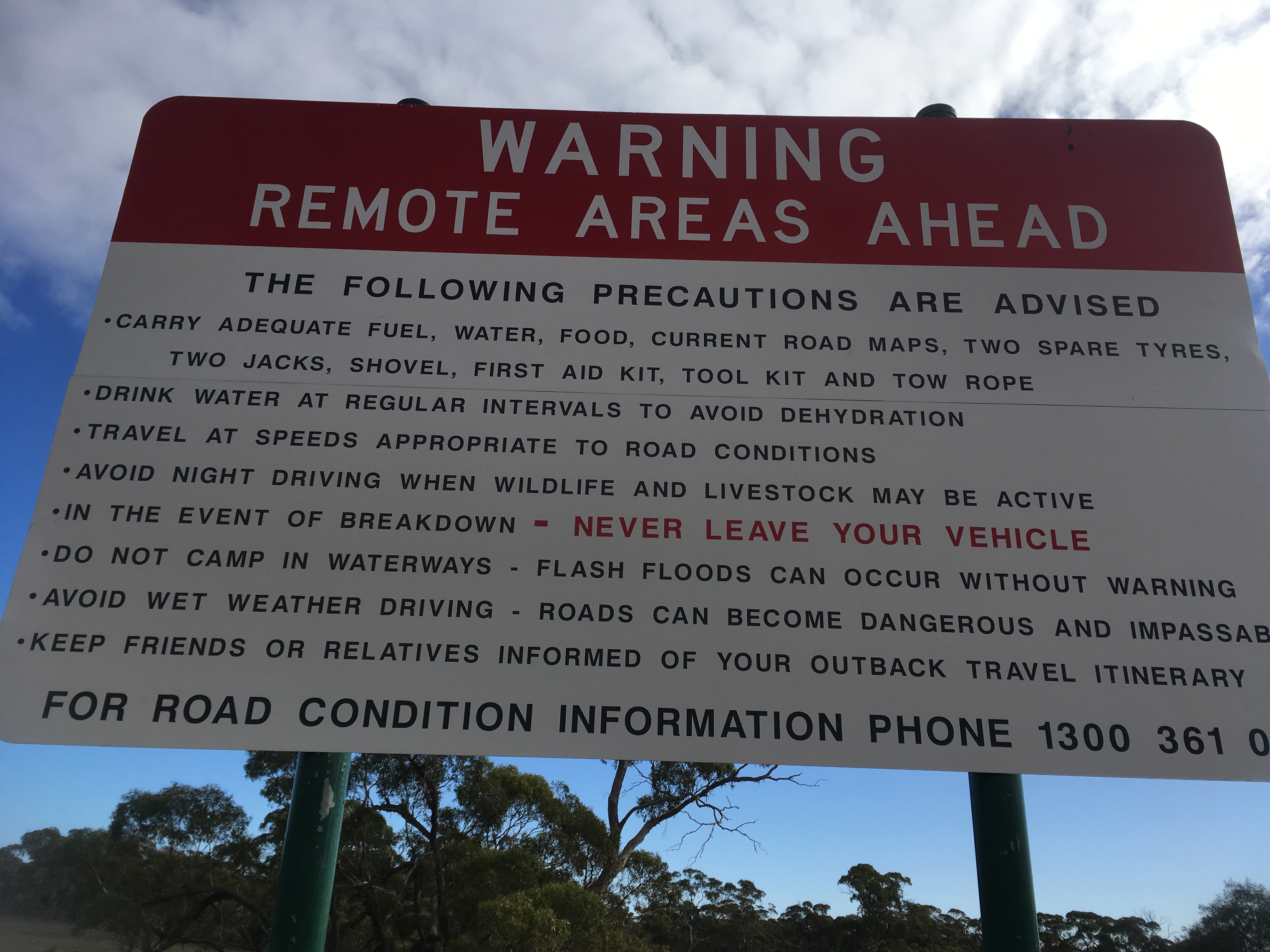 “It says we have should have two spare tyres” N said.

My hearing isn’t great at the best of times and it let me down again, just at that moment…

(for the record, I’ve chewed this one over extensively. The VAST majority of vehicles you see in the Outback have two spares, I saw one with three! And twenty years or thirty years ago you probably couldn’t carry enough spares. However, knowing the importance of tyres, and only ever buying the best means I have been lucky enough to never have had a failure on a tyre I bought in the bush [careful wording there kids…], not even a puncture (I’ve had punctures and destroyed tyres, but never on BFG’s in the bush. N killed one running over something that dropped of the car in front, cut it all the way down to the bead, but she still drove it home…) I check my tyres everyday off-road, and am forever messing around with tyre pressures to suit the changing road conditions. For this trip I invested in a comprehensive tyre repair kit and two inner tubes. Saving the weight of not only the extra wheel and tyre, but also the hardware to mount it to the rear bar, not to mention the $ involved. A compromise? Sure. But you have to start making them at some point. We are already at GVM, and I’m keen to get that down. So that was my ‘risk analysis’… Although I wasn’t quite willing to verbalise that, lest it come back to bite me…).

We pushed on. The roads out here are great. You really get that ‘outback’ feeling. Big, empty and varied landscapes, gives me that same feeling I got as a young man from the UK, driving that Ford Falcon, discovering the real Australia for the first time, a country of wilderness and adventure. 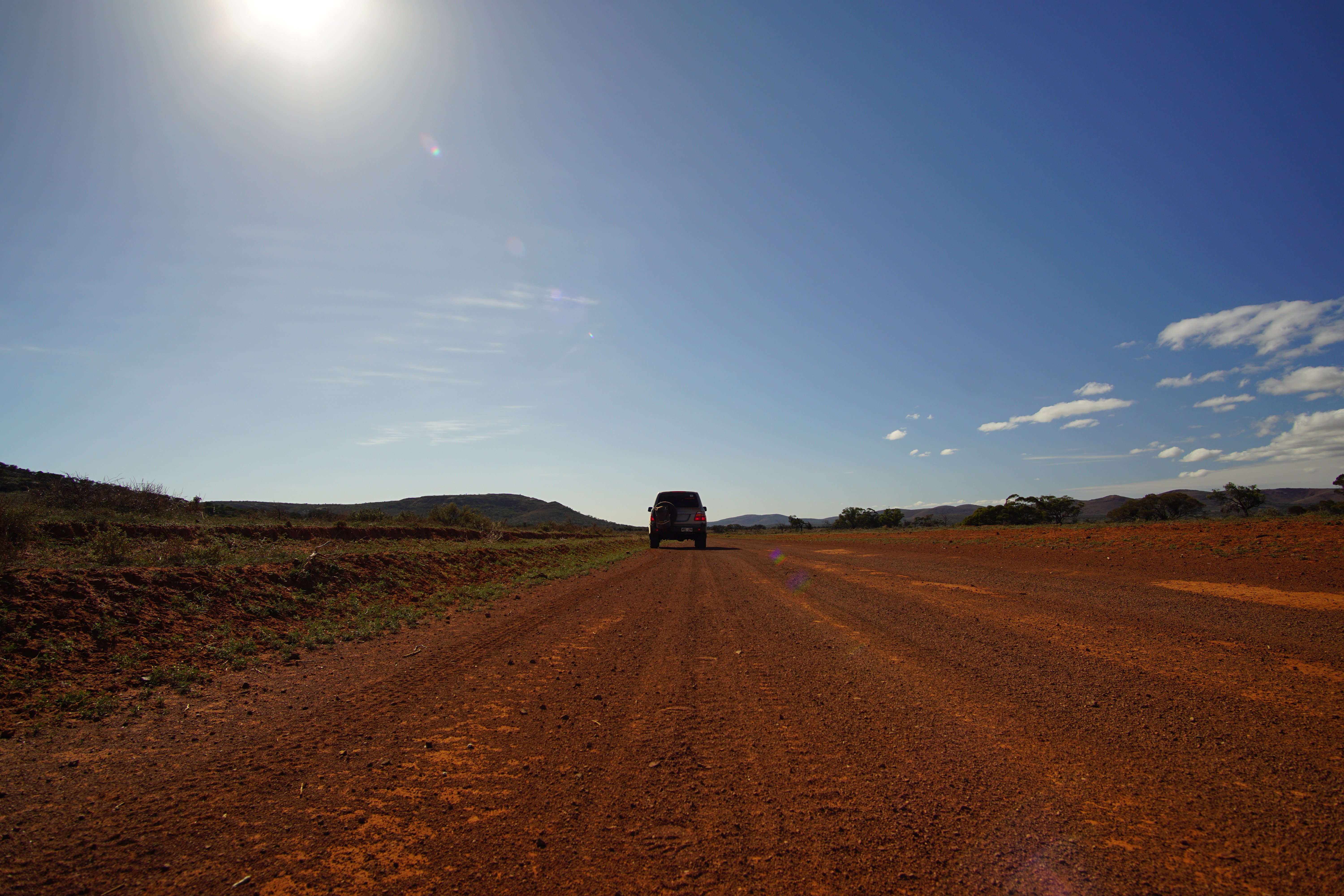 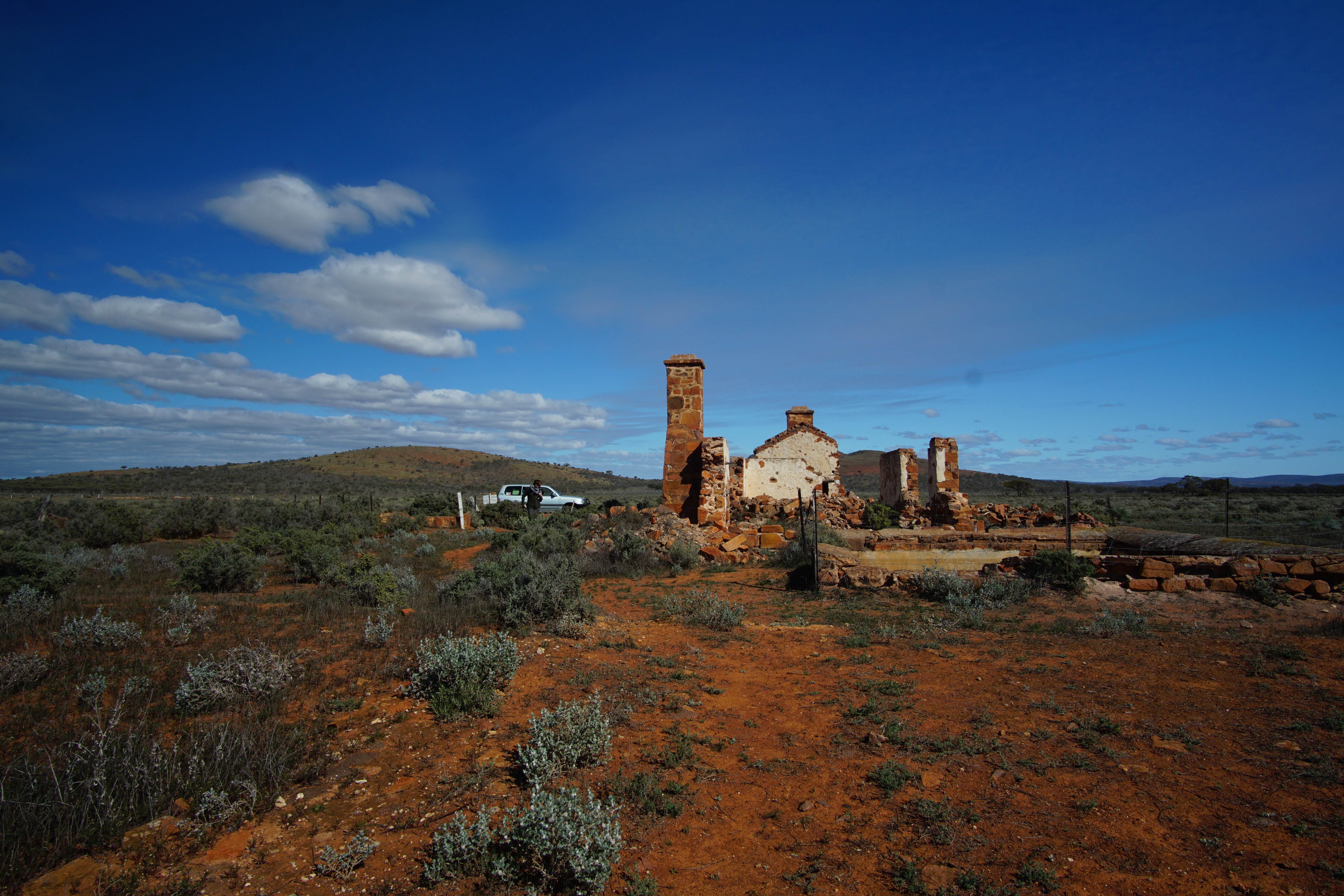 Sturt Desert Pea. This vivid flower is the state emblem of South Australia, once widespread, it says all you need to know that this is the first time either of us had seen one in its native environment, despite the many thousands of outback kilometres we have clocked upper the years. And, just here, these two on the outside of this bend in the road, that was it. None off in the scrub around here, none further down the road. So, a rare treat. Confirmed by the multitude of footsteps around this otherwise lonely and indistinct section of outback road. 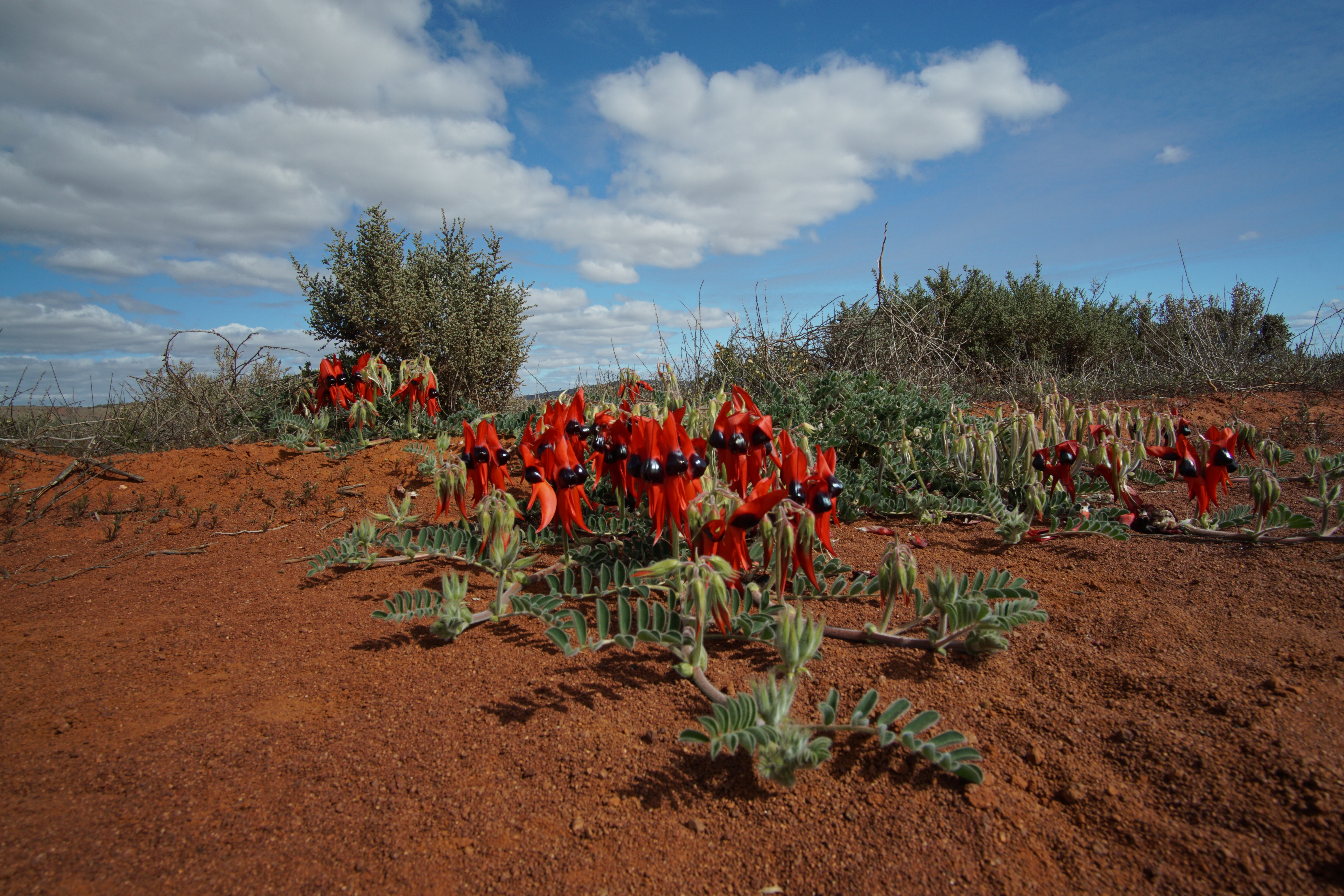 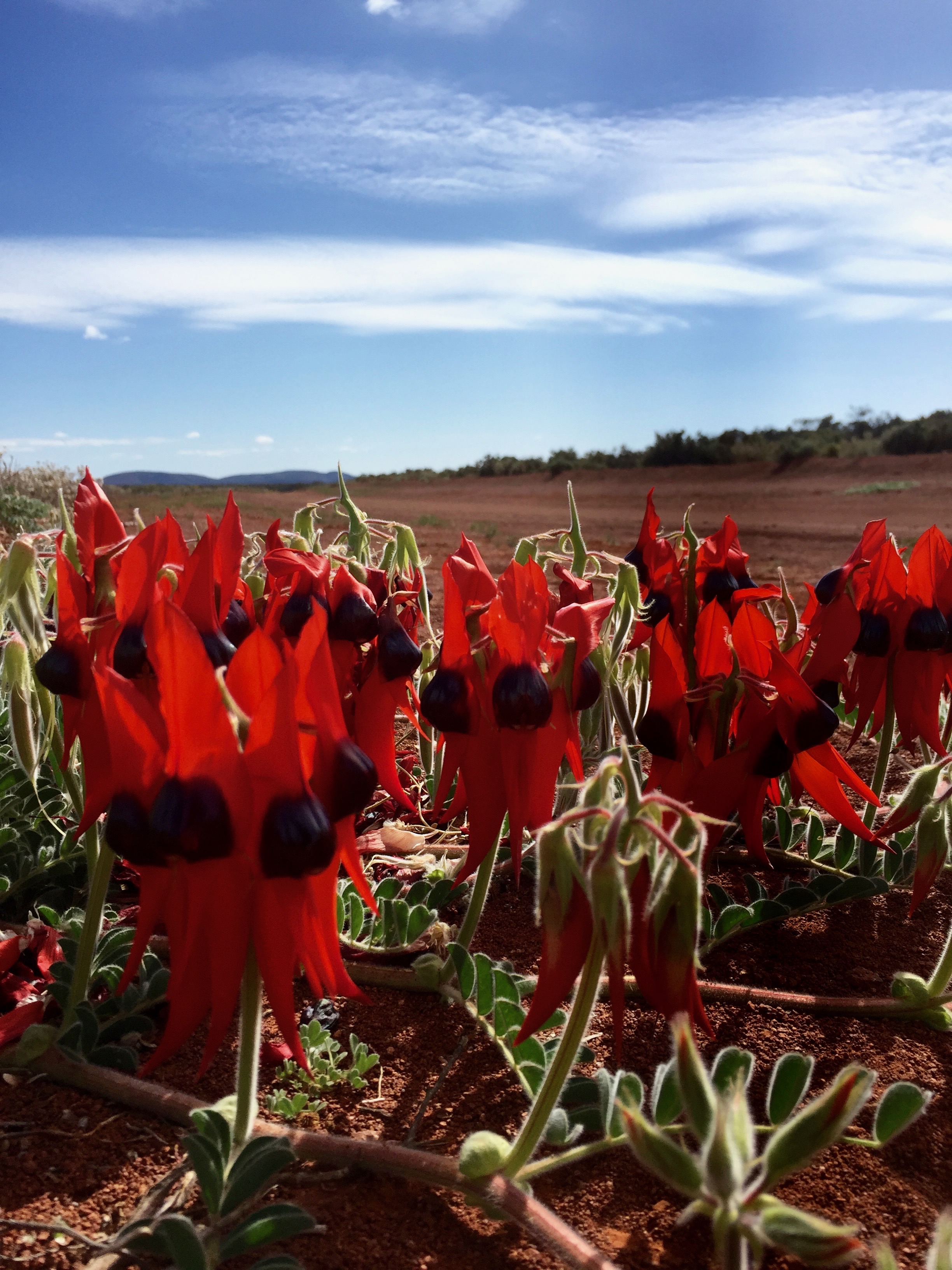 Onto to Mt Ive Station, this was to be our second destination on this tour. This was there only thing I had ‘booked’. A two night stay, camping with powered site. As with most things we can get by without power, but it is nice to give to have it there, no need to worry about running anything down. Plus top our water back off, showers, wash a few clothes, etc.

Mt Ive on first appearance appeared to be the perfect outback retreat. Sheds with various trucks and machines being worked on. Old farm equipment now historical art displays. A young French women called Melanie greets us, drawn here through the wonders of an advert on Facebook, working here to get her visa and see a real slice of Australia. Asking where I’m from in Australia, picking up on the remnants of my English accent. She explains about the pet kangaroos, Rocky and Leo.
With the run of the place we set up camp next to a bbq ‘hut’, just setting up the basics. No need to unpack anything that is already to hand. 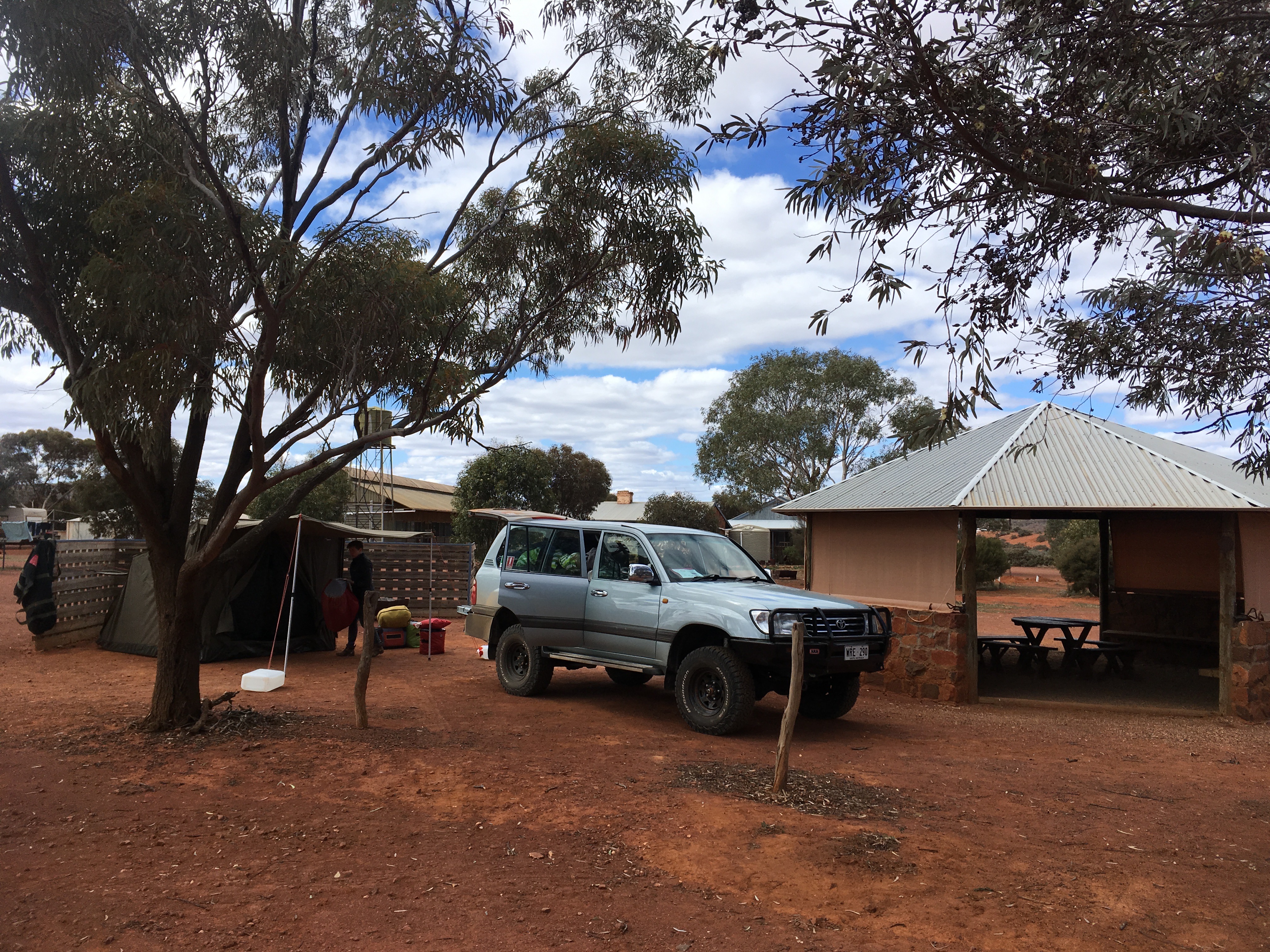 As we are settling in, and settling into the idea that we might be the only ones here, a coach rolls in… Many elderly tourists disembark for a spot of lunch, maybe we don’t have the place to ourselves. I chat to one of the old boys looking for birds with his binoculars. They are on a coach tour and this is just a lunch/bathroom stopover.

Next up we meet a chap in a hired 70 Series pick up. He’s a geologist, and warns in the next couple of days the place will fill up with workers coming in to complete a gravity survey, looking for density in the rocks, which in turn could be copper or gold. I’m not worried. One we are only staying a couple of nights. Two, it is interesting for us city folk to see outback industry in action.
Getting to know the locals. 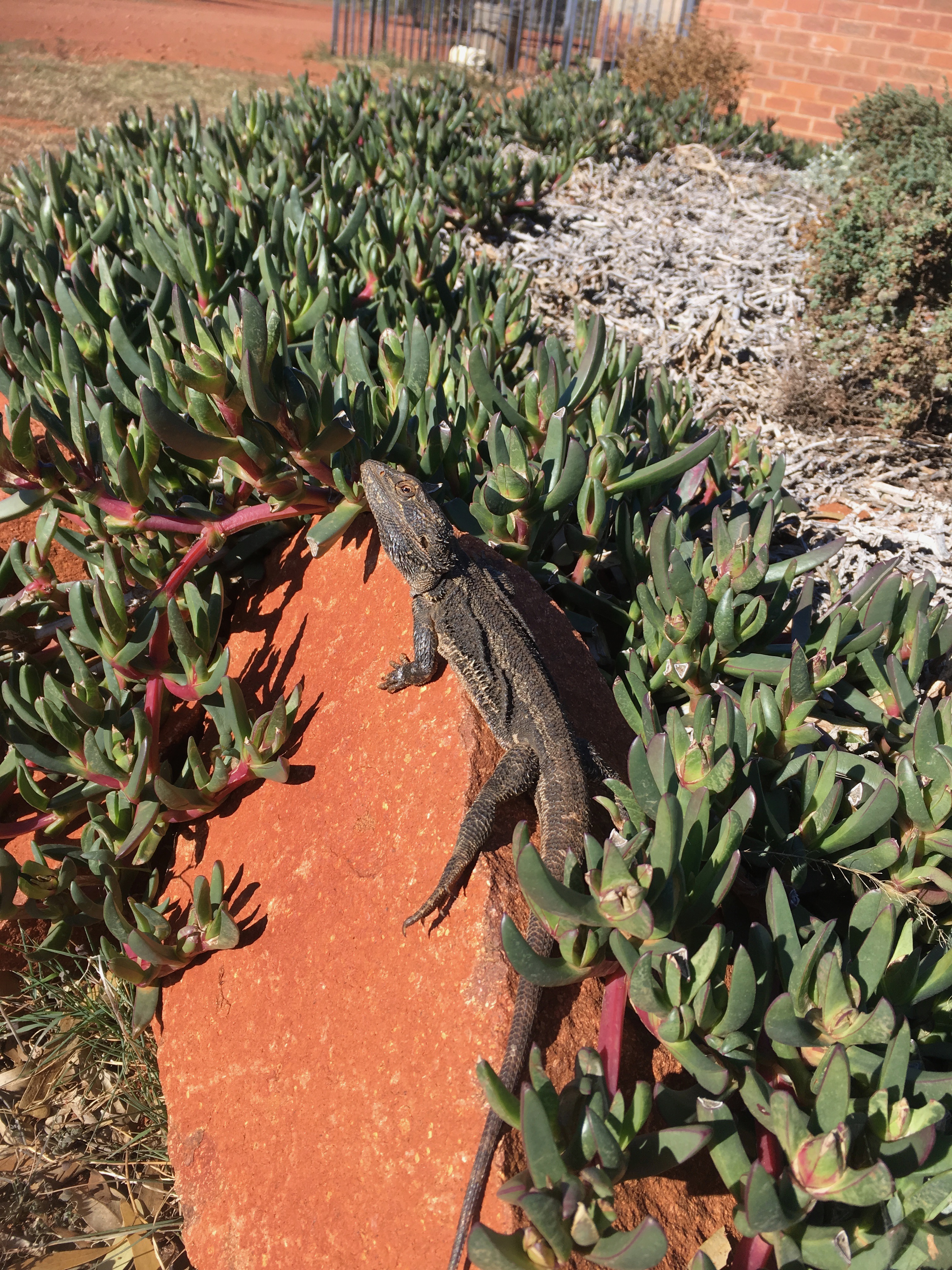 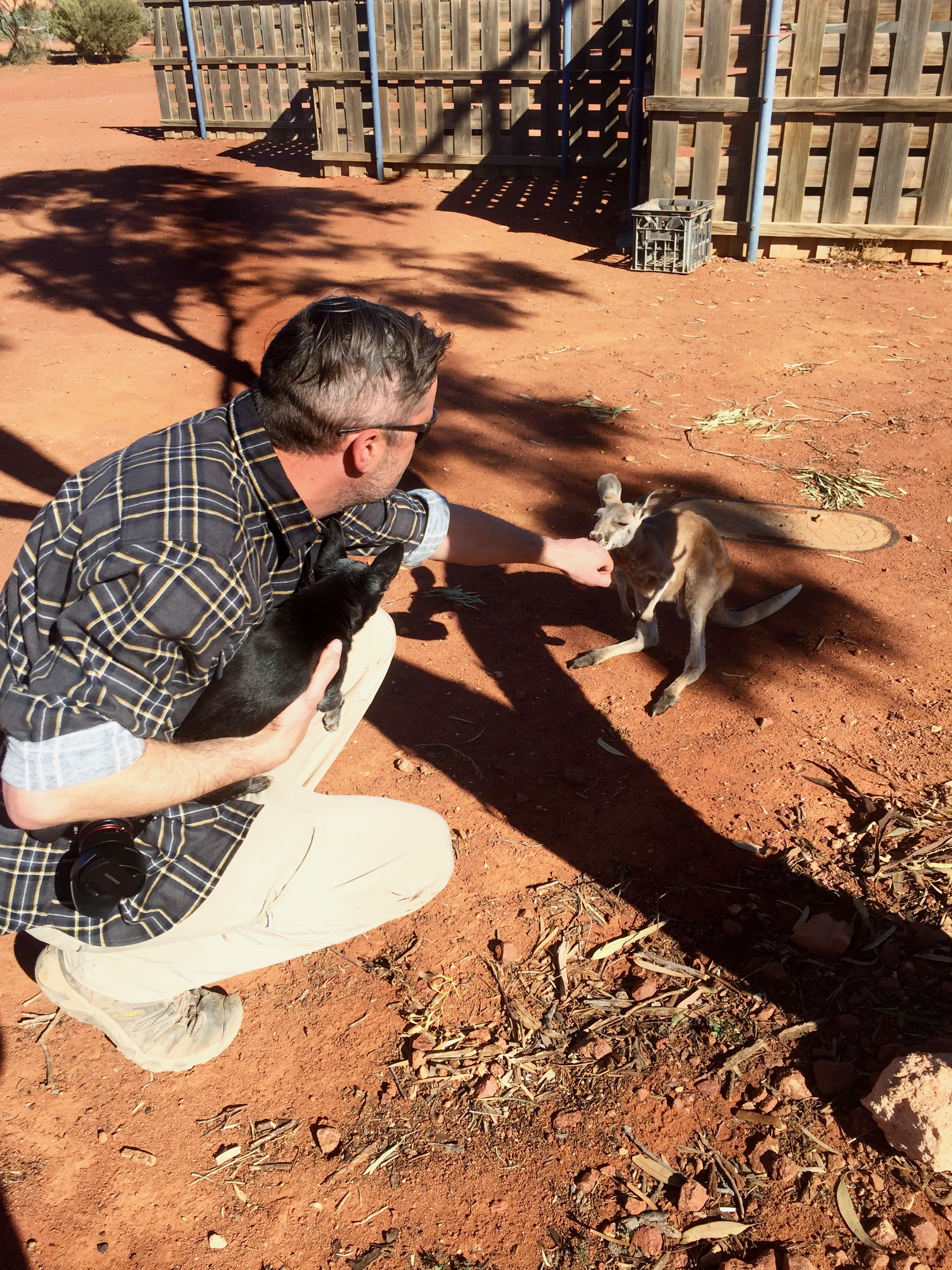 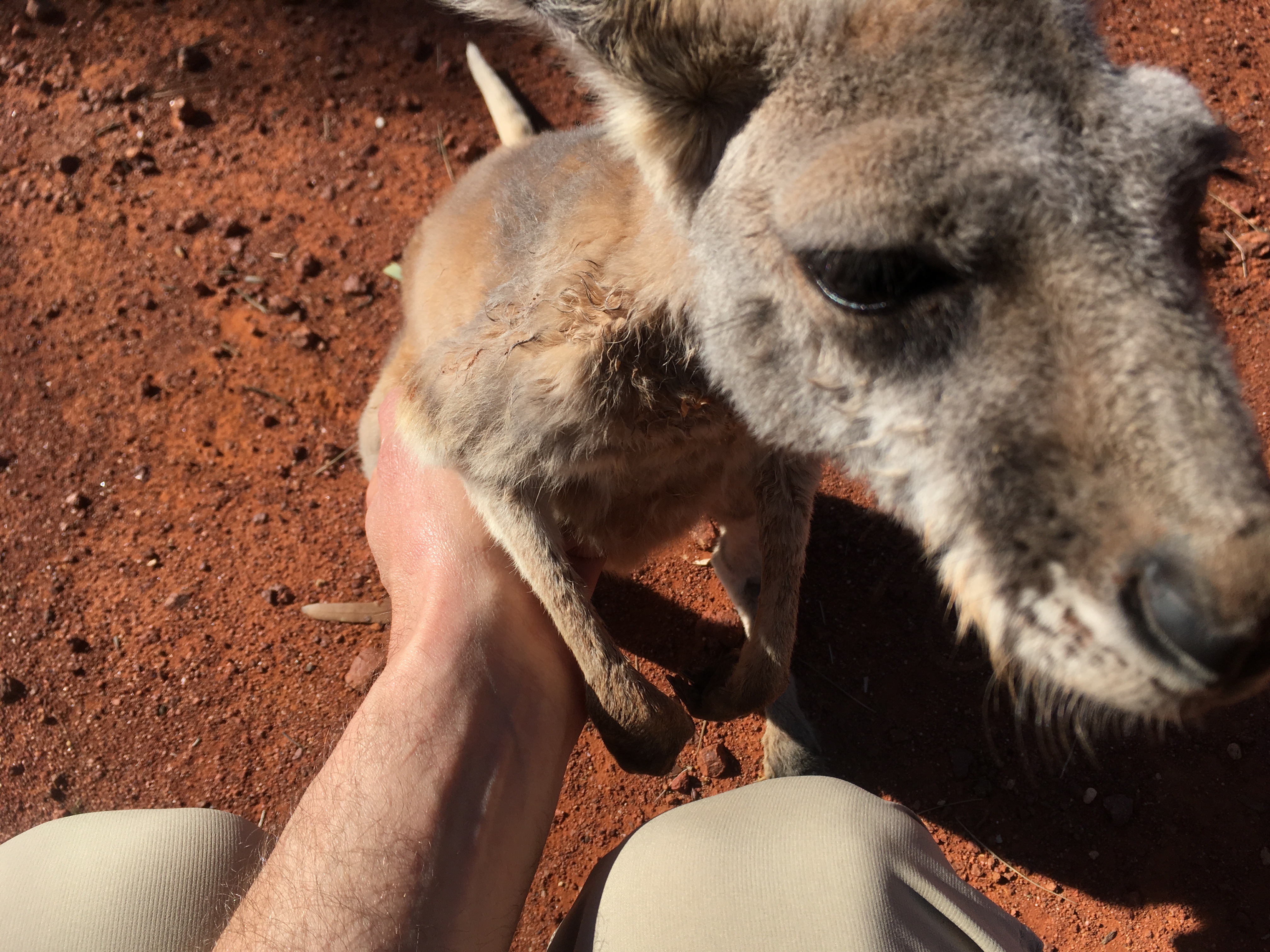 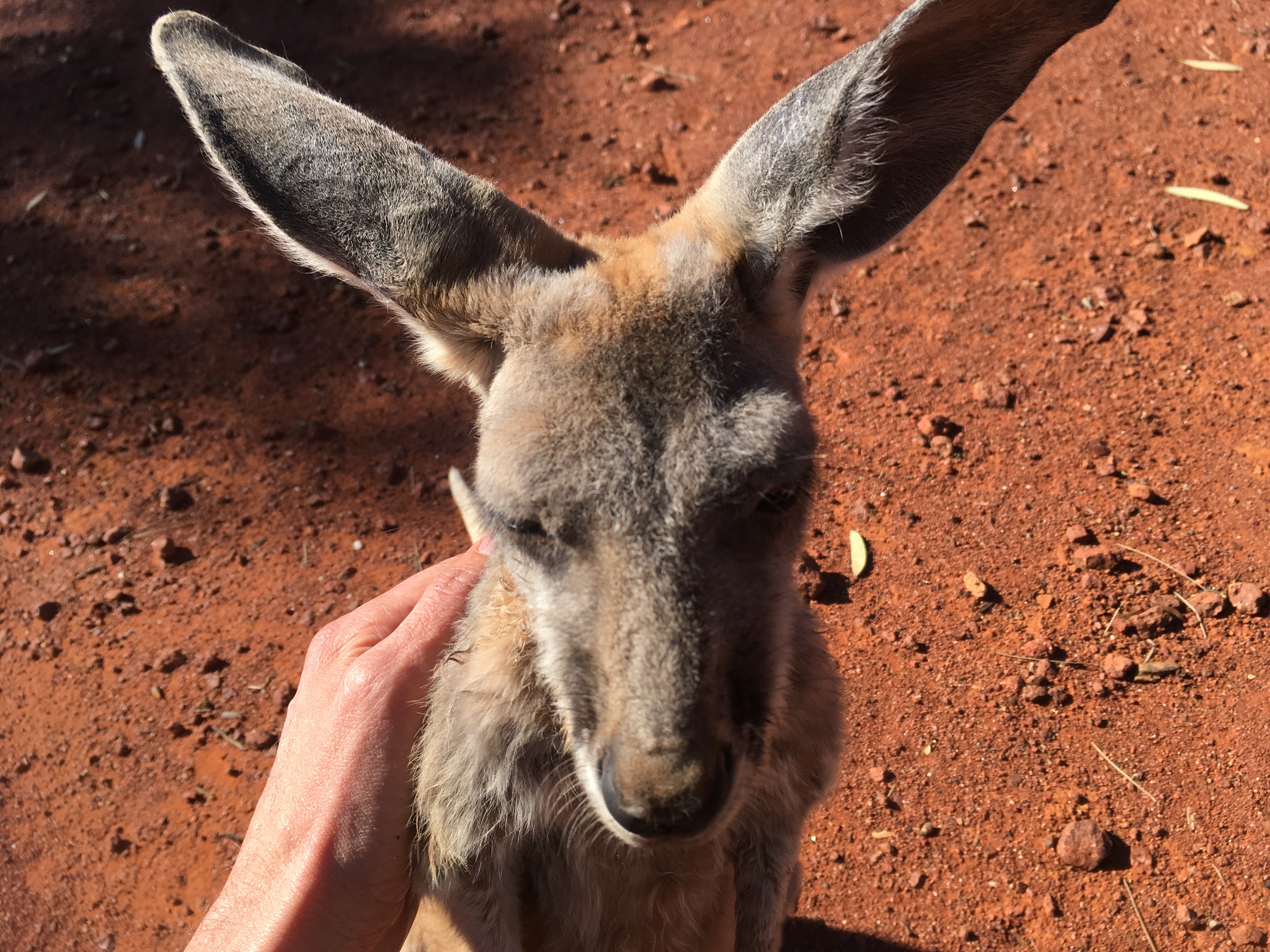 Enter stage left a Defender, with a young couple and mother in law (!) from Byron Bay, on the east coast, taking a (large) detour on their way to Kangaroo Island south of Adelaide. Where the mother in law’s parents used to man the lighthouse, when they first emigrated from Scotland.

Another mining marked 70 rolls in. This one towing a trailer with a side by side on board. The gold exploration team is starting to take shape. Busy place this middle of nowhere…