We left Mt Ive a day early. After spending a somewhat disruptive night listening to their generator cycle in and out once every couple of hours, which it would then run for about an hour. The first time I awoke to it running I thought a big rig must have pulled in late, so loud it was in the still of the outback night (to be clear, it has its own shed this generator, so I would imagine it is of decent size). After a while I began to recognise the distinct throb of a stationary diesel engine and worked out what it was (we used to run smaller versions for larger camps in the Army). A couple more of those episodes that night and despite joking with N about ‘oh, the serenity!’ it wasn’t hard to come to the conclusion that we had no real need to stay two nights, and ‘enjoy’ repeating that experience. Being quite self sufficient we could just carry on our way and stop where we fancied. The benefits of driving your home around.

I presume they ran off solar during the day and generator at night. It’s a shame Elon Musk hadn’t offered to build them a big battery for free…

Here are a couple of shots from around the property before we left that morning.

However, we were still going to take advantage of the private track Mt Ive has to Lake Gairdner, and I am so glad we did. The track takes you right to the lake’s edge, with just an unmanned research station for company.

This amazing phenomenon, bright white salt crust with crystal clear water just sitting on top, was a sight neither of us will forget anytime soon.

The lake might be accessible from the public road with a bit of effort, however it is only briefly glimpsed, and from far away, from the main dirt road. Well worth the small fee to use the Mt Ive track.

So we dropped our key and guidebook back to the homestead.

On the drive out we came across the Defender from Mt Ive parked up, by a recent roadkill kangaroo that we had passed a couple of times already, we pulled alongside “eagle spotting?” I enquired, knowing there was a spectacular eagle feasting on the dead roo “yes! He flew off and we are waiting hoping he comes back so we can film him” Defender girl replied, “well, good luck. I managed to grab a quick couple with my phone this morning but he didn’t want to hang around for the actual camera. Enjoy KI, safe travels” I said, “you too!” came the chorus back from the Land Rover.

So our rough plan was to follow our route north and hope to find a good spot to camp somewhere further on the trail. There was another salt lake, Lake Everard not far from where this road would join the main east-west arterial dirt road following the railway.

Things along that road…

We took this small side detour to smaller dry lake with some serious dunes behind it.

We pressed on, to Lake Everard, which wasn’t quite the shimmering vista that Lake Gairdner had been.

Anyway, it was too early to stop really, I started to think about pushing on to the start of Googs Track today. Of all my mapping only one map said there was fuel at Kingoonya, otherwise it would mean a 85km detour to Glendambo, on the bitumen Stuart Highway. So, if there was fuel a Kingoonya we would aim to camp at the start of Googs Track tonight, if not we would probably find somewhere in Glendambo.

The route in blue is ours, note the Google generated travel time! 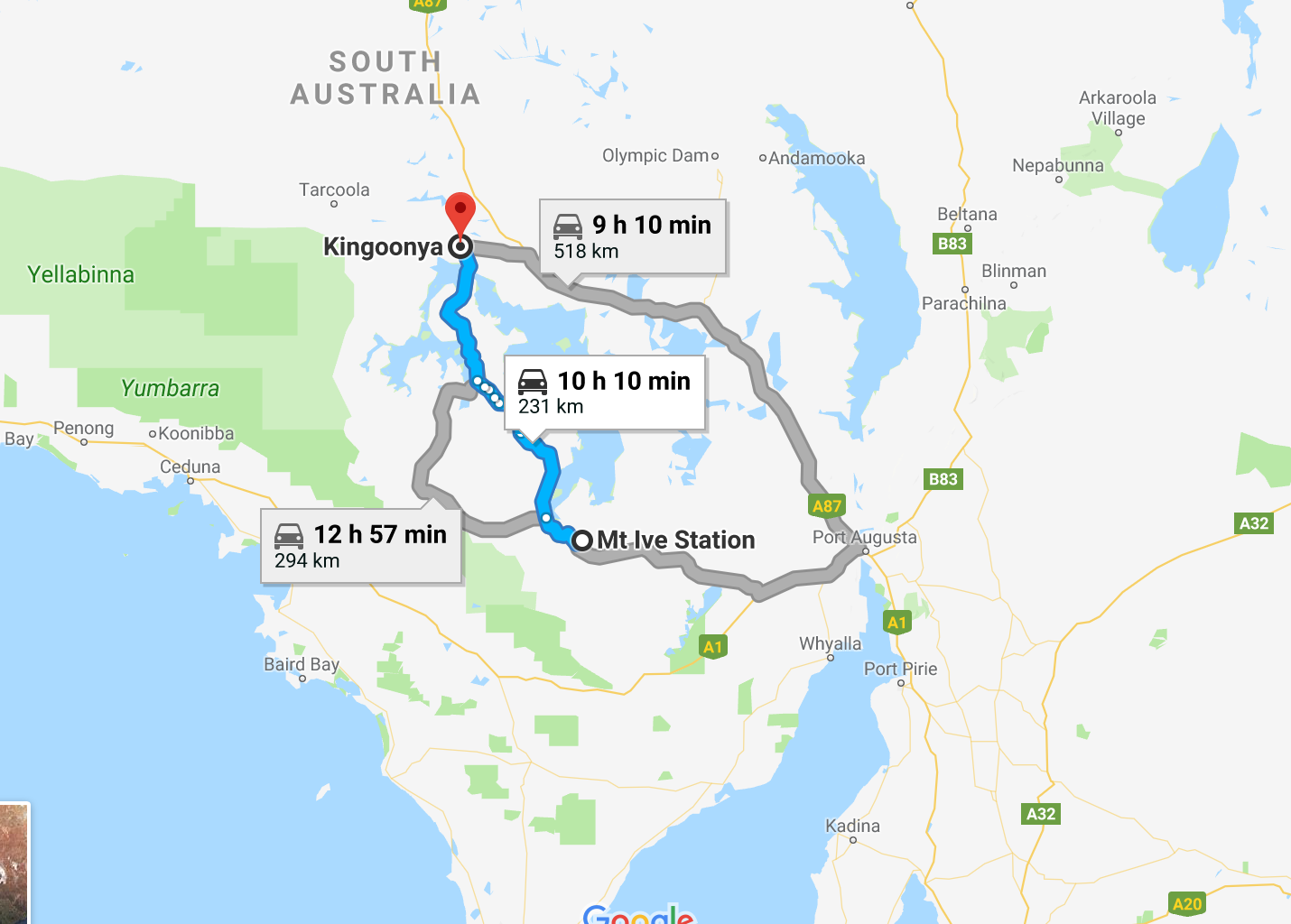 My paper Hema (Central Desert Tracks) map had shown U/D fuel sign (unleaded/diesel) in Kingoonya and this proved to be correct, in theory anyway.

One of the (very) few times having a petrol engine could be considered an advantage in the outback (as the vast majority of vehicles would be diesel, this gets taxed first). This just take what you need was a bit of an issue, my next stop was Ceduna over 300km from here, two hundred of which was unknown terrain and certainly would drain more fuel than normal dirt road driving. My main tank (90L) was still full, with some still left in the sub, in the end I took 60L, hoping that wasn’t cutting it too fine. This gave me the full main tank and a half full sub, 170-180L in total. Enough worrying, time for a beer from the helpful lady at the pub.

We enjoyed a refreshment and had a small chat with the couple who were bike touring (one BMW, one Triumph), day 19 on the bike, bless them.

We hit the road, knowing we would be arriving at camp, wherever that turned out to be, somewhere around dusk. Not quite time for a light-bar and spotties, but late by our normal planning “won’t be the first time or that last” stated N.

Through the ghost town of Tarcoola, we pushed on the rough and rutted road as fast we dare with the shadows getting longer. N kept an eye on the iPad while I watched the road, I’d marked the start of the track with a pin drop, while we were at the pub. We found the turn off for Googs Track. More CRAZY corrugations at the start, but we were straight into bushland, I said to N “we either camp like right now or I have to stop to let some air out of the tyres” so we pulled on into a little clearing.

To prove that despite carrying all this ‘glamping’ gear, we can still do a quick and dirty camp set up when required. OzTent, straight up, no pegs, awning flipped over the top. N sets up the bed while I smash out a tailgate curry. Supa dupa.

You can resist, but (short of a caravan) sooner or later you are going to be up with the sun and to bed with the sun. Needing to unwind after a big day of concentrating driving on some pretty rough roads, I sat up with the stars and a drink for a while. We could actually here the freight trains on the Trans Australian Railway, we were probably only a kilometre from the train line. However it is a much less disturbing noise than that old generator. So we slept pretty well.