Up to a spectacular sunrise, plus a double rainbow. 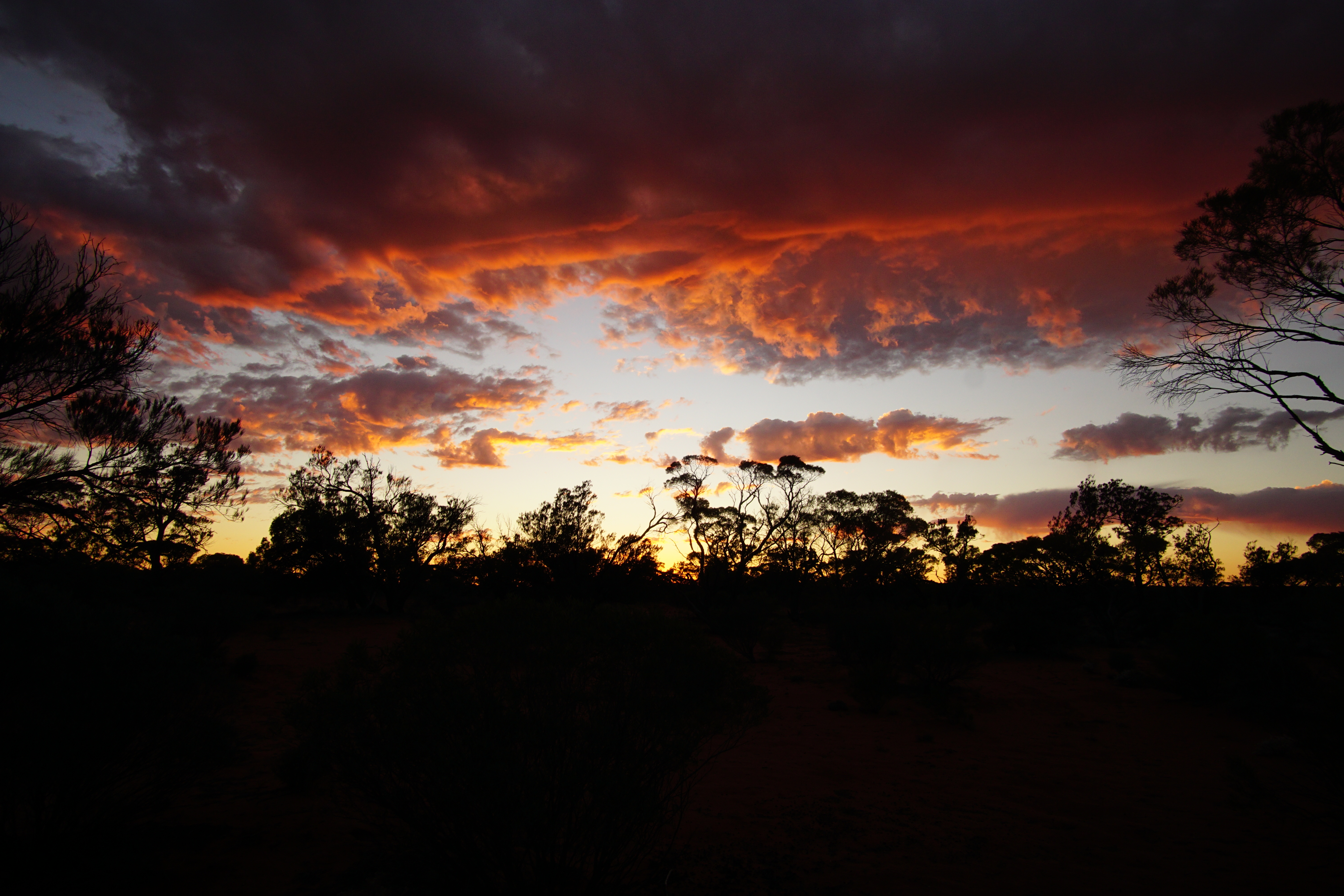 Our pack up was equally fast. Although I took my time giving the truck an especially diligent checkover, after yesterday’s pounding on the rough outback roads to get here. Time well spent as I found the battery clamp had worked itself loose enough to move around, steadily munching the battery in the process. Not a big drama, but as ever, it is best to catch these things early. 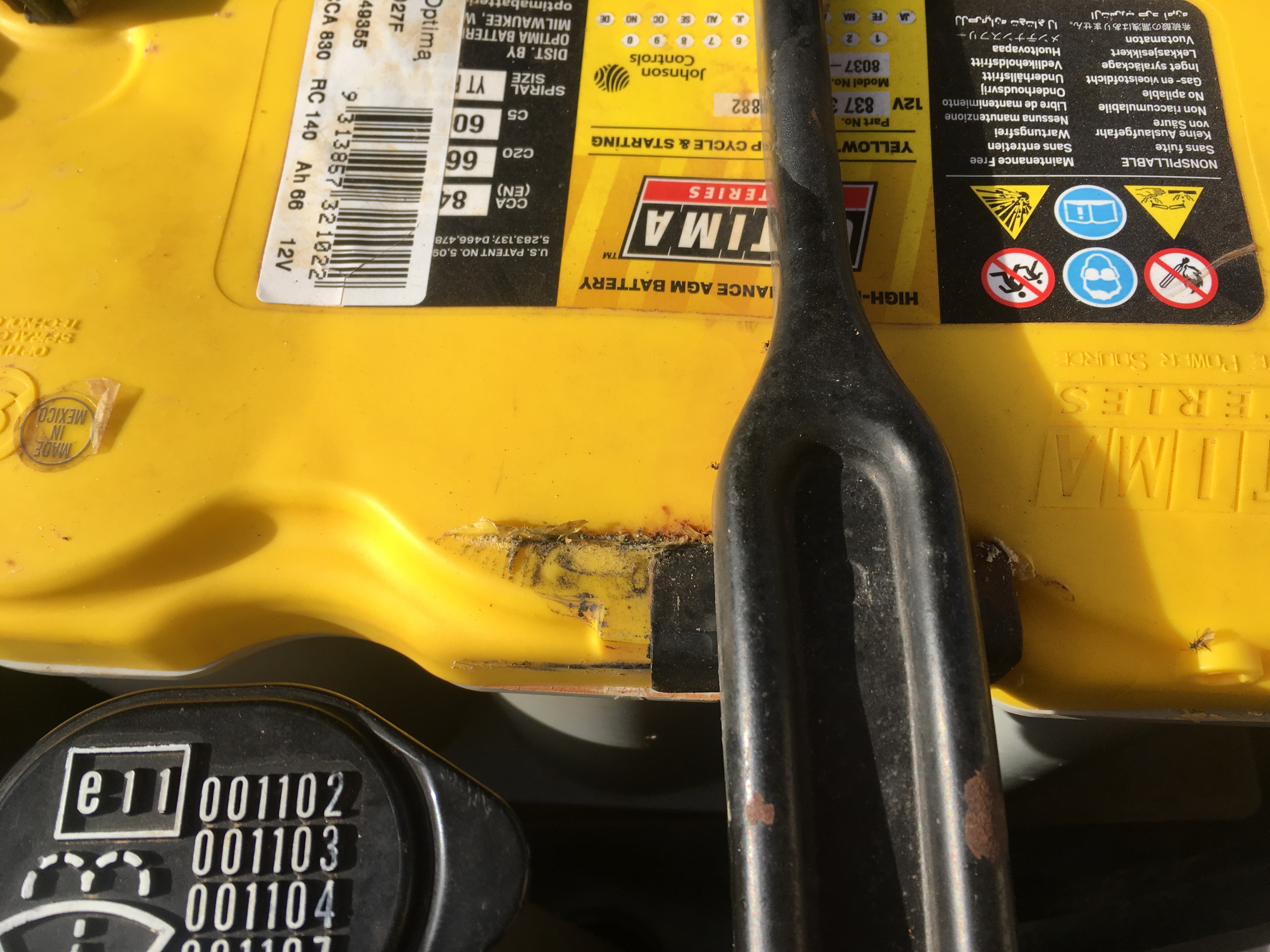 Tyre pressures down to 20psi front, 25 rear, we made a start. At the entrance to Yellabinna Wilderness Area, we caught four trucks we had seen briefly at the Kingoonya pub yesterday, they seemed to know the lady at the pub so we presumed they were locals of some degree. Anyway to let them get a head start we pulled over and had some breakfast. 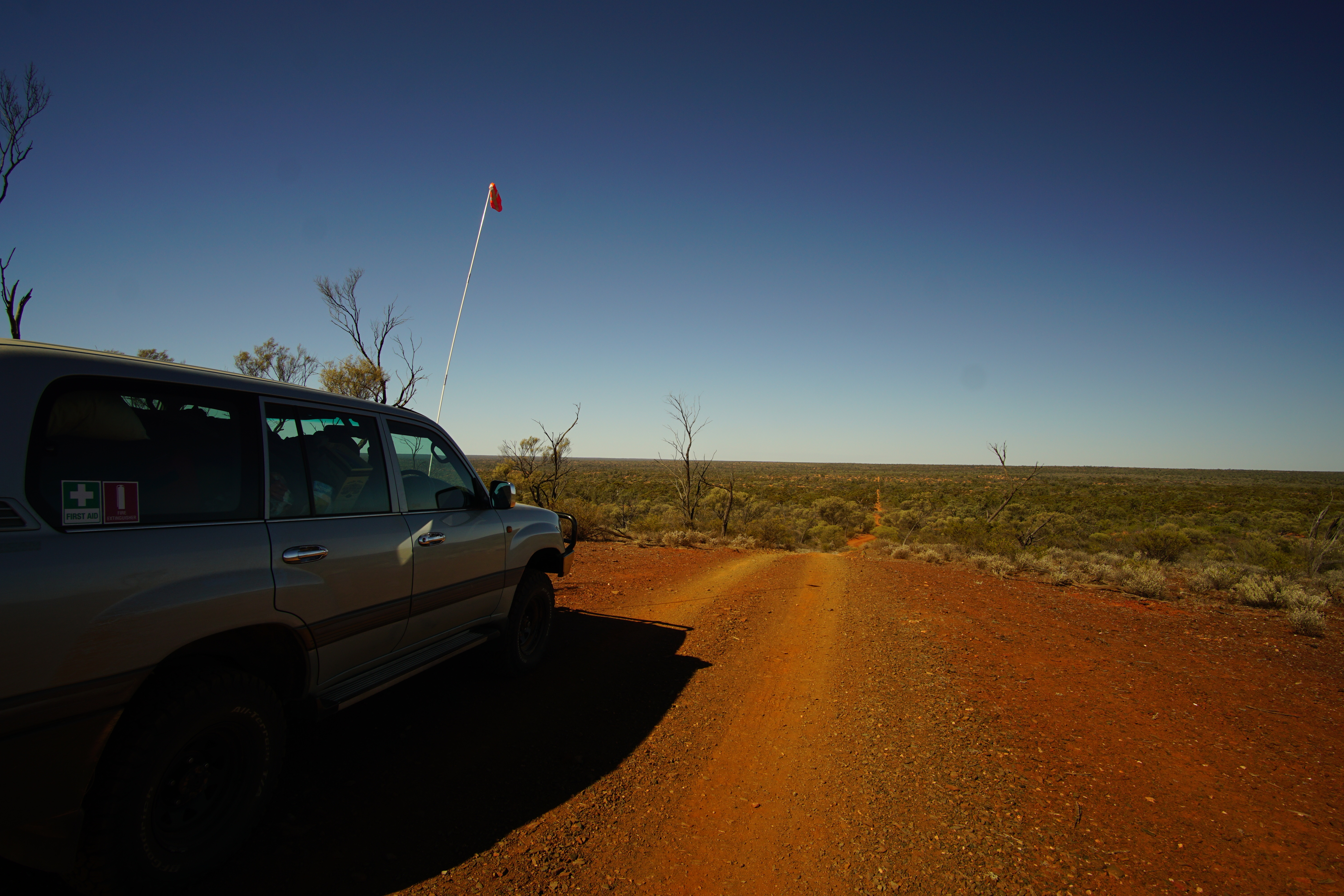 We had burned more fuel than expected getting to the start of the track. I had made the mental decision that if we were more than 1/3 through our remaining fuel before we were 1/3 down the track we would turn around and retrace our steps, and fill up properly at Glendambo. 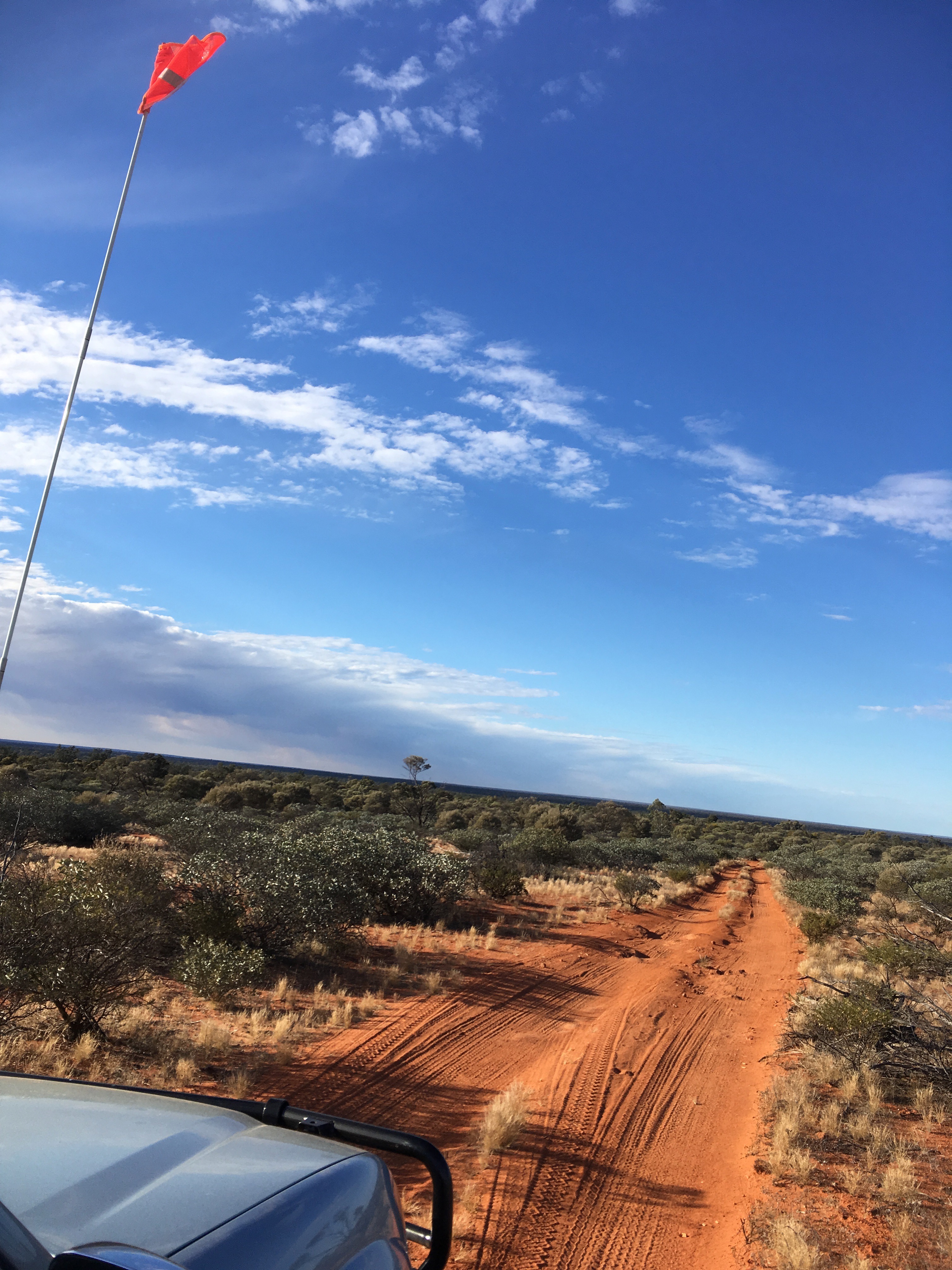 Back on the trail the opening few kms of corrugations gave way to the first dunes, a couple of small ones to start with then a big one, probably 25 metres high, the track twisty and soft. 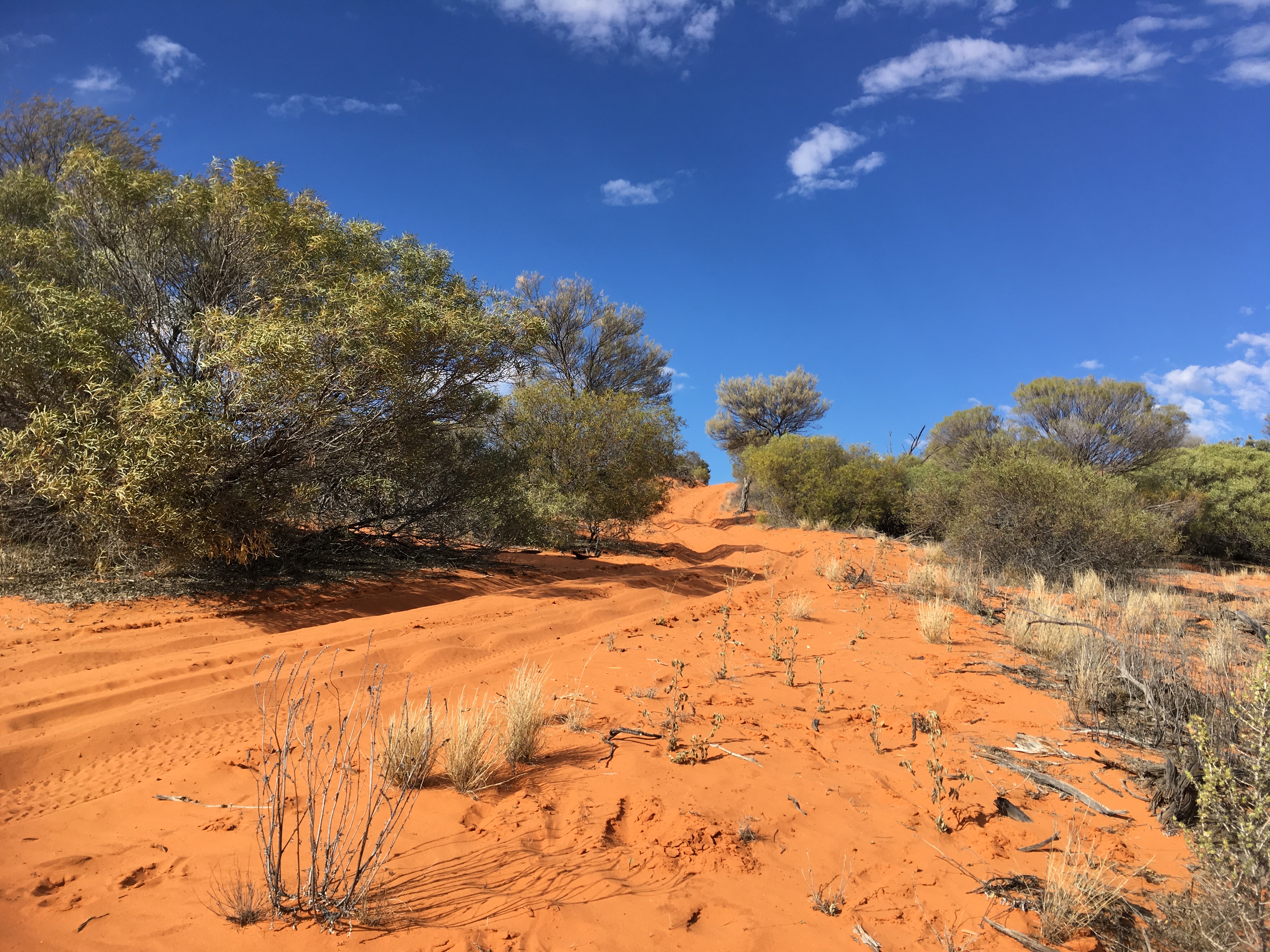 Low range and a conservative approach saw us get about three quarters of the way up before forward motion ceased. I backed down, took more air out of the tyres that had come up significantly since this morning, now 18psi in the front and 22 in the rear. 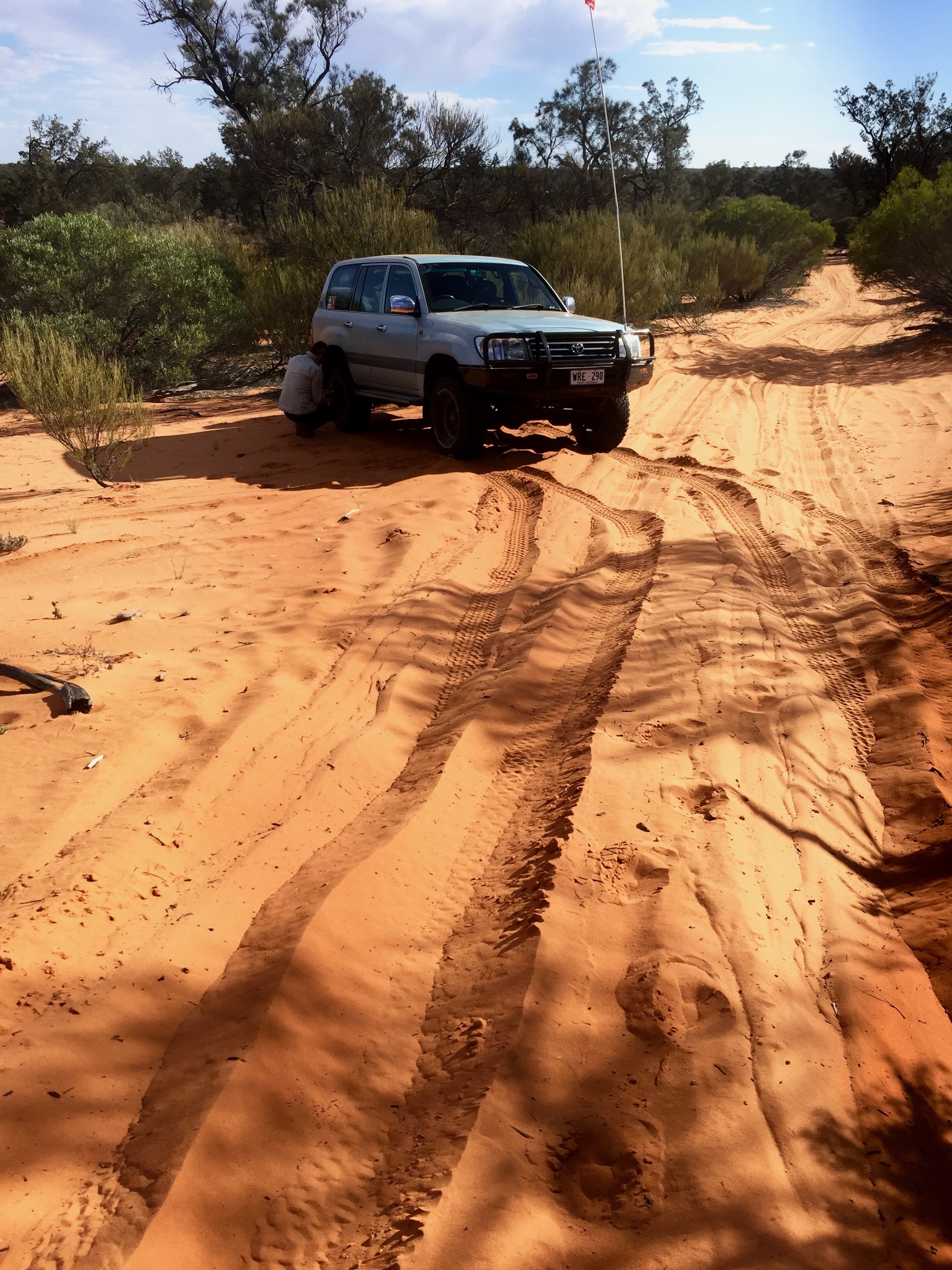 More throttle this time, carrying more speed and then momentum saw us crest it easily, or “Ronny Dahl style” as N phrased it. With the tyres now correctly set for this surface and load, plus my eye keyed in, meant this would be the first and last dune that defeated us. [It should be noted we were doing what is generally accepted as the more difficult direction – but of course we were… north to south, as the dunes are steeper on that side – however with the vast majority of traffic going the other way I found the that the south side of the dunes, while less steep were considerably more chopped up and rutted]

Not for the first time I thought, the big advantage of an automatic gearbox in soft sand is the ability to change (specifically down) gears without losing momentum. So if you suddenly see it is getting softer or steeper you can manually shift it down a gear in anticipation.

My main concern as the track went on was a head on collision cresting a dune. As you can see from the photos we had our sand flag at full height and it would give clear warning of our arrival to anyone coming the other way. Unfortunately I only saw one other truck, out of the 10 other trucks we encountered on the track, sporting the same. Some had half effort sand flags that would have give you a good millisecond or two of warning before they crashed into you. Why? Well a tall sand flag cops merry hell on the overhead trees, is the only reason I can think of, small price to pay in my book.
Again we soon caught the group of ‘youngsters’ ahead. This time one had beached his Navara playing around on a obstacle. 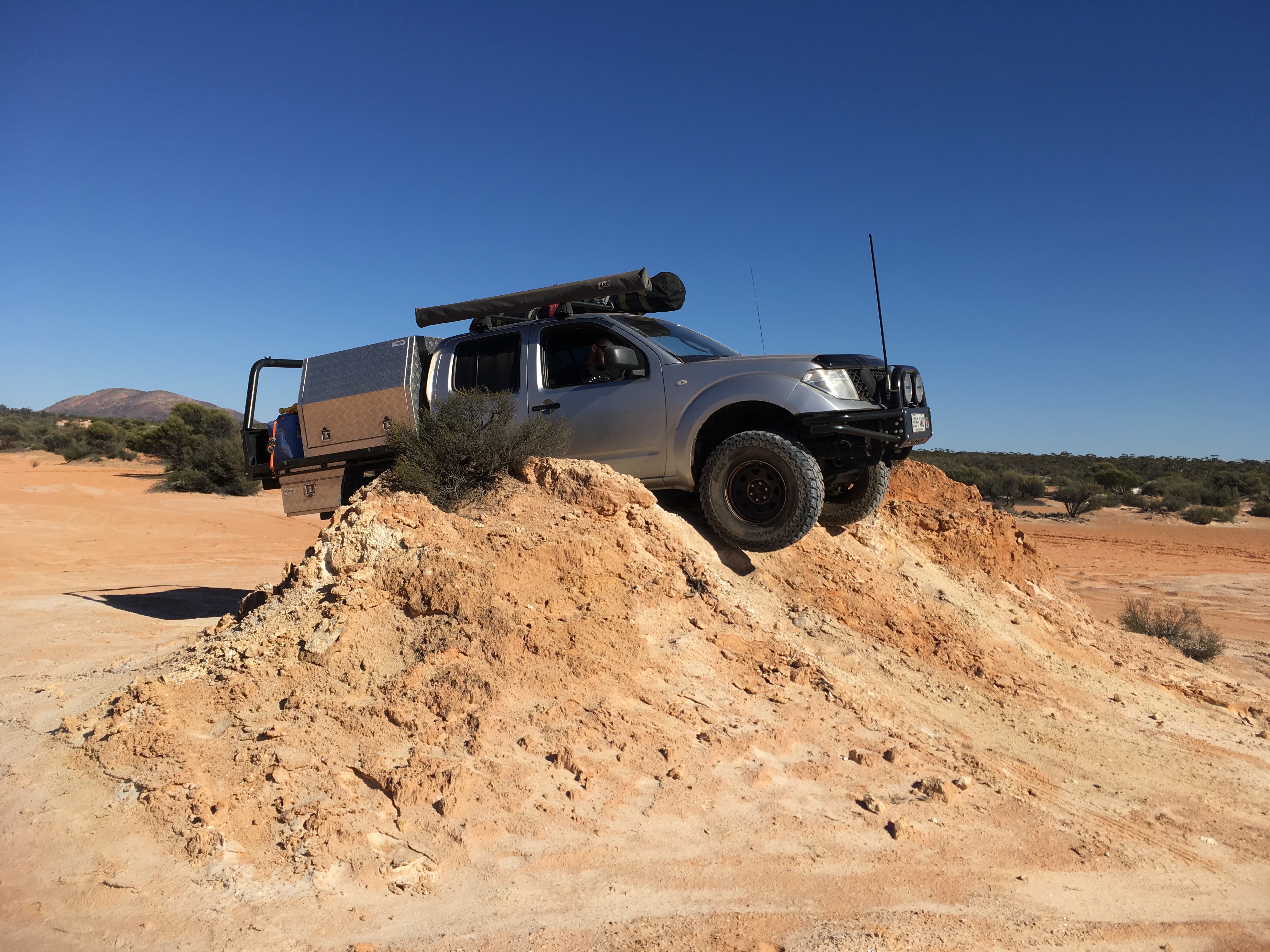 His mates though it was great as I took a photo and made some comment about Nissan’s. We checked they were all good and carried on. 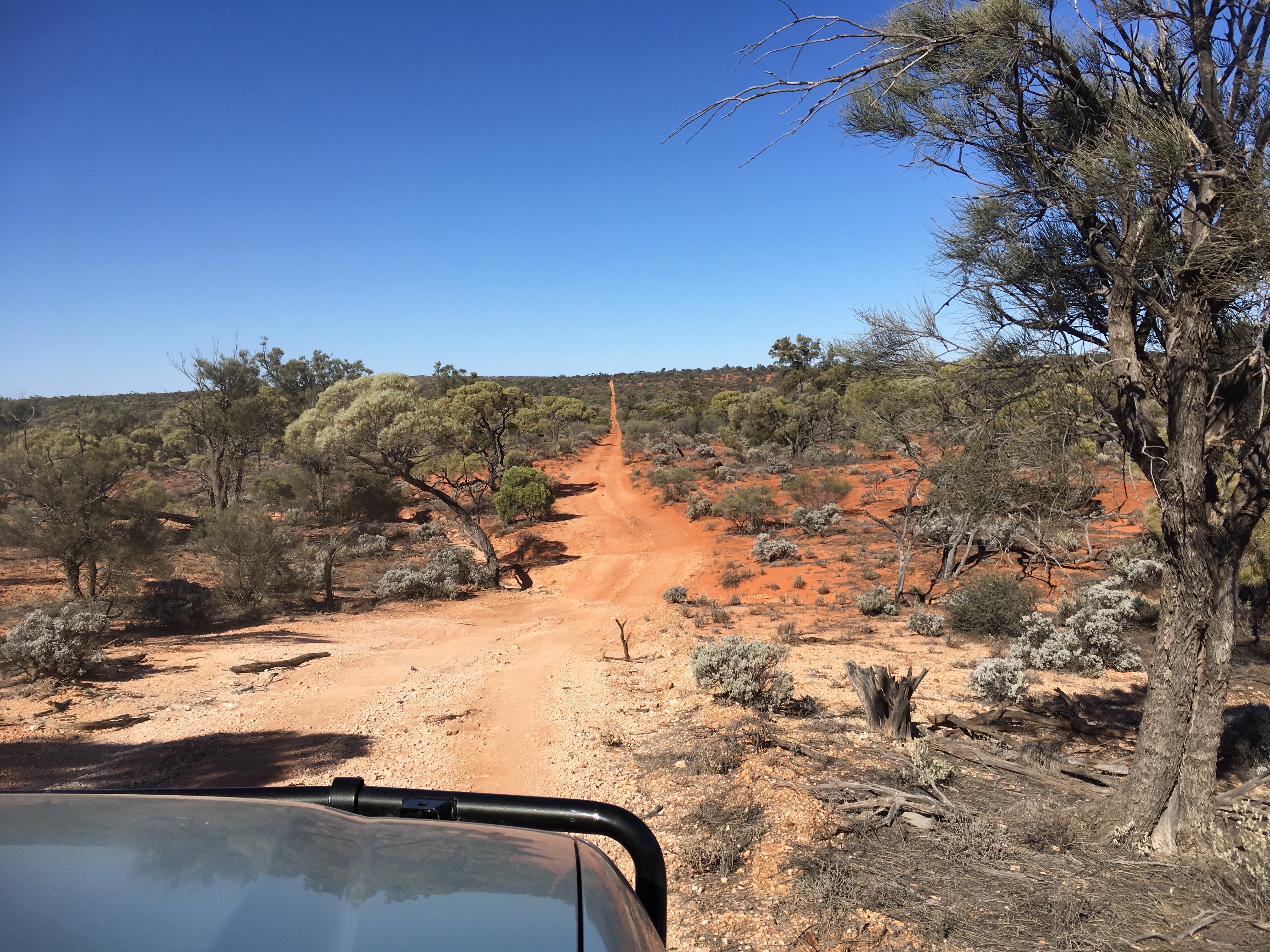 Atop of every dune we would have a good view into the distance to try and spot anything coming our way as early as possible. And so we shortly spotted the glinting of paintwork in the distance. Carefully up the dunes as we got closer, I paused on one as I figured they must be close and sure enough the lead vehicle came over the top. I reversed back to a place where I could pull off the track and let them by “there is a group of four somewhere behind us” I said “although not sure how far as they had one stuck as we passed them”, “ok, thanks” said the lady driving “four to come behind us”, “no worries, I will wait here for them” said I. Her group duly passed. 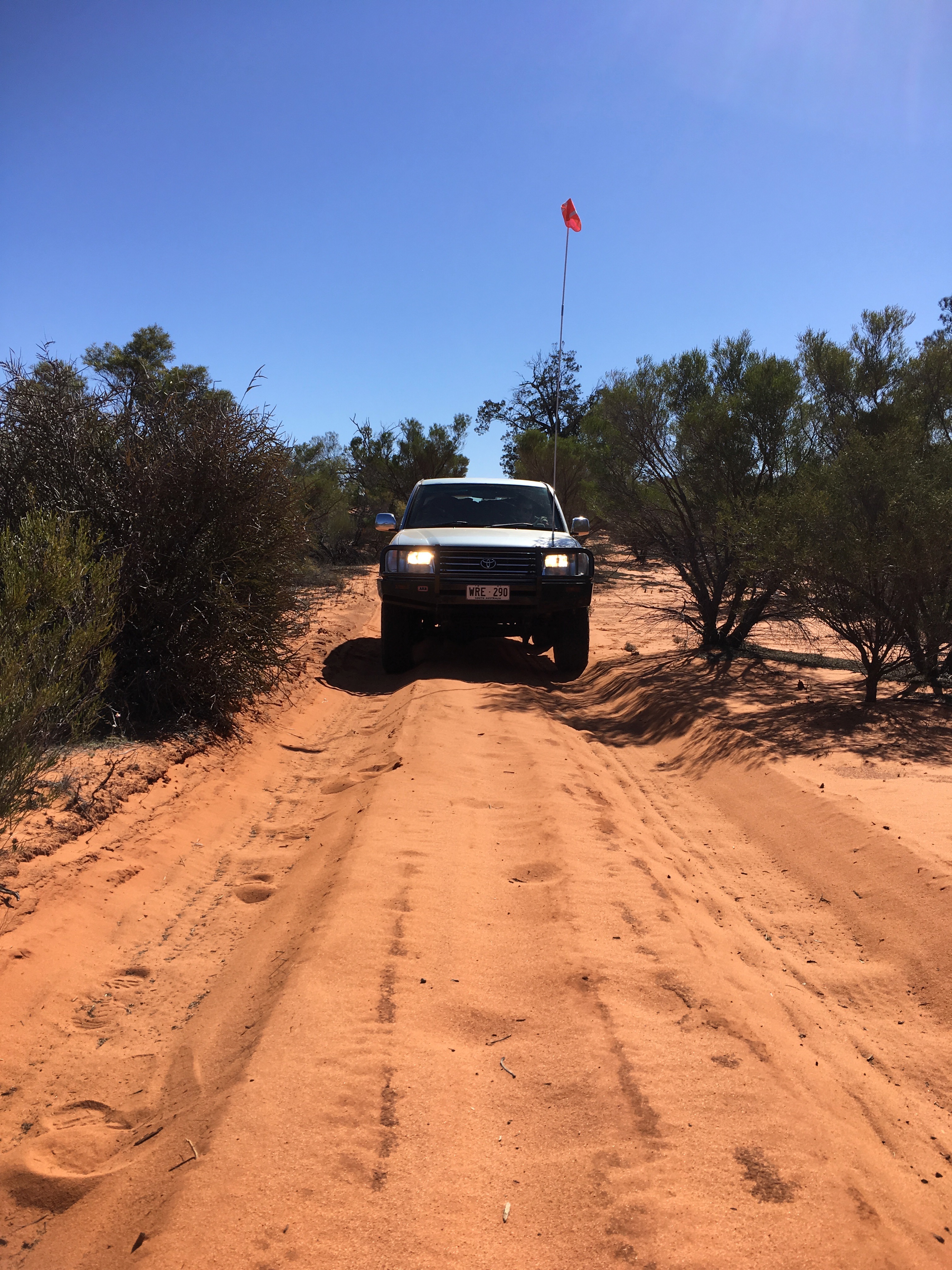 From then we were alone for the rest of the day. Mighty big landscape. 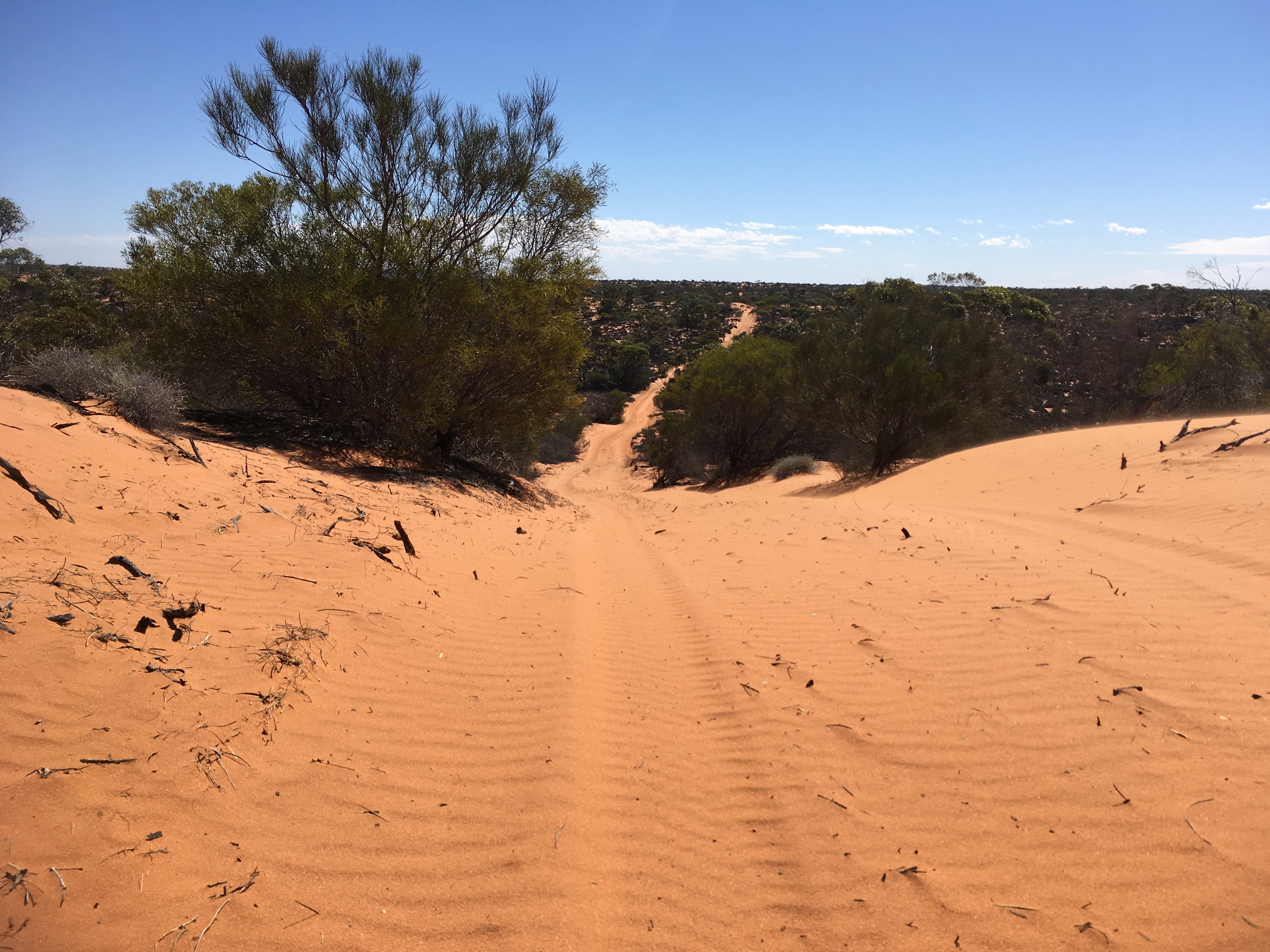 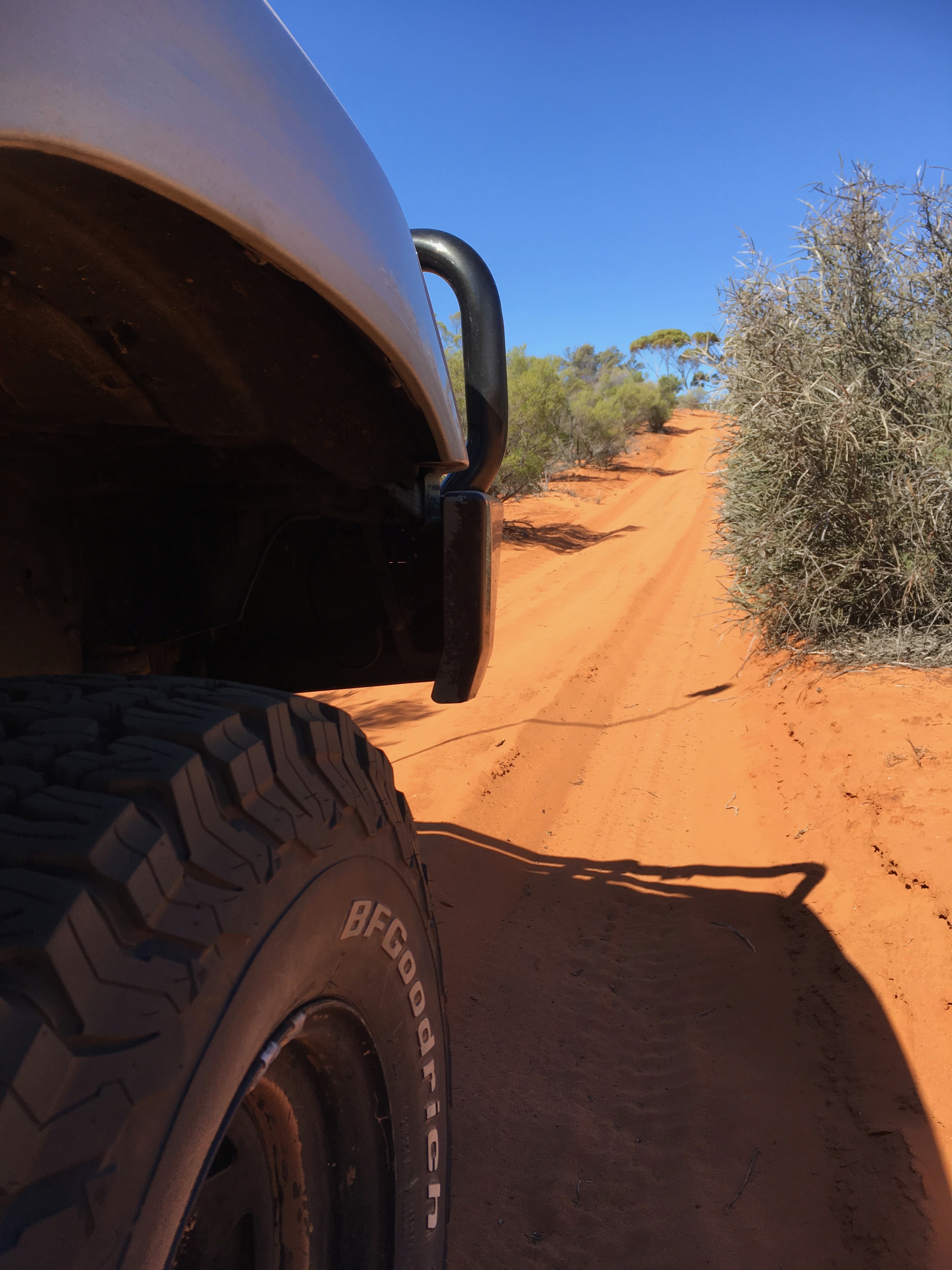 We ticked another wildlife box that neither of us had before in the wild. The magnificence of the thorny devil, which exists solely on a diet of ants. 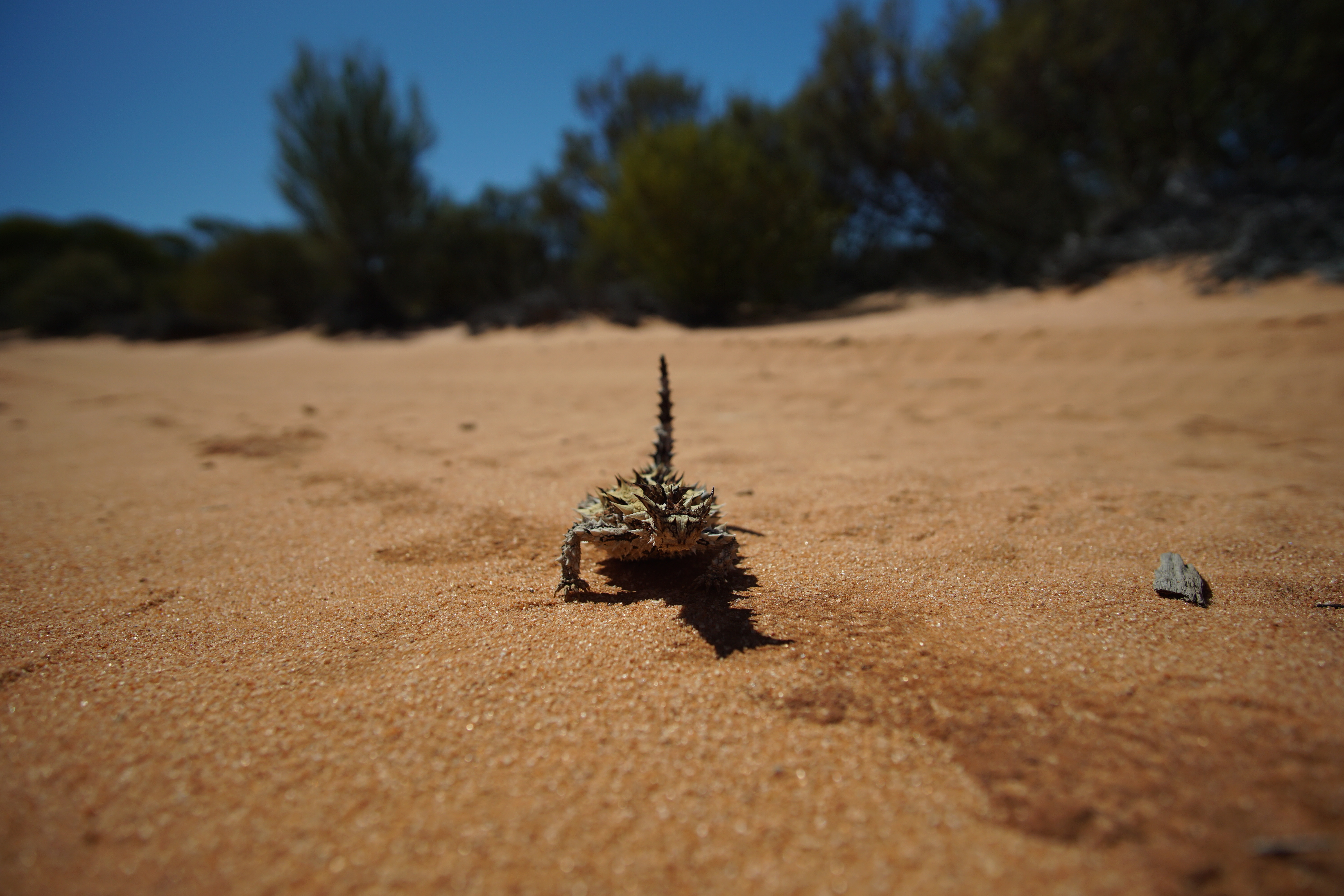 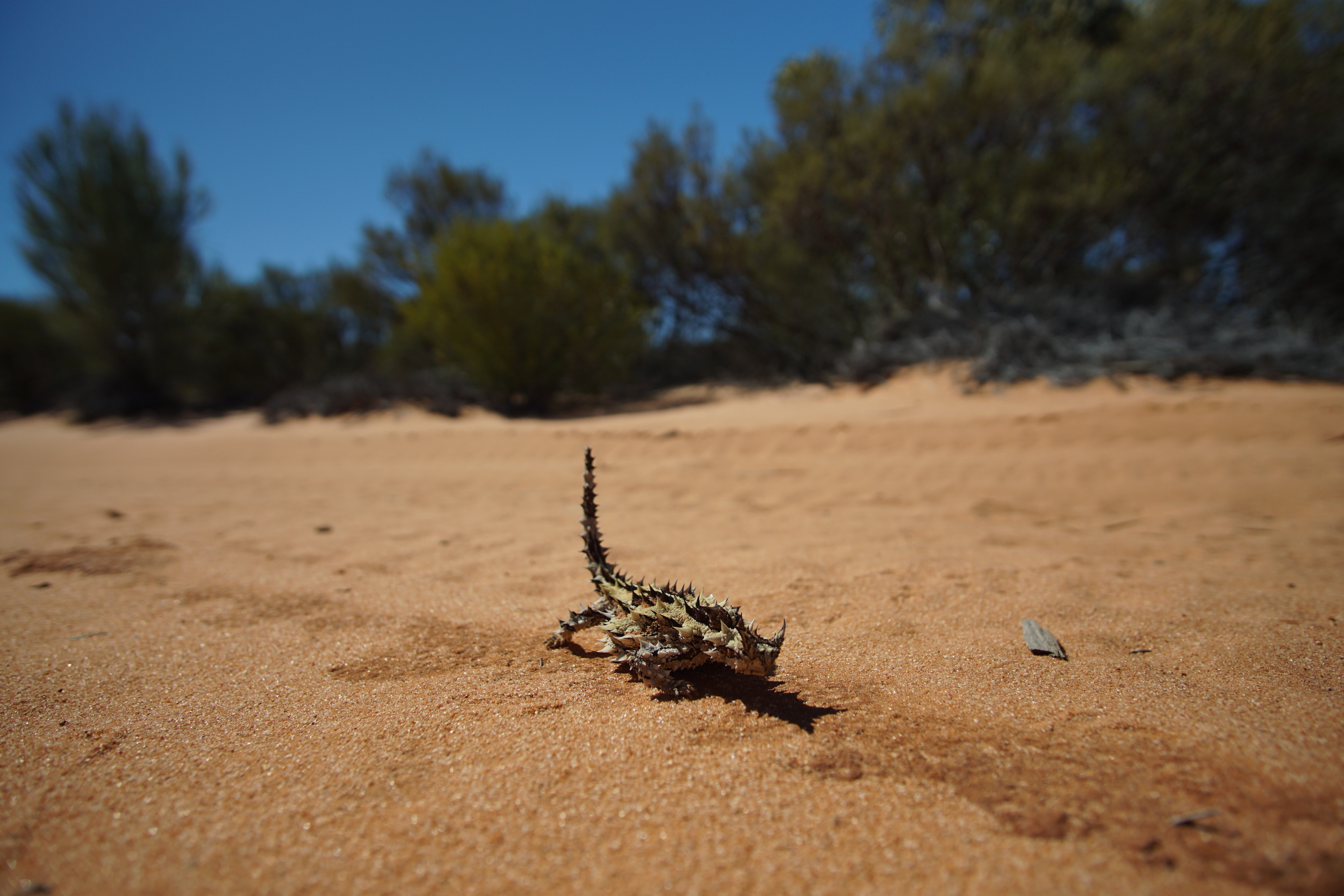 Only flies are more numerous out here, so if you’re going to eat just one thing then ants probably a pretty good pick. 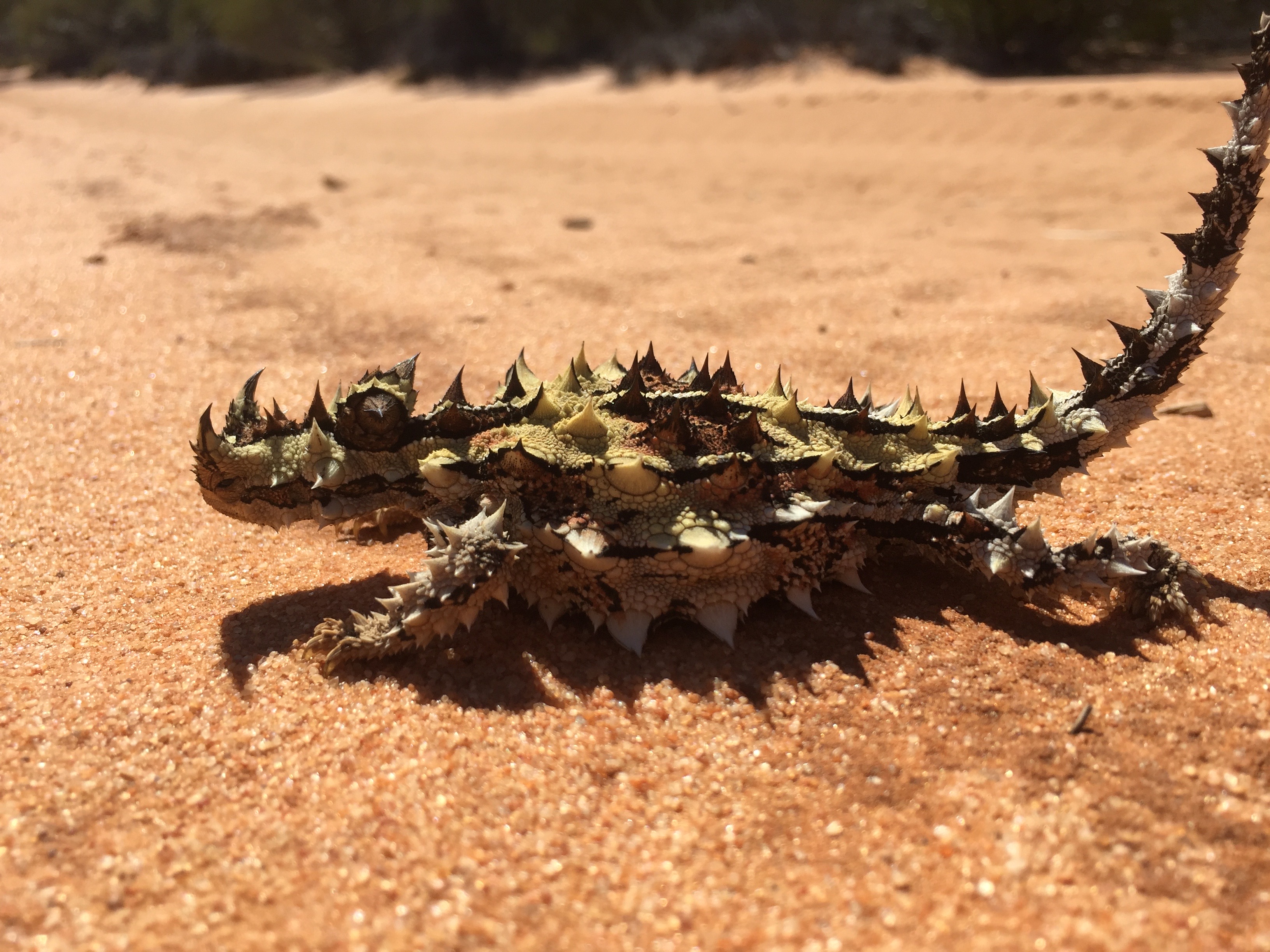 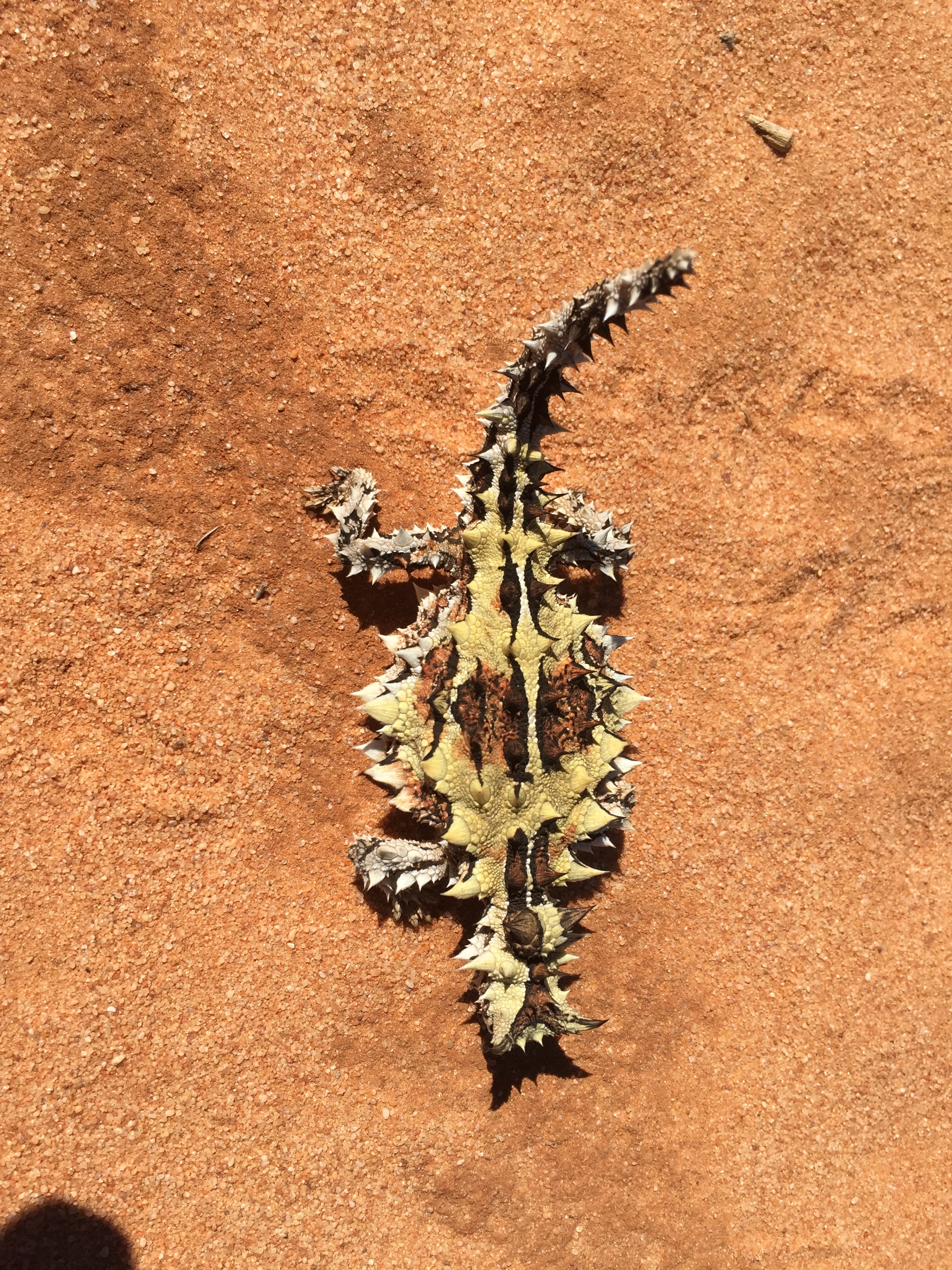 Knowing there were four trucks somewhere behind us, N tried to usher the slow moving little devil off the track, in the end just picking it up and moving it. All of which she was pretty wrapped by. 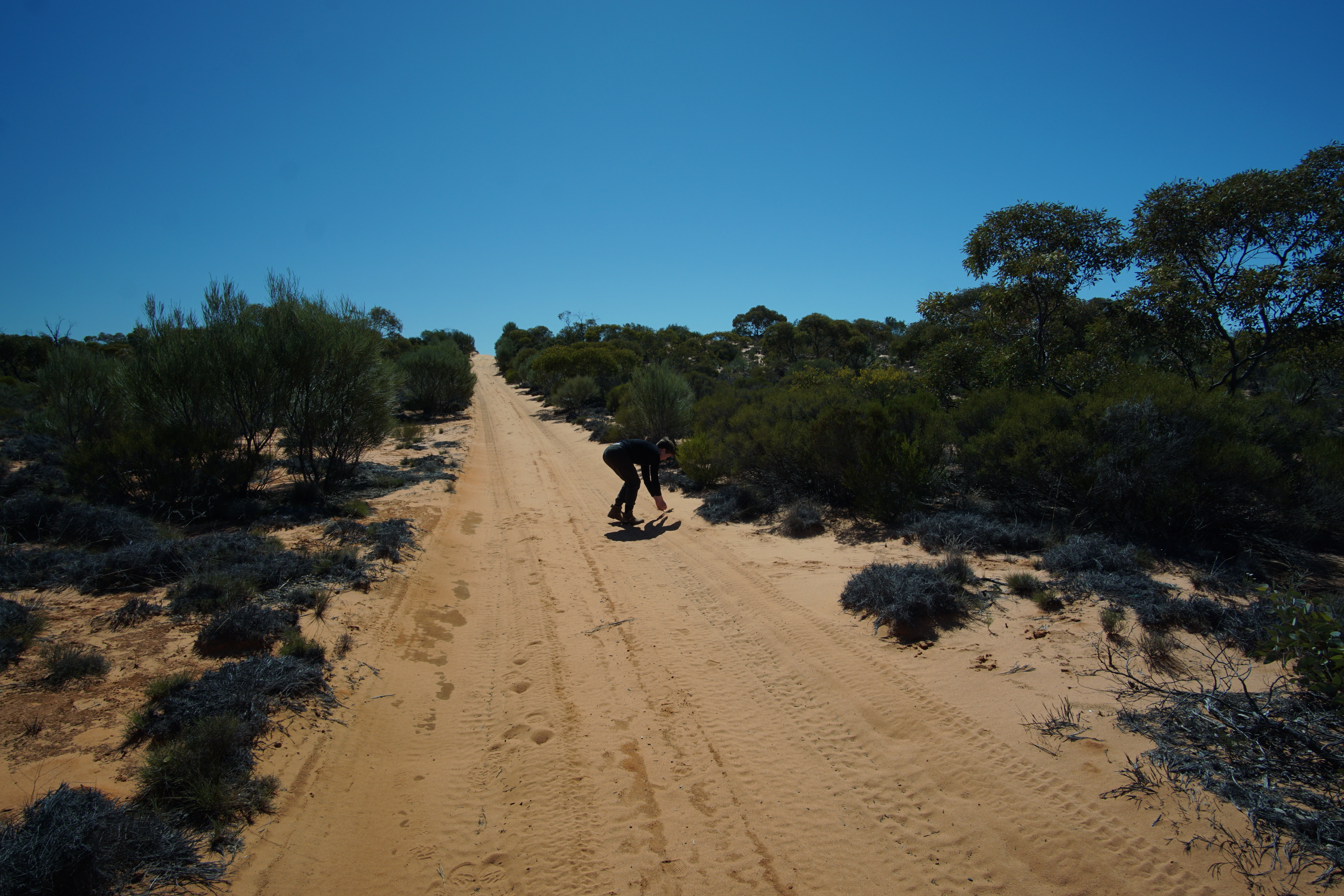 The plants of the arid landscape continued to be another highlight. 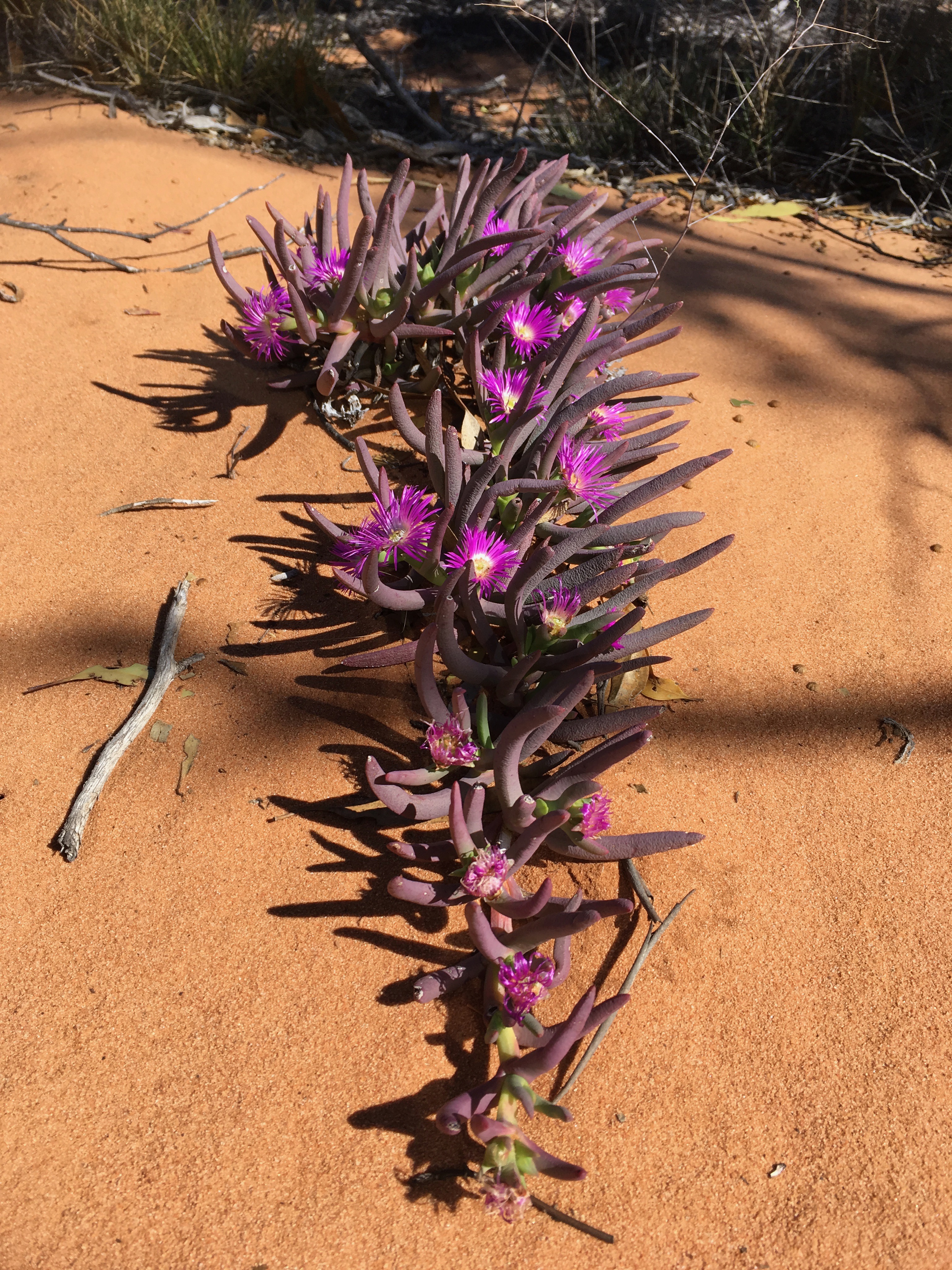 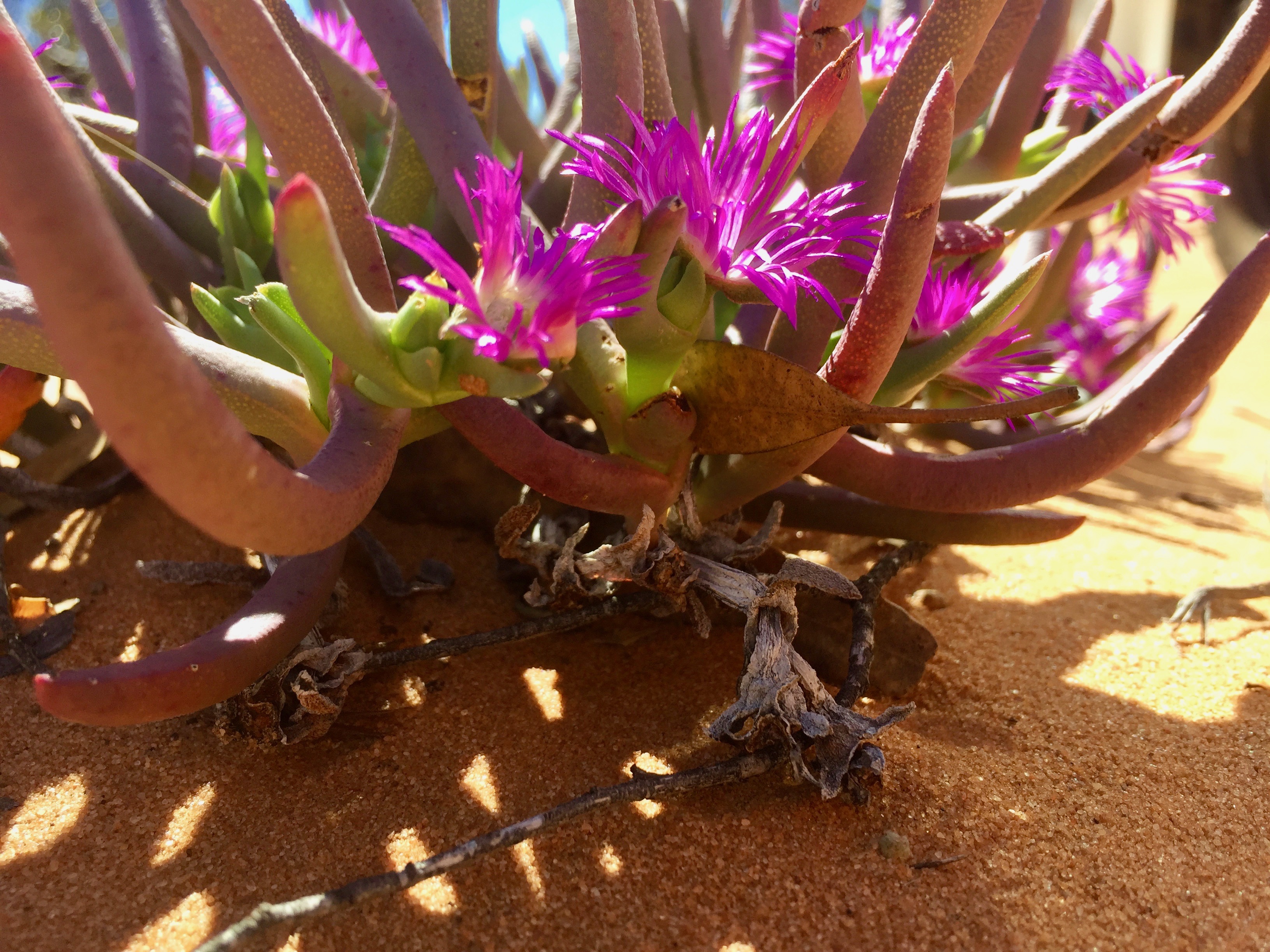 We took the detour to Googs Lake, another dry lake, with campsites all around the western side. This would be our stop for the night. We initially set the tent up facing the lake. However, the wind had been picking up throughout the day and was making a mockery of trying to make a shelter using the awning and the side panels. So we just rotated the tent 180 degrees, so the slope at the rear was into the wind and the front ‘porch’ was calm and secure. 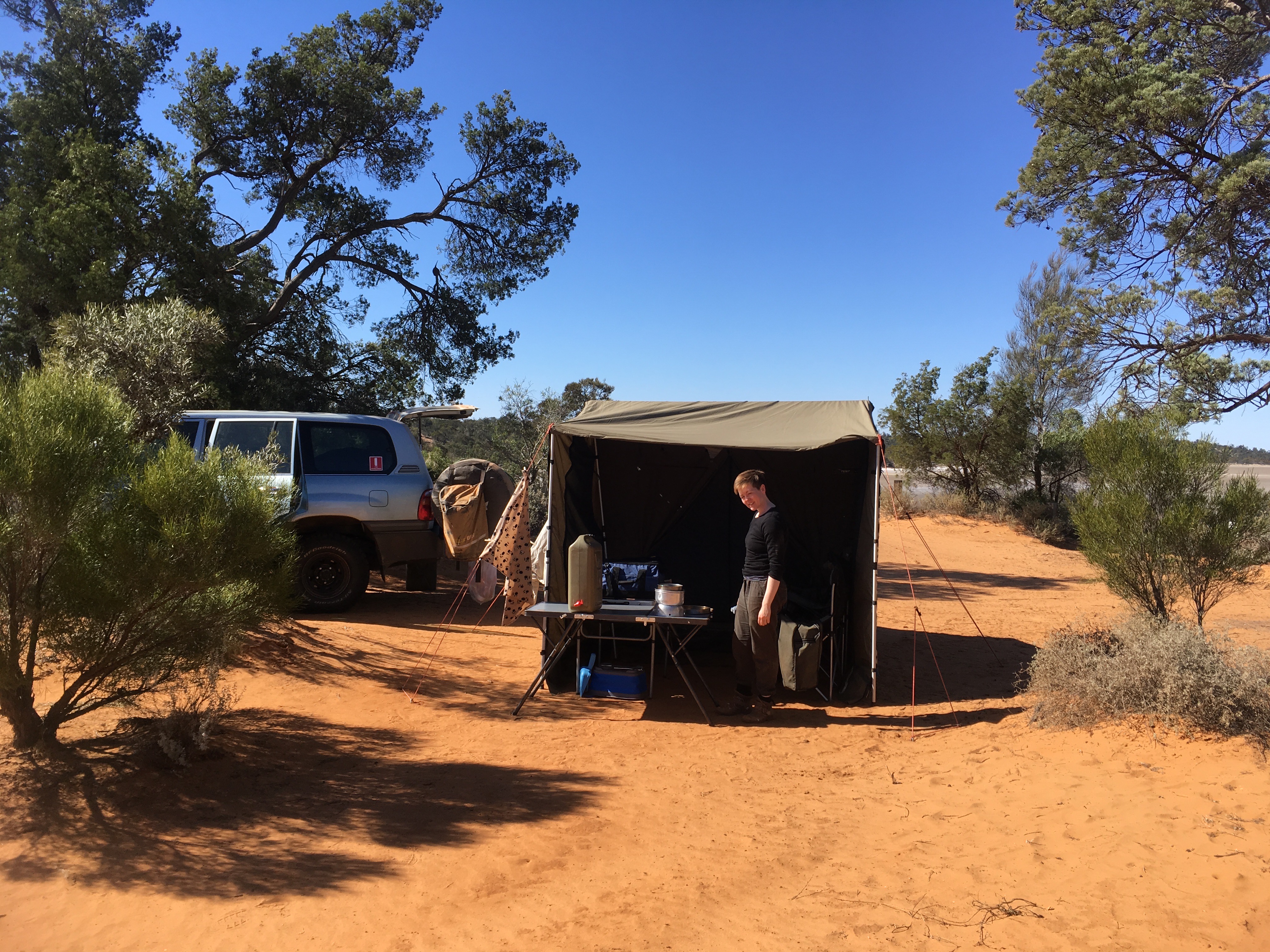 Something not right with this picture… 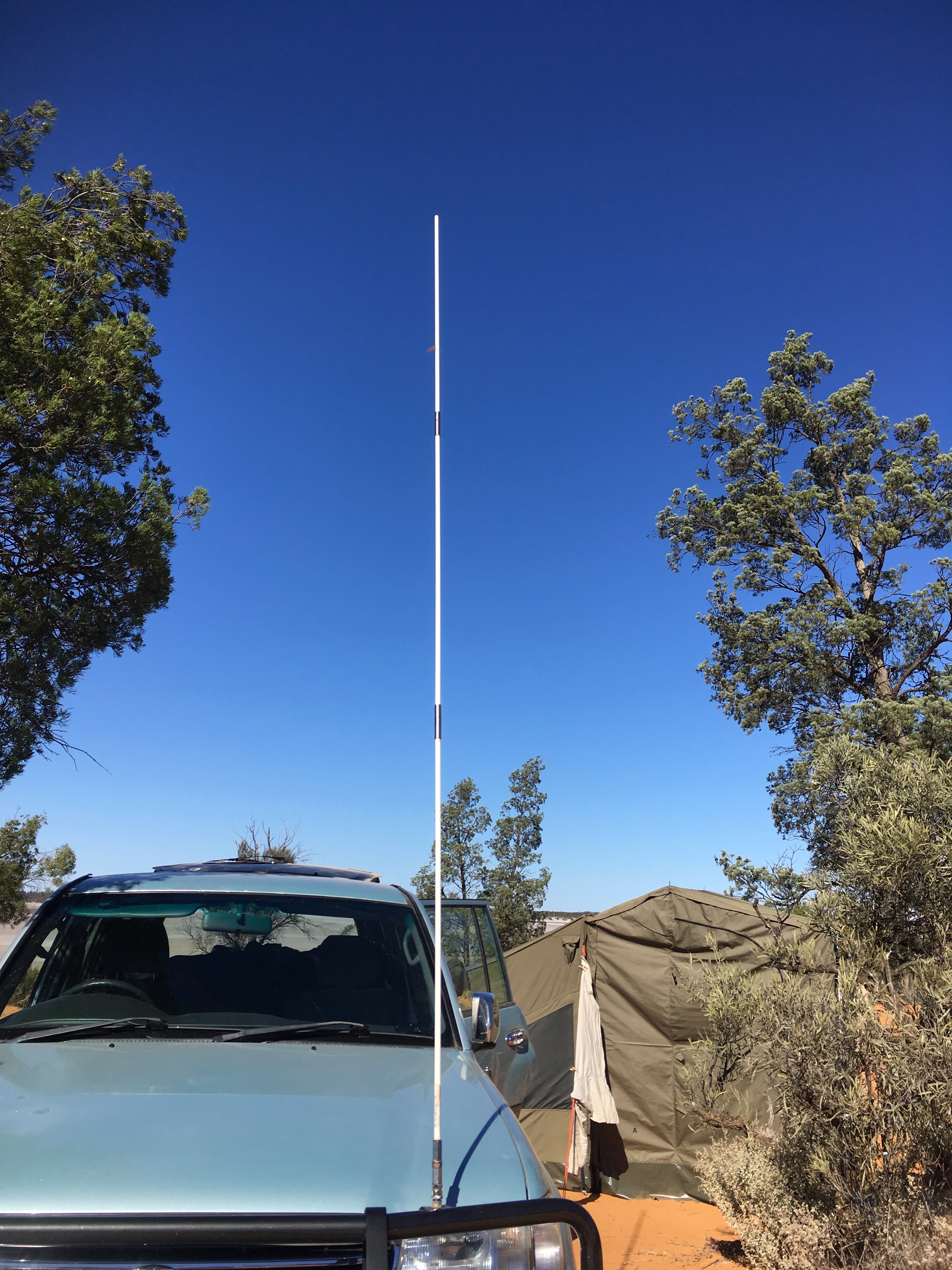 Have a bit of a rummage around in the truck… Ta da! 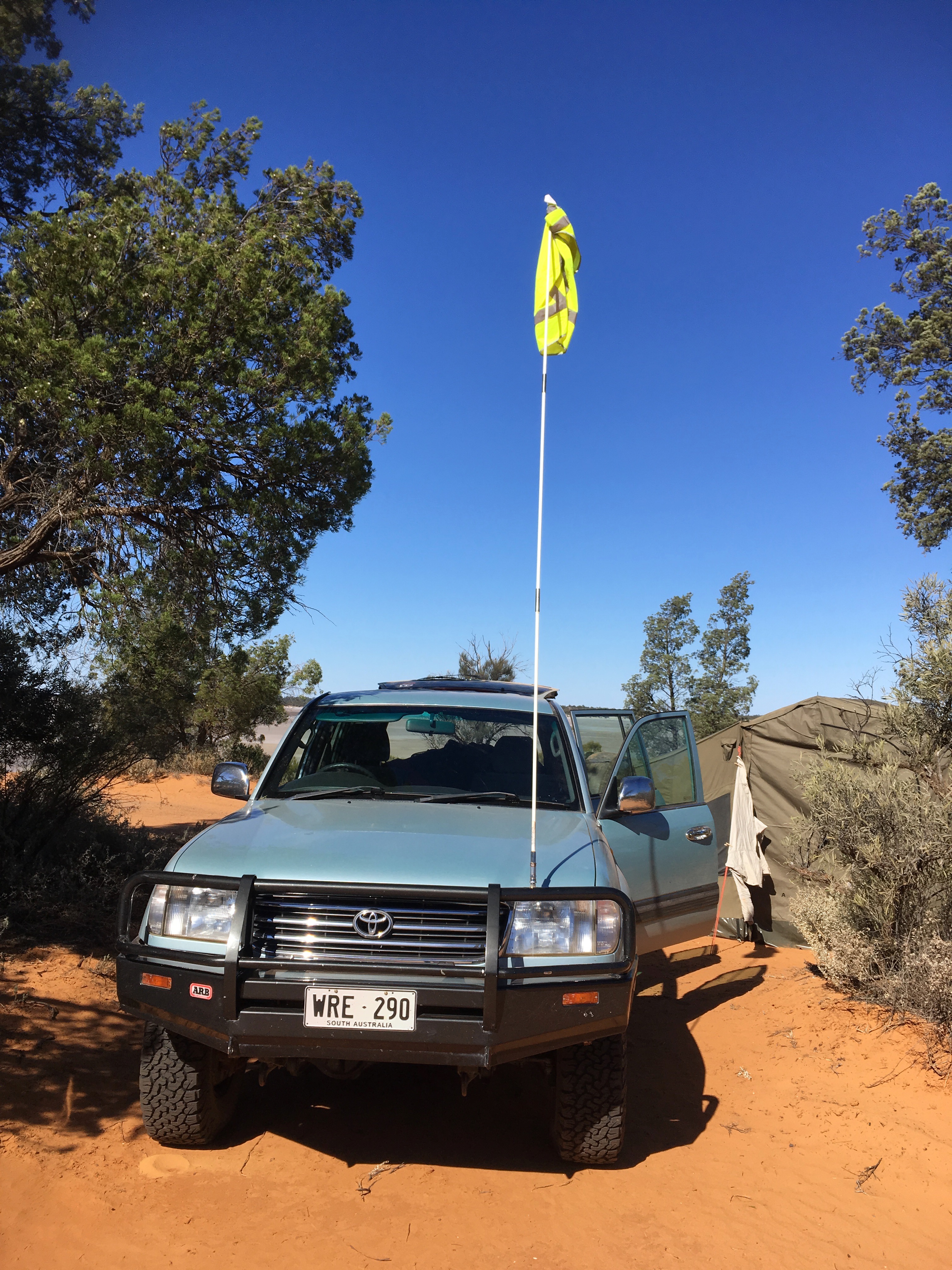 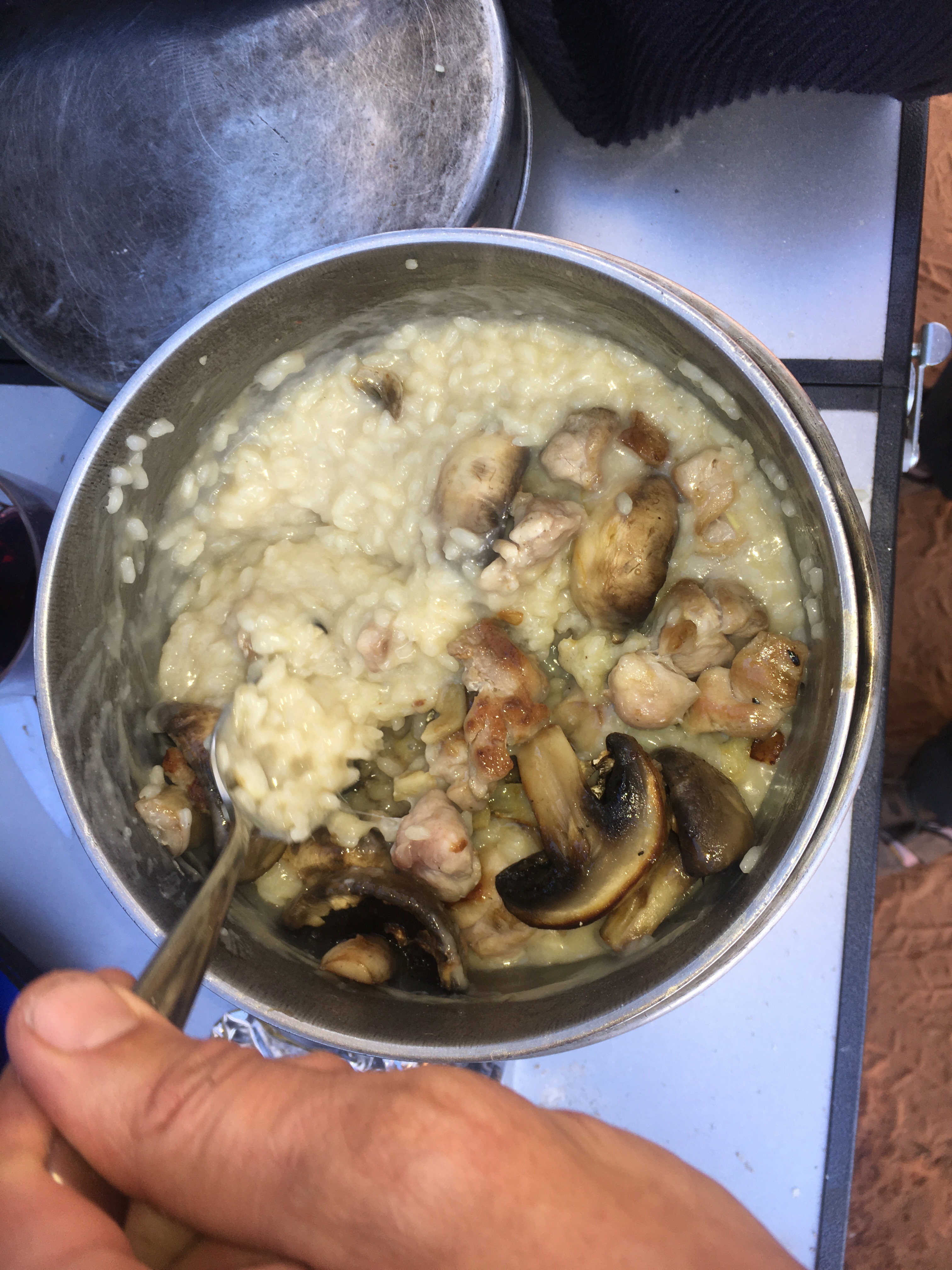 Of course, lake is always a relative term in the worlds driest state. 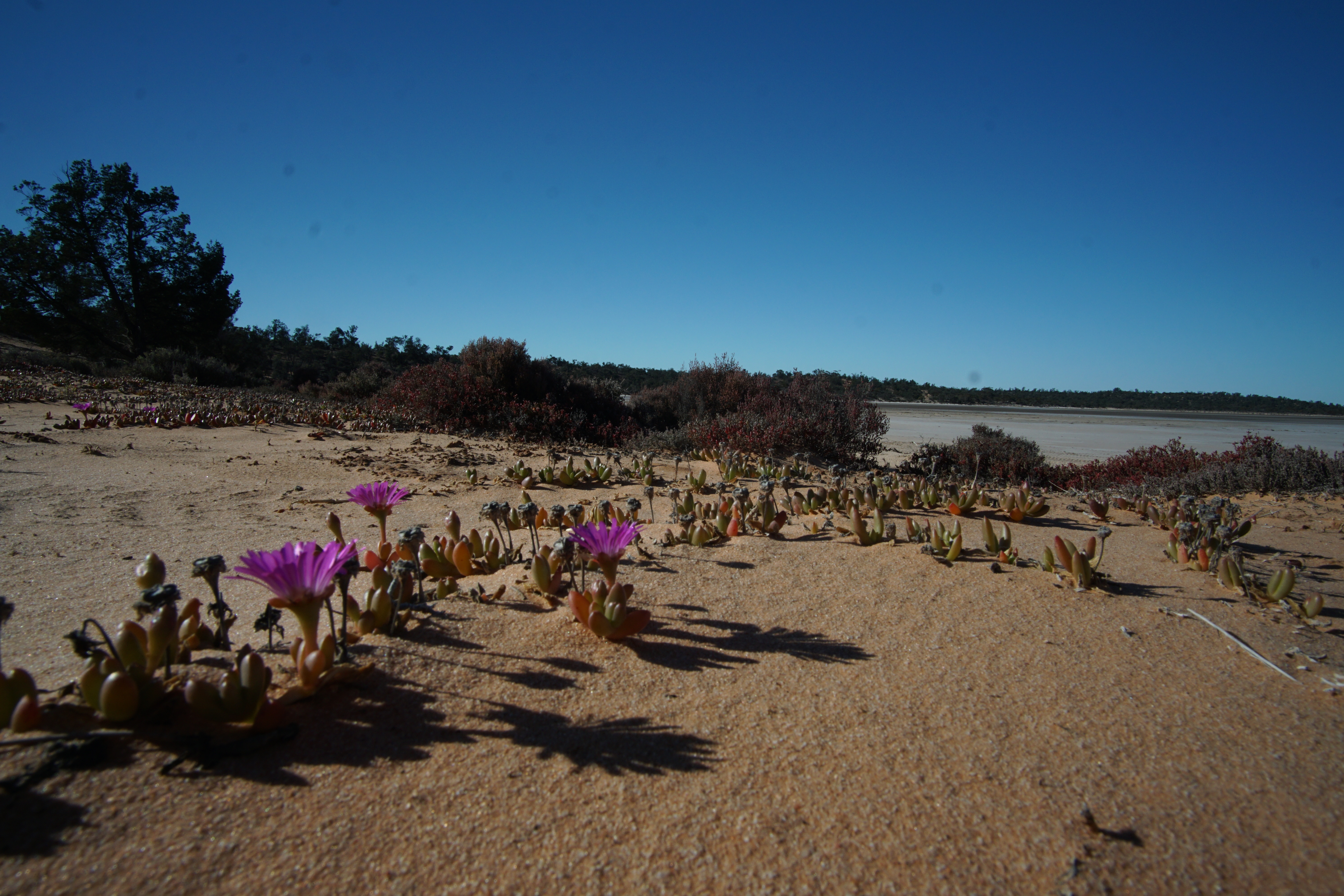 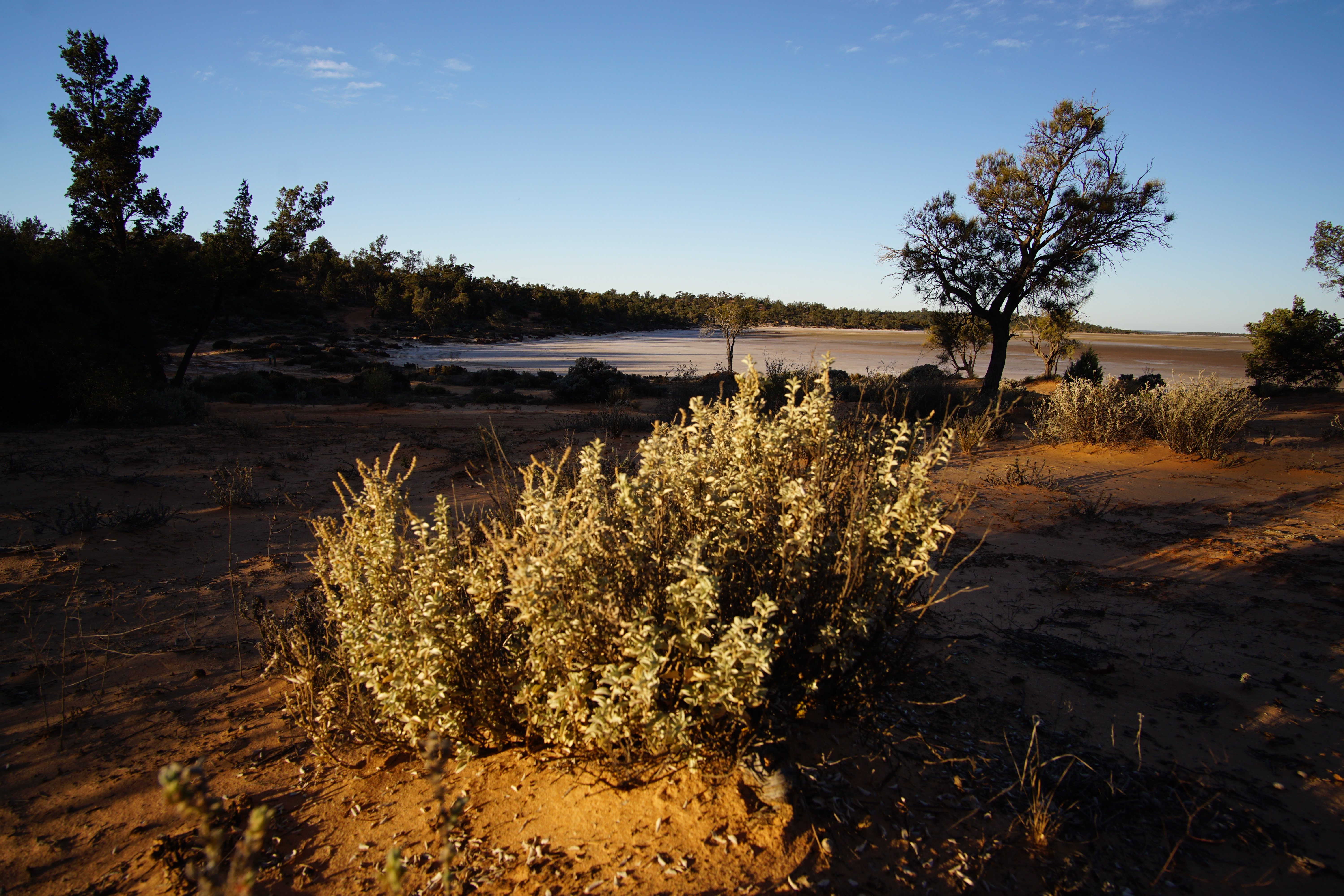 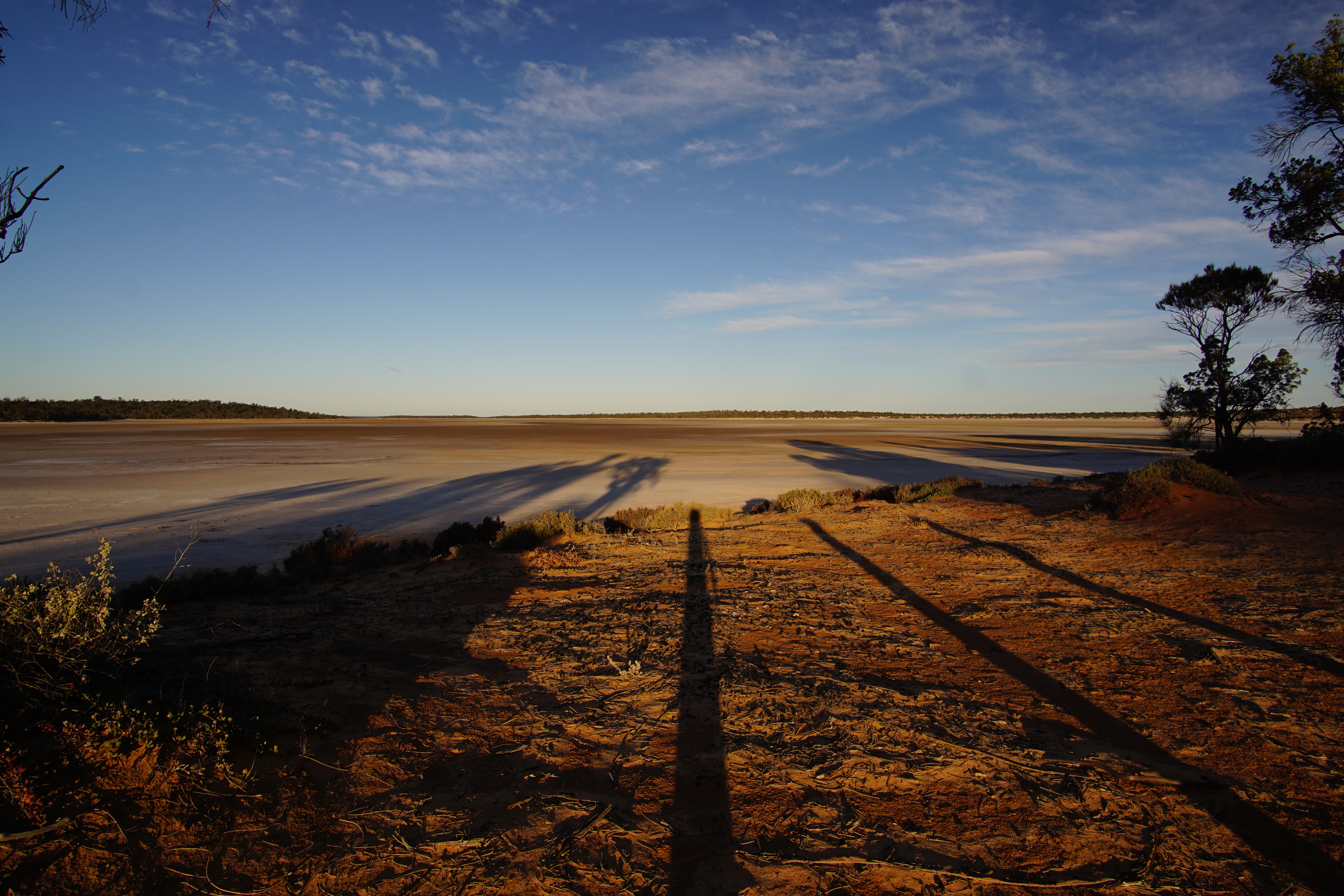 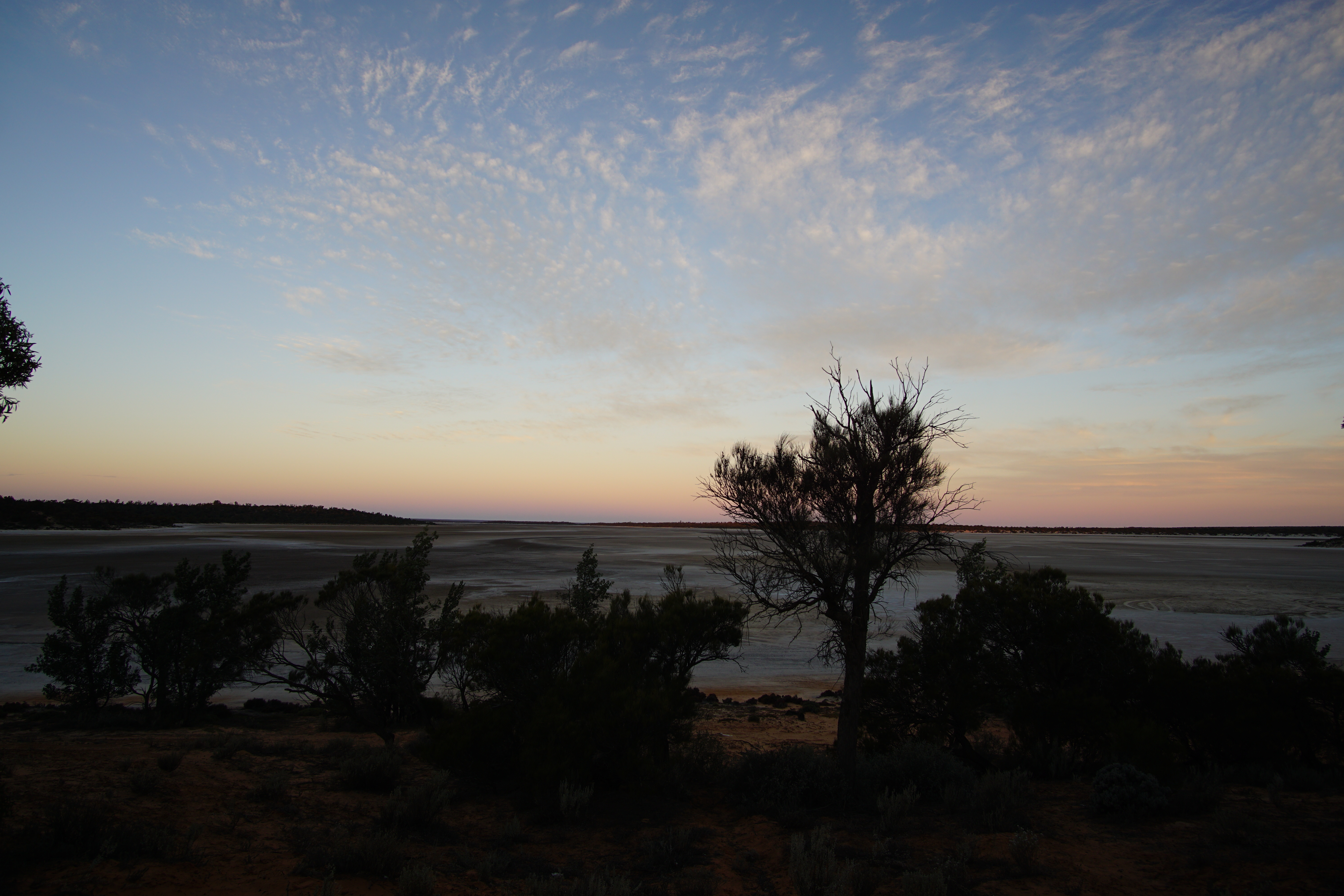