Arriving in the small coastal town of Ceduna, SA’s most westerly ‘major’ town, and an administrative centre for the many indigenous lands around this area. We joined the retirees at the Foreshore Caravan Park. Small but extremely well kept, with brand new shower blocks and camp kitchen, it was sterile heaven for a couple of dirt covered desert rats.

After five days in the bush, this was planned as our opportunity to clean up, restock the fridge, watch a bit of our favourite YouTube and Unleashed TV. What we hadn’t counted on was hugely changeable weather. I had been keeping an eye on the forecast before we left, (however that was five days ago) and all was calm for rest of the day when we arrived. Some rain clouds overhead, which was fine by me, a good dose of rain would knock the red dirt off everything. 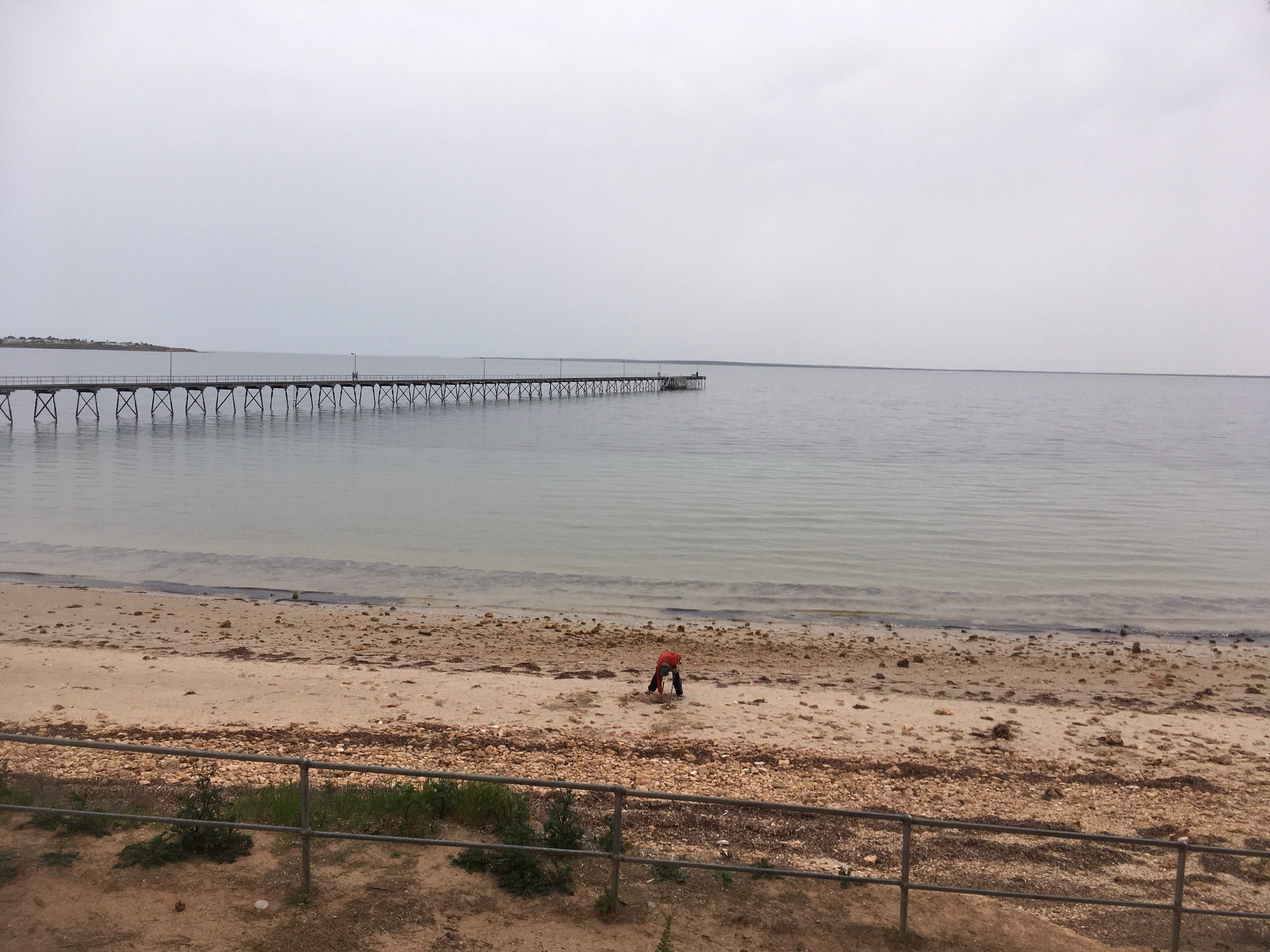 Then about 9.30pm serious gusting winds hit, getting into the little room we had created under the OzTent awning and turning it into a sail. I collapsed the awning, attached the extra flysheet, lashed down the guy ropes for the tent that I just hadn’t bothered with, so calm it had been up until then. Closed the tent right up, we’ve been though worse in it, so now properly set I wasn’t concerned. All good fun… Then the wind just stopped, as quickly as it had arrived. Never mind, better to be safe than sorry.

Next day was fine and clear till about midday. I had been looking pretty intently at the national weather forecasting site, trying to work out the best way to play the next few days. Then the unsettled weather started again. No worries, by then we had cleaned all our clothes, cleaned the Cruiser inside and out, plus all of our gear, restocked at the excellent butcher (seriously, better in many ways than any butcher in Adelaide) and supermarket.

With the weather looking dicey for the next few days for pretty much the whole state, I briefly flirted with the idea of high tailing to Alice Springs, but then saw sense as that is two days of flat out highway driving. No, our original plan to explore the coast west for a few days was still a good one. With the weather fronts moving east and being so changeable meant we should get some good spells too.

It should be noted that two seperate, slightly shifty characters both tried to sell me opals (Lord only knows how they perceived I was any sort of ‘bling’ guy???) when we were in that caravan park. One was quickly turfed out after coming in and setting up their caravan, having not paid. Not quite sure how that one was ever going to wash as they were parked right opposite the camp office. Anyway, maybe there is money to be made by fleecing grey nomads with gemstones, who knows. Another reason, along with a little casual racism from some grey nomads, not to hang around too long in these caravan parks.

High winds were predicted again that night, with the speed going up seemingly with every person I spoke to “50km/h winds tonight they say” “expecting 70km/h winds tonight” “winds are going to be 90km/h tonight!” As we were obviously in a tent while everyone else was in a caravan, then this seemed to be the conversation du jour to have with us. I had faith in the OzTent even if others didn’t.

The turn-over rate at the campsite was incredible. I spoke to the groundskeeper, we’ll call him Willy, one morning as all the caravans packed up to head out. He says nearly everyday three quarters of the camp leaves and all those spots would be filled again that afternoon. I appreciate that this is a major east/west tipping point, but it still seemed a pretty high turnover to me.

Plus, how many people are on the road in Australia at any one time? Obviously most round here were retirees, however whereas at one time we seemed to be in a very small minority of younger people who went on ‘driving holidays’, now it seems it is becoming more and more popular, again. The more things change, the more they stay the same I guess… No doubt driven by the high sales of a 4×4 vehicle as the main family car, plus a bit of vice-versa. Is this a good thing? Two sides to that coin I think. Places that are known, promoted by media or state tourism are getting busier to the point that it kind of takes away one of the big reasons to go there in the first place (to get away from others). I was surprised how many people we saw on Googs Track, and that is not a heavily publicised track by any means. Apparently the French Line through the Simpson Desert is seeing 30-40,000 vehicles per year. However it is great for the rural economies, and if they didn’t exist none of this would really be possible.
Personally, it doesn’t really bother me. I have never really been a ‘10 things in Australia you need to see before you die!’ type guy. I would rather discover something not on any list. Also, we have been doing it long enough, and have enough confidence and capability to just explore in our own way. Most people just don’t think about it like that, and aren’t really to set up to do it anyway, even if they wanted to, which they don’t.

The wind did come that night, but the tent held firm. Much to fellow campers amazement the next day… Right, I had had about my fill of talking to (albeit mostly very nice) old people, you’ve probably had your fill of me writing (and ranting) about a caravan park… We packed up and headed out.