Then another detour on a rough as guts dirt road, that skirted the edge of Lake Newland Conservation Park.

Having been spoilt with the stunning scenery of the last week or so, I decided to stop beating on the Land Cruiser and head back to the main road. This will keep for another day.

So we rolled into another tiny costal town, Elliston. This campsite was the sort of thing I had been looking for, small, nearly no-one there, nice grassed sites. I was happy to spend couple of nights here and have a ‘rest day’. These longer trips are all about a balance for me, yes of course you want adventure, exploration, all that good stuff. However I have always been a fan of just lounging around for a day or so, if you find the right spot and you have the time. Well we had, and we did. 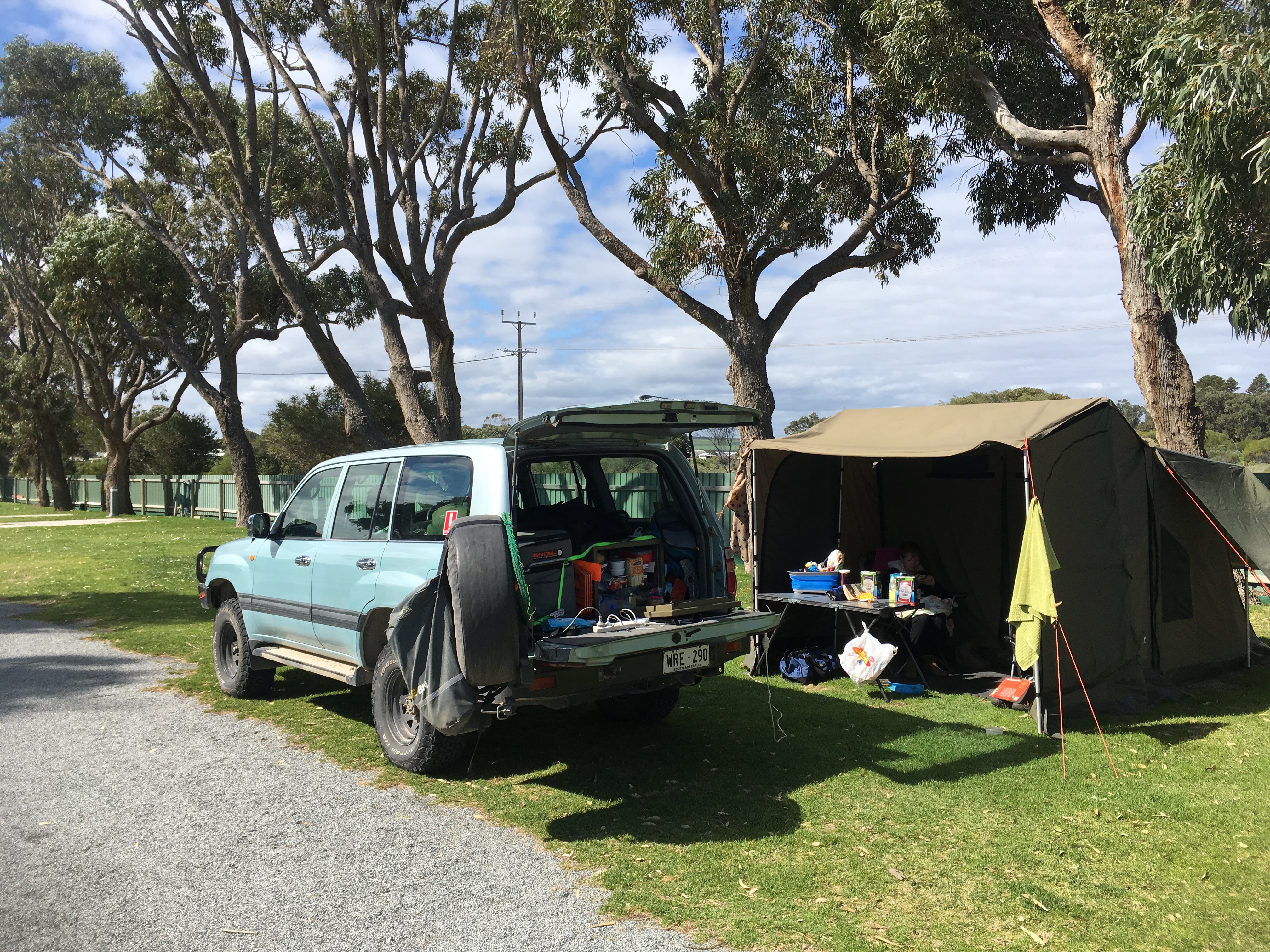 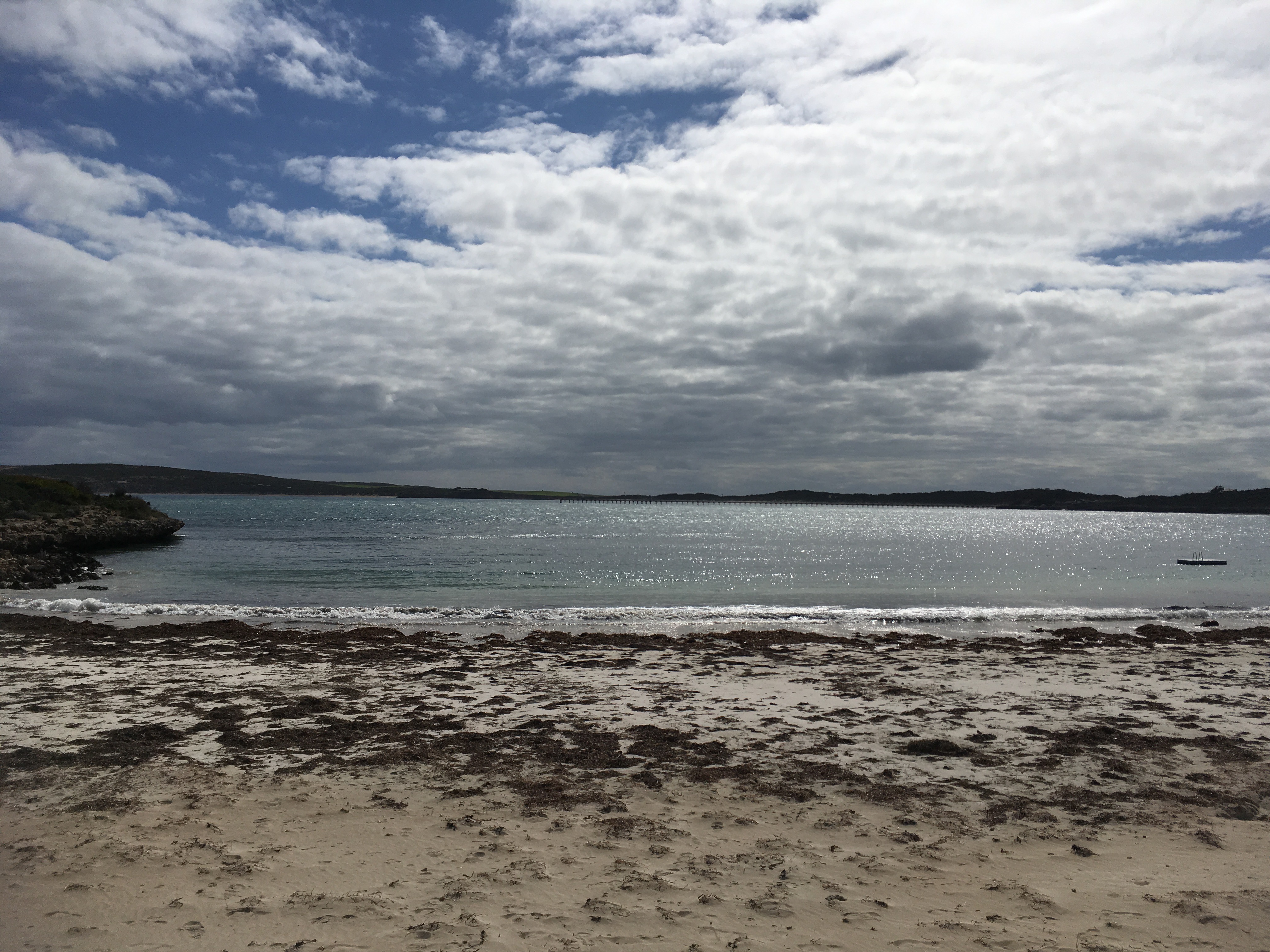 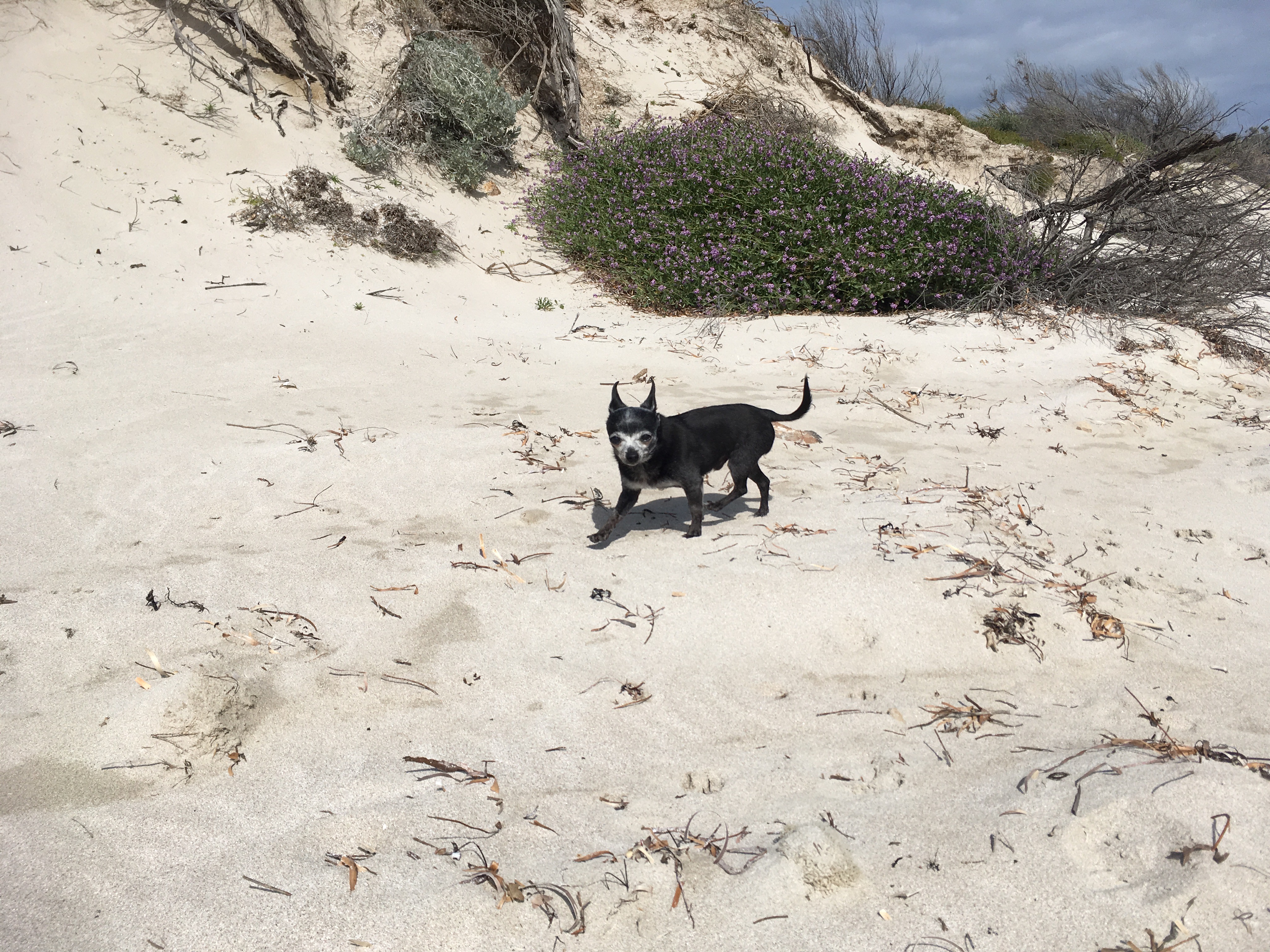 Well rested after rest day. We load up the Cruiser and burbled out of the park. We had a few k’s to do today, but not so many we couldn’t try a few alternative routes.

Looking impossibly green for South Oz, and again reminiscent of the UK. 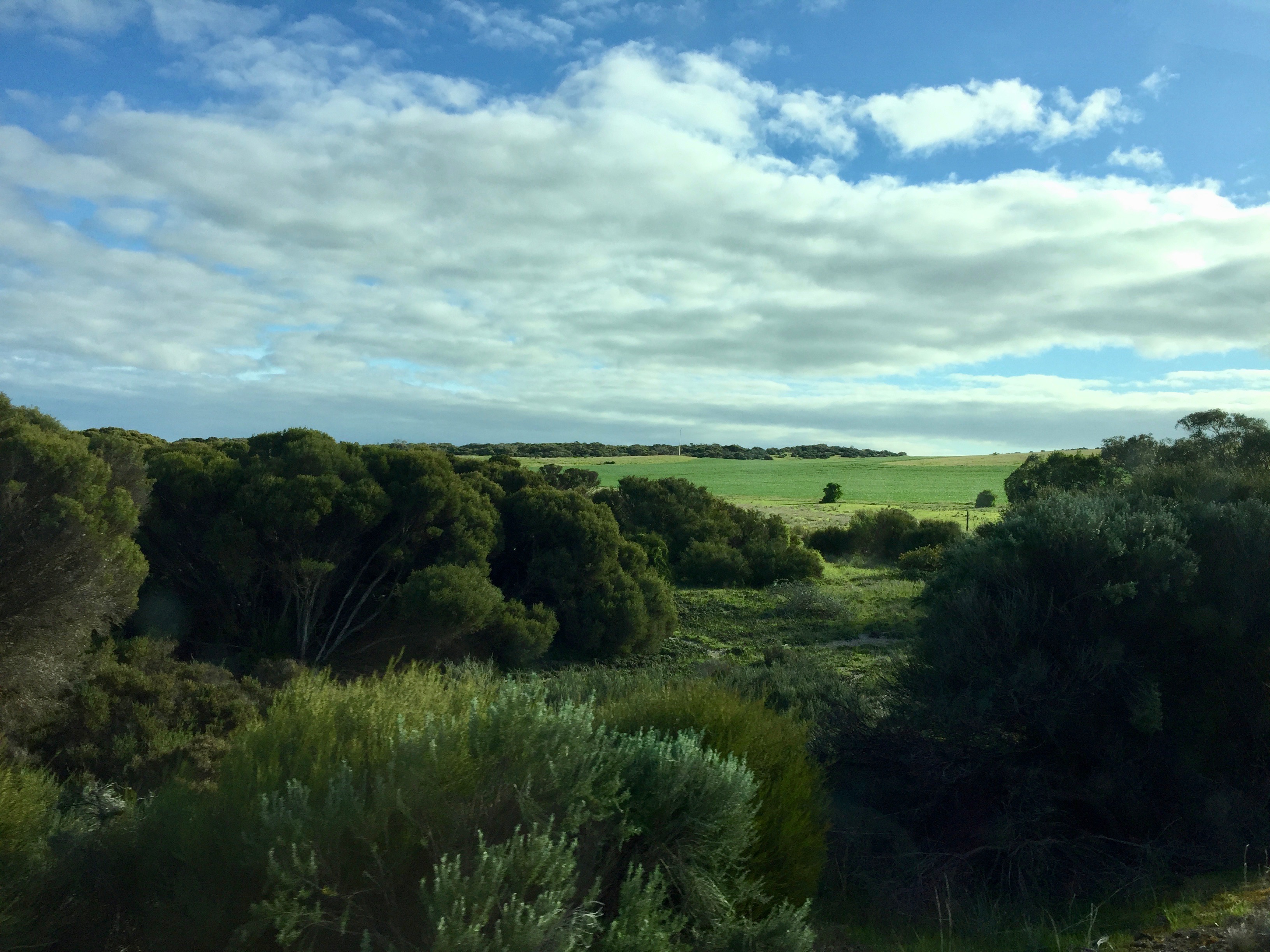 Specifically this could be the New Forest. We headed down this foresty trail, only to get to a locked gate, so back to the black stuff. 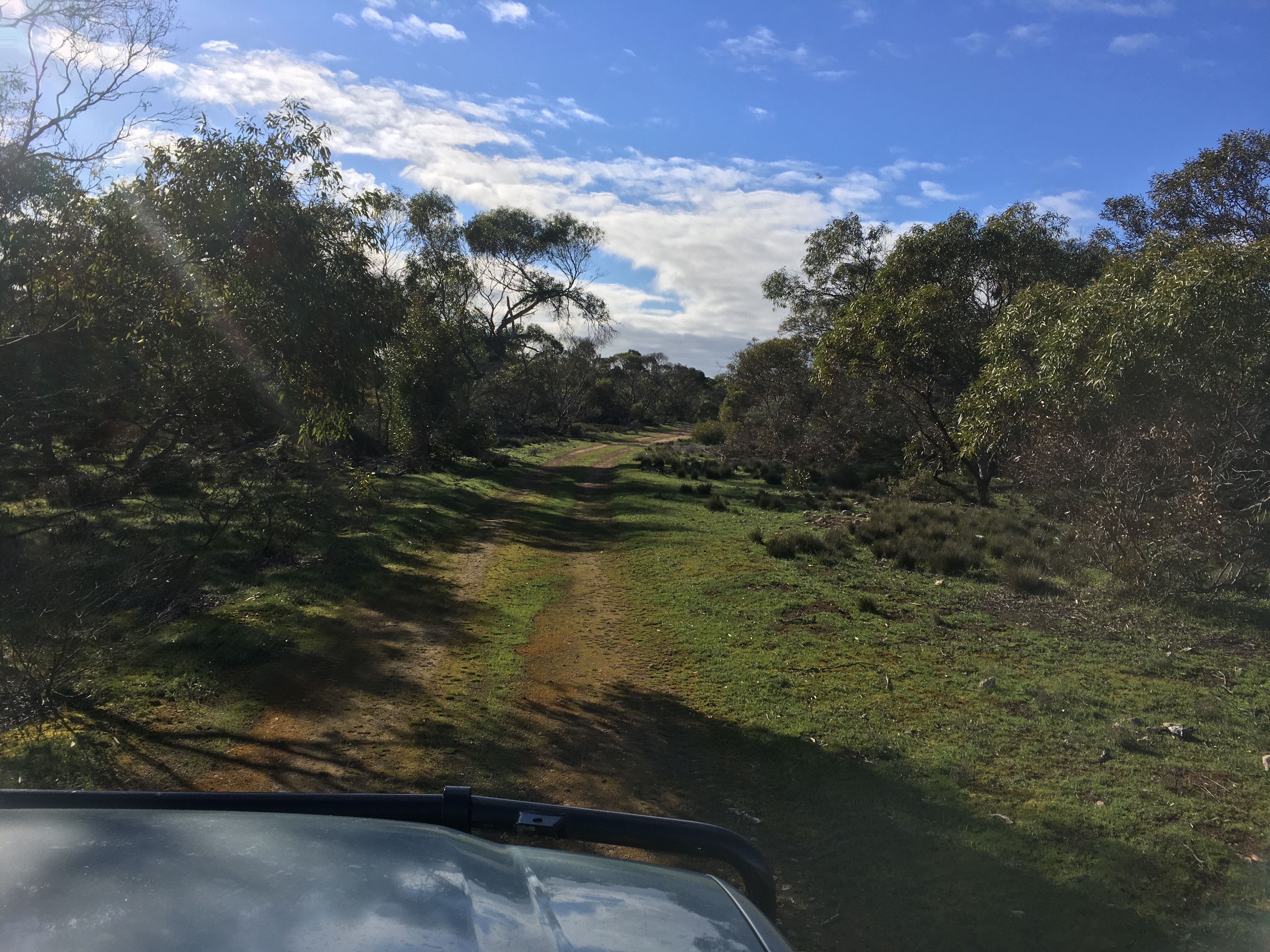 However we did find an off-road excursion later, through Hinks Conservation Park. Scene to a recent bushfire. 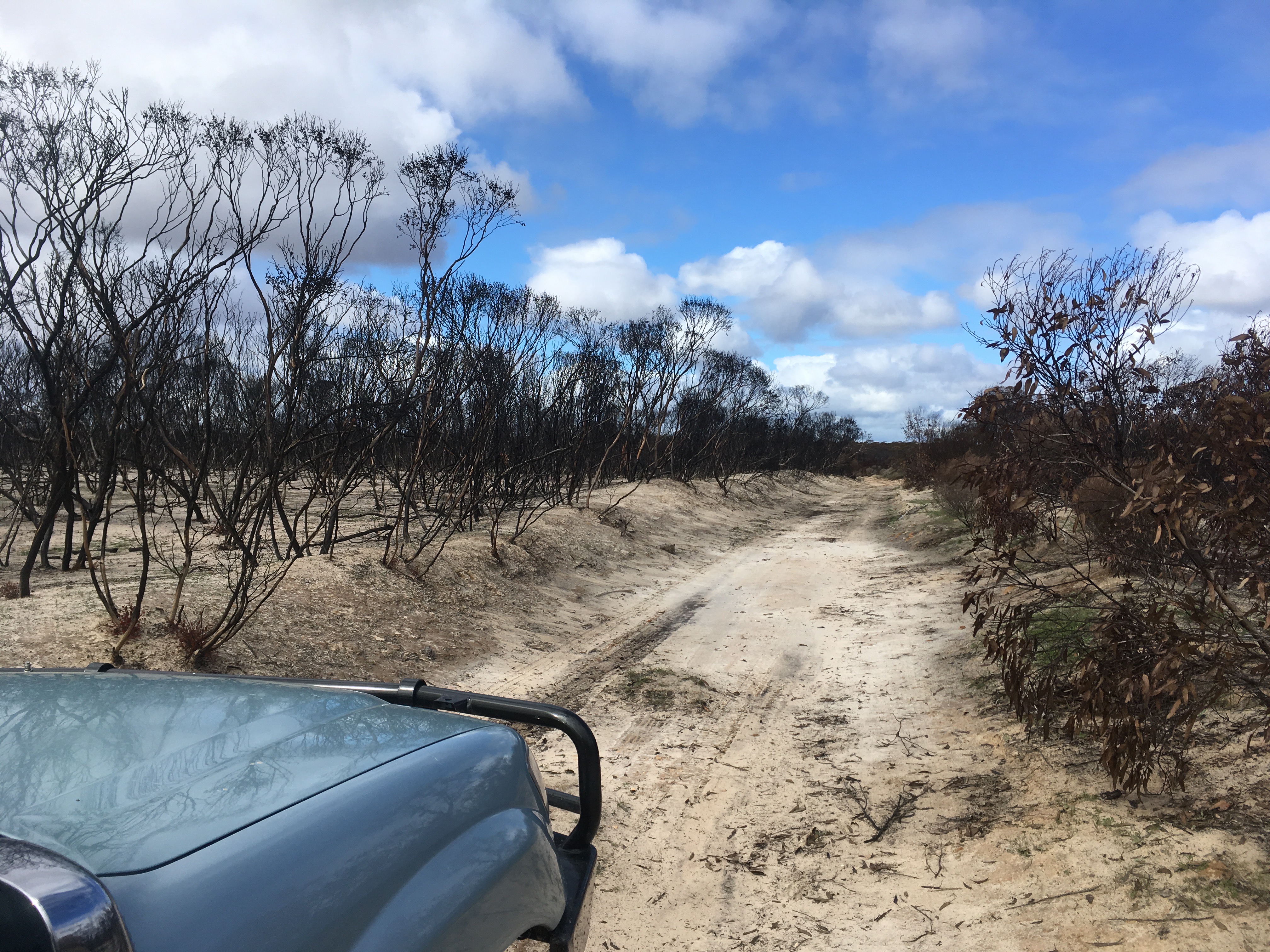 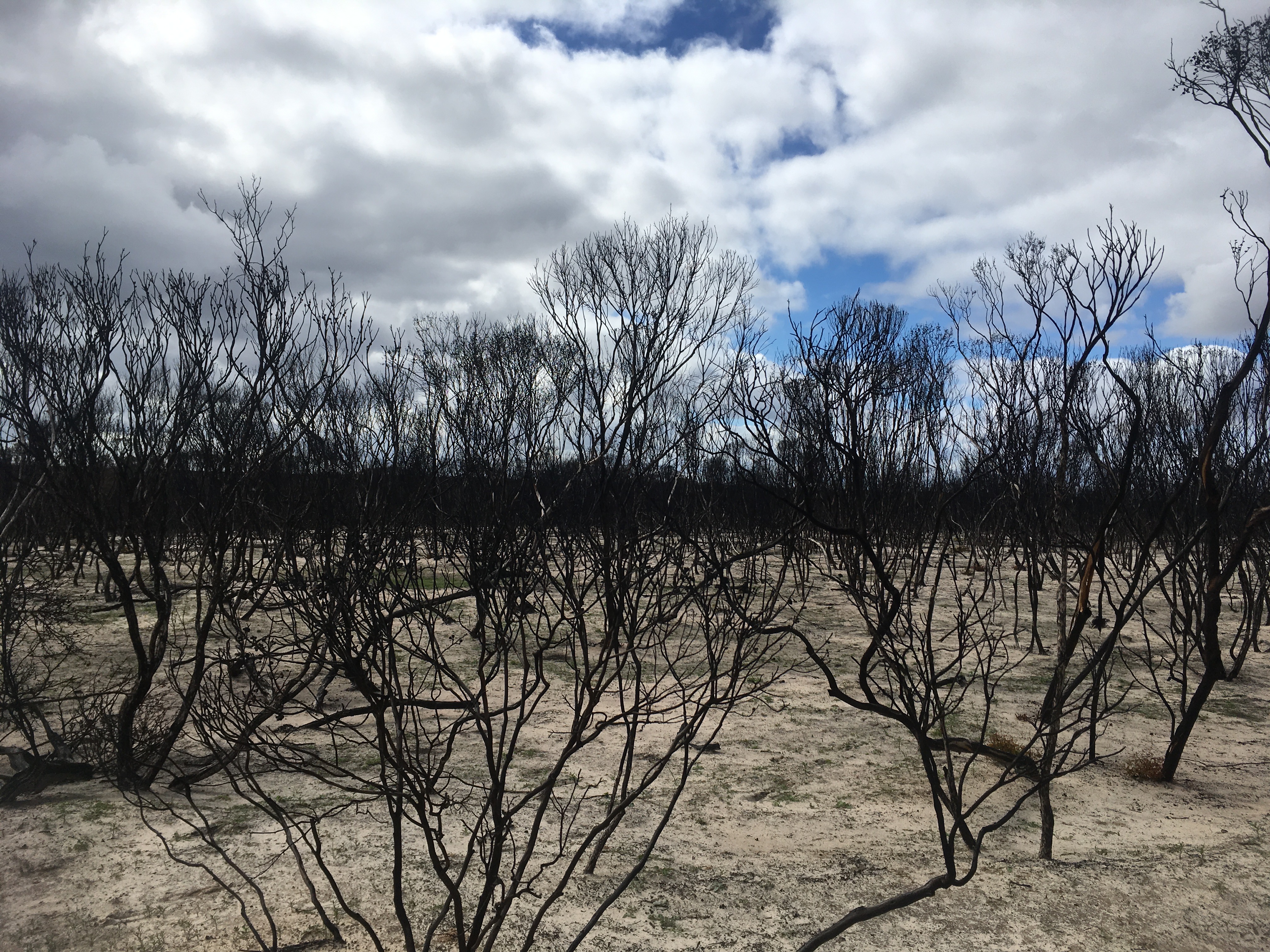 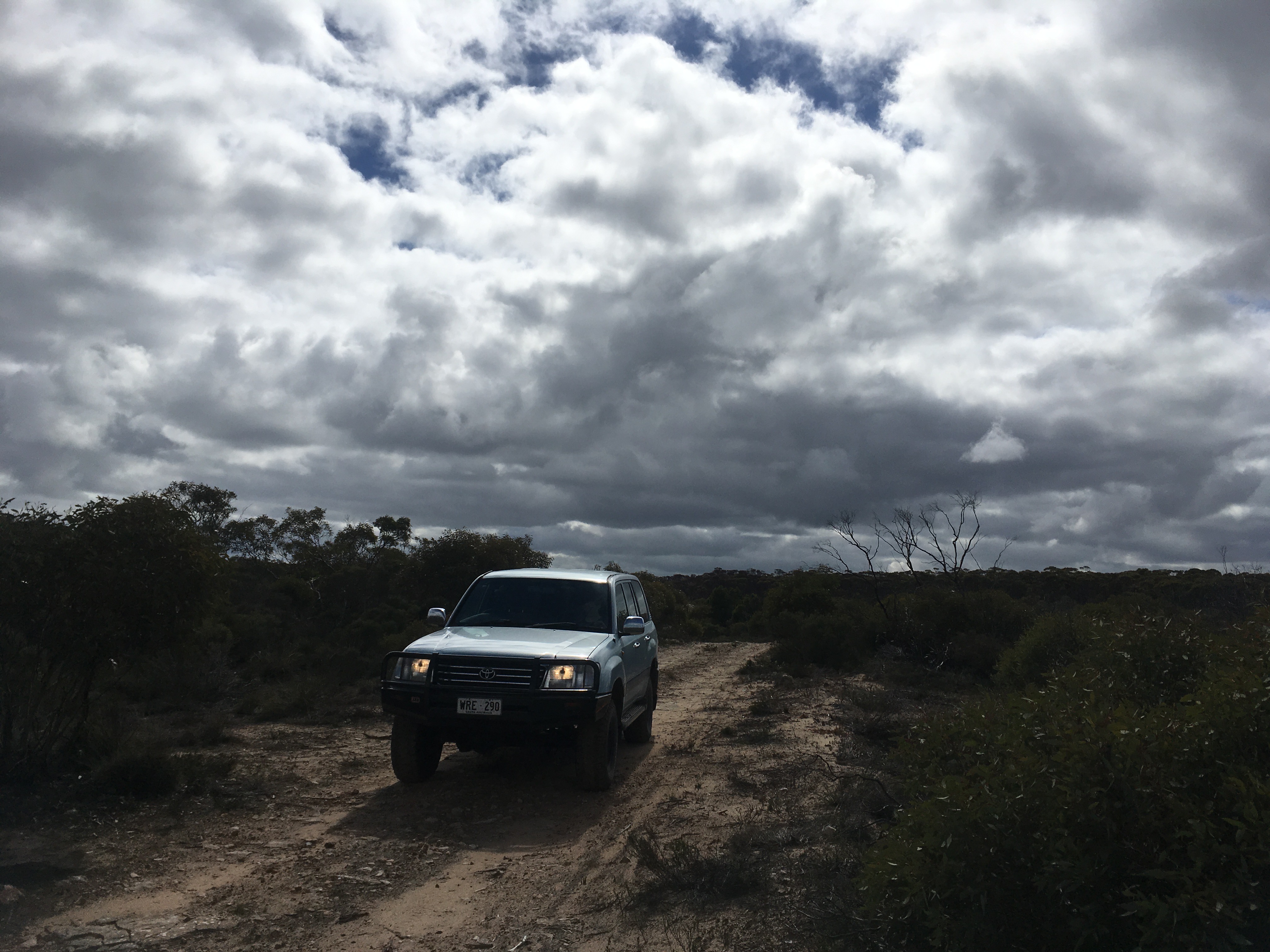 With the farm tracks also providing some scenery as we crossed the body of the peninsula, west to east. 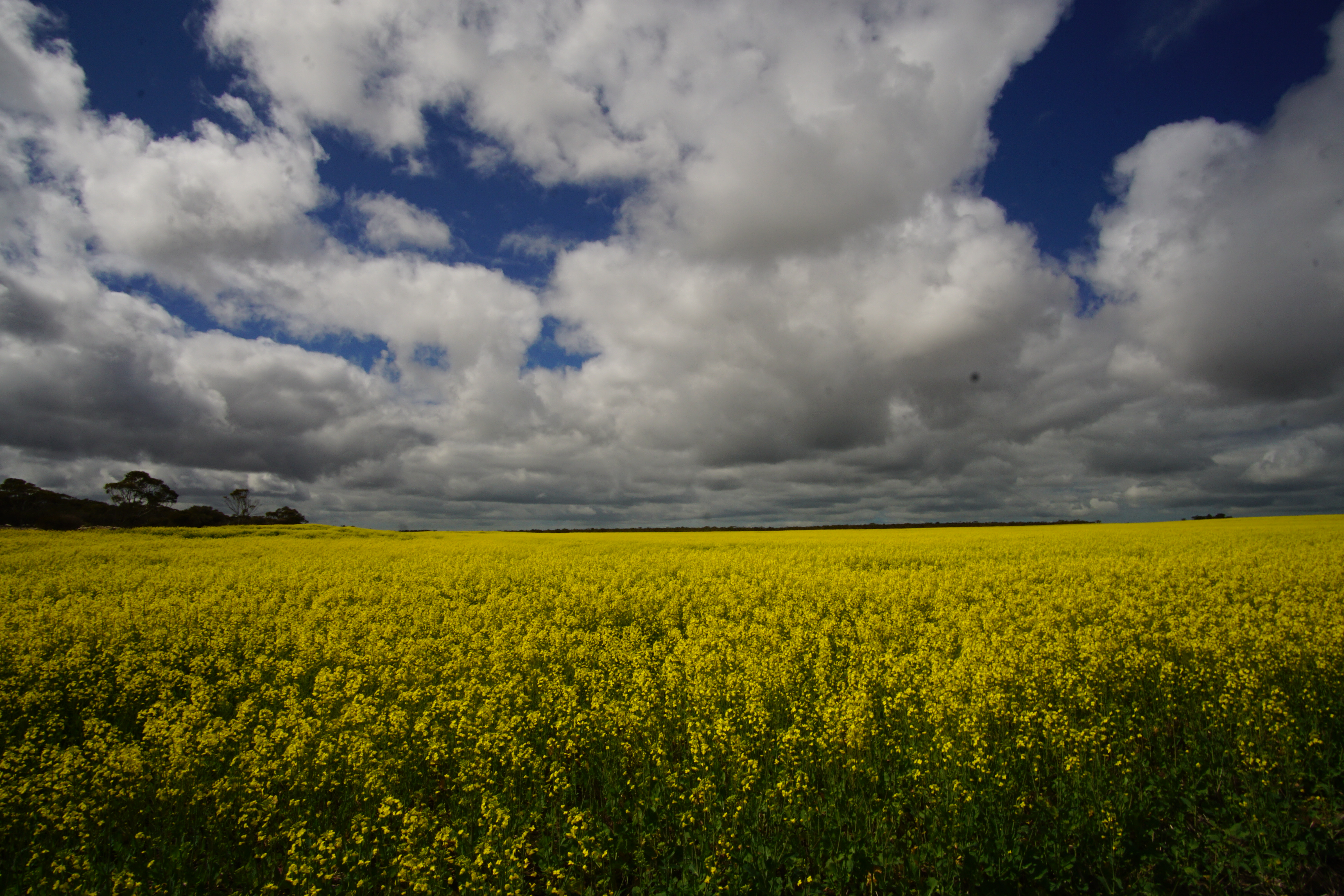 Eventually hitting the main arterial road that runs up the east side of the peninsula, north was the direction home, so it felt good to hang a right, south, towards Lincoln National Park.

We had been to this park before, with the lads in the Range Rover last year. However we only really checked out about half of it, and there was a track through the dunes that I intended to do last time, but didn’t make it after getting lost (in a good way). First though a stop in the relative bustle of Port Lincoln, to top off fuel and supplies.

The busyness is a little confronting after hanging out at beach campsites and sleepy coastal towns. Having said that, I like Port Lincoln. It comes across as a town with a purpose. Many Australian country towns can have a somewhat downbeat, just hanging on feeling about them. That creeping sense of decay, that there are basically too many towns than are sustainable in the modern world. I have often thought that if many of these smaller communities got together and combined three or four small towns into one, and made that the main focus for the region it would be much more successful than a handful of stragglers. Easy to say from the outside looking in. I digress…

We press on to the park. We have booked to stay at Maclaren (sic) Point, broom broom. When I say booked, this is bush camping down a track that is labeled 4×4 only, so it’s first come, best dressed. However, I am confident by staying away from the easy access sites with facilities we should be in a minority at worst.

Thankfully the turn off for the campsite is well signposted, although it doesn’t stop me overshooting it the first time, so indistinguishable the track is to the surrounding bush. Rough and rocky, a short but steep enough to require low range climb at the start. This is good, should detour any casual campers (my word, I’m an unsocial git!). The track is rough, especially at road pressures. The light is fading and it is not very far to the campsite so I elect not to deflate the tyres and just take it easy over the rough parts, of which there are many. Although this fallen tree is not going to let the Cruiser past. 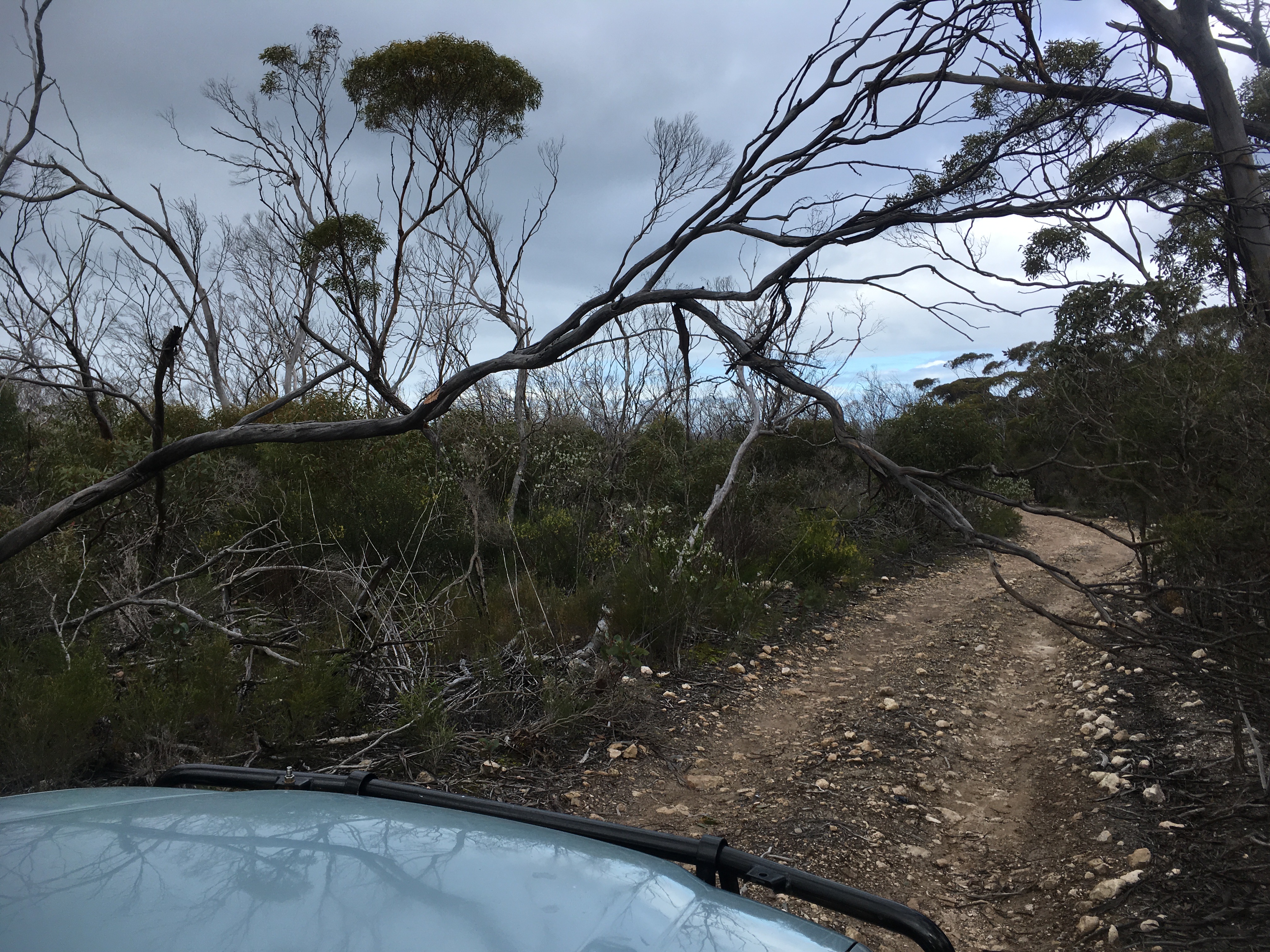 A couple of hacks with the parang told me this was not the tool for the job.

[as an aside, we had one of the trees in our yard trimmed where it was overhanging the neighbours yard. I had the tree surgeon leave the branches behind, they will make good firewood in time. I have many wood cutting tools, but in the end I broke all that wood (apart from the big stuff) down with the parang. Partly because I wanted to get familiar with that tool, but also in the end it just was the most effective way. Of course the more I used it the better I got with it. Knowing how and where to strike the wood, and how much force to use. Where a well placed good strike will see you straight through, using less energy than multiple flailings. It was remarkably effective on anything up to about wrist size]

I keep the cutting tools ready to hand, and the bow saw whipped through this tough and hardened piece of wood with relative ease. 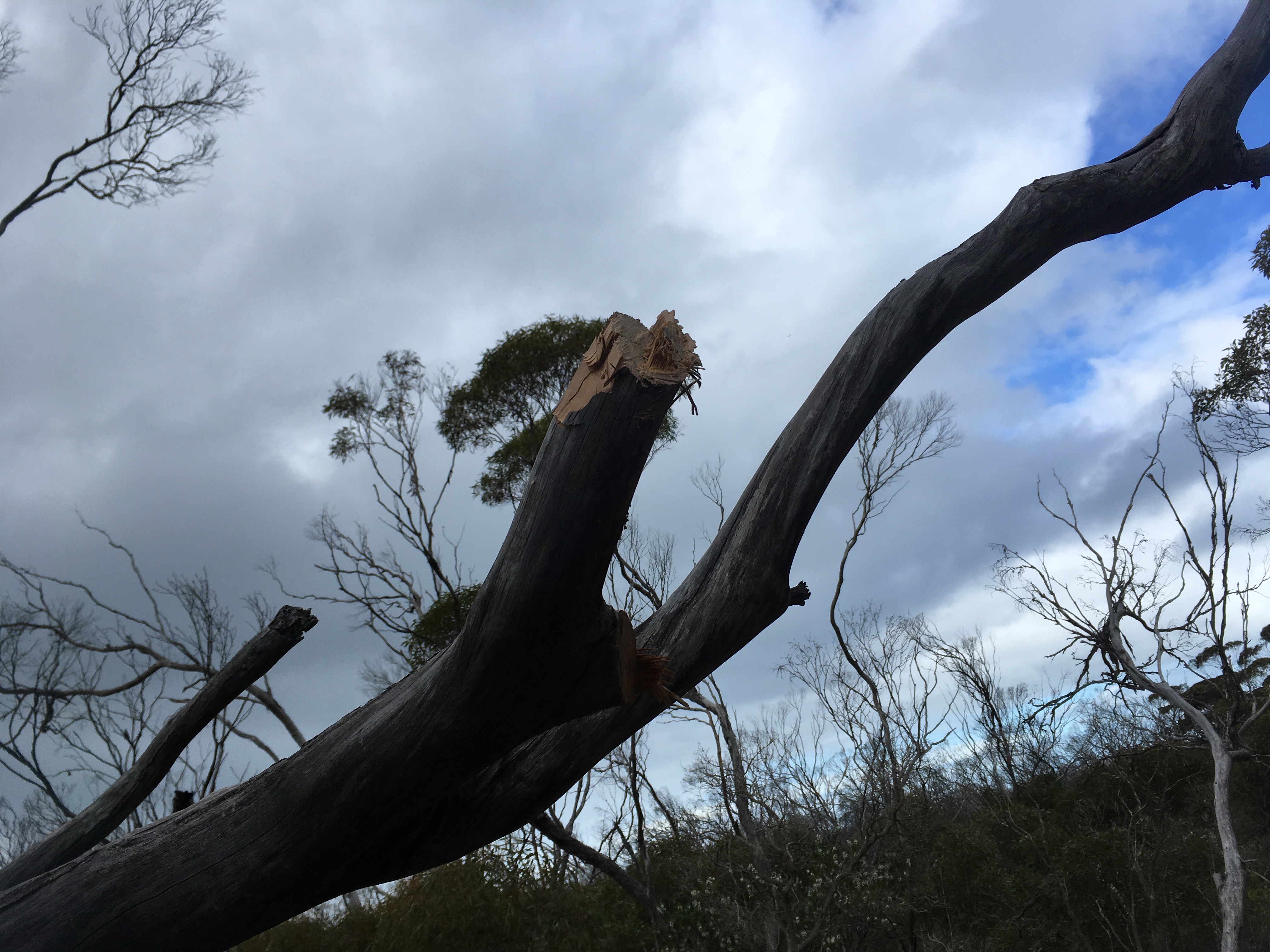 With that we pushed onto the camping area. 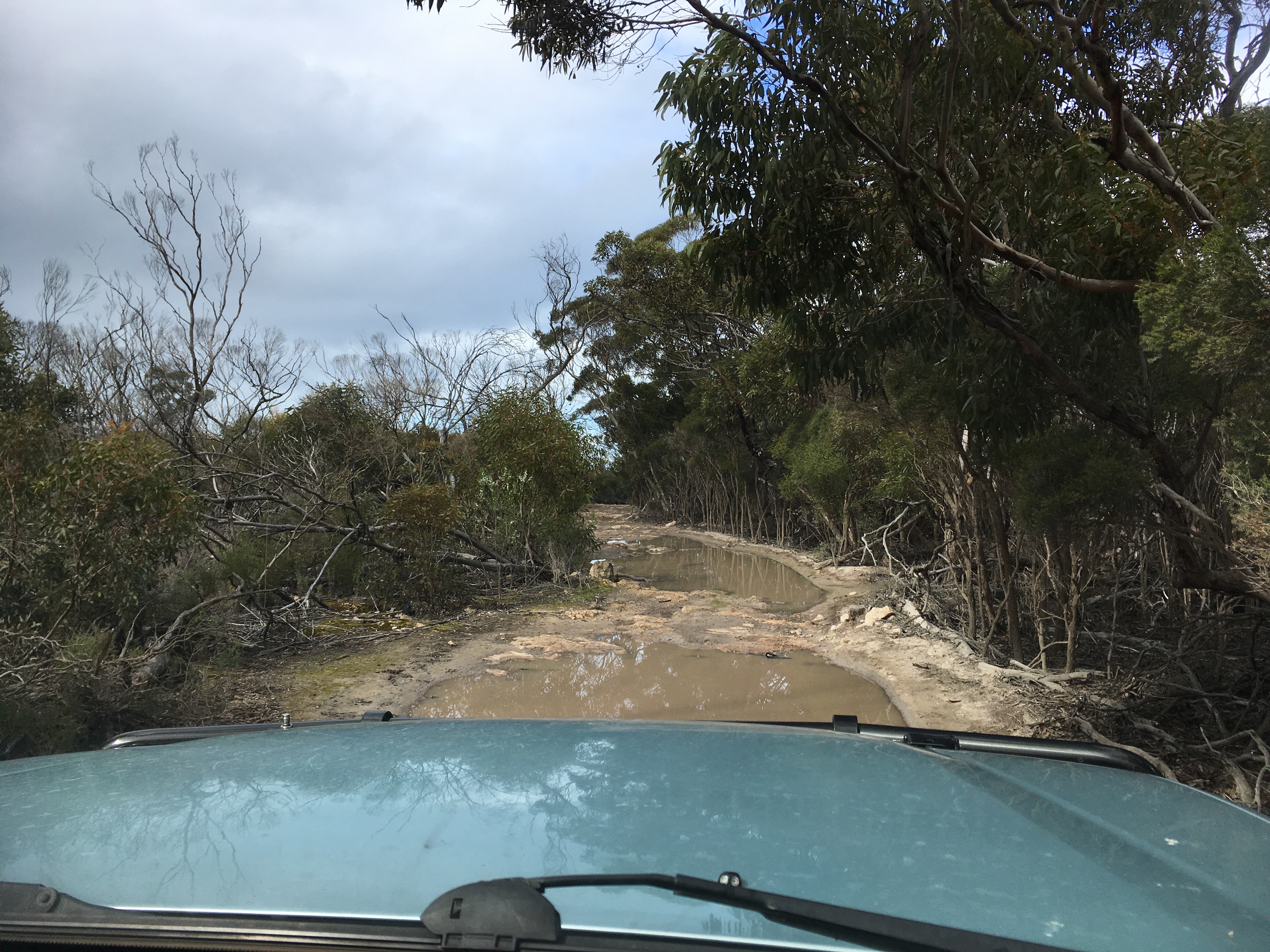 Winding through more tough and twisted coastal trees, saw us pop out at a rugged and beautiful stretch of coastline.

We set up what was now our standard arrangement for this trip. OzTent with the sides on the front awning, lovely, then the rain came. Proper rain, not just a coastal drizzle, running off the awning it was forming a pool, time to go up a gear. 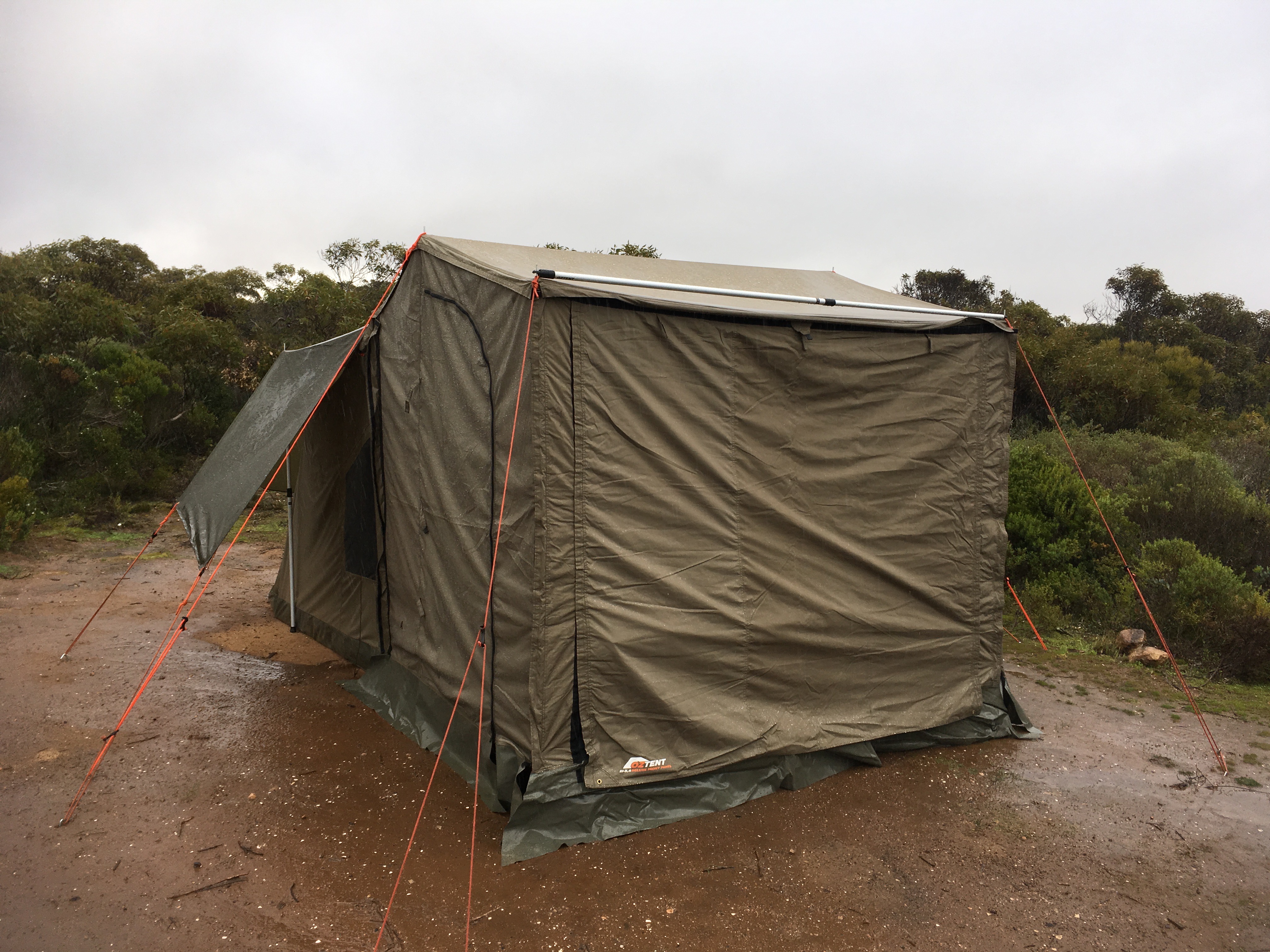 Fully enclosed, we were now totally sheltered from the elements. This was actually the first we had used all these extra panels whilst actually camping, and it was slightly weird to be sat in quite comfortable chairs, in a ‘room’ while the rain came down outside. All we needed was a roaring fire and it could be Sunday afternoon at home.

Anyway, I wasn’t cooking inside the canvas so I set the ever faithful Trangia going outside. 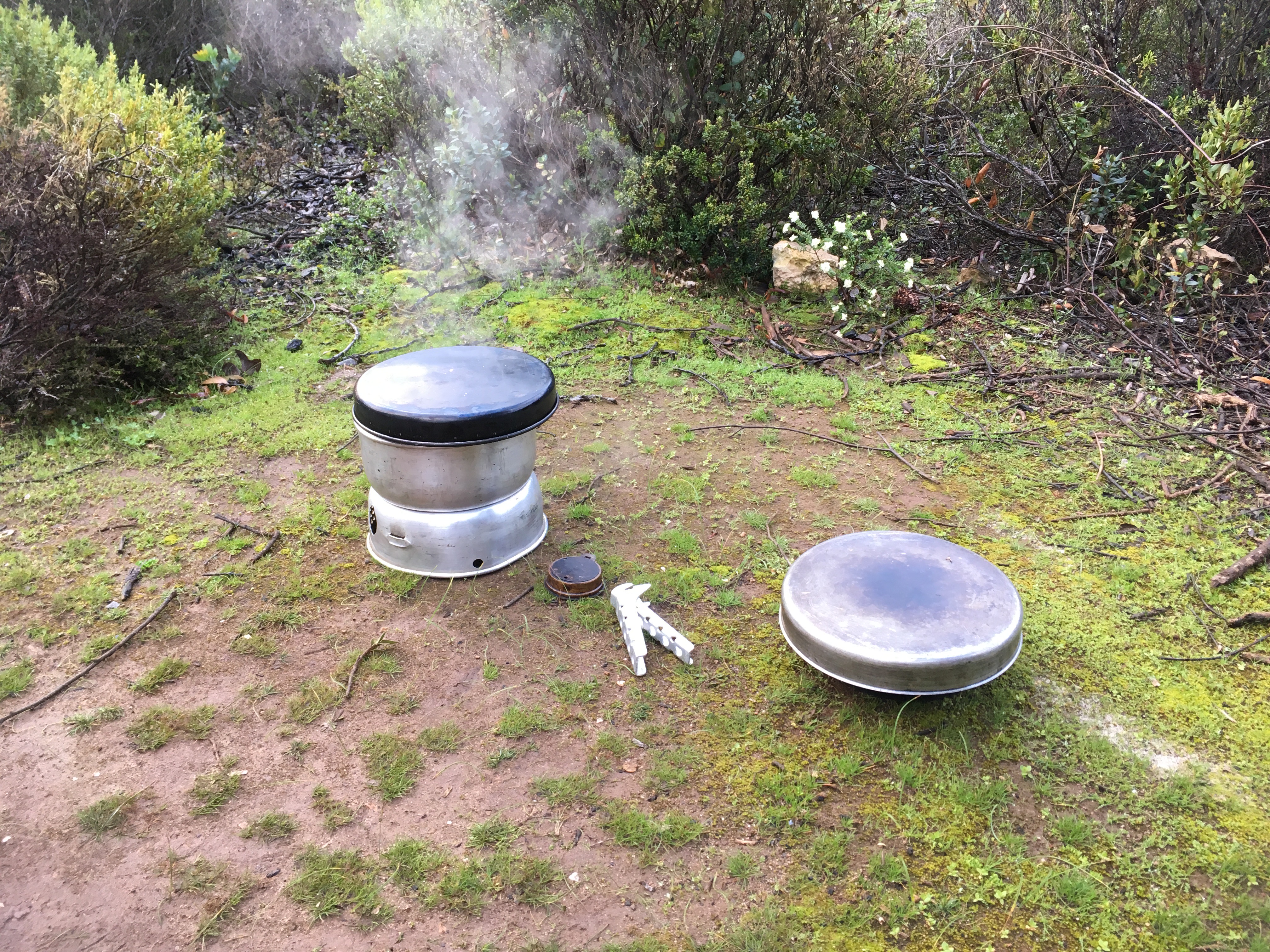 By now the rain had eased to the point it might as well just not bother, and left everything bathed in a calm eerie blue light. 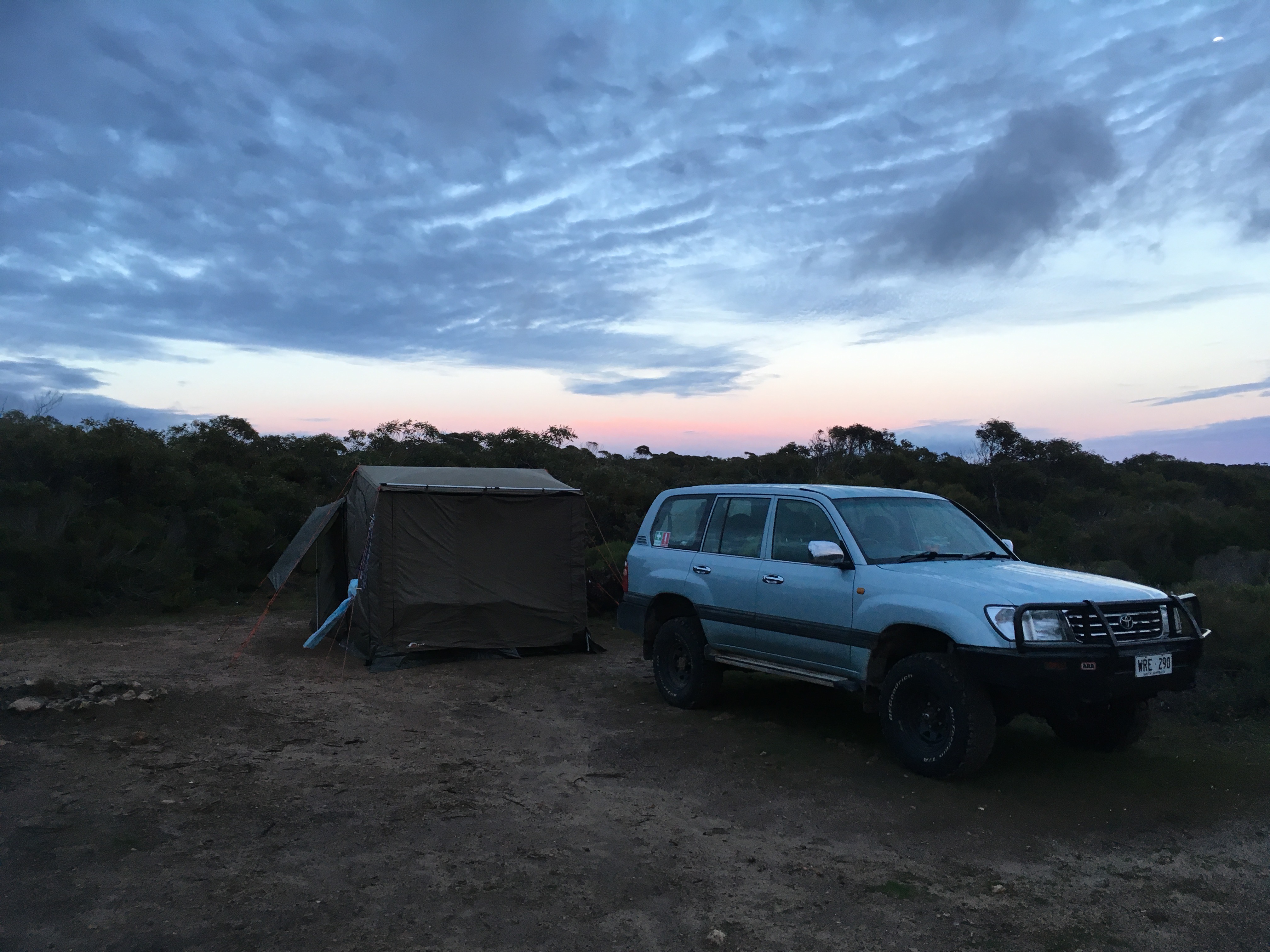 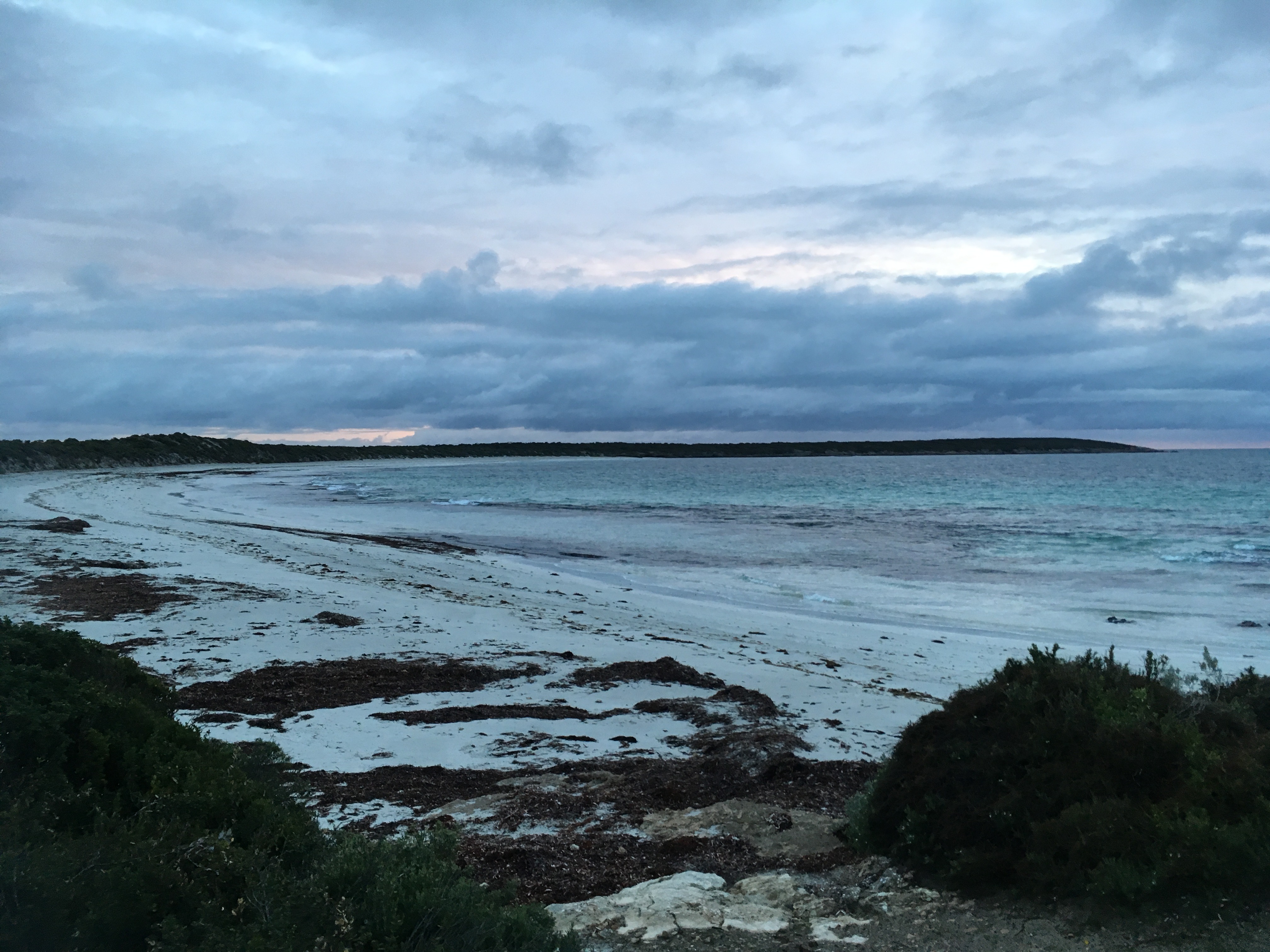 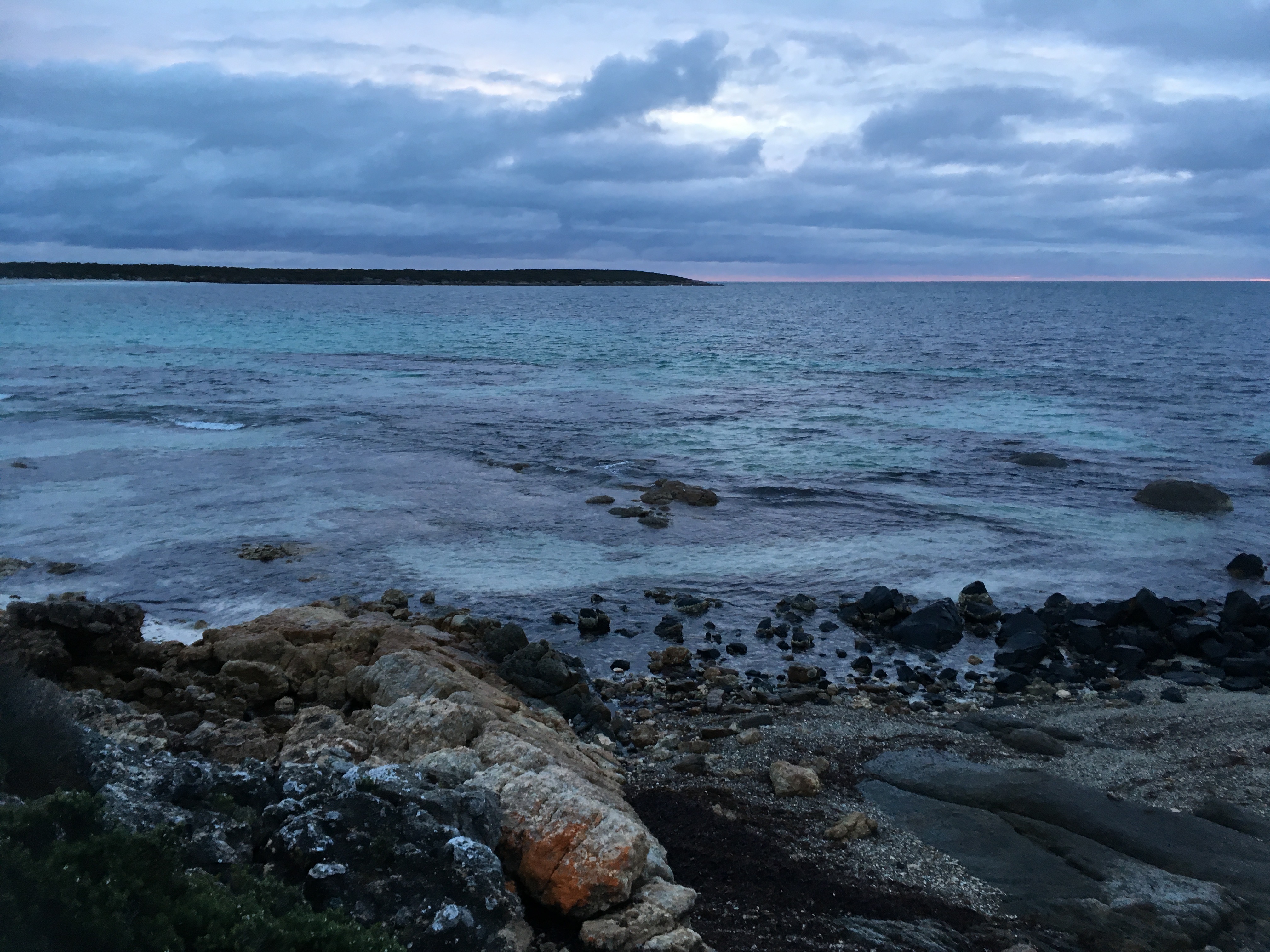 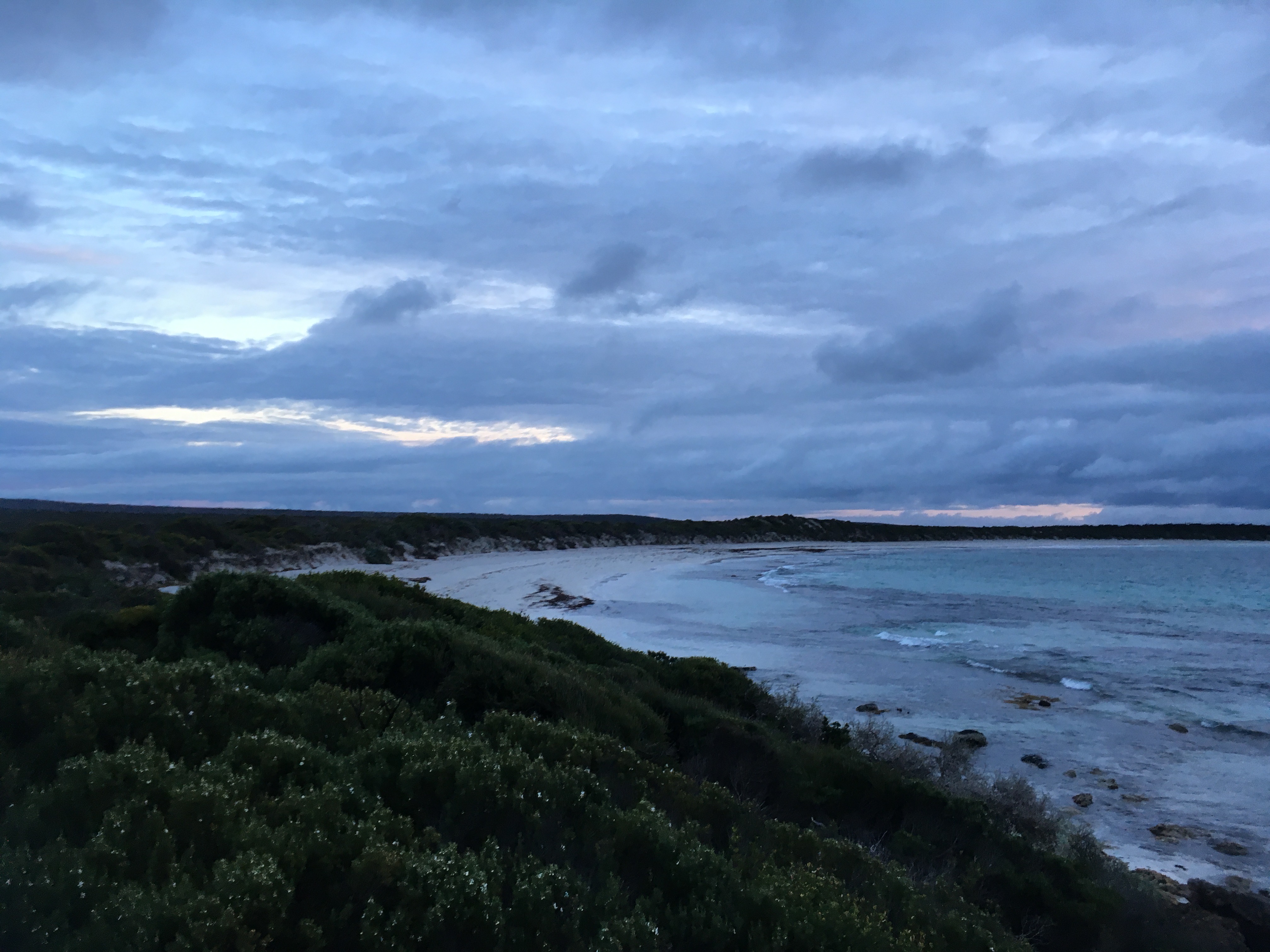 As night was falling we heard the sound of an engine. An older Nissan Navara came down the track to where we were, gave a quick wave and proceeded to drive as far as you could (not far from where we were). Fisherman.

As much as I would like to regularly catch our supper, in these coastal spots we find ourselves. I’ve never really given fishing the time or the patience it requires. The most success I’ve had is ‘yabby nets’ where you can just bait them, leave them and come back later for your (hopefully) dinner or maybe just an array of varied seaweed (as was the case this time). So it never ceases to amaze me at the passion and dedication of true anglers. It took us about an hour to get to this spot from Port Lincoln (safe to say that was where this chap had come from), so with local knowledge and more speed you might cut that to say 45 minutes, 40 at best (not to mention the track here is pretty rough going). Dude then fished for two hours till it was properly dark, before driving back out. Interesting way to spend your Friday night, but as ever, each to their own.