This is our old Range Rover, on the second morning of our big trip up through Queensland. Three people, dogs and a desire to be self sufficient meant there was no room to spare! Good old Rangie.

Packing our gear into the truck is something I used to leave to the night before, or the night before that, and I never enjoyed it. Now I make sure I pack the majority of the load at least a week out. Or really, nowadays the trucks is either loaded (the rule) or unloaded (the exception).

Occasionally the Land Cruiser gets pushed into services other than an touring rig, and so this was recently the case with having to transport seven adults who probably should know better, trying to recapture their youth watching Fatboy Slim in McLaren Vale, South Australia. For the record, Fat Boy smashed it out of the park.

Anyway, that’s the first time I’ve run it as a full seven seater, it did a pretty good job really. All our touring gear takes up a fair bit of space unloaded, so I was keen to get it out of the house and back in the truck. After removing the second and third row seats again, I took the opportunity to weigh the truck ’empty’, as I had weighed it almost fully loaded before our Best Western Trip last year. This would obviously give me an idea of how heavy our load was. Once you get into this stuff, if you’re not at least thinking about vehicle weight, you should be.

A completely empty truck is also a perfect time to think about how you load it, and ‘audit’ what you are loading it with. Is it all still relevant? Can you cut anything out? Is there anything you might want to consider adding in? Again, good reason to do it with no time pressure.

Like most, our set up has evolved over many years. It suits us. There are many ways of doing things for touring, you just have to work out what works for you. I often wonder if I was starting with a completely clean slate, how much would I do differently? I like to think the answer is not that much. Somethings don’t change just because it’s just not worth spending the money twice, but I try to think pretty hard, and seek the advice of people who KNOW, before putting anything of reasonable expense on/in the truck. 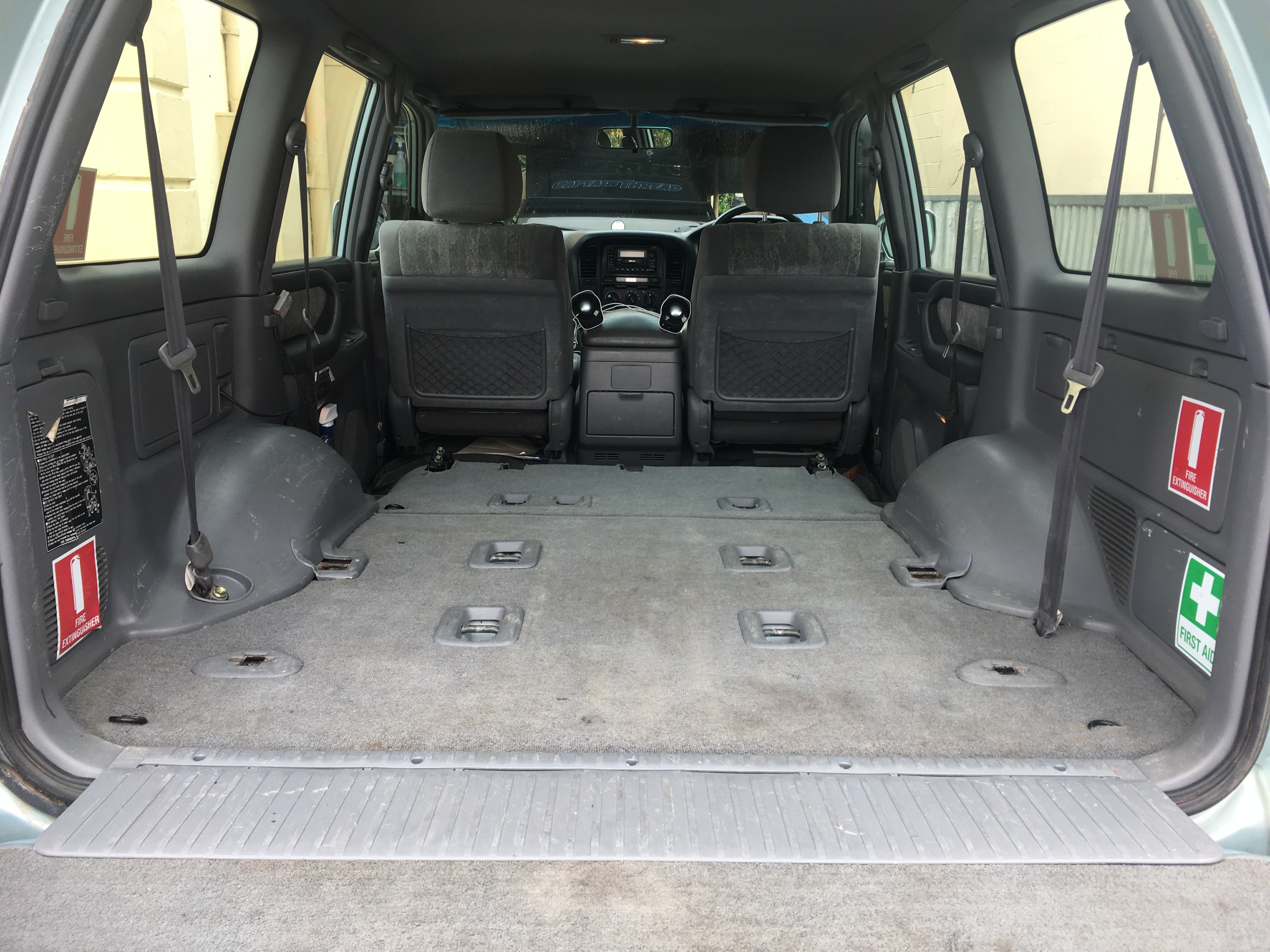 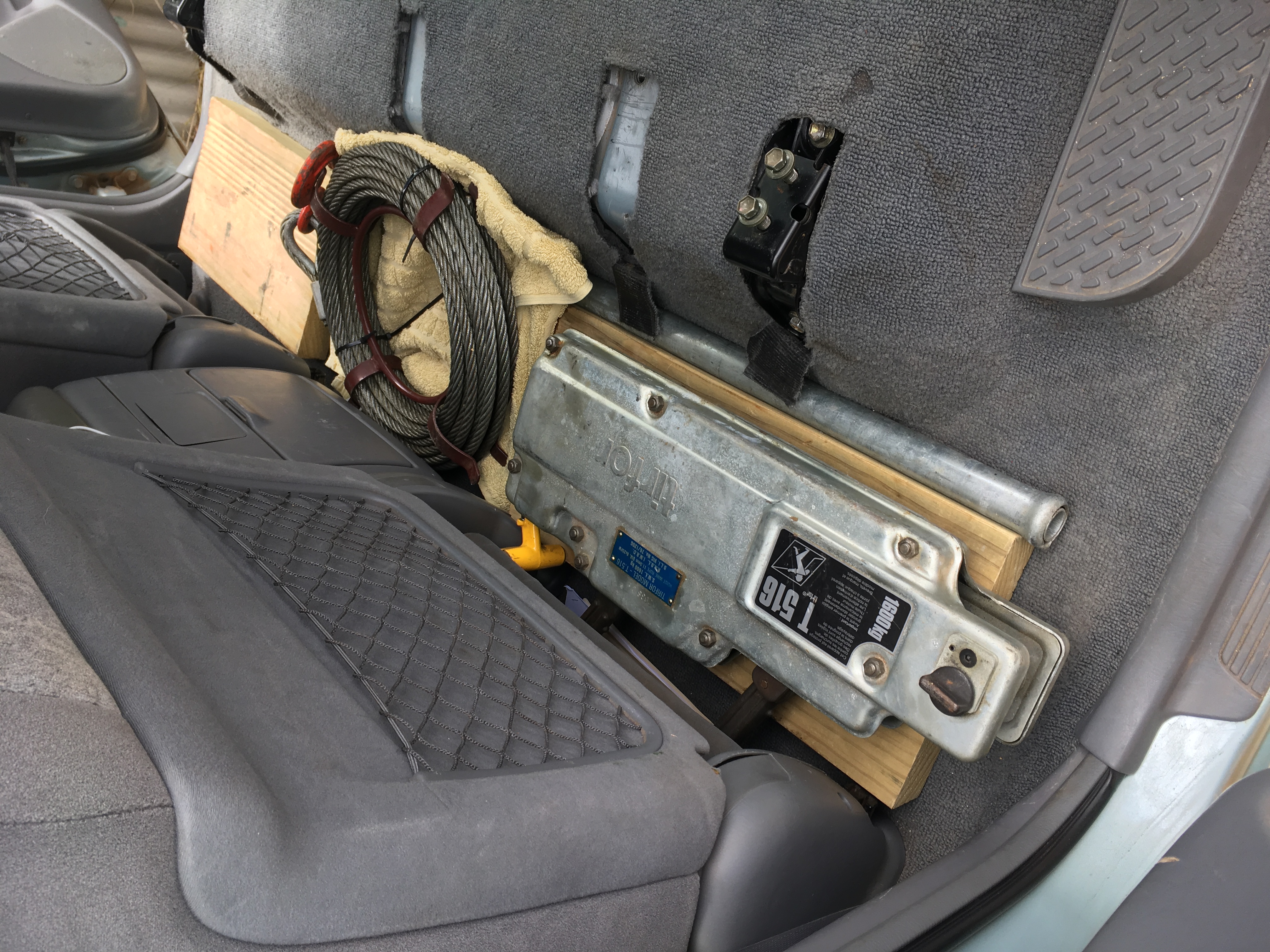 You want the heavy stuff down low. Also most of this gear is not something you need to access regularly or in a hurry. If you need to hand winch in a hurry, you got problems..

So the Tirfor and the wooden blocks go behind the front seats, stuff will get packed on top of them. The old bath mat is under the winch cable just because it is a touch greasy. 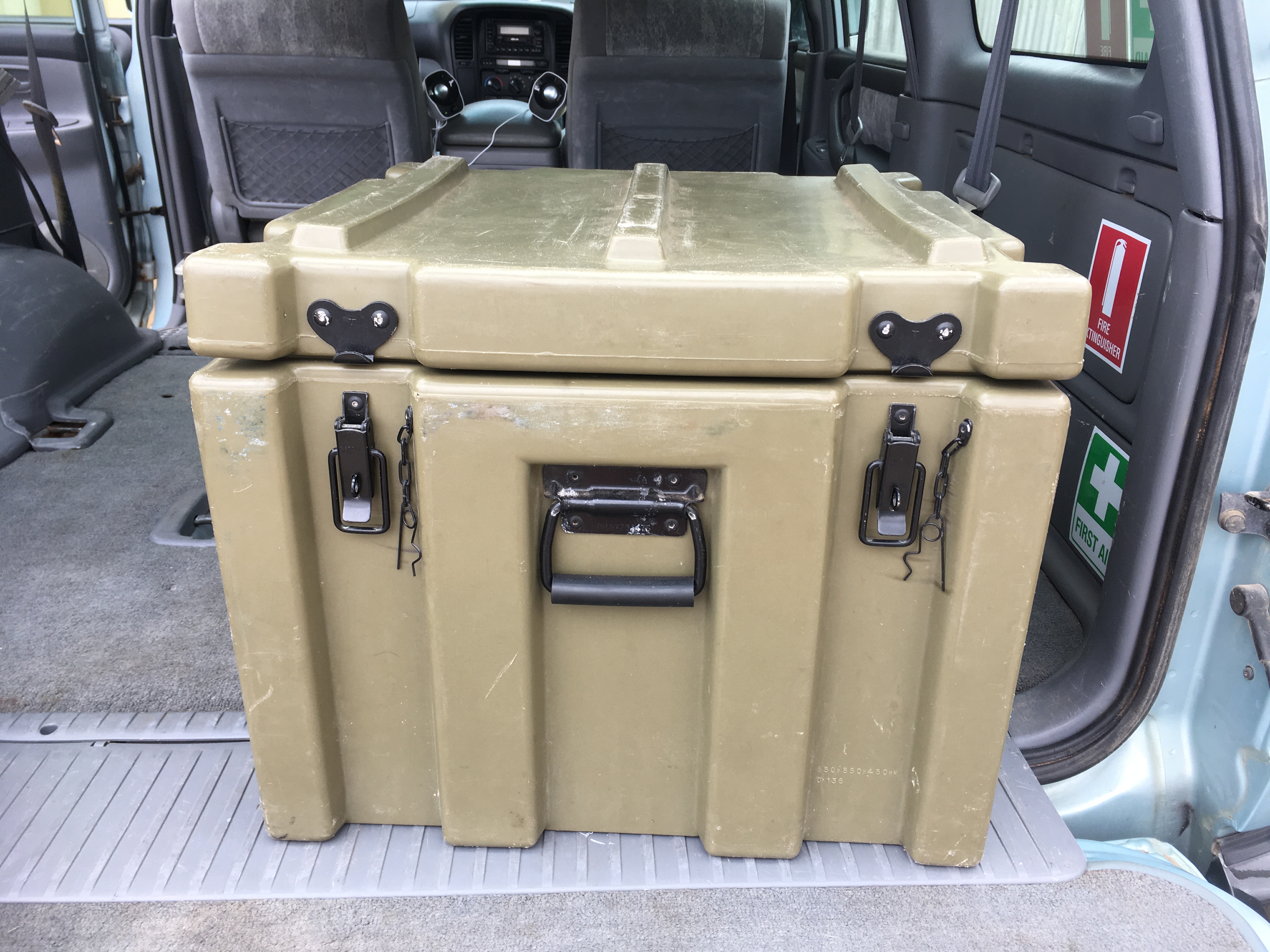 Next up? What I am now calling the ‘oh shit’ box. This is a box of stuff that hopefully provides a few solutions when things don’t go to plan for us or others. Again most of the stuff isn’t something you need in a hurry, however always the two things that always get packed last in here are the snatch strap, ‘damper’ bag and two shackles. If we are in snatch strap (coastal) territory then I tend to have this stuff out and ready to go, however even in the box I can have this out in less than a minute [it should be noted that hasty snatch strap recoveries are the worse sort of recoveries, but not everything can be a calm risk assessment before proceeding].

Other things in this box, and some potential uses: 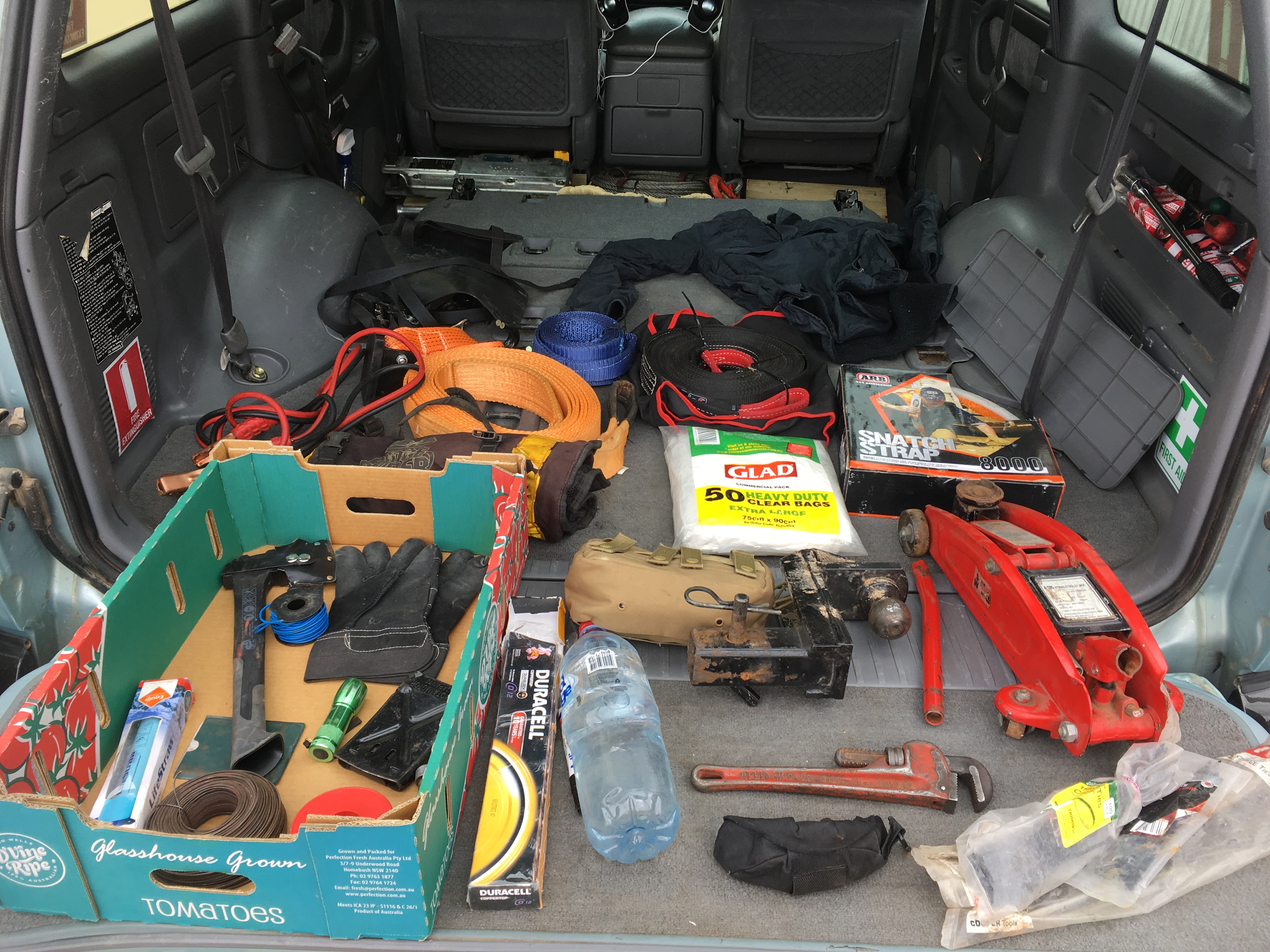 Tow ball, step down for the fact the vehicle is lifted. I carry this even though I don’t tow regularly. As this box is almost always in the vehicle, it is there if I need it. However, I think it will come out now for the longer trips, as it’s a weighty old thing.

Small trolley jack. So useful and stable this is the jack of choice for most situations. My mate Tim Huber has one on skids rather than wheels for off-road use, I’ll convert the next one I buy like that. This one, is one of those cheap buys that just won’t quit.

Extensive tyre repair kit from Outback Extreme. Despite the name, this is an American company. It’s a great kit, and they have been great to deal with. This is the insurance policy for not carrying two spares.

Buffalo Special Six Shirt. Easily the best piece of outdoor clothing I’ve ever owned. Getting on for twenty years old now (this actual shirt). Not so crucial in Australia, but still a ‘go to’ piece of gear. Also, like a Leatherman, just one of those pieces of gear that makes you feel more comfortable for having it around – y’know what I mean?

A big pack of D-Cell batteries. There is a medium Mag Lite torch in each of the front door pockets, so we both have access to a torch easily. As I write this I think maybe it’s time to change those Mag Lites for something a bit smaller, lighter and rechargeable. Although being a decent size means they are hard to lose, and being halogen means the light is easier on the eye than LED’s. Anyway low priority for now.

These are the things I’ve decided to leave out from this box, the axe is not required as I have a bigger and better one that we will take, and I only remember about this torch when I unpack this box at times like this – I appreciate such a small thing makes little difference, but as ever, the devil is in the details. I’ve since added the monkey wrench back in… 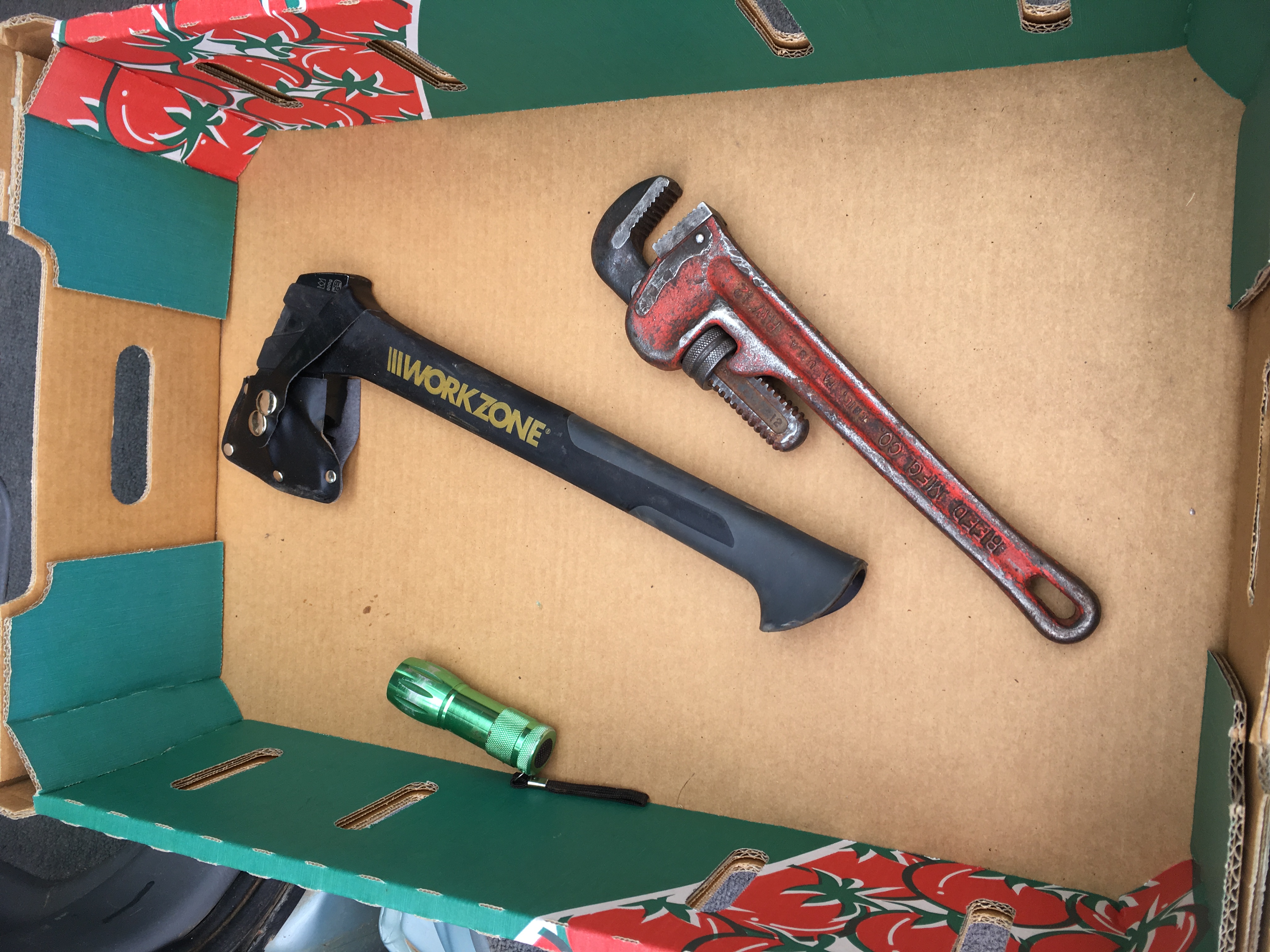 So that’s that box packed and in. 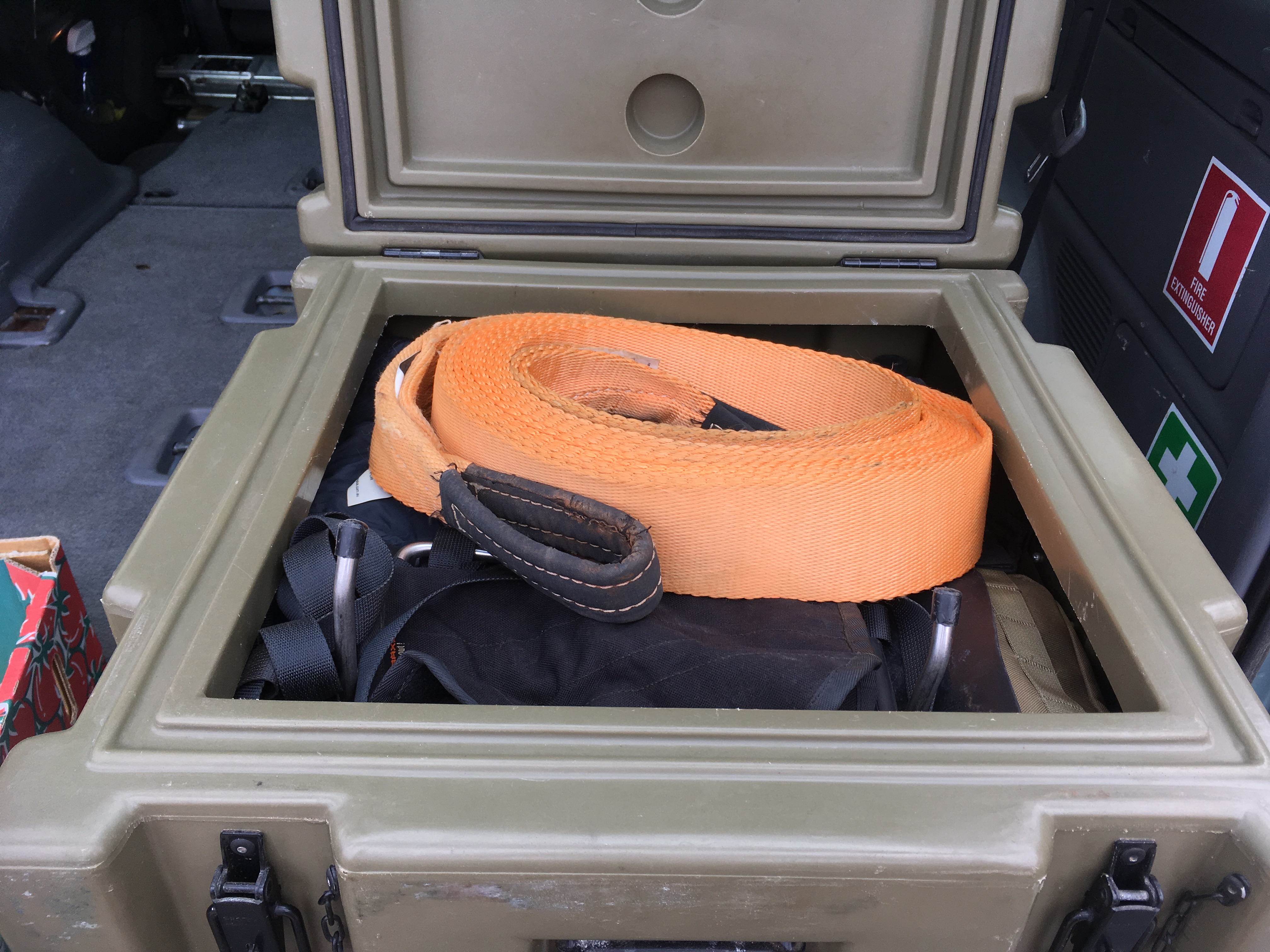 German Uber retailer Aldi, blazed into the South Australian market about a year ago and has quickly switched onto the fact that there is a big market in camping and caravanning. I bought this collapsible washing-up bowl made by Companion brand, from a camping shop last year. It seems Aldi has done a deal with them to sell the Companion designs (cheaply) under their own label. While we liked the original washing up bowl, the plug ‘feature’ was a pain in the arse frankly and the ribbed bottom was hard to keep clean, and so when I saw these products at Aldi I went to get a bowl without the plug, and to check out their other stuff.

It should be noted the these sorts of products are part of Aldi’s weekly ‘Special Buys’ at their cheapest on a Wednesday and a Saturday of the given week. I showed up at five minutes before they opened on the Saturday in question, only to find a queue about 150m long of Grey Nomads.

I hung back, fearful of the silver haired ones (although I’m getting there…), not wanting to get between them and their caravan washing machines…

[Aside, this shows how switched-on Aldi is as a retailer. They have got the Australian market sussed for all this outdoor gear. I presume they have teams combing speciality retailers for what are the key lines. Should I shop there for this sort of gear? As someone who believes in supporting the businesses you want to still be there next year, and the year after that, maybe not. However, the stuff I buy at Aldi I wouldn’t buy from those stores, I’ll only try it because it’s cheap. If I like it maybe I’ll get the full priced version when this one craps out. Second part of my excuse is I’ve spent, and will continue to spend $$$ at speciality retailers ongoing – shout out to Snowys!]

Anyway, I digress. Back to the packing the truck.

Next up is the ‘pantry’. This is the second ex-Army box in the truck, this one has a front opening lid and a shelf (or two) inside. This is basically where our non-perishable food lives while touring. Plus the other things relating to food, cling wrap, foil, washing up, etc. Also a few things that are just handy to keep in here, bug spray, mozzie coils, spare metho, etc. I guess I use these boxes in the same way that most people would use a draw system – the advantage being you can move them where you want, and it is not a permanent fixture. So if the weather is terrible or whatever, and you want to sleep in the truck, that’s an option.

On our last big trip I found that good containers were better than cling-wrap, tin foil, or whatever for storing foods. So I grabbed a load of those too. Plus a mixing bowl, which might be overkill, we will see.

Also in the Aldi splurge I bought a new drinking water hose. This will replace the dodgy length of very old garden hose I have an stashed in the truck for a few years now, for easy refilling of the water containers in-situ, plus washing the Land Cruiser, etc. This is actual food safe hose, unlike what we have been using for X number of years…?

That’ll do for now. More to come.