Ok, where were we?

About halfway there. Two main boxes in, now time for the water jerrys. Four of them, 80 litres in total. This is actually 20 litres less than I ran the last big trip. We haven’t, as yet, come close to tapping into the 40 litres I like to keep in reserve between water fill ups. So time to try cutting this back by one jerry can, a seemingly risky prospect in a country as large, remote and dry as Australia… However, these are the compromises you have to consider for any of the gear you take. More weight just impacts everywhere, wear on the truck, how it drives, fuel consumption, how it performs off-road. It may seem silly to fret over 20kg here, or 20kg there, but if you just let it slide before you know it you are 200kg or 500kg over GVM 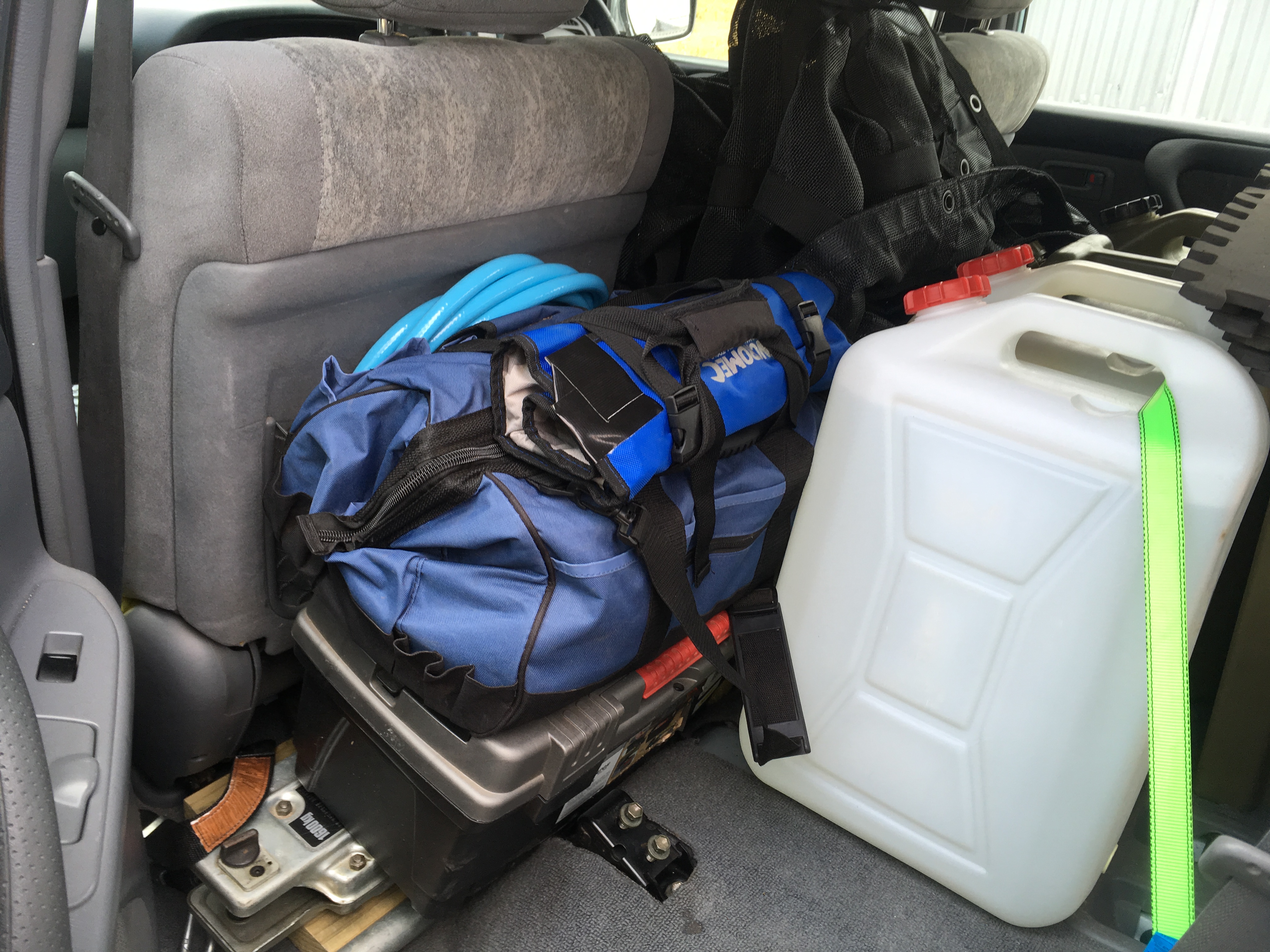 Now time for the ‘Land Tools’. A long handled shovel, this would be my recommendation as the first piece of equipment you buy for anyone starting out. It may take more time, but it will get out out, eventually, of many situations. Plus 100’s of other uses in general day to day outdoor life.

A Hi-Lift jack. Generally not recommended by the Australian 4×4 community in recent times. As it is potentially pretty dangerous to use. However, its ability, versatility and reliability means I still carry one, despite the weight penalty. Being a solo vehicle much of the time, you have to consider solutions to problems when the only other solution is to hit the button on the PLB…

Good axe by Stihl, and a Bahco bow saw will take care of most trail blocking/firewood requirements. If somewhat more slowly than a chainsaw, I have one, just haven’t had enough reasons to carry it in the truck as yet. 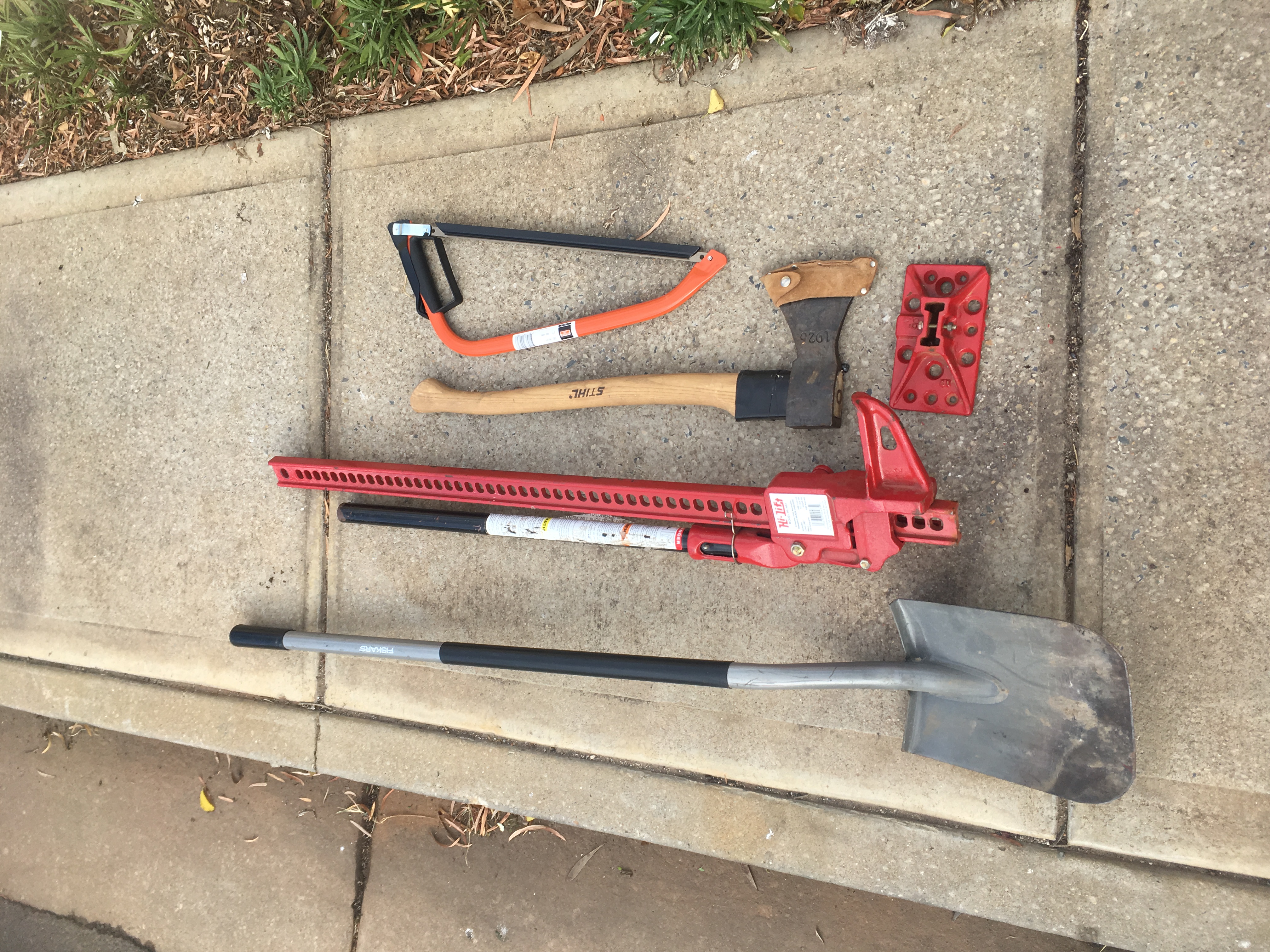 In with the our trusty Engel 40L fridge. Perfectly reliable in the 10+ years we have been using it and just the right size for two people. Plus our Outback Thumper power pack, that has been going as long as the Engel (with having had its battery re-packed once in that time). With the MaxTraxs nestling between the fridge and the pantry for quick and easy access. 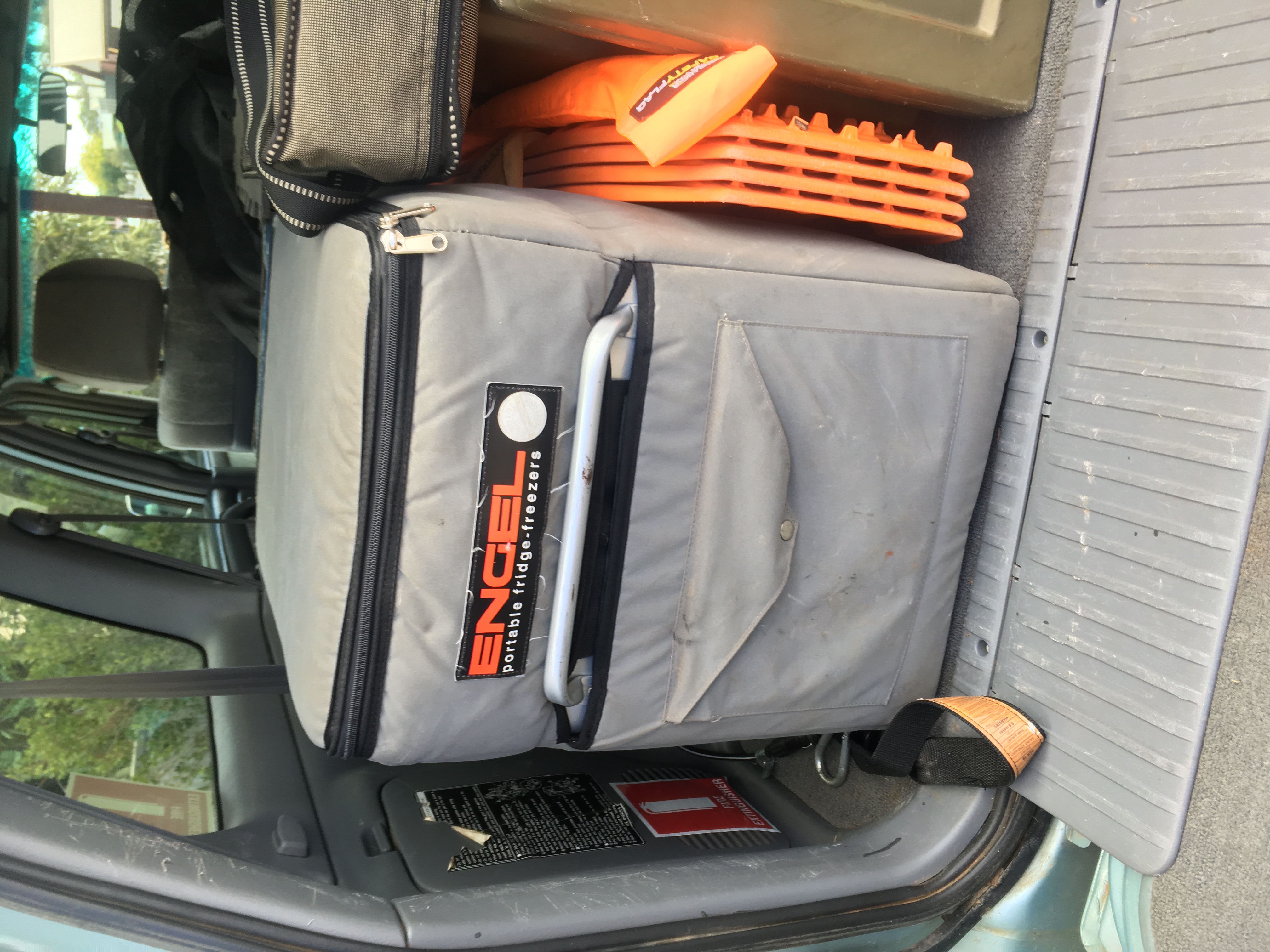 So what is the blue bag that has sneaked into the photos? That contains our ‘kitchen’. In there packs the Trangia plus chopping board, plates, mugs, glasses, etc. The tool roll on top has the cooking utensils. 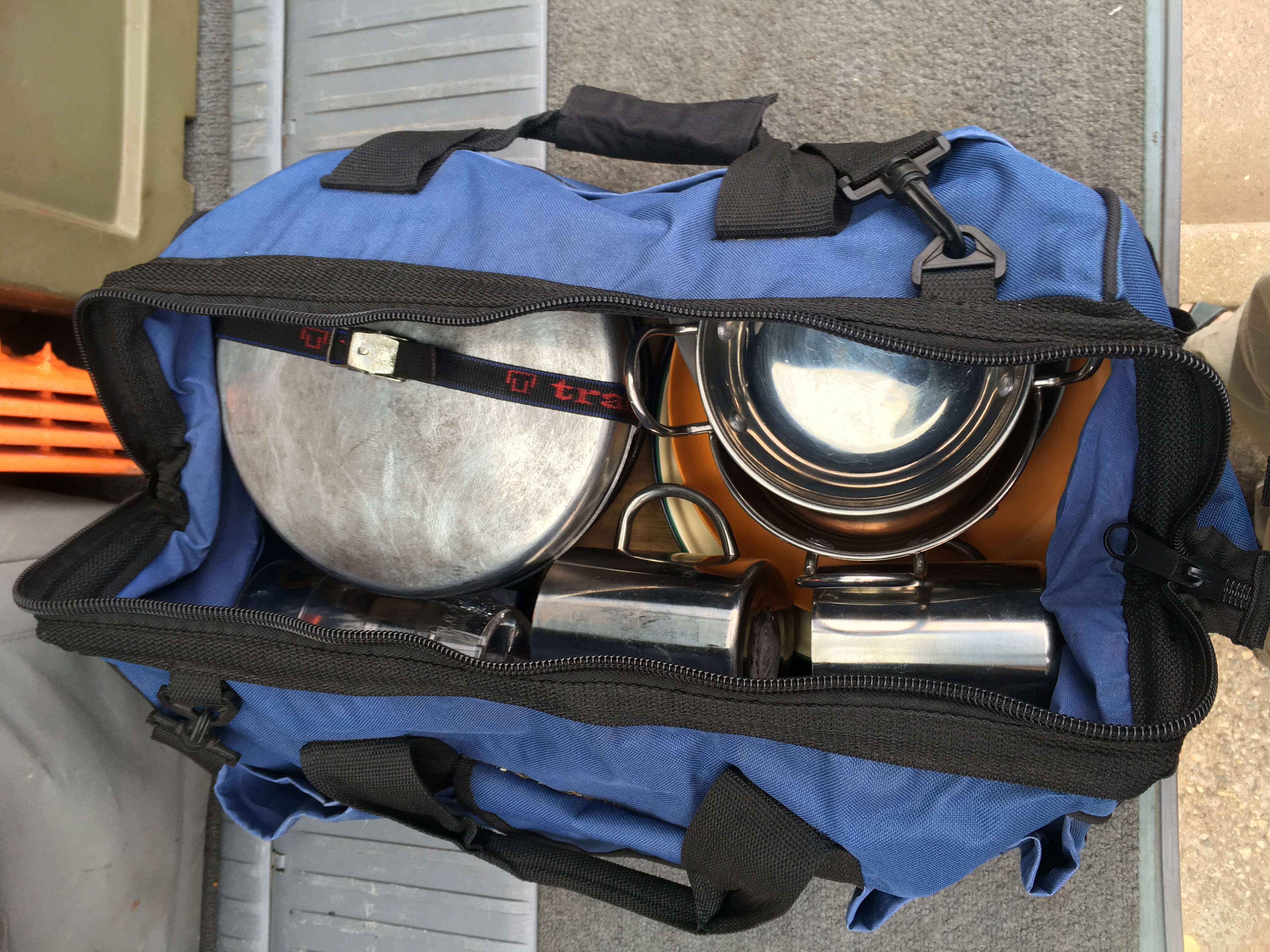 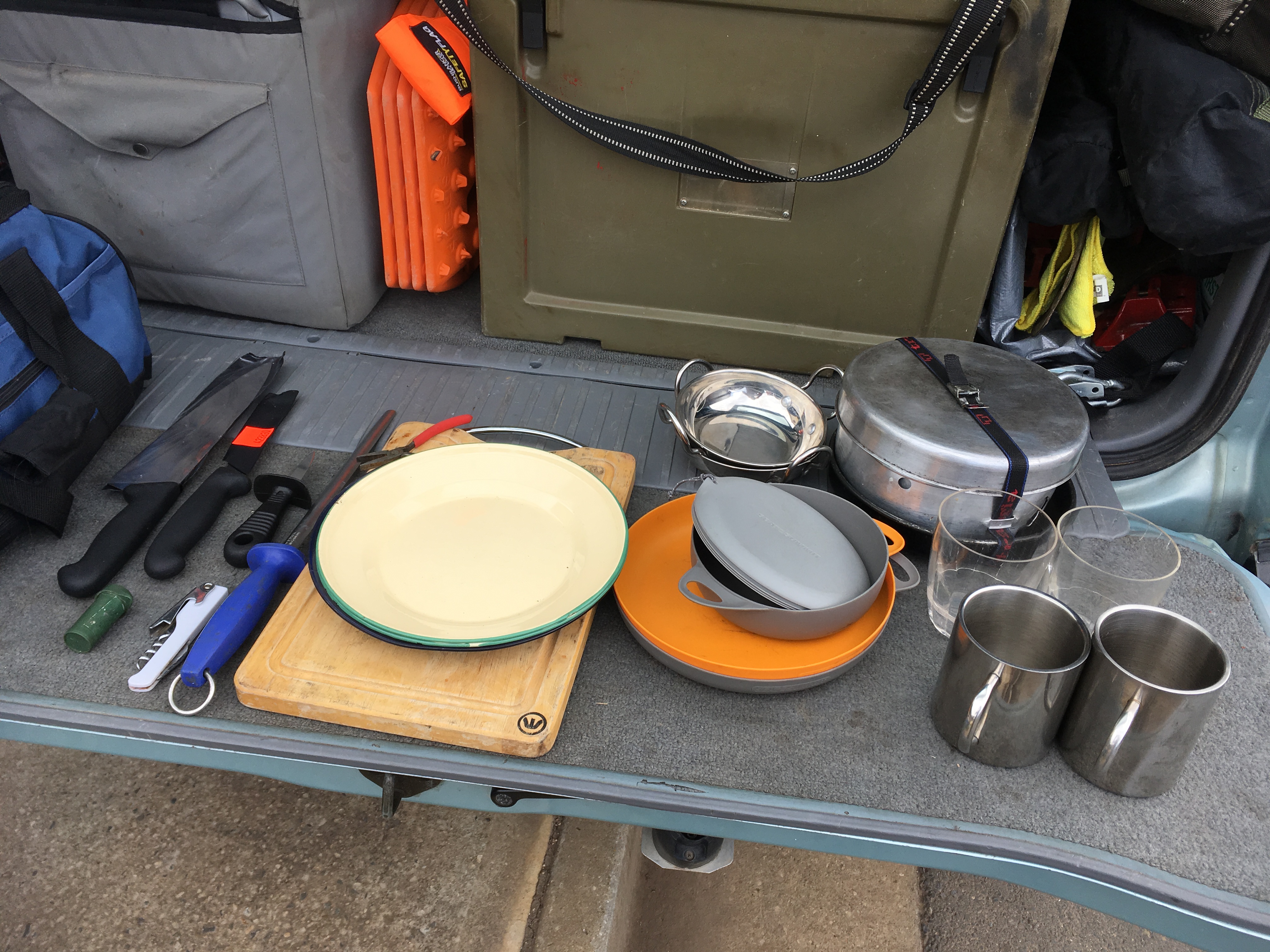 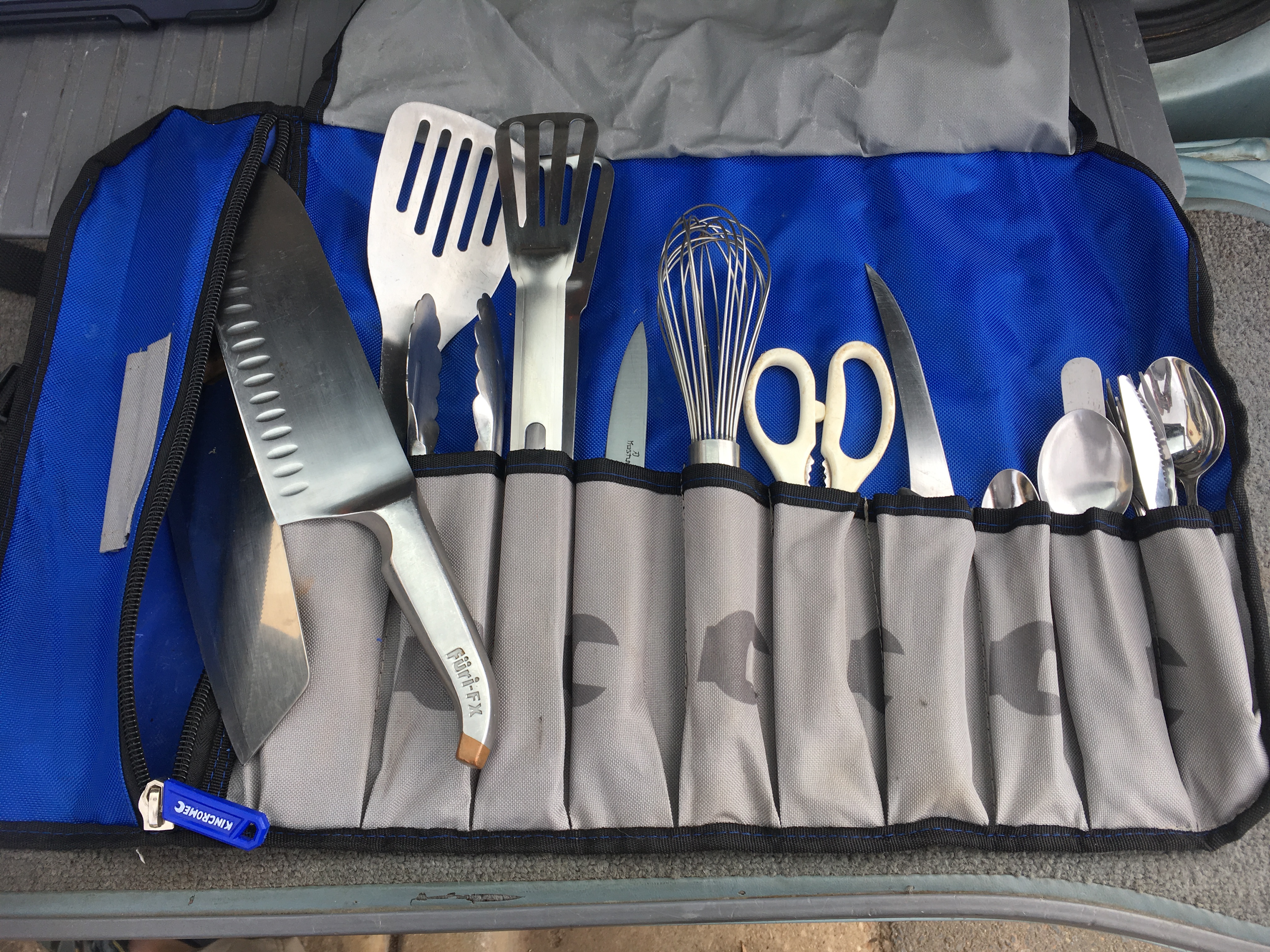 These are some new knives 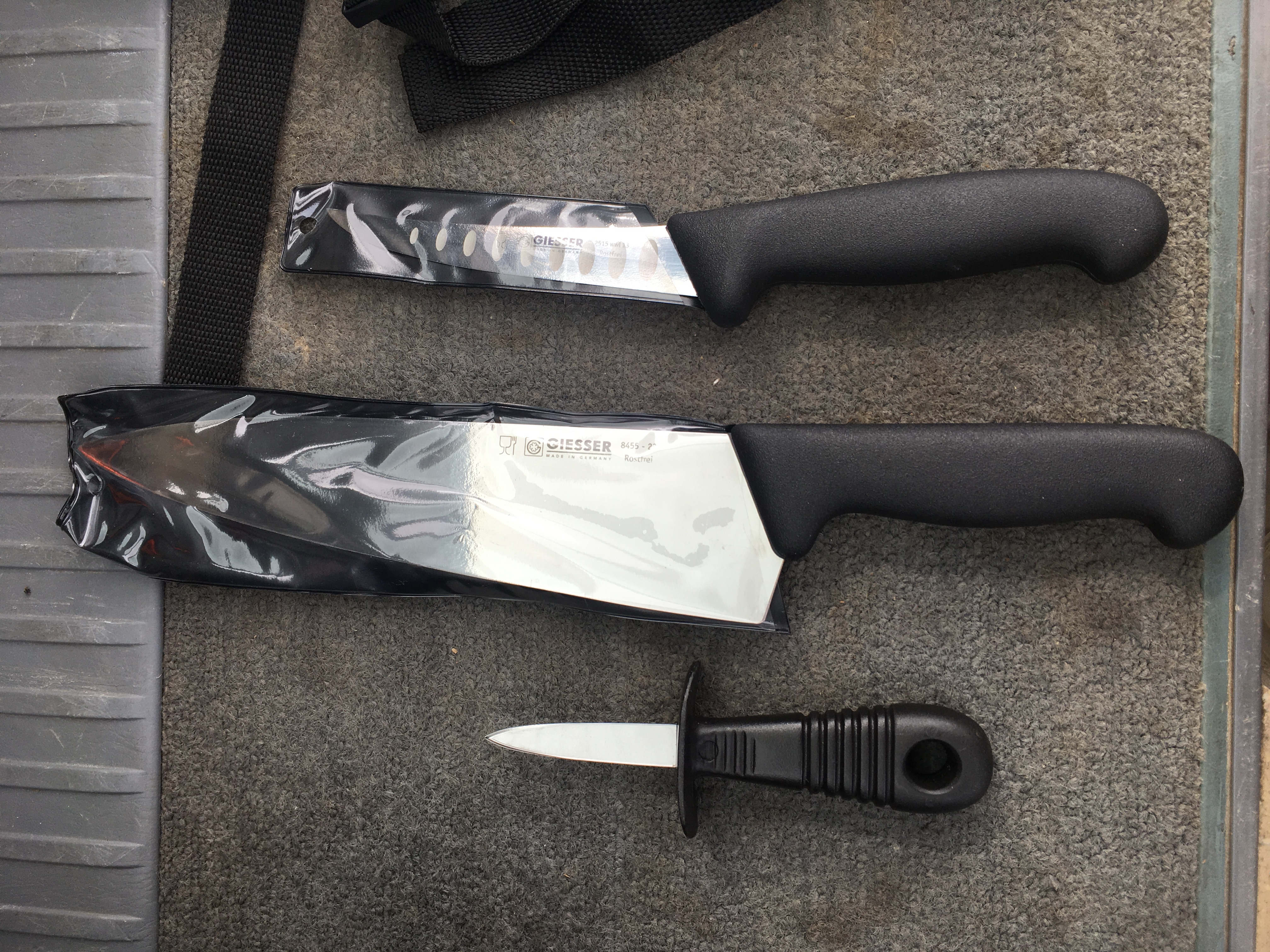 These knives are Giesser brand, and are generally found in butchery supplies wholesalers. I have a large butchers knife made by them which I really like so I thought I would give some of their other knives a go. They are not expensive but the steel seems to be really good quality, and the design basic and no-nonsense. So we’ll try the cooks knife and boning knife as part of the camp kitchen.

The small knife with the big guard is for shucking oysters. Not an everyday occurrence I admit, but last time I had to shuck oysters with a bigger knife, I shucked it straight into my hand. Alcohol may have been a factor…

After kitchen tools, the actual tools go in. I use a Bahco moulded kit with most of the usual sockets, spanners, etc. Which I really like. A Bahco screwdriver set, which I don’t like at all. Then just a general toolbox with all the other stuff in, hammer, grips, lever, hacksaw, etc. Anyway, I’ll cover tools and spare in more detail another time. 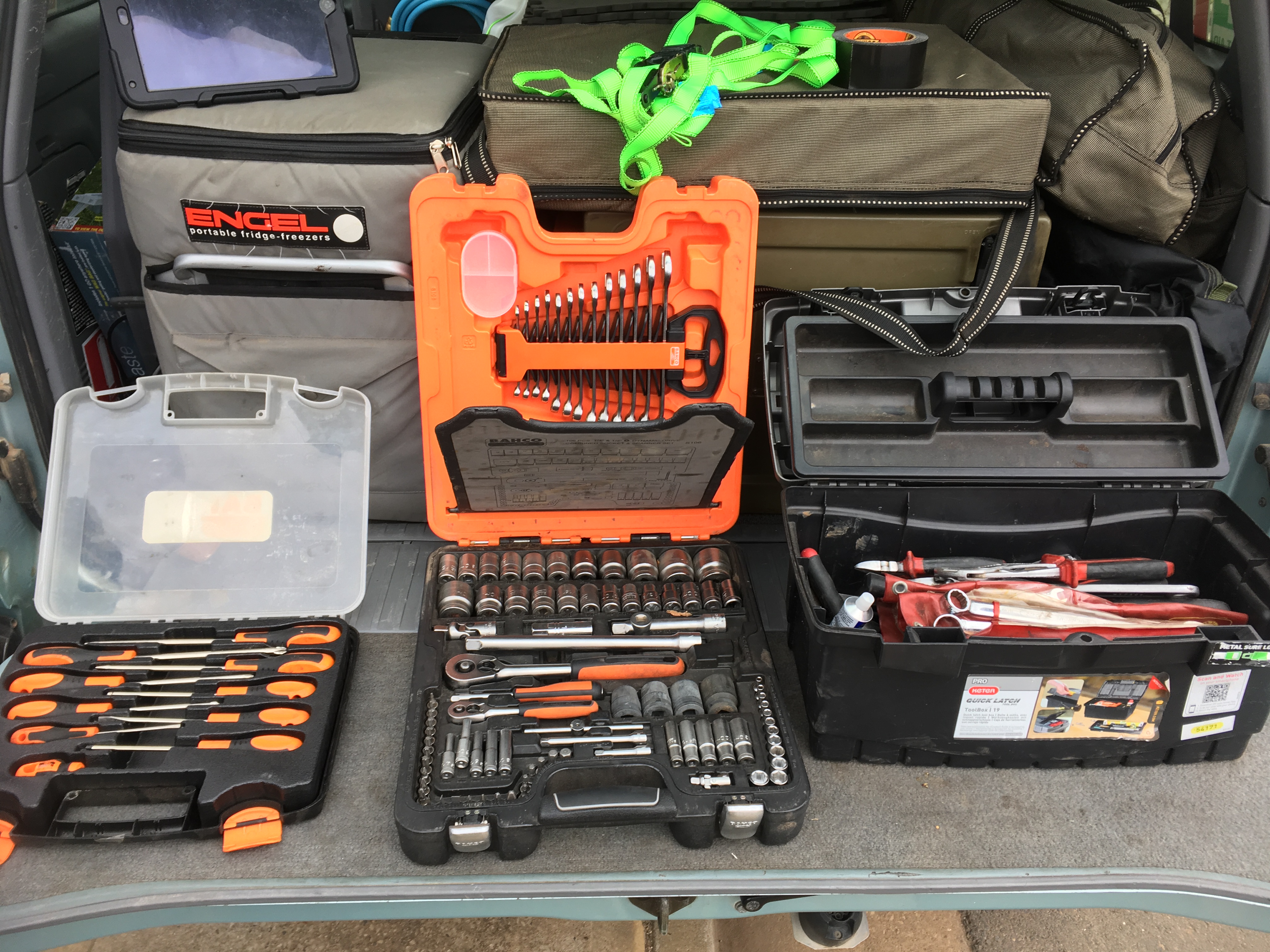 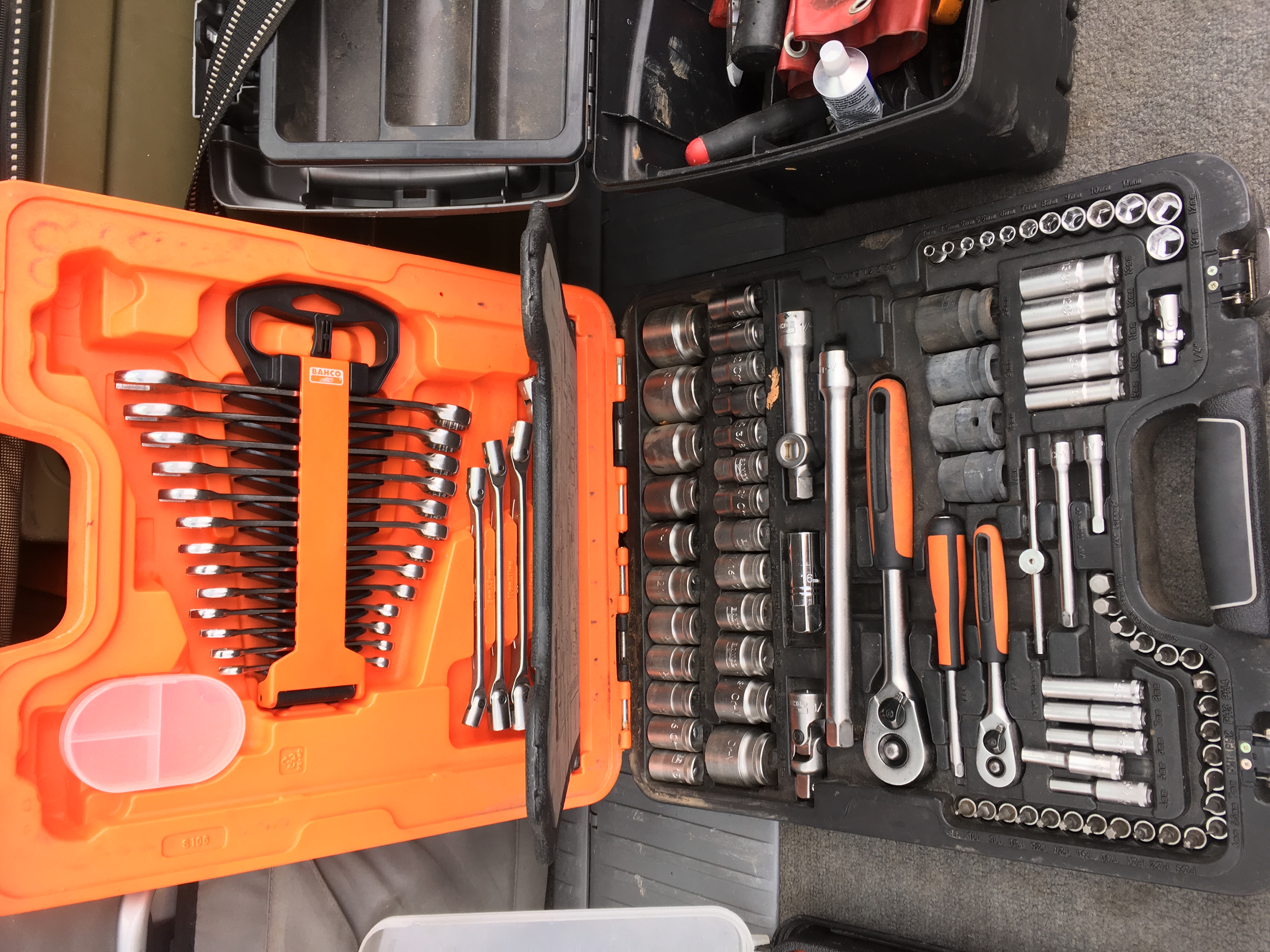 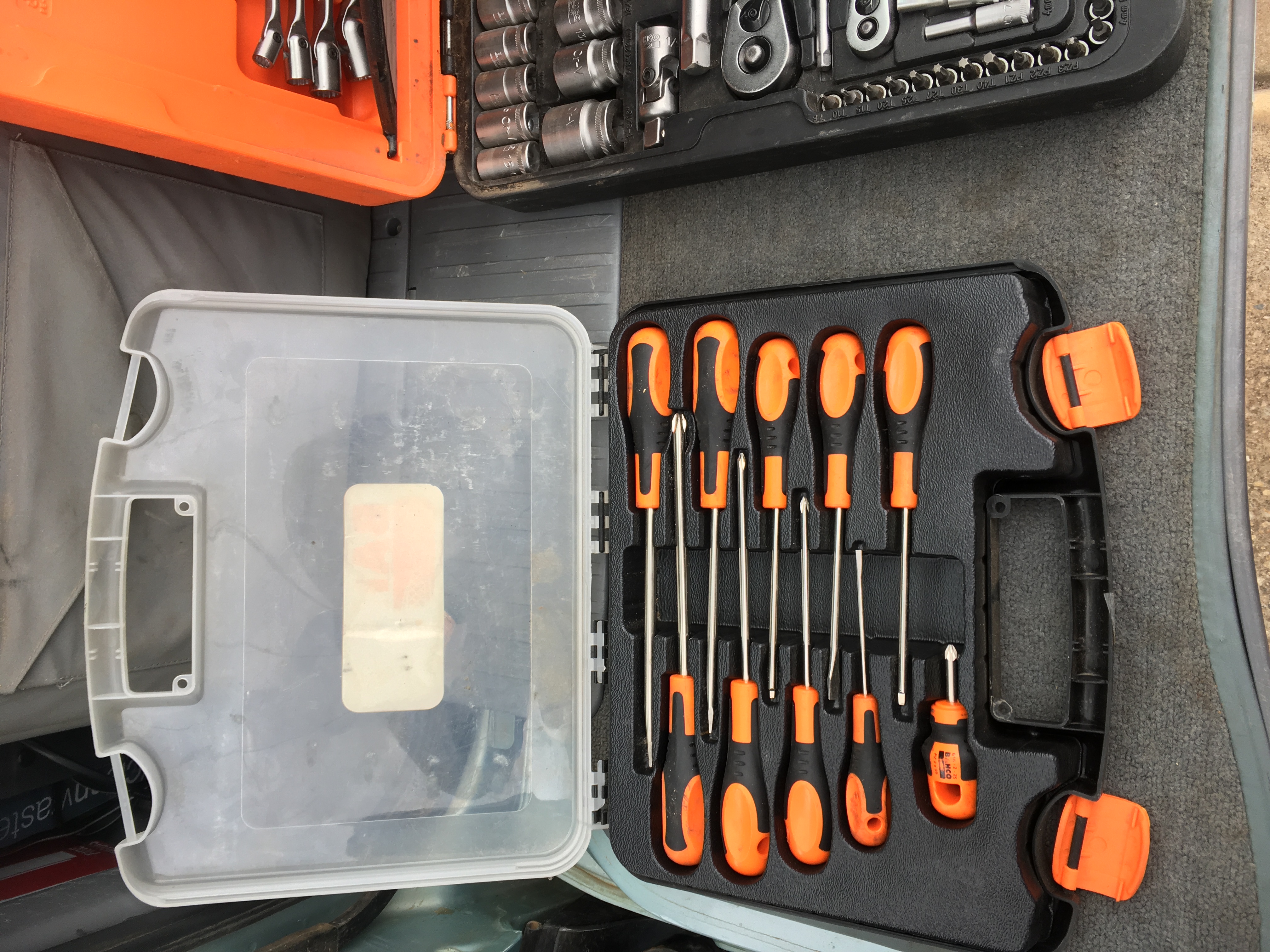 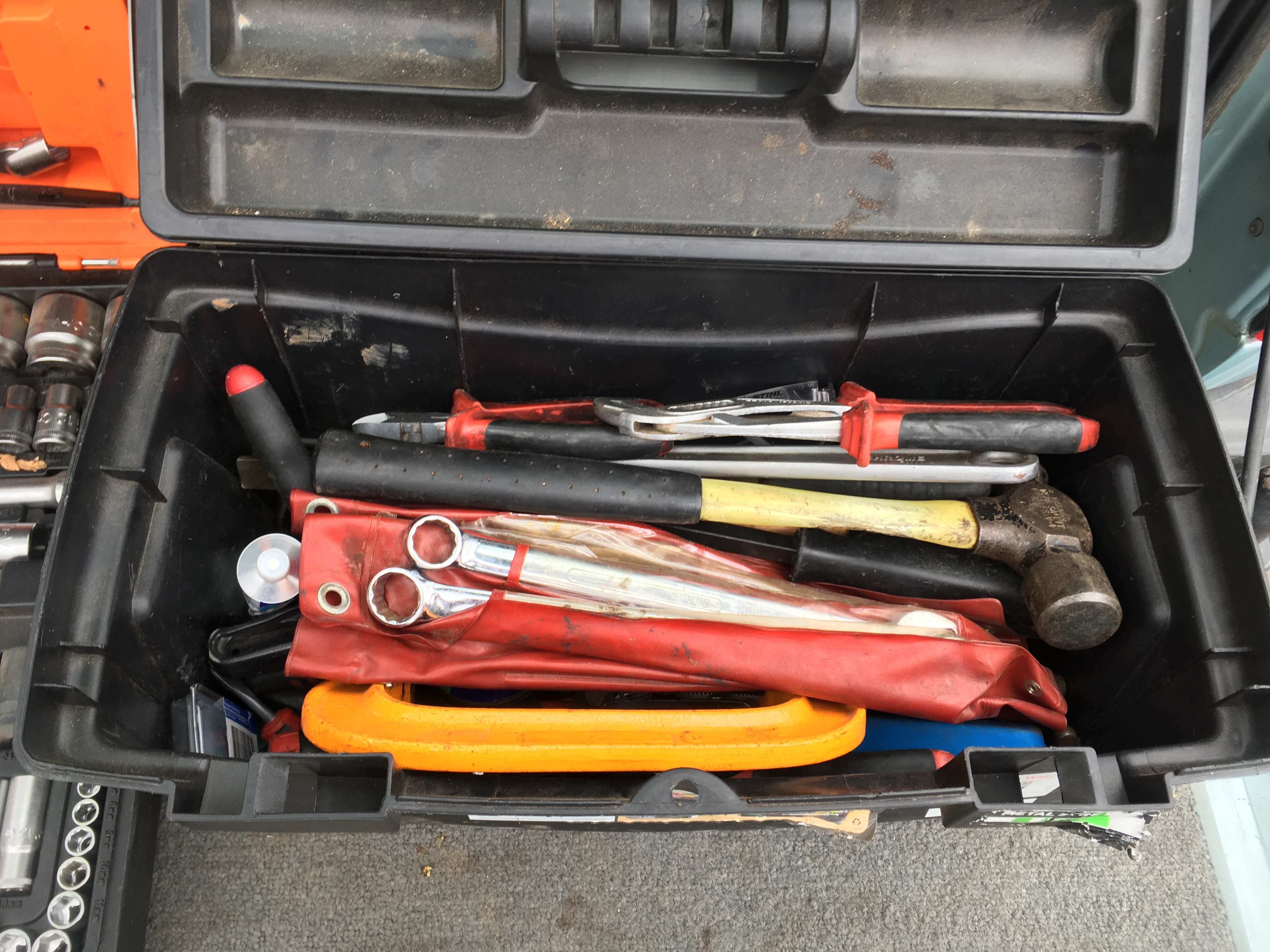 In with a couple of bags that contain the bedding. 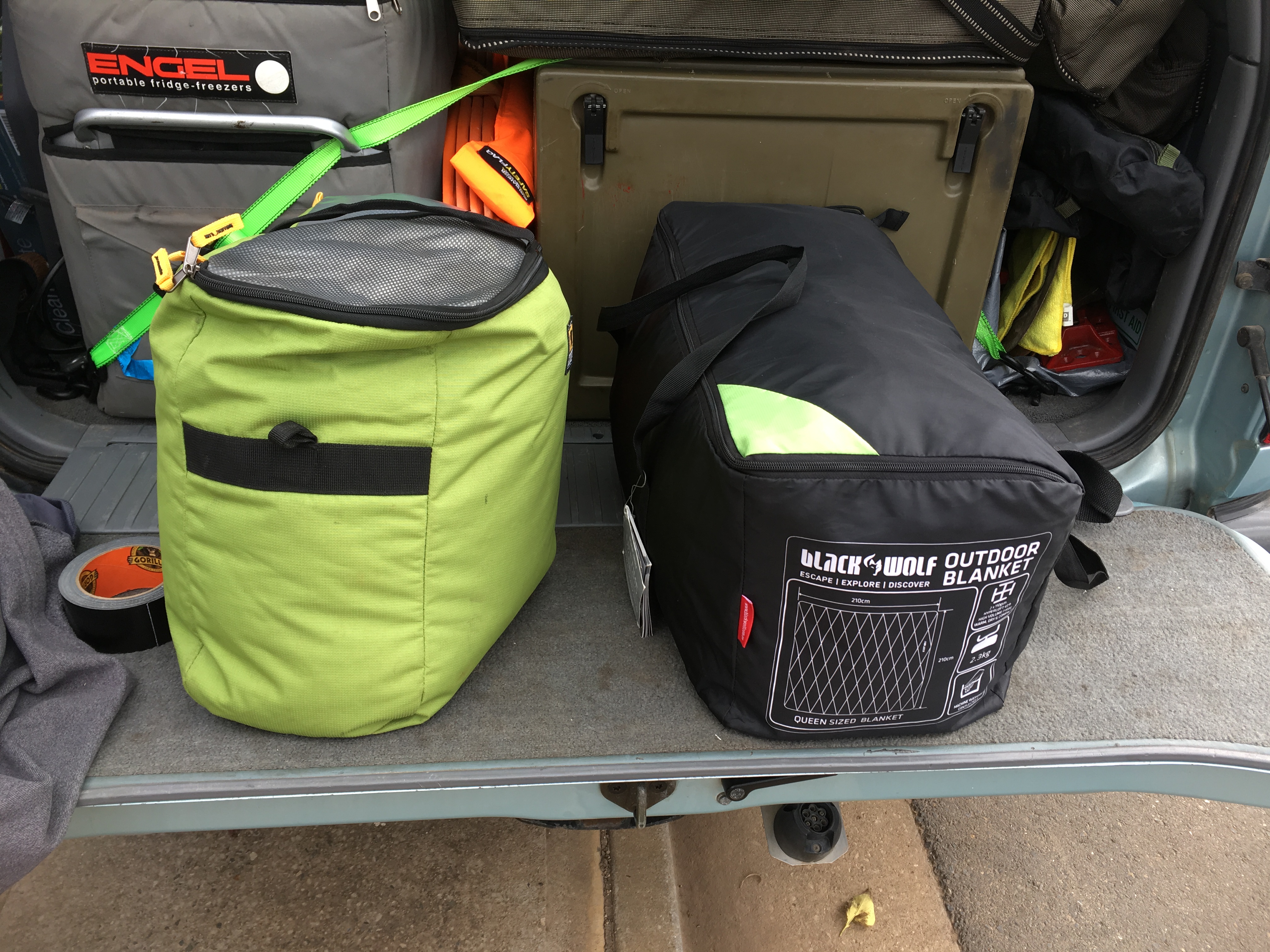 Then the OzTent sits on top.

That’s as far as it gets until we are ready to go somewhere. Then it is just a matter of adding in clothes and personal gear, food and the ExPed mattress, which I like to store not packed down.