That has been the story of my year…

We bought the Range Rover in 2006, and immediately started off road travel (as in – on the drive home, which just happened to be halfway across the country). We started buying gear, making modifications, etc. So we’ve basically been evolving our set up since then. We bought the Land Cruiser in 2013, so it’s coming up on being five years of tinkering with that beast. You wouldn’t think there would be much left to do, right?

Well, we’ve kind of known, or at least hoped, we would be able to do a trip like this for the last three years. So lots of things during that time have kind of been with this in mind. I tried to keep the truck loaded with our ‘long term’ set up, even if we were just away for the weekend. To see what worked and what didn’t, what lessons could be learned. If you had asked me at the start of that process how many changes I was expecting to make I probably would have said “Not many” after all, we had done plenty of trips by then, and already gone down a couple of blind alleys with gear (and trucks!), so I thought what we had was pretty much as sorted as it was going to get.

Well, guess what? Yep, all those little notes on your phone, watching videos, and hanging out with like-minded others on the internet, well it all makes a difference. Trying to imagine situations and environments you are yet to face, but are likely. Small details, ideas, or ways of looking at things that you just might never have thought of on your own.

So what’s been done?

I did a heap of work to the Cruiser before our two and a half week trip last year. Most of which will carry onto this trip (the Cruiser barely does any miles outside of touring). However, there has still been some major jobs to do.

Toyota recommends you service the wheel bearings every 20,000km on the Land Cruiser. General opinion seems to be unless you are giving it very heavy use then this is excessive and 40,000km is more realistic. Anyway, this was coming up due. I had done this job before, but had never serviced the swivel hubs on the front axle that sit behind the wheel bearings, so I thought it was time to give those a birthday too, and while I was at it, I may as well throw a couple of lockers in the centres…

Of course it wasn’t quite that simple. Lockers are a serious expense, I originally liked the idea of some non-switchable types, such as a Detroit Locker in the rear and a torsion type Truetrac up front. This was advised against by people who know, not as a concept, just in this vehicle and this application.

In the end ALL the options have pros and cons, as explained here:

So I ended up with Harrop/Eaton E-Lockers front and rear, yes there is an amount of unlocked between forward and reverse gears. However, I’m building a tourer, not a rock crawler. I really didn’t want to put a whole new system on the truck in terms of air operated actuation. So simplicity and reliability won out over ultimate technical ability.

Why lockers anyway? Good question. This truck has gone pretty much everywhere I’ve pointed it. Do the few times it hasn’t made it really warrant the expense? For weekend trips, especially with others, no. However this is more about being fully loaded, and solo vehicle. Being able to ‘walk’ technical sections, rather than use momentum whilst carrying close to GVM is important. Much less chance of breakages or accidents. Plus, as I was having the axles fully apart it was now or never.

It was good to see that everything was still in good condition on disassembly. The wheel bearings would go till the next service. I changed the swivel bearings and replaced all the seals with genuine. My man Ashley assembled the diff centres with the lockers, then it was just a matter of re-assembly and wiring in the electronics. 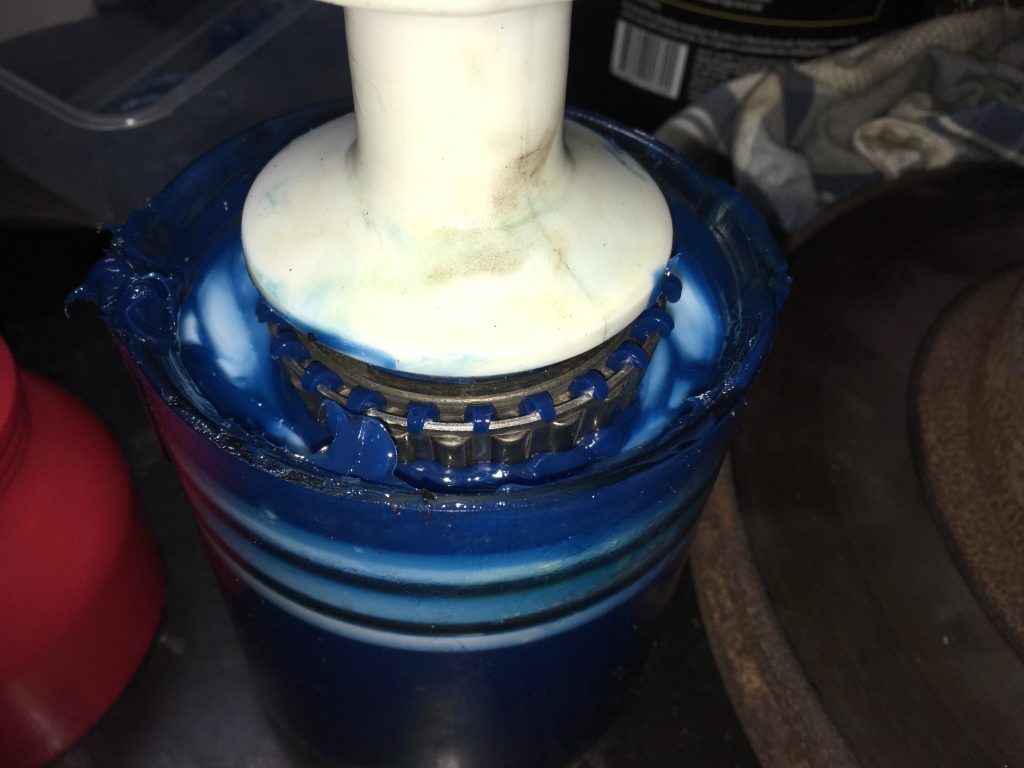 So that was the big job. Others included sorting the hand brake properly with a new cable and several re-adjusting to get it spot on. My handbrake is really good now. Despite all the complaining about Cruiser hand brakes, with a new cable and proper adjustment (which I re-did when the axles where apart), mine is three clicks. 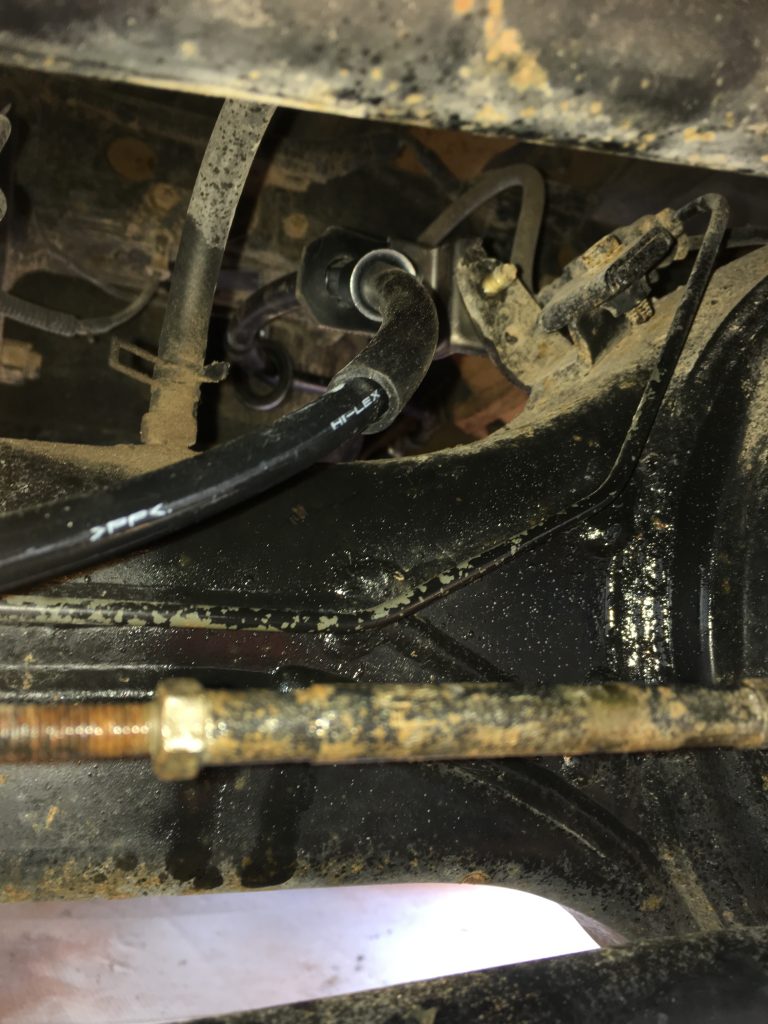 Snorkel – another mod that was for what we are likely to encounter rather than what we need right now. I went with the Safari V-Spec as it’s just a proven product and designed to work as a ‘snorkel’ rather than a ‘raised air intake’ as the genuine Toyota versions are – meaning they are not sealed against water ingress. Whereas the Safari is, and give you the option to take extra measures to seal it up during installation. 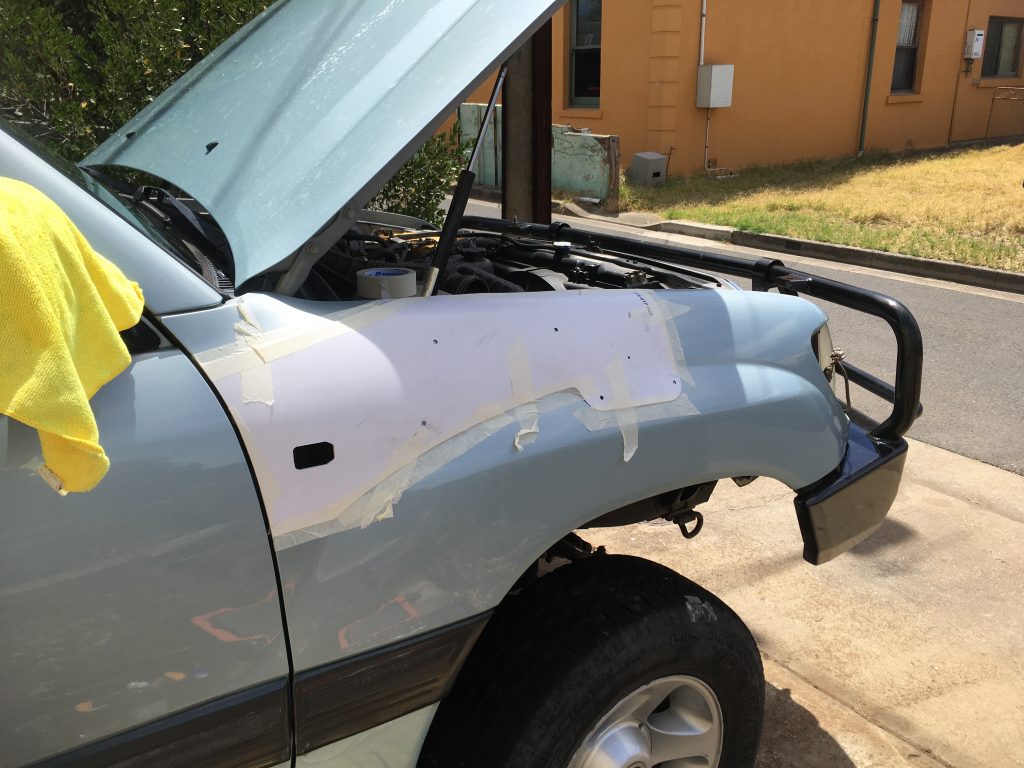 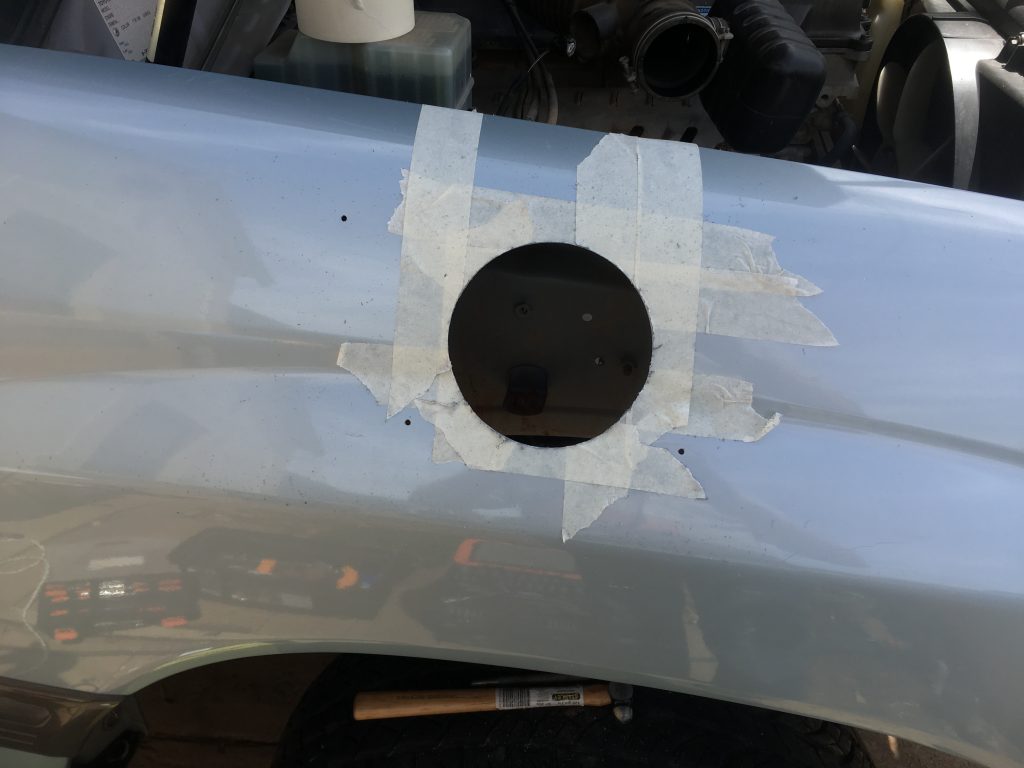 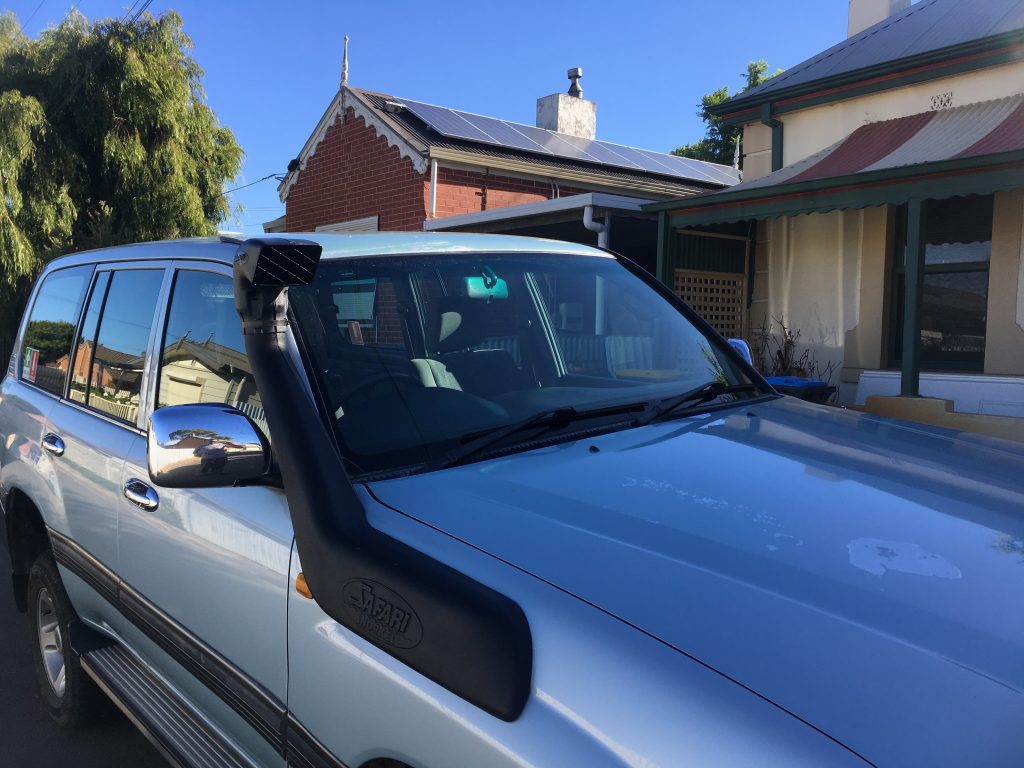 Now it is just a matter of more normal checking and service items on a seventeen year old truck, plus there are a few small mods still to do. So I’ll probably do another of these posts once they are done.

There was nothing wrong with our camping set up (most of it hasn’t changed), however, when you start to think about that being your main ‘home’ instead of things that keep you comfortable till you get back home, you look at it a little differently.

Bed – this was a fundamental change. As our original camping set up evolved from my back-packing gear, we just used sleeping bags and thermarest pads. These are fine, but advancements in portable mattress technology, plus a friend suggesting that have a ‘bed’ was by far the most comfortable option, meant we ditched the old set up and went this way. 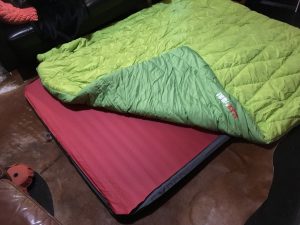 Exped Megamat Duo, Black Wolf Outdoor Blanket, then just a fleecy sheet and a mattress cover, more to keep the other stuff clean than anything else. Cheap things that can protect the expensive things, or at least that is the plan. We might need another layer for colder climates, I’m tempted to take a sleeping bag just in case. Naomi feels the cold much more than I do. As you can see, it’s still a work in progress!

Pillows – some friends sent us some Nemo inflatable pillows from there US. We need to try them out with the rest of the set up, but these will be the preferred option. Unfortunately we haven’t really done any camping this year, just saving money and prepping. We should try to do at least a weekender before we go.

Cooking – we’ll still base most of our day to day cooking around our Trangia. I’m so familiar with it now that I can use it pretty much as easily as a gas burner. However, I’ve been trying to practice with the camp oven. Just to be able to have some variety from ‘stovetop’ meals, and you see some pretty good food come out of them. So it is a skill I am keen to improve. however, there have been some mixed results along the way…

I was pondering going to a spun metal type camp oven, like Jase from All 4 Adventure uses. Might still go down that route, but sometimes you just have to say “this is what I have now, so this is what we will use for now” rather than just keep buying new gear, as of course, we live in the real world.

We’ve also changed how we store the cooking gear. We used to use a wicker picnic basket, but now we use ‘tradies’ tool bag and tool roll. Better dirt sealing and packs easier. 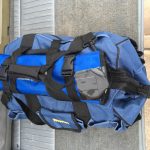 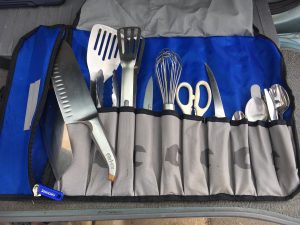 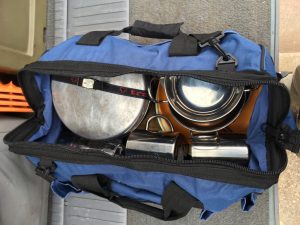 Shower – We also had a Nemo shower shipped from the US. That was the one thing I felt we could have done for the longer stops on our ‘Best Western’ trip. Plus I don’t want to be staying at a caravan park every time we feel we need a shower – I was going to cut our water storage from 100L to 80L, but I think the shower will probably put it back to 100L – shout out to Dirt Sunrise for sourcing the unobtanium for us! 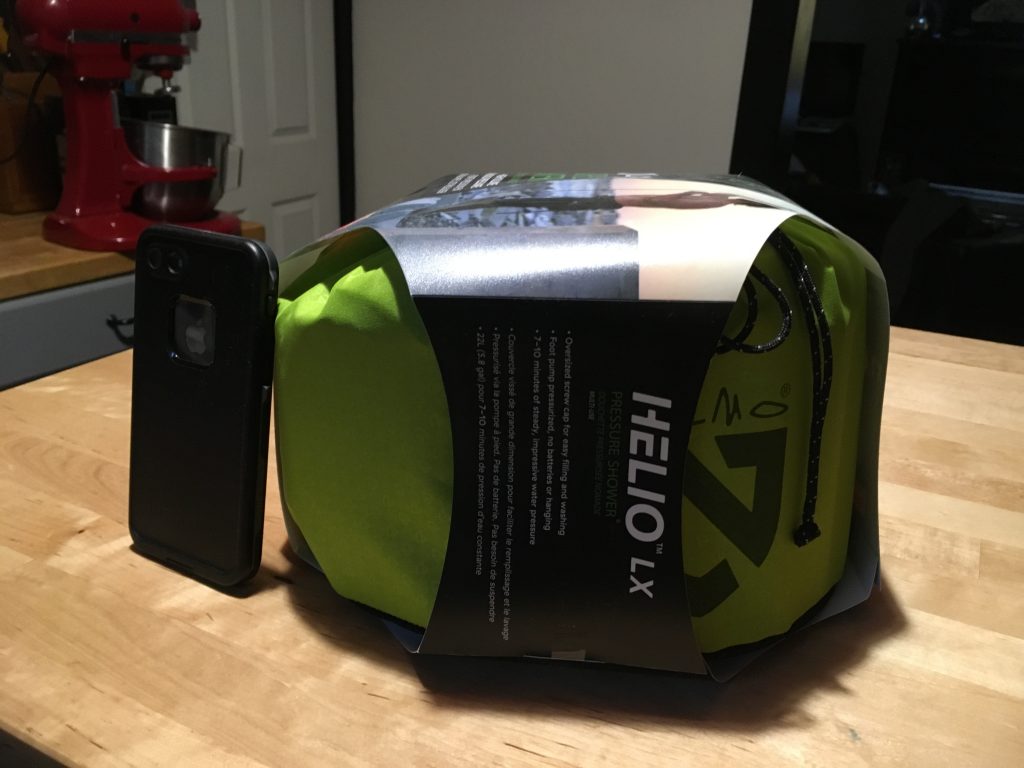 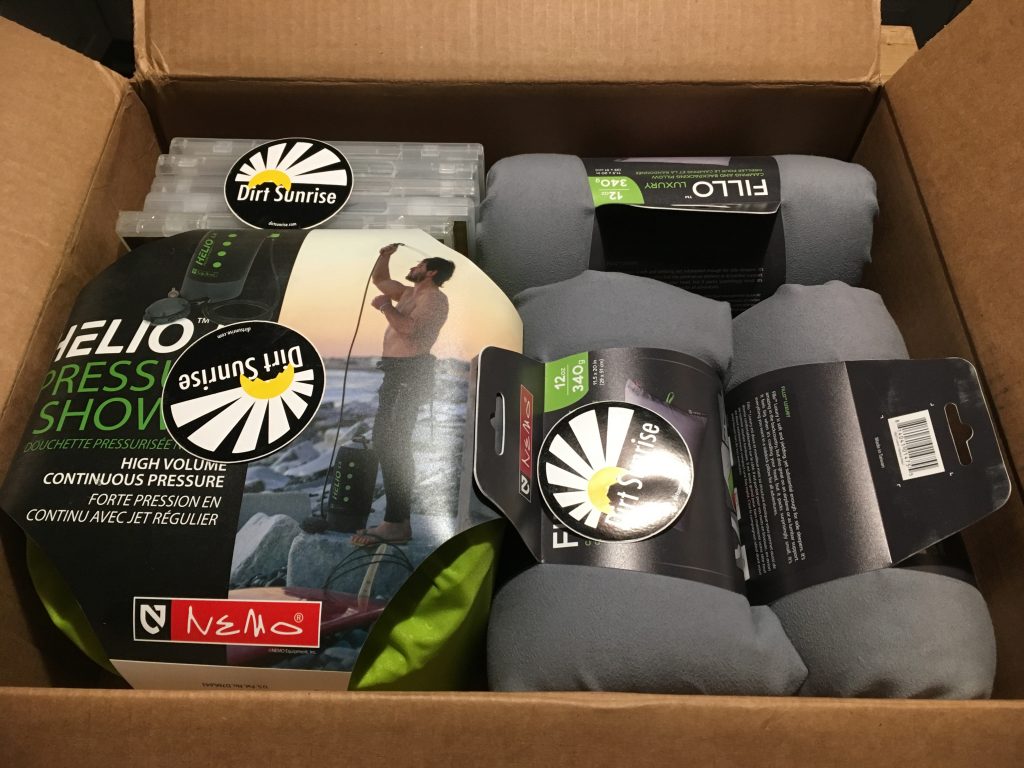 Toilet – we got this flash camping toilet. I’m not sure we’ll even use it, however I think it might be regulatory to carry one in some states. Anyway, those who have used it give good reviews and it’s minimal weight and size penalty.

Roof net – This made by Boab, and just uses the grab handle bolts to suspend it inside the car. Allowing pillows, bedding, jackets, etc, to be stored up there. Freeing up some space below but also keeping that stuff away from dirty recovery gear, camp ovens, etc. 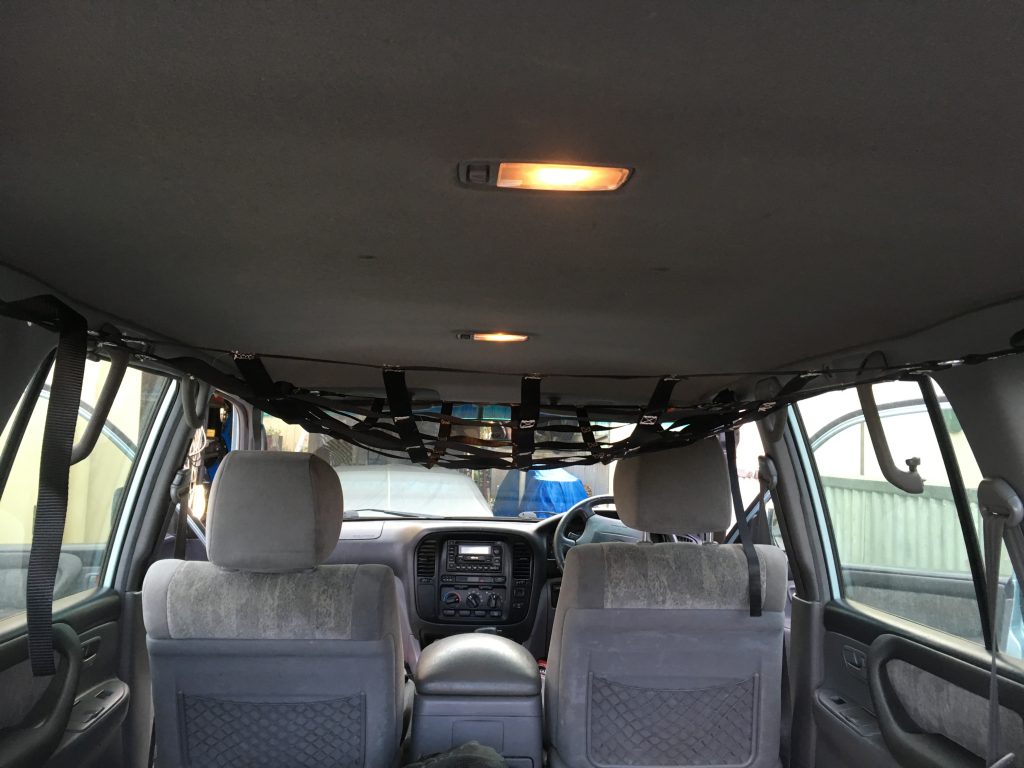 Solar – it was time for this. To enable longer ‘off-grid’ camping. My knowledge of most things electronic is limited, plus by this stage I was pretty much over researching stuff so I just put my faith in Home of 12 Volt. We have been using their ‘Thumper’ portable power supply reliably and simply for over ten years. I’ve always liked the no nonsense customer service at their Mount Barker shop. So we will use their 120W multi-crystalline split fold panel. With limited edition green bag (the bags are normally grey, apparently there were four green ones made that no one wants, so now there are three…). 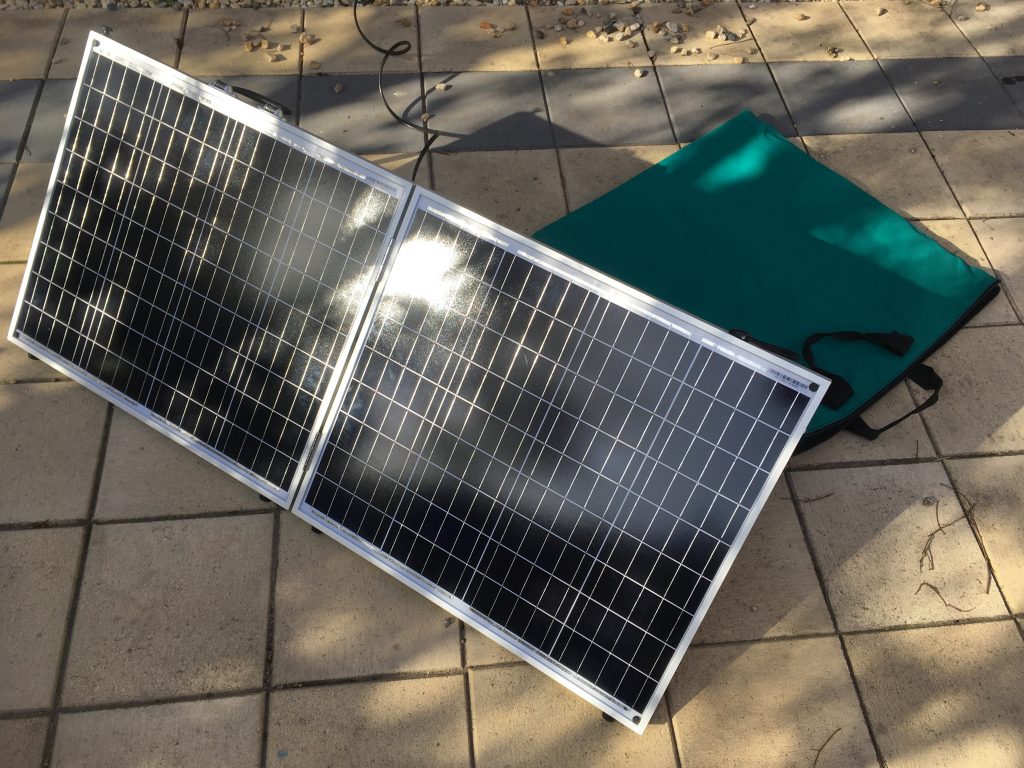 I’ve conducted a little experiment over the last couple of days, running the fridge off the Thumper and charging the Thumper with the solar. Even though it was completely overcast the solar has done fine with keeping the Thumper topped up with juice, mind you it is only about 15 deg C as it is winter here. You really notice how much more power the fridge draws when it is left open. The regulators for the solar react pretty quickly though and charge it back up.