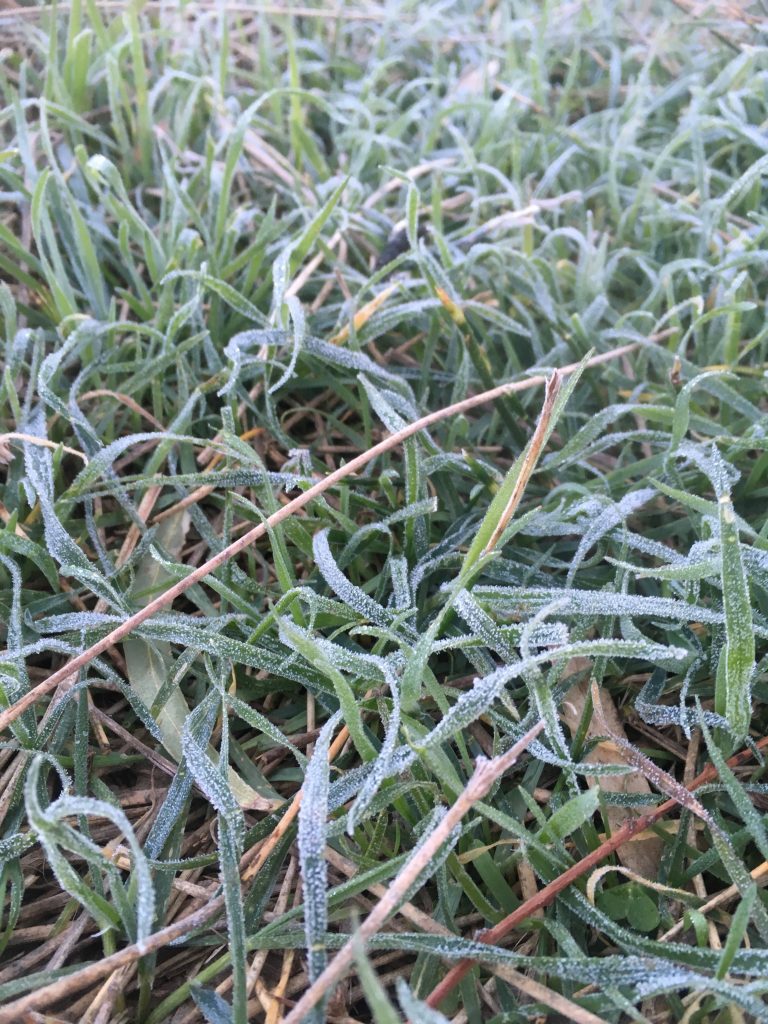 Actual frost on the ground greeted us the next morning, frost! Australia, this is not what I signed up for…
May as well put the camera to work then… 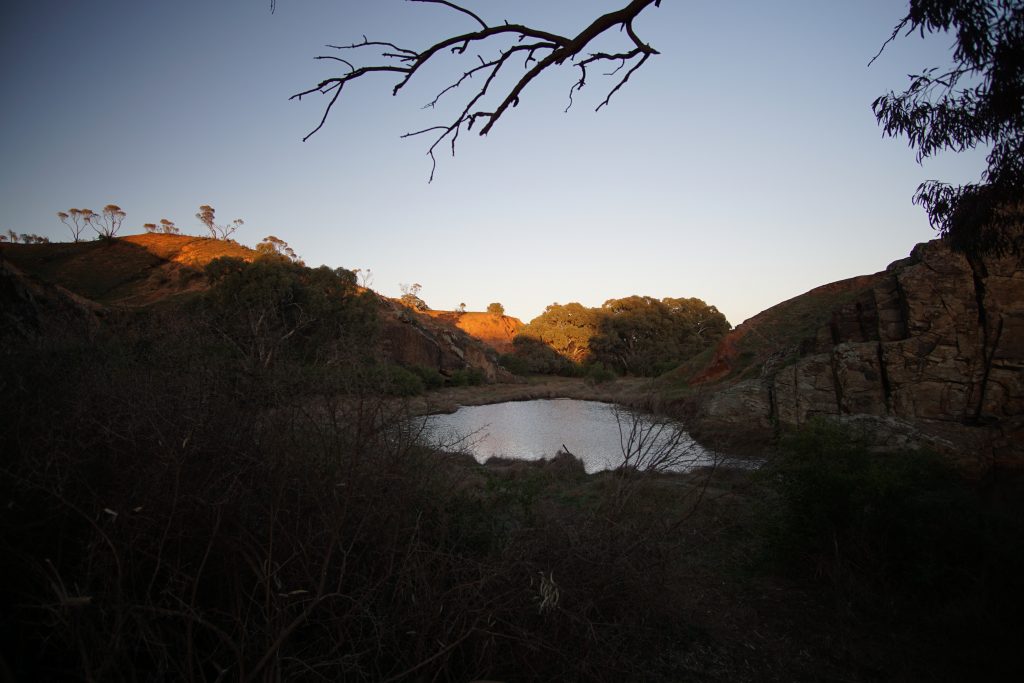 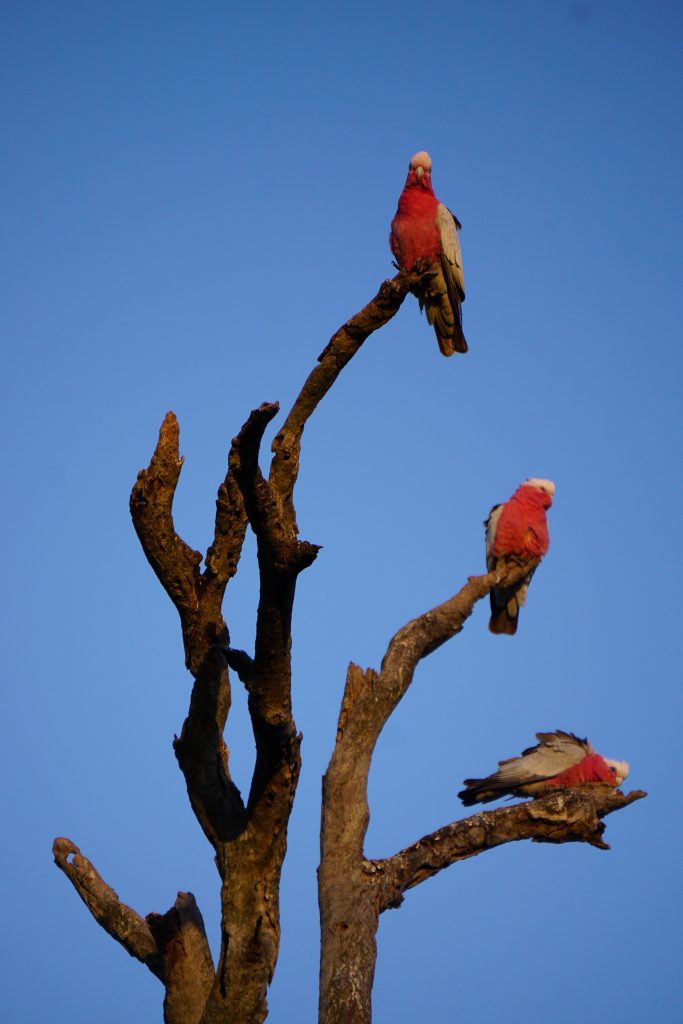 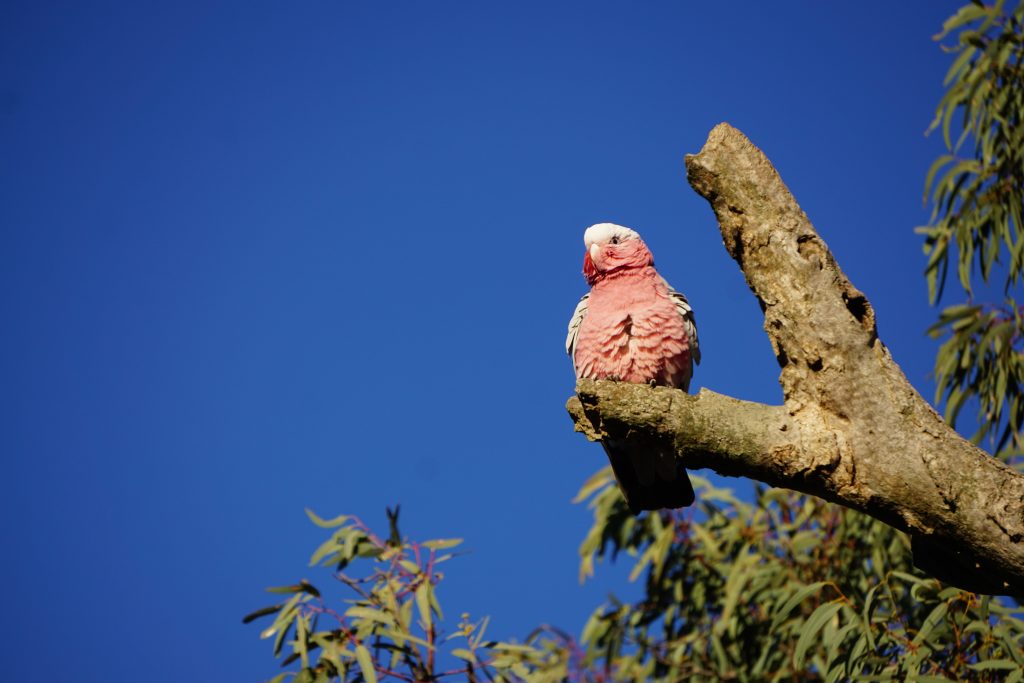 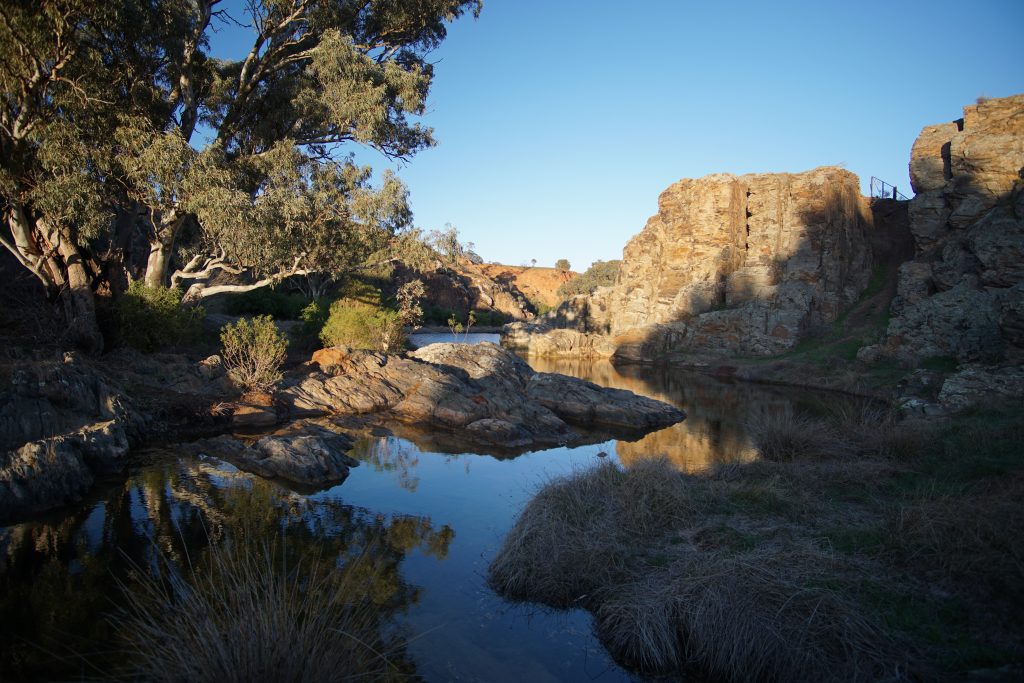 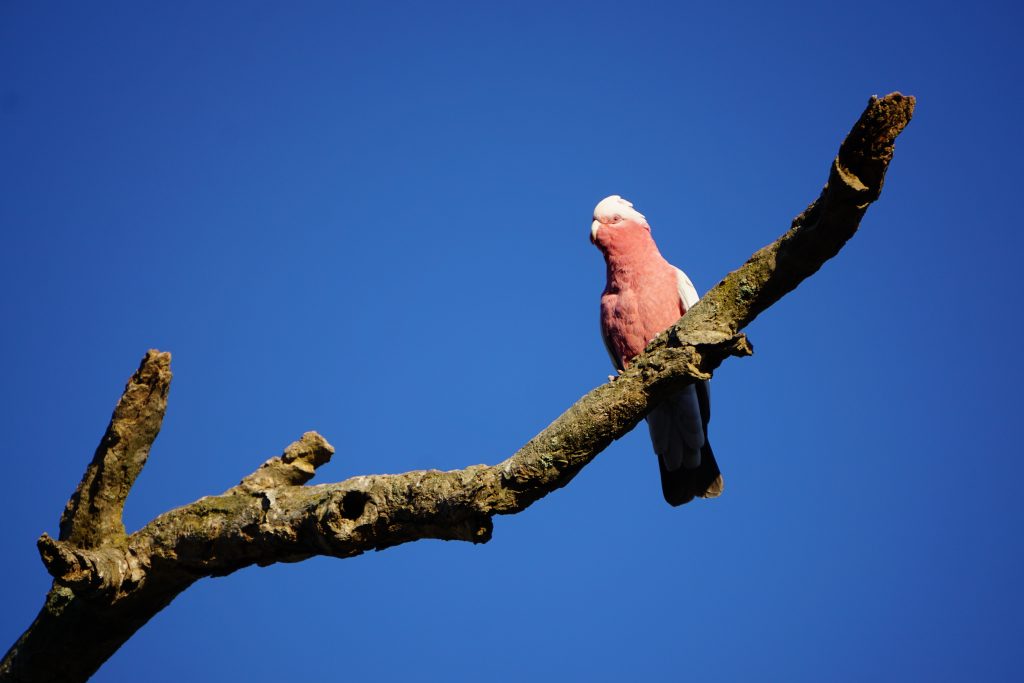 Feeling like we were pretty rusty campers (which as it has been a full year since we did this is, it is only to be expected really) we eventually got packed up and got going. Of course I took the road less traveled, up through lonely, empty arid country. It reminded me of the film No Country For Old Men, a good watch if you like that sort of thing. 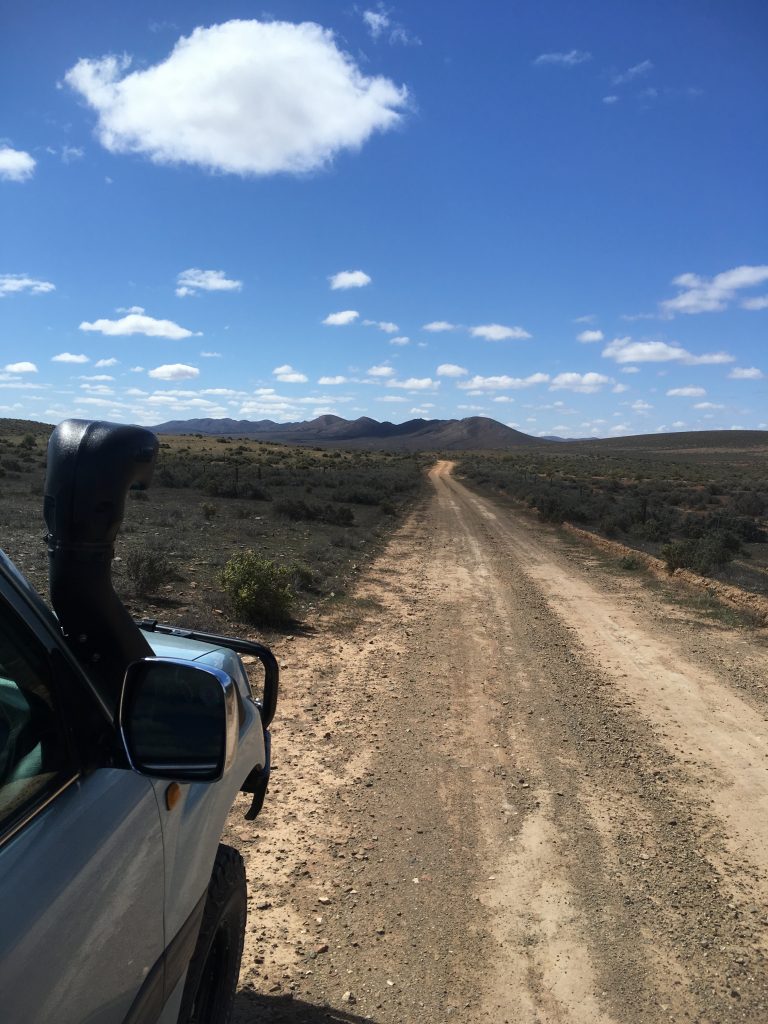 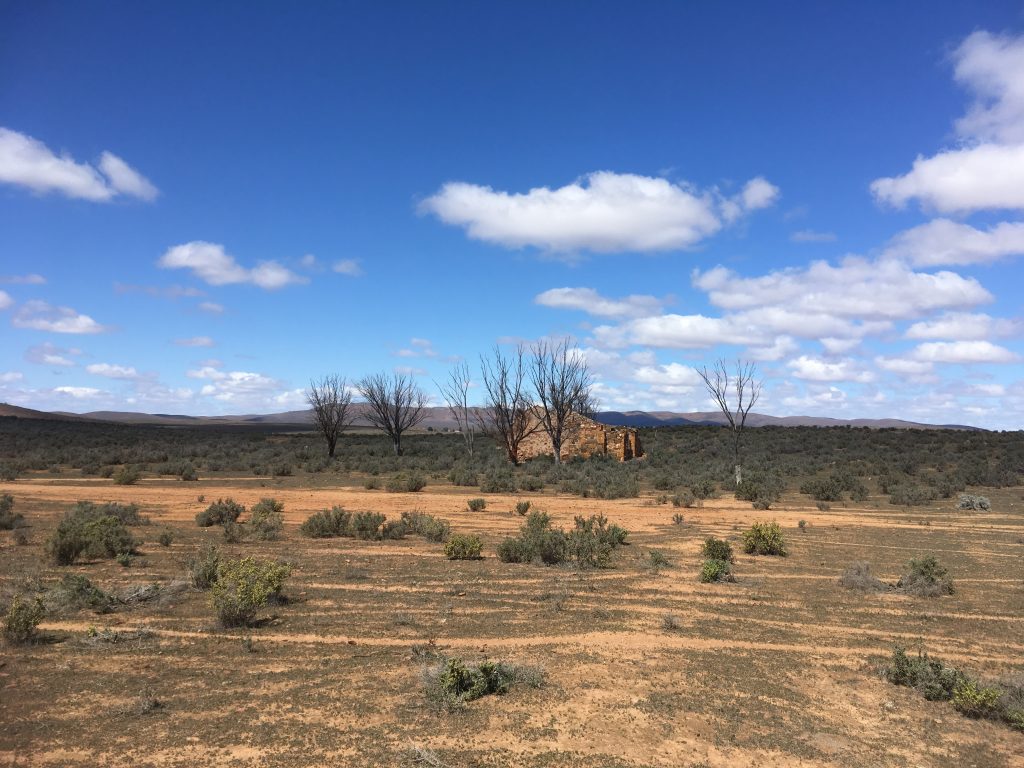 Eventually after feeling like we had opened and closed about a hundred farm gates, we hit the bitumen highway and barrelled the last few km into the town of Hawker, the gateway to the middle part of the Flinders Ranges, many, many times have I stopped at this town. From here we took the scenic Moralana drive. A couple of snaps from that. 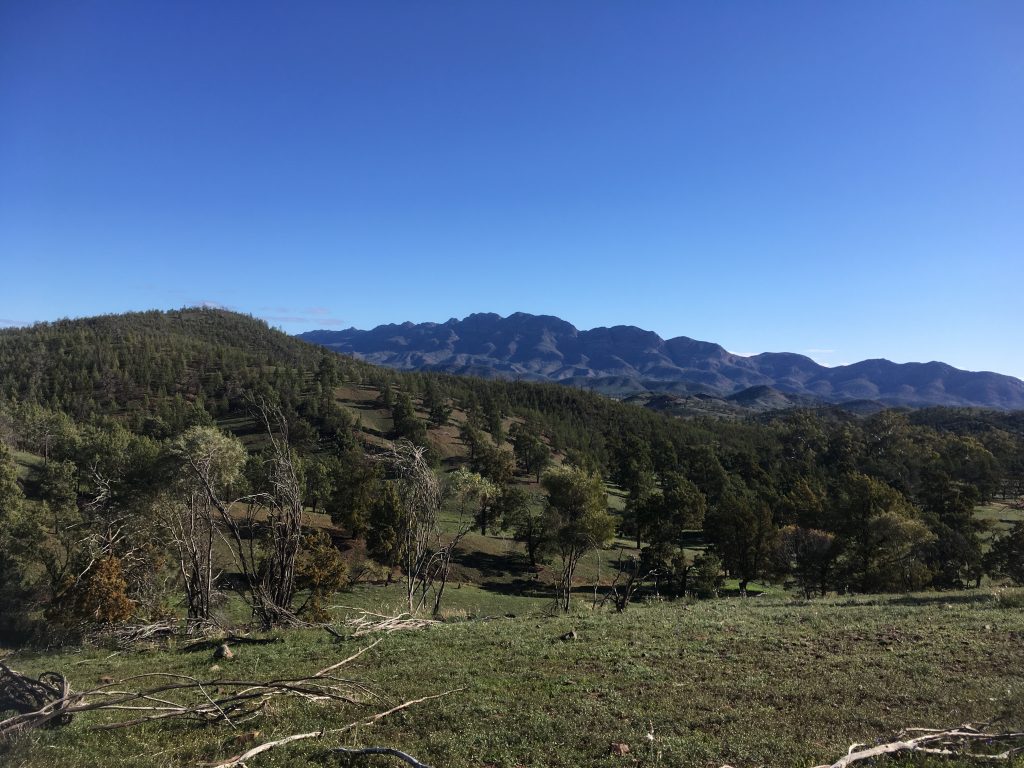 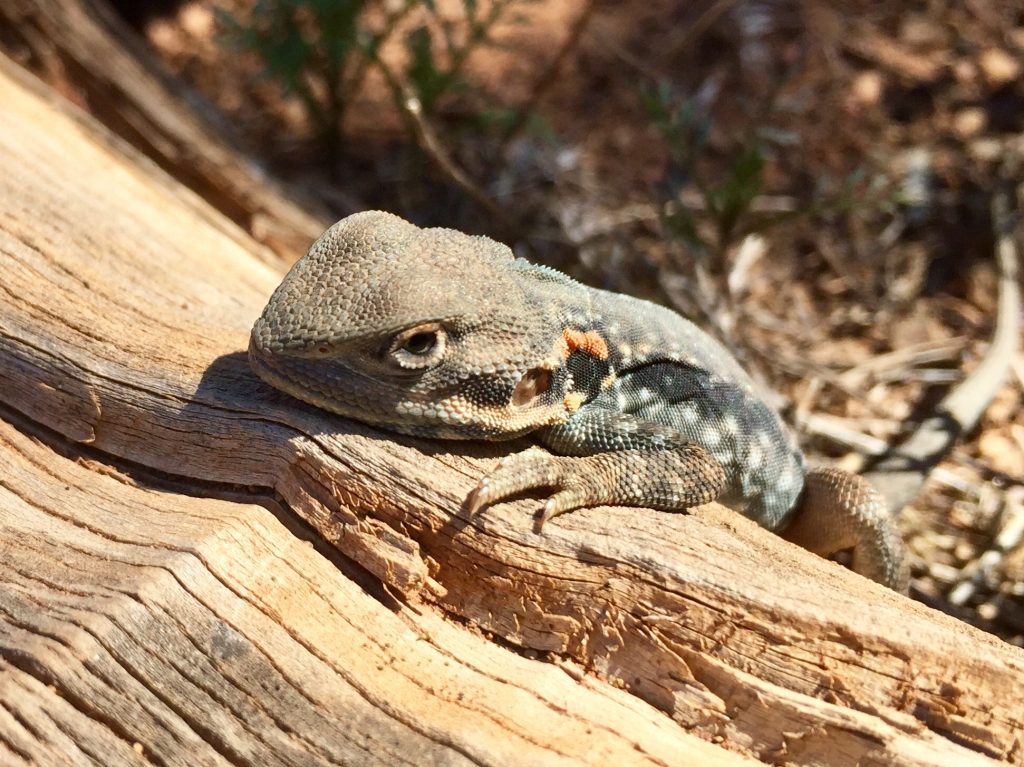 After not seeing any other 4×4 tourers until now, we could now see this was peak touring season for this part of the world. Spring, still cold enough at night, but warm and sunny with clear skies during the day.
The plan was to now head up the highway to Parachilna, then head due east on the road to Blinman. I had camped along this road before, when doing the Public Access Routes in the area, back in 2014.
https://overland.kinja.com/akraroola-an-ancient-wilderness-1723047430
https://overland.kinja.com/arkaroola-an-ancient-wilderness-1723062290
That night I was the only camper on the road and I wouldn’t see another 4×4 till I was virtually at Arkaroola late the next day. Back in the present, there were probably 30 campers along the road this time, some caravans looked like they were planning to be there a while (satellite dish (?) all set up and everything). So right then we knew it would just be a quick and dirty one-nighter for us, this isn’t our bag.
OzTent set up in minimal mode, dinner cooked off the tailgate, meant we were up and gone quickly the next morning. 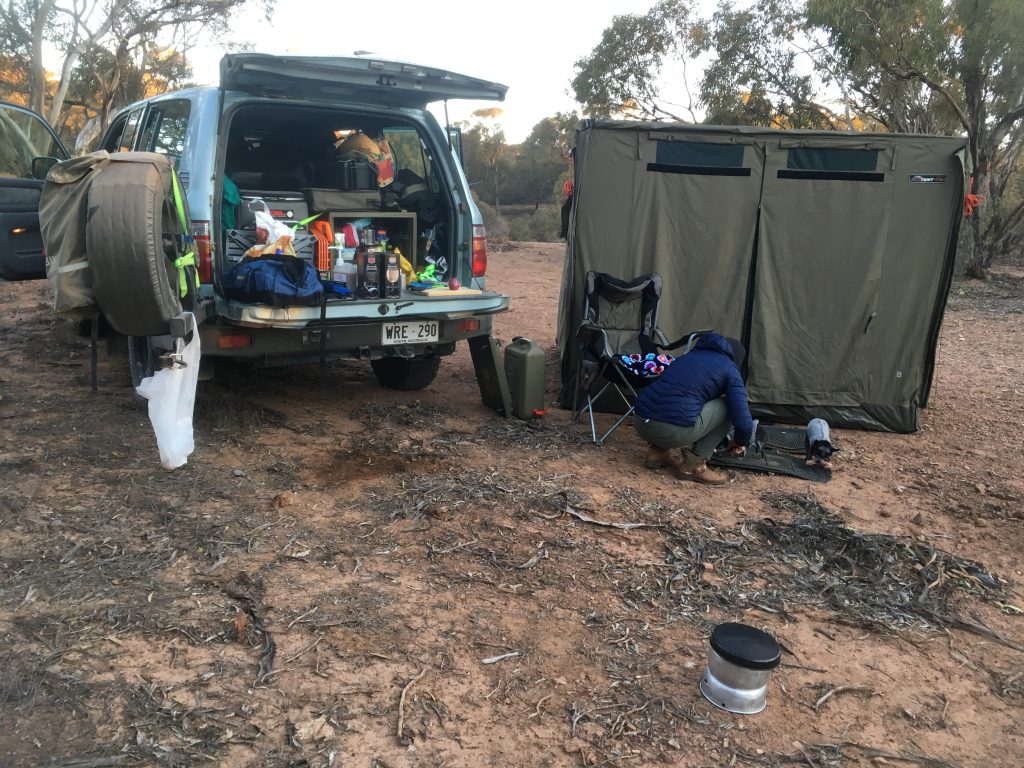 Rusty campers no more!
Into the town of Blinman, you could see the difference four years of more tourers coming through had made. New facilities, a new cafe, etc, was all good news for this Outback town. I’ve softened in my disillusionment of the increase in popularity of 4×4 touring and travelling. You realise that the places you used to have to yourselves are now well known and easy to find. However, with more experience you get better at finding the yet to be discovered spots. So just deal with it and up your game. Anything with a name or getting featured in the media is going to be busy, but Australia is a big place, with not a lot of people. Still plenty to be discovered, as you will see. 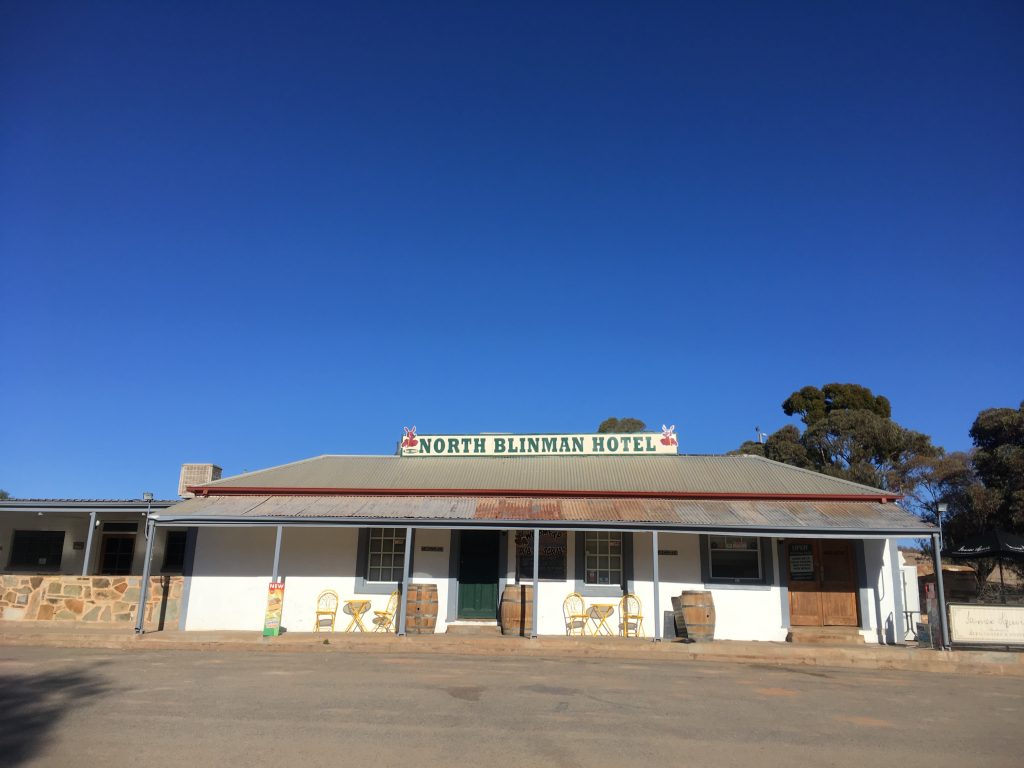 So I was still planning on the fly. I wanted to see the volcanic hot spring on the Arkaroola property, so we headed out that way. Funnily enough retracing the route I had taken back in 2014, in my first proper Outback trip in this truck, our Toyota Land Cruiser 105. 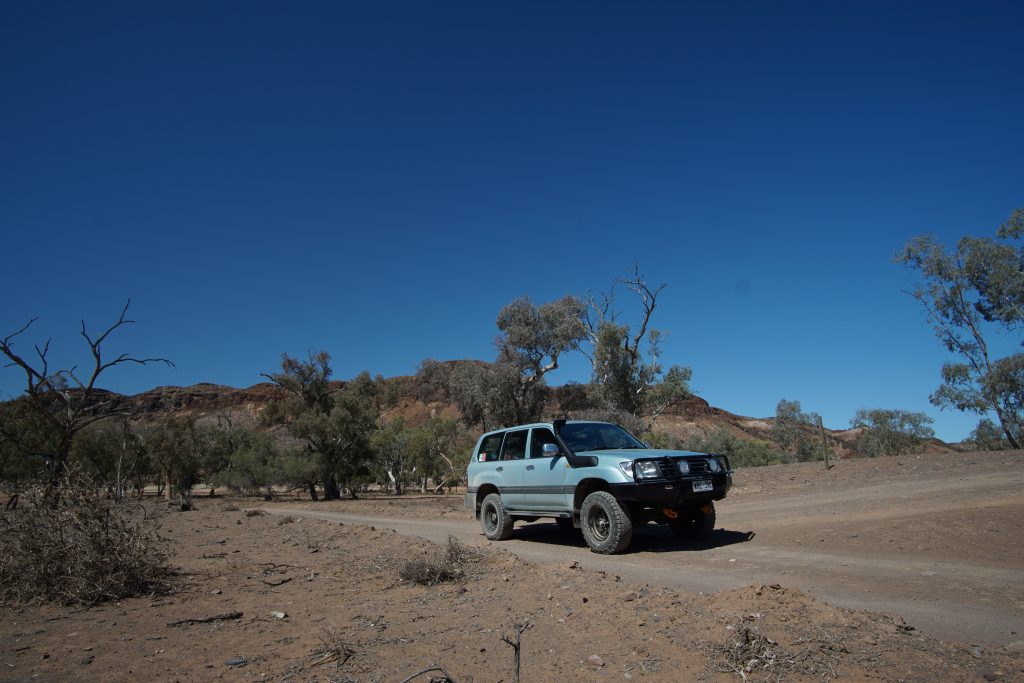 Views along the way. 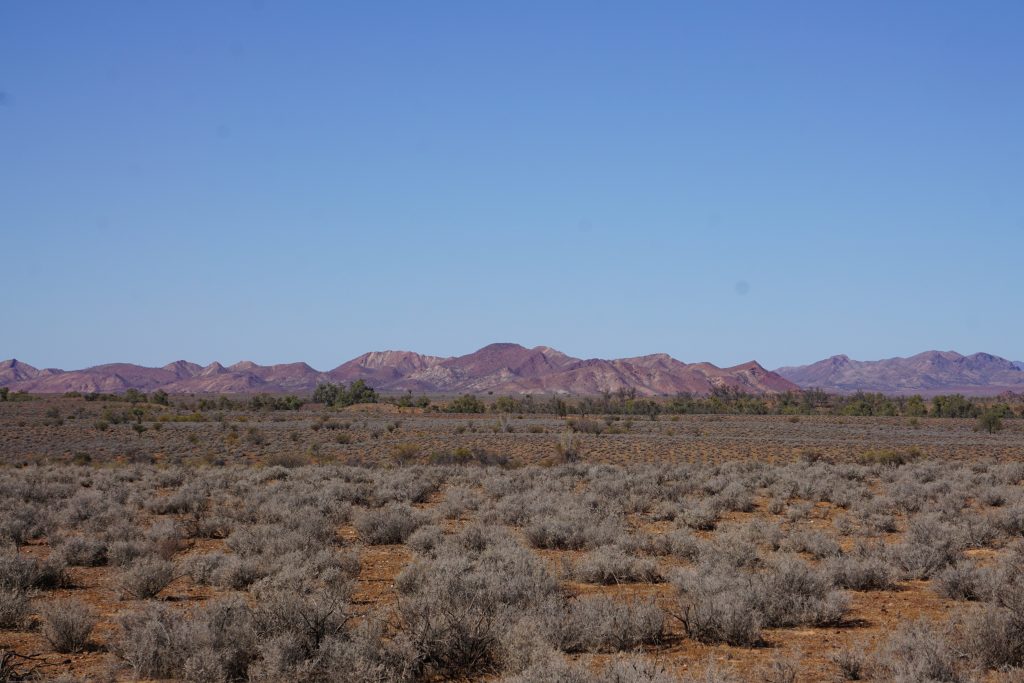 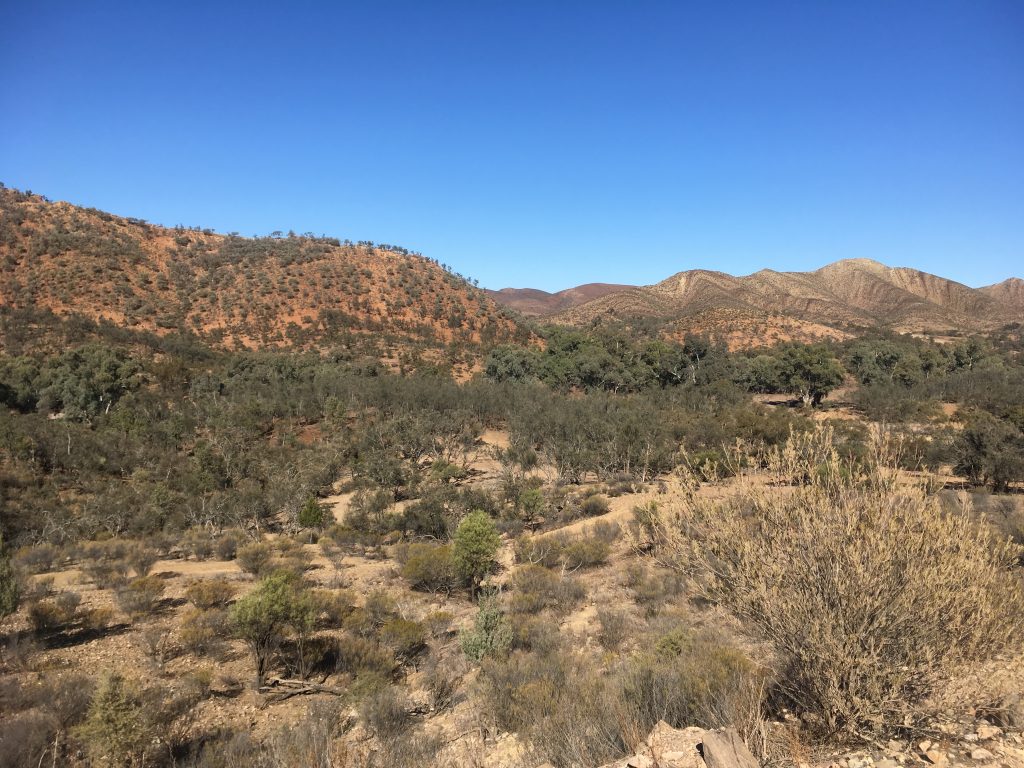 It’s a straightforward drive, but you have to concentrate. There are sharp angular rocks from the size of a grapefruit up to the size of a melon regularly in the road, just waiting to ruin your day. In a slow section on the way to Chambers Gorge we passed a Nissan Navara with 3 elderly ladies in it, good on them. I hope one of their family bought them a sat phone, just in case though…
Chambers Gorge is a mighty slab of cliff, that you used to be able to drive right into. The 4×4 access has now been stopped and you have to walk from the car park like everyone else. I guess this is the problem with increased numbers of people coming through, more people means more dickheads unfortunately. It only takes one to drive into the gorge, light a fire, smash a few beer bottles and that’s it. No more driving in, I guess be thankful it’s still accessible at all, being on private land. I don’t know if that’s what happened but you see similar evidence all over the place, what is it with breaking bottles anyway? /rant
Chambers Gorge was good to visit but hard to photograph. 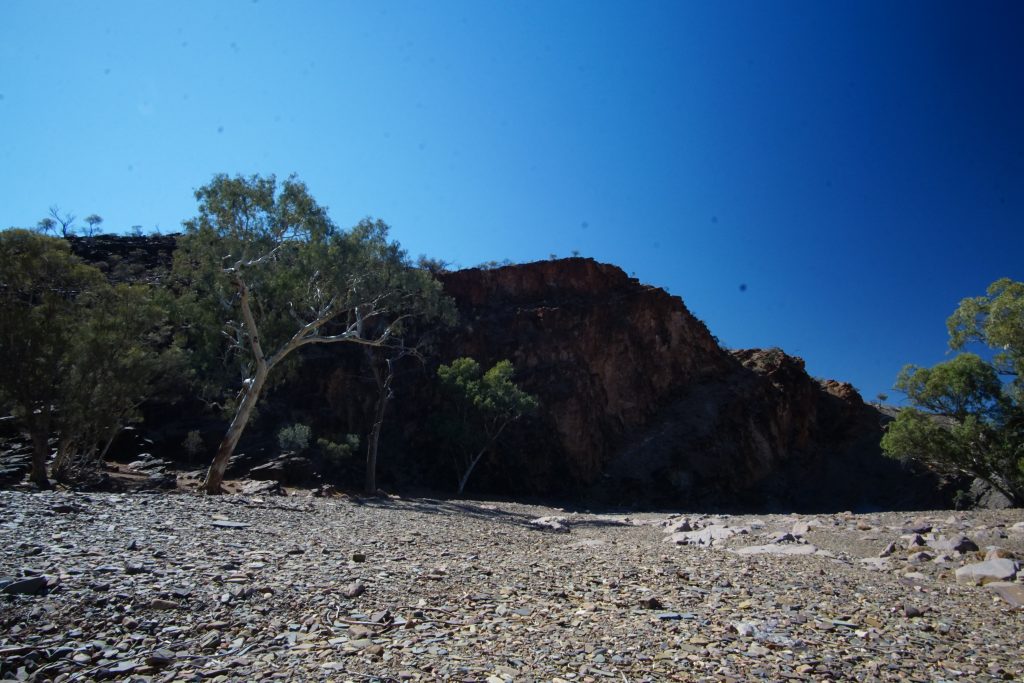 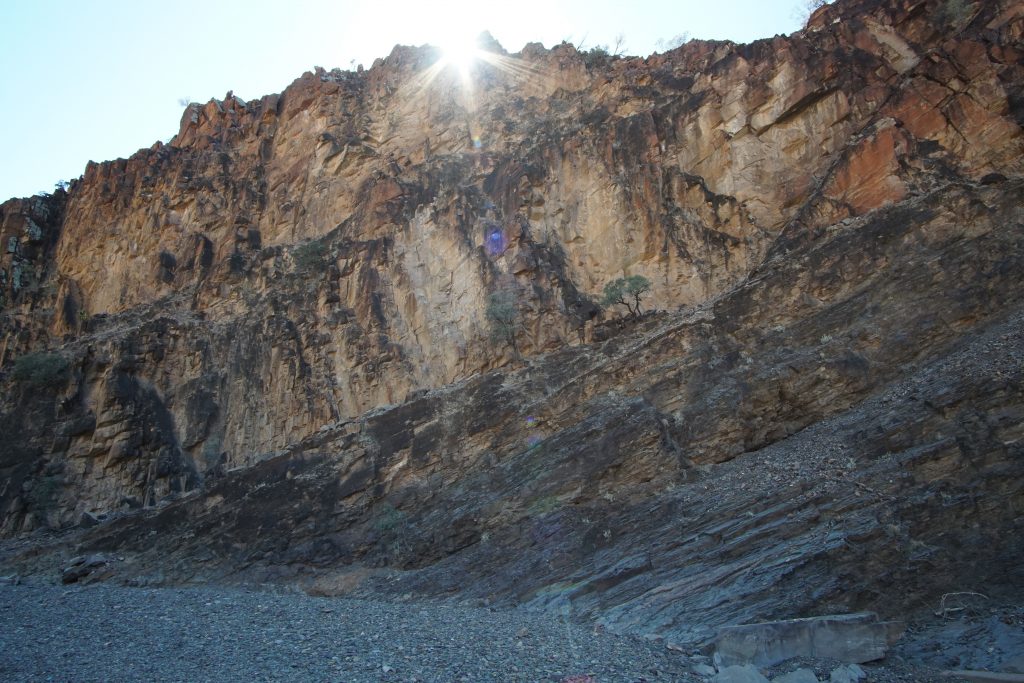 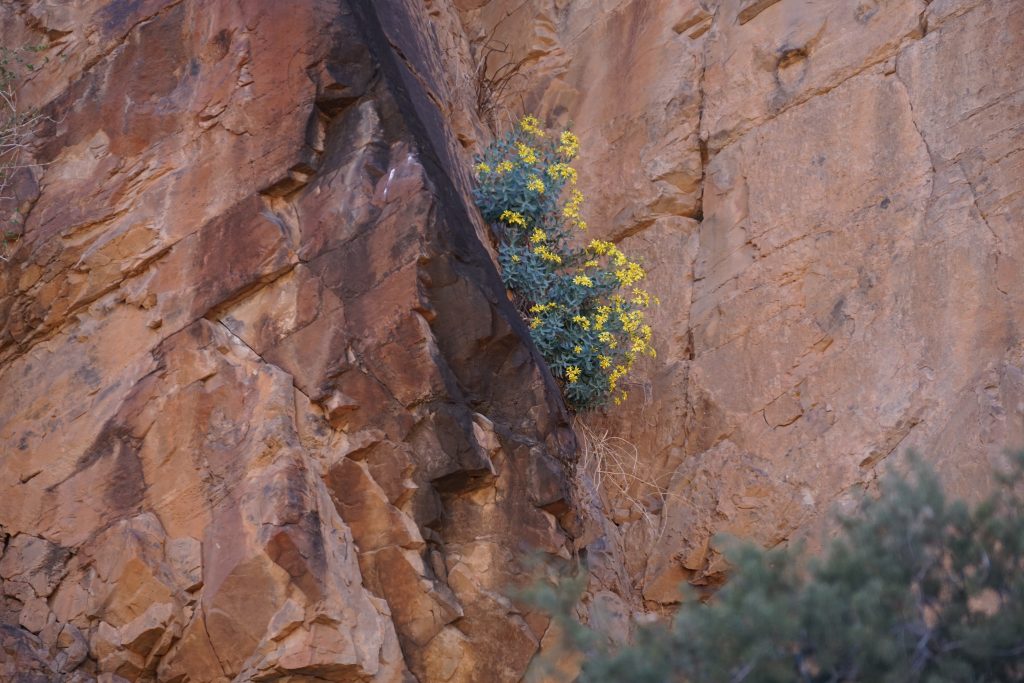 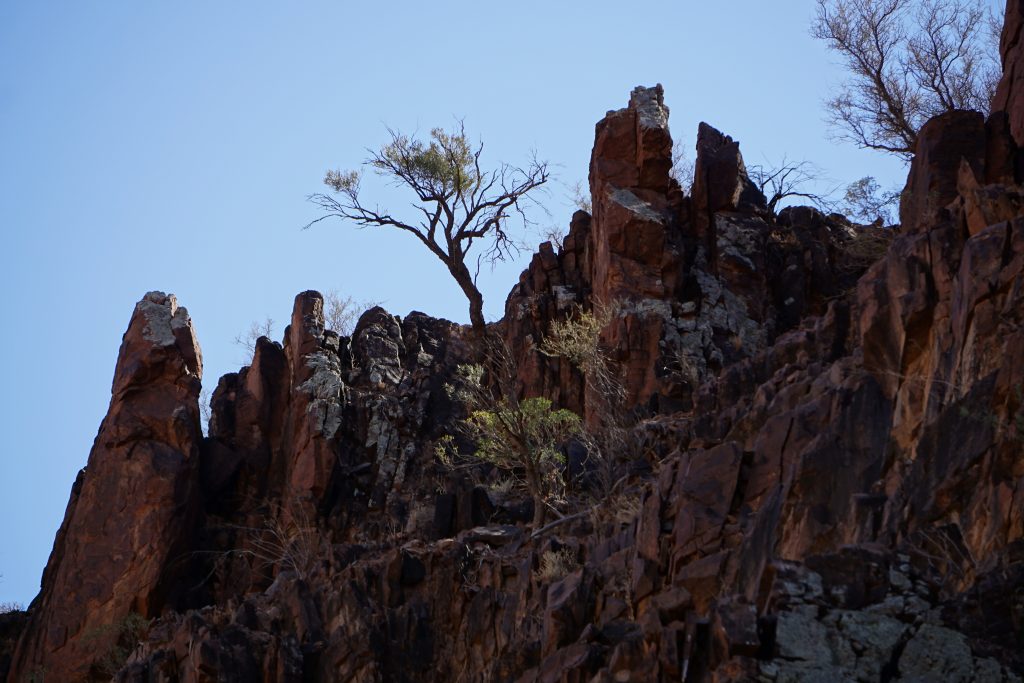 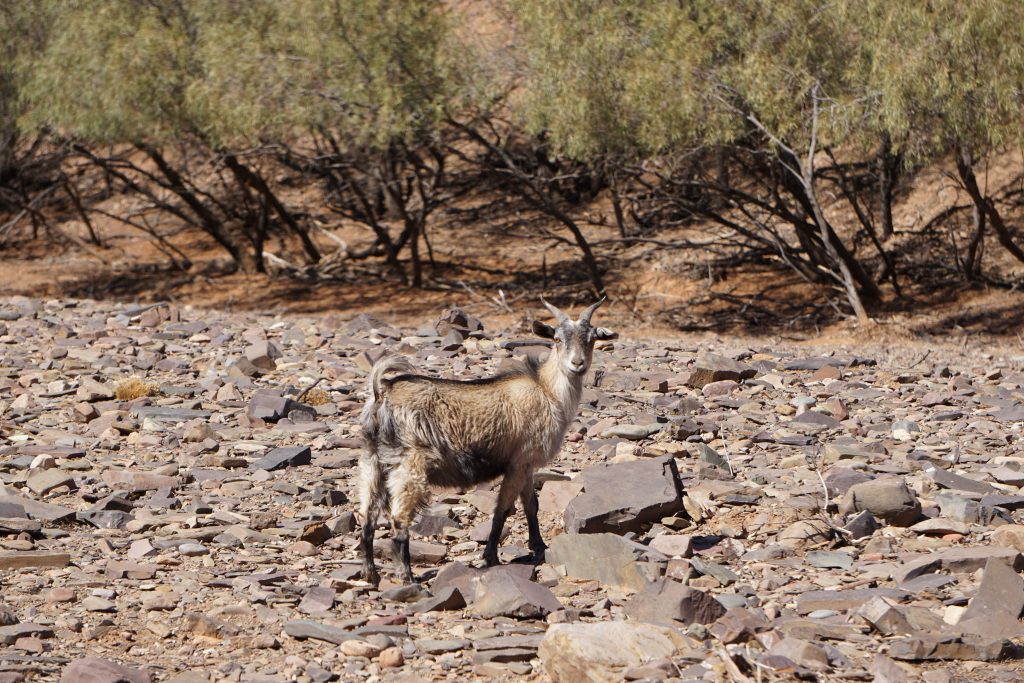 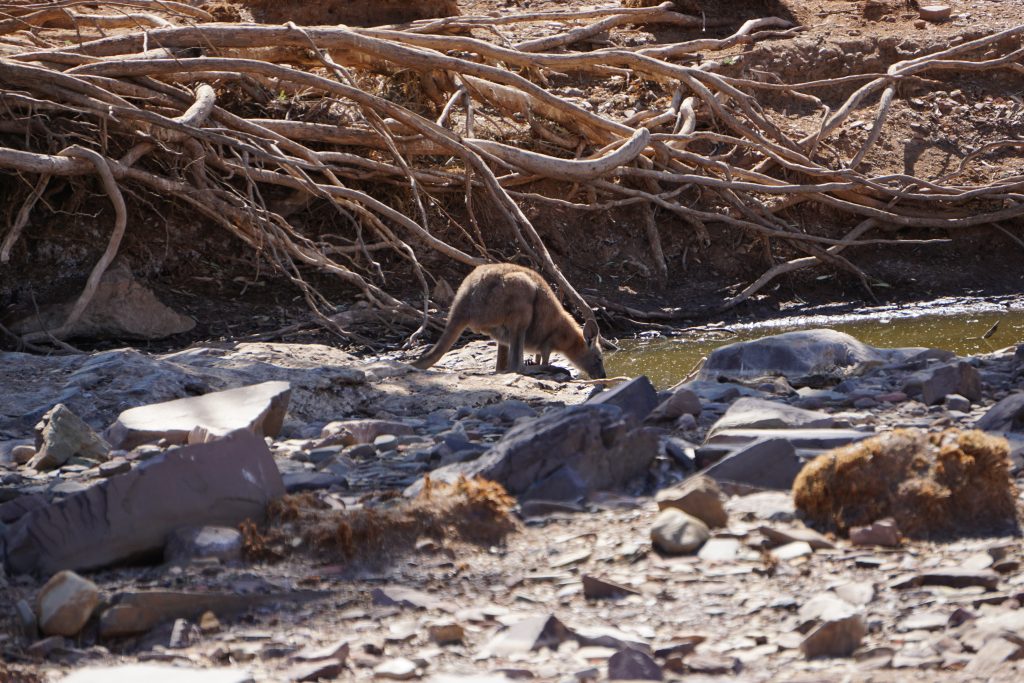 We pushed onto Arkaroola, that, plus the adjacent Vulkathunha/Gammon Ranges (Indigenous name/White fella name) National Park is a stunning area for many reasons and worth a visit all on its own. Last time I was here I was one of only a handful staying at Arkaroola, the guy who cooked (and served) me dinner every night got chatting and he explained that at times the 100-odd seat restaurant would be full it was so busy. Hard to imagine back then, but let’s just say Arkaroola was pumping this time.
https://www.arkaroola.com.au 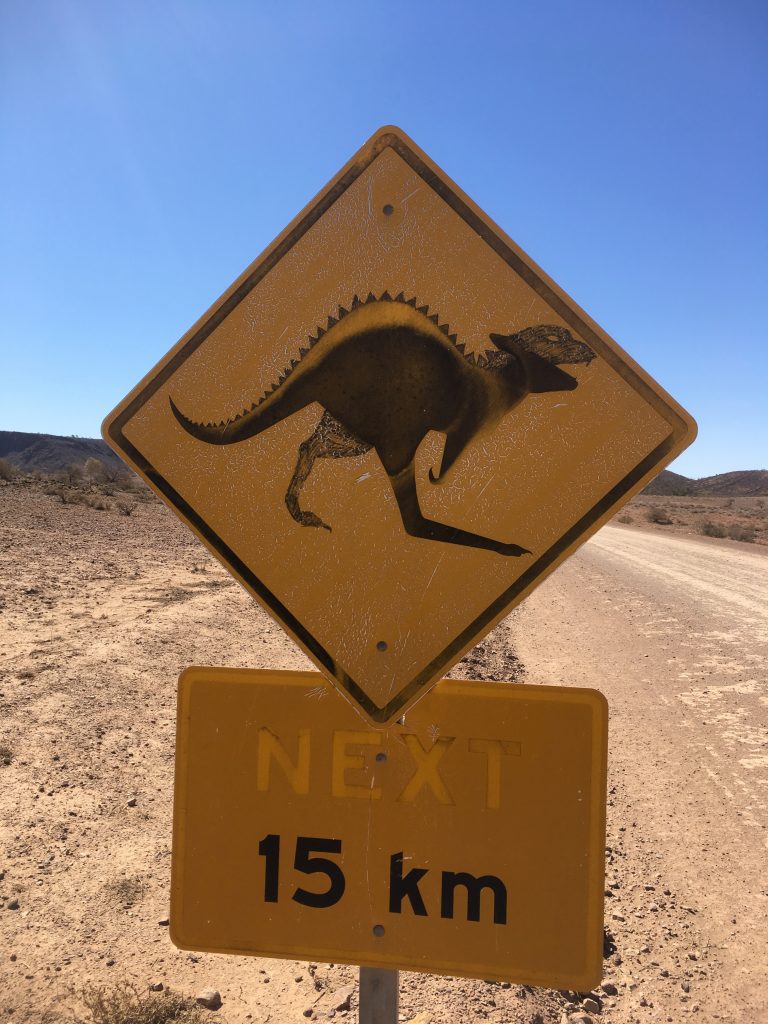 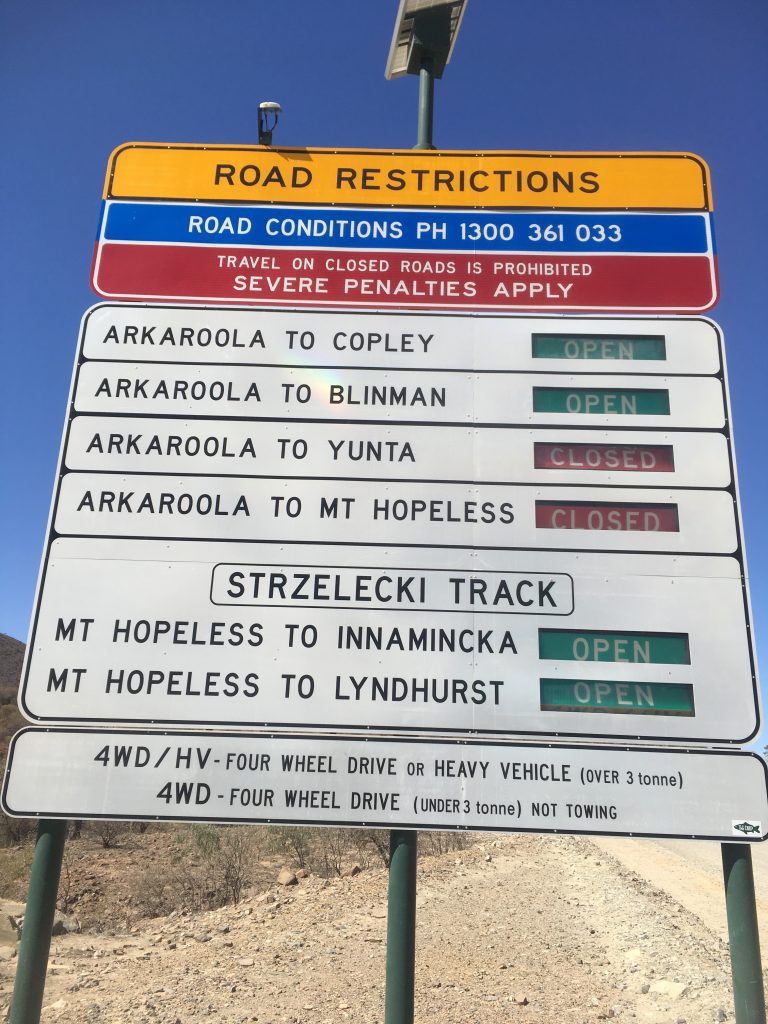 4×4’s, caravans, grey nomads everywhere. Hurried and hassled staff, it was a different kettle of fish this time round. I asked if the hot springs track was open and what was the approximate return time – as I had been thinking of doing that track and staying here tonight – about 3 hours was the reply, but not worth it as present. The springs were in poor condition with barely any water in them, and the track was rough. Part of me was saying ‘well I’ll just go and have a look for myself and I’ll be the judge of if it was worth it…’ but part of traveling together means you’ve got to consider the other person. If the staff are saying it’s not worth it, then it’s probably not worth it – I also remembered reading something online to that effect too. Plus I wasn’t feeling it, staying here when it was this busy.
So we topped off the sub-tank with fuel (not before handing over your credit card, as there had been some drive offs, very disappointing somewhere as remote as here – more people, more dickheads), and bought some crackers as we were out of bread (it seems they are called crackers as they are literally like crack (cocaine), evidenced by N pretty much finishing off the box of ‘chicken crimpy’ that lunchtime).
Heading back to the main road, we took the road that skirted around the eastern side of the of the range, soon into some of the most dry and desolate plains we’ve travelled through. So featureless was the road we actually put on some music for the first time this trip. 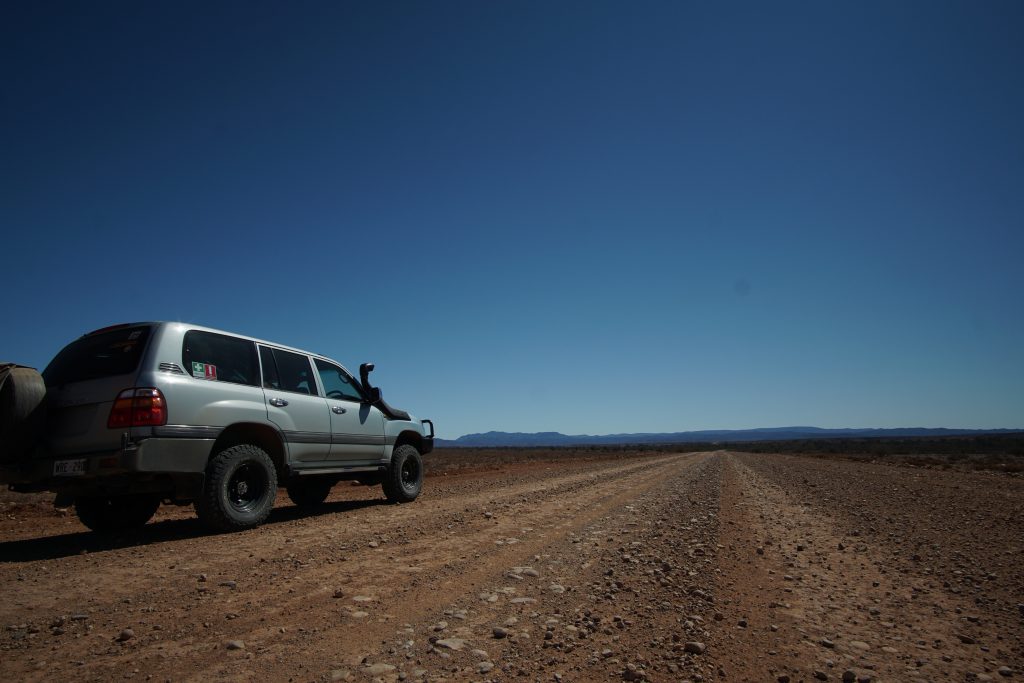 Although some trees put on a good show. 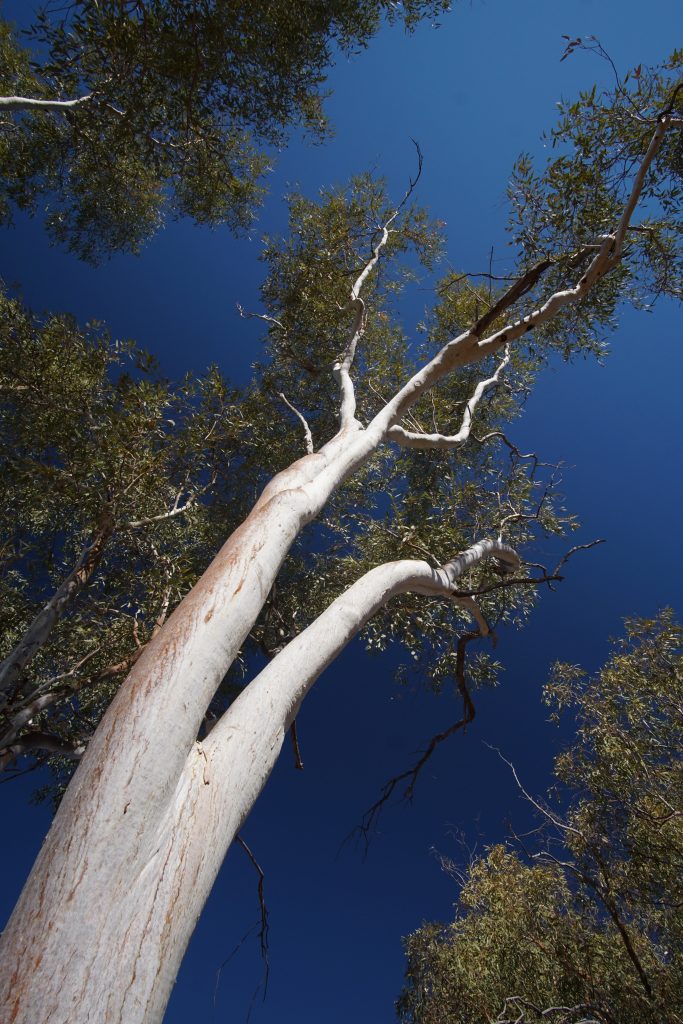 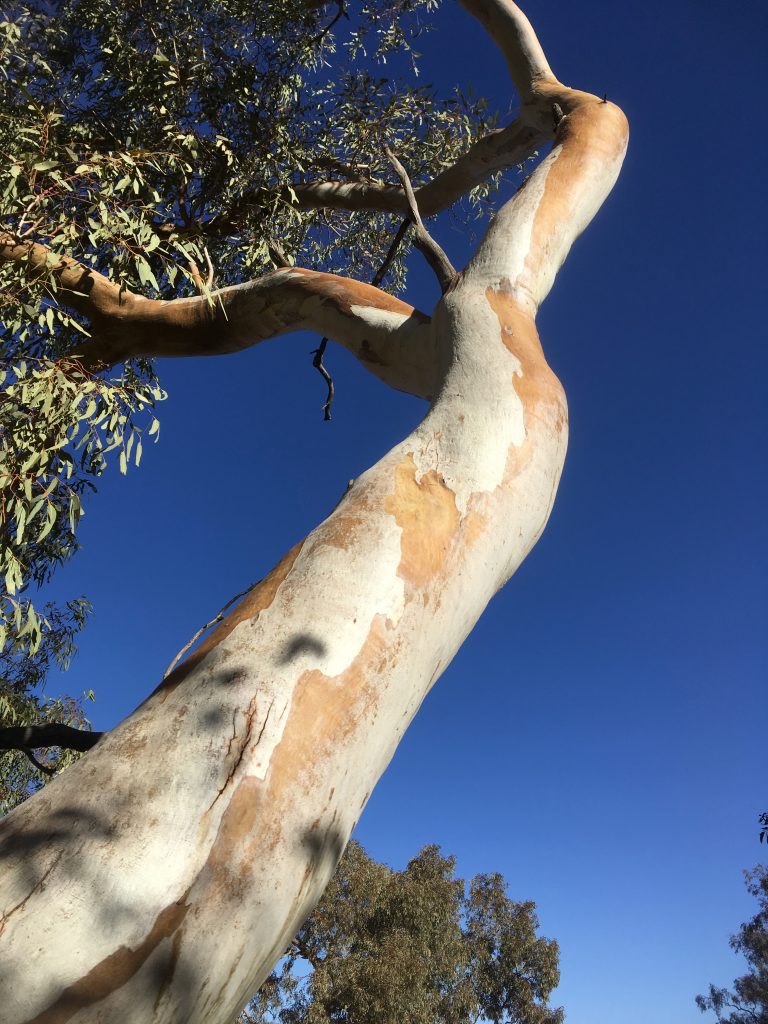 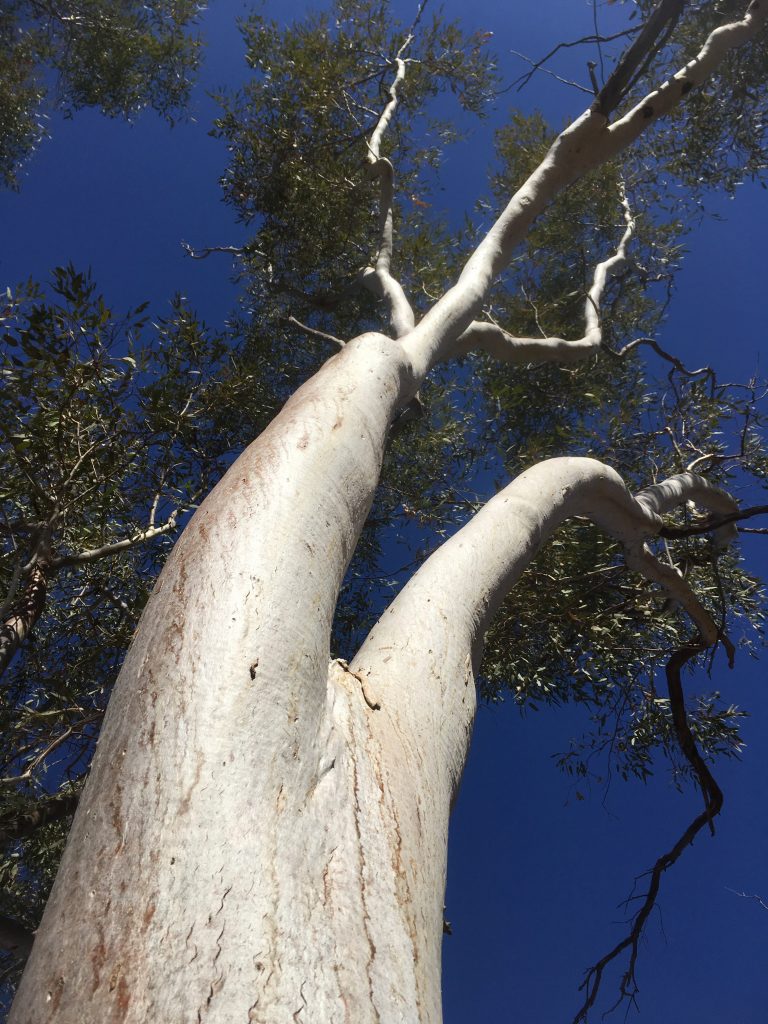 Eventually we skirted back round to the very tip of the range, from a distance you can literally see the mountains petering out into the flat plains. Here we swung left, due west.
On a more minor track than we had been on. I even triggered the ABS on the Cruiser braking down into a steep gully, time to switch from high speed dirt road mode to a bit more slowly and carefully mode. Right, it was time to find a campsite.
Again, the exploring gods were smiling on us. A beautiful dry creek bed leading to an impressive gorge, with a single water hole in it. From which on our arrival we probably disturbed about 100 kangaroos, amazing. I also nearly got the Land Cruiser stuck so soft and silty was the creek bed. Low range just about pulled us out. Since leaving the Arkaroola turn off, we hadn’t seen another vehicle. It didn’t take too much thought to decide that this would be our home for the next two nights. 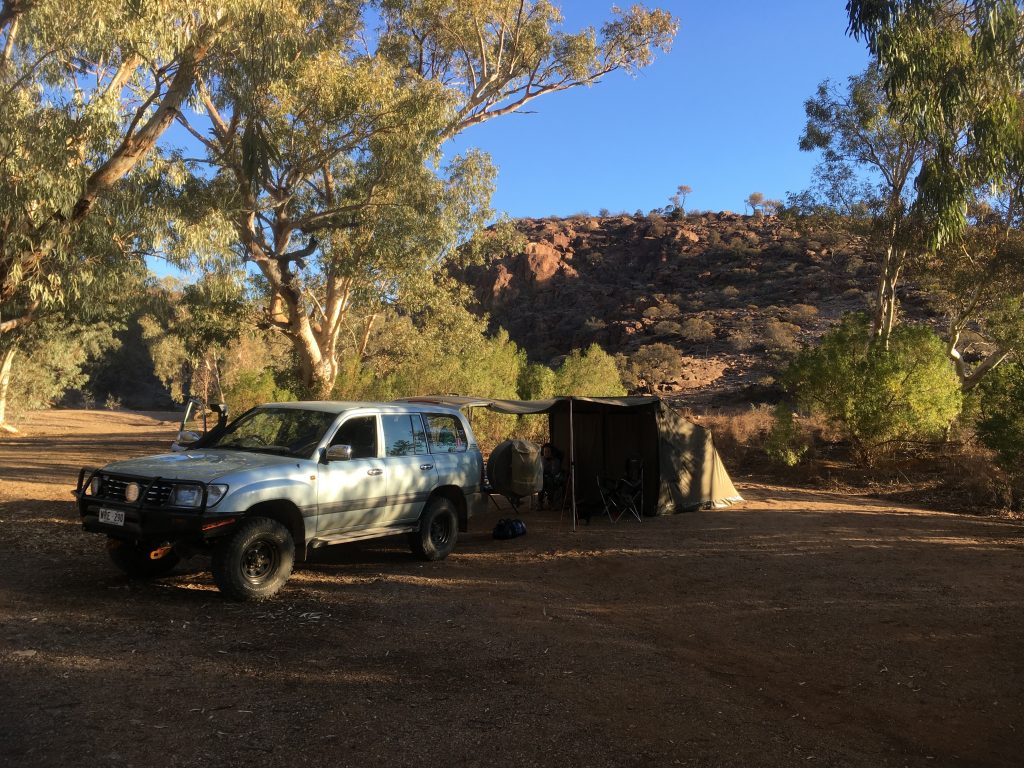