After taking some time to exercise, something we are keen to keep on top of when we are on the road. Then restocking and refueling in Alice Springs we head west by a couple of hours. Taking a barely marked dirt road just before the indigenous town of Hermannsberg, a few metres down the dirt road we got a sign, that was more my sort of sign. 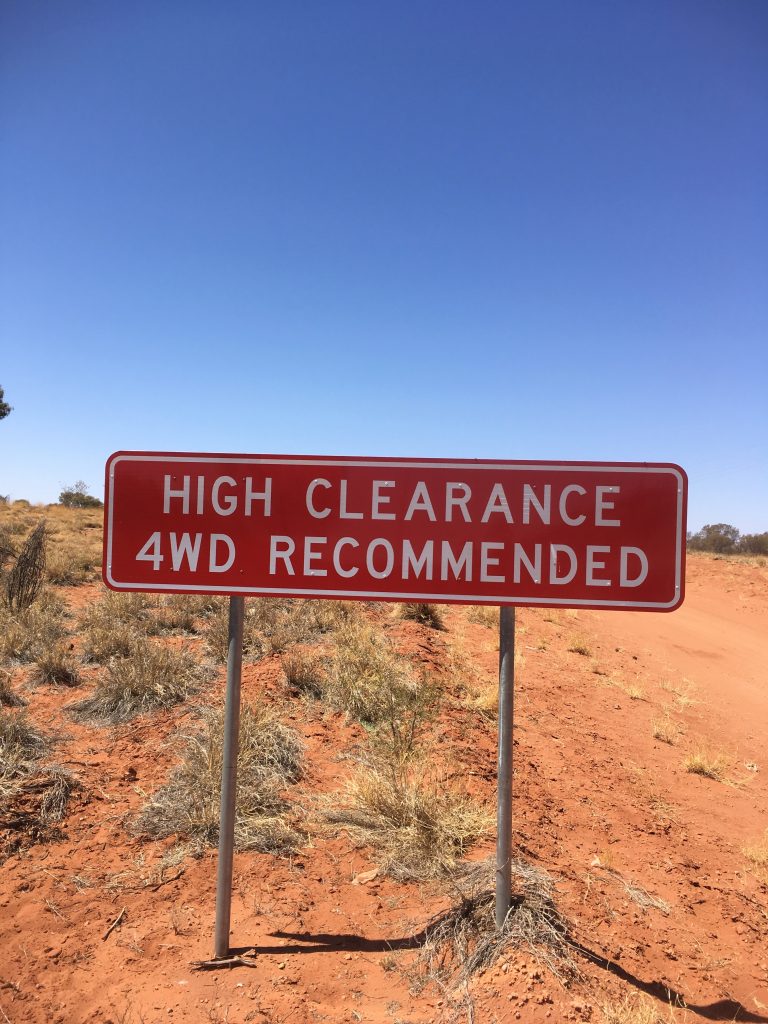 Just a normal corrugated dirt road until we got our first signs of what we came for, the Finke River.

‘He frequently employed John McDouall Stuart as travelling companion on these trips: Finke had the resources; Stuart the resourcefulness.’ – Wikipedia

One of several things to be named by explorer John McDouall Stuart (the Australian explorer’s, explorer?) after his sponsor William Finke – although that name probably resonates mostly these days for the Finke desert race, internationally known race down the old train line between Alice Springs and the tiny township of Finke, also referred to by its Aboriginal name of Apatula.

Back to the river. Often referred to as one of the oldest rivers in the world, as with many of Australia’s river systems the vast majority of it, the vast majority of the time it is dry. Or as this one is, a series of waterholes. However in times of flood this one can reach all the way back down to Lake Eyre, that we could see from the start of the Oodnadatta Track – many litres of fuel and two shock absorbers ago… Hard to believe at the moment? Well something shaped these rocks… 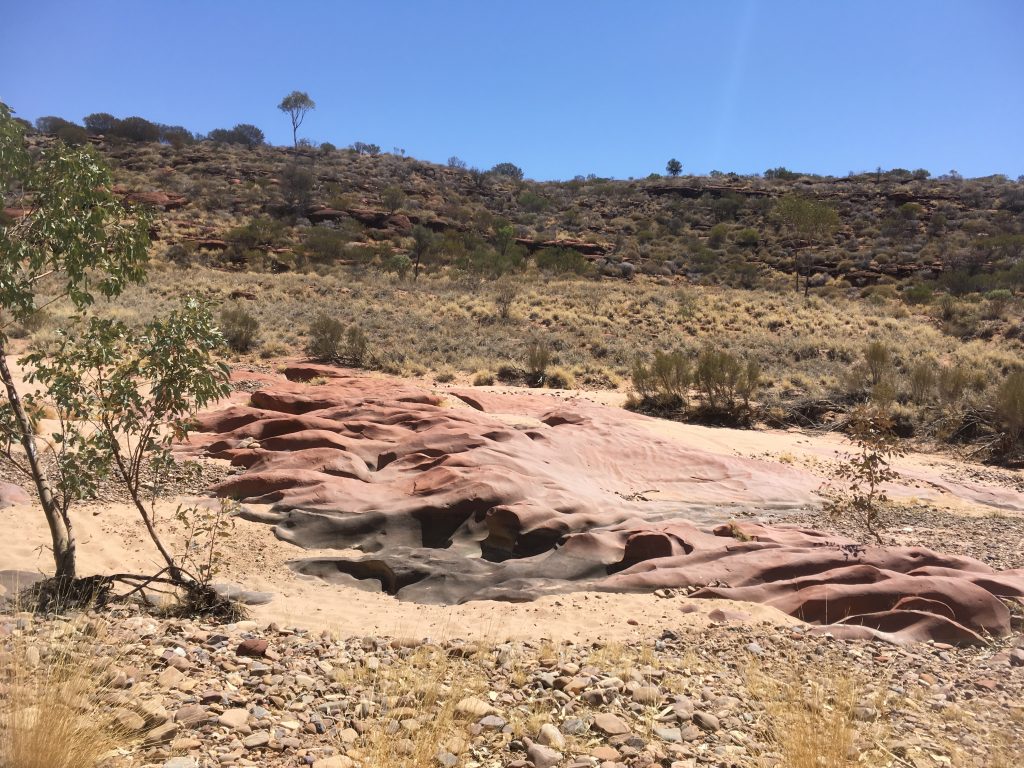 Driving in you can see where the river carves between the red rocks. 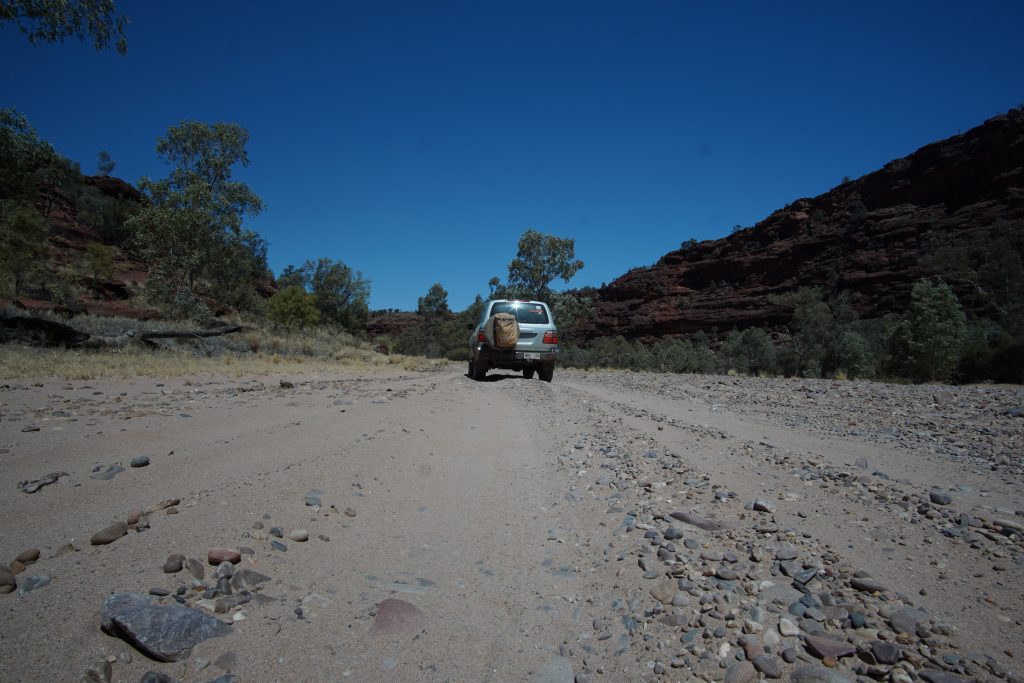 There are some sections with some bigger holes, and some that are quite soft sand, at the start. I dropped my tyres coming onto the dirt, but not by that much. If there is a ‘chicken track’ around, I take it. 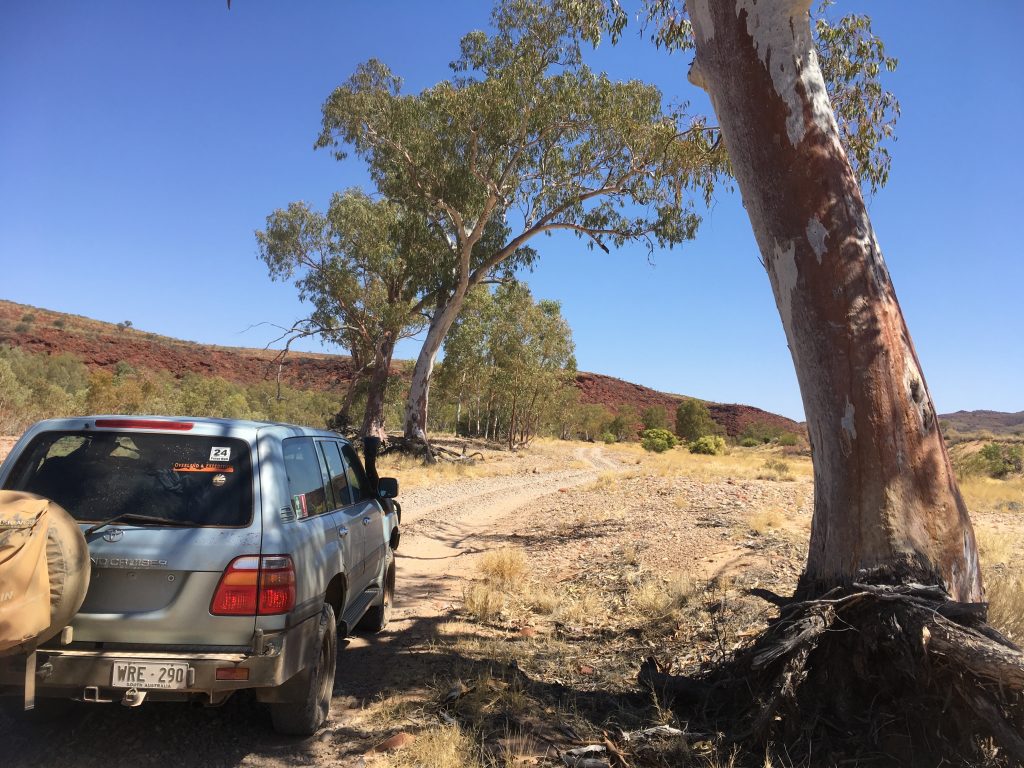 The track pretty much follows or crosses the dry and sandy riverbed. Now we start to hit some sections where even in low range the truck is labouring. More air comes out of the tyres. 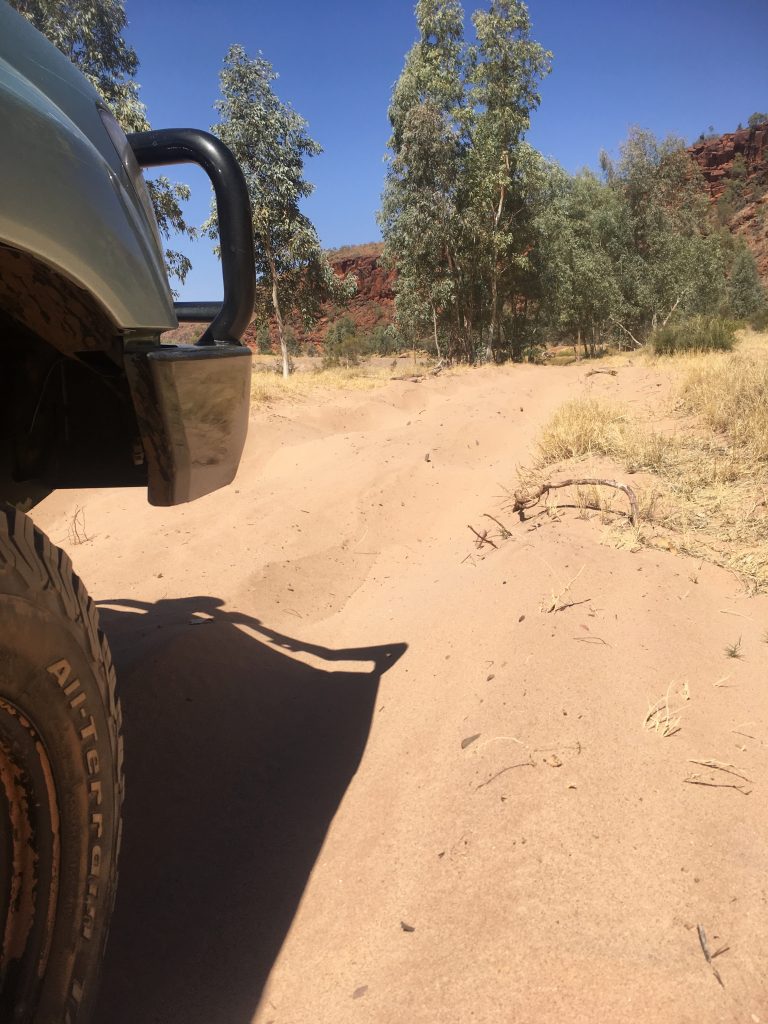 We make it to Boggy Hole, a permanent water hole here. With birdlife and fish on display. All in all a beautiful spot, albeit one with a dark past. 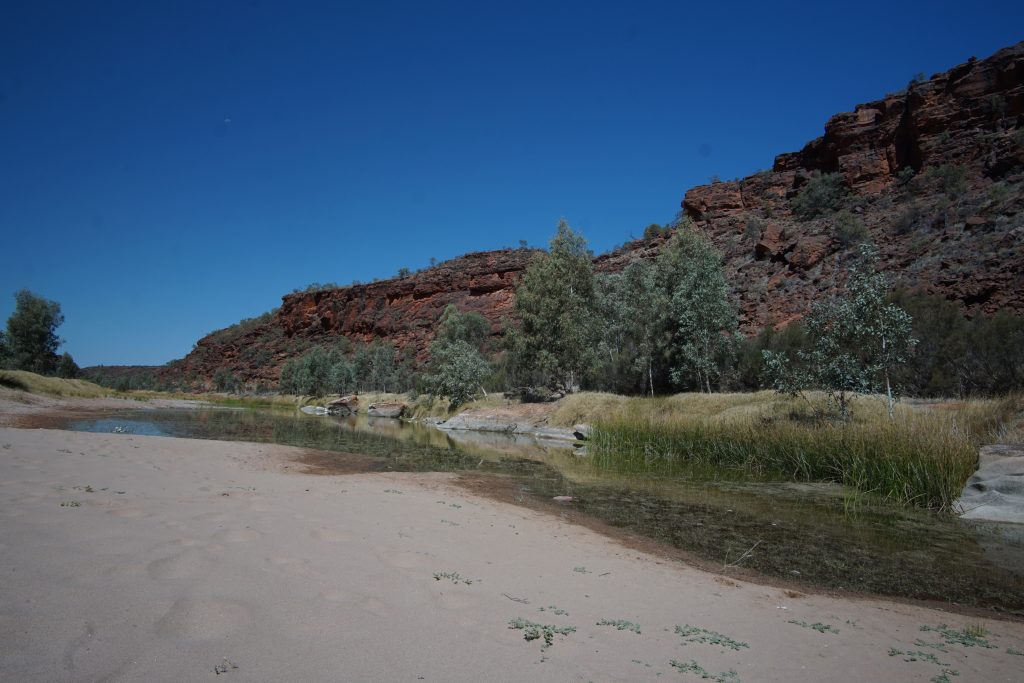 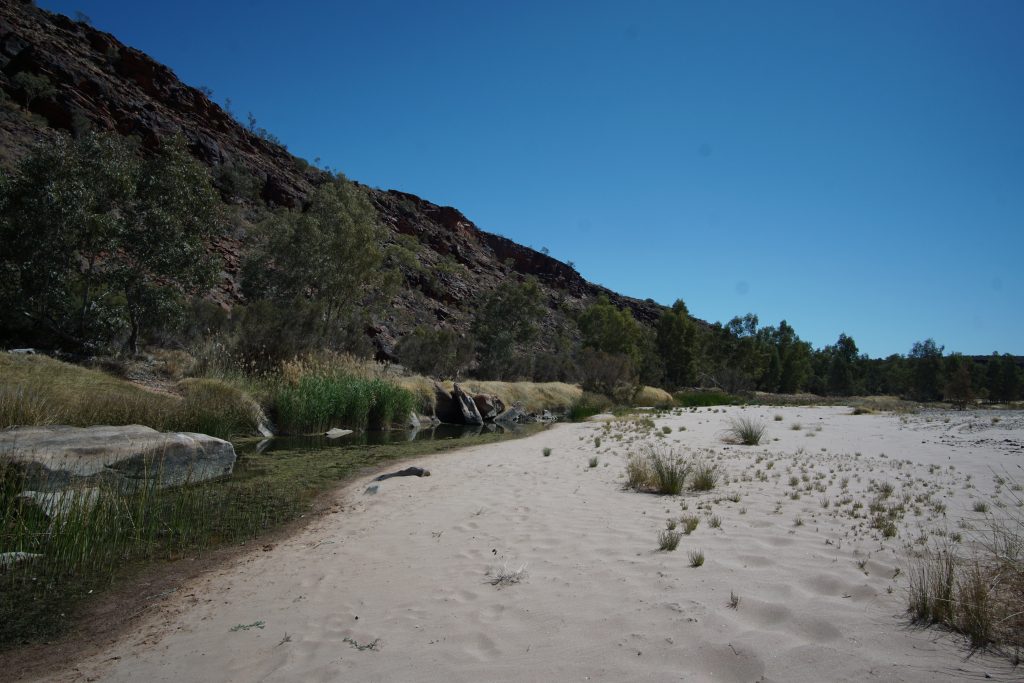 “This is the scene of one of the most shameful episodes in the settlement of Central Australia when a mounted constable, William Willshire, and his four native constables were based here to help control cattle killing by the local Aboriginal people. Willshire was implicated in a number of killings and was later charged with murder – the first policeman to be so charged in Australian history; he was controversially acquitted. “ – Ron and Viv Moon, 4×4 Australia. 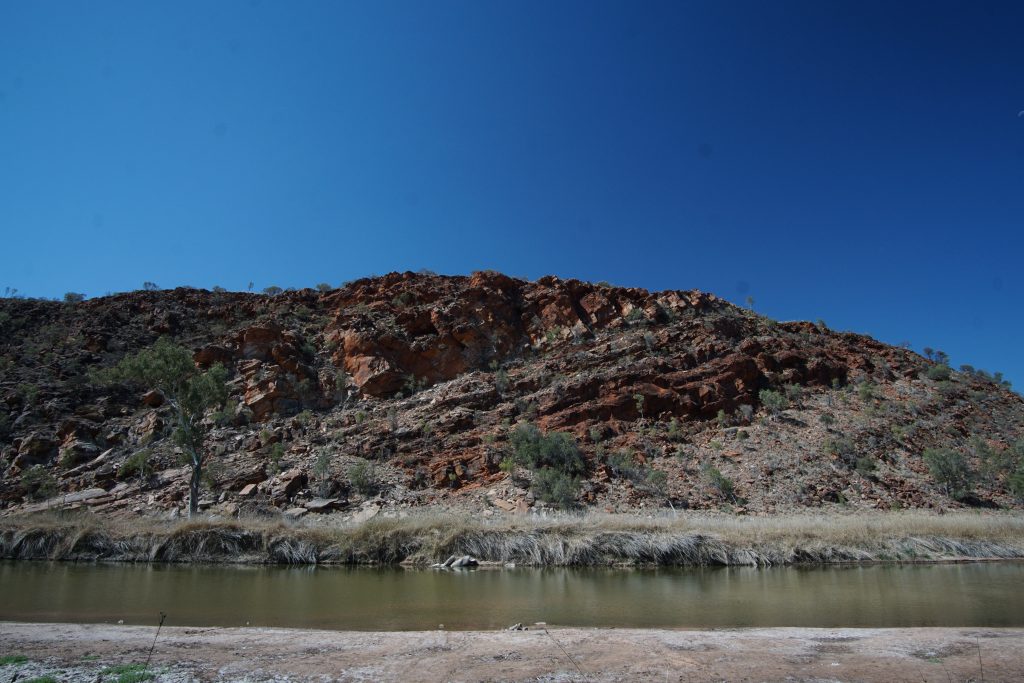 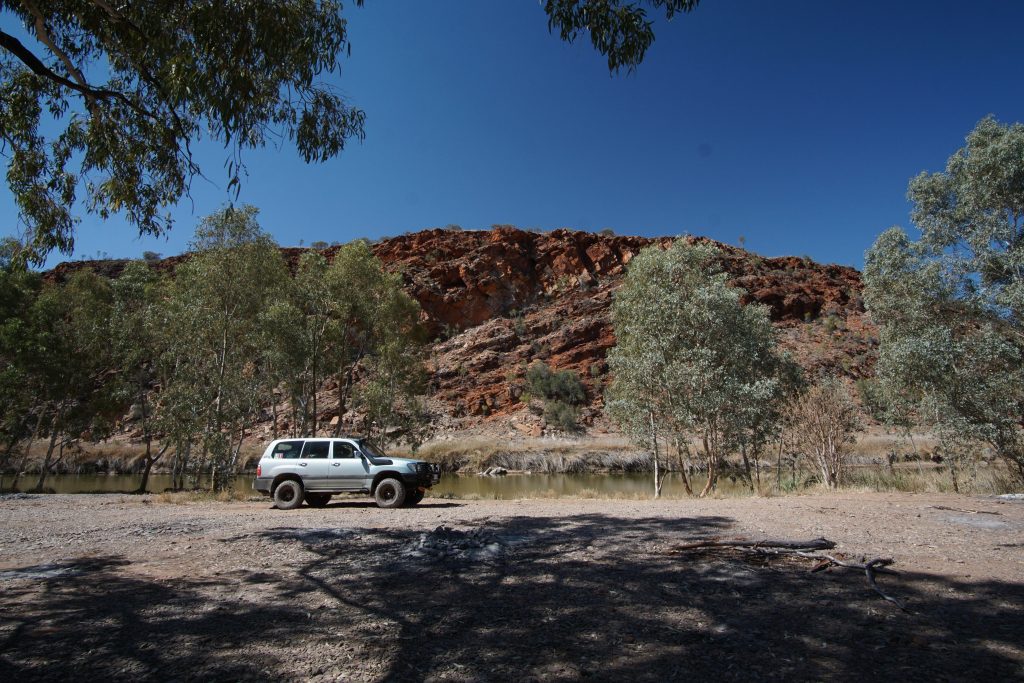 Speaking of birdlife. All through the Territory we have been entertained by the vibrant flashes of the Rainbow Bee-Eater, way too small and fast for a photo, but worth keeping your eye out for if you’re up this way. 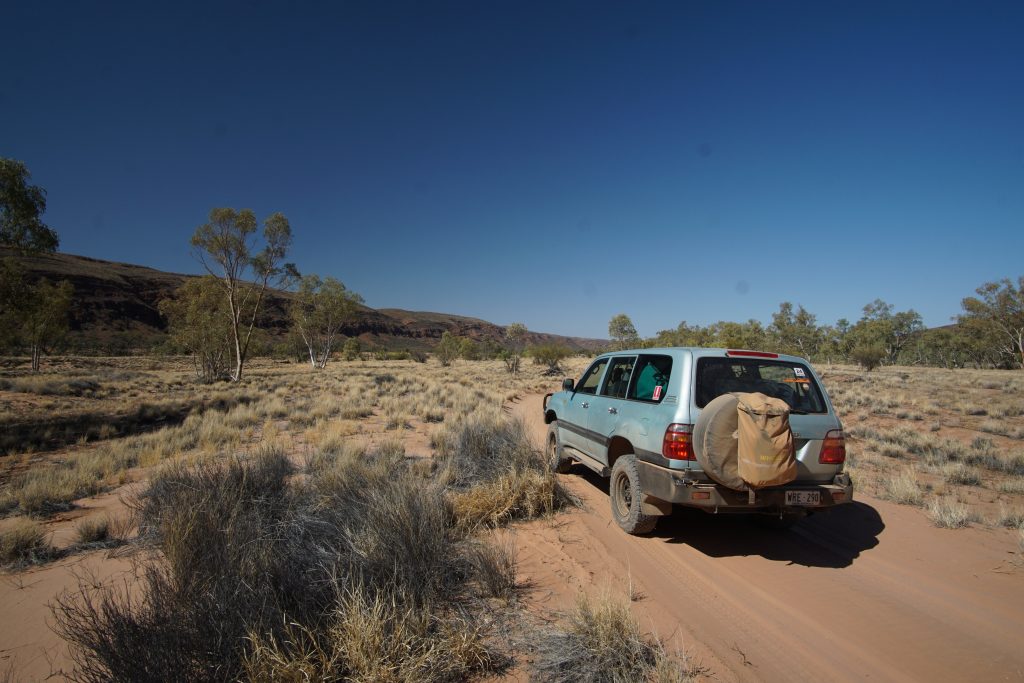 The track now climbed away from the river for the first time. Up into higher, rockier country. 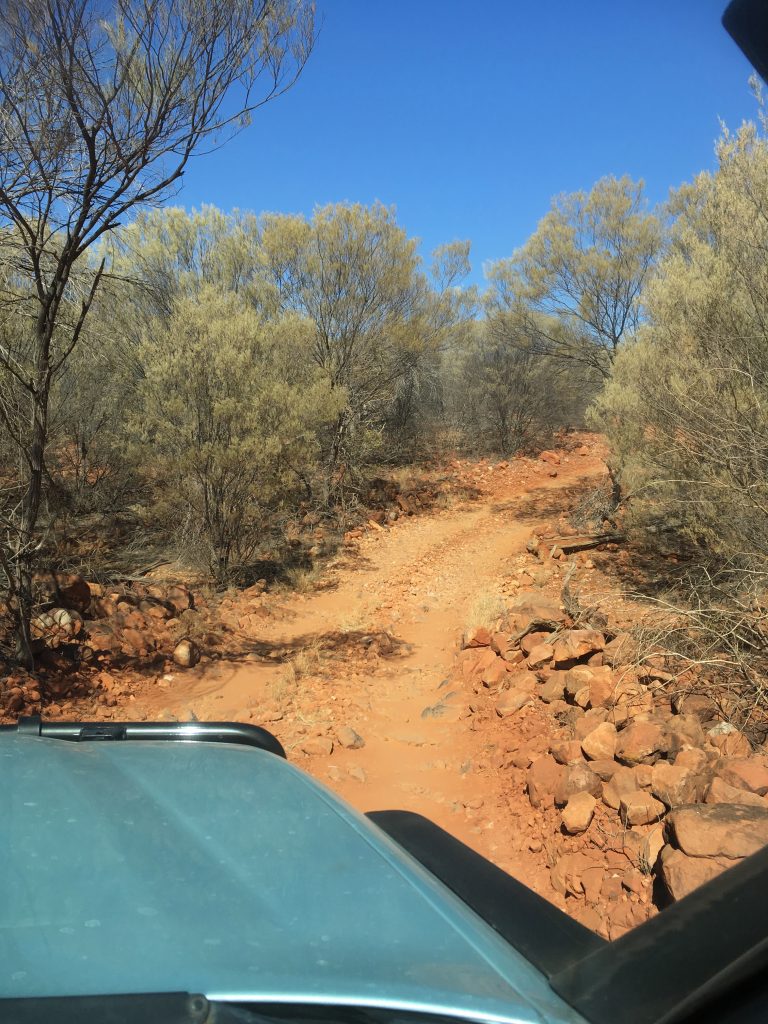 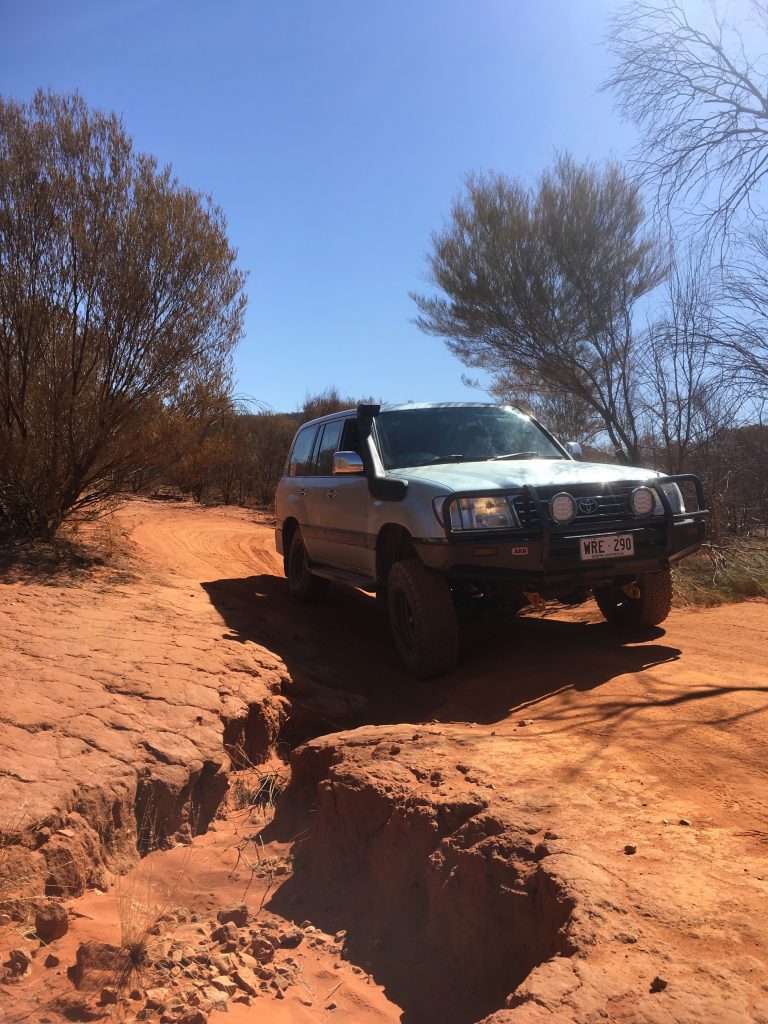 We wound on, after one dead end we decided to trust the sporadic signage rather than my instincts. Although we came across a junction with signposts but no signs (washed away?), I guessed that the other track with a signpost must be the main one, and that seemed to work out when we then passed the only other vehicle we would see that day. A couple of generations old Toyota Prado, with seemingly minimal modifications. He didn’t stop to chat. I would normally have swapped notes on the track we had just done, but so be it.

Another junction with dubious signage. Again I choose what seemed to be the logical direction (you are not supposed to leave the main track through this National Park), which seemed to be justified with some well established wheel tracks in front of us.

A few k’s later we again came across the river, this time very much a defined riverbed. However, our previously well defined track disappeared. As usual when I lose a track I stop immediately. The Australian bush is very effective at disorientating you in my experience, so before I lose where we came from, I confirm that, before worrying about where, or if we go forwards.

She must be a big river when she flows. 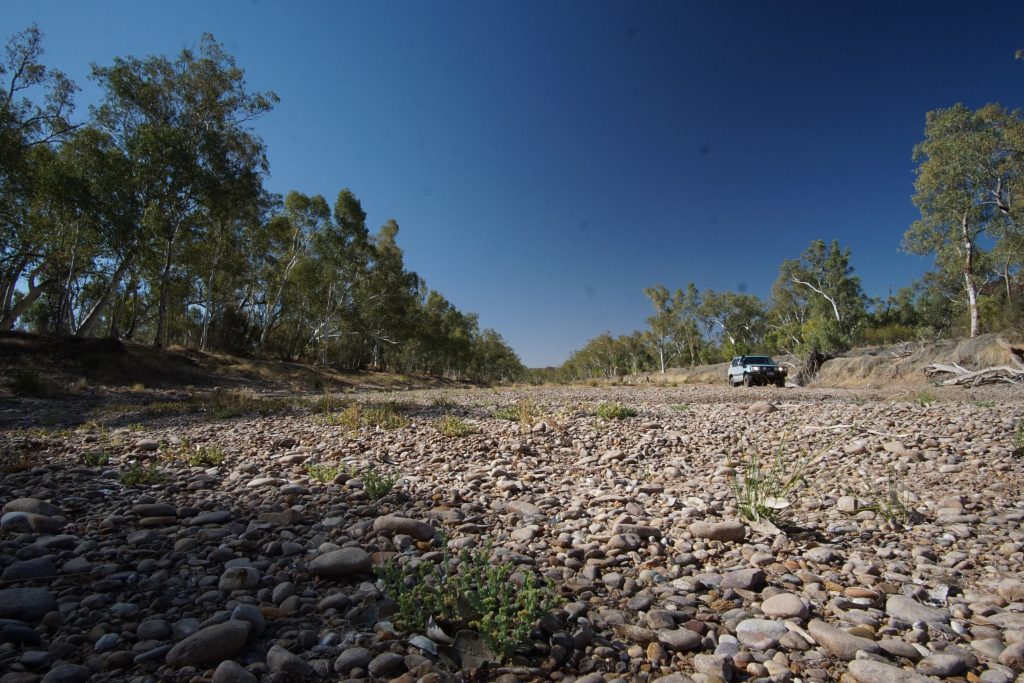 Eventually our track heads out of the river bed, this sand is the softest yet. We get about halfway before Bertha grinds to a halt (at least when I decide we’re not going to make it and just take my foot off the gas rather than braking to a stop, and creating little sandbanks in front of the wheels). N asks “how did that Prado make it through?” I mumble something about it being much lighter, but it’s a good point.
I back up, we’ve still got some pressure to come out of the tyres if need be, but I’ve been kind of forgetting I went to the trouble and expense of fitting differential lockers before this trip. So I lock in the rear and have another go, with a bit more throttle this time. We make it no problem, and the track goes exactly nowhere…

We both get out and have a scout around. We’re not the first to do this, there are several tyre tracks and a few venture off into the bush, but not very far. There are banks and gullys too steep for a big 4×4 and nothing obvious afterwards to even make it worth trying to traverse them.

Nothing for it but to back track (N later admitted to me that after our exercise session that morning she was feeling way too tired to be properly lost, she had the good sense not express this directly at the time!), then just as the track goes back into the river bed, we see a side track that goes straight up the riverbank. 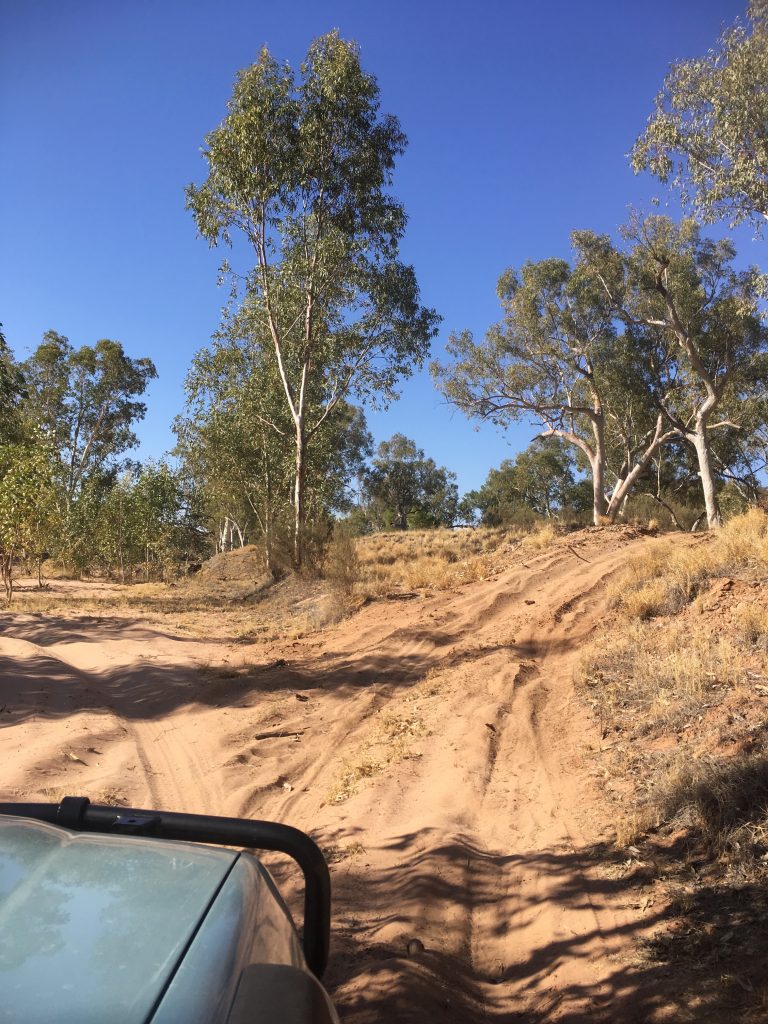 Soft, steep and bumpy (as usual the photo makes it look like nothing) I say “that must be where the track goes, we missed it barreling out of the river bed” N says “can we make it up there?” remember now we are at full touring load, over three metric ton. I pop in both lockers and holler “big girls can dance!” and gun Bertha up the riverbank. We shoot over the top and land, yep, on the actual track…

Smooth and well driven, it leads back the way we came down the river, but along the top of the bank rather than in the bed. That must have been the way the Prado went, helps explain why he didn’t stop to discuss track conditions. I hope they get through the soft stuff at Boggy Hole ok. Also explains that all the checking I was doing on the GPS to make sure we were still on the actual track didn’t show any deviation. We couldn’t have been more than a few hundred metres away. So we took the wrong turn at the last unmarked junction, we weren’t the only ones, shit happens.

Soon out of the park we were onto a station. No do/do not signs so, just the Territory 4×4 club signs we’ve seen on many tracks. The track through the station is interesting enough to keep you awake. 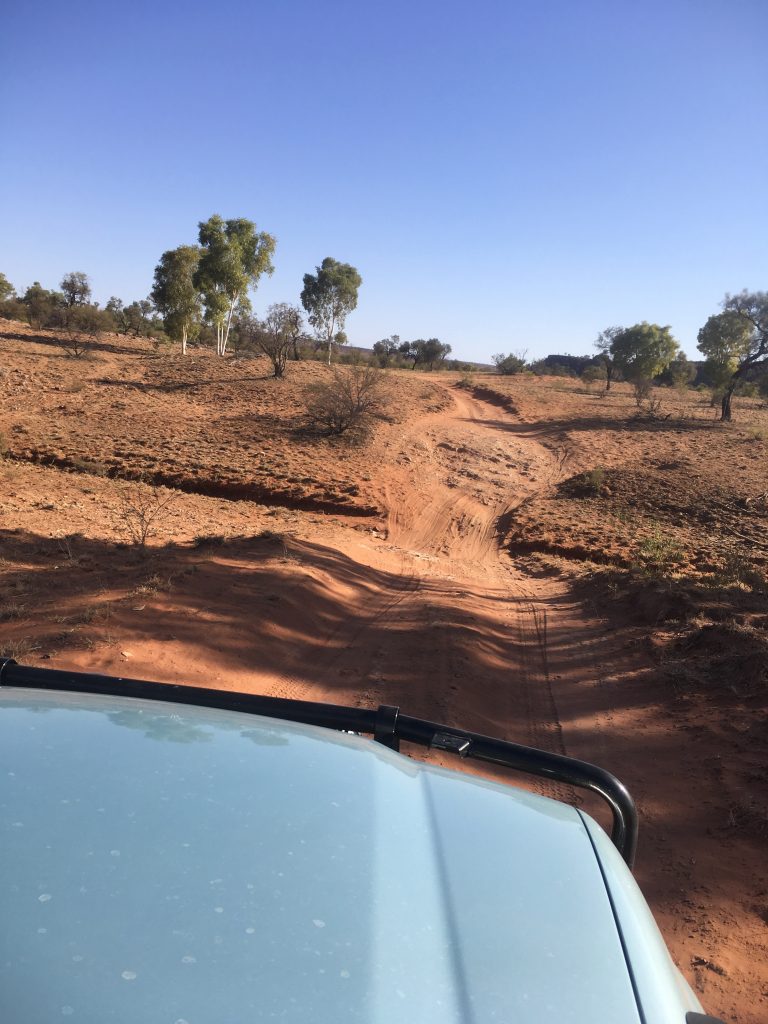 As the shadows get long we start to look for somewhere to camp. It’s mostly spinifex, and more spinifex, until N spots a ‘clearing’ under some native pine trees that drop enough needles the spinifex won’t grow there. We burble off the track and set up under the trees. 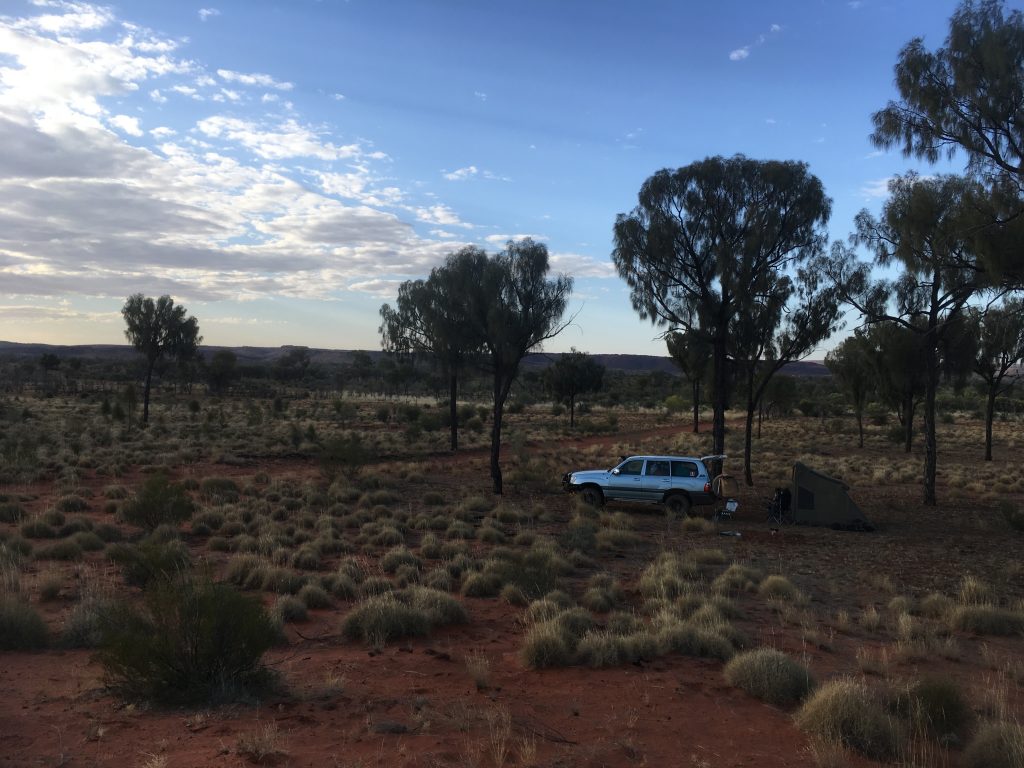 I clear an area and set the fire pit going with some charcoal. We’ve been hauling a piece of pork belly around for the last few days waiting for the opportunity to cook it on a fire. Not sure I’d have a ground fire here, but the fire pit allows a nicely controllable and mess free option. 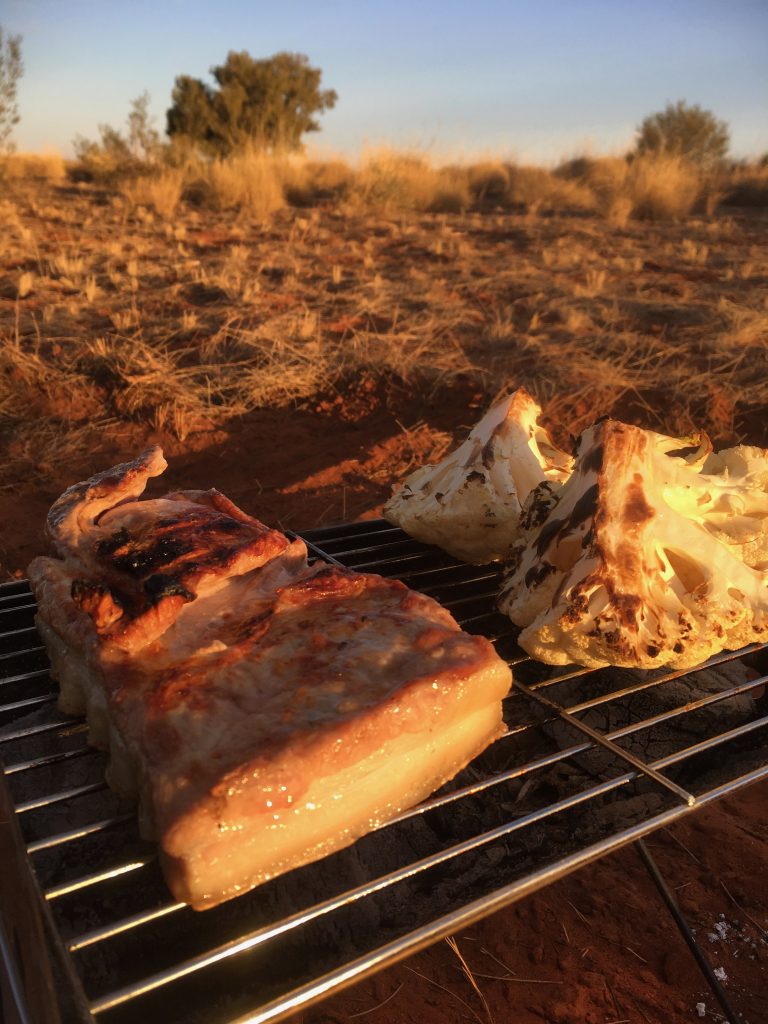 Charred pork belly and cauliflower, plus a sunset that highlights the beauty of where we are. This is what we do this for. 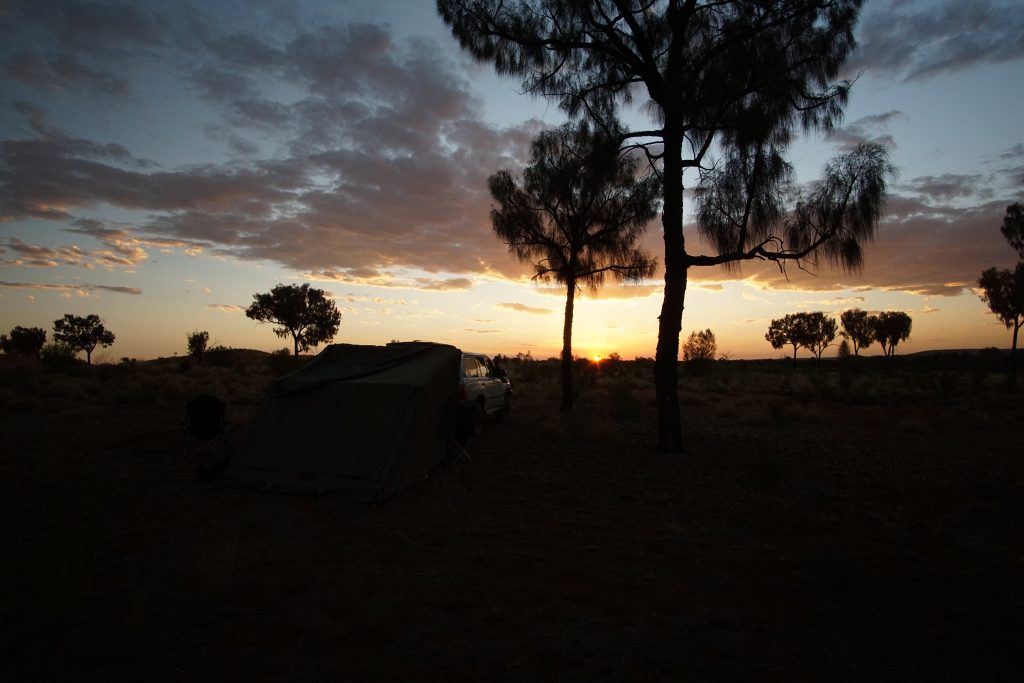