So, after a few weeks at home. Normal life stuff. Dogs back mended, or at least back to being grumpy old men. Plenty done to the Cruiser as well, some stuff like the suspension and exhaust needed doing. Some other bits, well you just never stop learning or thinking of ways to improve your touring set up.

Anyway, on the flip side you can keep tinkering for ever. Sometimes you just have to pick a date and go. So back on the road it was. 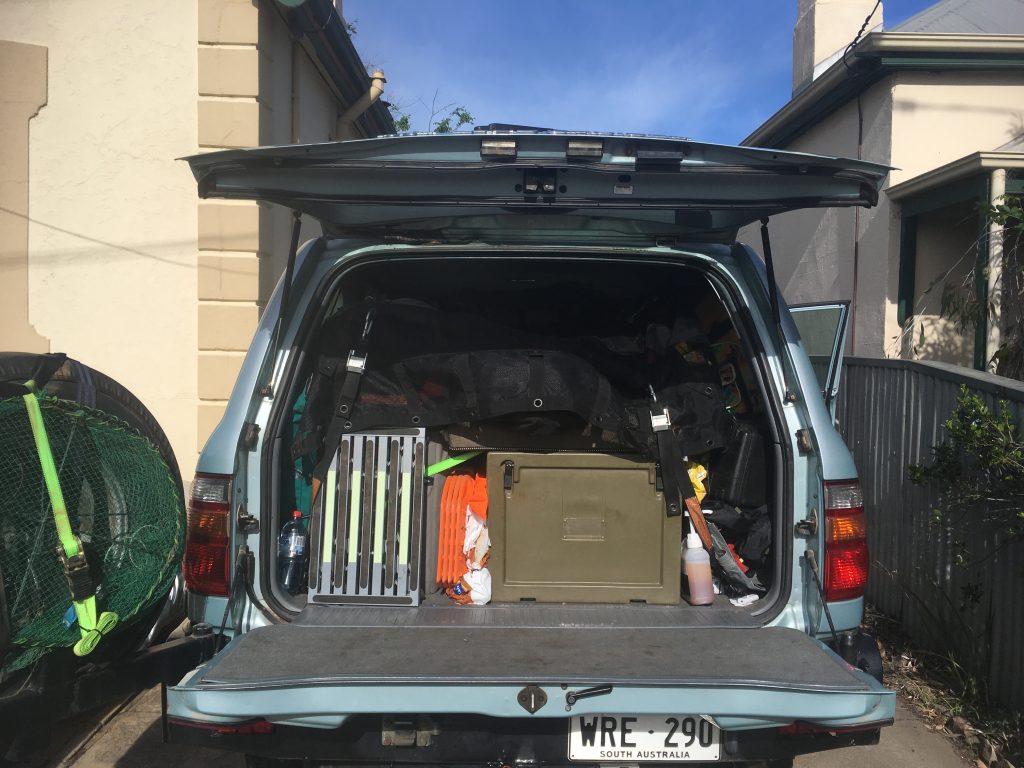 We had a rough plan to head down to the south east corner of South Australia. N wanted to see the sinkholes and sunken gardens in Mount Gambier. So we would start there and just play it by ear.

‘Not all those who wander are lost’ as the cliche goes. (JR Tolkien)

So, whilst I normally try to get as much of a journey, out of the journey as possible. This time I just decided to bolt a few hours down the highway, to get to some more unfamiliar country. We peeled off at Bordertown, not actually on the border with Victoria despite the name. Originally set up to transport gold from the Victorian goldfields to Adelaide, it was established as close to the border as practical for a town.

From here we were now on a mixture of farm tracks, country roads and what must have been the service road for the train line that ran from Naracoorte to the small township of Wolseley. The train line, now abandoned, is a different gauge to what is now used in Australia. 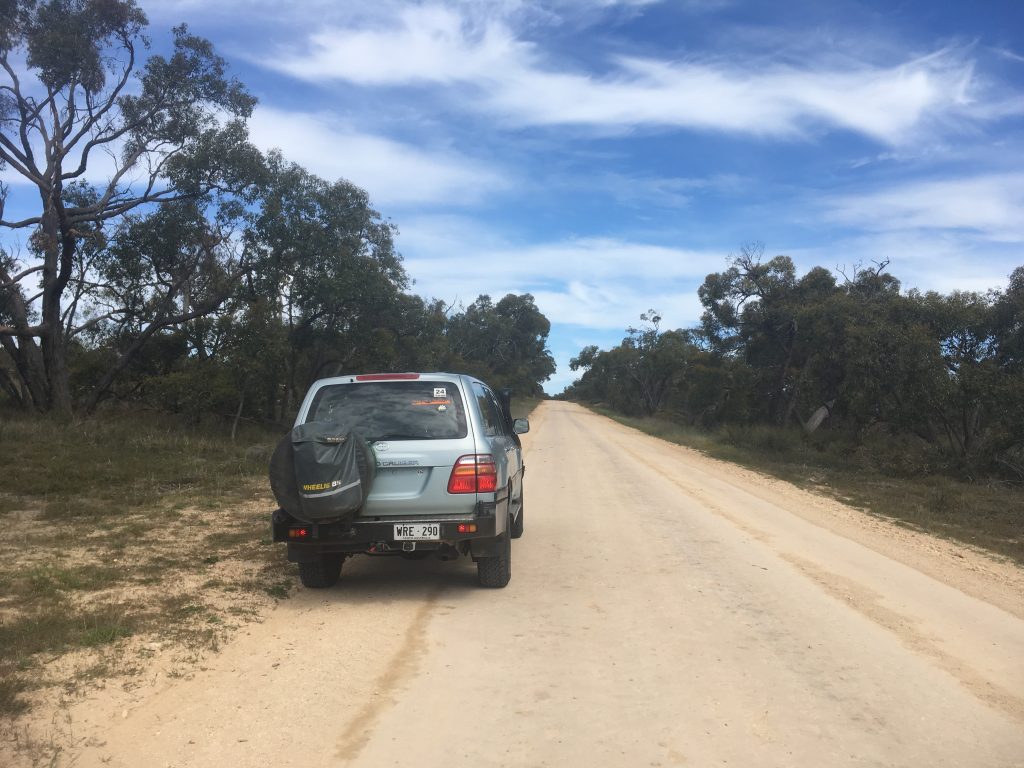 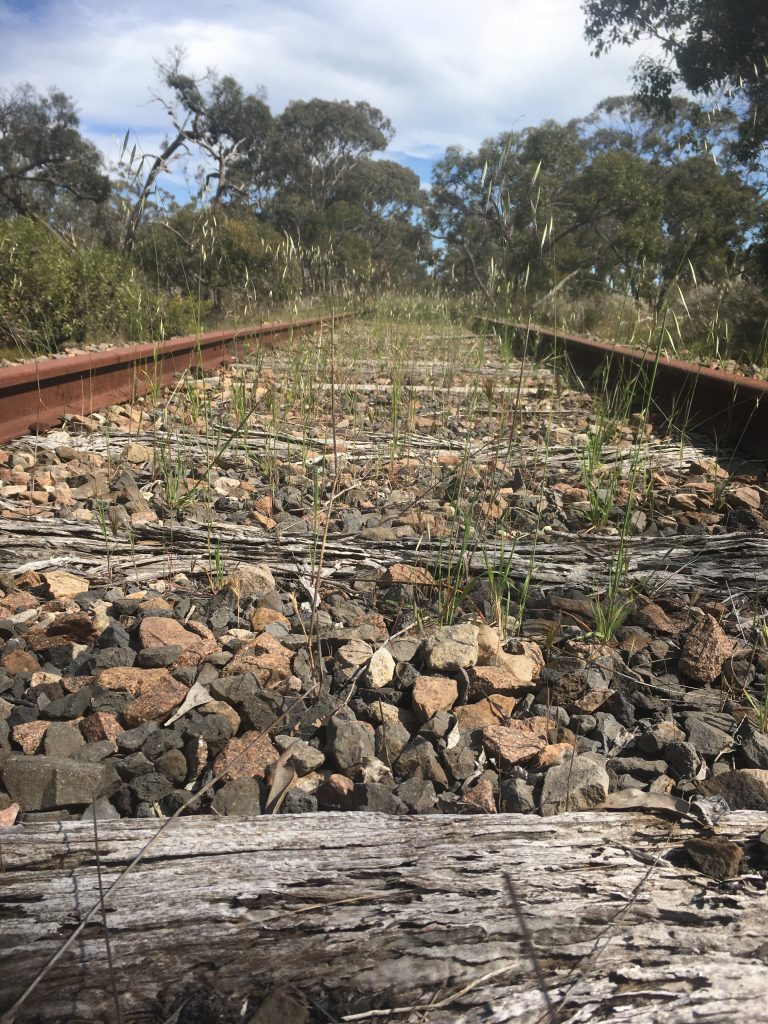 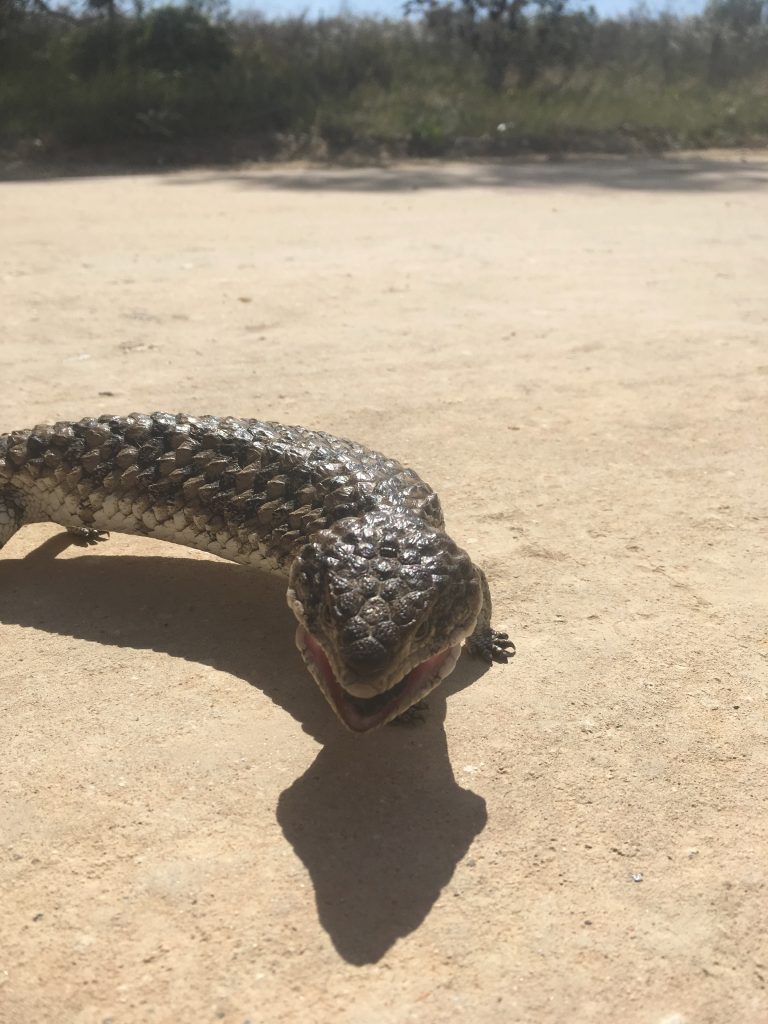 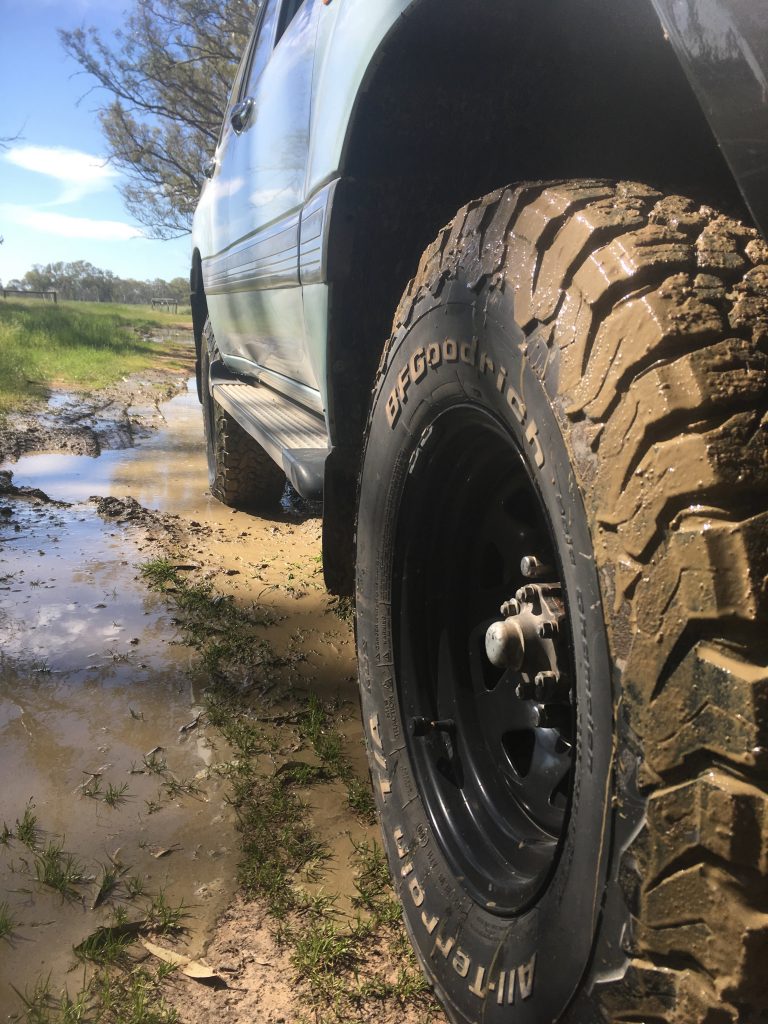 We were heading for Mullinger Swamp, a conservation park on the border. Not sure exactly what we were going to get, but the swamp itself was impressive.

A natural swamp, it has been a place of recreation for many years. We had it to ourselves that night. Peaceful, well except for the ‘zombie’ sheep in the adjacent farm, whose weird low moaning kept us awake a good deal of the night. N seemed to think they were communicating with sheep in the neighbouring farm, or maybe this is how the zombie apocalypse starts… Anyway, I hadn’t heard sheep doing that before.

Still, good day to start our trip again with.

Next day we trundled down some more dirt roads to Mount Gambier. South Australia’s second biggest town. N wanted to see some of the sunken gardens, so we just did some normal tourist things. 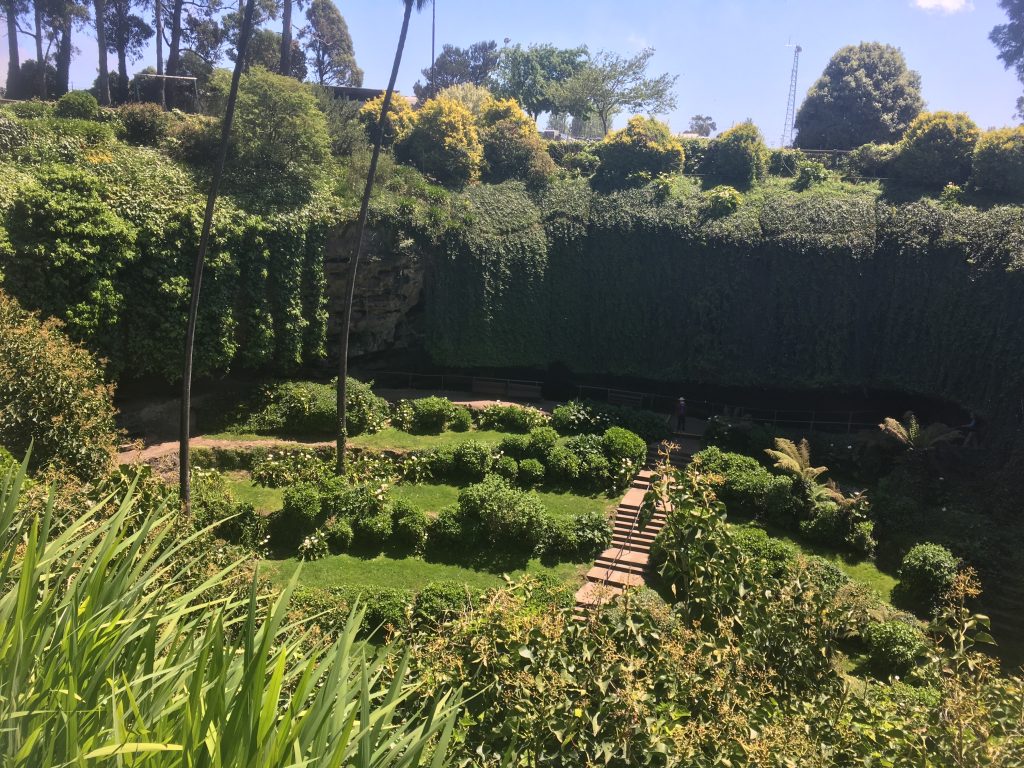 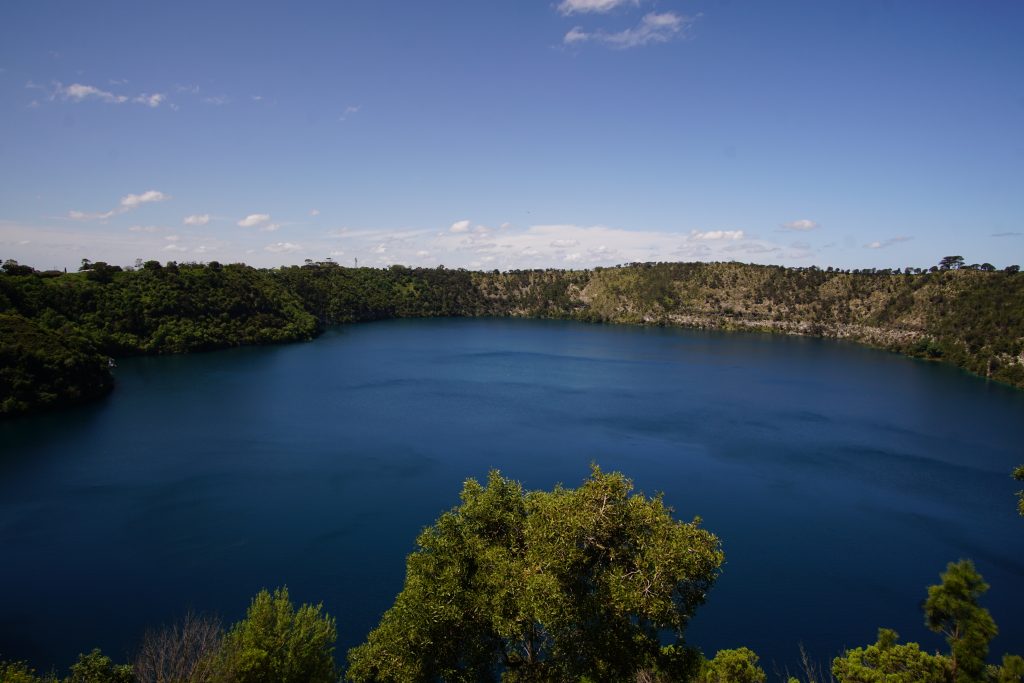 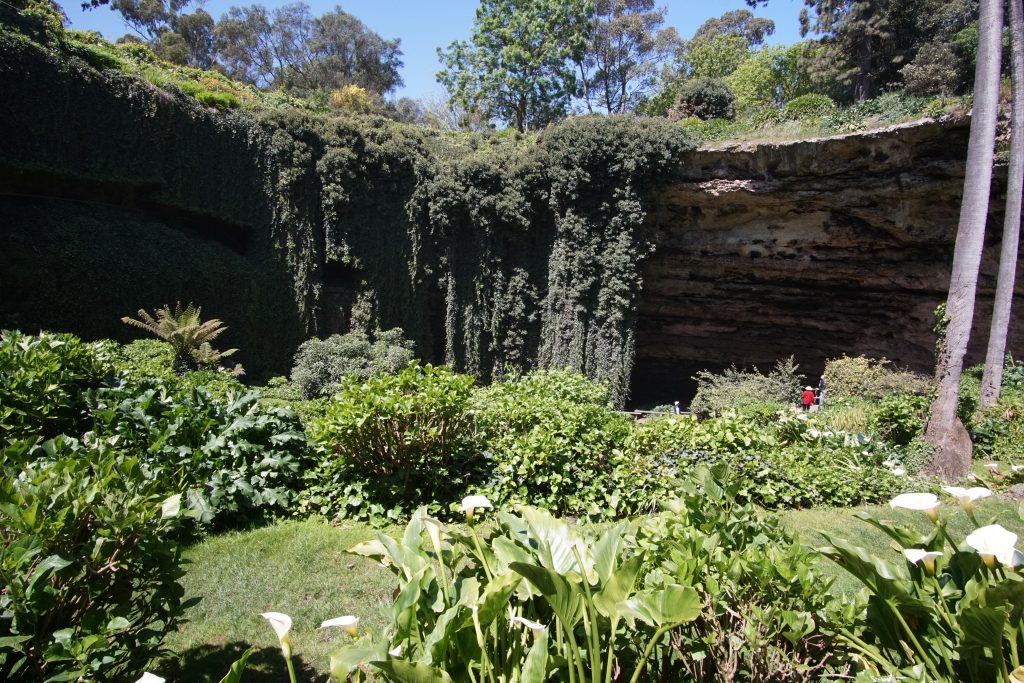 We headed out to try and find some more sinkholes in the bush. Despite being in the right area according to the vague tourist map, I couldn’t find Hell’s Hole. We drove on through the timber plantations (timber is one of the main industries in this part of the world) to take up another campsite, again on the border and this time on the banks of the Glenelg River. The camping was just down a little dirt road leading to some fishing shacks. We shared it with some brothers from Ireland traveling around, and a foreign couple who didn’t say much. Although they understood my gesticulations when they drove off in the morning with a pair of shoes on the roof of the car!

A couple of different sets of locals turned up around sundown, and headed out to fish. They were gone by morning, so I’m guessing nighttime is the most productive for fishing there. 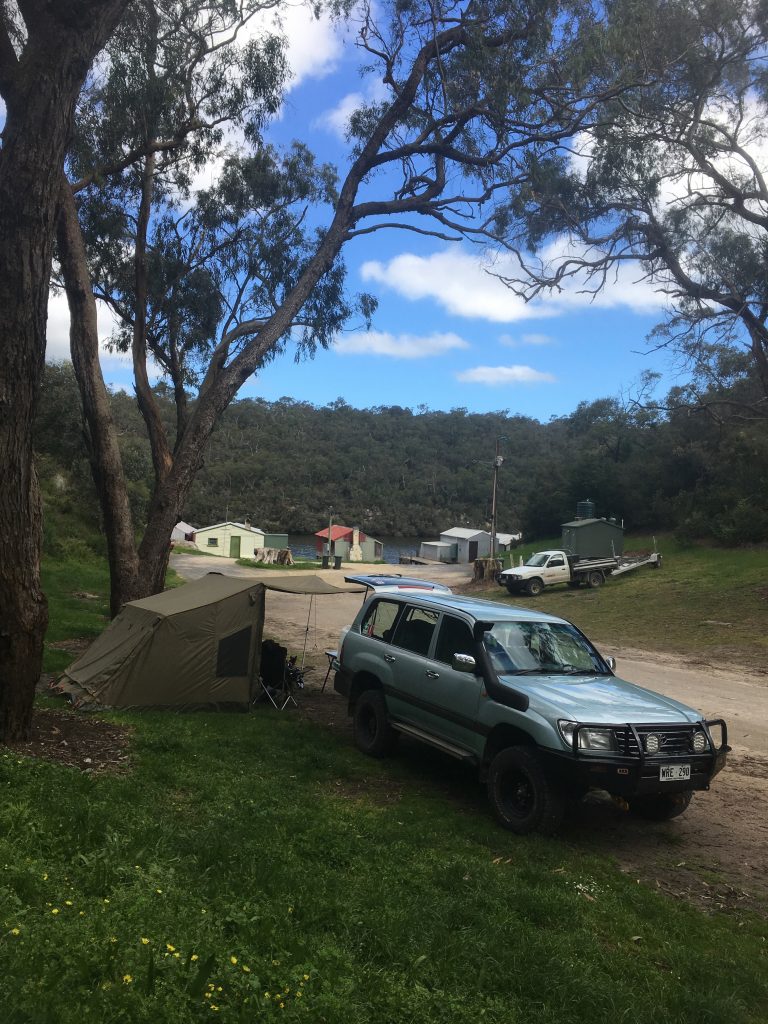 Next morning we backtracked into SA, down along the coast to Port Macdonnell – ‘the largest rock lobster fishing port in South Australia. A somewhat thriving little town because it still has a relevant industry, unlike so many country small ports and towns.

We stopped at Feast’s Museum, and eccentric and eclectic collection of mostly cars and model cars. Well mostly Chrysler Valiants to be honest, but there is probably something for everyone somewhere in there, and most definitely worth the ten bucks to get in. Old mate is a good character too. 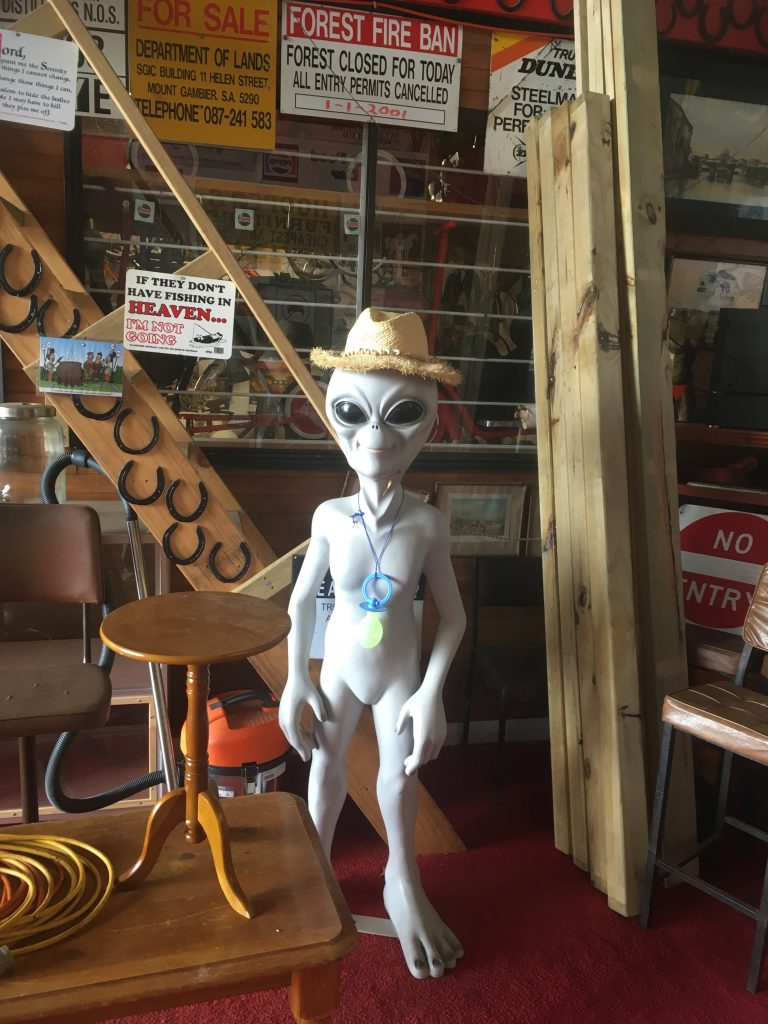 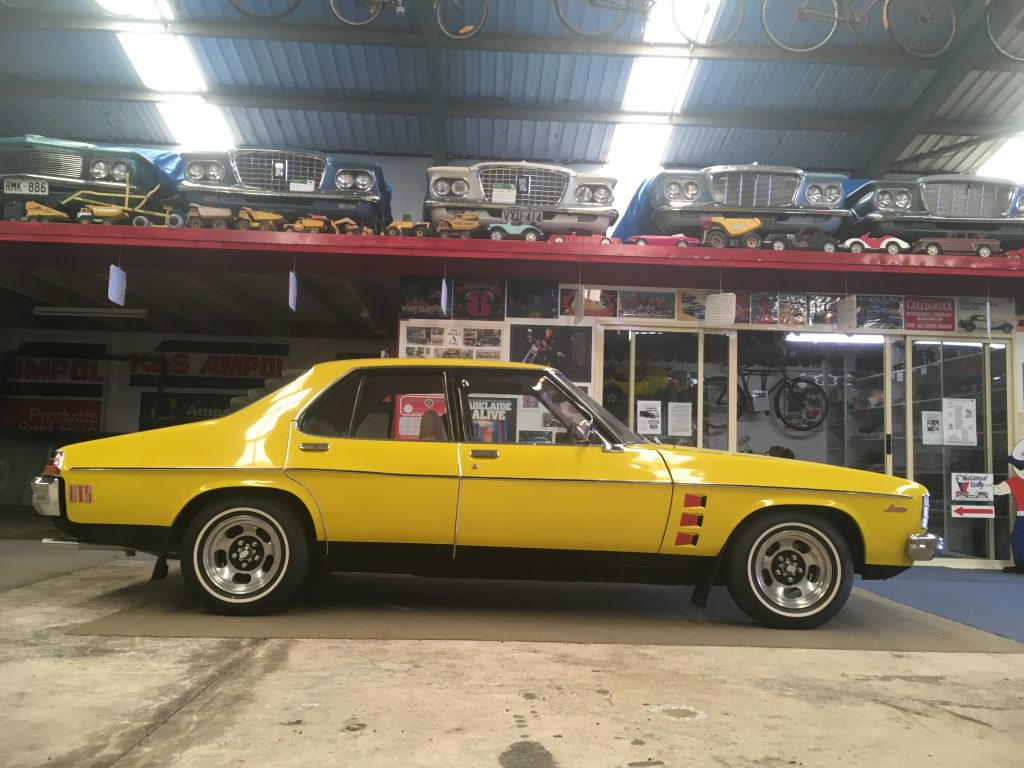 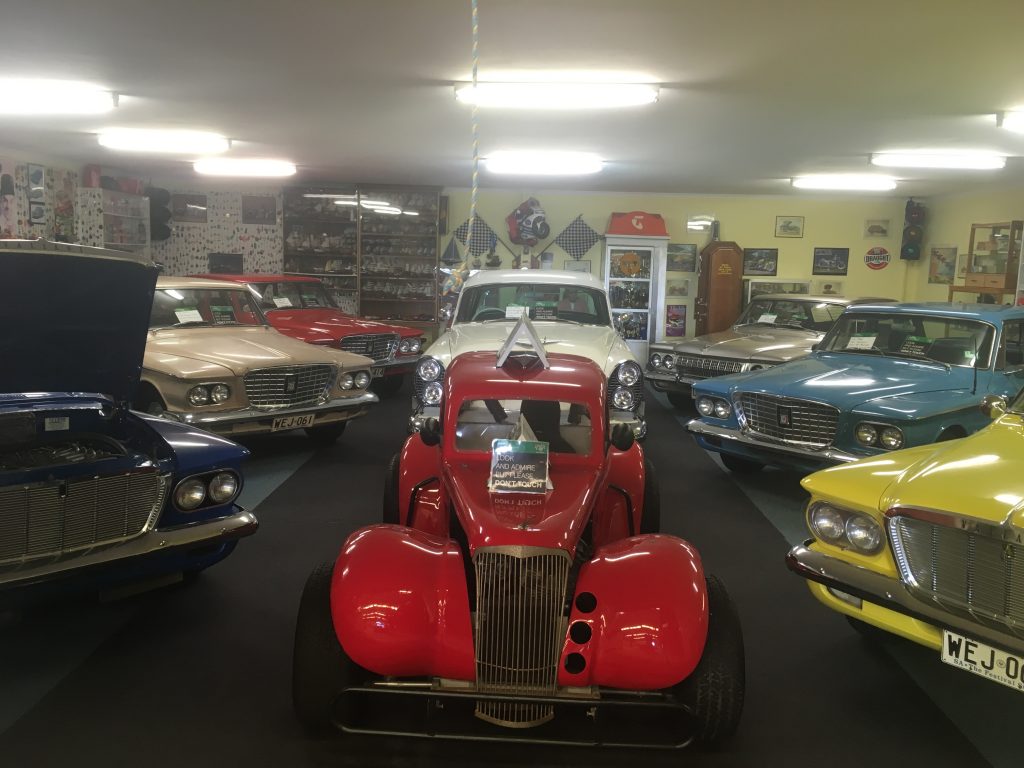 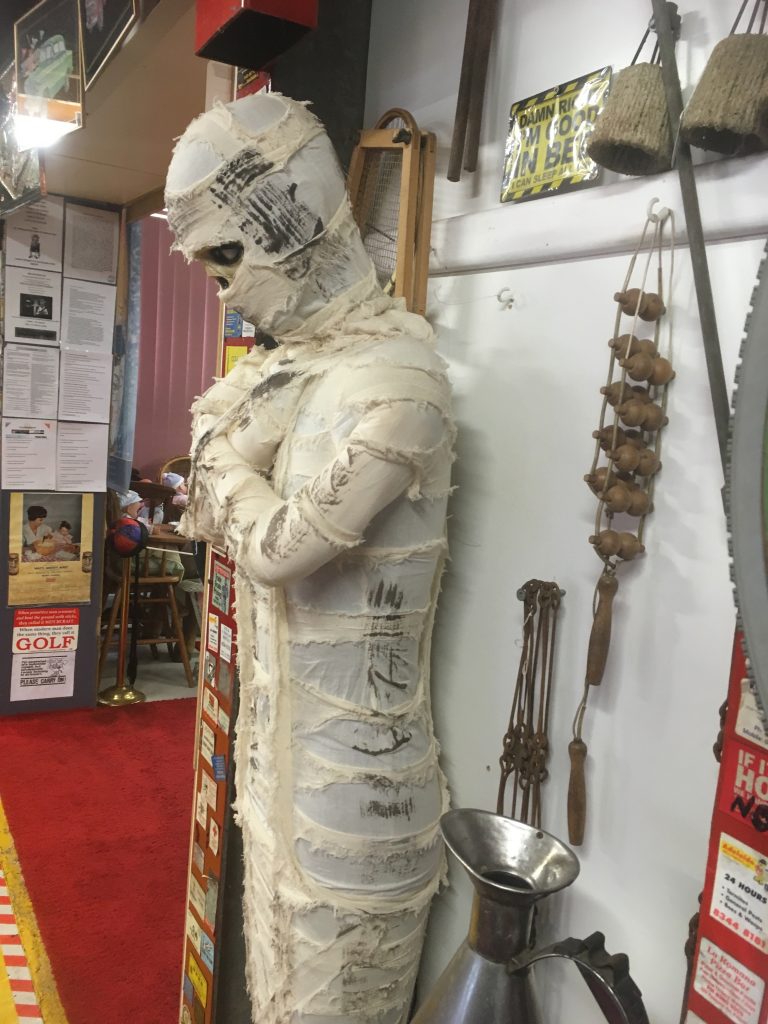 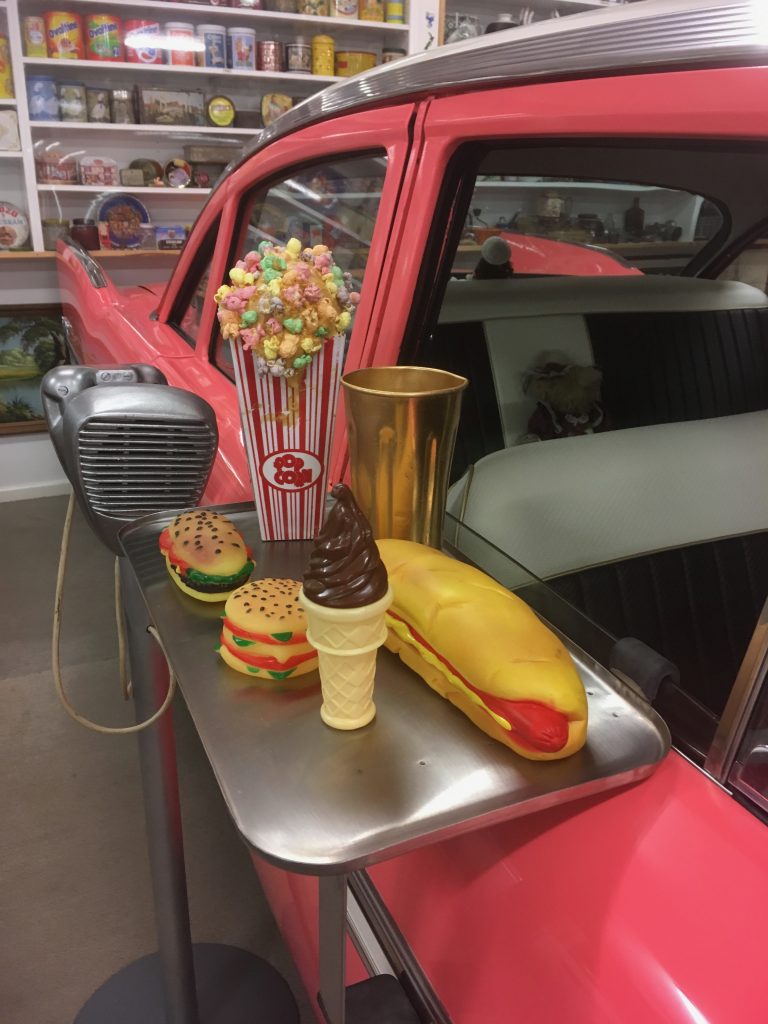 Next stop was Ewen Ponds. Similar to the nearby Piccaninie Ponds, which I had visited before, these are a series of Limestone Sinkholes, notable for the amazing clarity and clearness of the water.

You can easily see plants at the bottom of the pond. Not to mention they support some unique wildlife, including Lampreys! The ponds are normally open for snorkelling and diving but are currently shut for rehabilitation, not surprising considering there seems to be no permit or control system. Amazing considering some of the hoops you have to jump through to access other wild parts of the state…

We made our way back up through the logging country, still on the hunt for sinkholes. We found one! 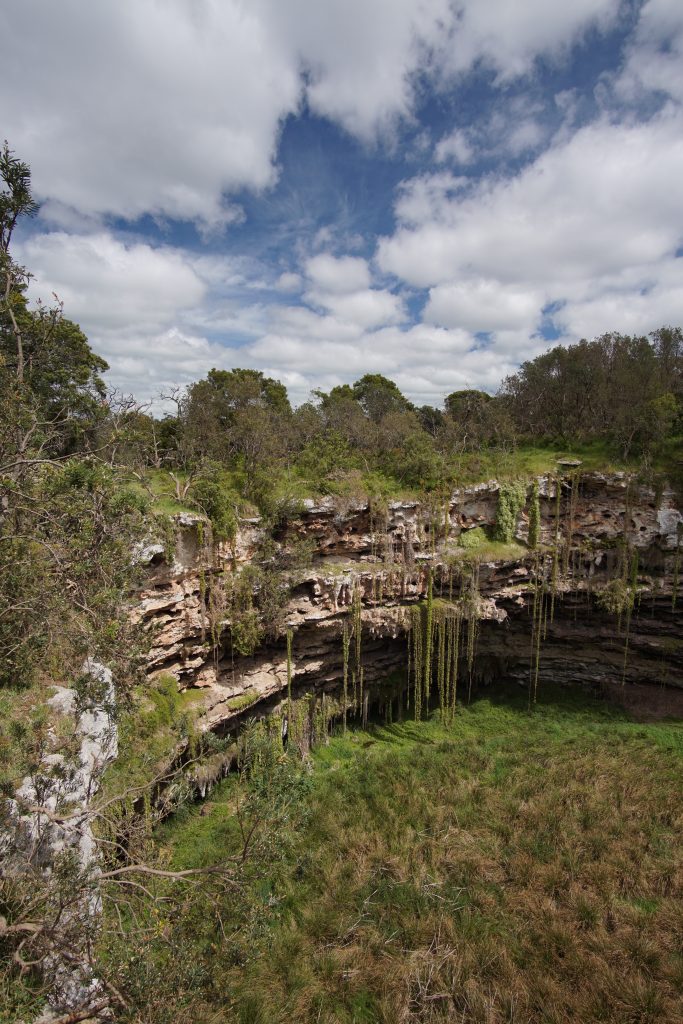 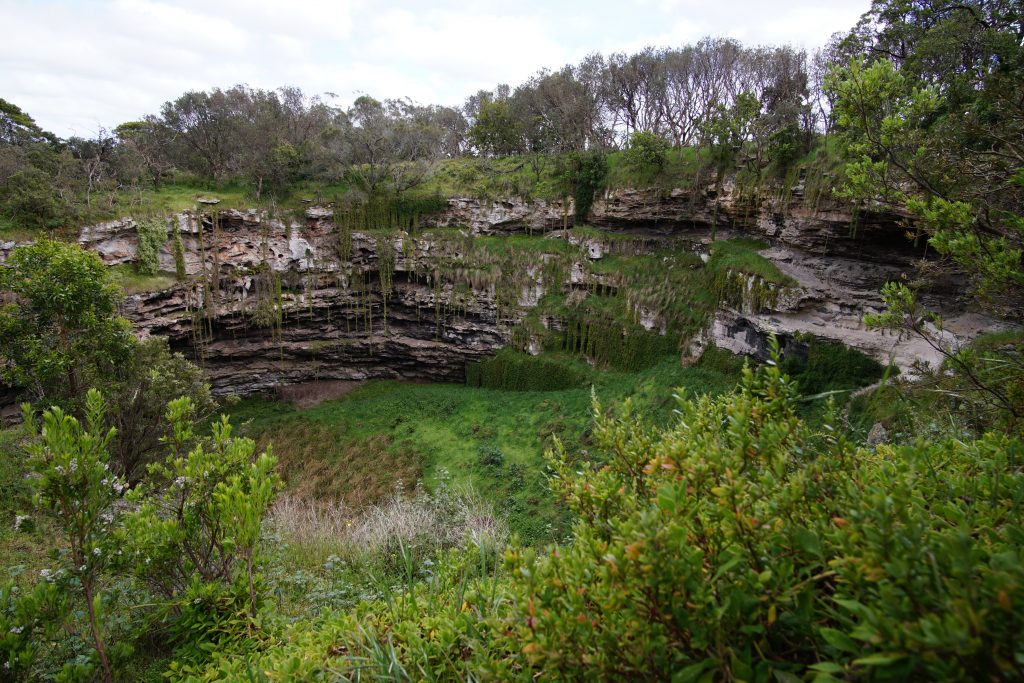 Again no signage to get you there. I don’t think the timber companies really want visitors to the area. We redirected another couple who had driven past the turn off. I tried several tracks in the area Hells Hole is meant to be, including some through the native vegetation parts of the area, which unlike the logging roads kind of meandered off into the bush and clearly didn’t get driven much “Do we have enough fuel to get lost?”said N, “yeah babe, lost for days” she loves it when I just wander around, off any map… 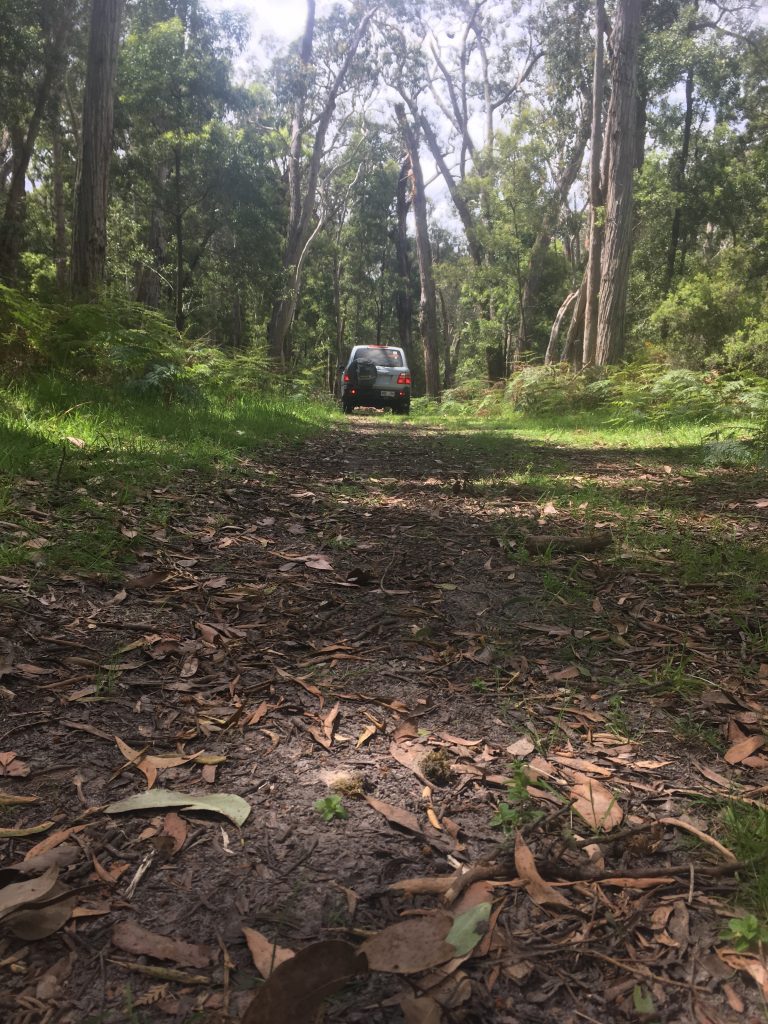 In the end I admitted defeat. For now… Time to move on.

We crossed over into Victoria proper. We made tracks up through more timber country. Stopping to collect a few pine cones for ease of lighting fires along the way. 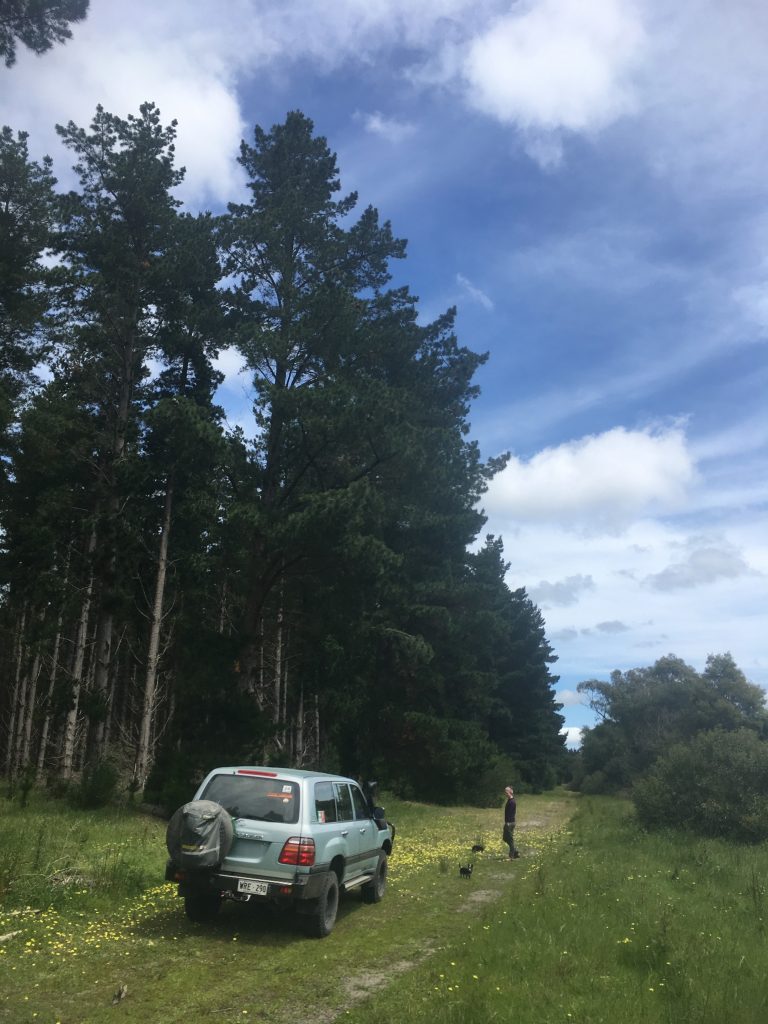 Not much traffic out here, but I spot something up ahead.

I slow right down as I can see a dog running in the road an someone by the side of the road. The dog is going mental and looks a bit crazy, continually barking and running in front of the Land Cruiser’s front wheel… The guy standing by the side of the road is about middle aged, and has a walking frame. He is looking a little disheveled and dirty like he might have fallen over. A quick scan round the general scene, whilst still trying not to run the nutter dog over I stop and wind down the passenger window to talk “everything alright mate?”. So, it transpires that Geoff would like us to go to his parents house and ask them to come and pick him up. Geoff has a few issues and so can’t quite tell us where his house is, just it’s “in the bush and a fair way up this road”. To be honest if the Cruiser wasn’t strictly a two seater in touring mode and a I could have secured Geoff’s crazy dog and walker, I would have just driven him home (although with hindsight, that probably just would have got everyone lost). Anyway, we checked he was good for water and got as much information out of him as we could – not overly easy. We drove on slowly looking for any sign of properties. After about a kilometre we got to the end of the logging track and to a minor bitumen road. BEEP BEEP! Went one of our phones and a delayed text message urgently made itself known. Ok, we’re back in service we said in unison. Having seen no houses, and not being able to see any now, apart from a farm very far off in the distance that didn’t appear to have any access from here. N tried to google some of the information Geoff had given us – his full name, his parents name, the name of the house. Whilst I tried looking for the nearest police station. Aaannndd then our phones stopped working. We drove back 100m to the place they had first come to life which seemed to be the only pocket of service around.

No luck with the googling. I called the nearest police station, which diverted to Portland, about 100km away. Apparently the original station I called is currently unmanned. Anyway, I explained the situation to Ken the policeman. A bit of back and forth as we got a grip on each others situation, the long and short of it, is there wasn’t a cop for 100km (interesting…). Ken tried to find out what he could on the special police super computer network (google), and a couple of times suggested we head back to Geoff and hand the phone over, each time I had to reassure Ken that there was definitely no phone reception there, we barely had it here.

Anyway, I said I’d do what I could to sort it out, and would let him know either way.

We drive on up the bitumen road a bit, soon coming to a small house. We pulled in, I knocked on the door and a young Mum and her little boy answered – luckily I’d parked the Cruiser so she could see N and Rollo was sticking his head out looking cute to boot. Anyway, she didn’t seem bothered and invited me in when I explained the situation. A couple of calls to neighbours and she was soon through to Geoff’s house and speaking to his parents and then Geoff who had made it back home safely.

Apparently he walks that road everyday. Anyway, a quick call to my new mate Ken once we were back out on the road, we pressed on with a clear consciences.

We arrived at the small village of Dartmoor. Plenty of free camping here, we left the main area to the ‘vans and motorhomes and found spot on our own down a side track on the riverbank. Although where we ended up was about 100m from our original site, after a ‘piece of wood’ ended up being two ducks sheltering their young in the grass. As I got close they flew off and pretended to be wounded to distract us from the two ducklings hidden in the grass. The ducklings looked quite old, and I was glad the entire family had moved on when I went back for a quiet look sometime later after we, very gingerly, drove on a bit further. 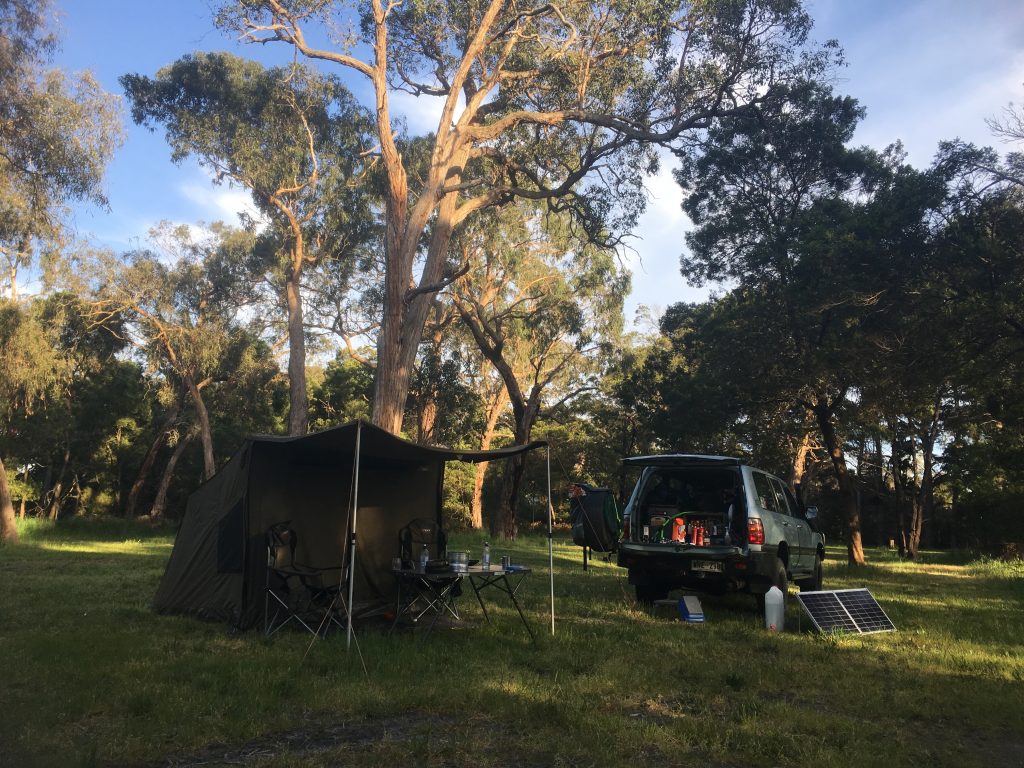 We stayed down by the river for a couple of days. Set up the shower. Did some exercise. I tried fishing for yabbies with no success. We watched a couple of locals digging up the worms that live in the mud, must make good bait. Had a wander around the village. 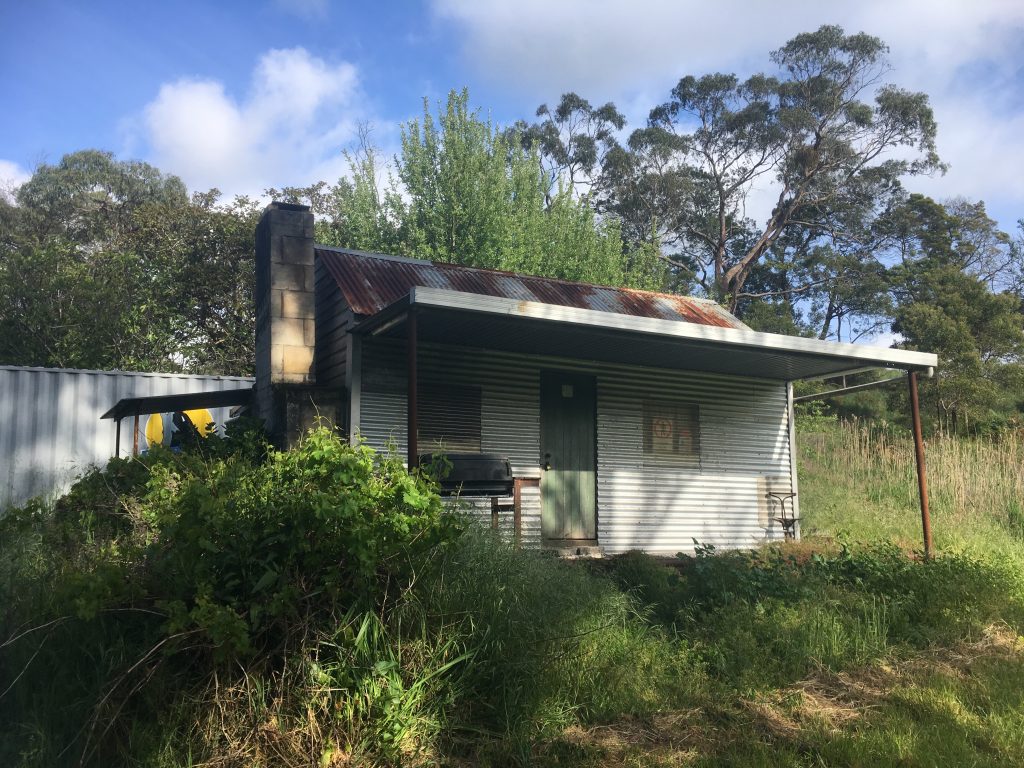 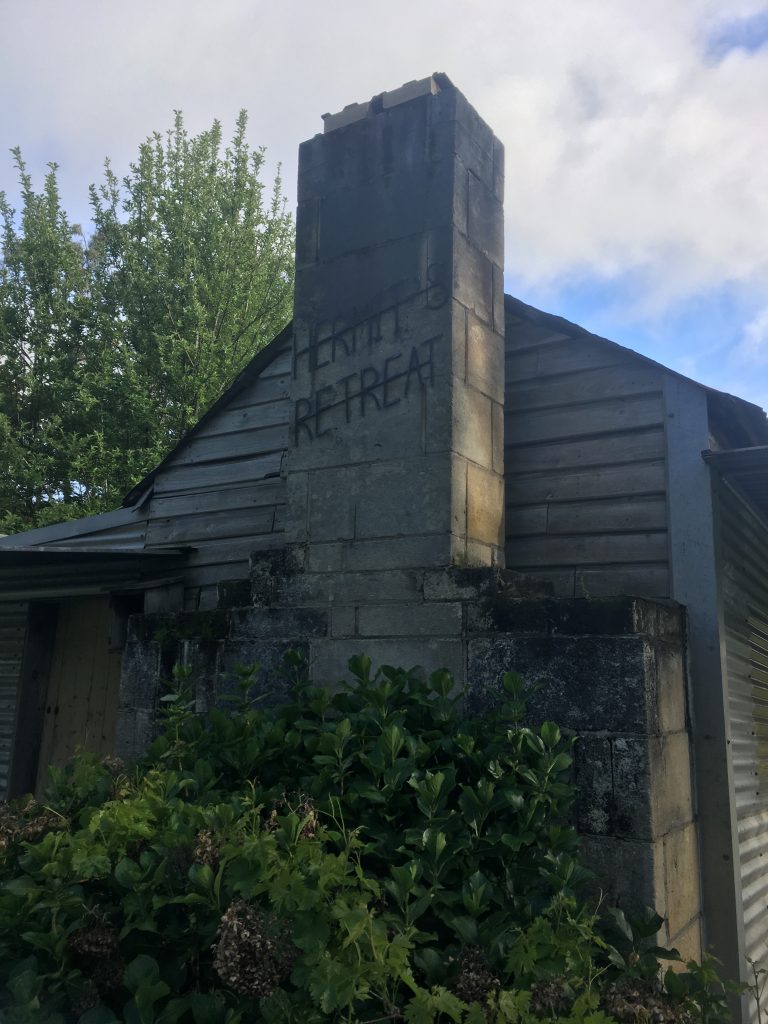 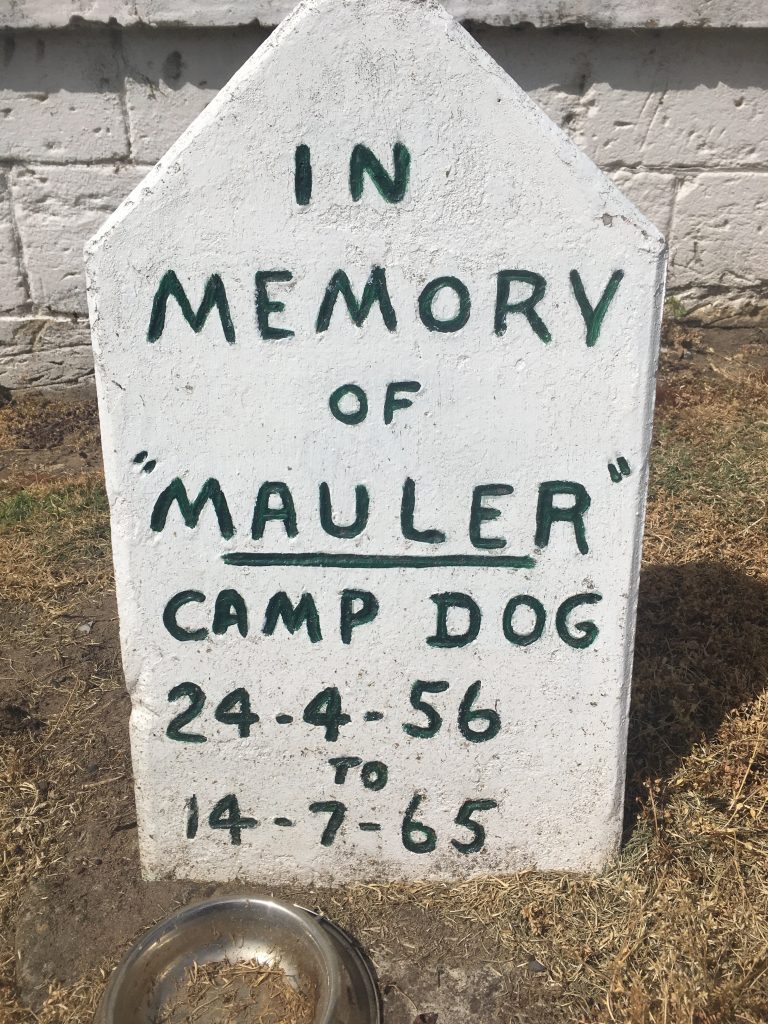 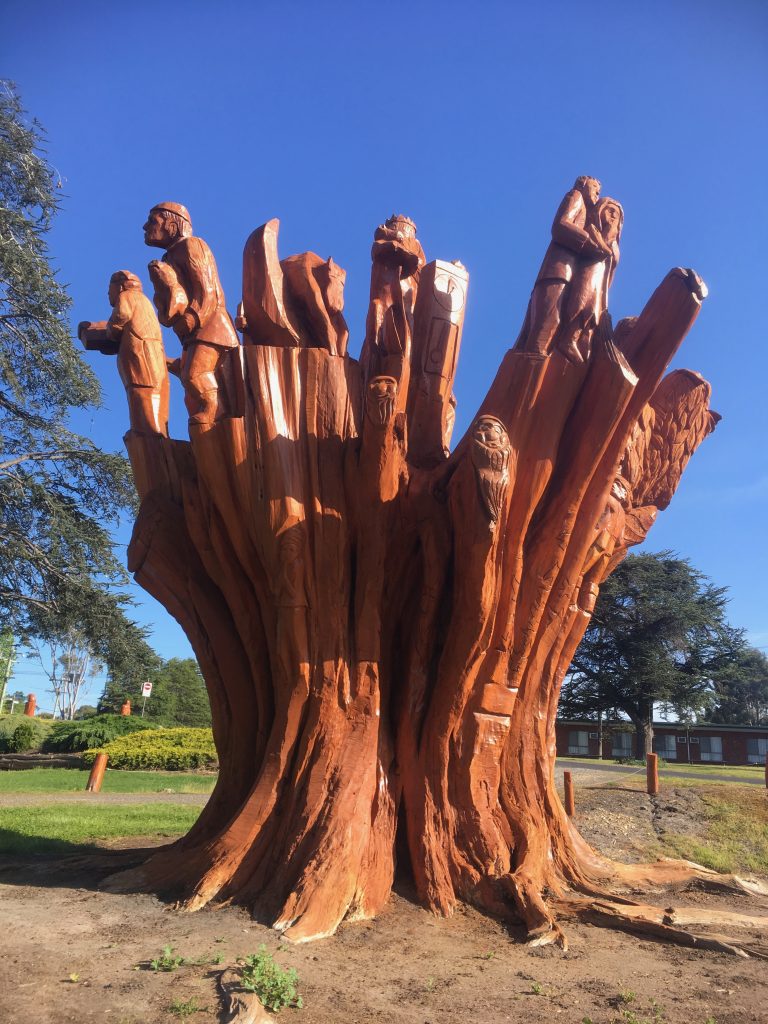 Time came to press on. We drove north east, as we would do for the next week or so, as we made our way slowly up towards northern New South Wales, for the final round of the World Rally Championship, happening in mid November, around the town of Coffs Harbour.

Through the attractive country town of Hamilton. Which seemed to mark the border between the lush and green south (seriously greener than any other part of Australia we have been to – N started looking at house prices…!) and the drier country further north. 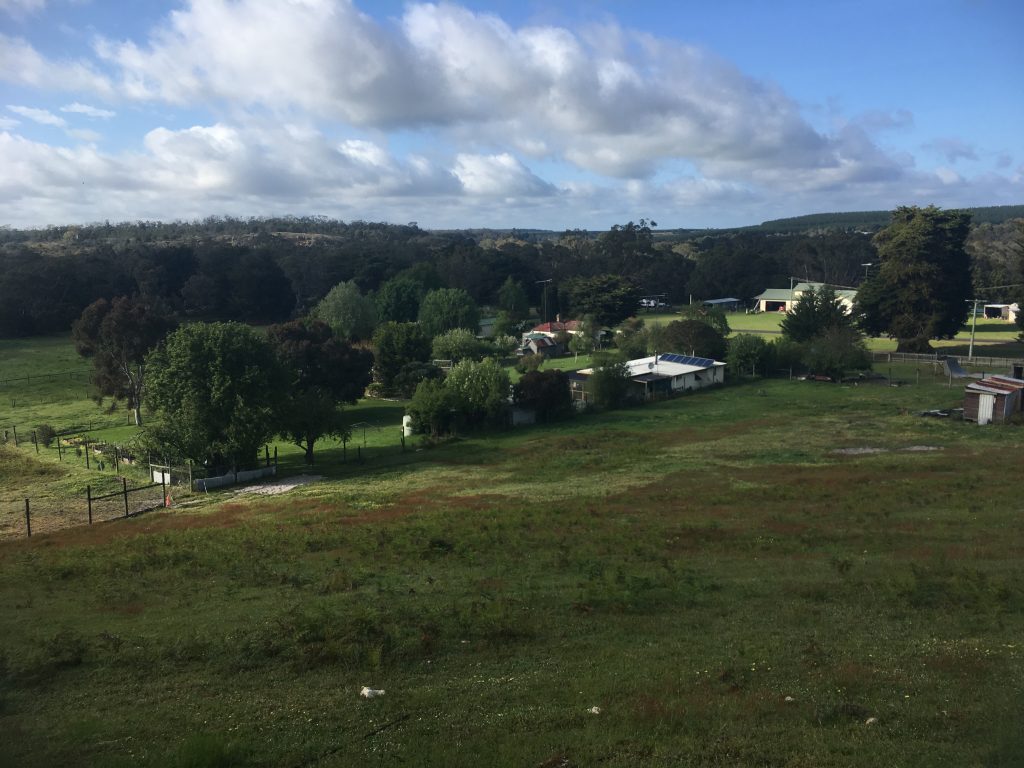 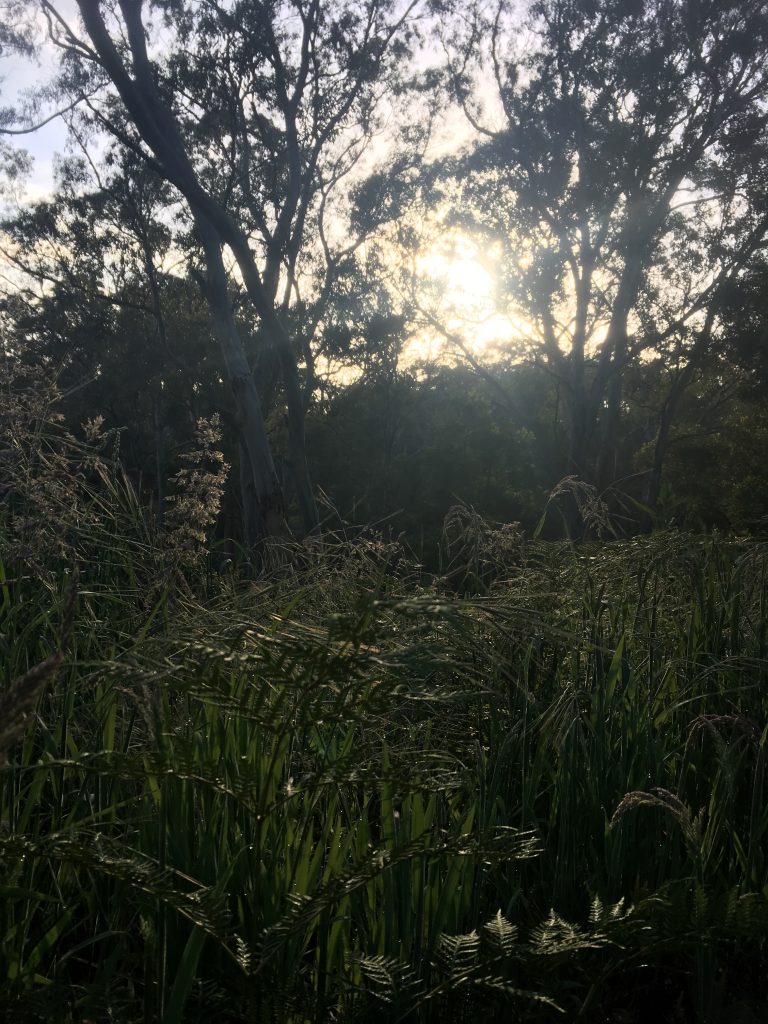