Refreshed, we headed out. A couple of waterfalls are easily accessible from the main road. Not much in them at the moment, but still some good views. 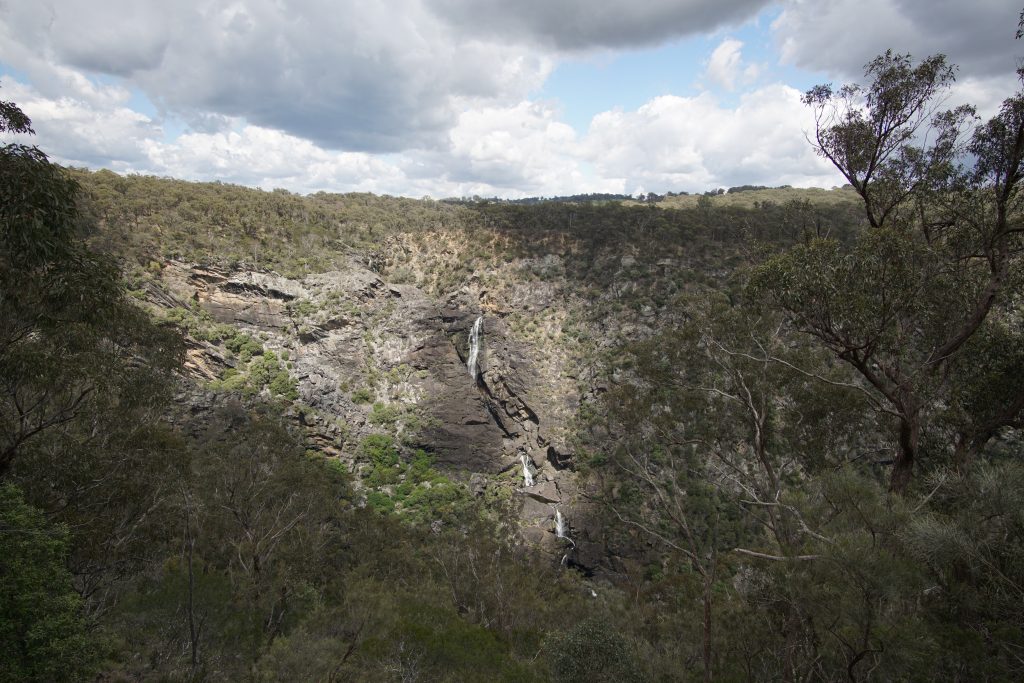 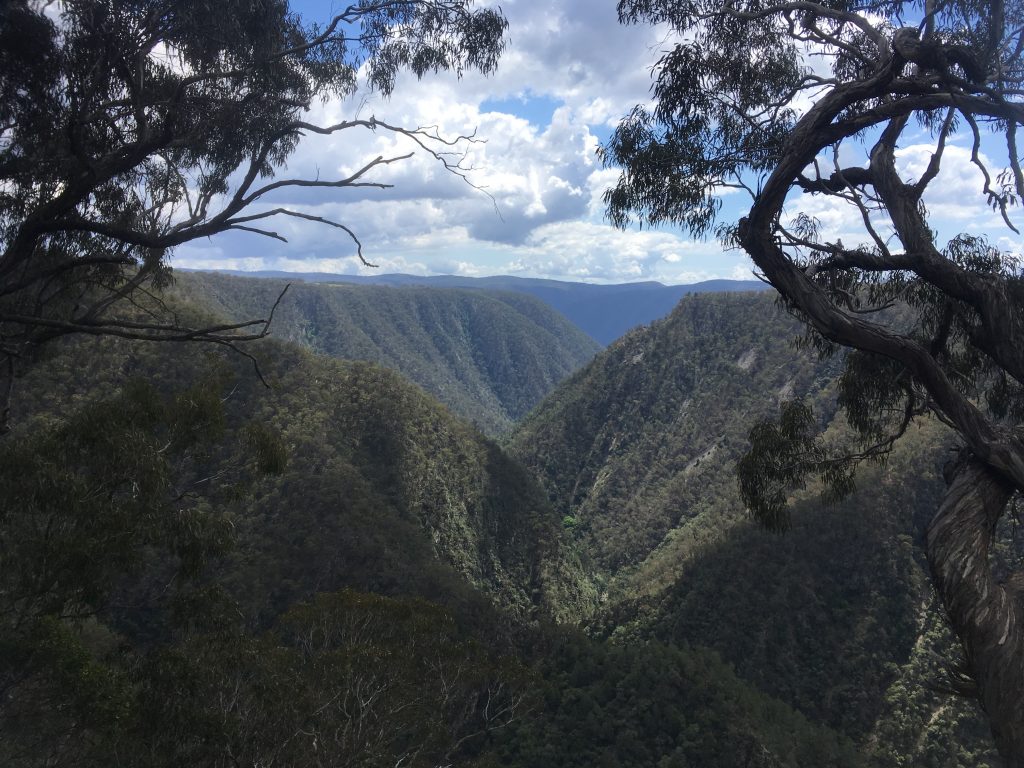 Back on the dirt, we head up through very pretty farming country, approximately north-east. 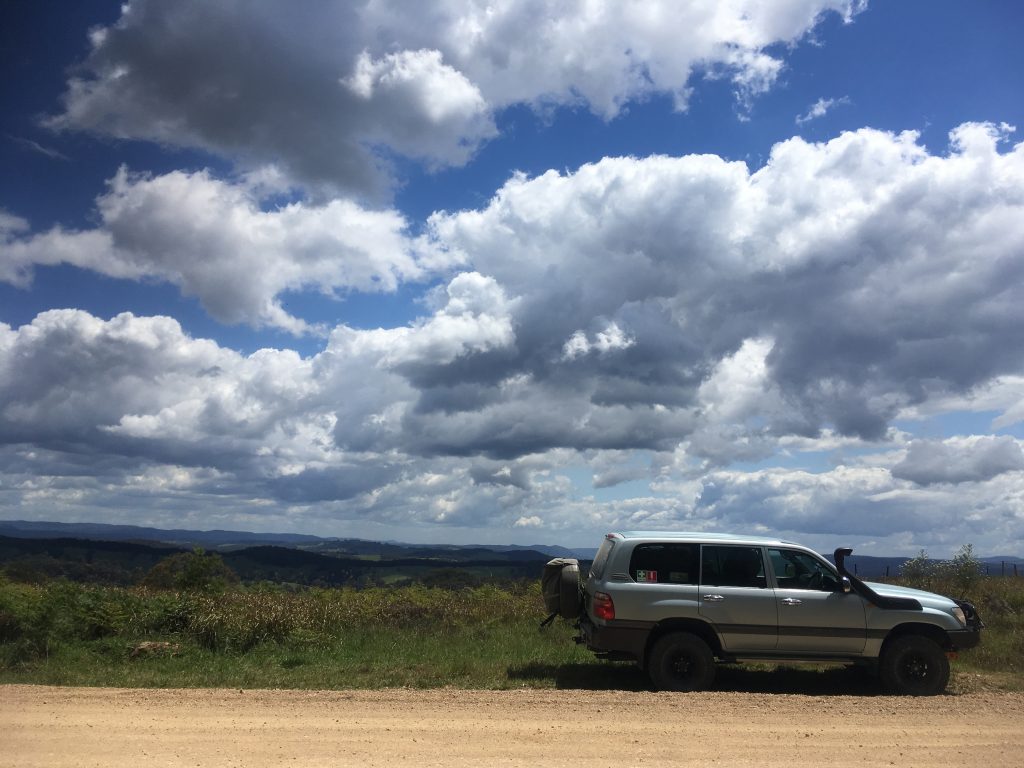 We headed into Oxley Wild Rivers National Park (named after John Oxley, an explorer who passed through this region in 1818), hoping that the route we could see on the map actually would give us access through.

Soon after crossing into the park I noticed a ADV Moto (expedition equipped dirt biker) rider in my mirrors. I pulled over to let him and his buddy by. We saw them again briefly at the picnic area, and we pressed on ahead of them here. Luckily the trail we wanted to take was open, although a ‘dry road only’ well it was dry… 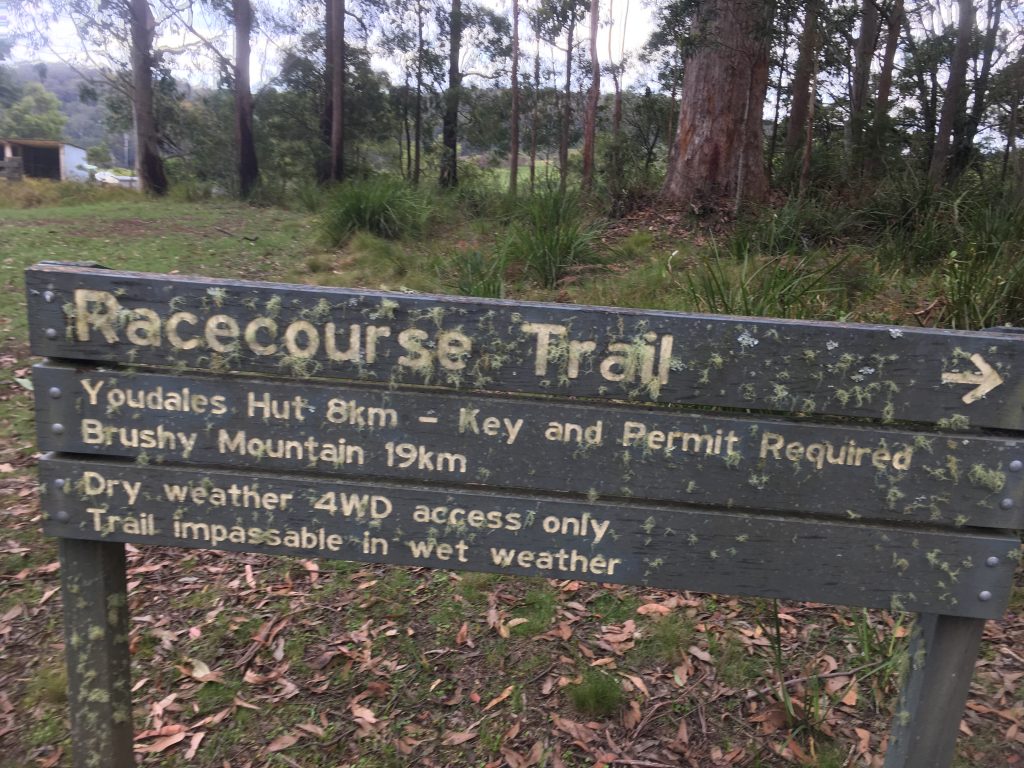 Not far down this trail we met more ADV riders heading towards us. At first I thought they must be different guys, then I realised they must have taken the ‘No Public Access’ Ranger trail out of the picnic area. Again I pulled over, this time they stopped. They were lost and wanted to know where the trail went. They were navigating using the standard navigation app on their smart phones. I asked them where they had come from, they didn’t know and asked them where they wanted to go – “we’d like to get to Dorrigo, but all off-road” “almost certainly impossible” I said “just because you can see it on the map, doesn’t mean it’s accessible” I showed them were they were, explained that the ‘GPS’ on their smart phones will not work very well out here, and recommended they follow this trail back to the highway “yeah, we’re pretty low on fuel as we didn’t fill our sub tanks right up at the last fuel stop”. They definitely had enough gear to look like they should know what they were doing, but clearly not much experience of navigating in the bush.

I normally have utmost respect for my two-wheeled brothers and sisters, but these guys plus some others that I nearly hit the next day as I (slowly) went round I blind dirt road corner, only to find them coming the other way on my side of the road so they could take a better ‘line’ into the bend to carry more speed… Would have ruined everyones day if I had been trucking along like a lot of the locals do round these parts. Anyway, it’s not like the moto guys have the monopoly on dickheads.

From here, we were alone. Pretty trails. 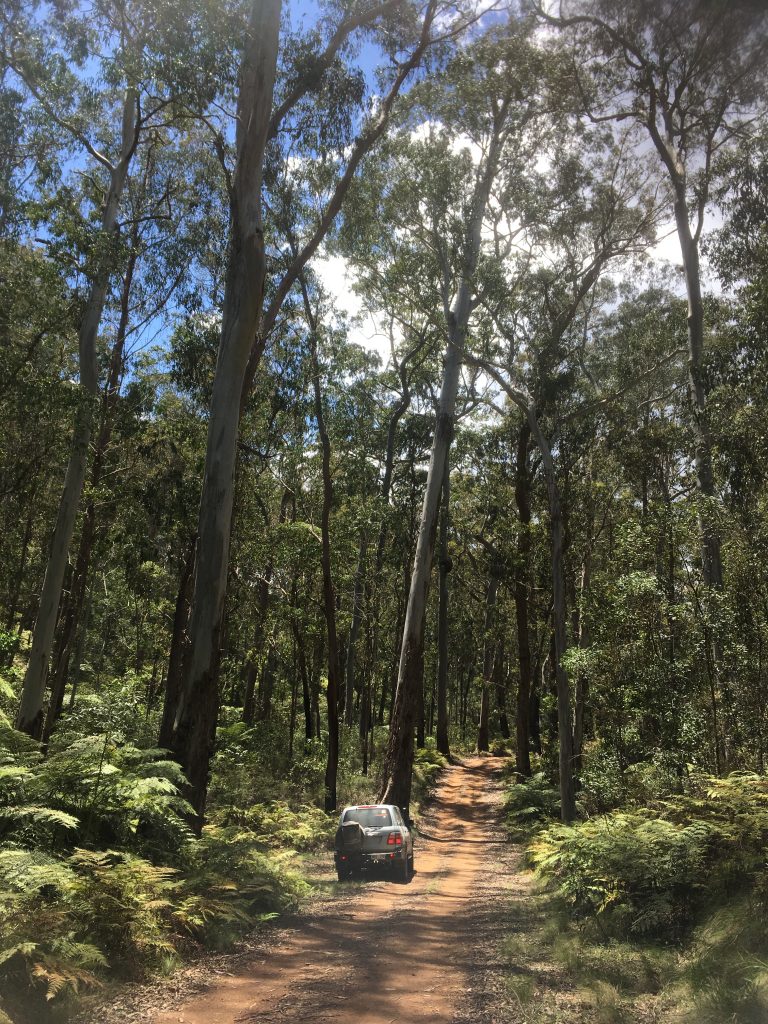 A few kms from the end of the trail, the rain started. 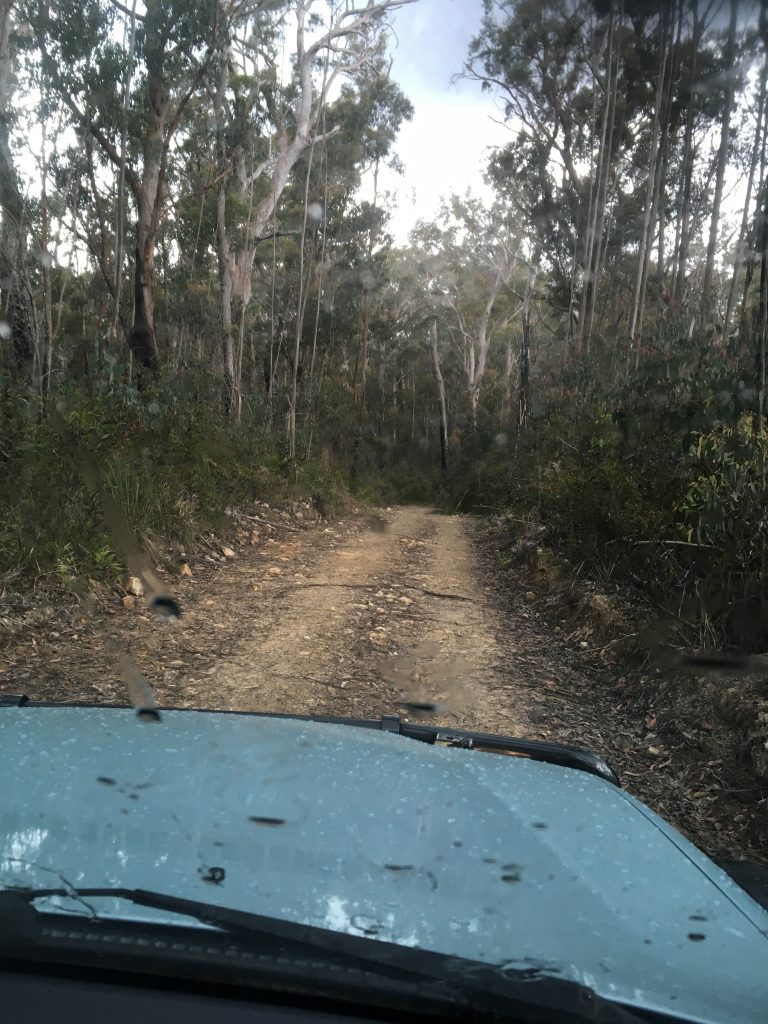 When the rain comes it doesn’t muck about. Creek crossings we had been doing dry all day suddenly had half a metre of water in them. 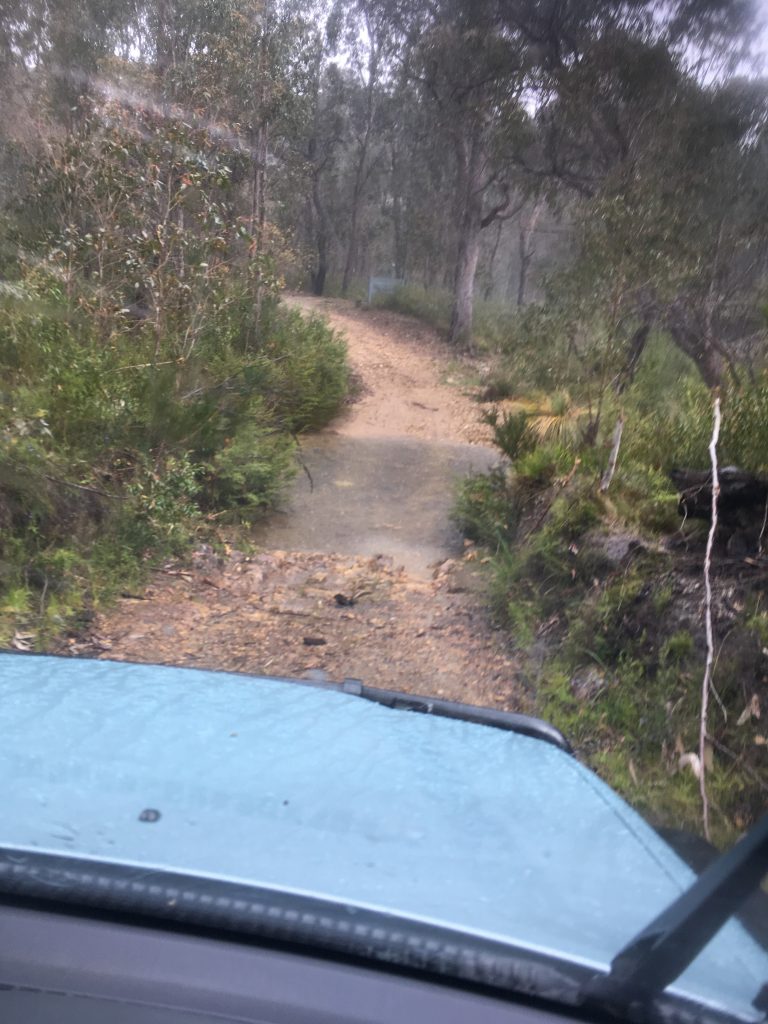 Luckily the heavy canopy kept the track surface from getting too greasy before we got down the last few hills. I made sure we didn’t rush, but I was glad when the trail became flatter and a bit more substantial. I didn’t fancy having 3 tonne of Land Cruiser (not to mention our current home) sliding down a muddy slope.

The rain continued to be on and off for there rest of the day. Sporadic, but heavy when it did come. We popped out on the other side of the range, more like proper rainforest on this side. The clouds must break here coming in from the coast and dump most of the rain on this side. 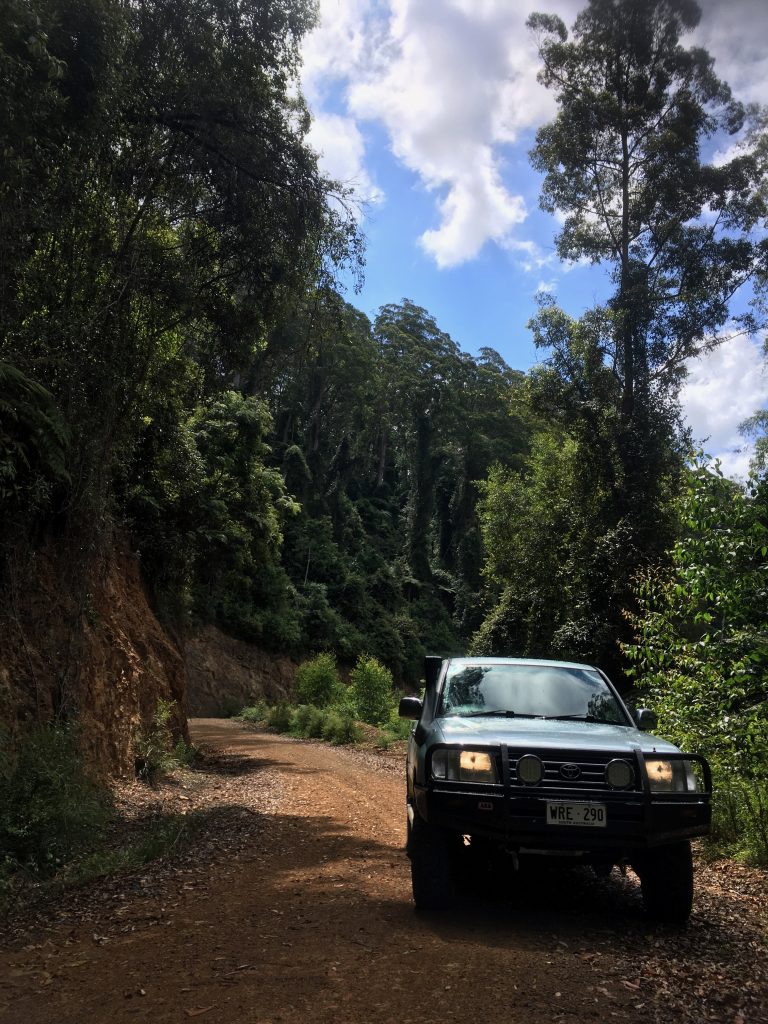 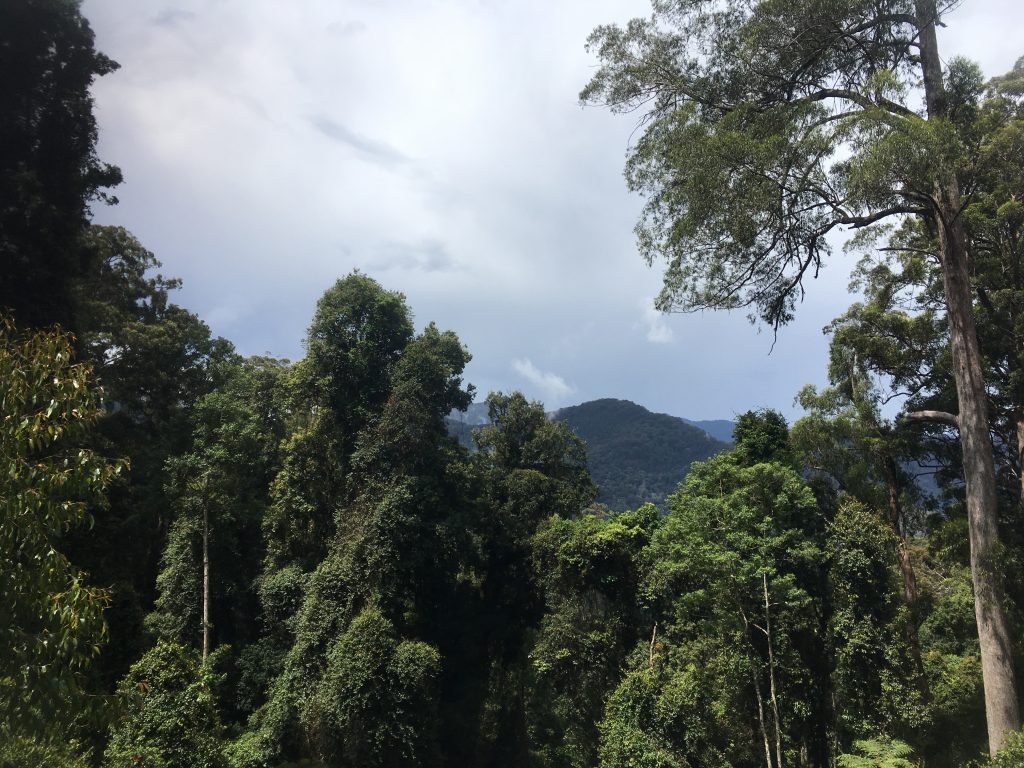 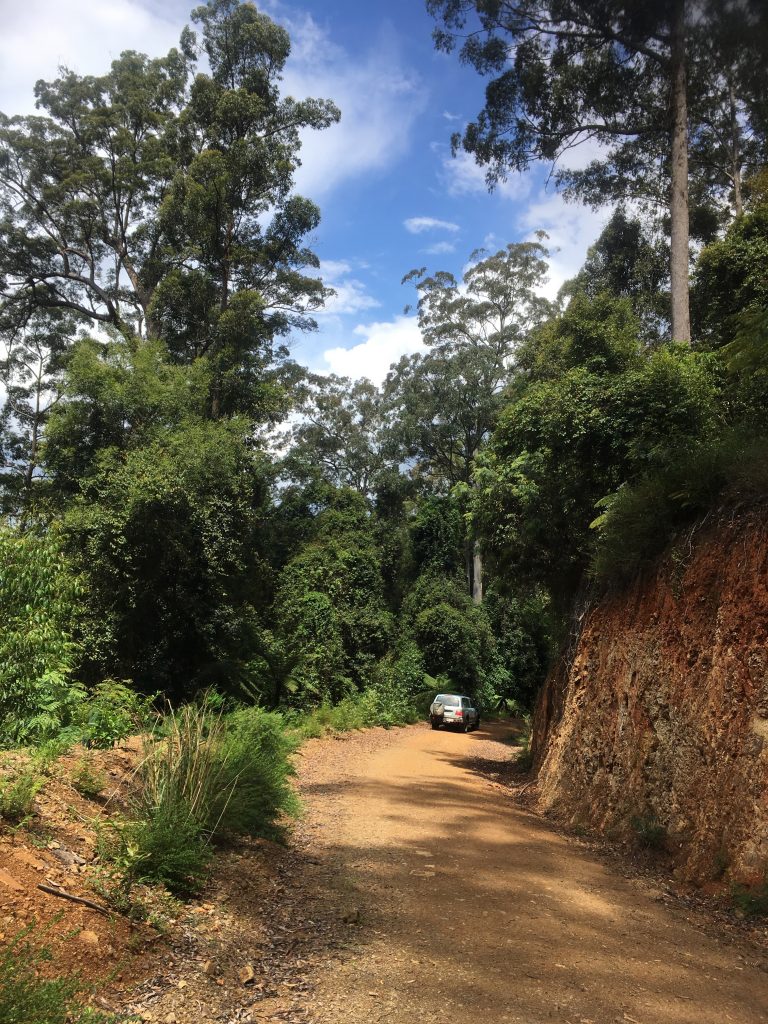 I had originally planned to push through on minor tracks, but as is so often when you are travelling like this you just have to modify the plan to suit what it in front of your eyes. So new headed for a couple of campsites on the edge of the National Park. We were a fair way from any major towns, and they were 4×4 access only, so they would surely be mostly empty? Wrong, both were busy, with people who looked like they may have been there sometime… The one that had some space also had an infestation of sandflies. Time for a rethink.

We headed to the small hamlet of Rolands Plains, where it seemed for a small fee you could camp on the reserve. We called the number on the gate on arrival, and spoke to Neil. After a small pantomime of what we needed (hot showers – no, power – no) Neil argued himself down to charging us $10 for the night. We had been happy to pay the original ‘premium’ rate of $15, but anyway. By that stage we were just looking for somewhere to pitch the tent. Now Neil couldn’t come for the money himself but please go and see Kym, who lived in the yellow house across the street. Although not today, today is Kym’s church day. He will be available in the morning. Hello, country Australia!

By some miracle (well it was church day), despite this toing and froing we managed to get the tent and flysheet up before the next downpour hit, which we could literally see coming. 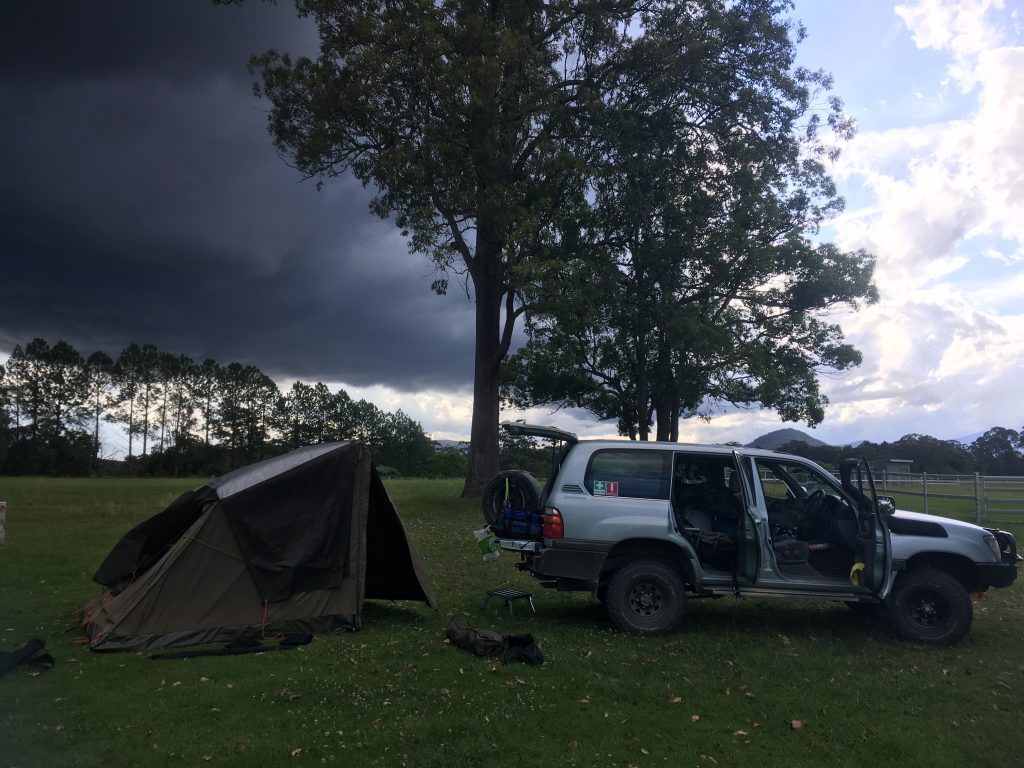 Despite more heavy rain in the night we awoke to a fine sunny morning. We dried out our gear, tried to raise Kym with no luck. So left our $10 and a note in his mailbox. 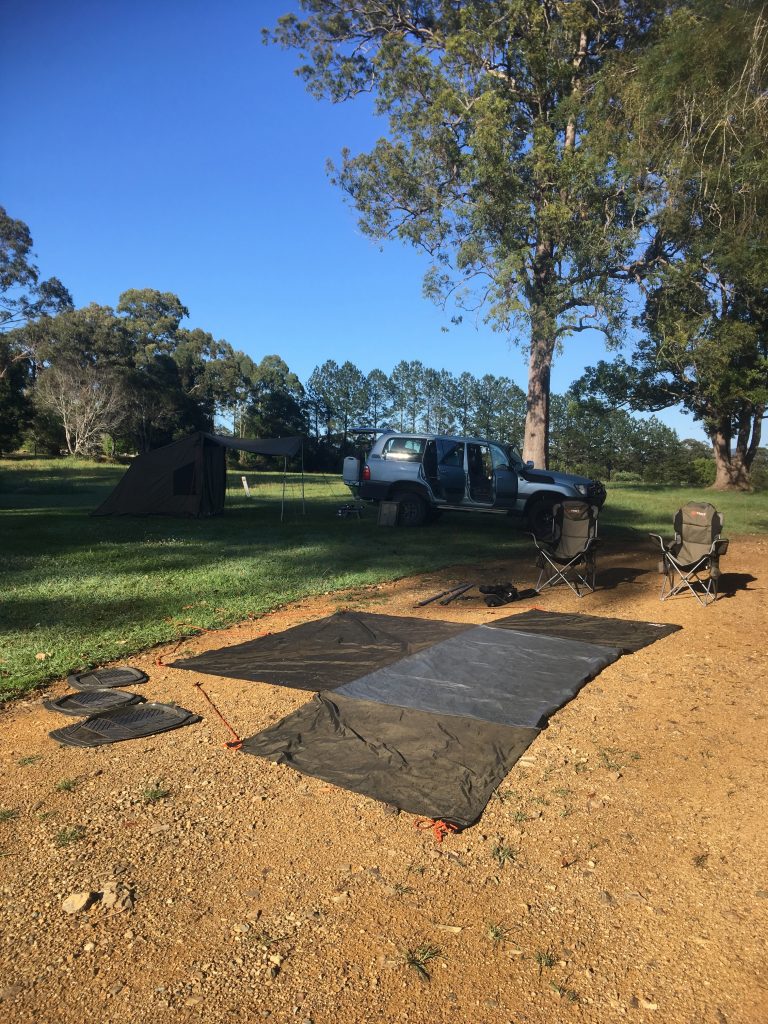 We took the backroads (of course) through to the town of Kempsey that morning. 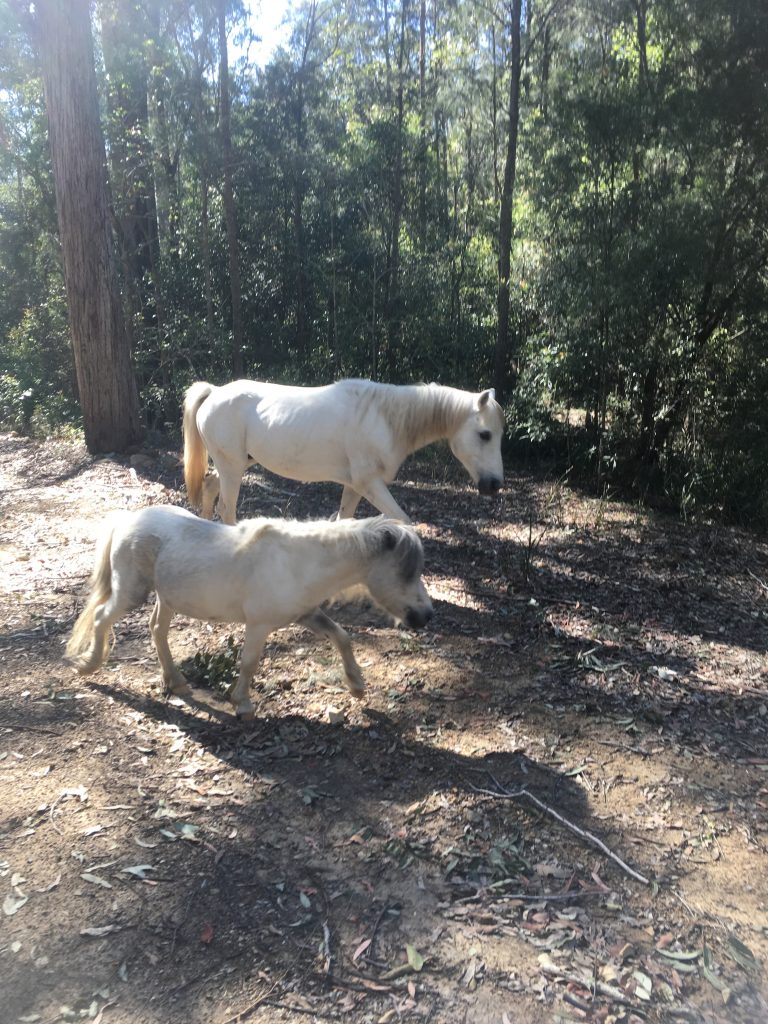 We then took a more minor trail through a small National Park, over the sketchiest bridge of the trip to date. Clogged with mud, and nothing to stop you sliding off either side to the 4m drops. 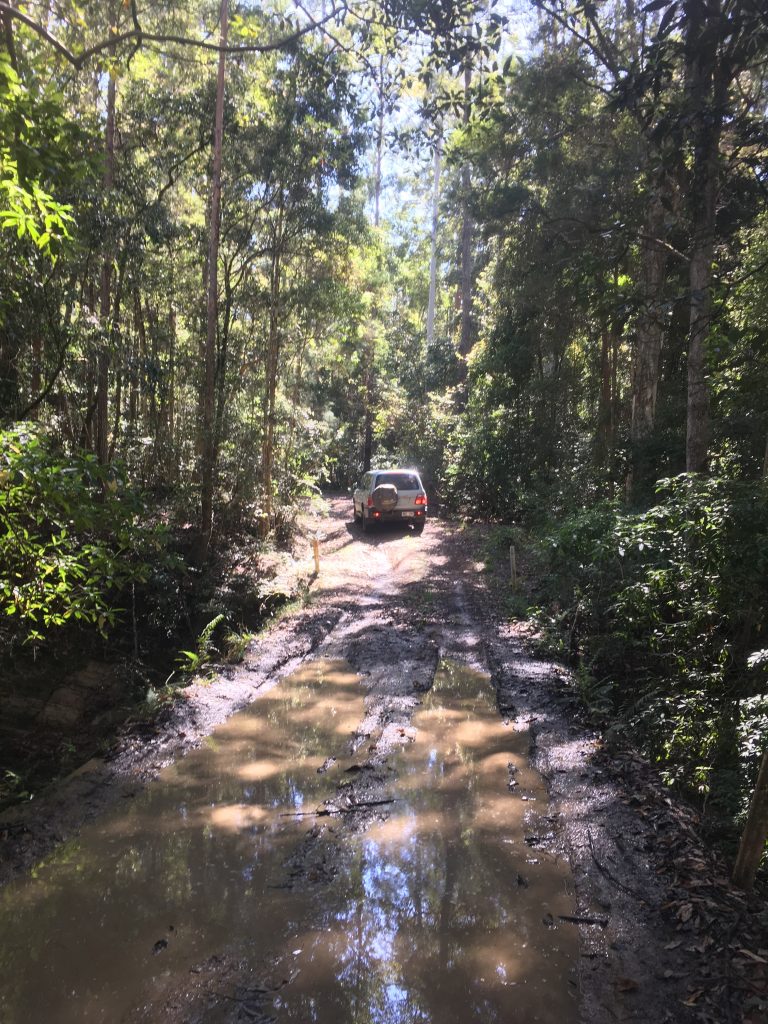 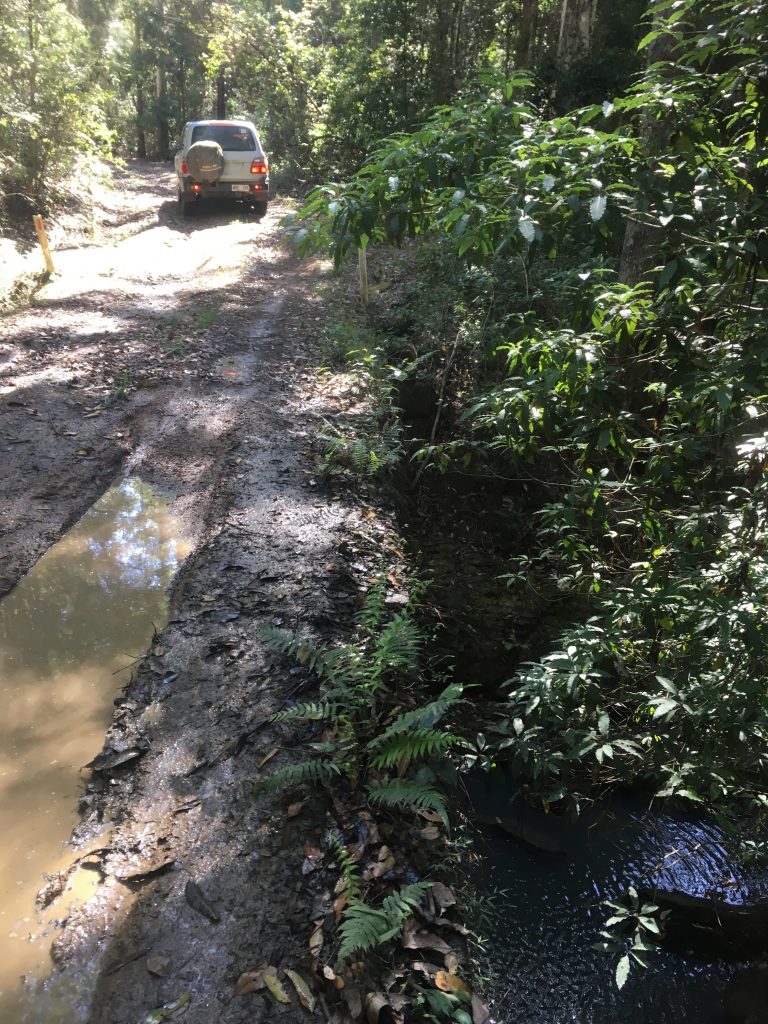 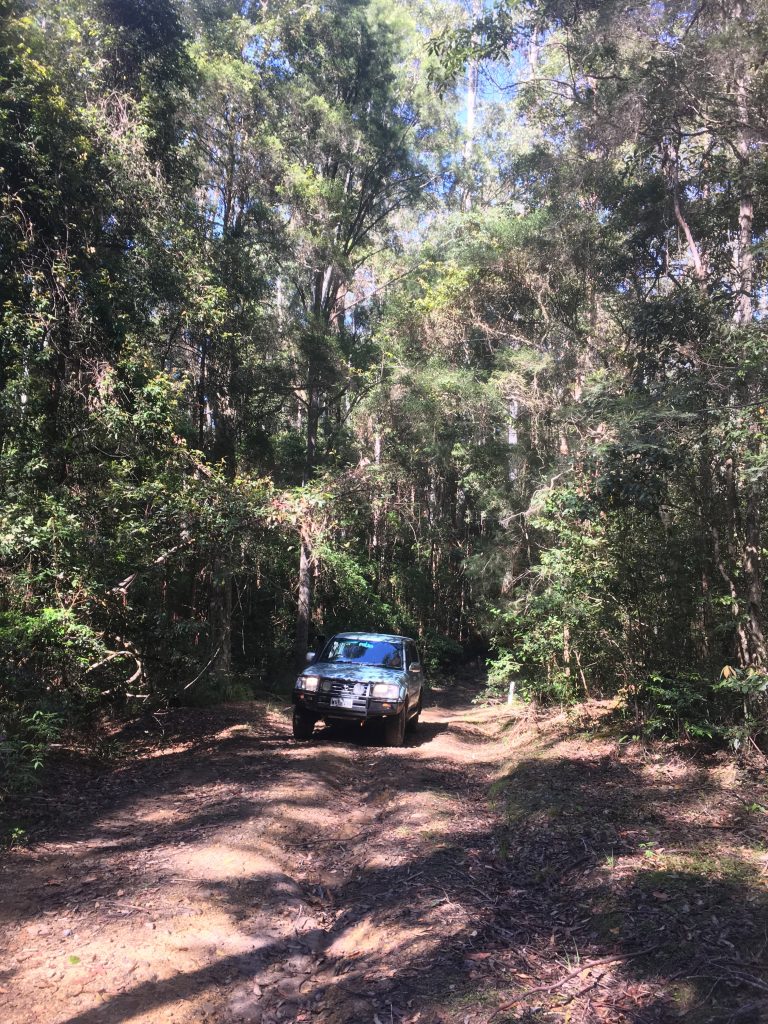 As we got nearer Kempsey, we start to see properties in the bush. Looking very ‘Breaking Bad’ initially, with car wrecks and junk strewn around them. Not sure how many taxes are paid out here… As we get nearer town the properties neaten up till you get some properly nice looking places.

At Kempsey, whilst I grabbed a few things for the next few days. N and the dogs frolicked around in the spring petals. 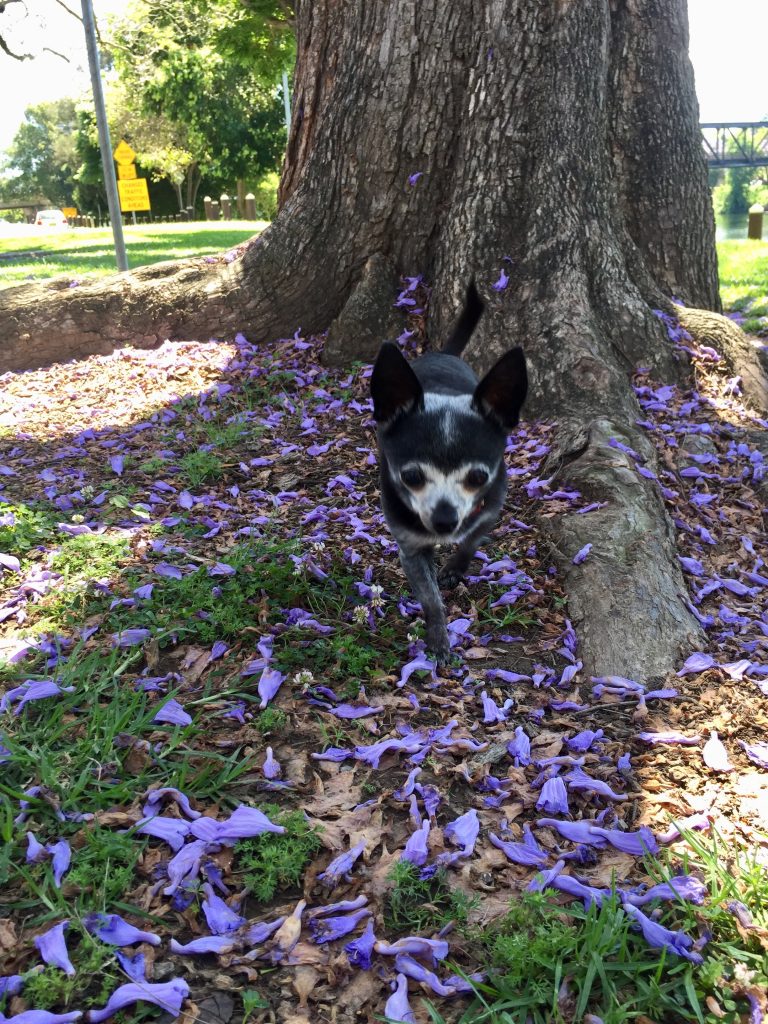 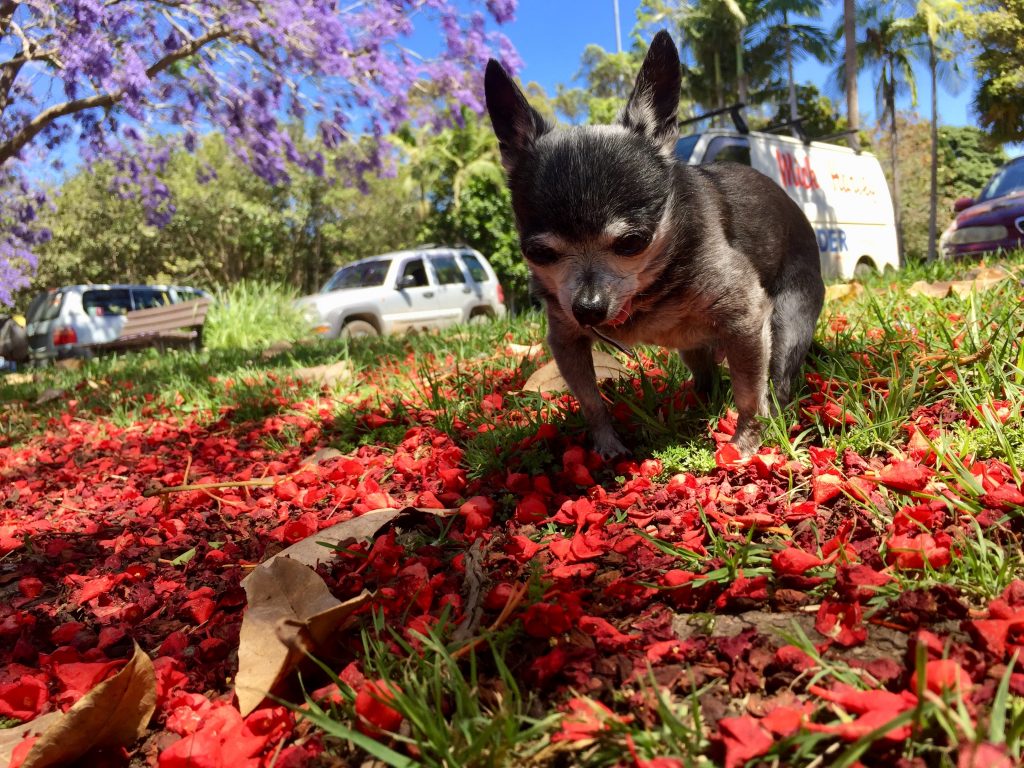 Stocked up, we stopped for fuel. Once of those few servos left where they come out to pump the fuel for you, quaint but unnecessary in my opinion, especially when you have to explain about the main tank and the sub tank – just let me do it like everywhere else… Anyway, despite being a grumpy old man I managed to have conversation with said servo attendant. We chatted about the the town “yeah, there are a few rough types around here” he said, unprompted. I explained about the houses we had seen coming out of the bush “yeah, we don’t see much of those people” yeah, I bet.

Time to get going. 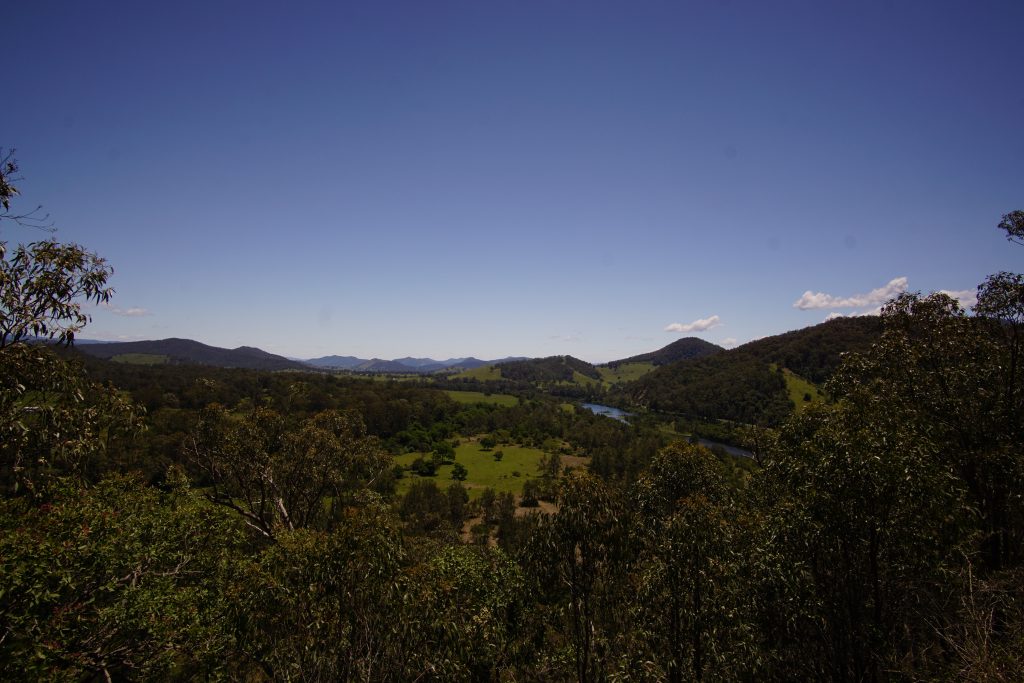 More stunning scenery on the road out of Kempsey, this road was following the Macleay River, as it would all the way to our campsite that night at George’s Creek. The wide bitumen road, became dirt and slowly started getting narrower, then much more narrower still. 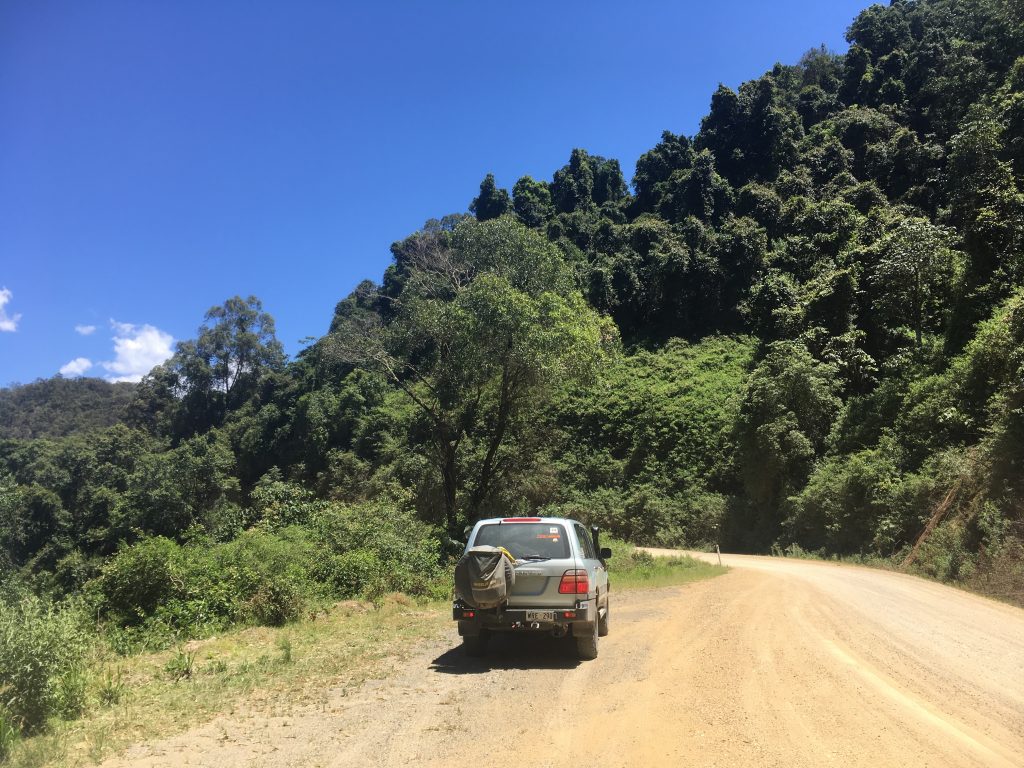 A great drive, no doubt helped by the time of year (spring) and only tempered by some kamikaze drivers and riders coming in the other direction. Maybe I’m overly cautious, maybe I’m just getting old – although based on the evidence of this road, age and not being a dickhead, don’t seem to have any correlation. /rant

We got into camp nice and early. Only four other vehicles (as you can’t get a caravan in there, thankfully!) and plenty of space so everyone had there own area. With plenty of time in hand I cooked up the local steaks we had got back at the butcher in Walcha. 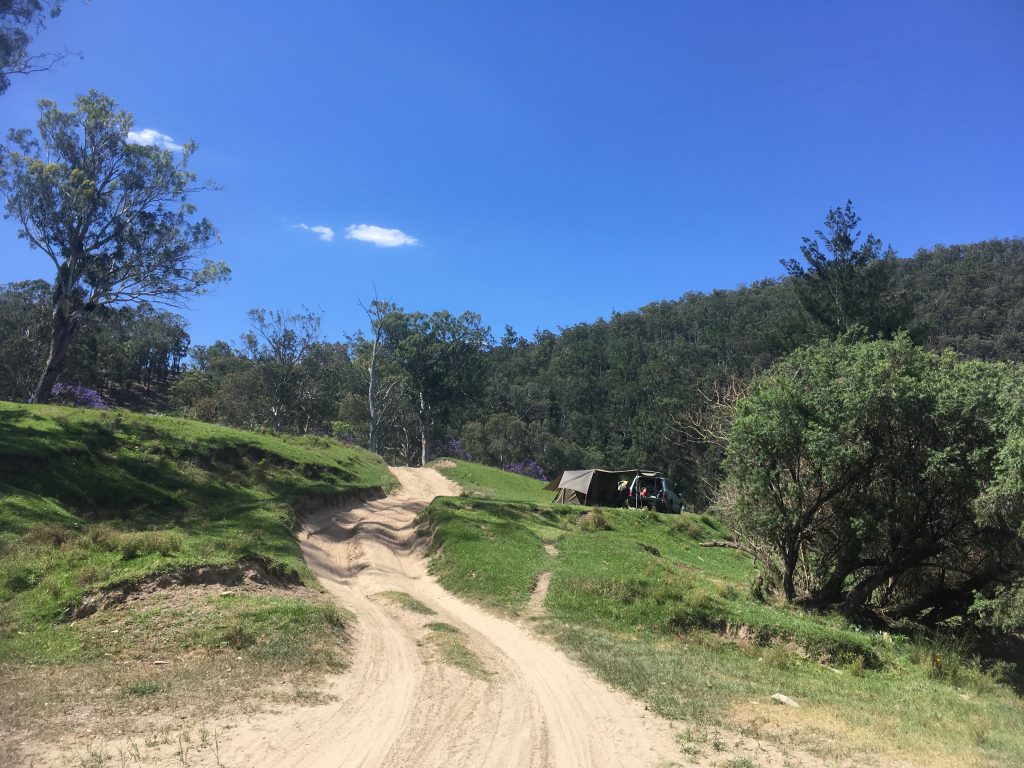 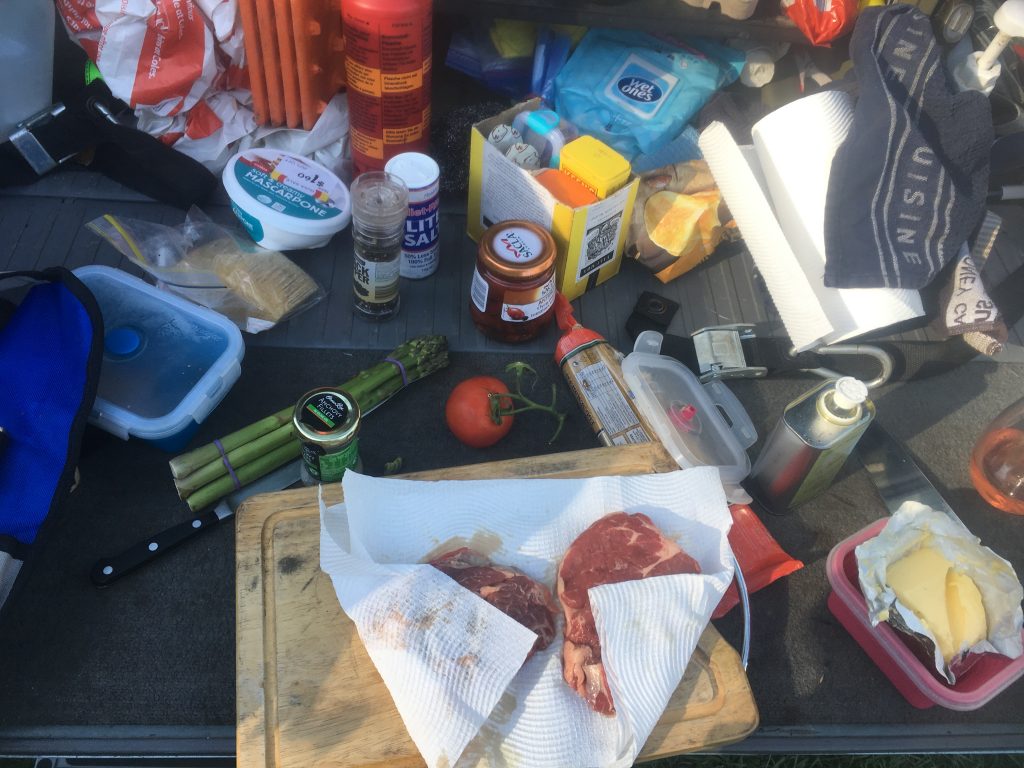 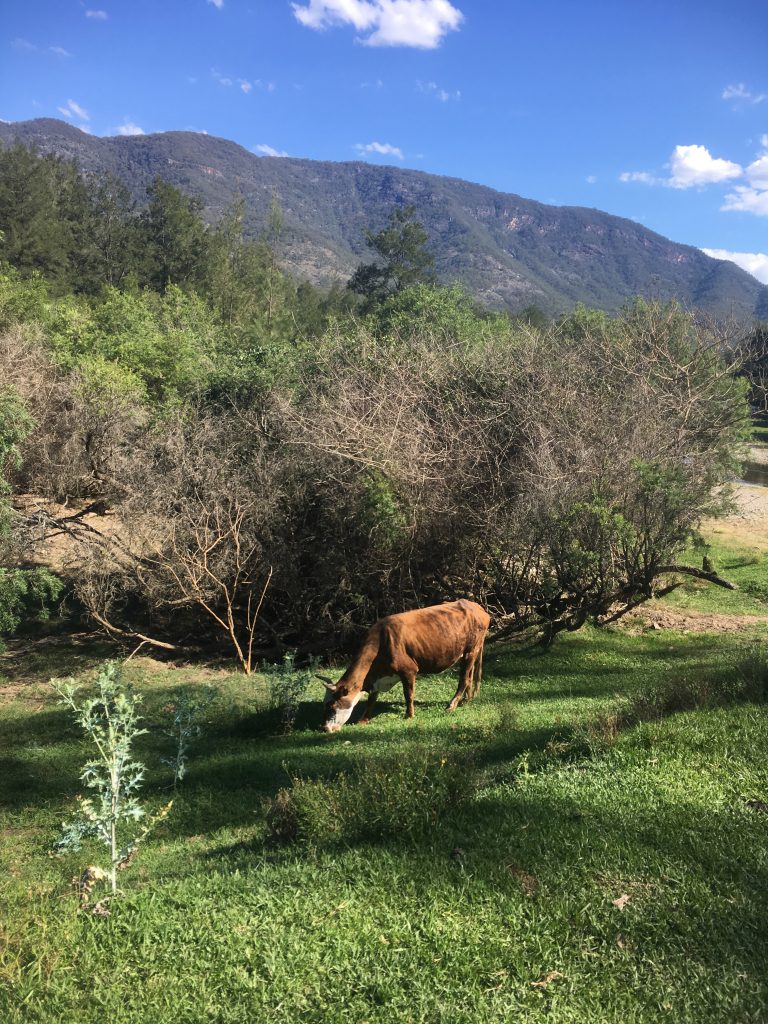 The cows were constant companions, and could be heard munching around the tent all night. 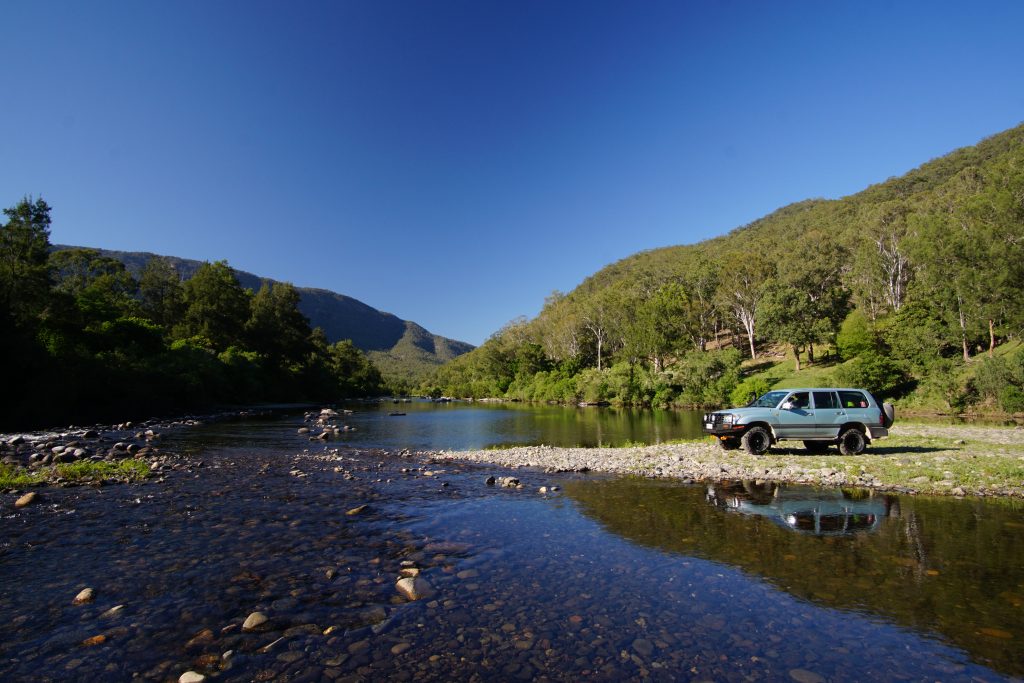 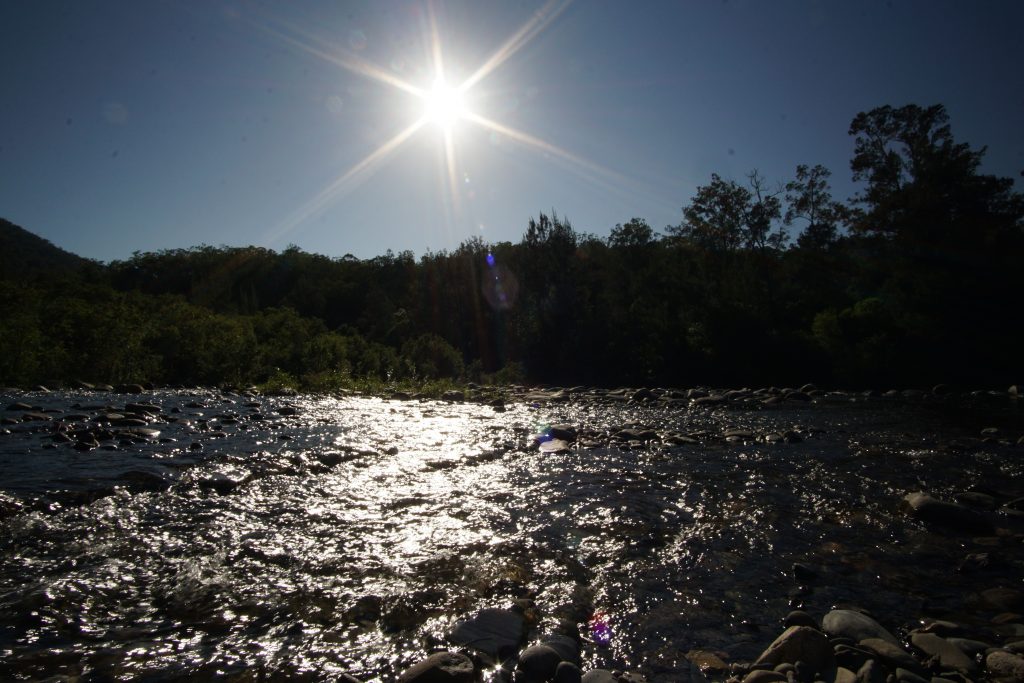 We pushed on, heading north west.