AWOL Around Australia… Forests and Cities

We headed back out, following the Old Pacific Highway. As it’s name suggests this is the old main road up the coast. A much more interesting and attractive option to the motorway if you have time. As the numerous bikers, and the copper hiding in the bushes also thought. 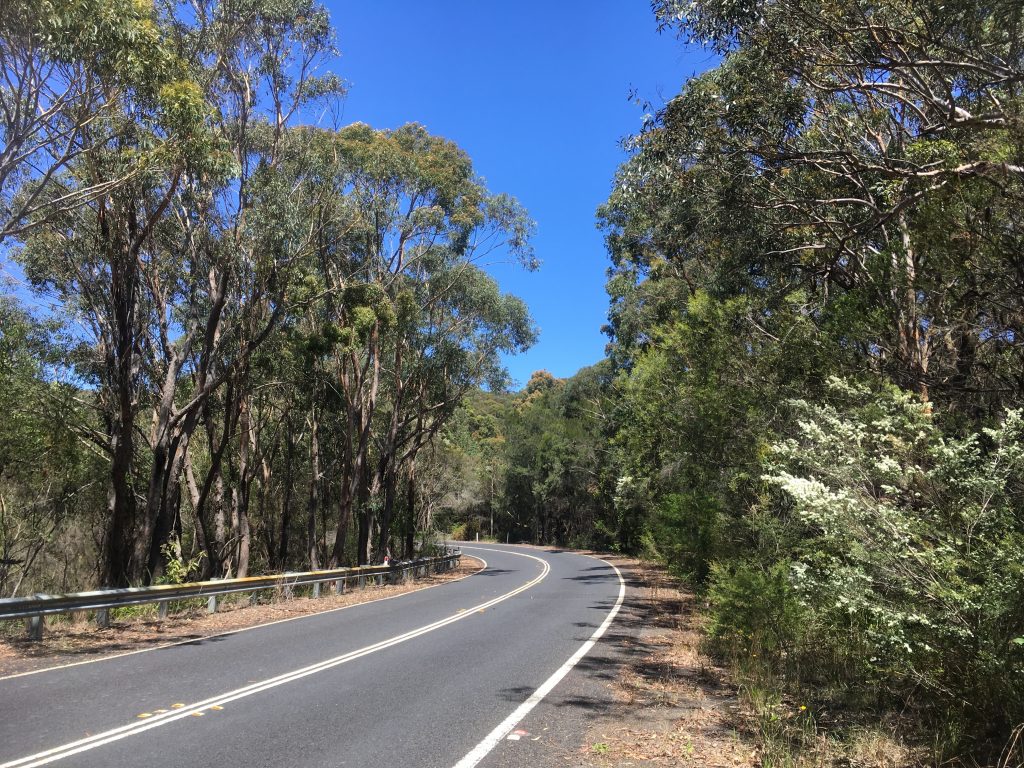 Then came the time to do battle with Sydney. Actually it wasn’t that bad. Devices make navigation so easy in cities these days we ticked off outer Sydney’s greatest hits, Parramatta, Bankstown, before heading to Sutherland so we could drop through Royal National Park. This is the park you fly over when coming in to land at Sydney airport. It looks spectacular from the air, more so than on the ground.

Even on a Monday it was heavingly busy. Also for your $12 entry fee, there are very few viewpoints. Something we noted on the Old Pacific Highway too. Step up your viewpoint game NSW! 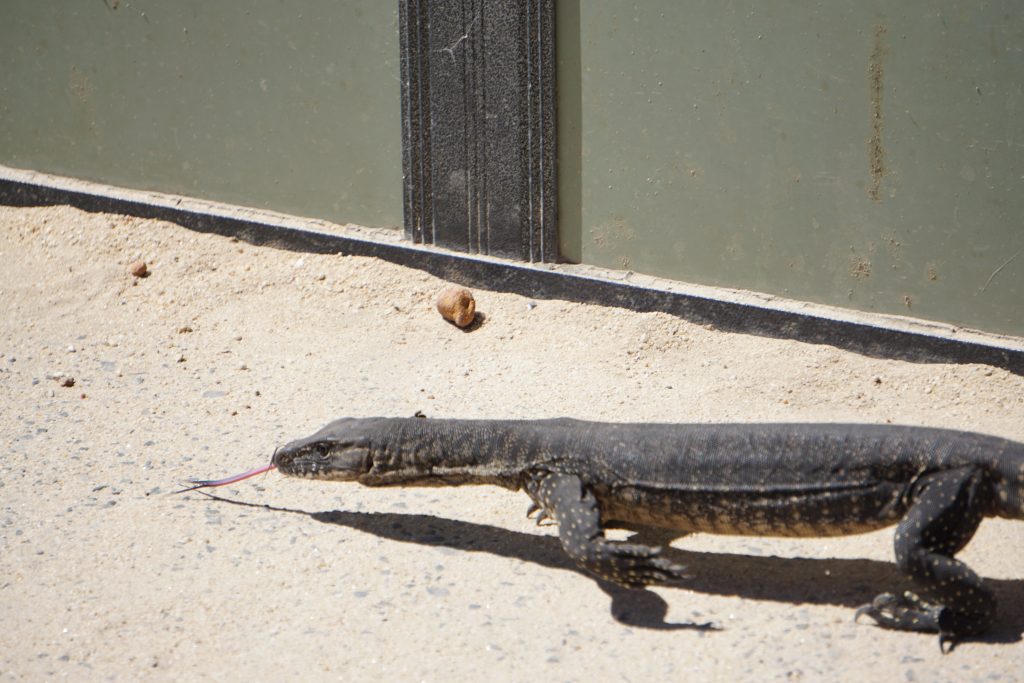 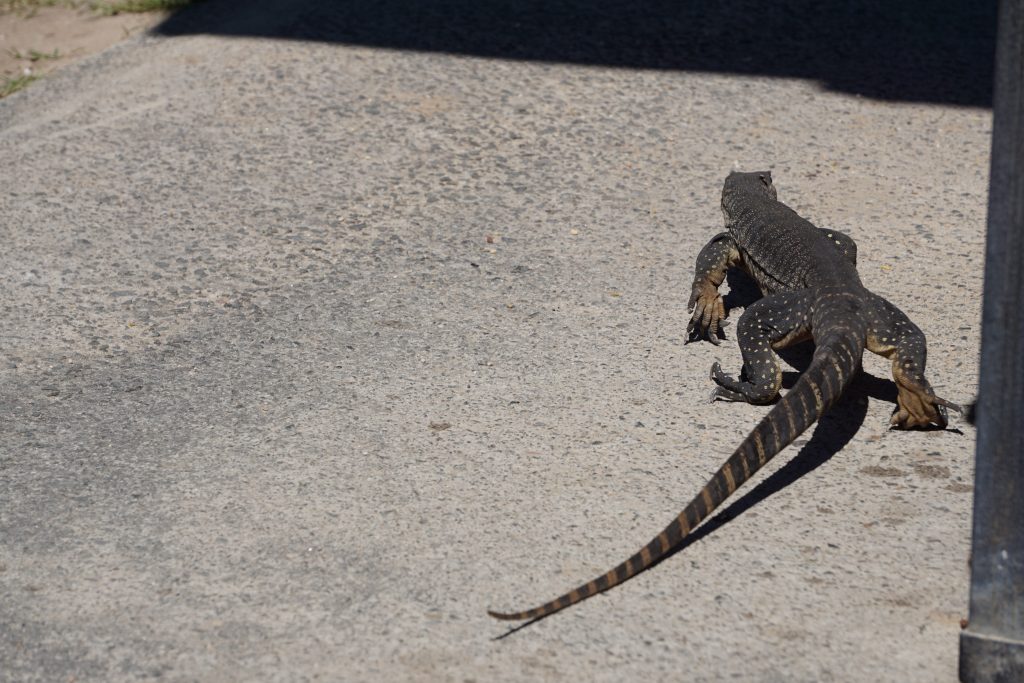 More twisty roads before we could eventually detour back to the highway and get some kms done as time was getting on. Someone had recommended the town of Wollongong as being particularly worth a visit, so we did. We must have missed the good bit as it just seemed to be another town really, arriving as pretty much everyone else wanted to leave work probably didn’t help. Anyway we stocked up on enough for that nights dinner. Picked another free stopover not too far from here and cracked on.

This was marked as a campsite on WikiCamps but we noted a sign on the way out that said no tent camping. Ooops, sorry.

At least making it to Jamberoo, meant we were now in the Southern Highlands and would have to travel far to find a more suitable place to stay for a few nights. First we drove to the town of Moss Vale, to stock up. The weather was hot and looked good for the next few days, so I bought stuff to make tasty salads – watermelon and feta, tuna nicoise – delicious.

There were any number of suitable campsites in this area, both on WikiCamps and ‘Bush Camping with Dogs’ book. I prefer the latter for finding good campsites, and there were some also labelled as 4×4 access only.

Now, N had labeled me an anti-social hermit the previous night when I was spouting off about the problem with van life is that anywhere you can get to, anyone else can as well. Well, she might be right, but after a few days and nights of being surrounded by lots of other people, I just fancied getting bush. I prefer the German word Einzelgänger, which I’ve literally just learnt about.

We had basically all day to check these places out and so I started with the ones that looked appealing (or unappealing, depending on your point of view). About an hours drive later into a state forest and we were sorted. 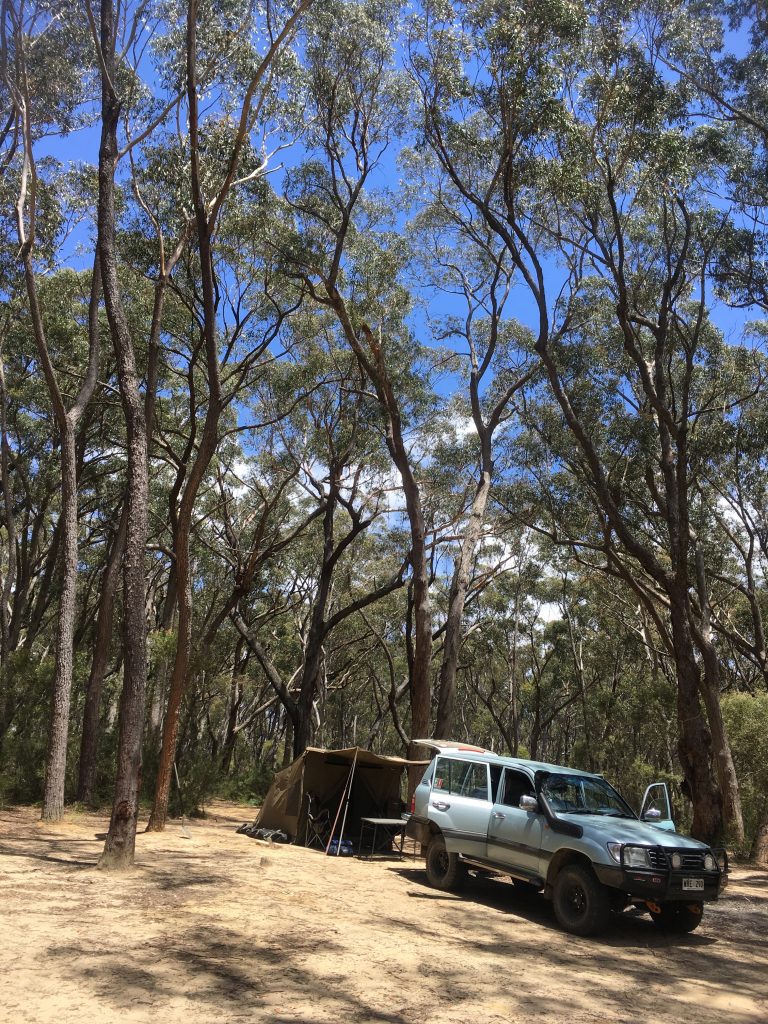 Those clear blue skies didn’t last. It clouded over and got really quite chilly. Now a few days ago at Goondiwindi we had posted a box home with warm clothing and extra stuff we didn’t need anymore. Not everything though, luckily. So I donned my only pair of long socks and got the beanie out. N doesn’t take such chances and still had plenty of stuff to rug up with.

Remember all that salad gear I had bought? Yeah, we had mac’n’cheese that night.

It had a good rain that night but we were warm and dry in the OzTent. 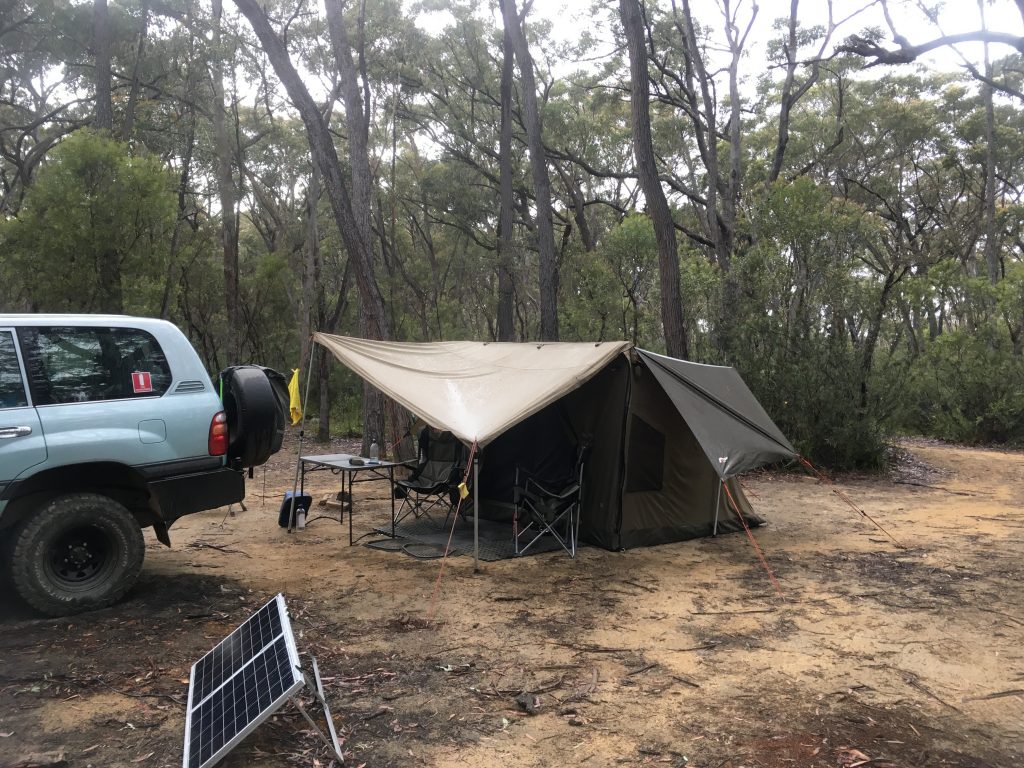 Next morning it had stopped raining but was still overcast and cold. I decided to try a few of the local trails. 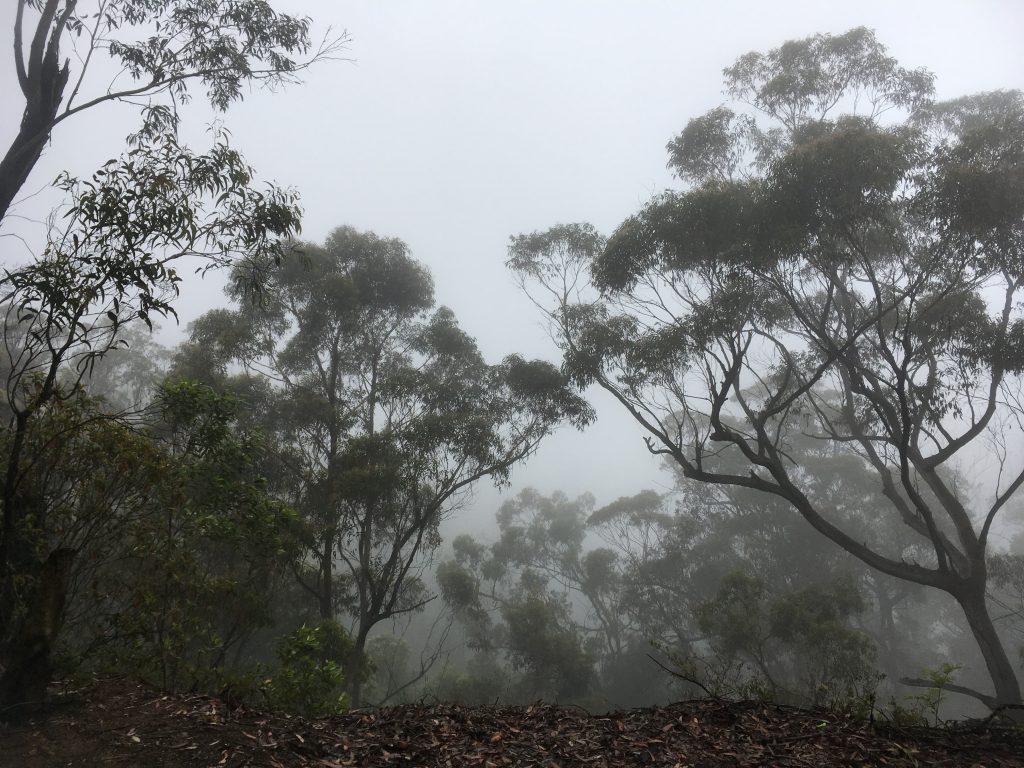 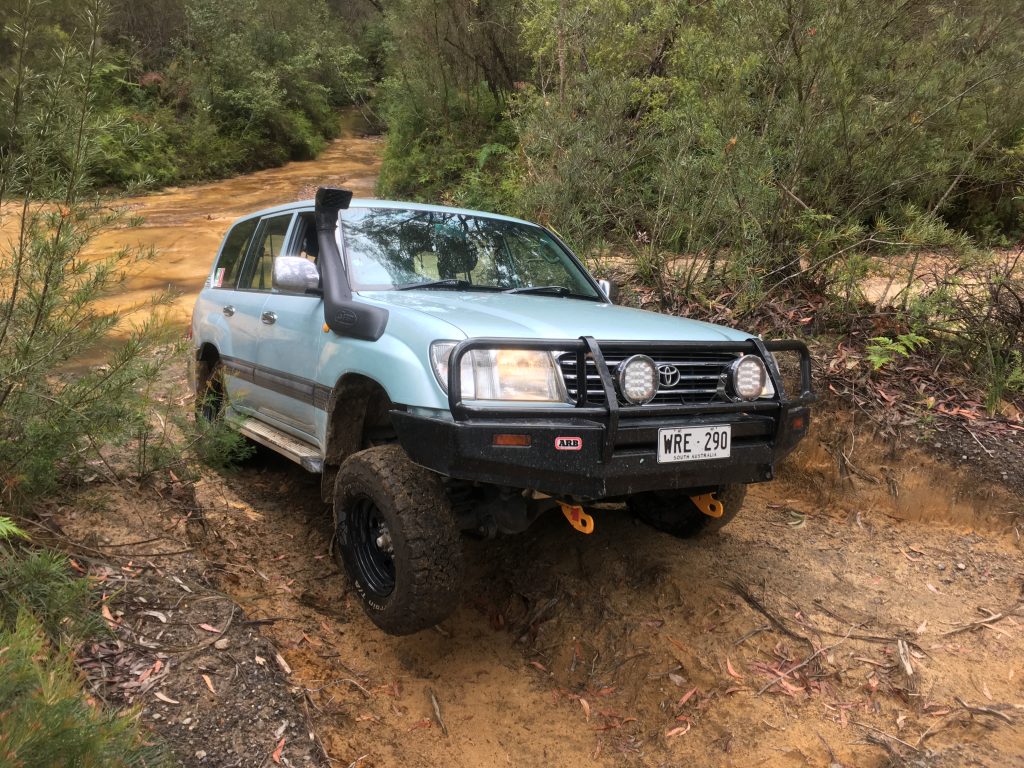 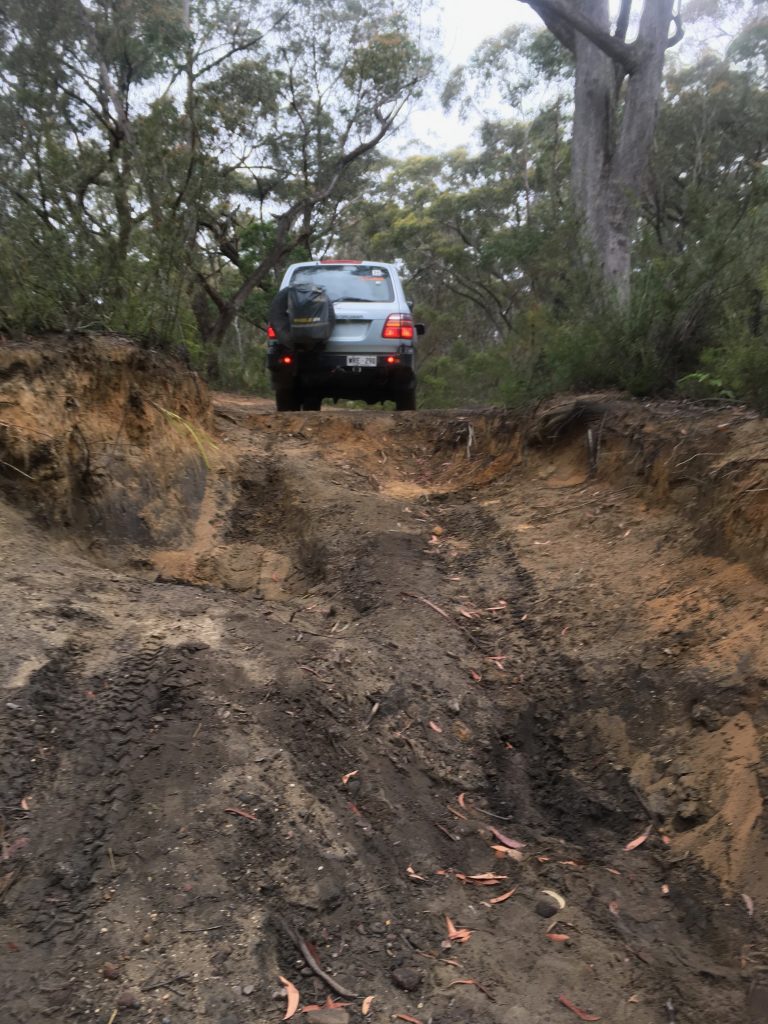 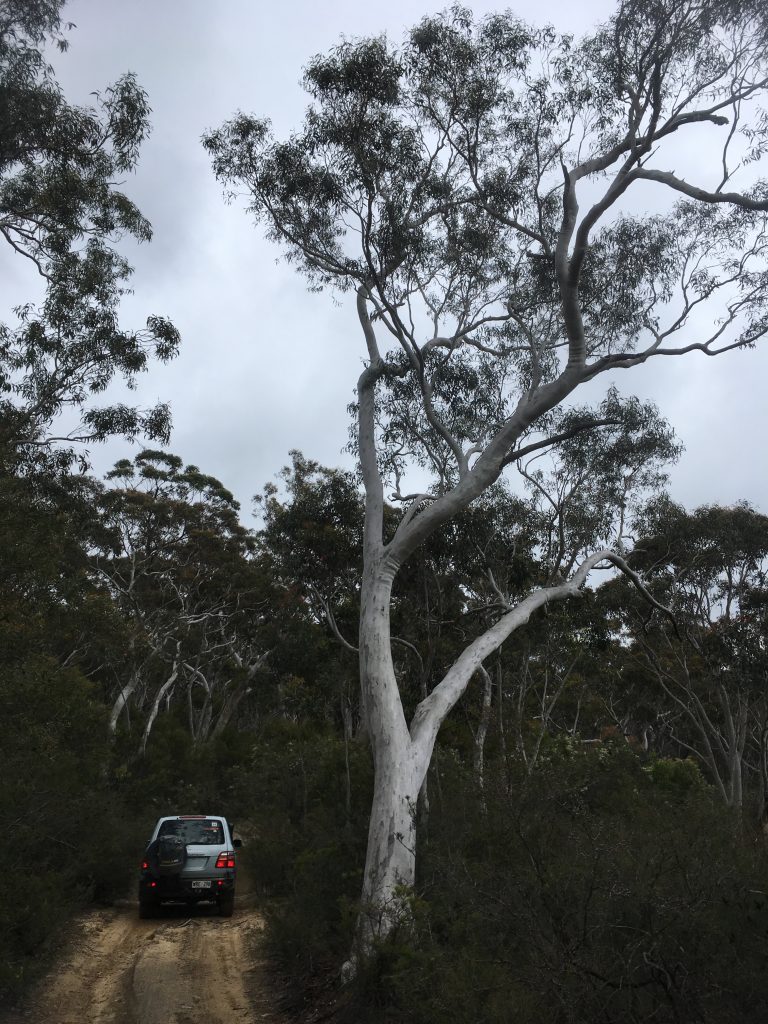 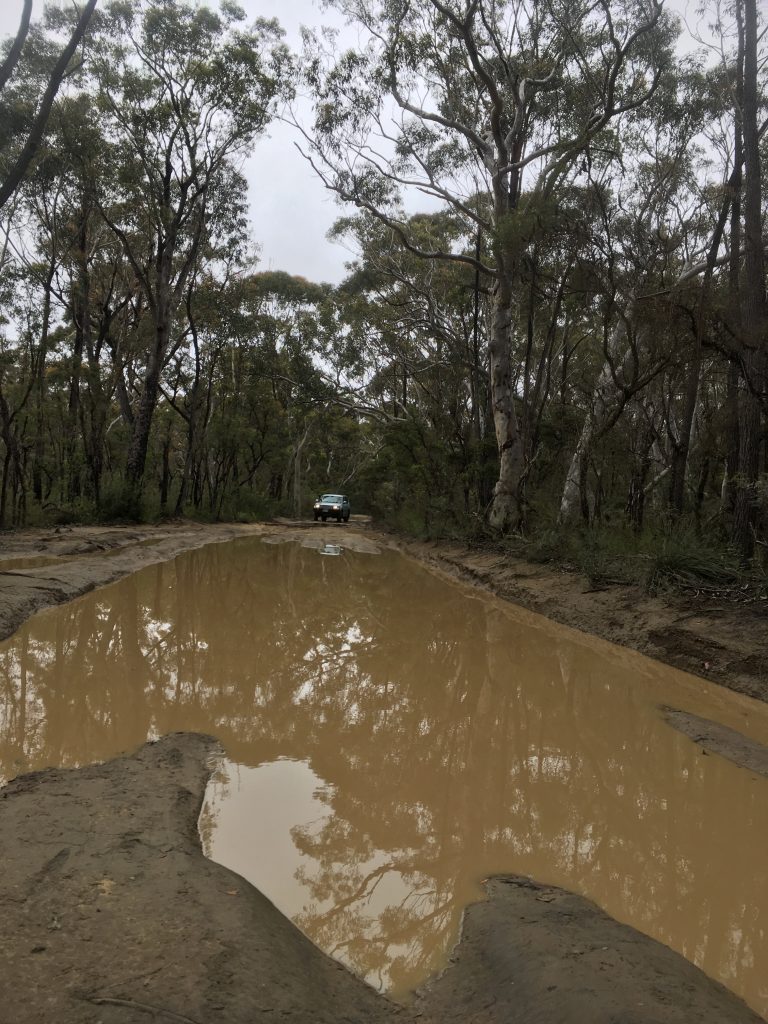 We chilled out (literally) at the camp. I wouldn’t want camping weather to be always like this but it is ok for a few days. We drank hot tea, read, wrote, turned our big towel into two more useful smaller ones, found out our relatively new MacBook appeared to be dead (was generating its own heat, useful on this particular day, but not really a good sign). Lit a fire in our little fire pit and cooked the lamb over charcoal, although we had a tasty warming dahl to go with it, rather than the originally planned watermelon salad! 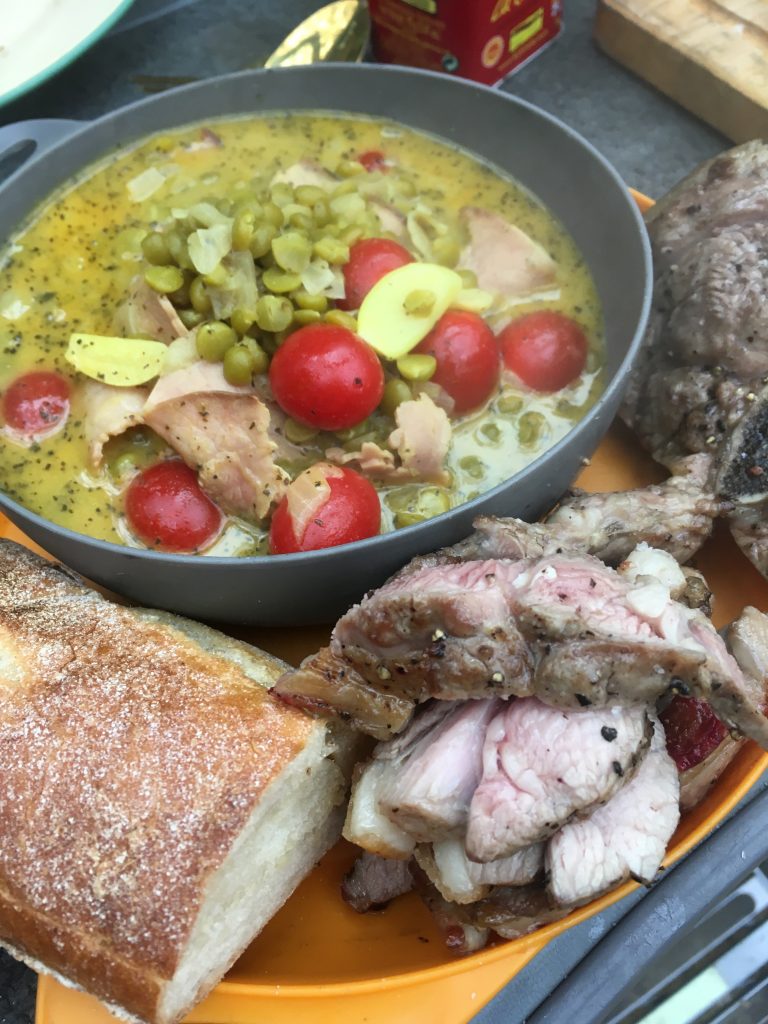 Striking camp and heading out the next day, I took what I thought would be quiet country roads. However this was eastern Australia, and this area must be prime ‘country’ real estate – close enough to commute to Sydney or Canberra but with that country feel. Everything was quite pretty and twee, but busy and still quite hectic, not unlike the countryside of the south east UK where I grew up.

So after a while we just bailed to the highway. A proper highway this one, as it runs between Sydney and Melbourne. Just after Goulburn, we turned off towards the nation’s capital, Canberra.

I had been here once before, but only to the Australian War Memorial. Which is a compulsory trip whilst you are in basic training for the Army, which I was at the time. I could remember the War Memorial as being a pretty good then again most things are preferable to the average day at basic training. I had no memory of Canberra itself, but chances are I was sleeping for most of the journey there and back. I tended to take every opportunity that arose for extra sleep during that time.

So, we were keen to check out the city. Not really any of the government stuff, just a general poke around, and some nice variety of food that you just don’t get in the country. So we booked into the camping at the Exhibition Park for a few nights. 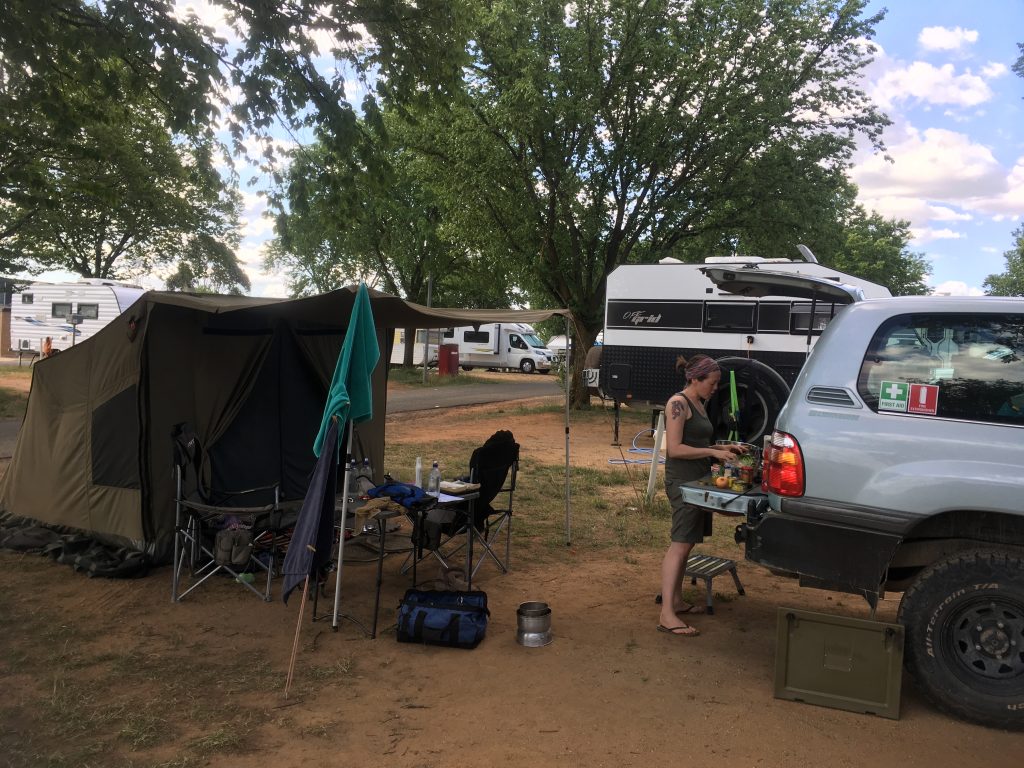 I also had to replace the engine mounts on the Land Cruiser, so as soon as camp was set up I searched out the local Toyota dealer who kindly ordered them overnight, so I could get them before the weekend.

So we really enjoyed Canberra, it’s a city that feels like it’s built for about two million people, yet has a population of less than a quarter of that.

Clean and well organised, with loads of parks, lakes and bush land interwoven through the city and suburbs. Plenty of wide ceremonial type streets and important looking buildings too. 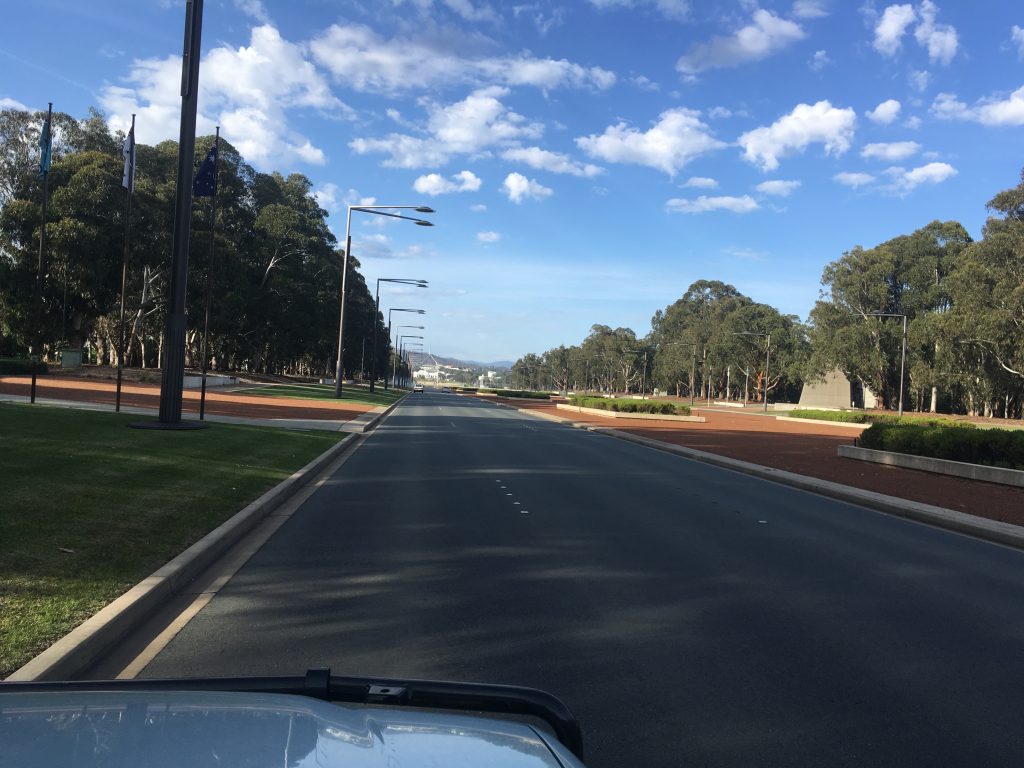 The thing that surprised us most was the incredibly vibrant food scene. From just about every cuisine imaginable represented in the city restaurants, and all looked busy and fun. To plenty of markets to choose from, food as well as arts and crafts. 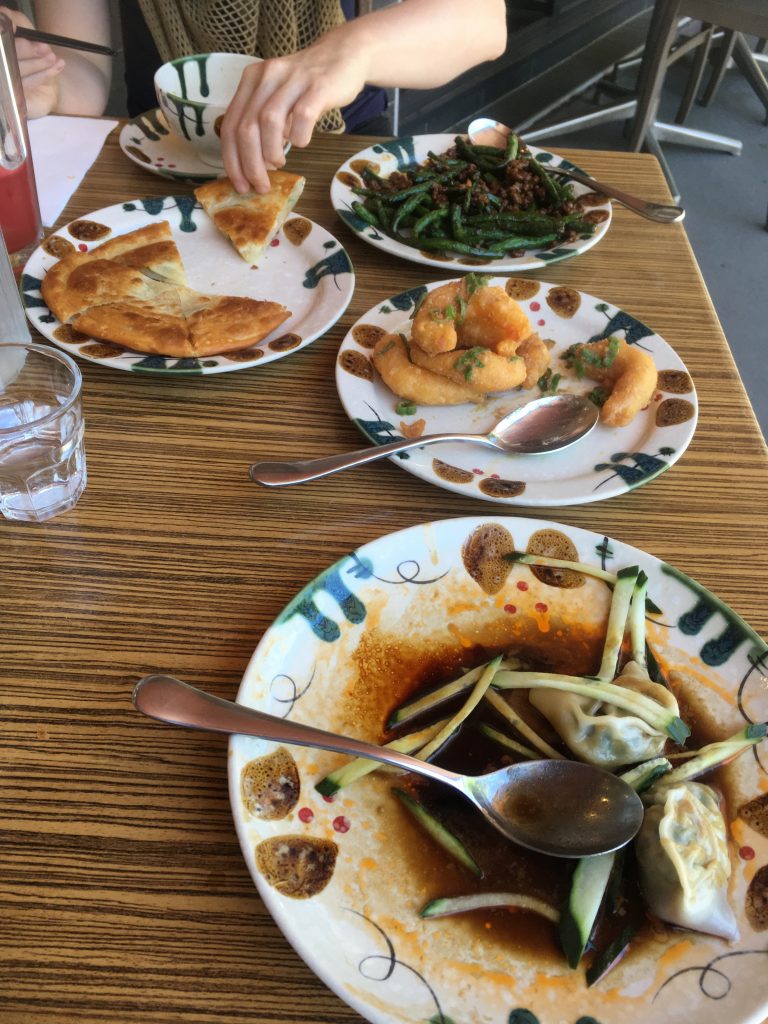 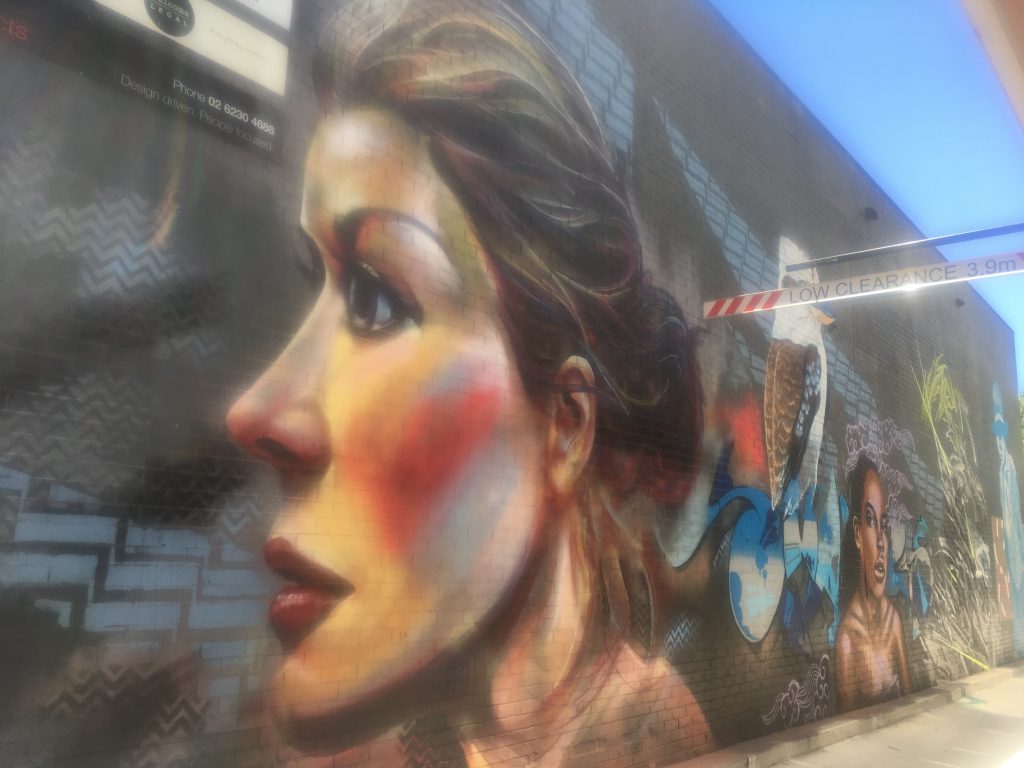 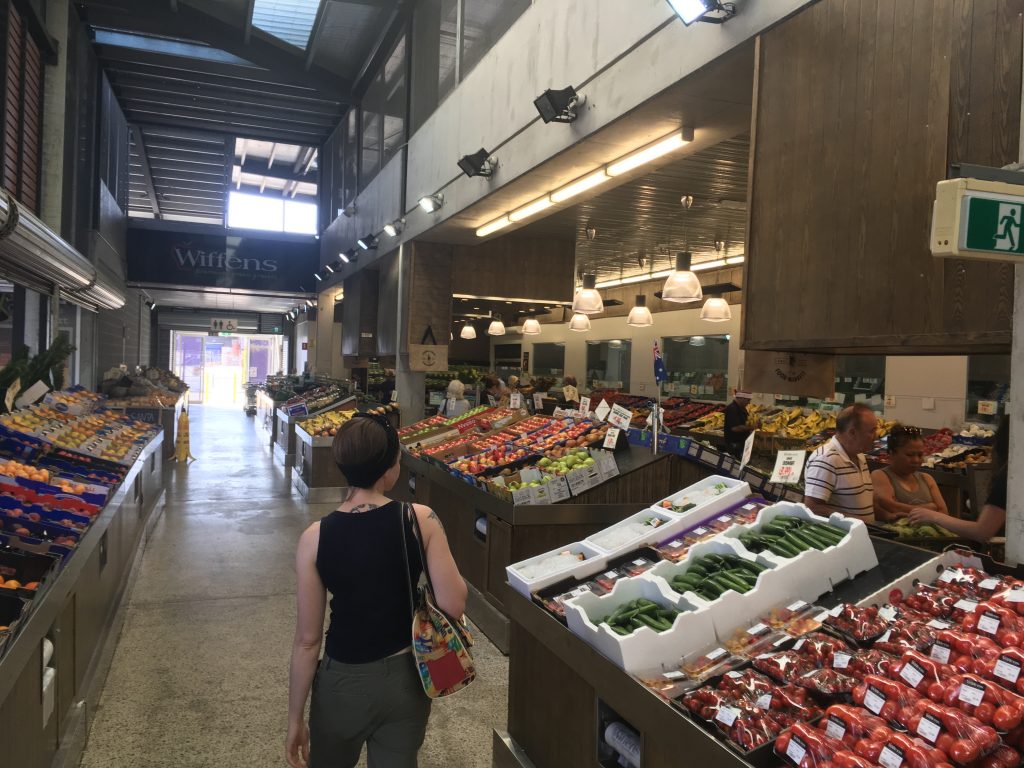 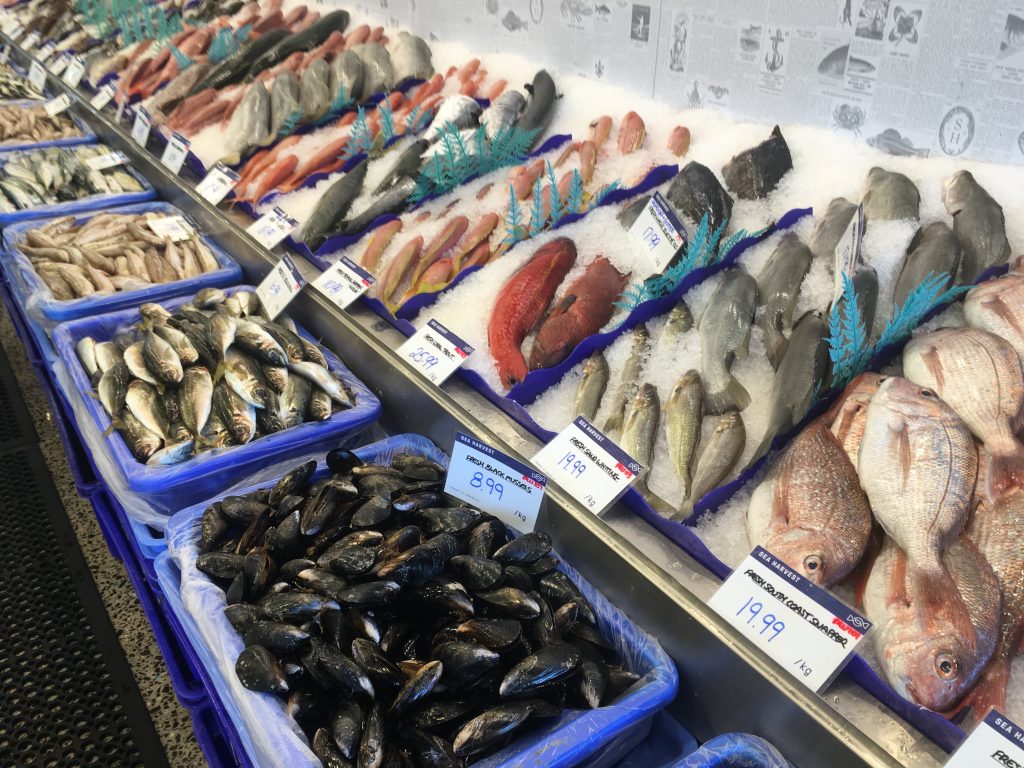 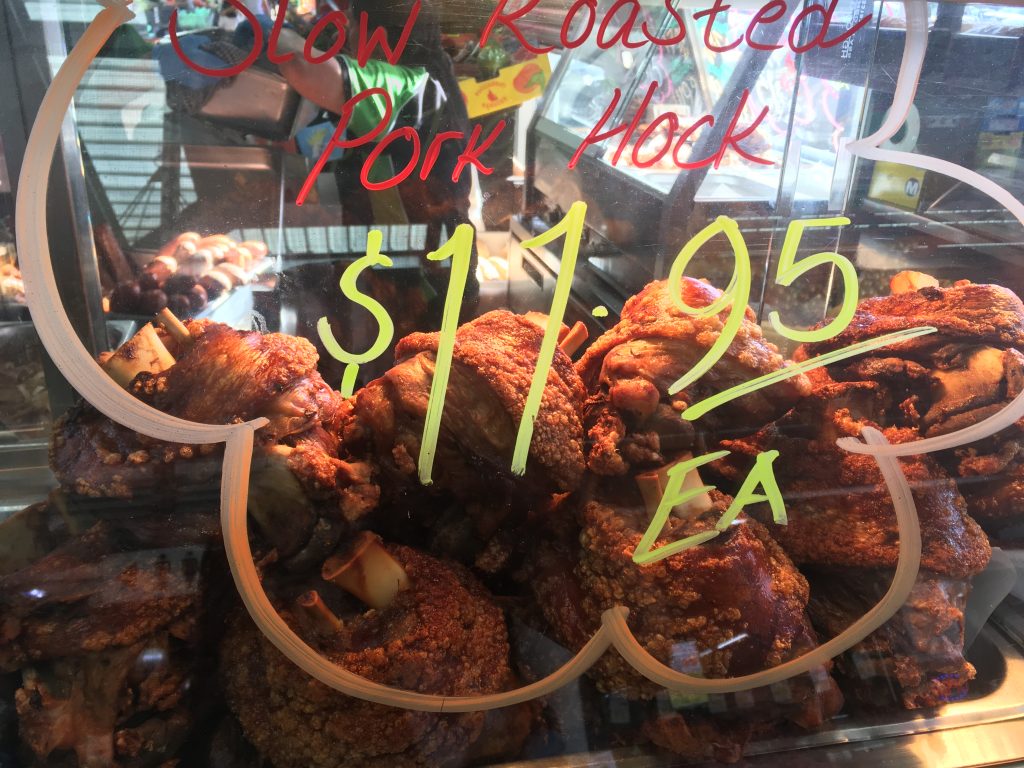 So with the Cruiser fighting fit again, and our pantry and fridge stocked to overflowing. We started to make our way south east, back to the coast. Hoping that now we were far enough from major centres that the busyness we had seen so far on the east coast, would have eased to a more gentle pace, that we normally enjoy when exploring country Australia.

We took a cross country route (obviously). Not exactly the one first intended, as it appeared that only existed on the map, but enough to get us out to the coast. 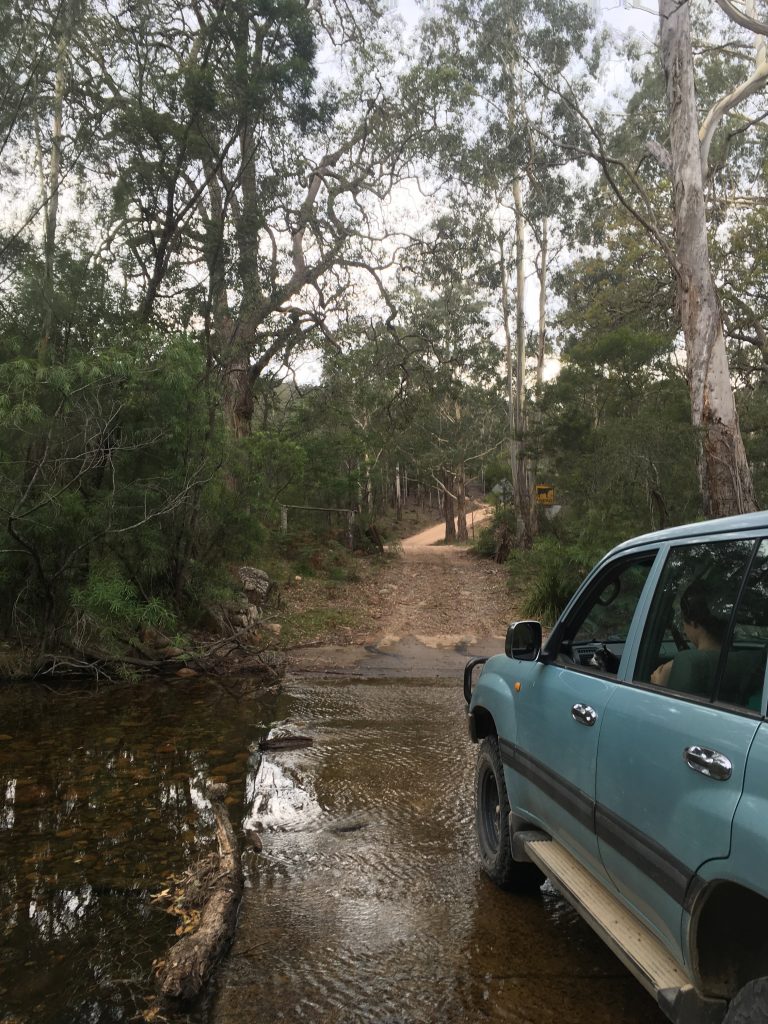 However it did mean by the time we finally popped out of the bush, time was getting on, and the weather looked like it was closing in. A quick scan of WikiCamps told us that there was a cheap bush camp not too far from where we were. It had been overcast for most of the day, and now the rain came. This sort of weather would be with us for about the next week. 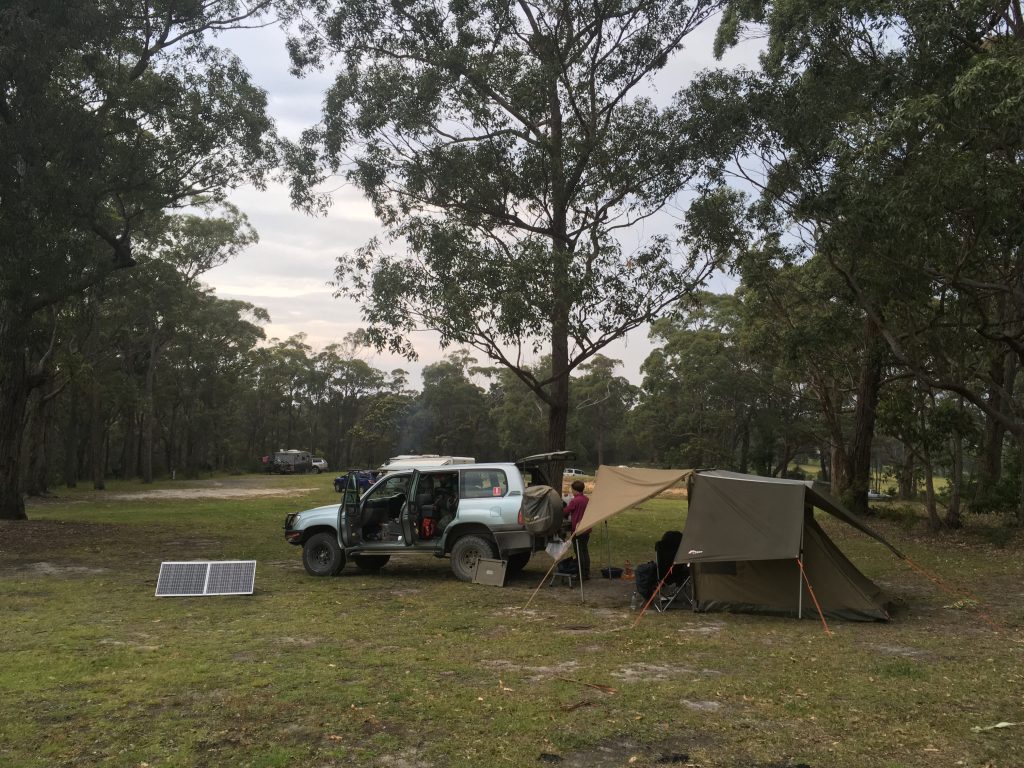 2 thoughts on “AWOL Around Australia… Forests and Cities”