AWOL Around Australia… The Festive Season, and a bit of a hiccup…

A bit of a detour, but we checked out the town of Lakes Entrance the next morning. The town is just another seaside fishing/tourist town, mind you the view of the inlet lakes on the drive in is pretty good. 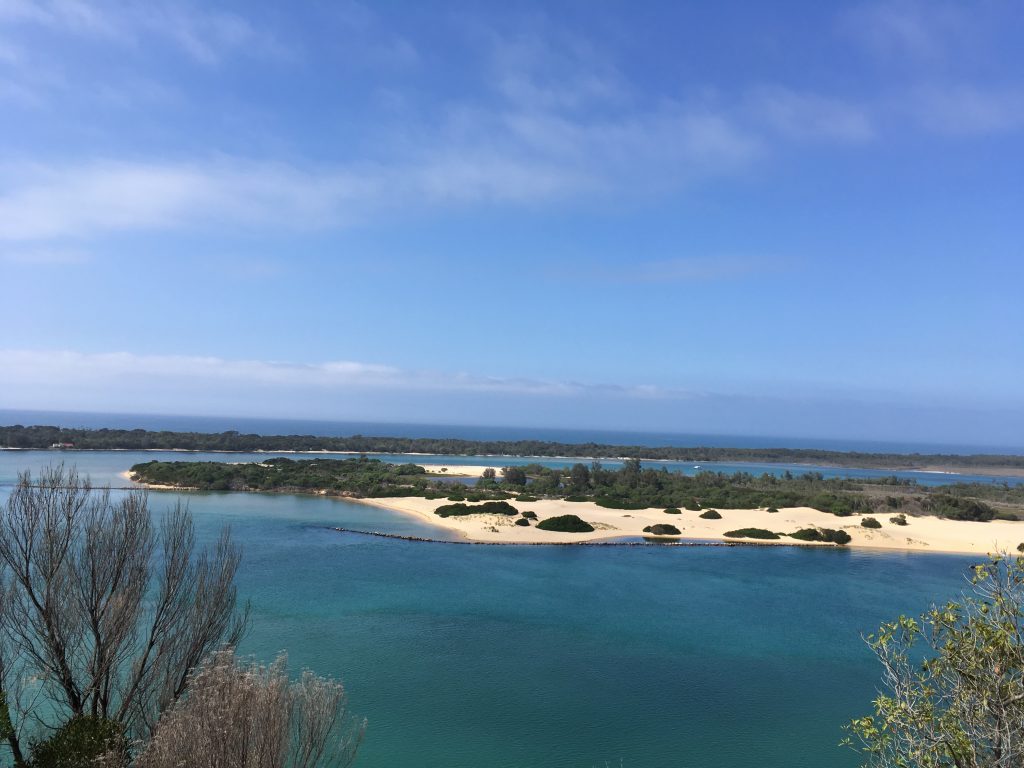 I was keen to get a handle on this warning light issue. I bought a cheap scan tool but it didn’t work with my Toyota. A bit more googling and it seemed taking it to a main dealer might be the only option. Thursday, the week before Christmas…

The first dealer was booked out, but luckily there are more Toyota dealers than any other in Australia, so we just tried our luck in the next town.

“I’ll get one of the boys to look after lunch, can you come back in half an hour?” of course we could. Ash (are all the good ones called that?) said we had a coolant temp sensor fault logged, no biggie, probably just the age of the vehicle. He spent about half an hour on our car while we waited in the lounge and could drink all the coffee and cans of soft drink we wanted. So they slugged us a massive $19.80. Total. The dealer I buy my parts from in Adelaide charges $147 an hour. Faith in humanity restored. Thank you Sale Toyota, Victoria.

I had a chuckle when the lady writing out the invoice is asking for a few details “do you have, an, errrm, postal address…?” we must look like bonifide travellers now I guess!

Starving by now, we grab some burgers and fries as a treat, and generally feel good about how we were treated and the fact Bertha will live to fight another day. We drive back down to the coast to grab a beachside campsite for the night.

Set up and having some early refreshments, a young lady comes over to ask if we can help rescue their car that is bogged in the sand. 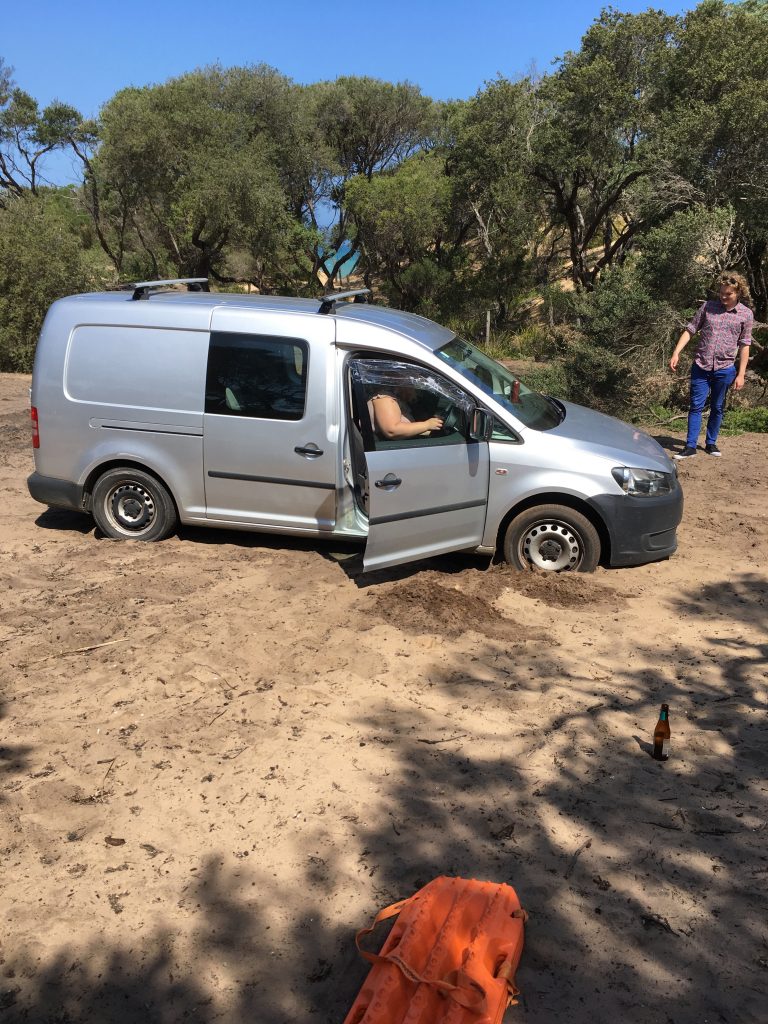 With the VW Caddy is out of its sandpit, and as they are thanking me I explain that only an hour or so ago some people were good to us, so it must be the day for it! Pay it forwards. The four backpackers invite us over to their camp later to sample their homemade spirits! Thinking that they were probably just being polite, and they wouldn’t really want to hang around with a couple of old farts like us – we don’t – and then we don’t get any choice when they bowl over to our camp a few hours later to pour us some drinks to thank us anyway. All good, we shared some drinks and tales with them. After all, we are just like them – fifteen to twenty years later, which seems to work for everyone. Although I pass up on the joint I get offered multiple times “nah mate, those days are behind me” “but I can’t smoke anymore…” says the very stoned Estonian chap “sorry man, I can’t help you out, give it to someone else” pretty funny.

Next day we are up and out early. We have some kms to do today. We want to get close to Hastings on the Mornington Peninsula. Where N has important wool business the next day (she had crocheted me a great winter jumper at the start of this trip. Which I had posted home as the weather started to warm up, normally the Australian summer, so consistently and reliable hot. As I sit writing this, freezing and looking out on a rainy coast it is a decision I have regretted more times than I can remember, and not one she fails to remind me of…). We pegged the tent at a little spot at Lang Lang, on the coast but a coastal inlet so should be a bit more sheltered than normal coastal campsites.

We hung around Lang Lang for a few days. We were both a bit travel fatigued and were looking forward to the Airbnb cottage we had coming up for four nights over Christmas. I would have liked to get the Cruiser fixed but trying to do anything in the run up to Christmas just wasn’t happening. Sometimes there is no point trying to swim against the current.

Lang Lang wasn’t the greatest coastal campsite we had ever found, but we were in one of the most densely populated parts of the country, so it was peaceful enough and had its moments. 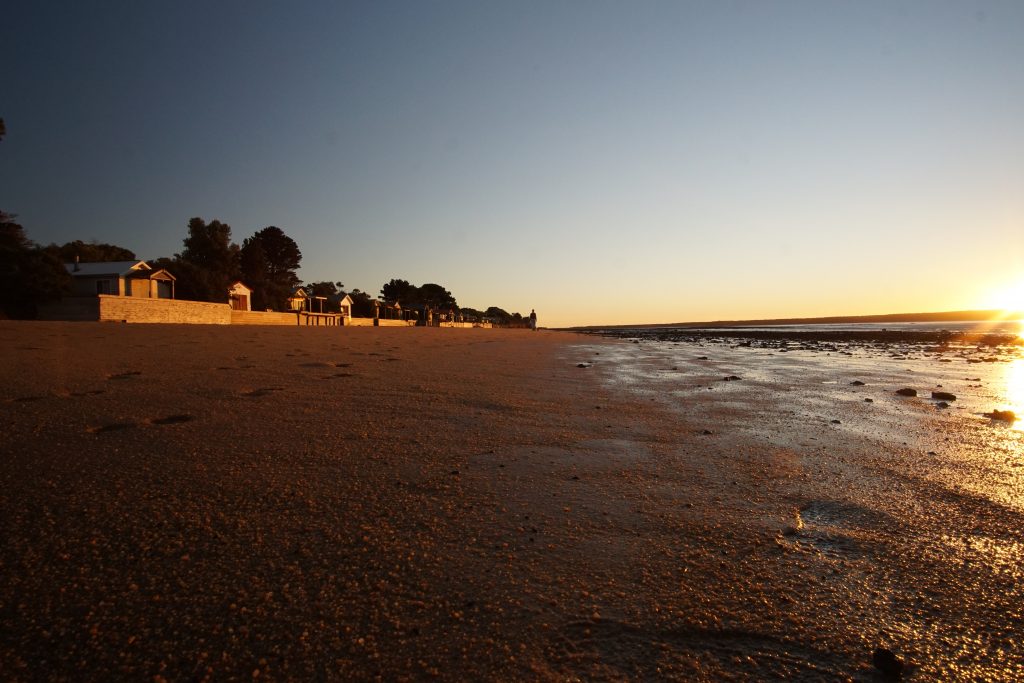 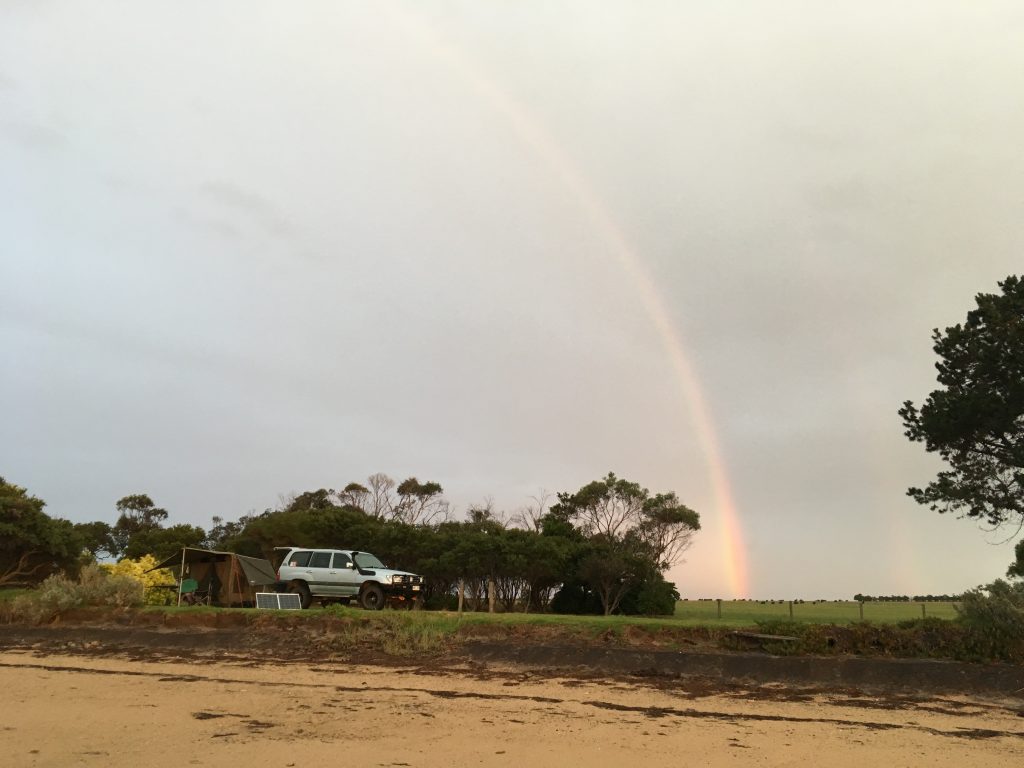 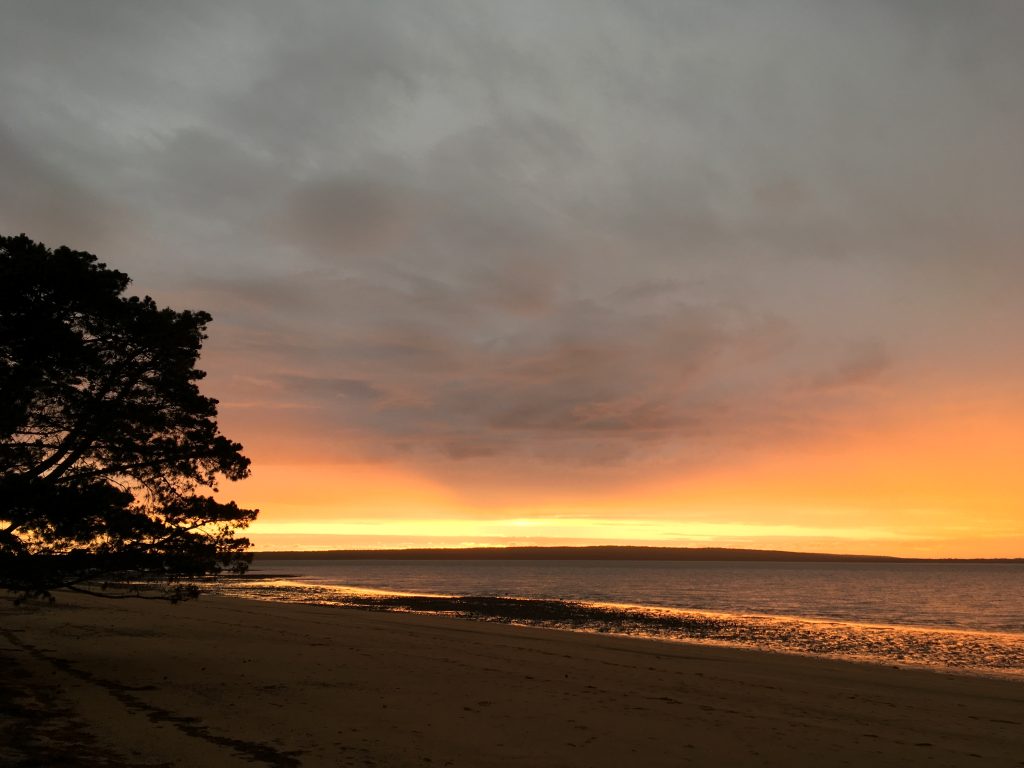 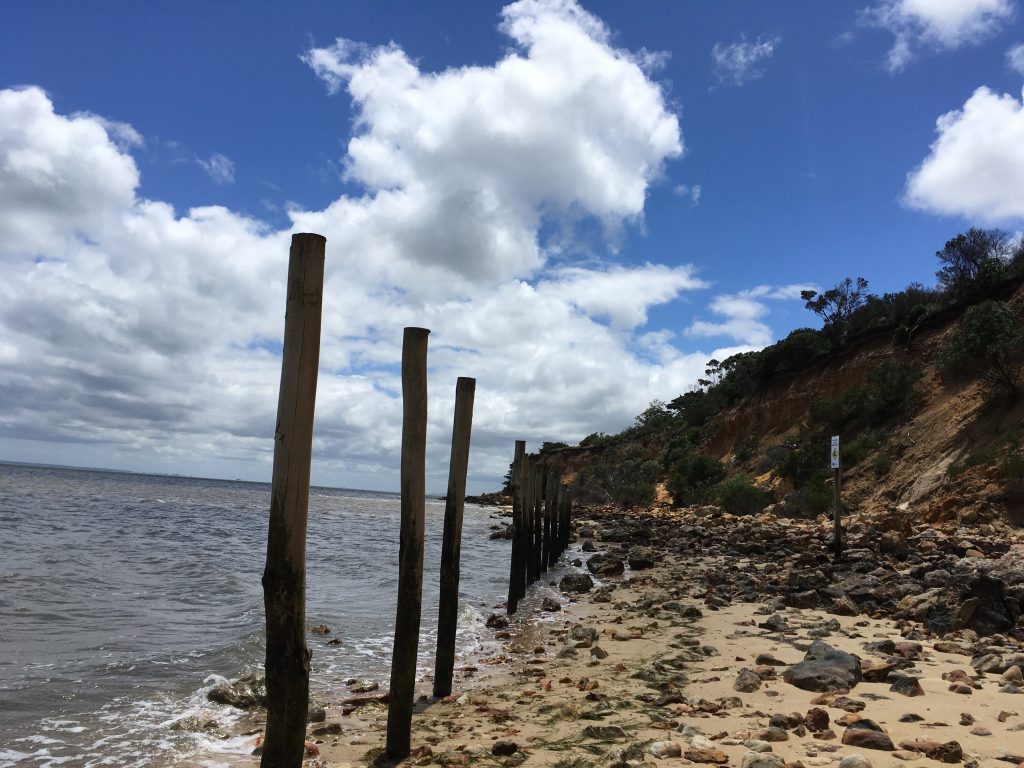 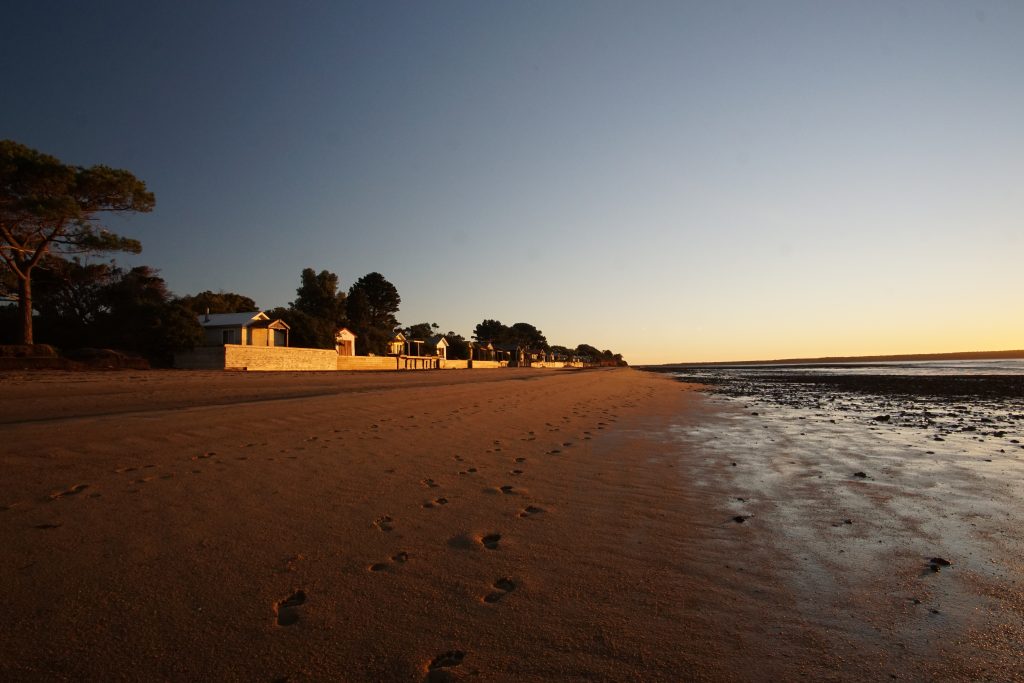 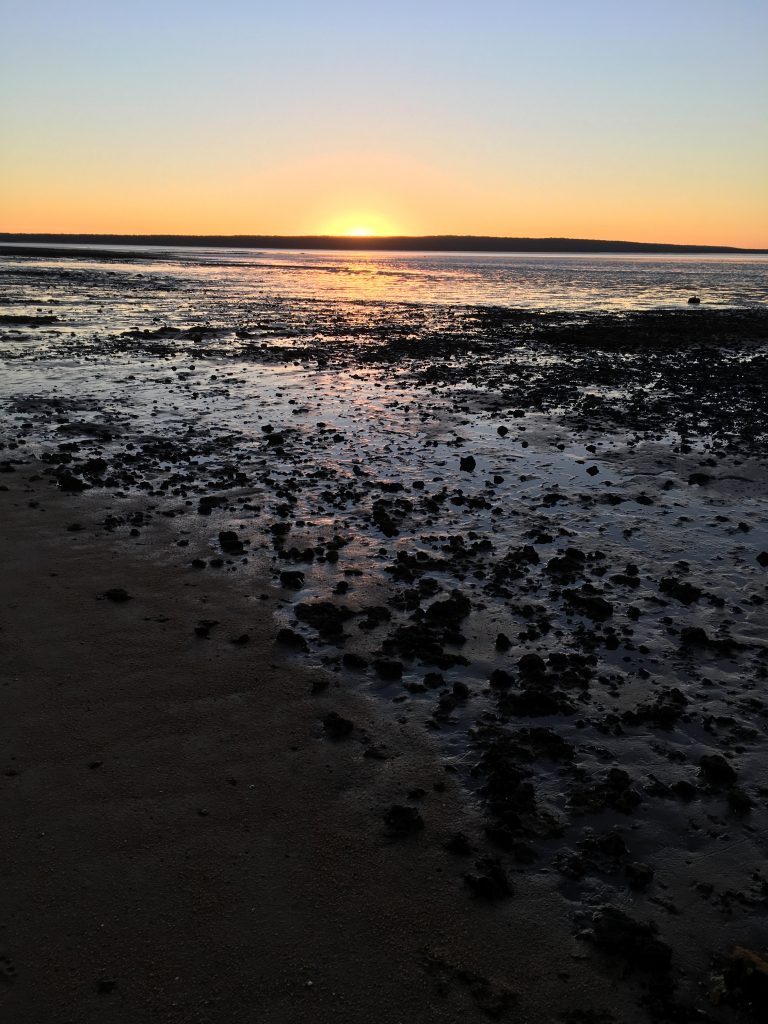 With the yarn stocks replenished, we made our way up to the Dandenong Ranges. Looking forward to having an oven to cook with we did a big food shop, so we could cook up a delicious roast lunch for Christmas.

We got to our cottage, met the hosts and settled in. TV, wifi, a bath. It had it all. Except an oven that didn’t work… Even after I had plugged it in. This was not just our first Airbnb, but we were the hosts first guests too. We called them and explained the problem and all the food we had brought to cook in said oven.

It should be noted that this was Christmas Eve afternoon, we knew options would be limited. The hosts offered to buy an electric bbq with a lid, we said this would do. They lived about an hour away, but delivered it to us later that afternoon. Bunnings to the rescue hey.

Having been a landlord myself I appreciated they did what they could in the circumstances. We got to have roast beef and more importantly N got her cauliflower cheese! 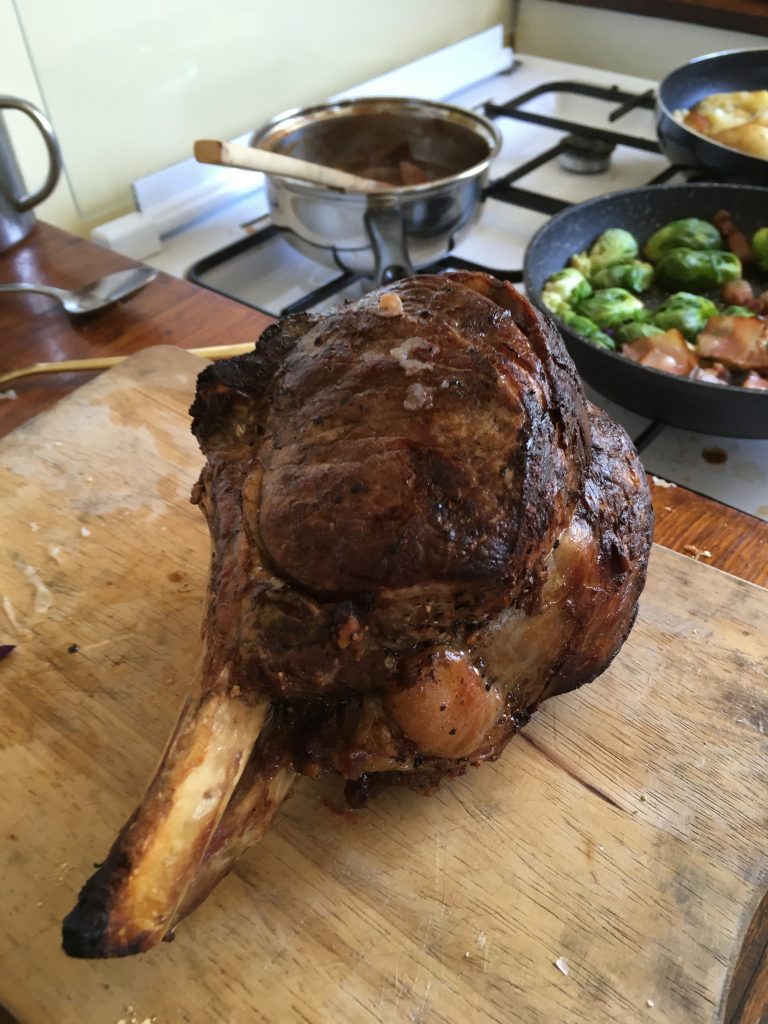 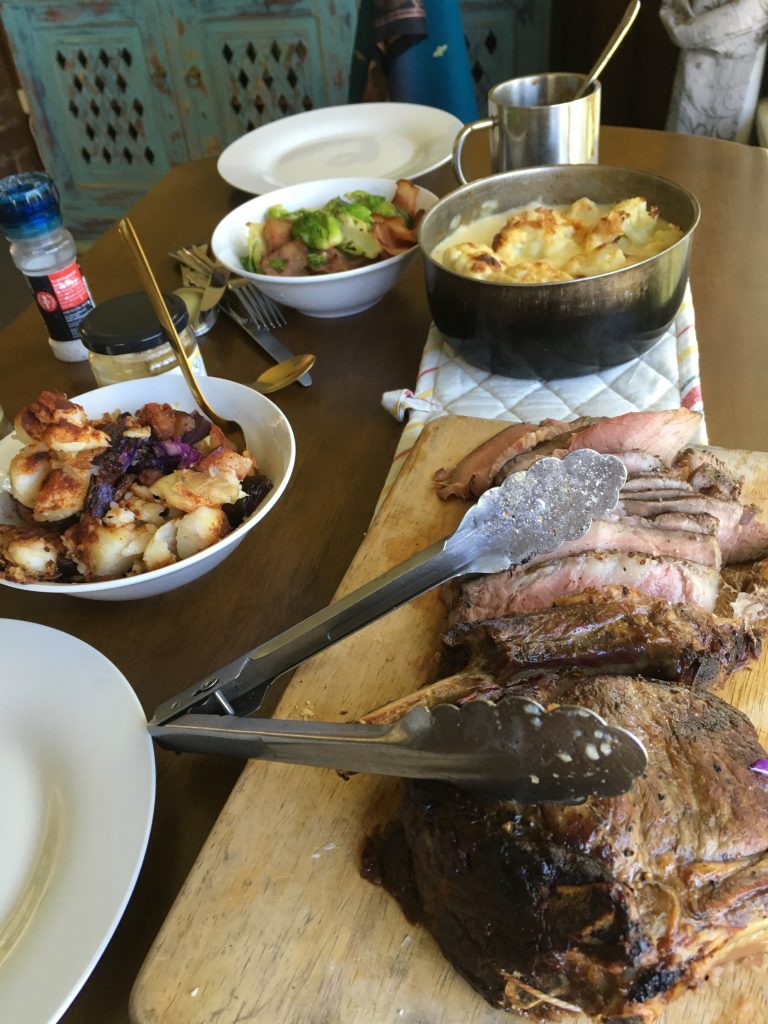 I spring cleaned the Land Cruiser. 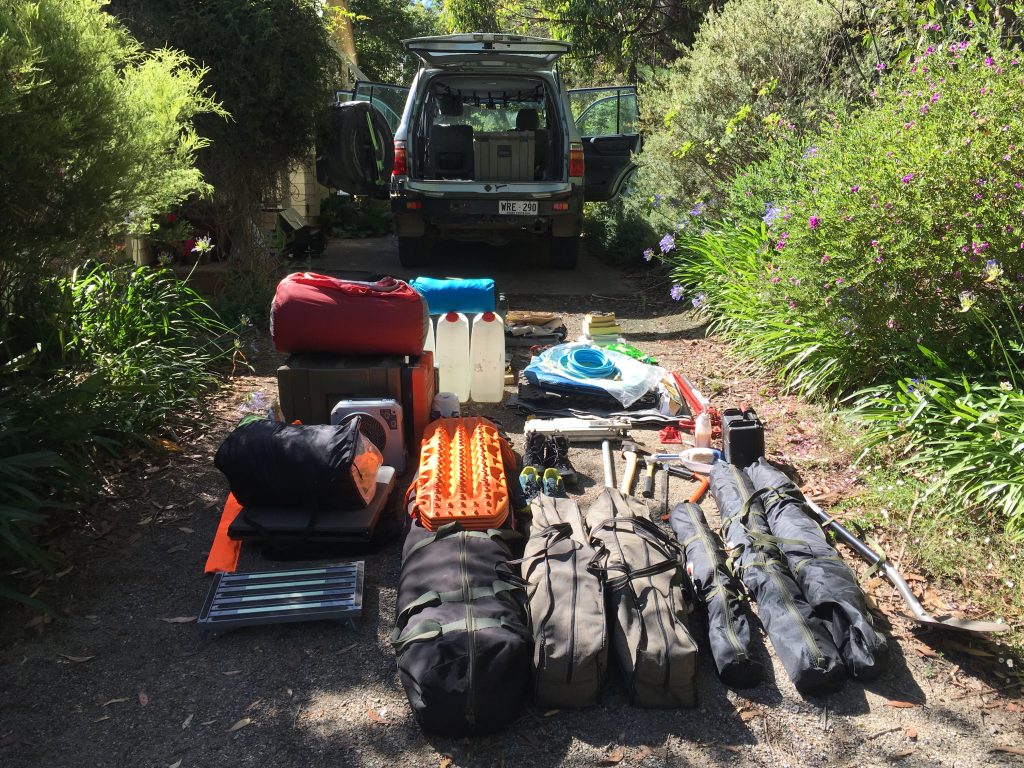 Books, remember those? I’ve read these four so far this trip. This would probably take me about two years to read this many books. 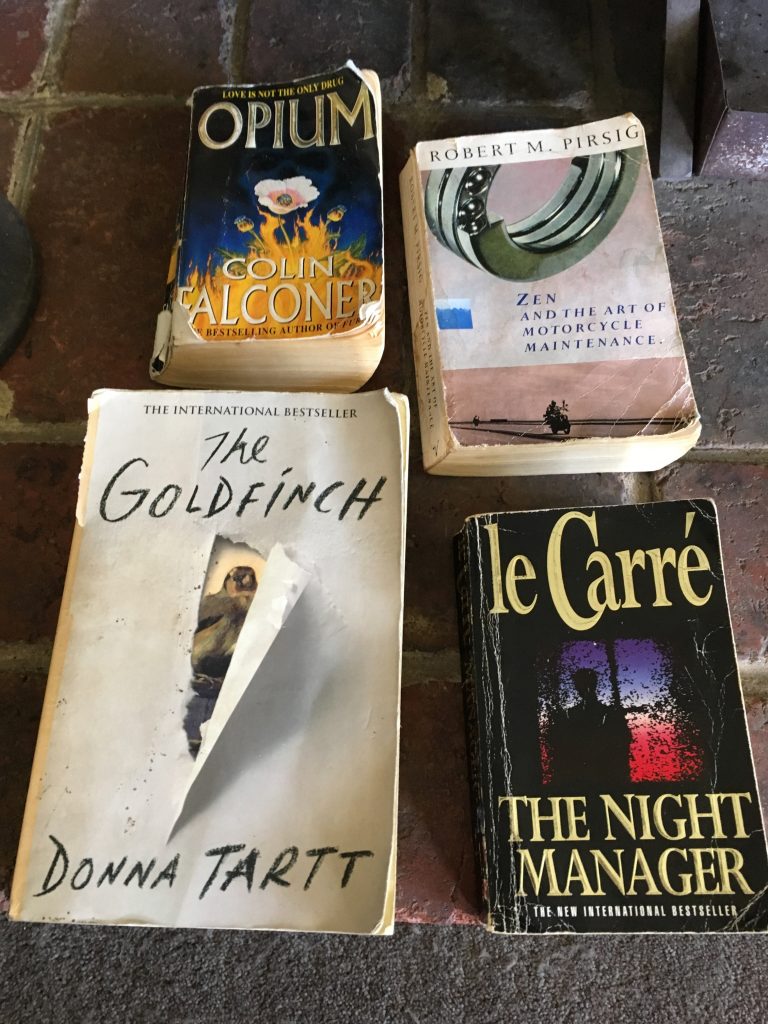 We thoroughly enjoyed our time in the cottage. First stop on leaving was to pick up a new coolant temp sensor from the nearest Toyota dealer. I had called ahead the previous day and to my surprise they had one in stock, probably means it’s generic to a few models. The warning light was on solidly by now, and starting from dead cold in the morning was not a happy affair and needed about a minute of rough idling before you could use the throttle.

We started to push north east, heading back towards the high country. We stopped the small town of Alexandra, and once I’d given it a few hours to cool down I changed the sensor. 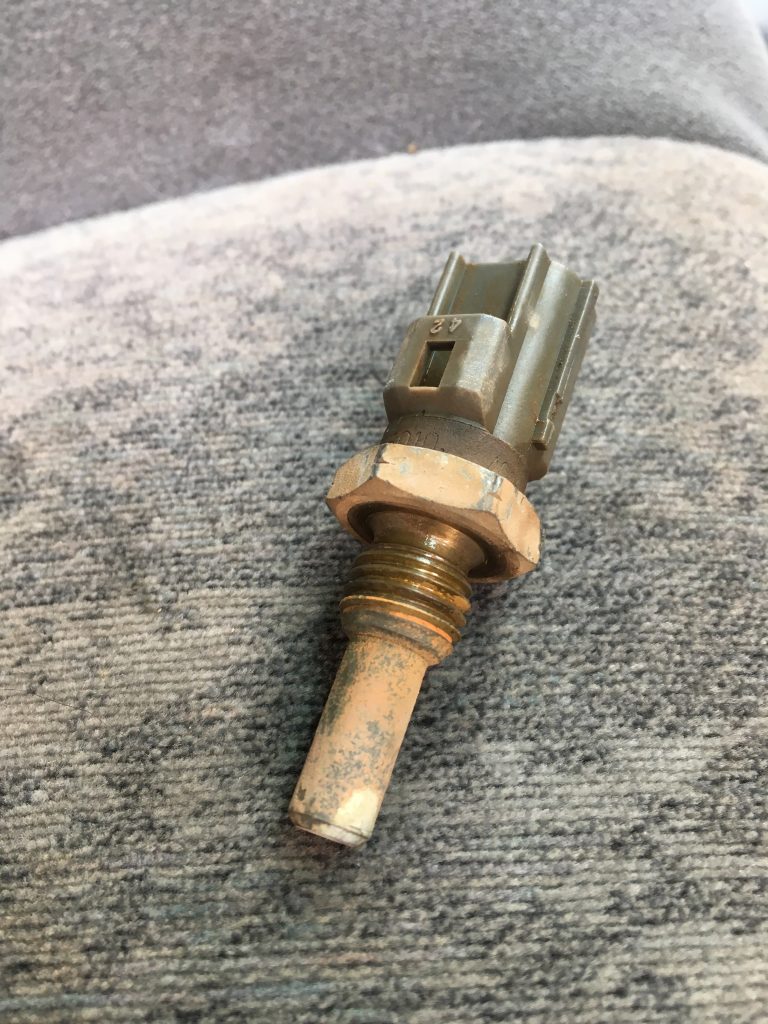 The warning light was still on, but that didn’t surprise me. Leaving the battery disconnected overnight should fix that.

Well, it didn’t. Also the starting was still rough. Hmmm, maybe it needs to go back to Toyota to get the fault code cleared. We drove on, and up into the high country. We knew it would be busier now, but we underestimated just how busy. Literally everywhere we went was packed out. If the Cruiser had been 100% I would have just tried some harder trails to see if we could get away from the crowds. With hindsight I don’t think it would have made any difference, modified 4×4’s are not exactly uncommon in Australia. 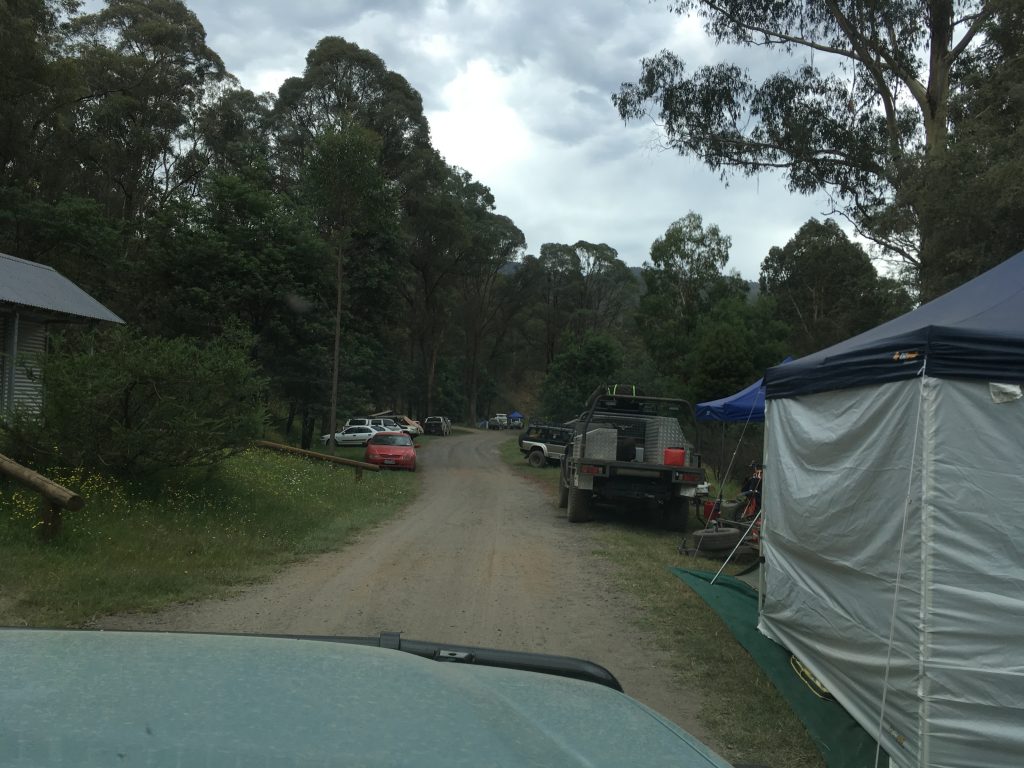 In the end we just went back to the drawing board. We were over the busyness we had encountered pretty much everywhere in Victoria, so we just decided to head for the Outback. It would mean a couple of days of solid driving, but we felt immediately better having made the decision.

A nice $5 campsite that night, just north of Benalla in north east Victoria. Gave us not only a good conversation with an old boy travelling on his own – most of the ‘Grey Nomads’ that I talk to and actually get on with, is because we share a similar mindset in terms of travelling and exploration. Unfortunately this is generally the exception, and many either have no concept of travelling like this, or more likely, just want to tell you how you should be doing it… Anyway, this guy just came over to chat about the OzTent as he’d only recently changed to a small caravan after using his for years. So we talked for sometime, like us he didn’t really have any fixed destinations and was happy to wander far from the maddening crowd. 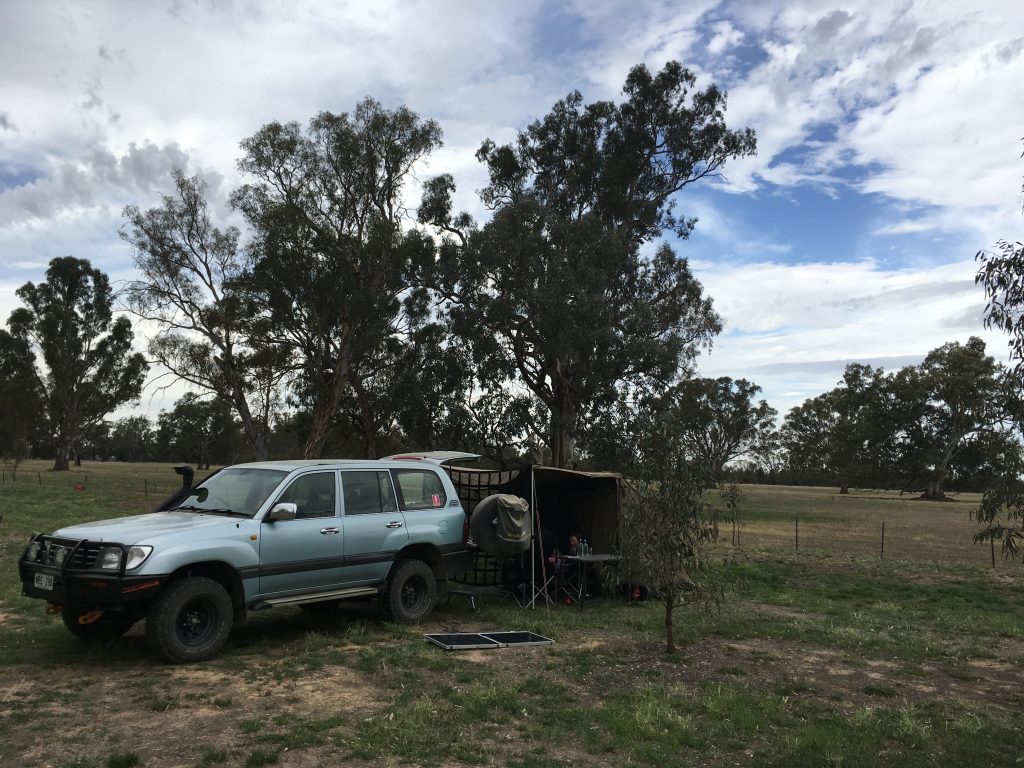 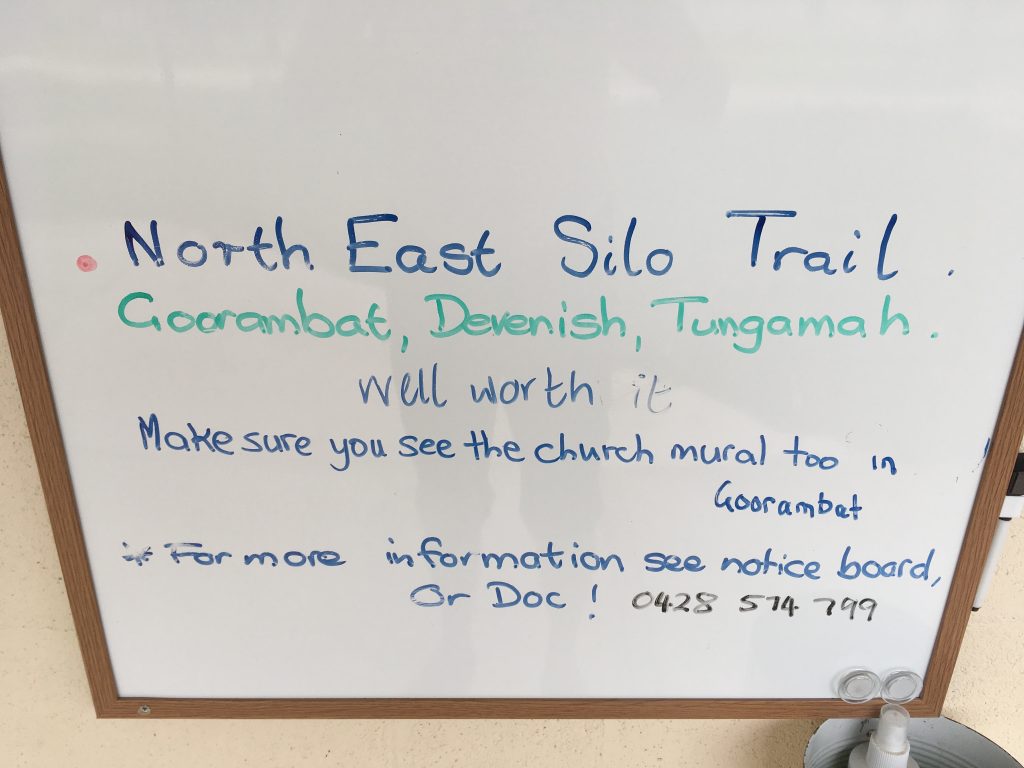 We always like to check these out, so that would give us a nice little diversion before hitting the bitumen properly tomorrow. 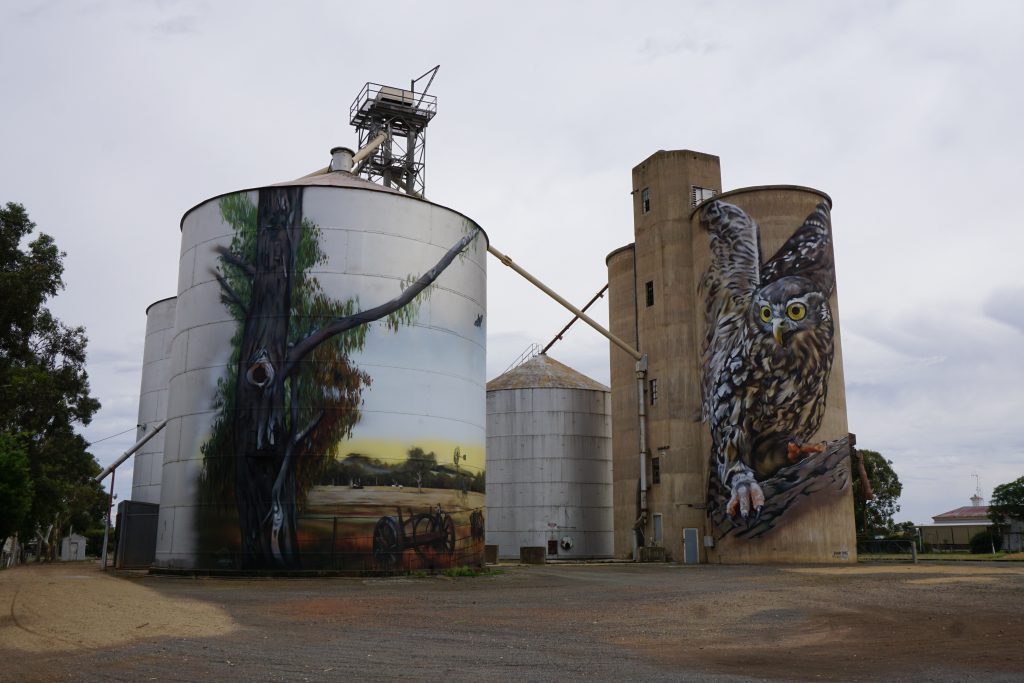 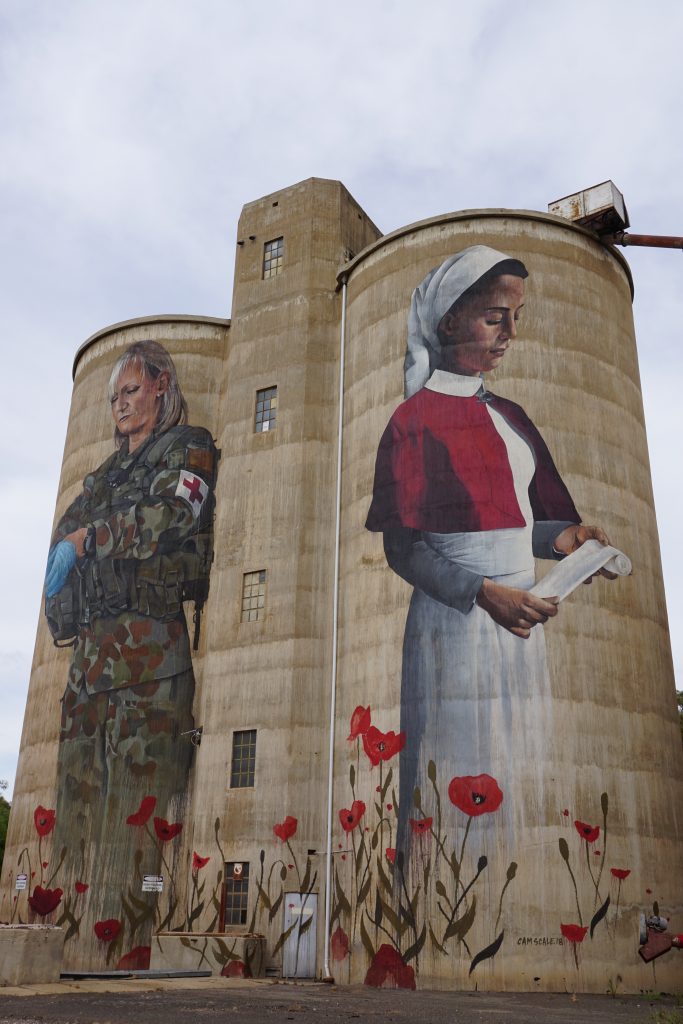 The silo’s were cool. However this mural hiding away inside a little country church was the highlight for me. 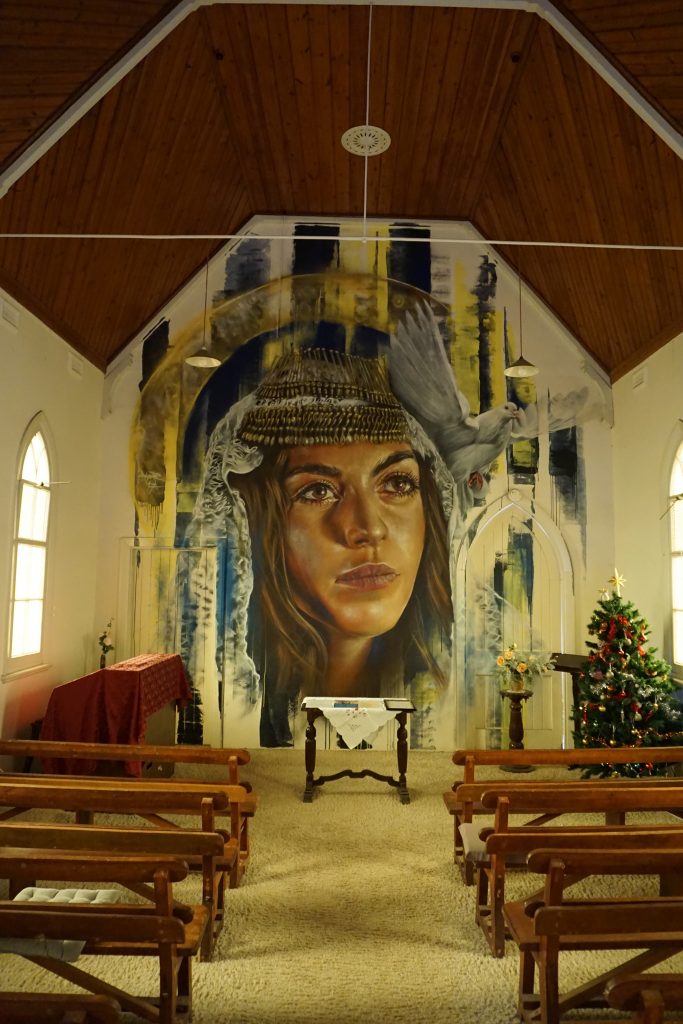 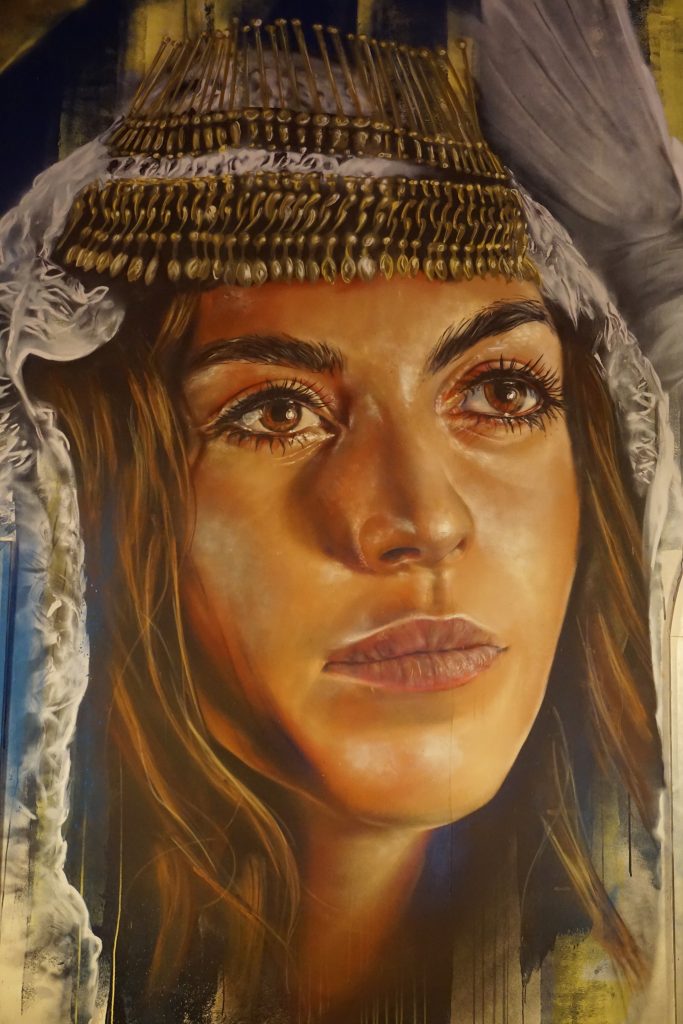 Camped on the banks of the Murray that night. Now we were in the riverland it was just a busy as the high country, but we managed to find a spot to ourselves down one of the many bush tracks along the river.

That afternoon we had literally rain, sunshine, thunderclouds and strong winds all at the same time.

Come the morning Naomi was not in a good way. She had been having intermittently dizzy spells since before we left on this trip, but they had been worse of late, and this morning was the worst yet. I got her to sit in the car while I packed up. We had been going to the local Toyota dealer with the Cruiser this morning. However concerned about this health issue, especially as we were heading to more remote country, I suggested maybe we should head home for a while. At that point we were only about six hours away, the closest we had been or would be for a while. Plus the fact it meant I could sort out what was wrong with the Cruiser, and also a fierce hot spell of weather was due over the next several days.

So, an easy decision in the end. We pounded bitumen, and we were home in time for me to catch up with The Captain for a New Years Eve beer. 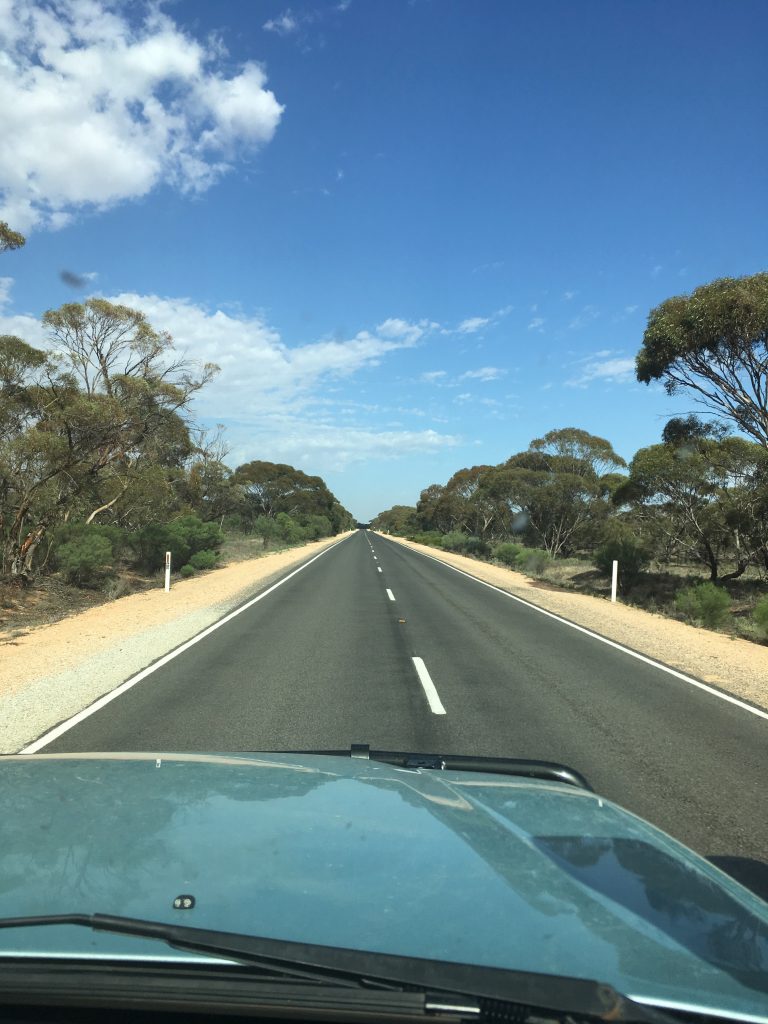 I took the Land Cruiser to my local Toyota dealer. They couldn’t clear the fault code and said the ECU was reading minus forty degrees – indicating either an open circuit in the wiring, or a fault with the ECU.

I tested part of the circuit and couldn’t get continuity. Hmmm… It’s hard to test it accurately on your own, so once The Captain was available we tested the circuit properly and sure enough it was open from the sensor, the rest of the circuit checked out. So I started stripping the sheathing back and sure enough the wire was broken at the connector. Impossible to see in position, but a relief to positively find an issue. We went and clipped a few spare connectors off Toyotas at the local wreckers, soldered on the best one and put everything back together. Truck started up great and the fault light was out. Awesome. There are a couple of less pressing jobs that I may as well do before we strike out again.

While I had some time on my hands I made these maps. The first one is our significant trips up to getting the Land Cruiser. Blue and white line is our original Ford Falcon wagon. Green and white is our beloved Range Rover LSE. The red line is the one and only trip we did with our Mitsubishi Pajero, where we got stuck in the sand for four hours, bah bow. 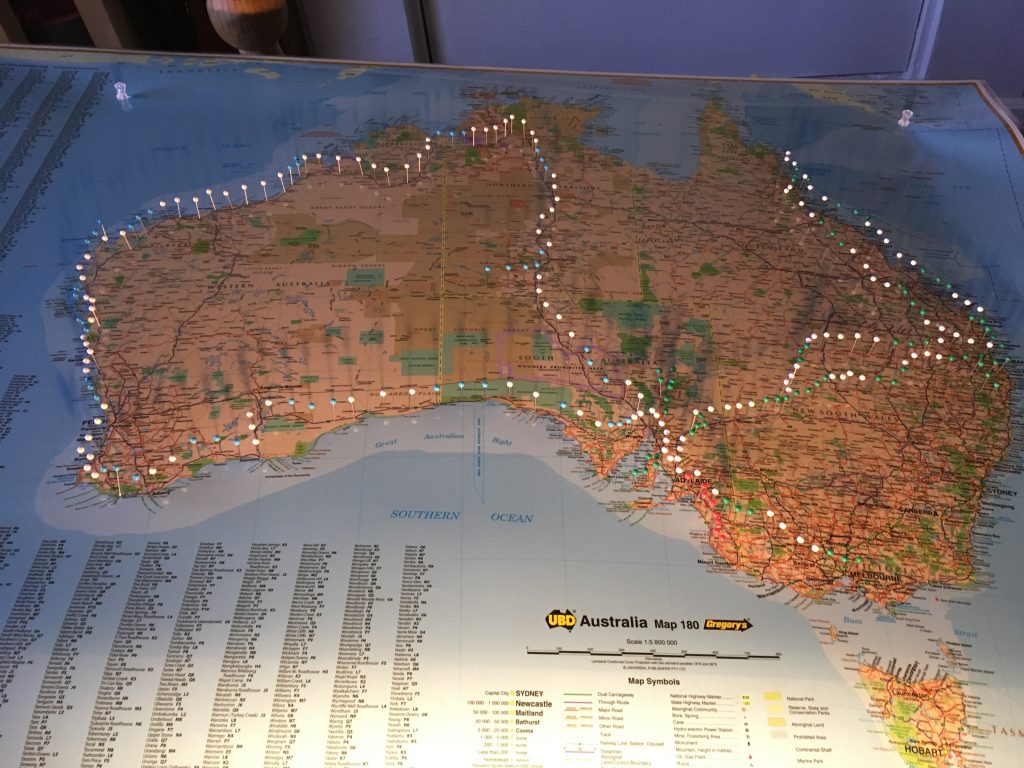 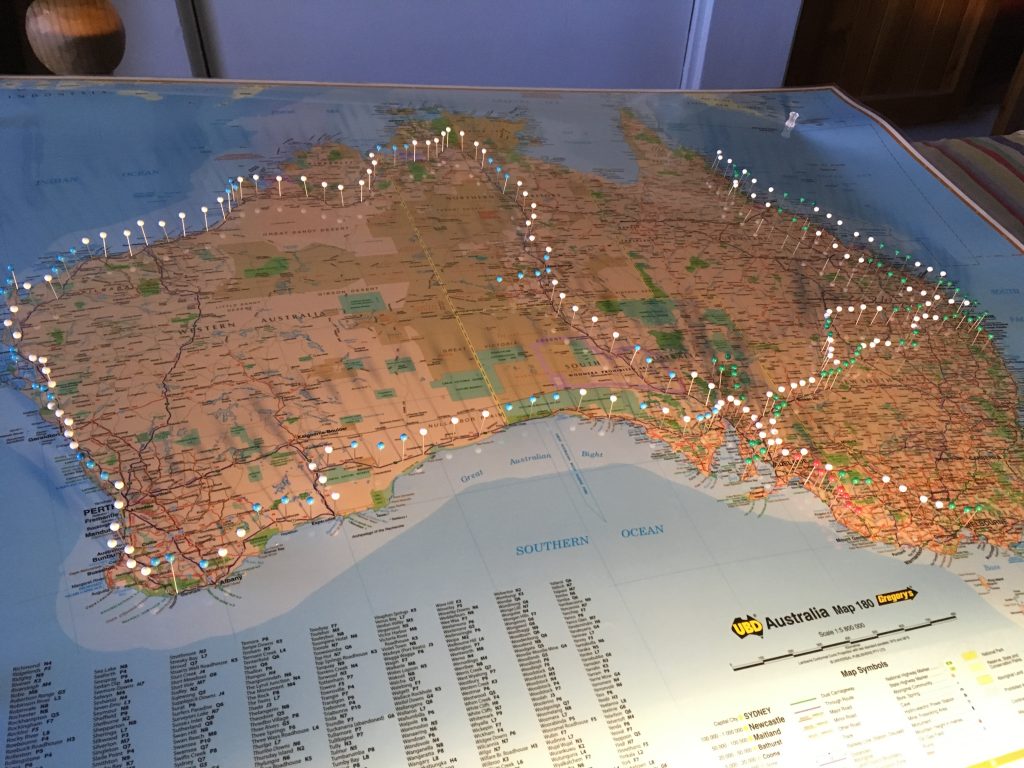 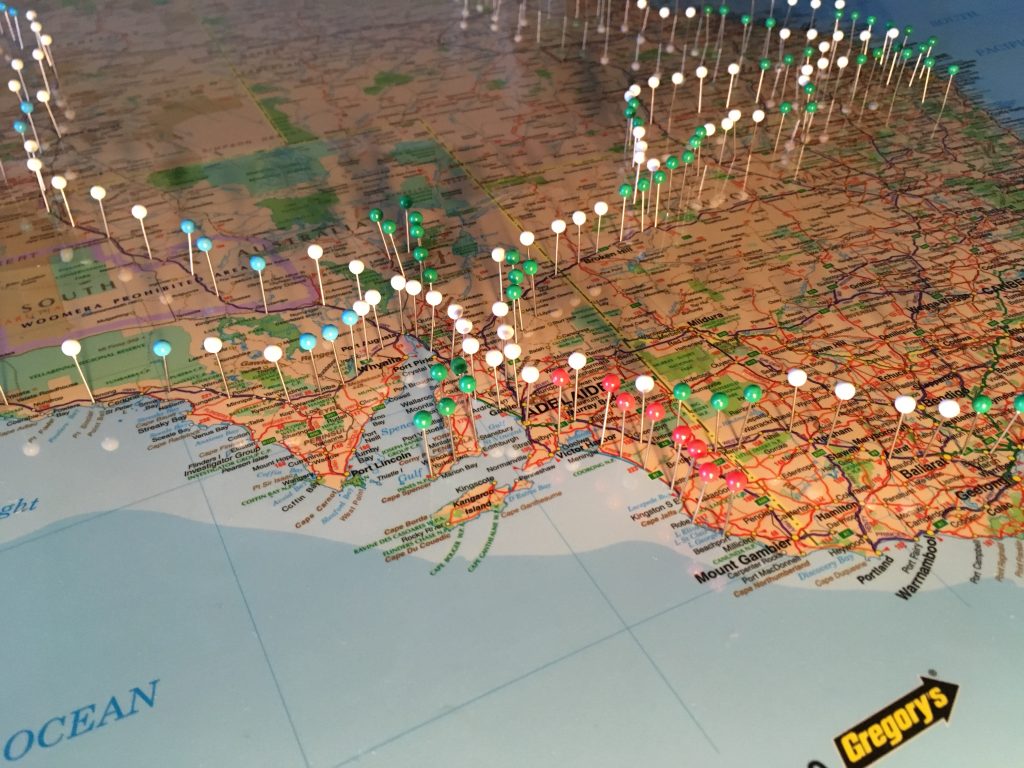 The second map is the significant trips we’ve done with the Big Blue Bertha. The blue dots denoting location highlights. 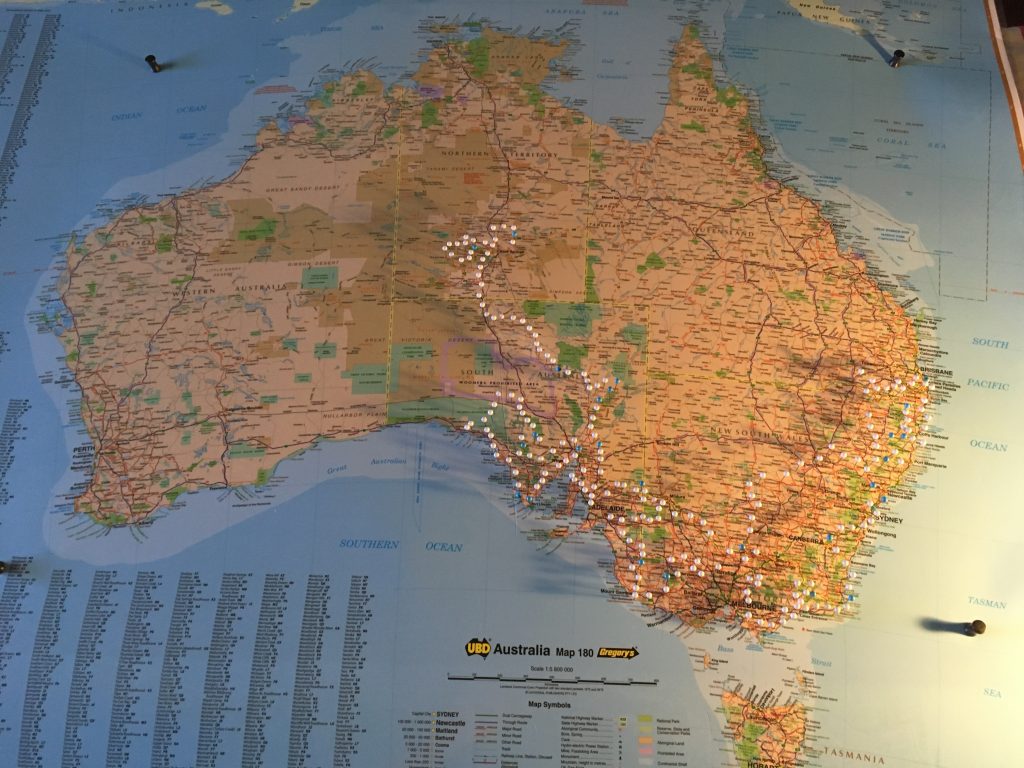 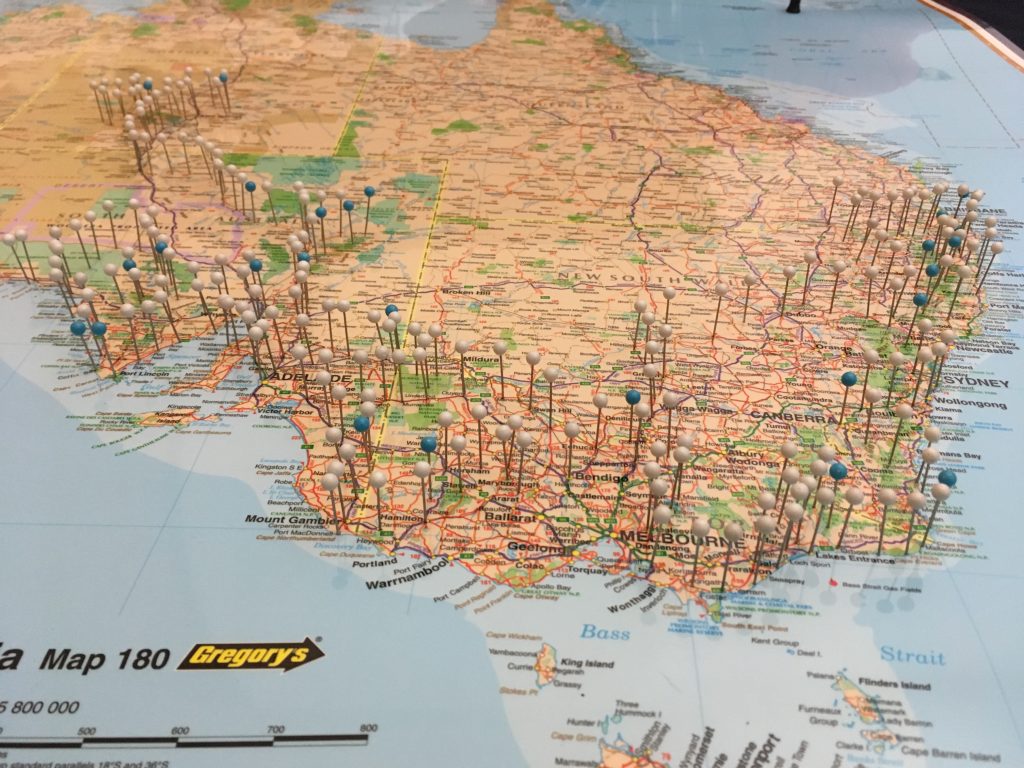 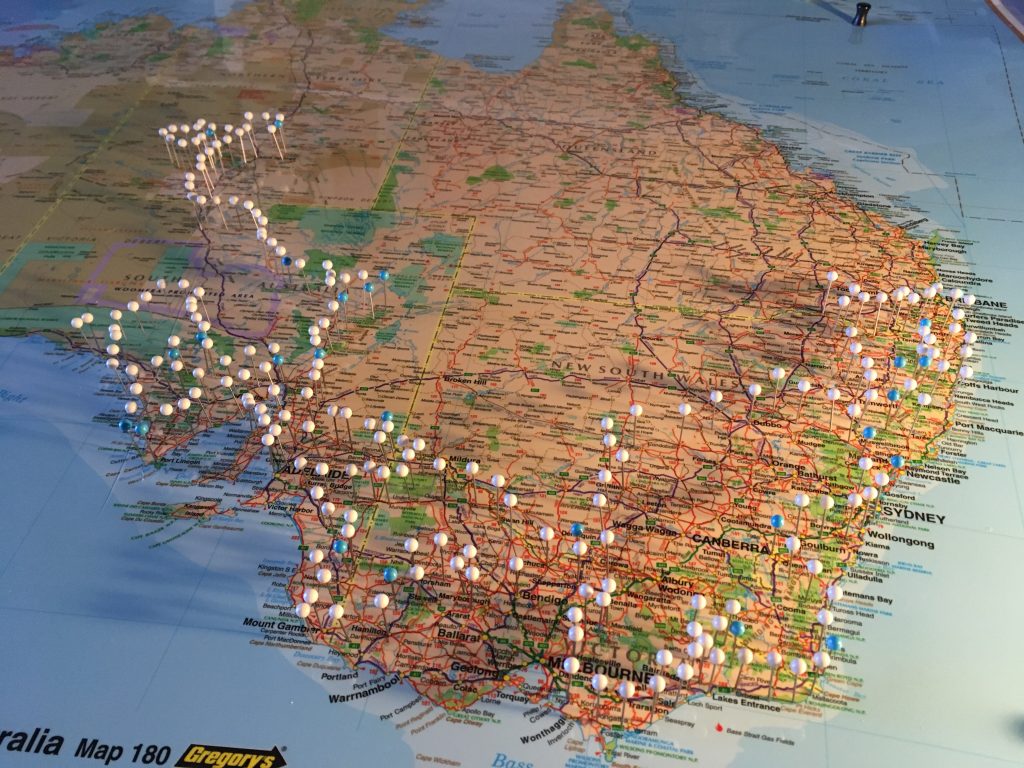 Thanks for reading. Hopefully we’ll get everything sorted and back on the road soon.