AWOL Around Australia… The Kimberley. Part 2

We stopped in Kununurra for a couple of nights. Not much got done that first day as we were somewhat bushwhacked after the last few days exploits. First night was a bit wild, with a carry on all night and the sound of someone determinedly trying to break into the local shops (no shops have exposed windows overnight).
The park manager said that was a particularly bad night and probably people from out of town, coming in, getting carried away and trying to trash the place. Next day the town carried on as normal. Kununurra is the main centre for the East Kimberley region, and when any local around here refers to ‘town’ this is where they mean.
Seems the manager was right as the next night was far more normal.
I evacuated as many grass seeds from the radiator as possible. 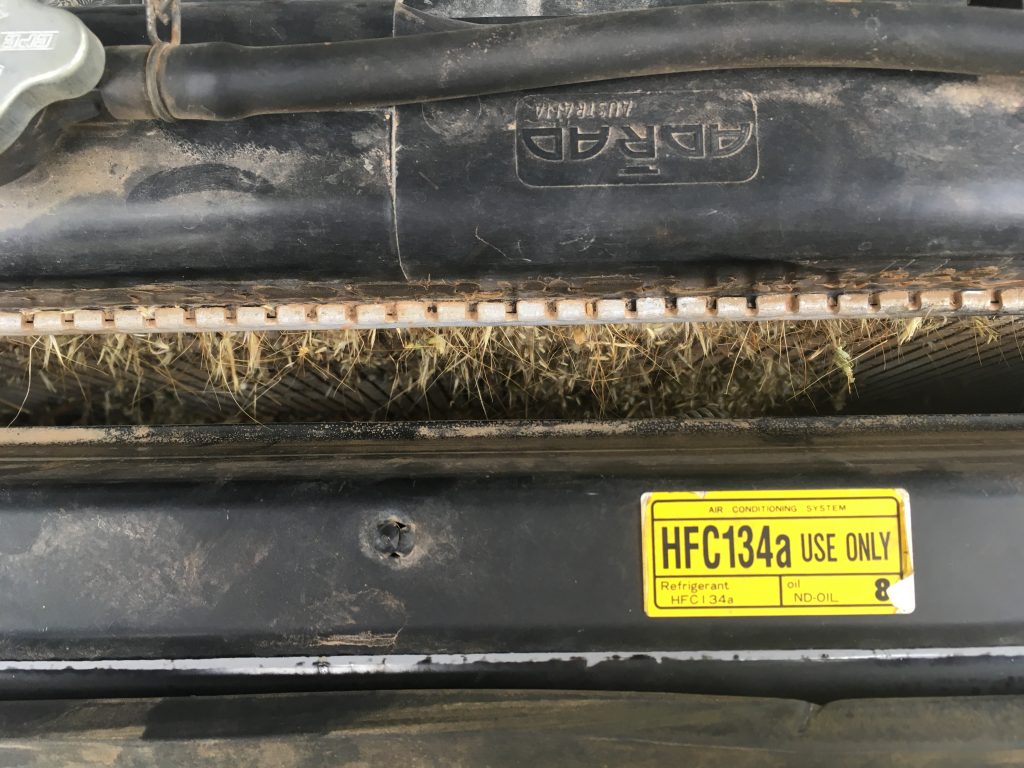 Running an air line from the compressor got rid of some, but a micro fibre cloth on the end of a long screwdriver was by far the most effective. Plus another good check over of the Cruiser. Reliability would be as important as ever, now we were be in the north of Australia for the foreseeable future.
Fish and chips from ‘The Barra Shack’ that night. Barramundi is a great eating fish in the north where it can be caught fresh and large. Not so much in the rest of the country where it is either frozen or farmed. 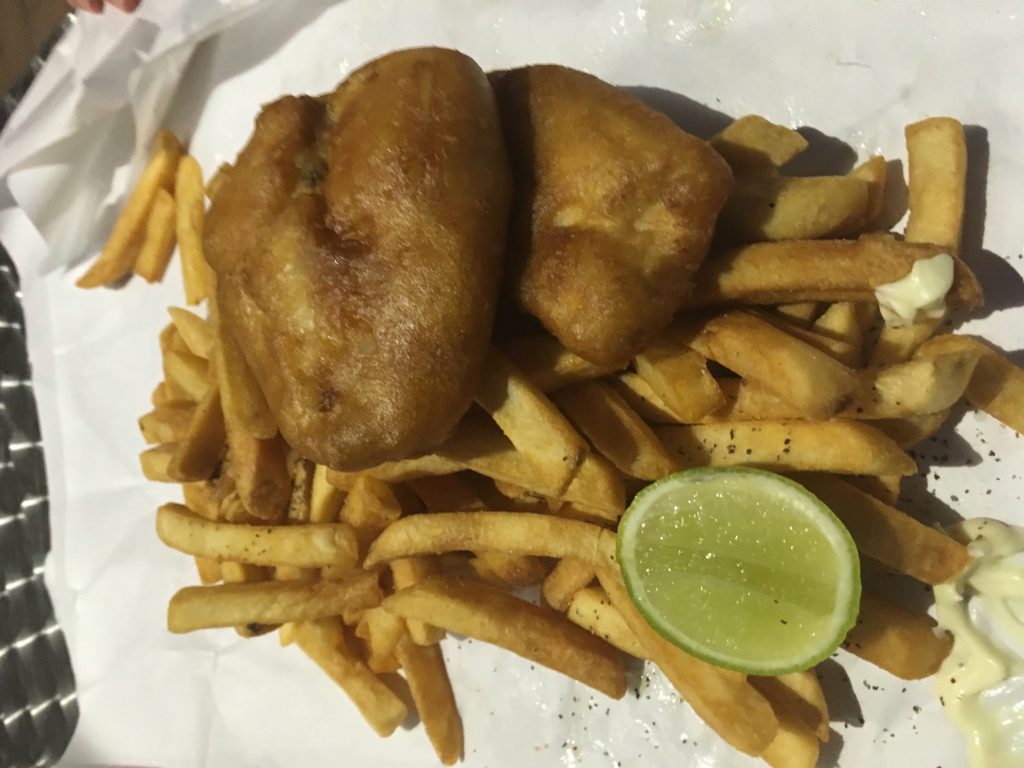 Time to hit the road. The road to Kalumburu should be open by now, so we can take a nice easy two days to get there. Or not. 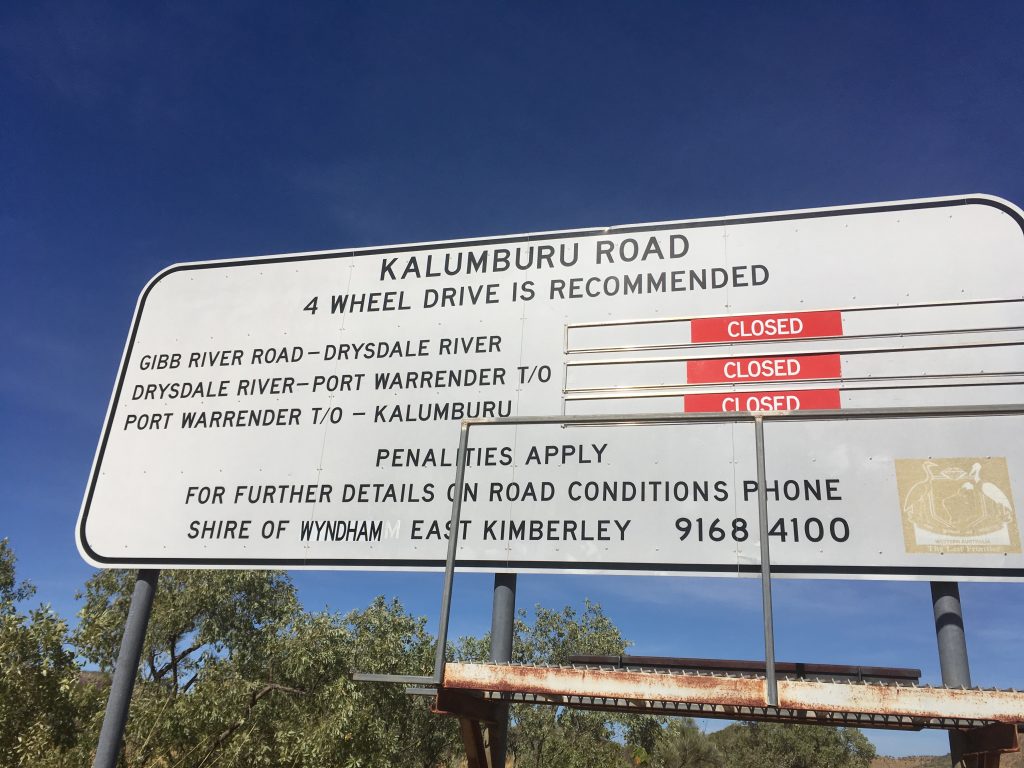 Hmmm…
No phone reception here.
There are many properties and places to stay along the Gibb River Road, nearly all were shut this early in the season (or really late in the wet season according to the calendar). However I knew El Questro was open, and only a short drive from this eastern end of ‘the Gibb’. We can check local advice there, and make a plan. If not, I can get on the sat phone.
El Questro is by far the most slick and commercial operation in the Kimberley by all accounts, so I guess it shouldn’t have been a surprise when we got there to find out there was 3G phone reception. So I put a call into Main Roads WA. Who advised they had no road closures, but advised they couldn’t help with smaller, shire roads – makes sense, the clue is in the name… Feeling a bit thick I googled the local shire office and called them. Yep it’s definitely shut, no information on when it will open, they’ve had rain up there. Please check back on the roads page of our website for the latest updates.
Rightyho. Might as well book in for a night here. I was planning to spend a few nights here on the way back anyway. Let’s see how tomorrow (Friday) pans out, if it’s not open then it probably won’t open till after the weekend. No worries, we can spend our nights here now and head out Monday.
So that’s how it played out. Plenty of people bag El Questro but (crucially) at this time of year it was a great place to kill a few days. Easy but scenic 4×4 trails planned out for you. Someone else to cook. Happy hour. DJ playing Toto – Africa on Saturday night! Reminding me of our mates Venturesome Overland who named their African touring Land Rover after that song.
Some shots from our time there. 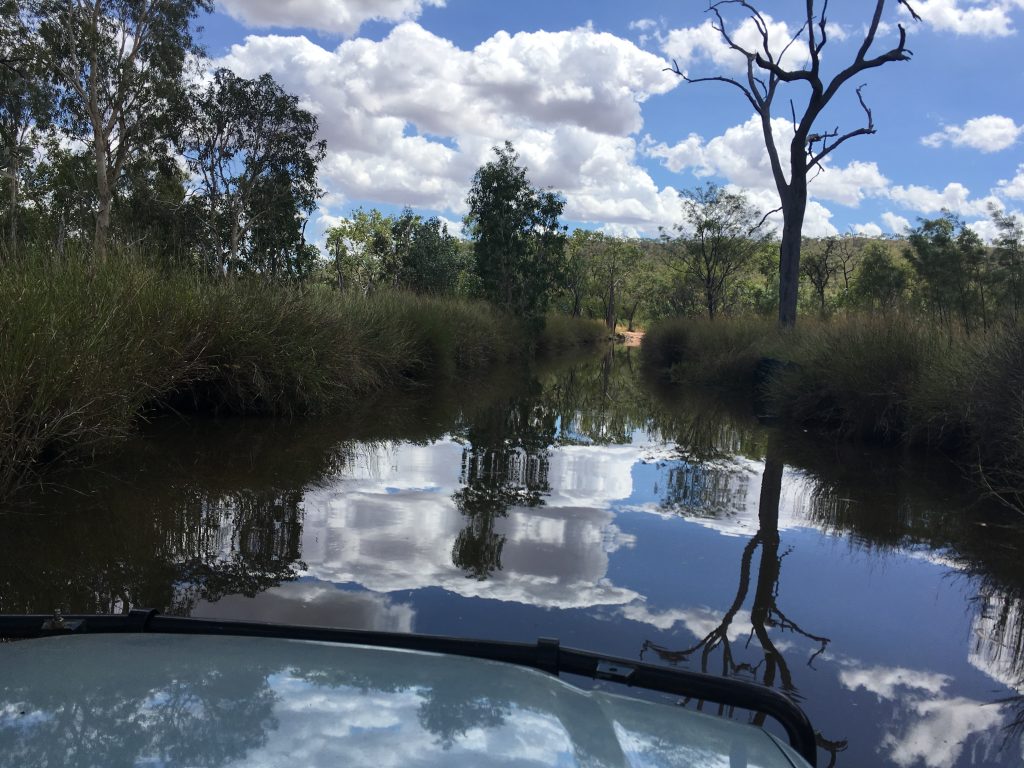 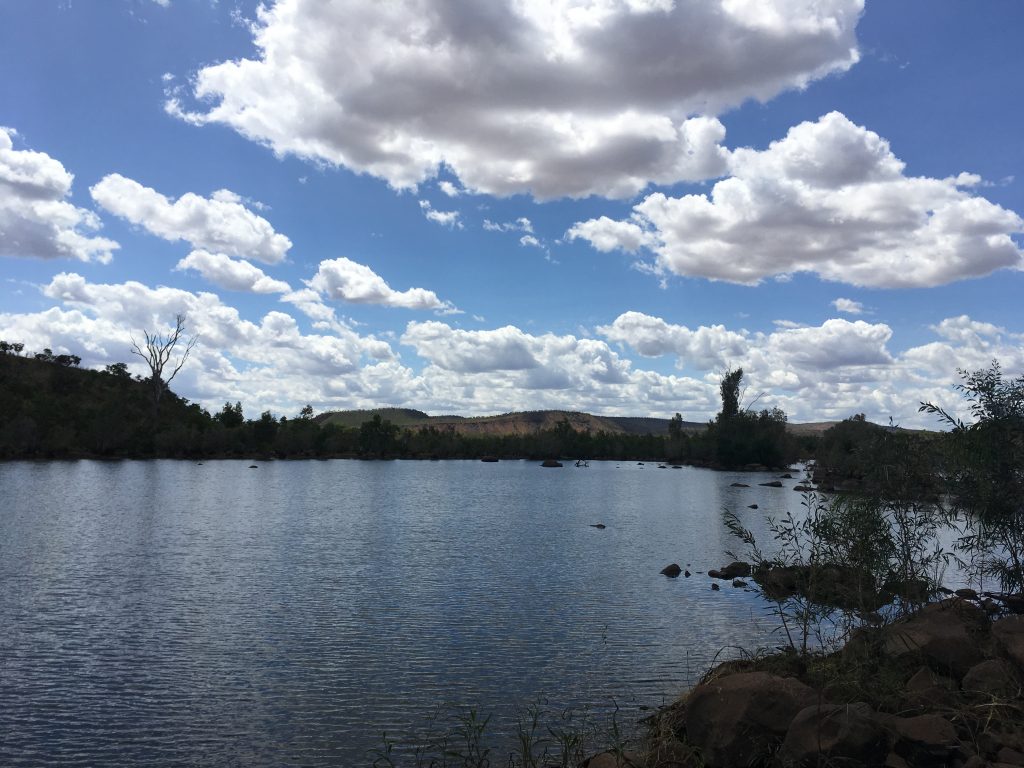 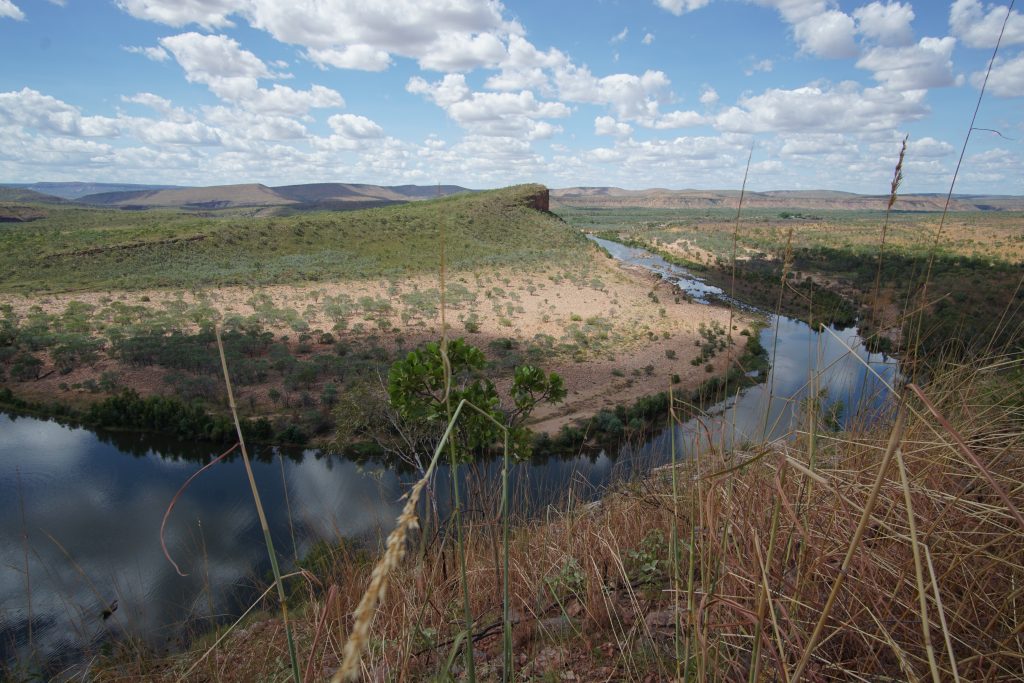 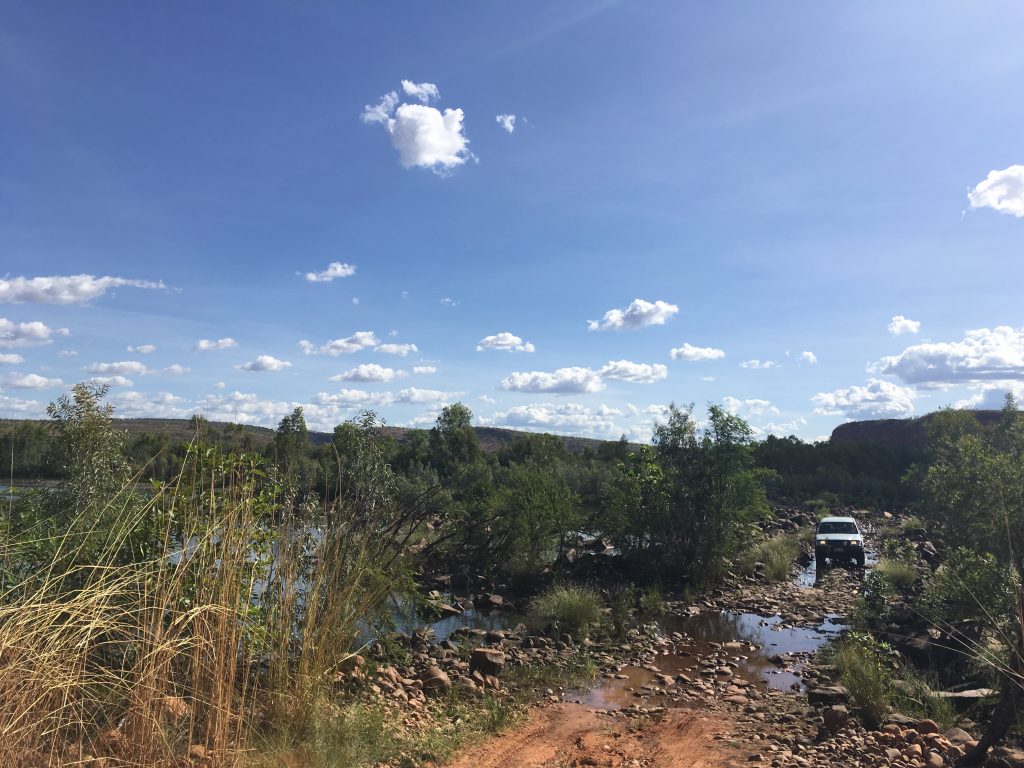 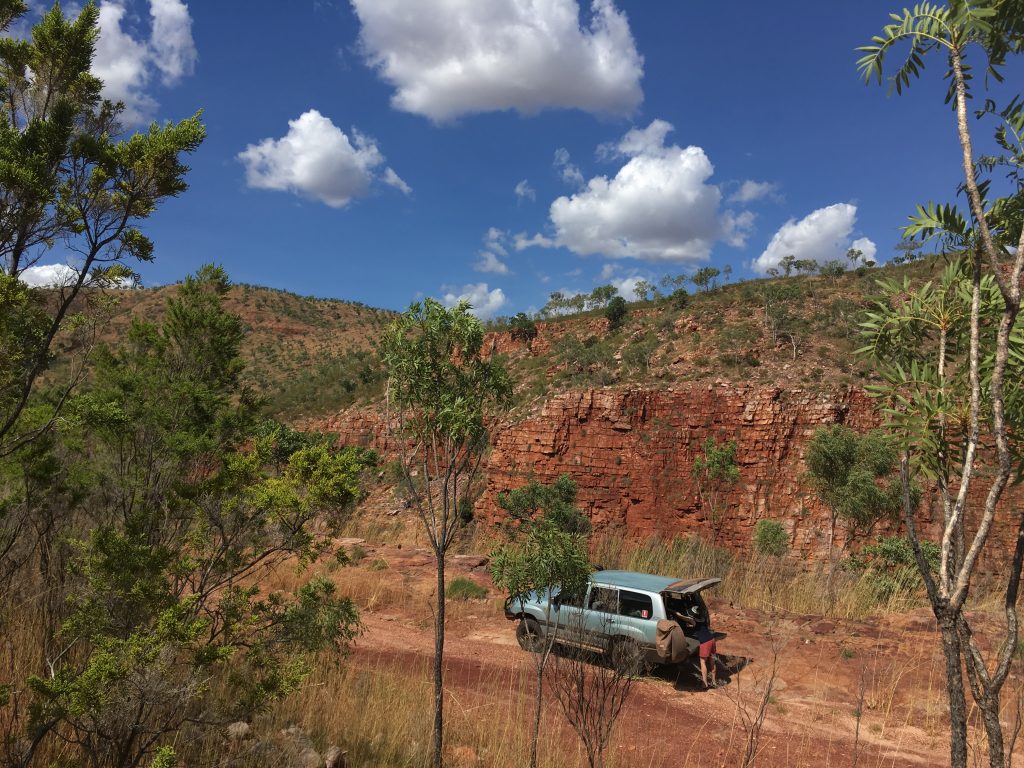 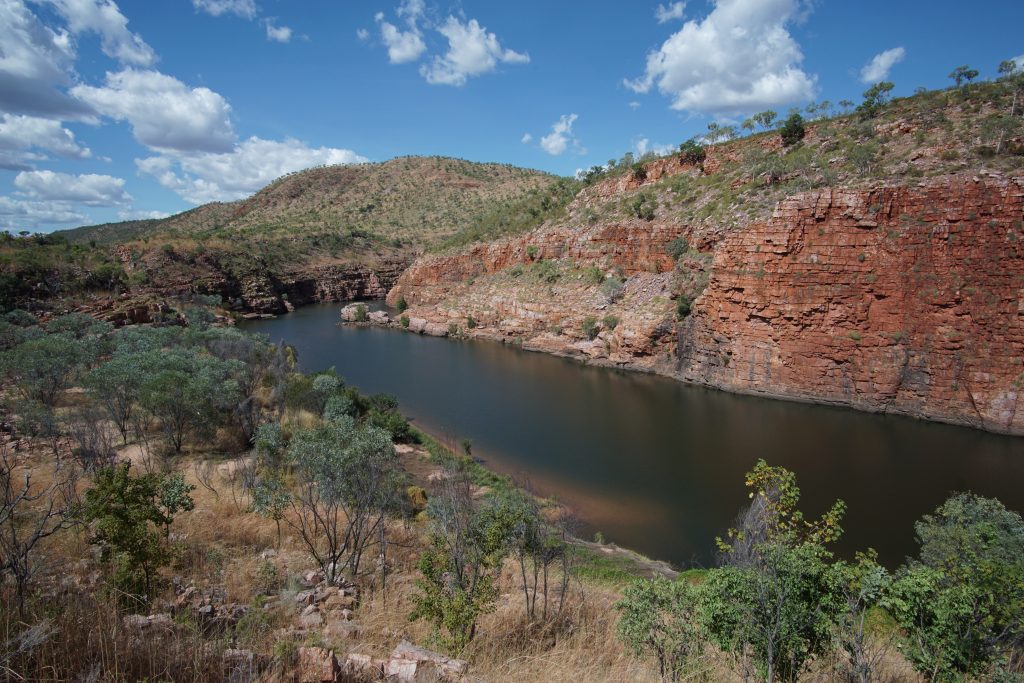 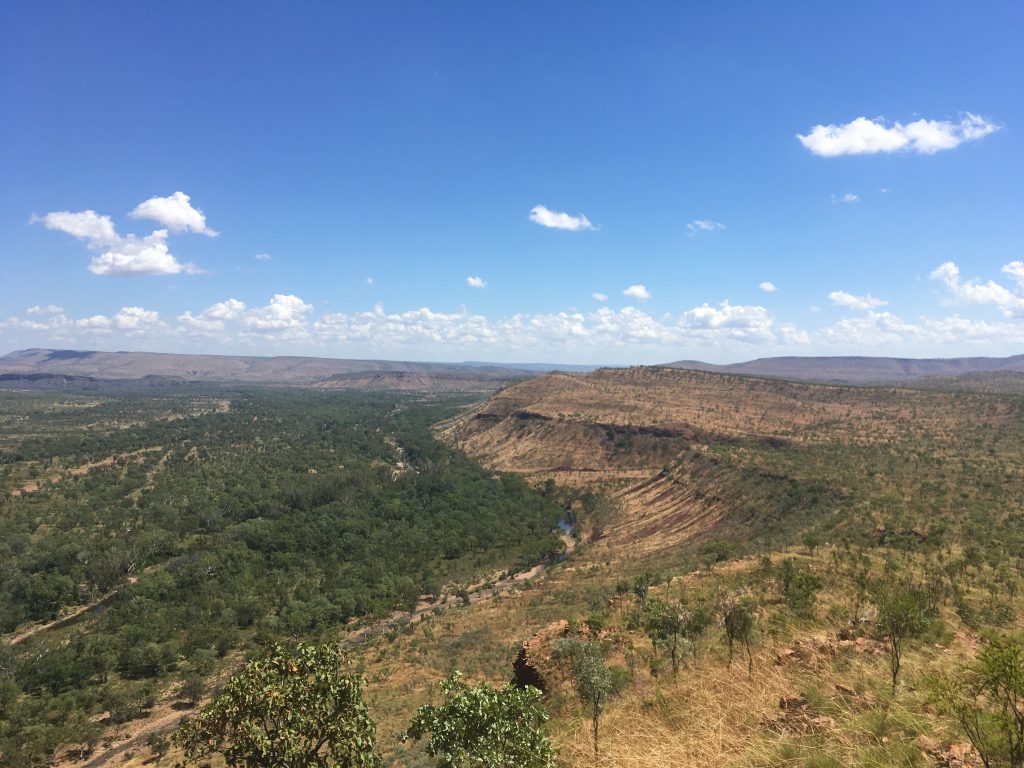 There are no real challenging tracks at El Questro. However, about half the 4×4’s we saw were hire cars, so better safe than sorry with the signage. Not to mention there are plenty of people with tricked up 4×4’s who haven’t done much off road driving, as N was chatting to the couple in a 200 series Cruiser who did this hill after us and they said how challenging it was, lucky N didn’t mention you could clearly see where the grader had been up it… 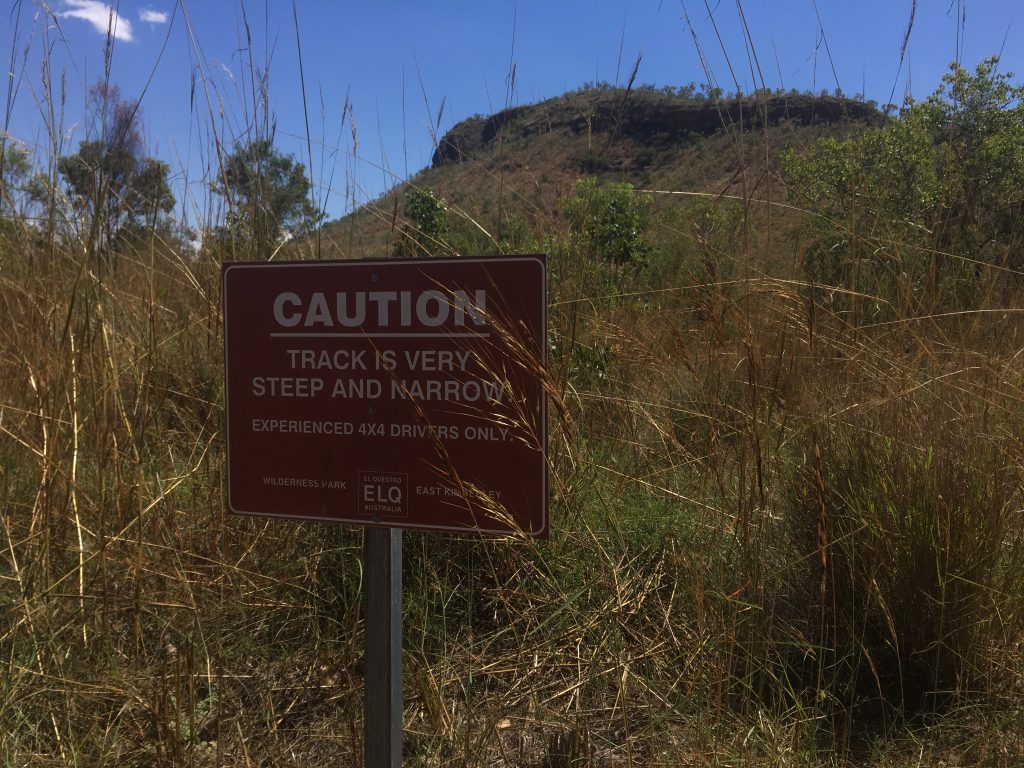 The below track was the only on that was really off road, loose and rocky, we did bump the rear bar coming down it but coming back up (where it is easier to see the line) I could see I just picked a poor spot to drop off, I had a good reason for not getting out of the car and looking first I might add! 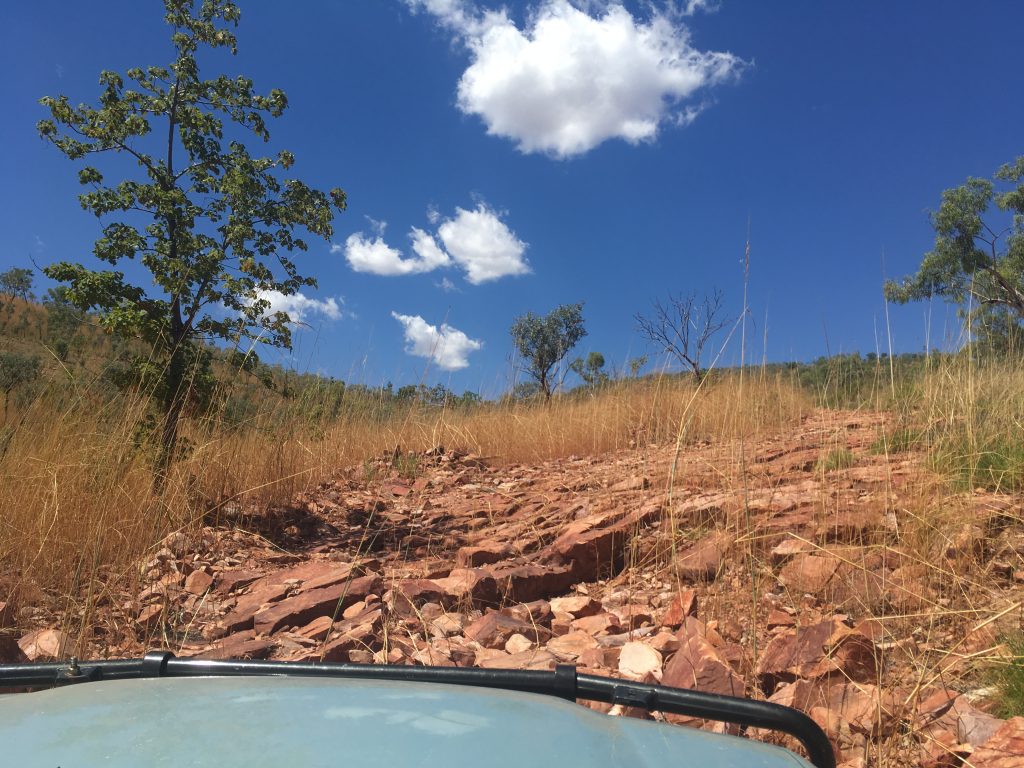 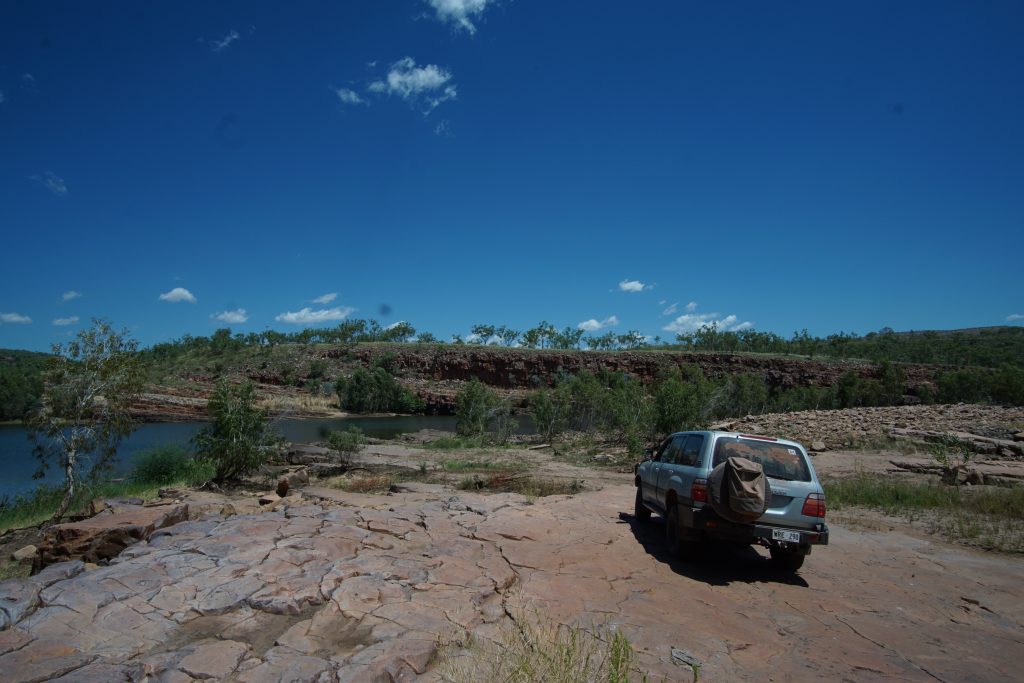 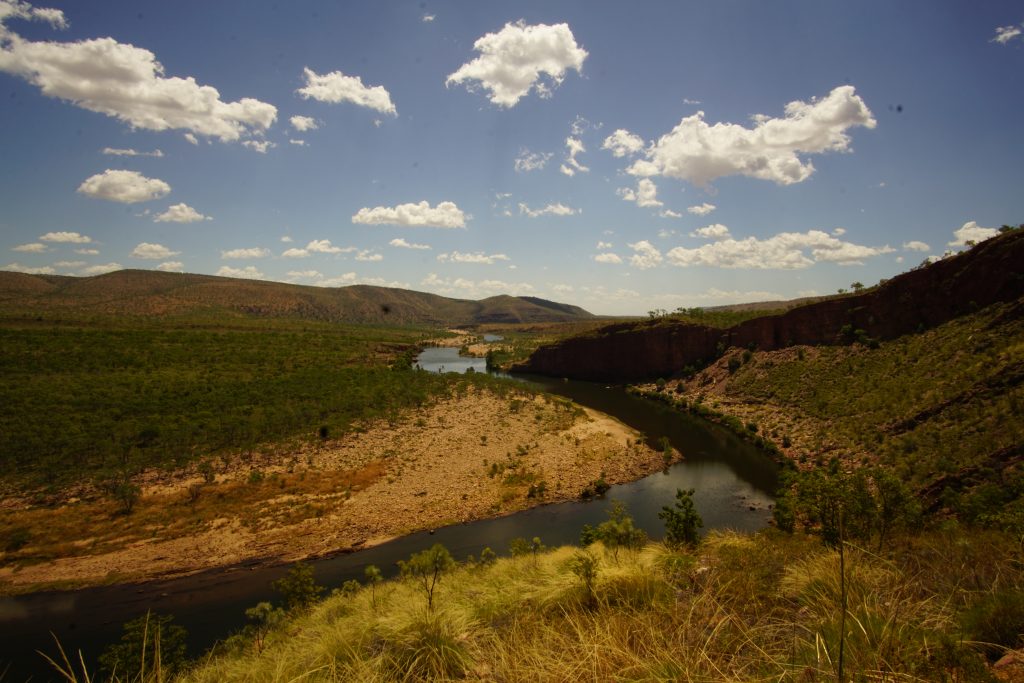 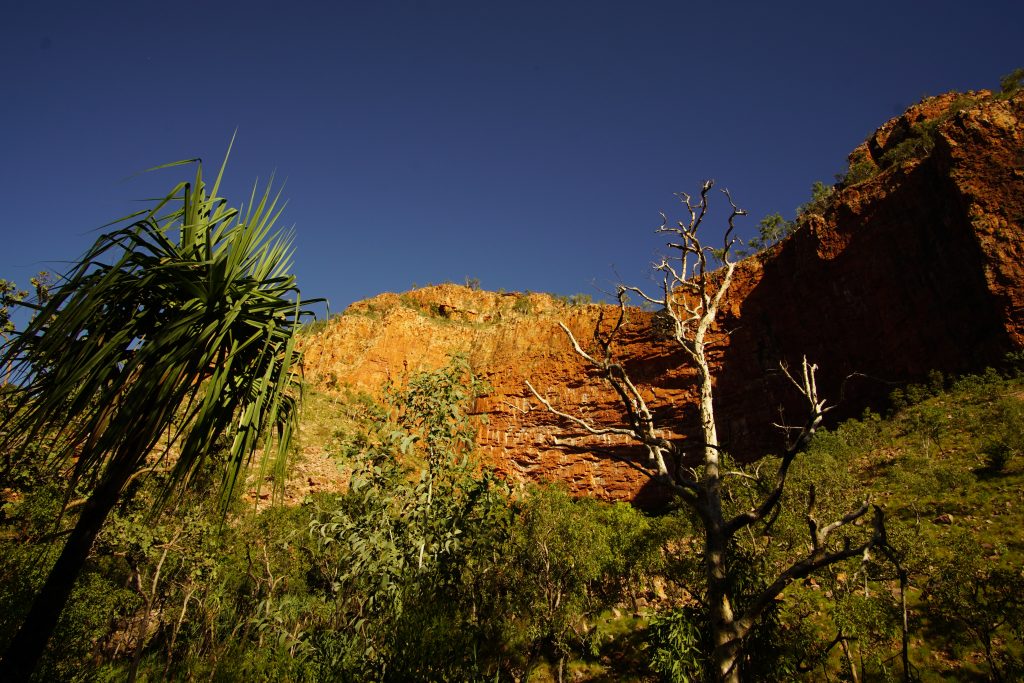 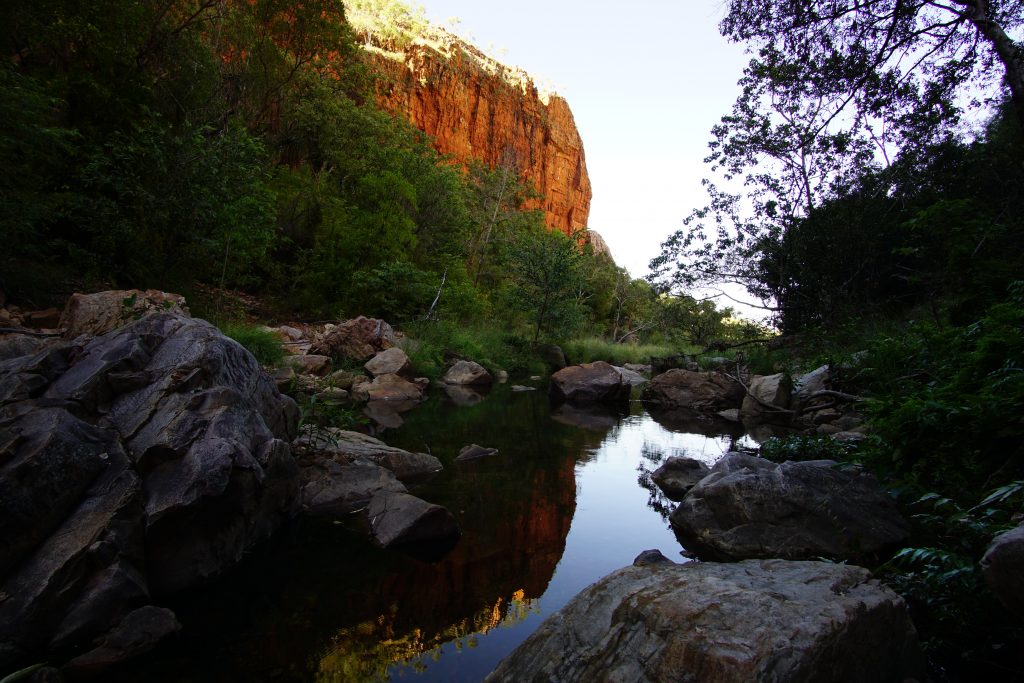 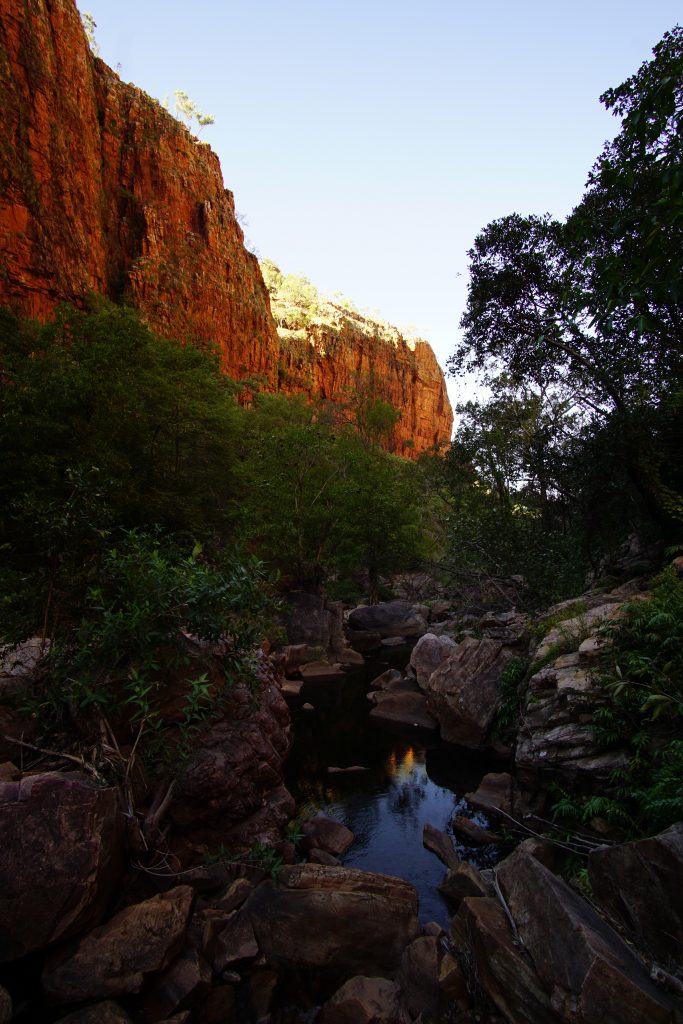 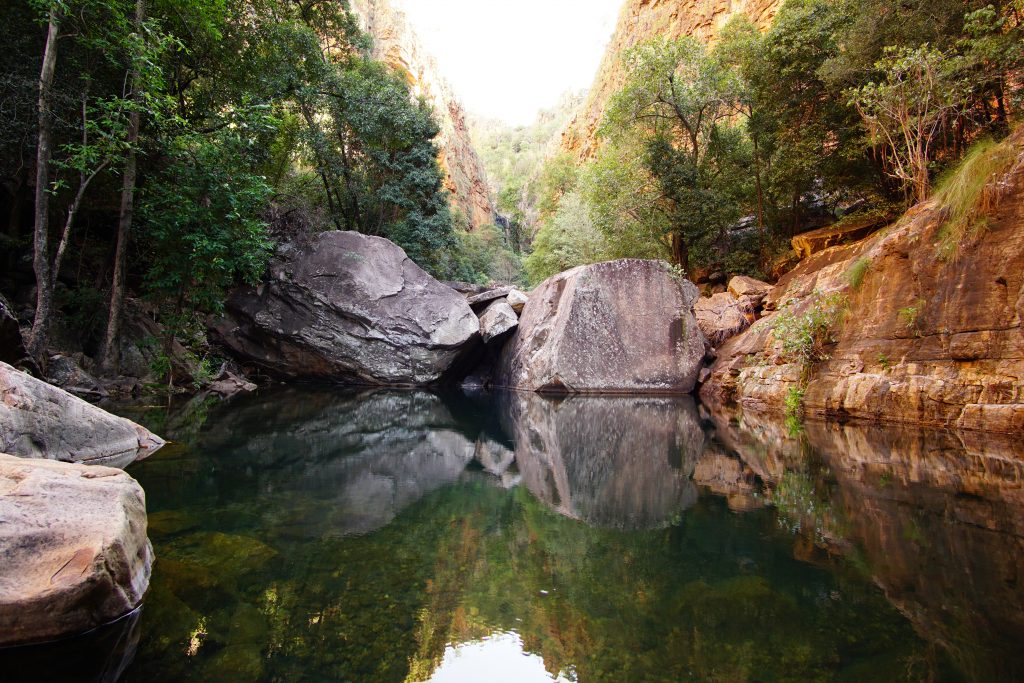 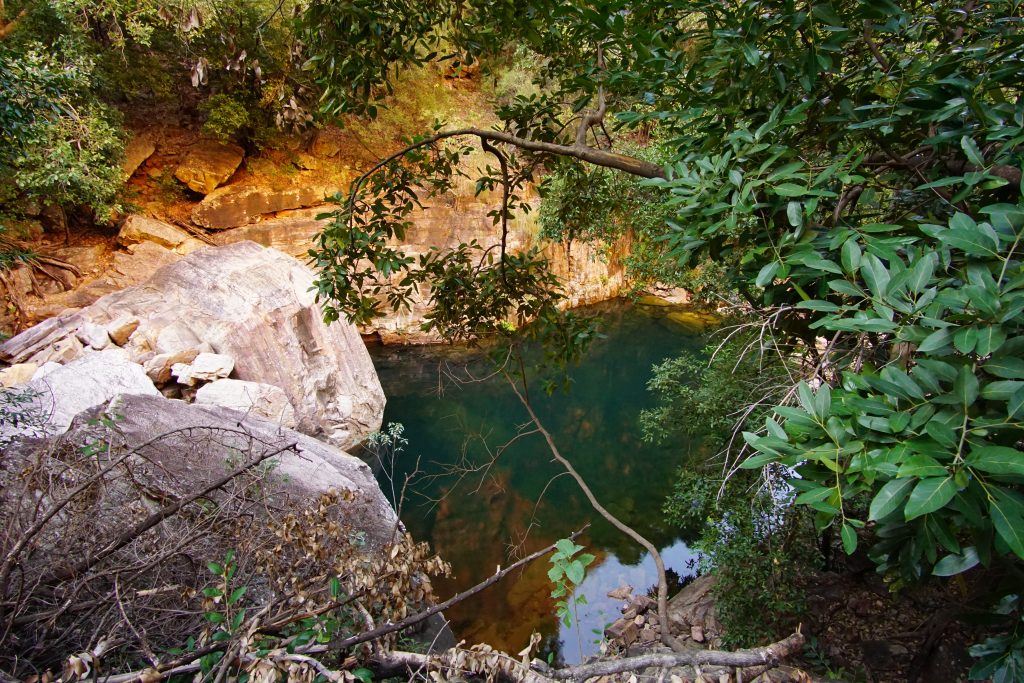 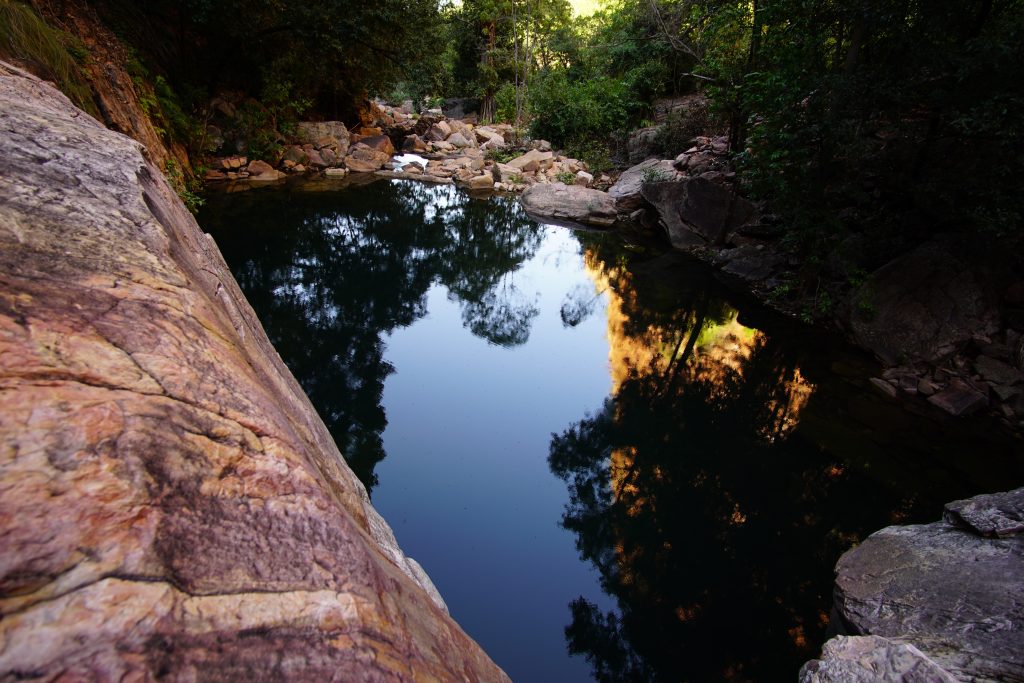 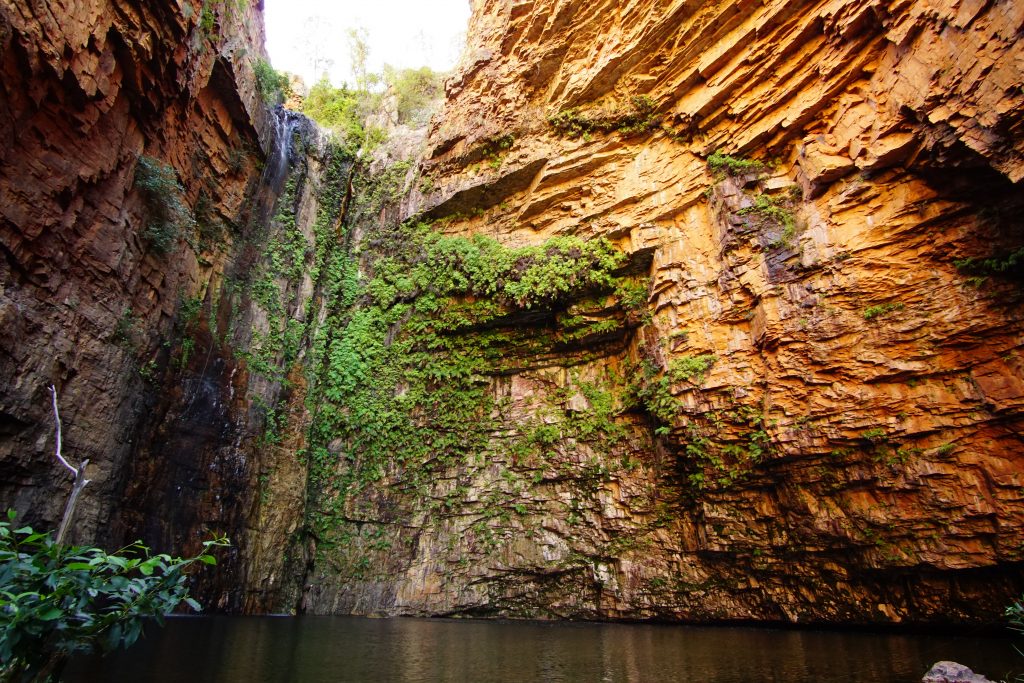 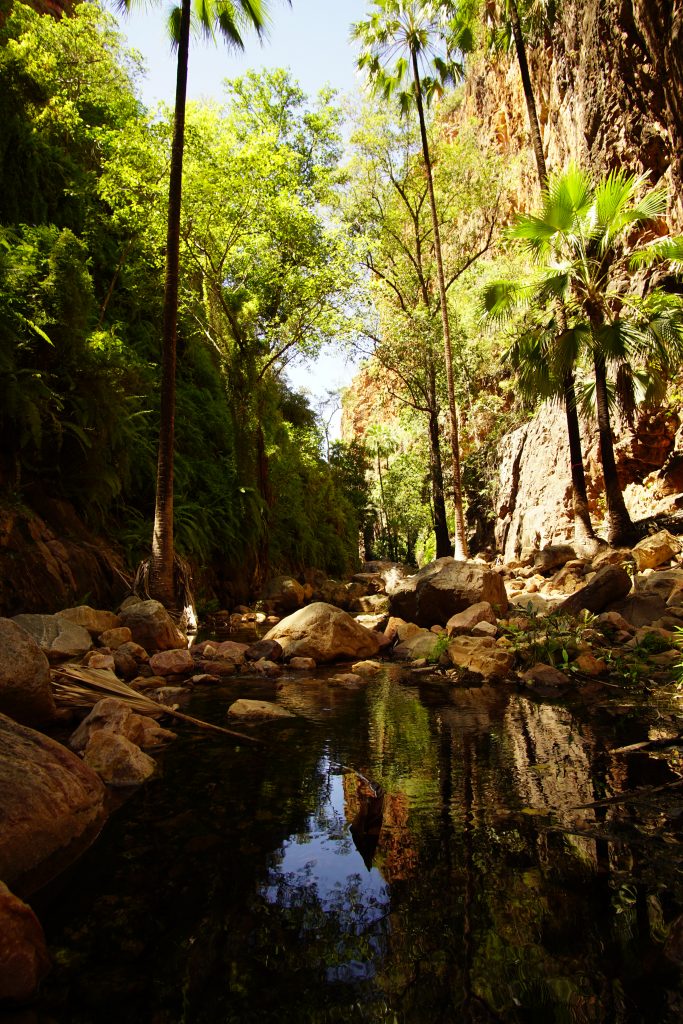 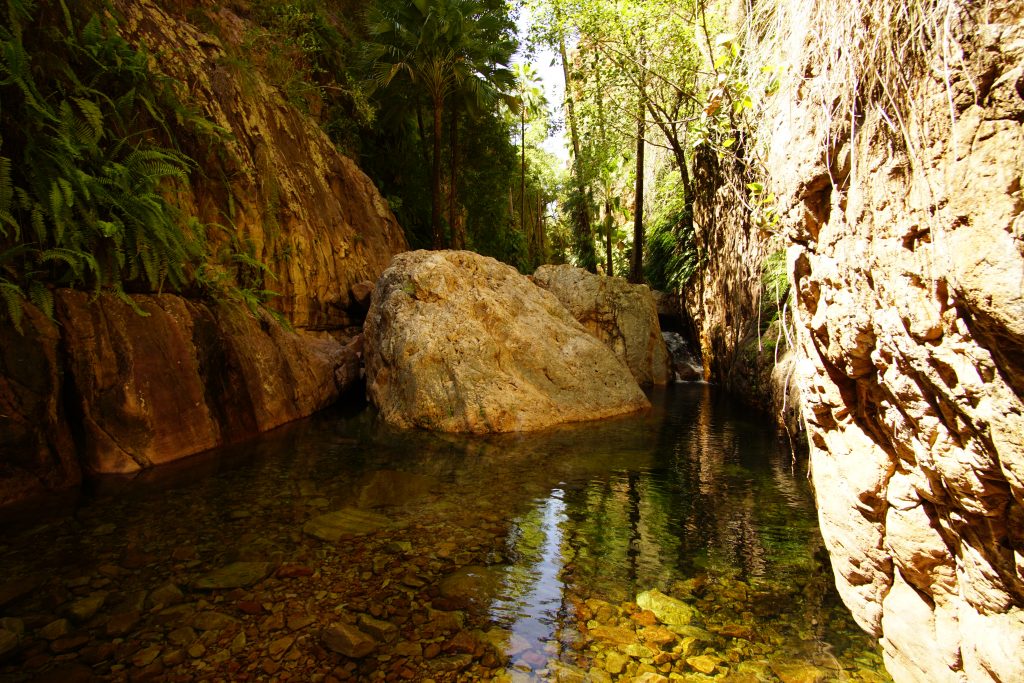 Climbing out of this rock pool, I slipped, falling maybe half a metre with my big toe taking the full brunt of stopping me falling any further. This is the ‘halfway pool’ on the El Questro gorge hike. I had already tried wading through here with all my gear, and even though it doesn’t look it, it is too deep to do with stuff strapped around your neck. Both the camera bag and my other bag were getting wet. Not particularly wanting to sacrifice my camera gear or satellite telephone I stashed them and went back with just my phone and the PLB. I wasn’t sure which side you were meant to climb out. The waterfall looked easier until I swam closer and realised I couldn’t touch the bottom at all that side, so pulling myself out could prove troublesome. The steeper side I could at least get my feet on the side of the rock (makes you realise how photos change the perspective, the above pool doesn’t look anywhere near deep enough for a 6 foot man not to be able to stand in it hey?). All was going well, till my foothold, held no longer and down I went.
As ever, could have been worse, banged head, water, etc… Anyway, pulled myself together. Foot was definitely painful, but just channeled a small bit of Toby Price, and hobbled out.
Toe at time, and 24 hours later. 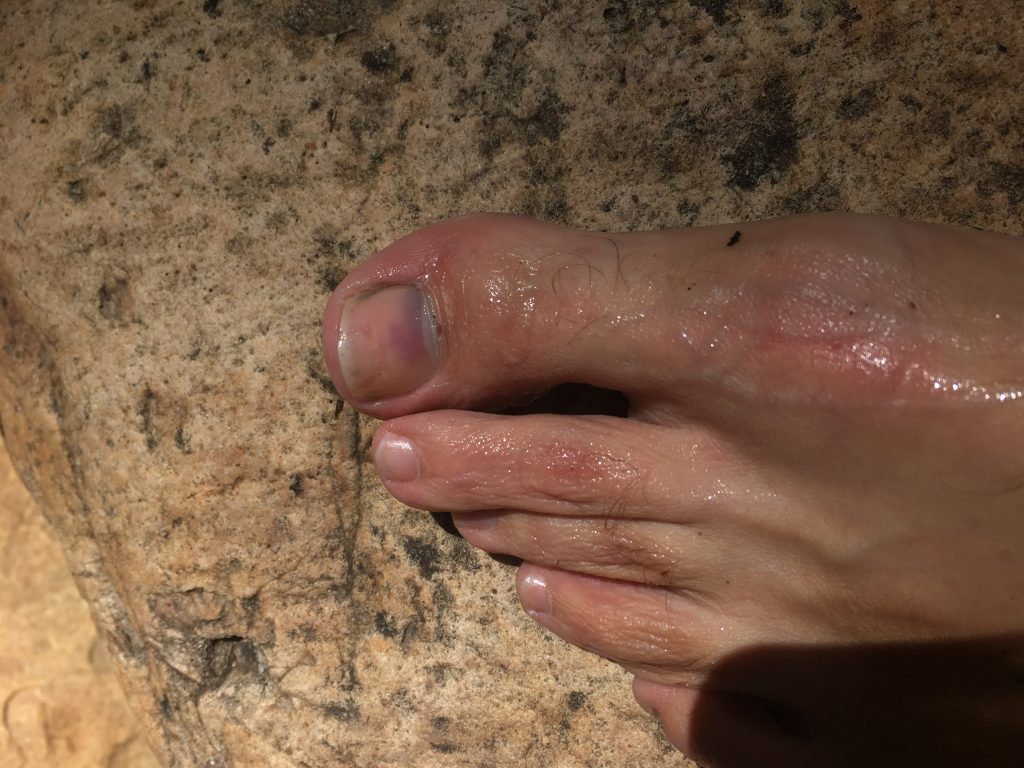 Looking a bit bent in the above photo, also shows how long I was in the water as my skin has started to go wrinkly.
Below, the full technicolour glory. Plus Roxy. 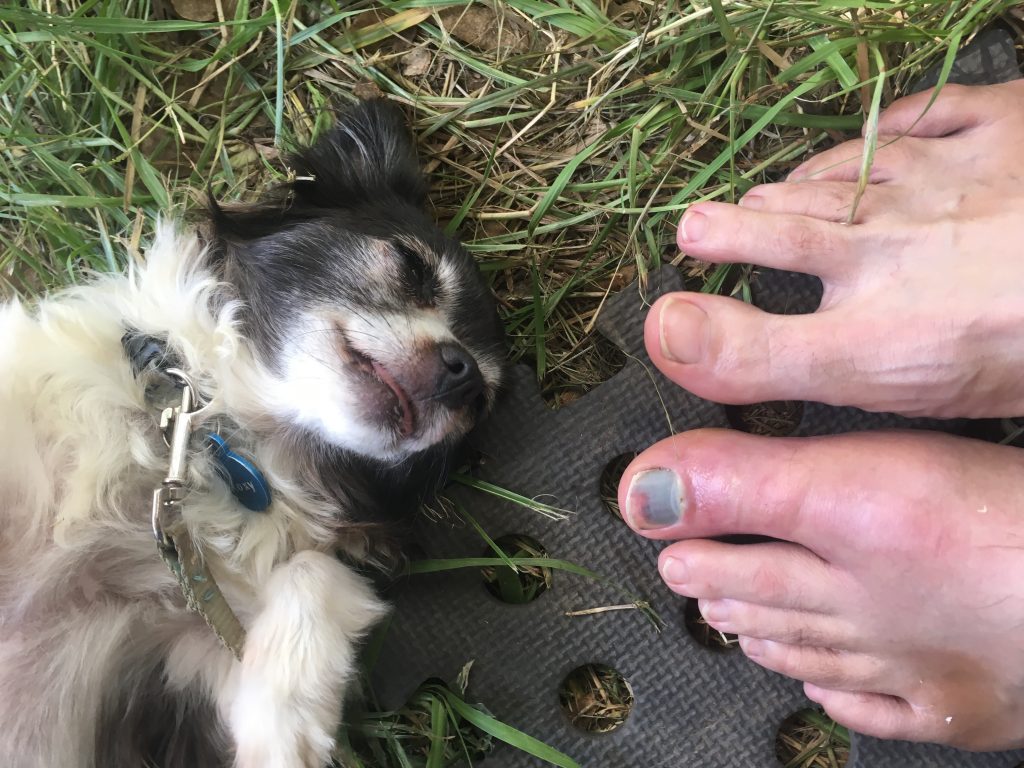 So, that’ll put a lid on this for a while. It has been sometime since I injured myself, but it just comes with the territory, if you’re an outdoors sort of person it’s just going to happen every now and then. Hoping it was just badly bruised and not broken, I just tried to stay off it, put some ice on it and N did most of the stuff I normally do. Whilst I watched movies and took over the laser pointer.
We got chatting to some Kununurra locals up for the weekend, they advised that the Kalumburu road was unlikely to open before Thursday (this was Saturday), and she being ex pat English like us, gave us a snapshot of what it was like to live in the north – HATES the wet season, loves the dry season. Something I’ve heard many times before.
Well between the bushfires, busting my foot and this bloody road closure I had the growing feeling that Kalumburu wasn’t meant to be. Why did I want to go? About 10 years ago I had spent three months of my life there. Cooking up a storm as part of the Australian Army AACAP project. I got some amazing experiences out of that time and was keen to revisit. I’d also been recommending The Kimberley as THE Australian destination after that trip. I might revise that now, it seems the crazy numbers that come in peak dry season now, have definitely changed the experience up here.
Kimberley-Australia newsletter sealed the deal at least in my mind. Time to move on and explore other areas. First though, I had seen the backtrack to Wyndham recommended as worth doing, not far from here. Just before the crossing of the Pentecost River which we did anyway. 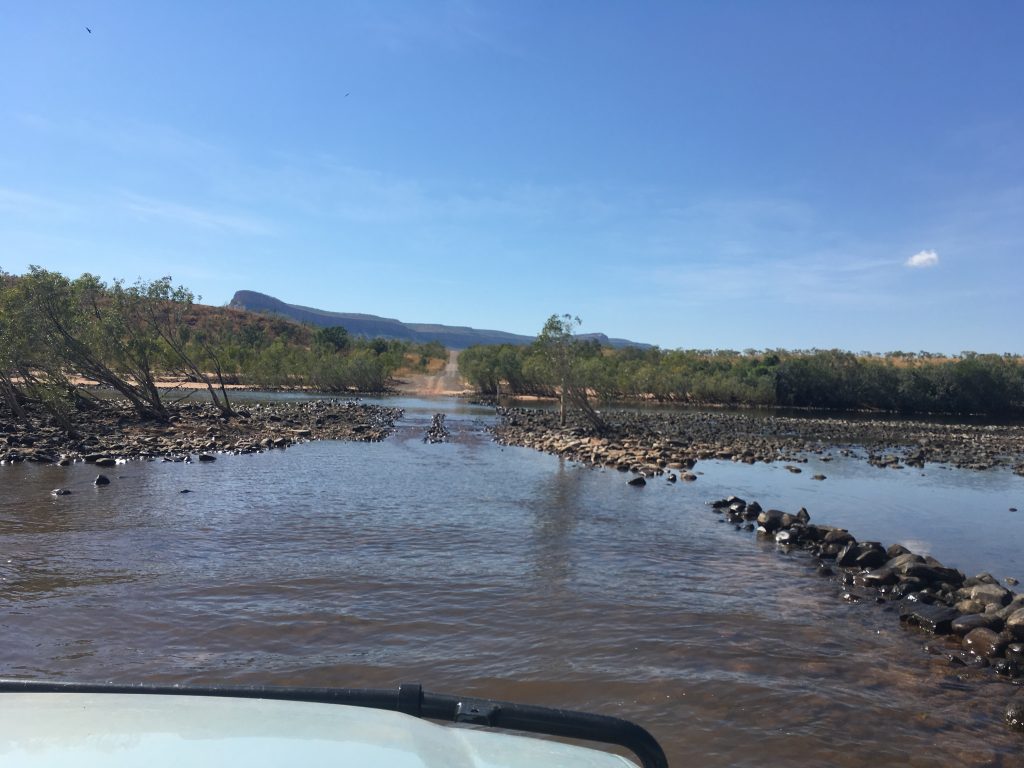 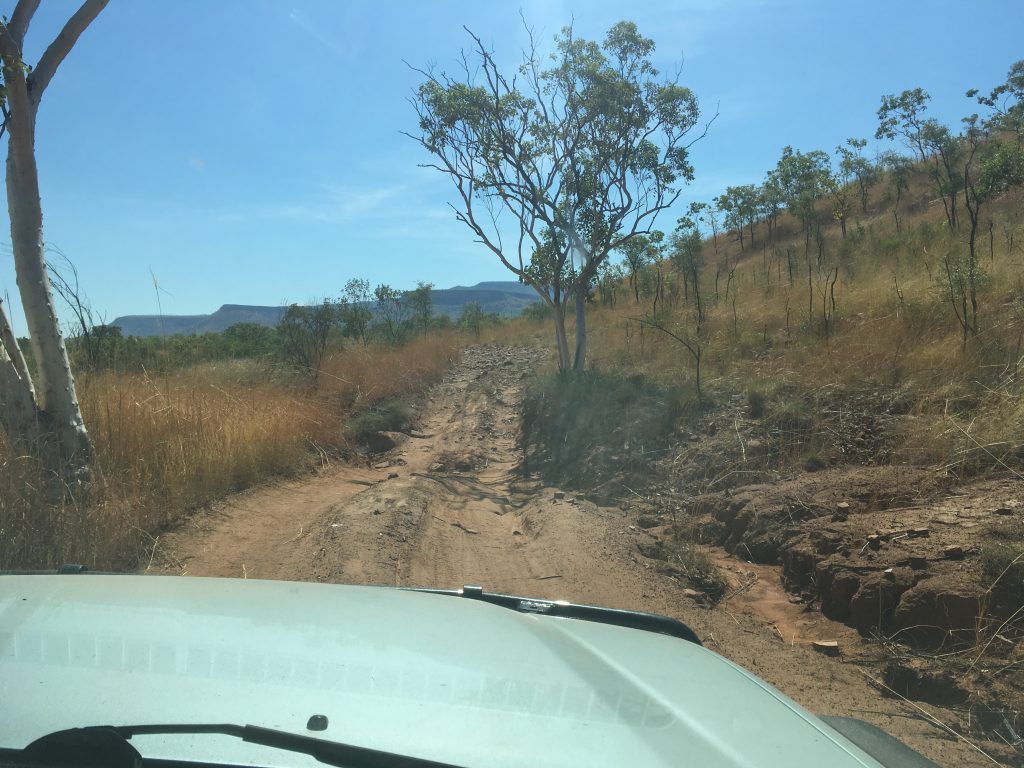 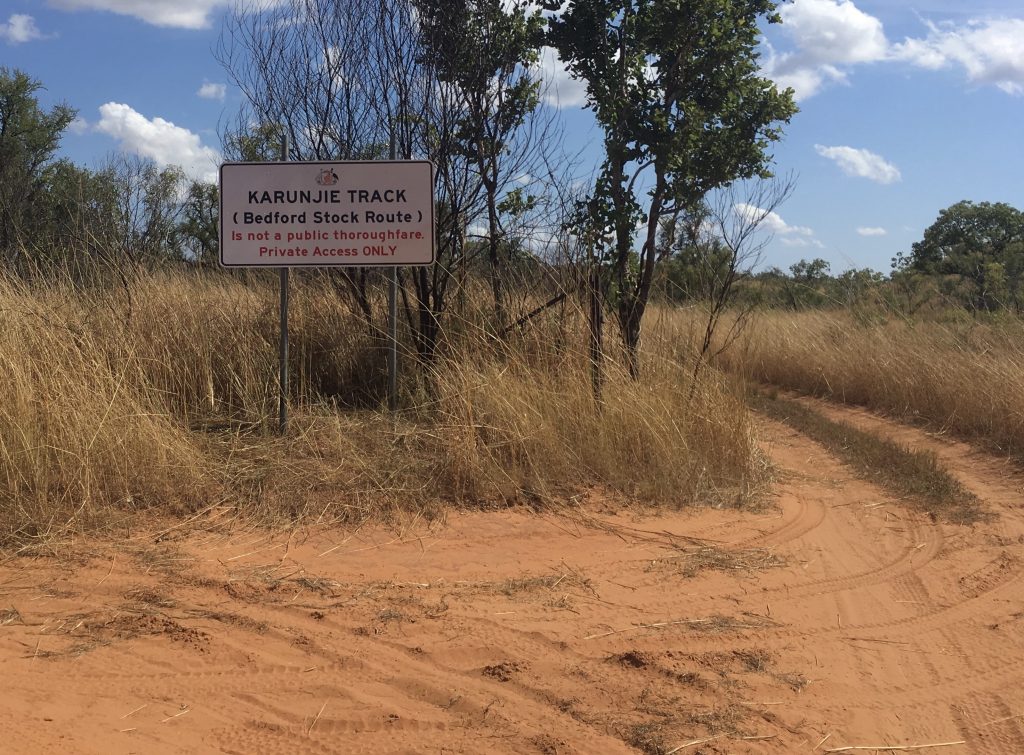 That just about sums up how it went in the Kimberley for us. It would be churlish to say we didn’t have a good time, we got to some cool places for sure. But my expectations were high, and sometimes it’s just not meant to be. Maybe a few weeks later would have made all the difference. Hey ho, first world problems!
[In reality, with N being crook back in January we were about a month ahead of when we were originally planning to be here. However with how hot January was, we might well have ended up heading home then anyway. Might, but, if, you can only plan so far into the future]
Back to Kununurra, and onto one of my favourite places in the world. Once again we would be back in the Northern Territory!
WA – some observations. Wow! What a State. Covering about a third of the country, its scale and diversity are unsurpassed. You could spend a lifetime exploring here (we had been here about eight weeks).
However, the coast is now a very busy tourist route (I could keep harking back to how it was twenty years ago, but I hate it when people do nothing but spout off about the good old days, that clearly aren’t coming back). So be warned. Heading into the outback interior definitely gives more of a sense of vastness and toughness of the environment. Although with so much mining it is maybe more inhabited than you might expect, which gives it its own character.
It’s expensive. This in itself, I don’t have a problem with. Distances are huge, transportation costs have to be factored in, businesses are there to make money. Be glad they are there.
However, there is virtually no free camping. Ok there are many, many roadside ‘rest stop’ camping areas, and we used these on multiple occasions. When you just need somewhere to stop because you are never going to get to the next town before dark, fine, great. But I mean there are virtually no good free bush camps, where you might want to stay a bit longer. Even out in the middle of nowhere (which is a real shame, because there is a whole heap of that, and you really need to camp in it to experience it best). It’s not only that they are not free, but they are just not there. It’s pretty much either stay in the towns, national parks or stay be the roadside. Possibly with more research or more local knowledge, it is different. However we traveled the same here as we did through NSW, VIC and SA. Noticeable difference. Maybe it is just because many humans are pigs and can’t clean up after themselves – no offence to pigs.

One thought on “AWOL Around Australia… The Kimberley. Part 2”