AWOL Around Australia… Looking On The Bright Side

Whilst driving around Lorella Springs, we mulled over the concept of one man owning so much land. Of course this isn’t the biggest private property in Australia, not by any means, and Rhett is a legend for opening it up and creating what he has. Just the way the world is divvied up, not just here but all over. Just doesn’t seem quite right somehow… Anyway, it’s been that way a long time and no one ain’t giving their bit up! Still, food for thought. 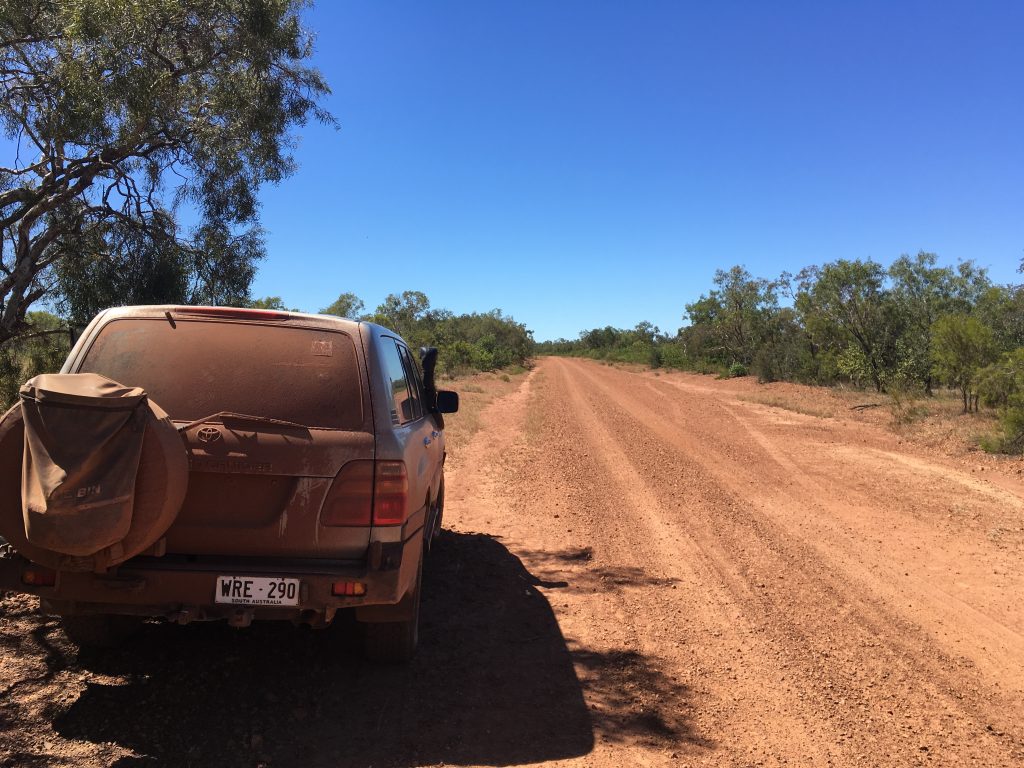 Whilst Lorella Springs was great. Like a National Park it is also slightly ‘prescribed’ as kind of know what you’re going to get, even if it is awesome. So while we could have stayed longer – we did about 300km of trails, and about half the station – it was time to get back to just following our noses, and the mixed bag that comes with that.

I have a particular thing about finding stuff myself, so I guess it wouldn’t bother most people. So just go, it’s a great place for all experience levels.

Whilst I’m in a reflective mood… I’ve had plenty of time and different experiences on this trip to really think about what sort of exploring I want to do, and how I like to go about various aspects of this hobby. This is good. I kind of know what I want to do with it, for the next, what? 10 years or so.

The road south (which is the road most people would use to get to Lorella) is pretty rough. Not that the road we came in on, to the north, was much better. We pass about eight ‘rigs’ coming the other way. Dry season tourists are starting to stream north.

I turn off, to head east, a detour to the town of Borroloola, for old times sake. I was here in 2006, as my first AACAP project with the Army. It was also my first visit to an Aboriginal Community. I can tell you it was an eye opener back then. Rubbish, especially beer cans everywhere. Houses without doors or windows. Fires lit inside the houses. It felt like I was in a documentary, about some third world country.

I remember as part of the advance party we stayed in town initially, and the big congregation of locals outside the pub one morning – some sort of community meeting? Nope, that day was ‘pay day’ and it seemed like the whole town was ugly drunk for the next few days.

Well I’m very glad to say the Borroloola is a much improved place. The pub is no longer, the building is now a shop. The piles of beer cans around the town have gone, and it seems a much more together community. 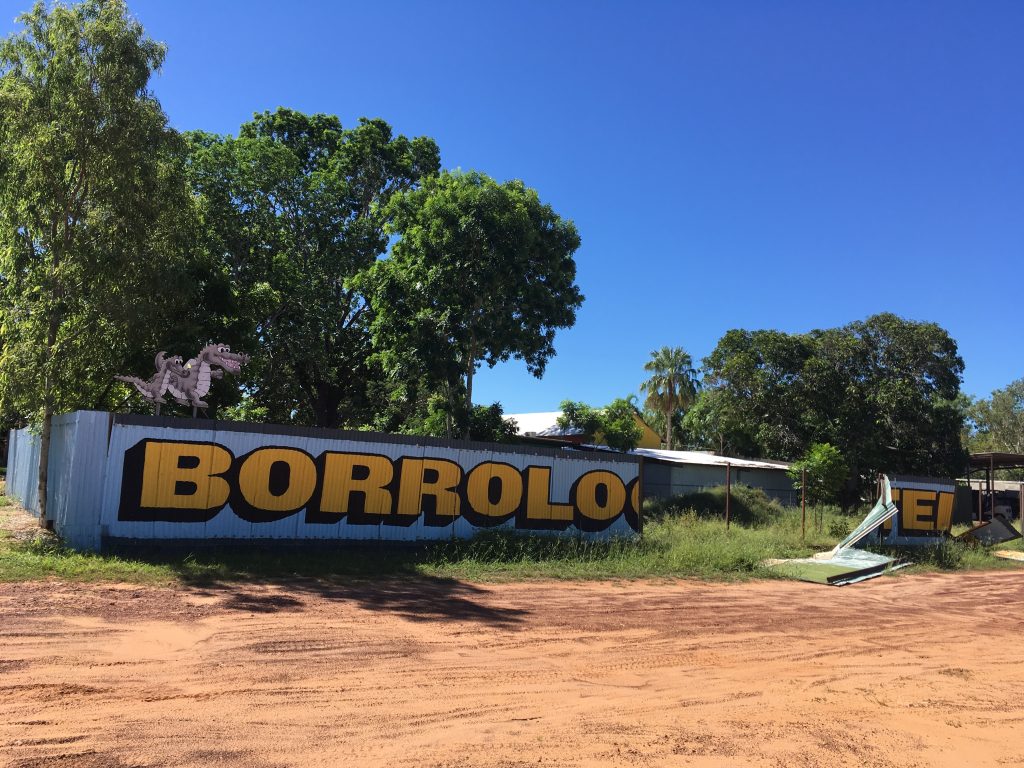 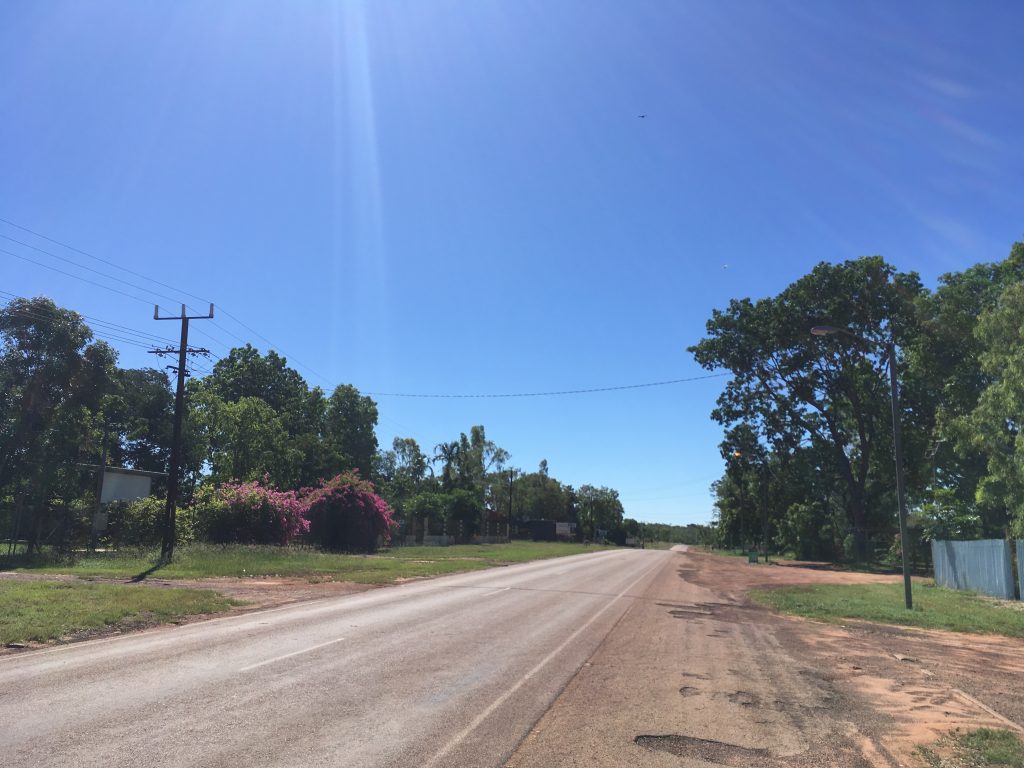 This bridge wasn’t built last time I was here. Also, this crossing was under about a foot of water, that’s the difference between a big wet season and an average one. 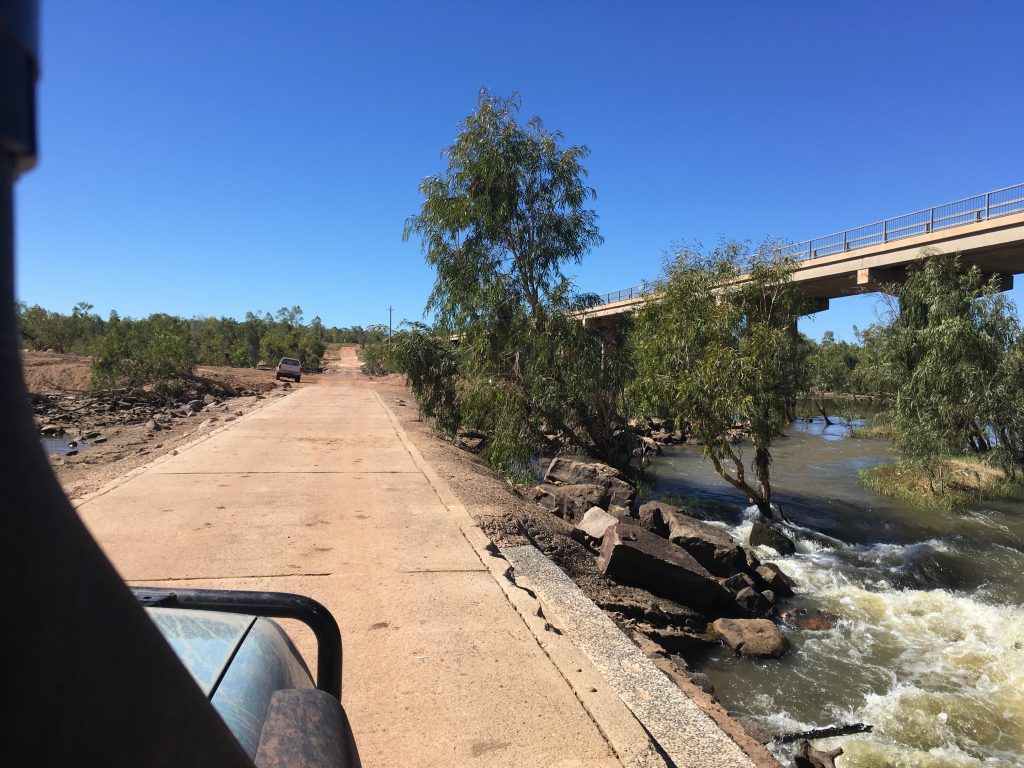 I fill up at the servo and have a chat with the bloke in there “Is this a dry town now?” 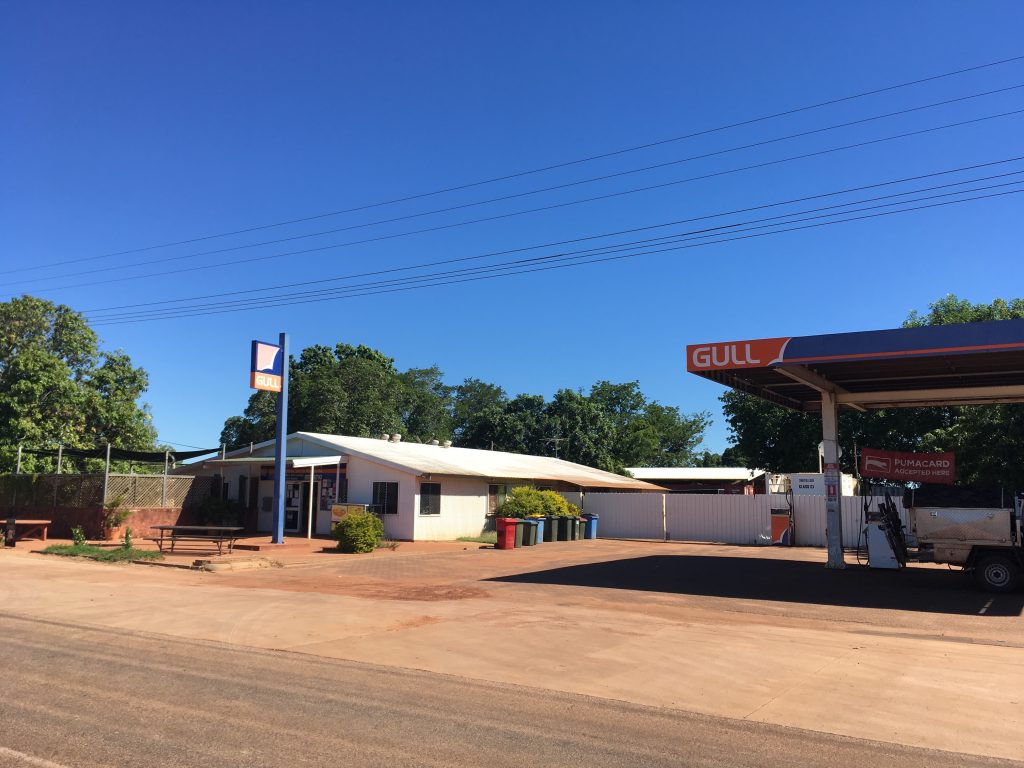 “Nope, but it may as well be” I tell him of my memories and he says its something he’s heard before. He says it works well here, better than many ‘dry’ communities. He also explains that he came here after a four year stint in the Anangu Pitjantjatjara Yankunytjatjara (APY) lands, one of the most remote communities in Australia. Good chat. I buy some of his delicious fried chicken, and a book about Borroloola.

I used to ride my bike out to this sign several times a day (n0t to mention I explored every trail I could find in the area). I have pretty much the same photo somewhere from 2006. 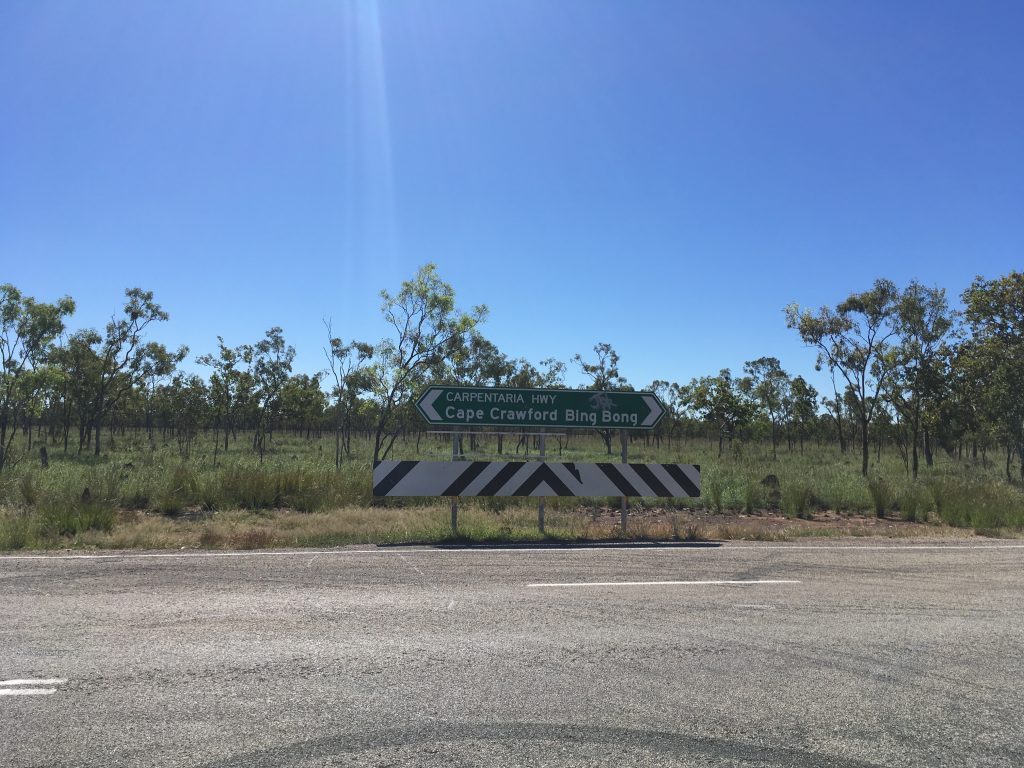 So, nostalgia trip done, we hit the highway, back the way we had come heading for Heartbreak Hotel. About 40km out there is an almost inperceptible noise, like a slight change in road surface. Then a distinct smell “you smell that?” I say, “yes, and I heard a noise”. I start to pull over, checking my mirrors as a matter of course, and there is nothing, but a distinct smoke plume behind us…

Quick outside inspection is nothing, looking underneath our issue is apparent. 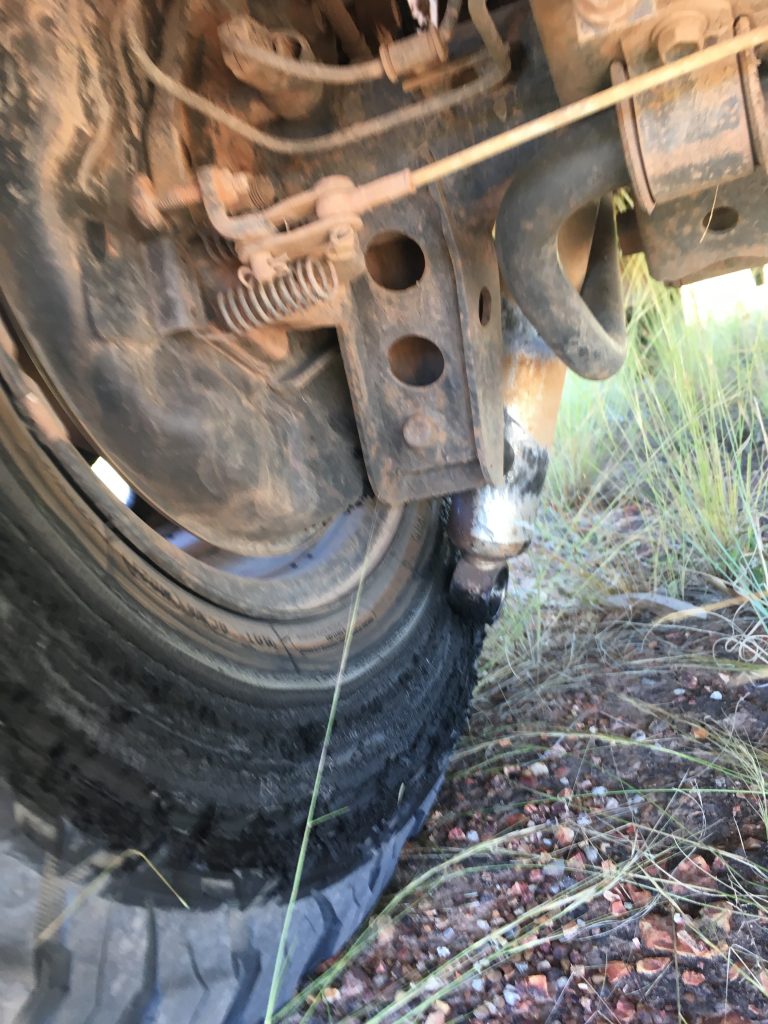 Rightyho. Pull the truck a bit further off the road, this is a mining road train route. Put on sunscreen, a hat, get out both front floor mats. No point being unnecessarily uncomfortable.
It’s a straightforward enough repair. Remove tyre, the damper has mangled its bush as its worked its way off the mounting, with the retaining bolt long gone, before munching out the sidewall of the KO2. So there’s no point putting that shock back on, we have spares strapped to the chassis, may as well use them. 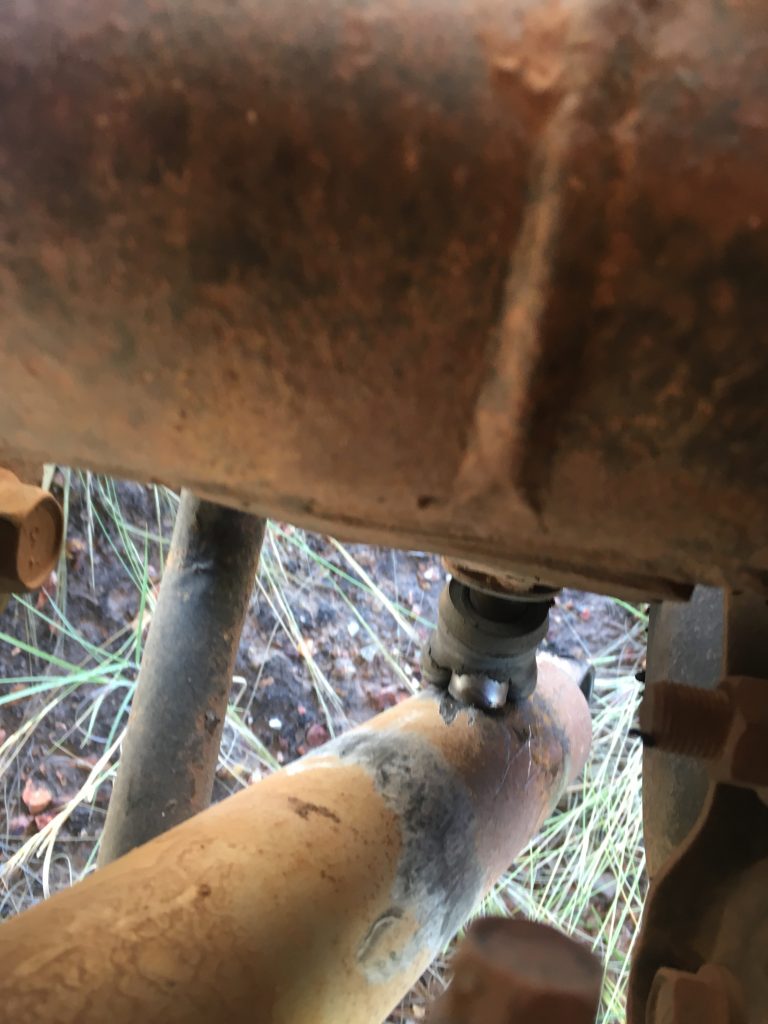 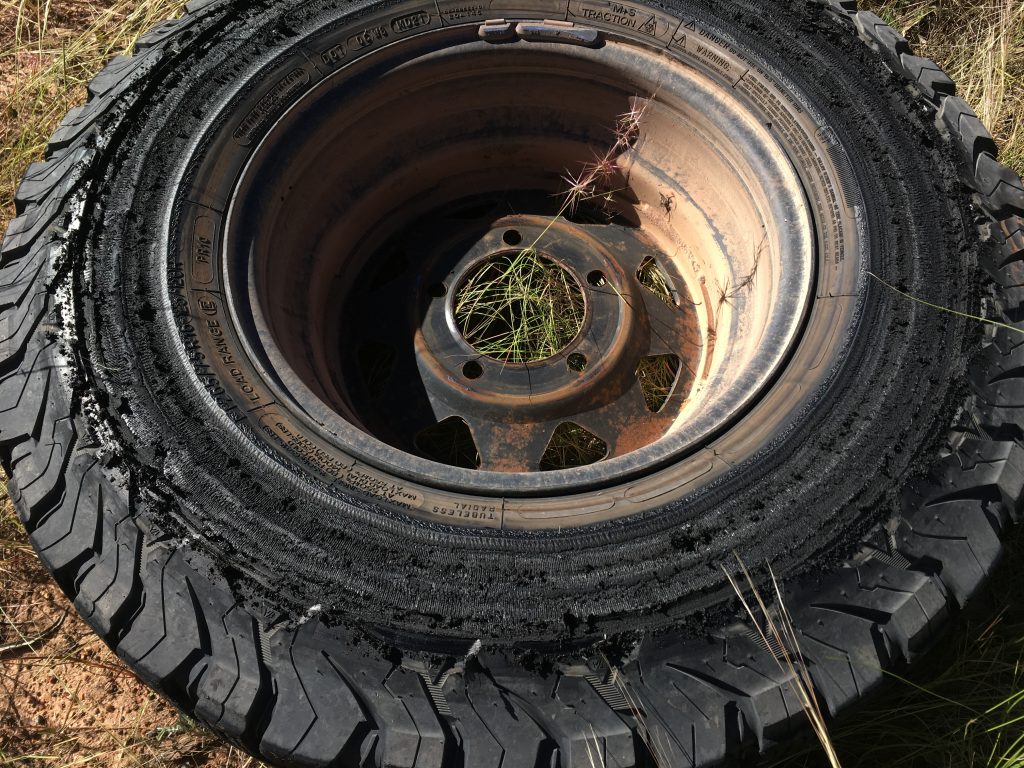 The two top bolts are not in great shape, owing to the design that sticks the very end on them through the chassis and out into the world of water, mud, crap, and dirt. So the threads on them are not happy being wound out. I persevere with lots of winding in and out and lubricant, gladly nothing breaks and the shock is out. Swap the top mounting over with the TJM shock I bought back in Alice Springs with its bonded in lower mounting. I wrestle the replacement back in, and try swapping the two top mounting bolts around, but they’re still not happy, I get them tight enough (but would keep checking and tightening them for the next few days). I have an ex chassis bolt (thanks, new recovery points) that is the right size and pitch for the lower mounting bolt, but way too long. Many spacers and washers later I manage to get suitable tension on it. 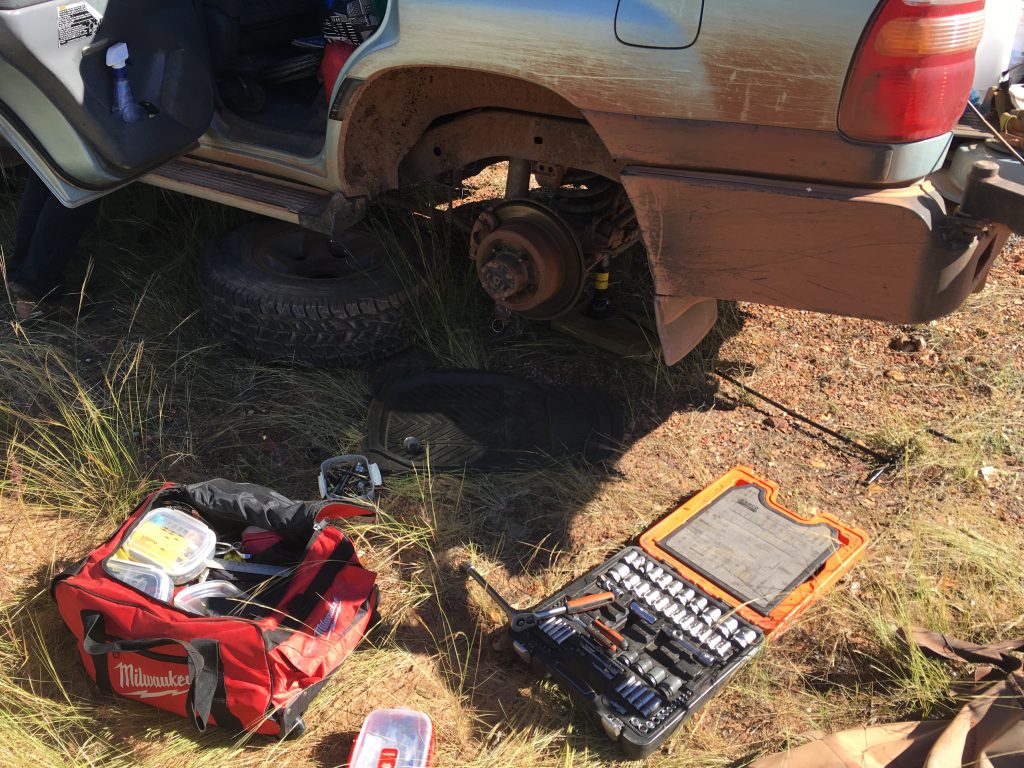 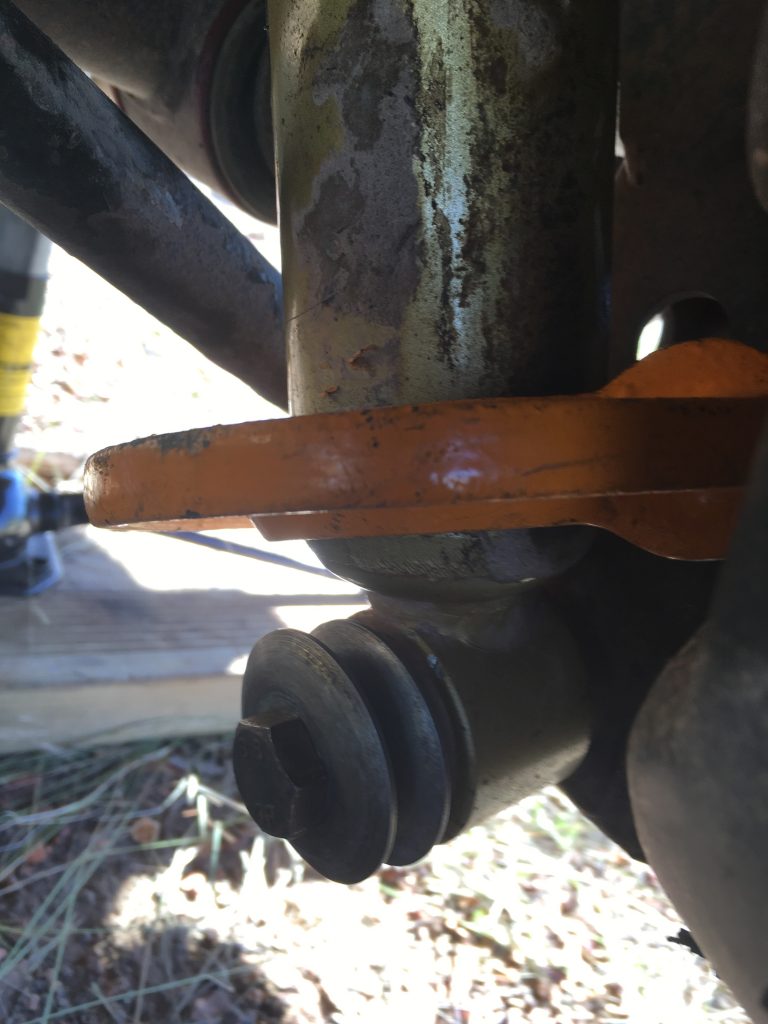 Spare tyre on, everything away and we are going again.

A quick look at the map and there is nothing on our intended route that looks like it might have a replacement tyre. So we u-bolt back to Borroloola, it’s a NT public holiday today, but hopefully we can get a new tyre tomorrow.

On reflection, bloody glad I got that fried chicken! If you see good fried chicken don’t pass it up, you never know when you’ll need those greasy calories…

Rolling into Borroloola we see another couple with the Patrol that we’ve run into the last few days, around Lorella. We have a laugh and swap stories. Come the morning I tell them I hope not to see them again (joke). 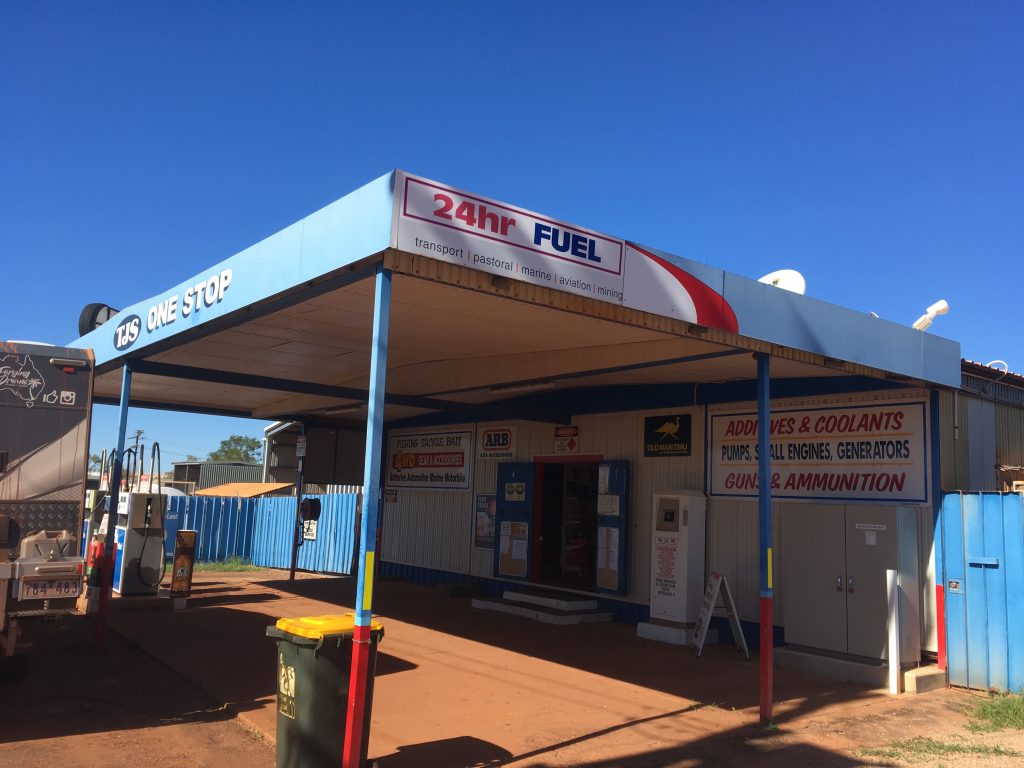 The local auto store is the sort of thing you dream about in this situation. Stocked better than most city stores, not with the fluff, but with stuff you might actually need. Mother and daughters run front of house, and were more knowledgeable than most auto store workers I’ve run into. While the guys did the workshop stuff out the back.
A choice of four or five different types of tyres in my size – probably the main reason I stick with the standard size – went with the Cooper, BFG not being an option. It sets me back $396. All of this is strangely reminiscent of last time a destroyed a tyre. 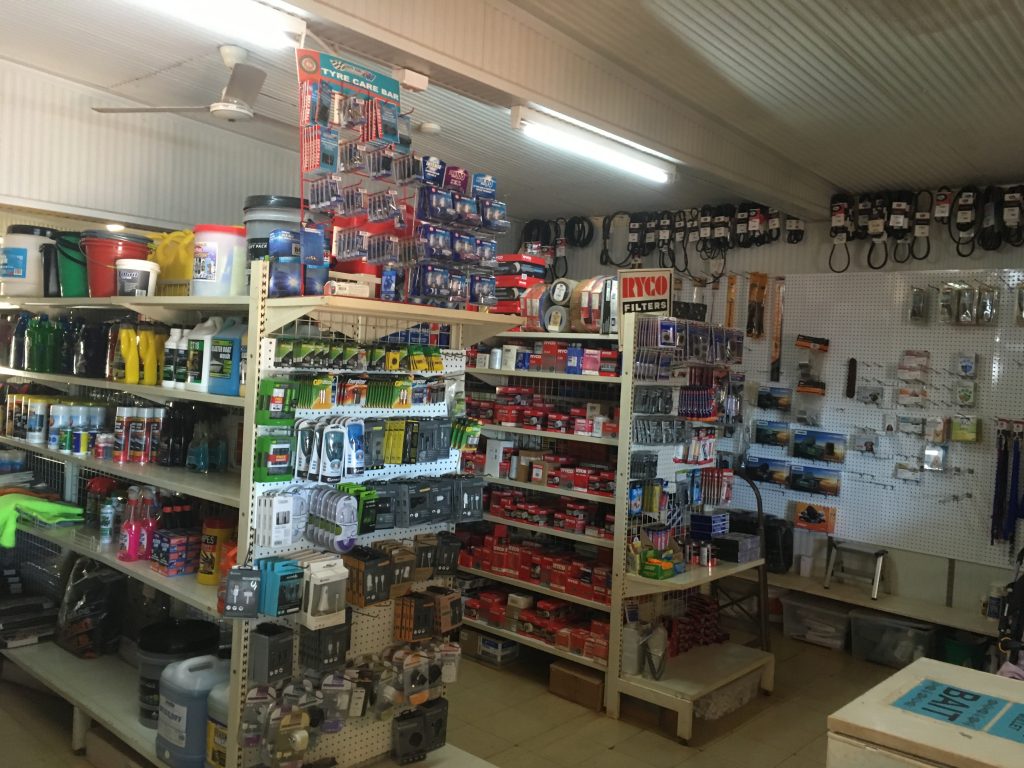 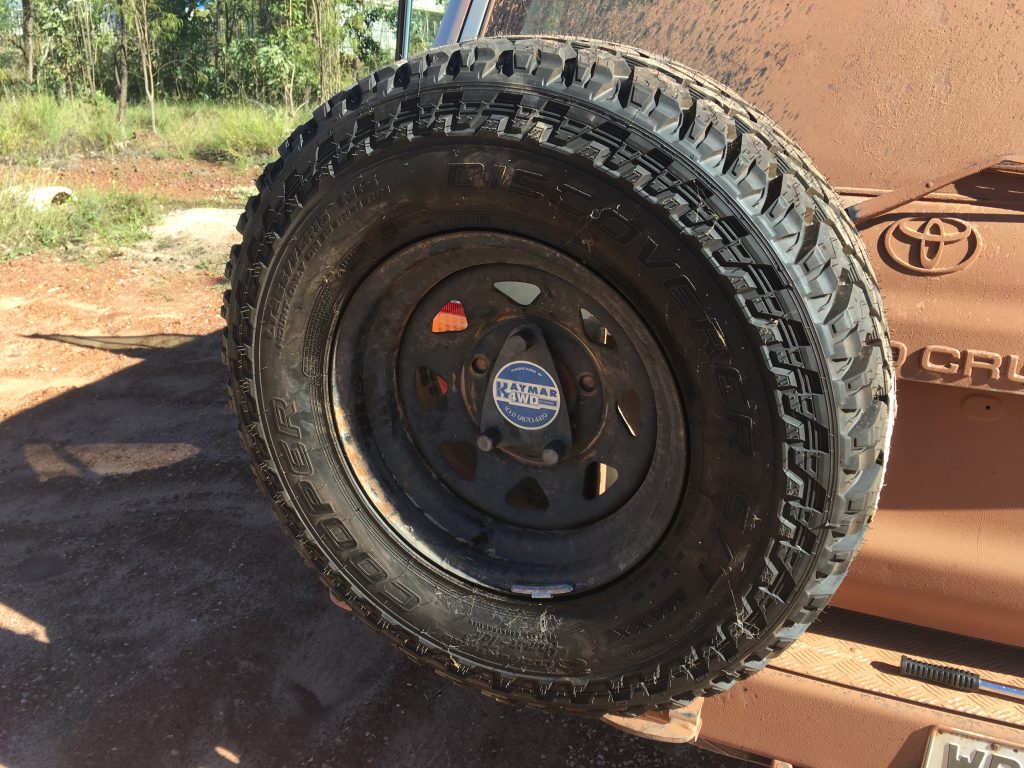 That was on the way back from Arkaroola in the Flinders Ranges, that time the town was Copley. Again about four tyres to choose from, I also choose the Cooper – which is now on the car, and again just under $400 for the tyre. Anyway, as well as the tyre I grabbed all new bolts for both rear shocks. We were good to go again.

So why is this called ‘Look On The Bright Side’? Well, if this had happened pretty much anywhere else we had been the last few weeks it could have been a (much) bigger headache. It also justifies somewhat the belt and braces approach I took to packing and preparing for this trip. This sort of situation, is why you lug around all that gear to get you out of trouble. 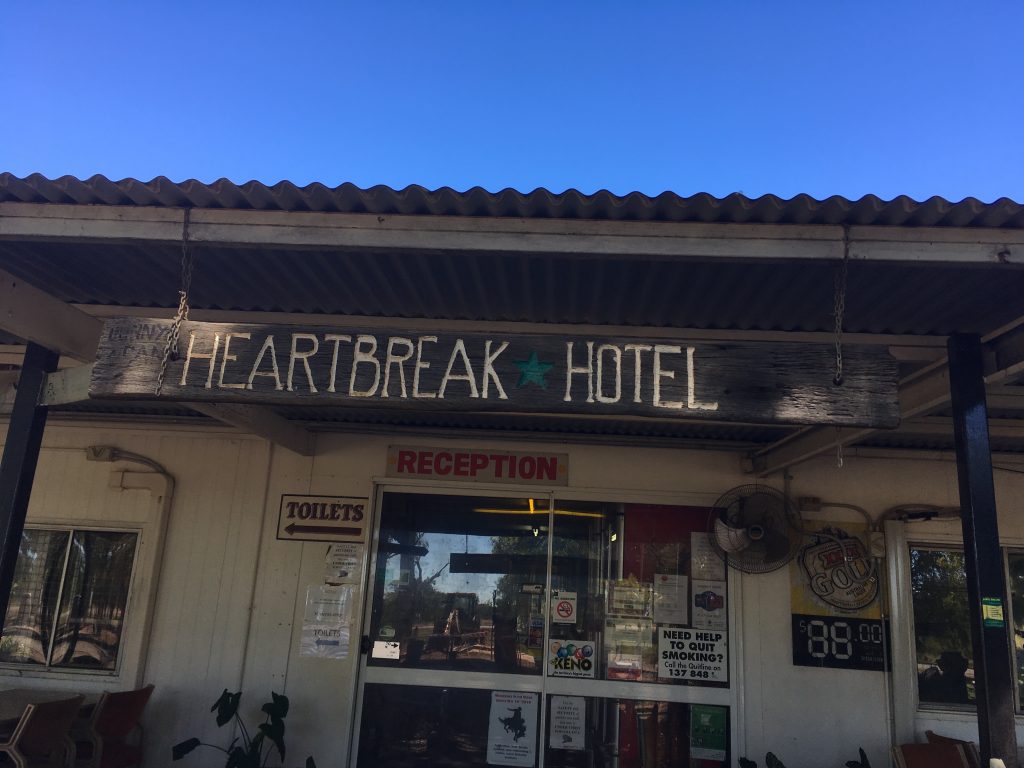 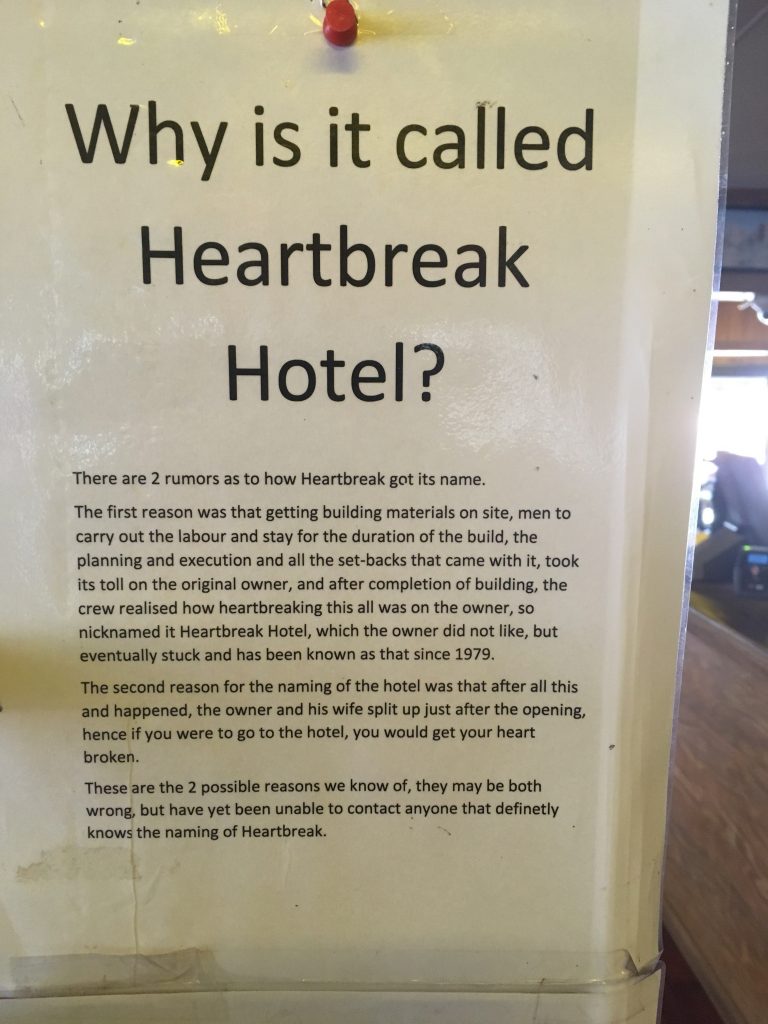 So we make it to Heartbreak Hotel and turn the truck due south. Down through the (Gnarls) Barkly Tablelands.

Well if we were looking for a contrasting environment to what we had been in, you couldn’t find a more different one. 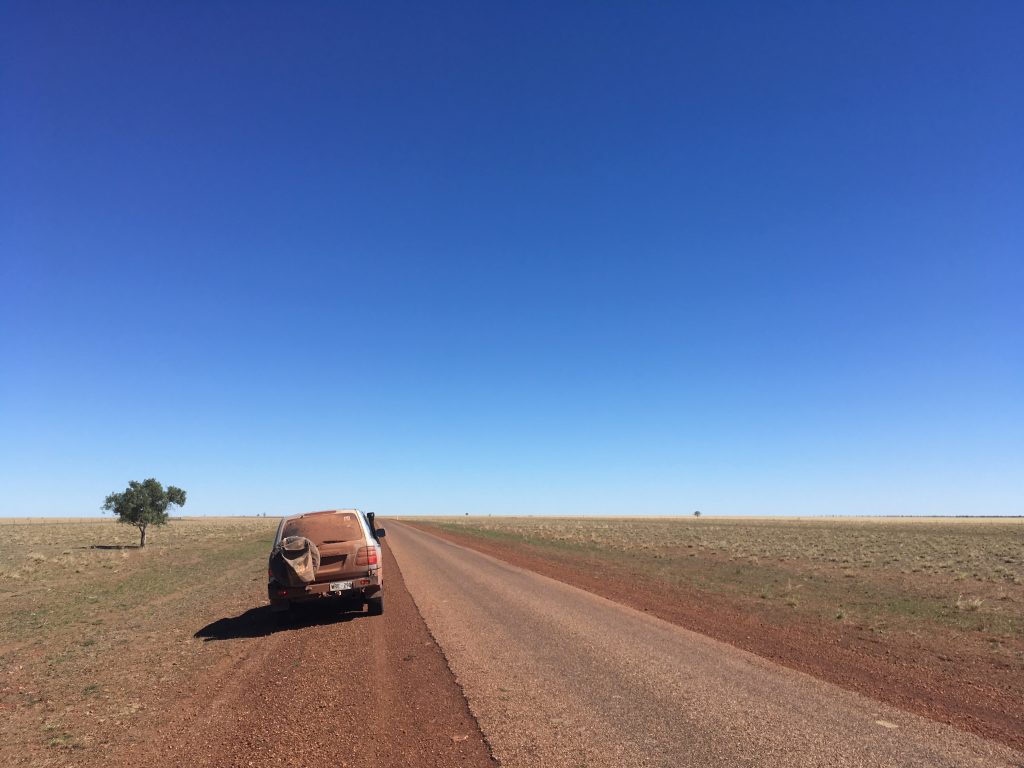 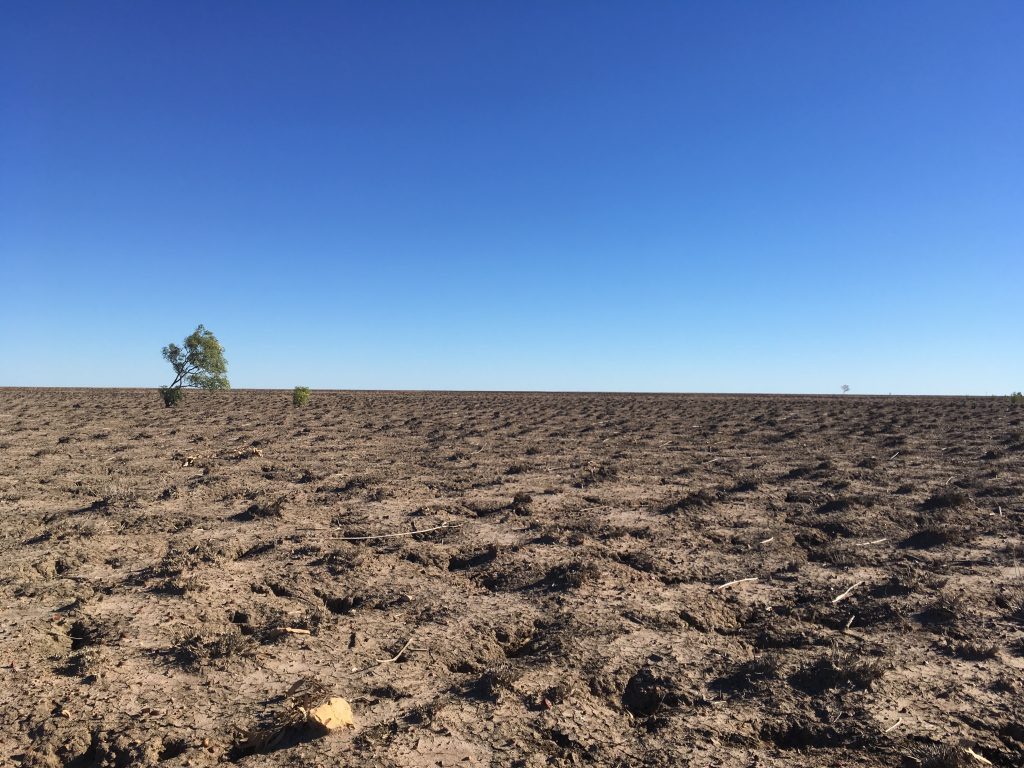 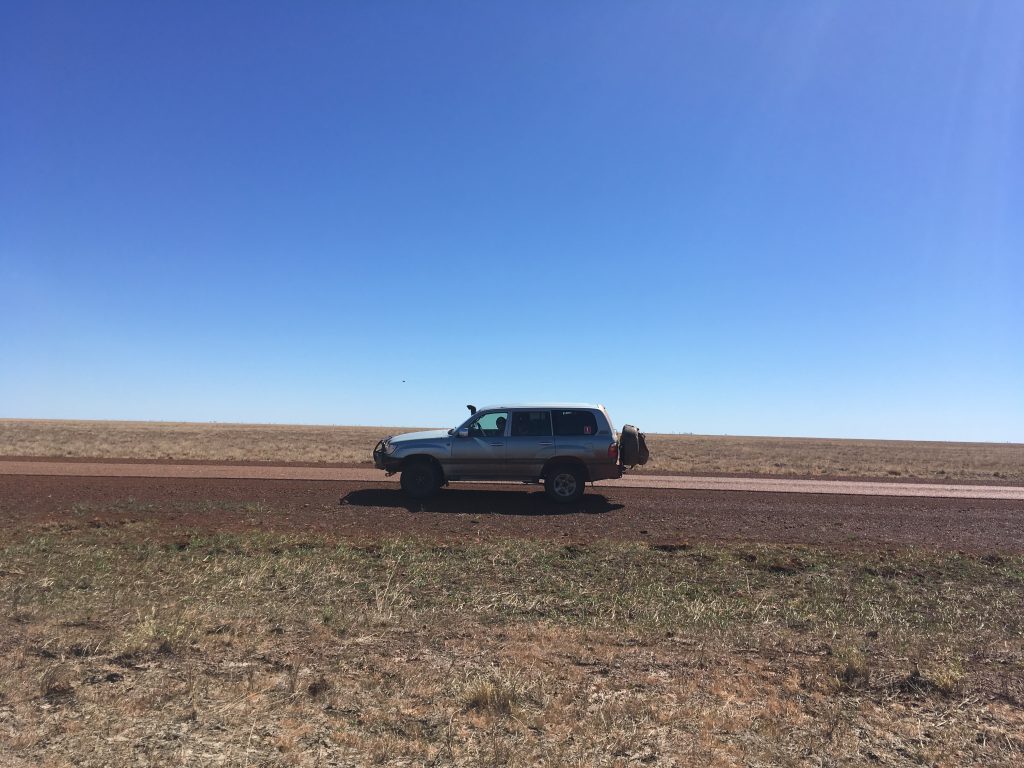 It appears grazed within an inch of its life, yet judging by the amount of cattle, and ‘beef bus’ road trains we saw. It seems to support a pretty significant amount of cattle. 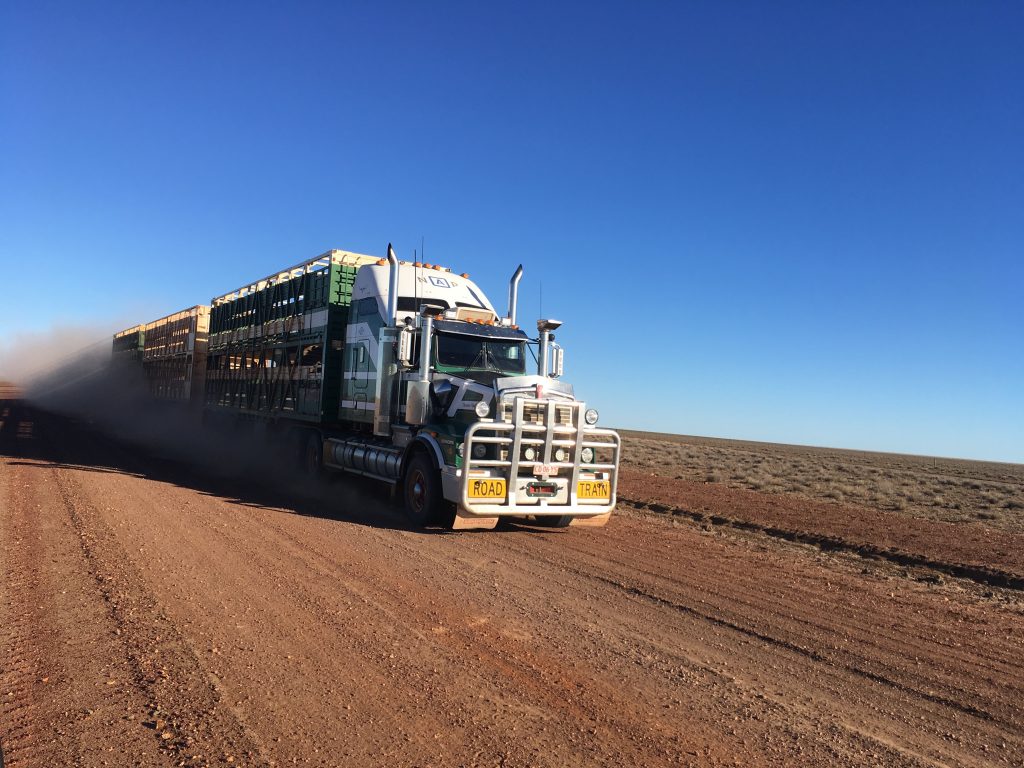 My original plan was to check out a couple of bush camps along this route, which we duly did and neither of them had any appeal apart from sucking down dust and flies for the rest of the arvo. So we decided to push on to the town of Camooweal, just over the border in Queensland. 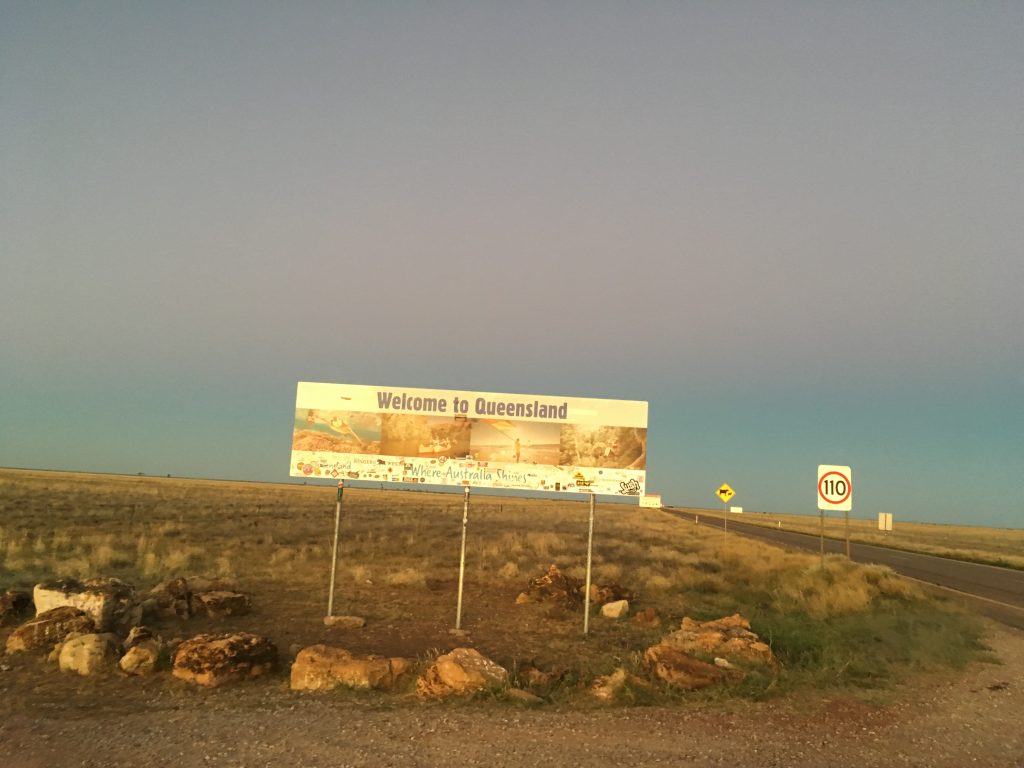 Sun setting behind us,  as we head due east. 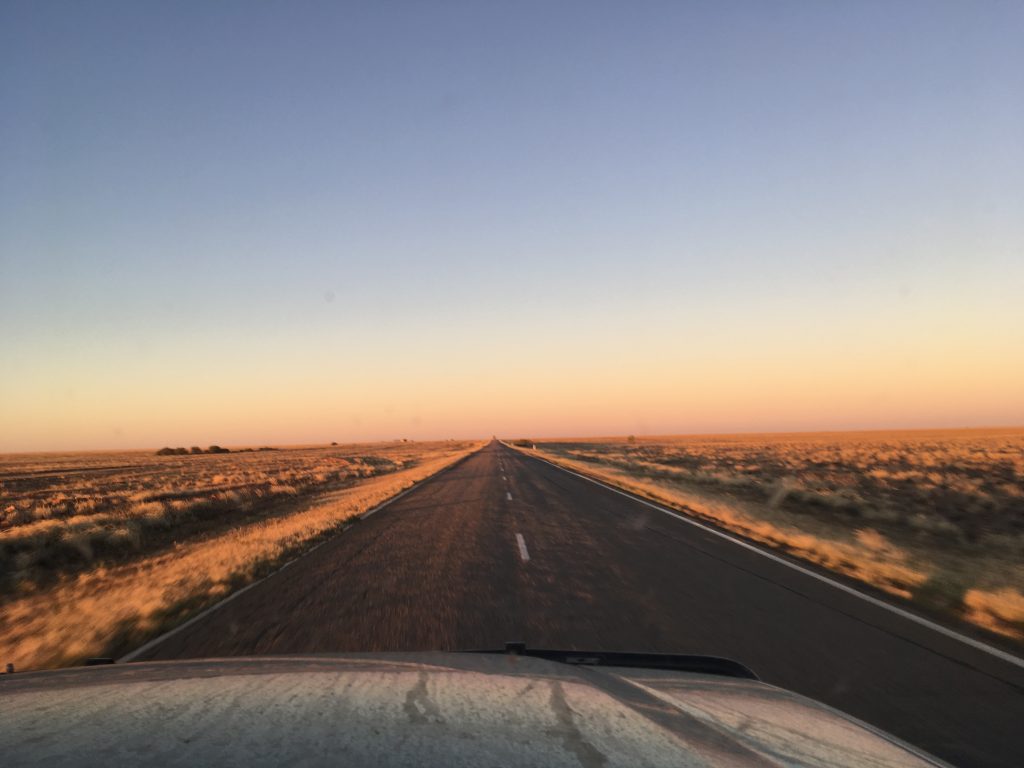 You never know what you are going to get with these little country towns, some are basically ghost towns, where others are pretty vibrant.
I told N I was dreaming of a pub, with a balcony, only so we could sit down to a good meal with the pooches outside. And you know what? That’s exactly what we found. Bloody good food too (it seems the town is a major stop off for roadtrains, judging by the amount parked up in the dedicated lot). 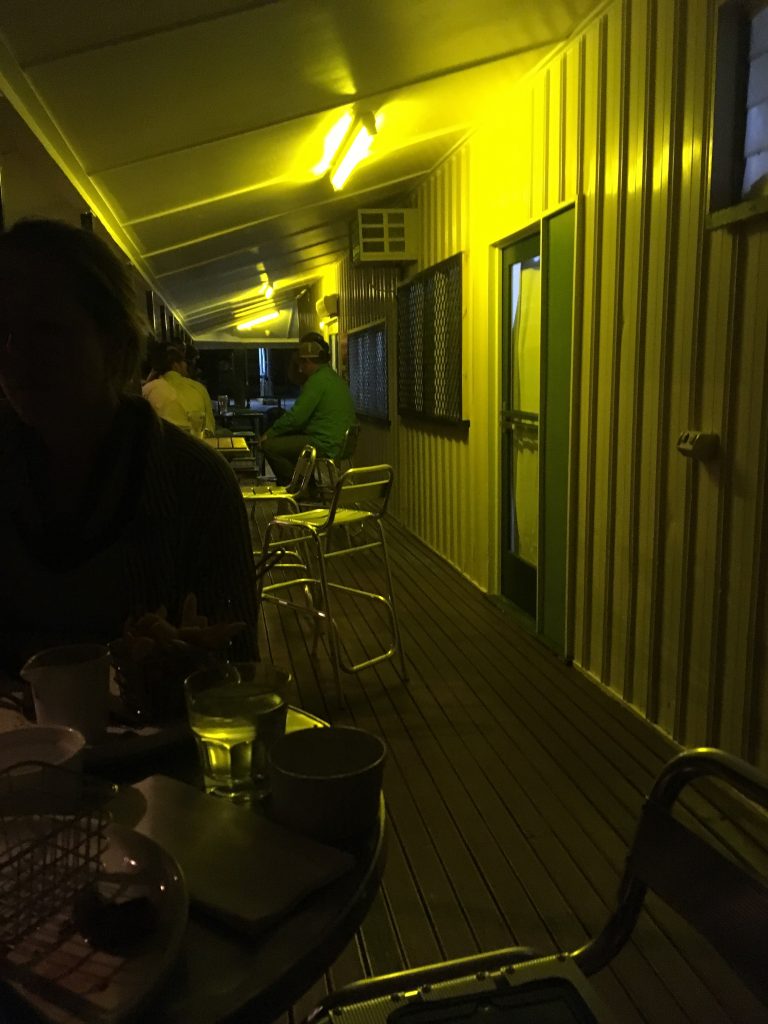 One thought on “AWOL Around Australia… Looking On The Bright Side”