AWOL Around Australia… Turning Around

Well, early signs were promising. An absolute beauty of a trail through the hills, between Irvine Bank and Mount Garnet. Nothing difficult, but just rolling dirt tracks. I put Bertha in low range at times, we were still heavy with fuel, etc, so it just takes the load off. 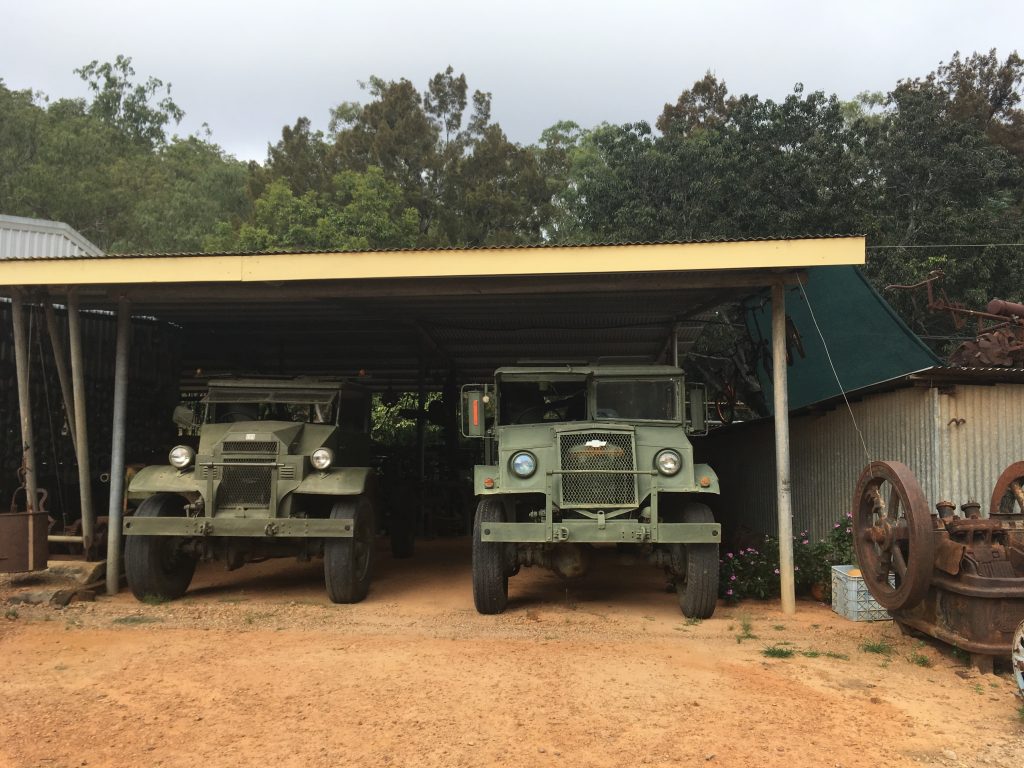 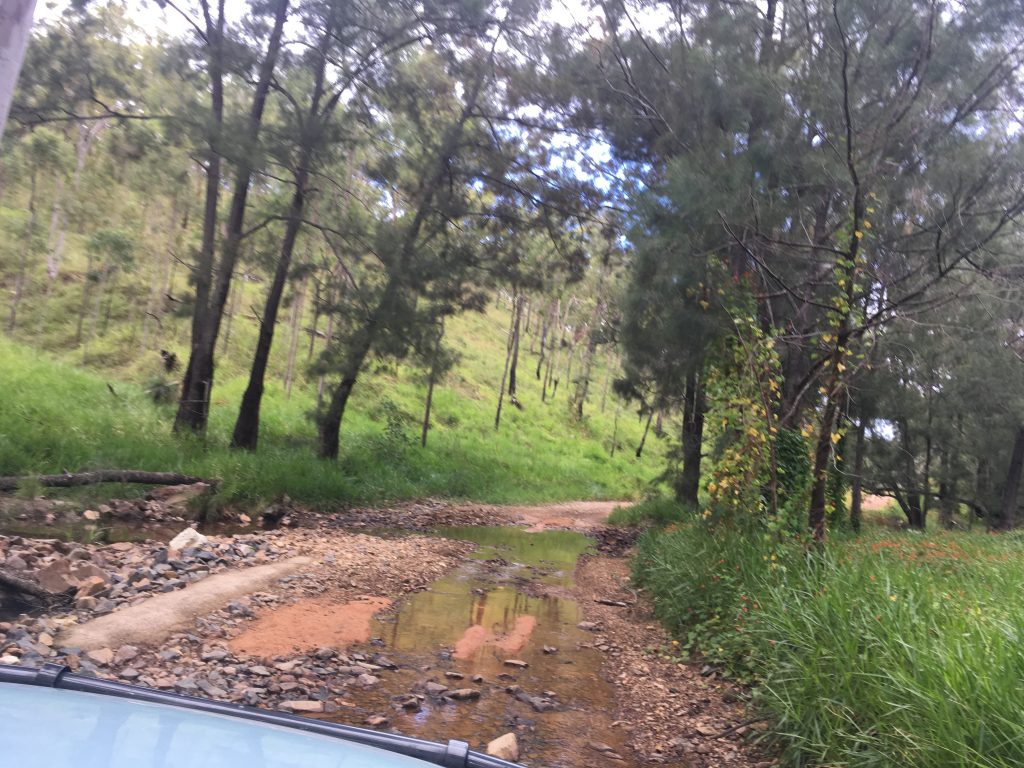 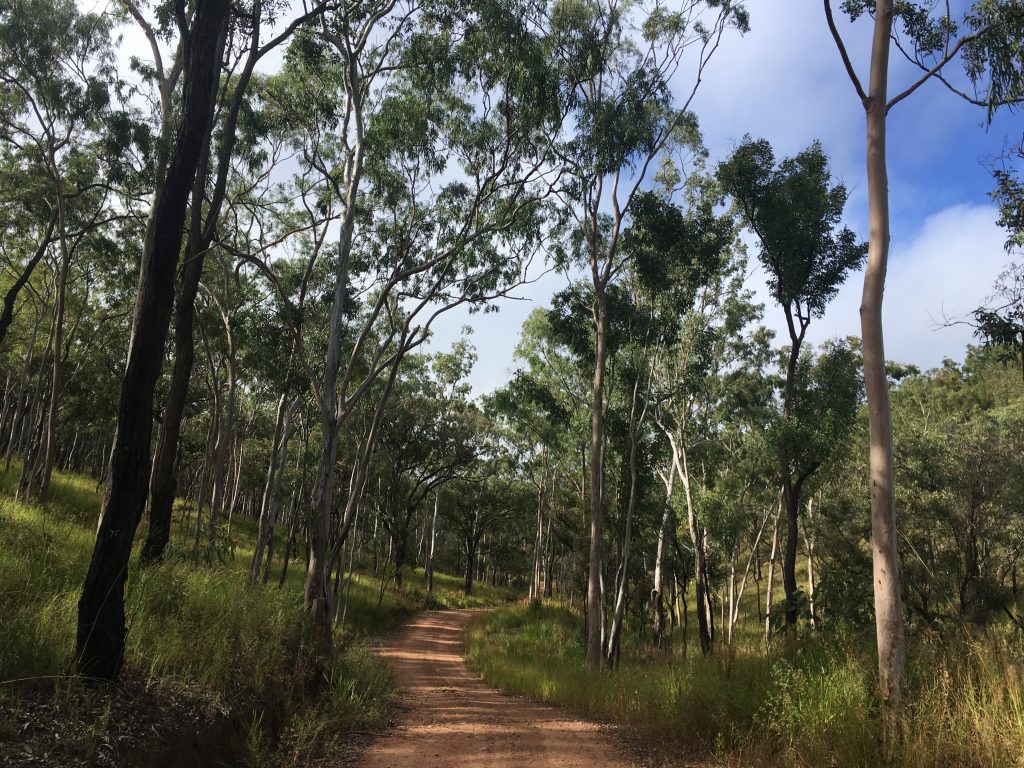 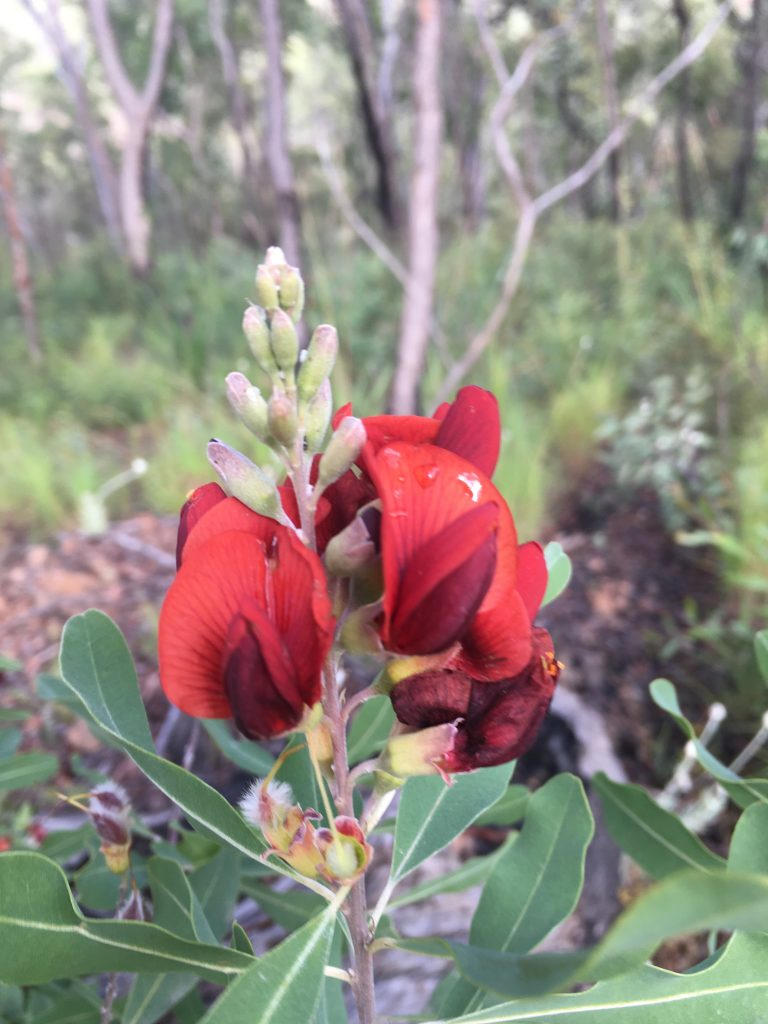 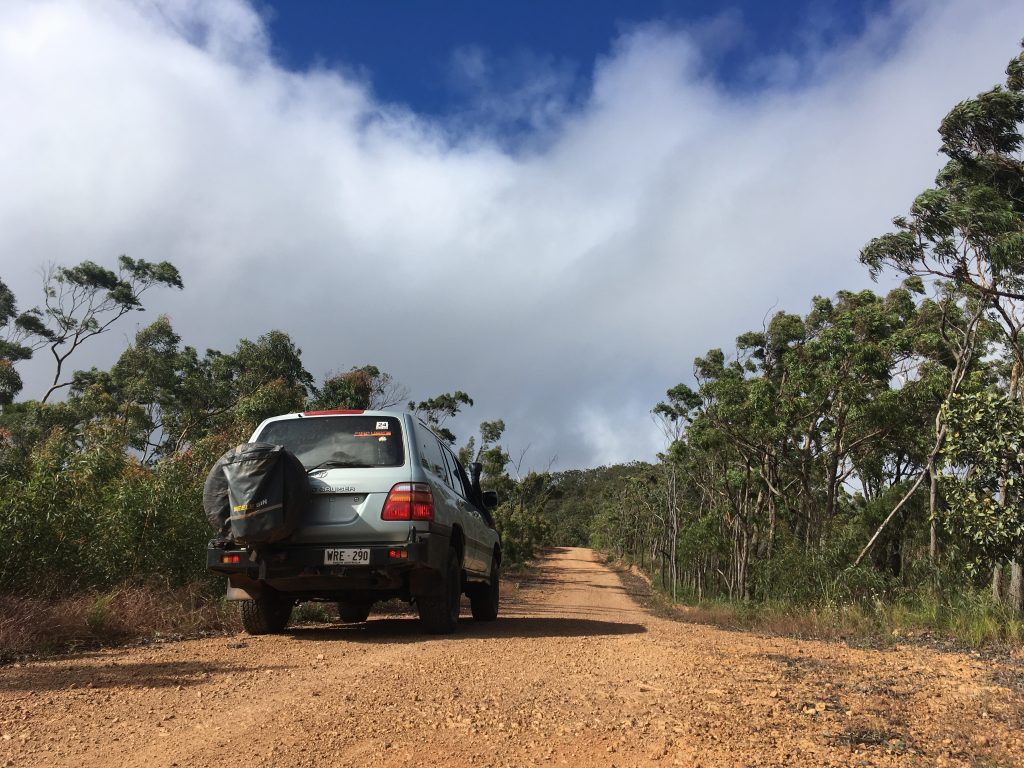 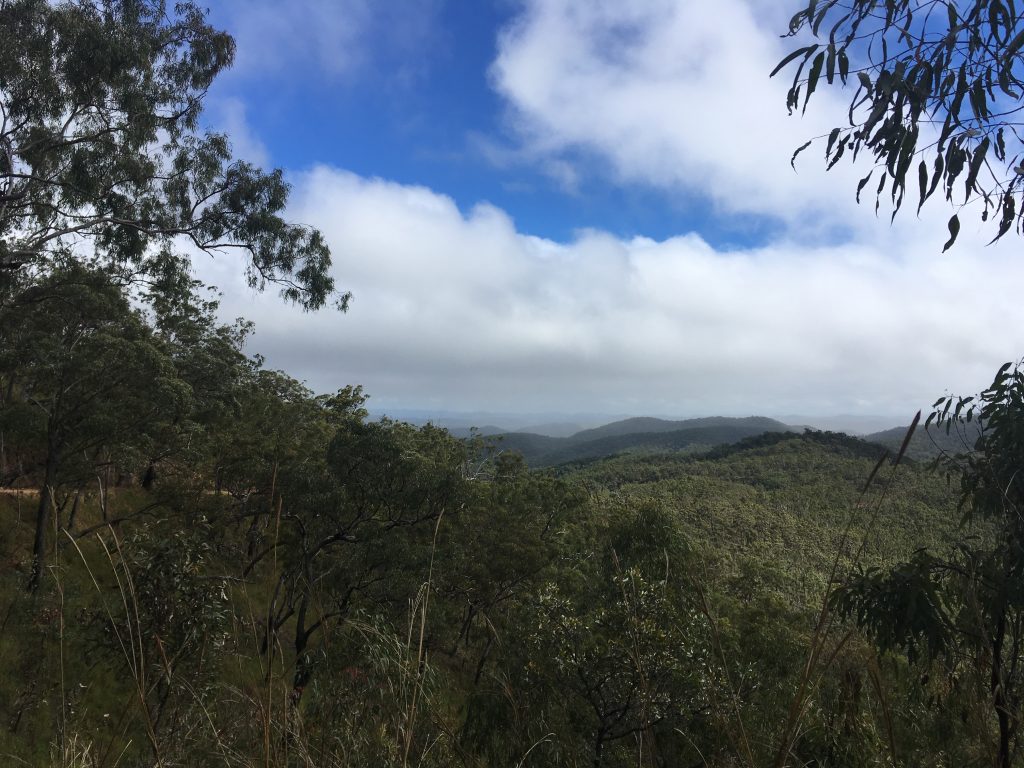 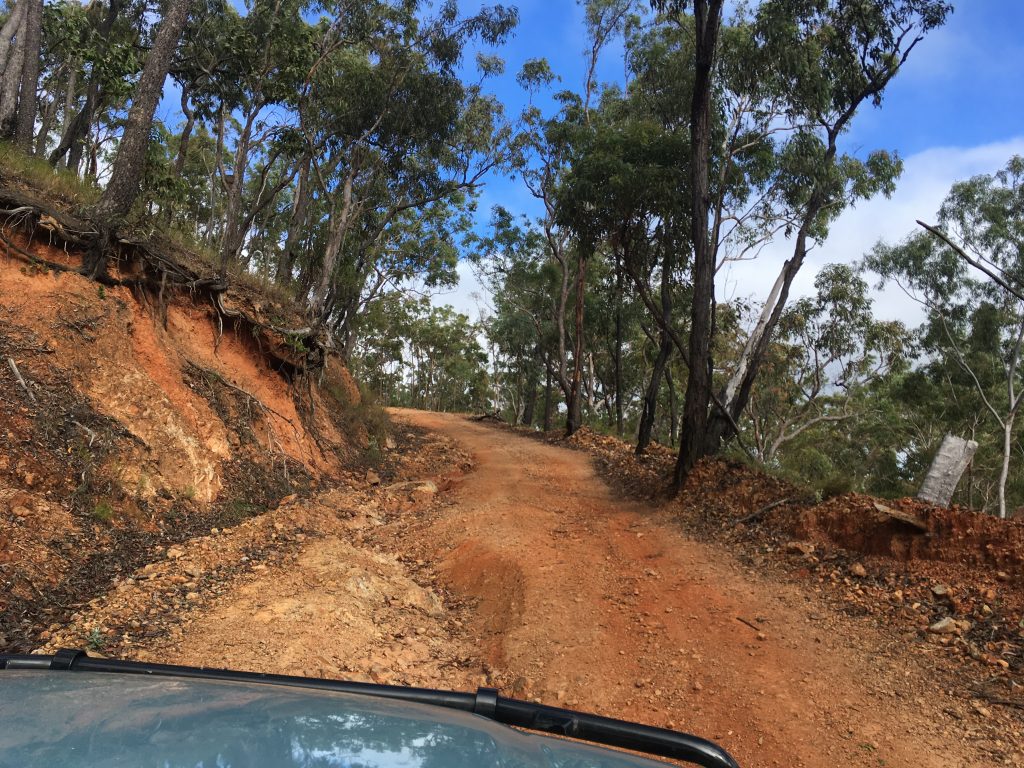 The weather seemed to change depending which way you were facing, but not by much. We came across this billabong, not marked on any of my maps, and high in the hills. 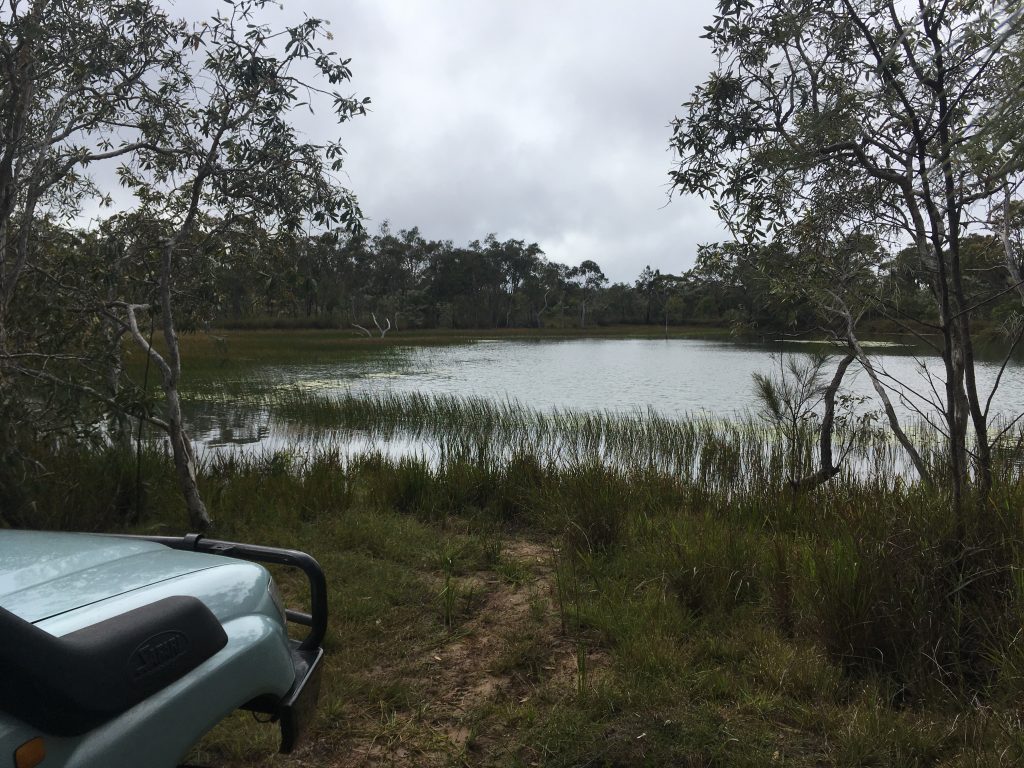 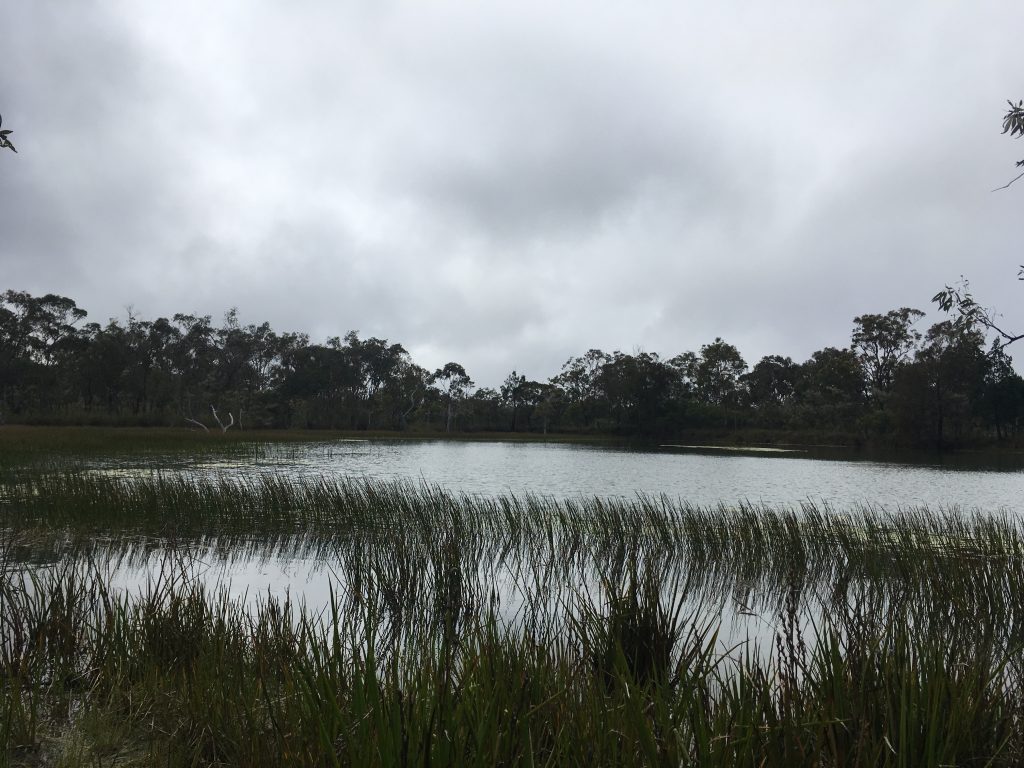 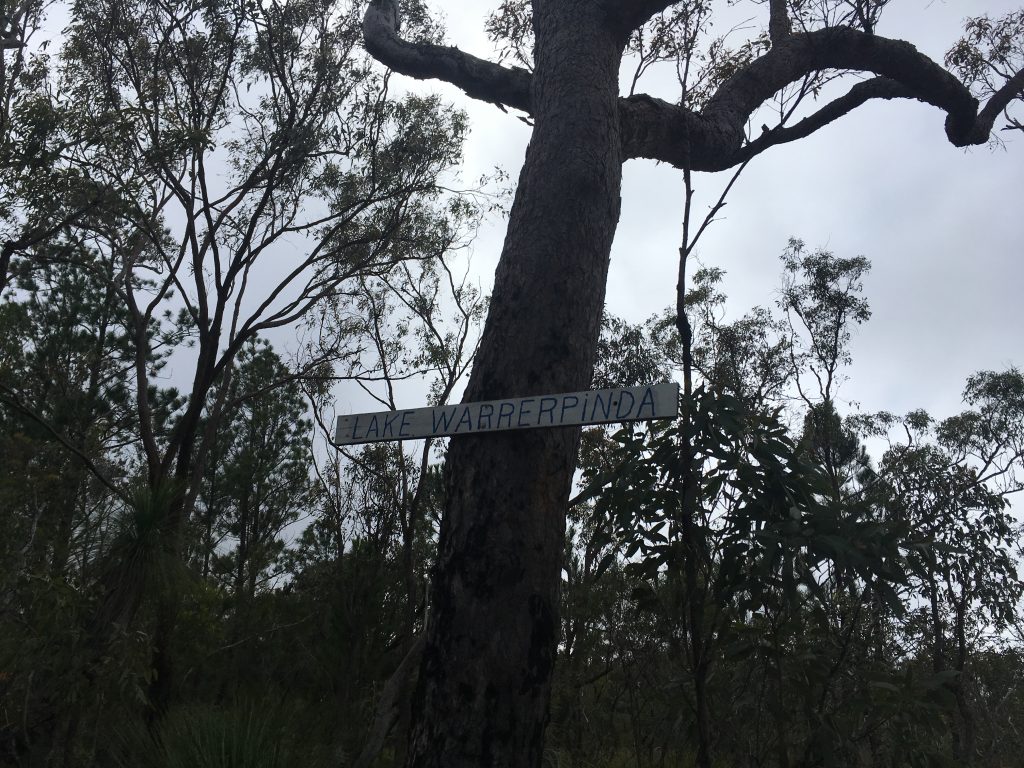 Popping out at the historic mining town of Mount Garnet, we were soon back on back roads. Another gem of alternative route, through wooded cattle stations and a recently formed National Park. 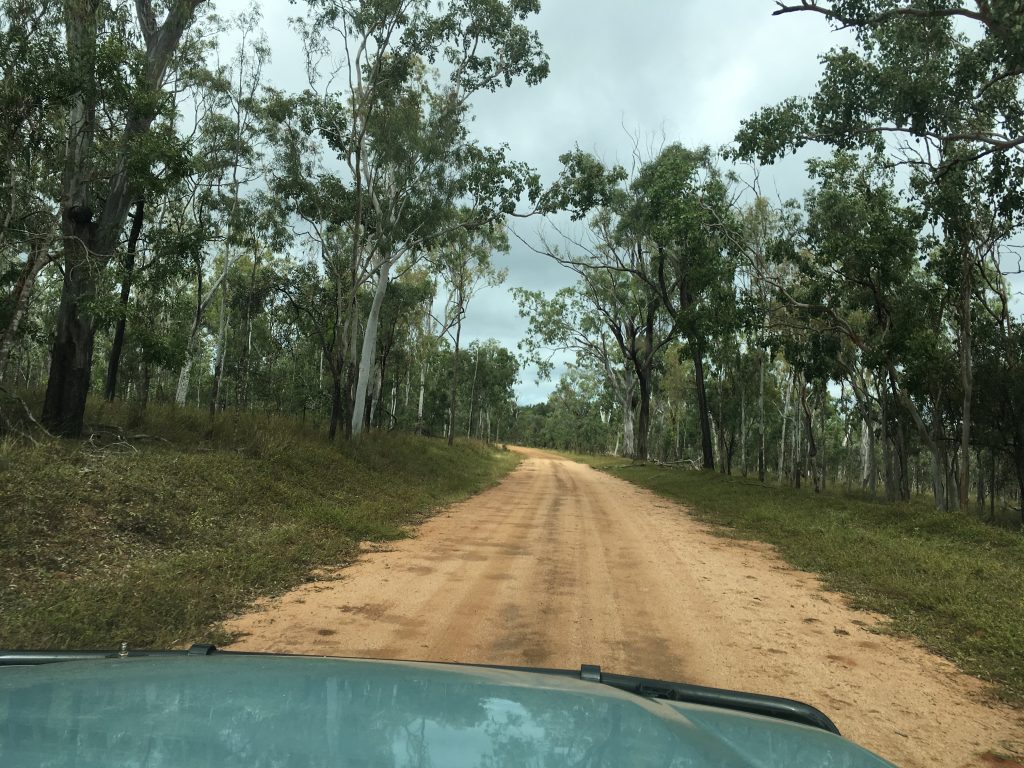 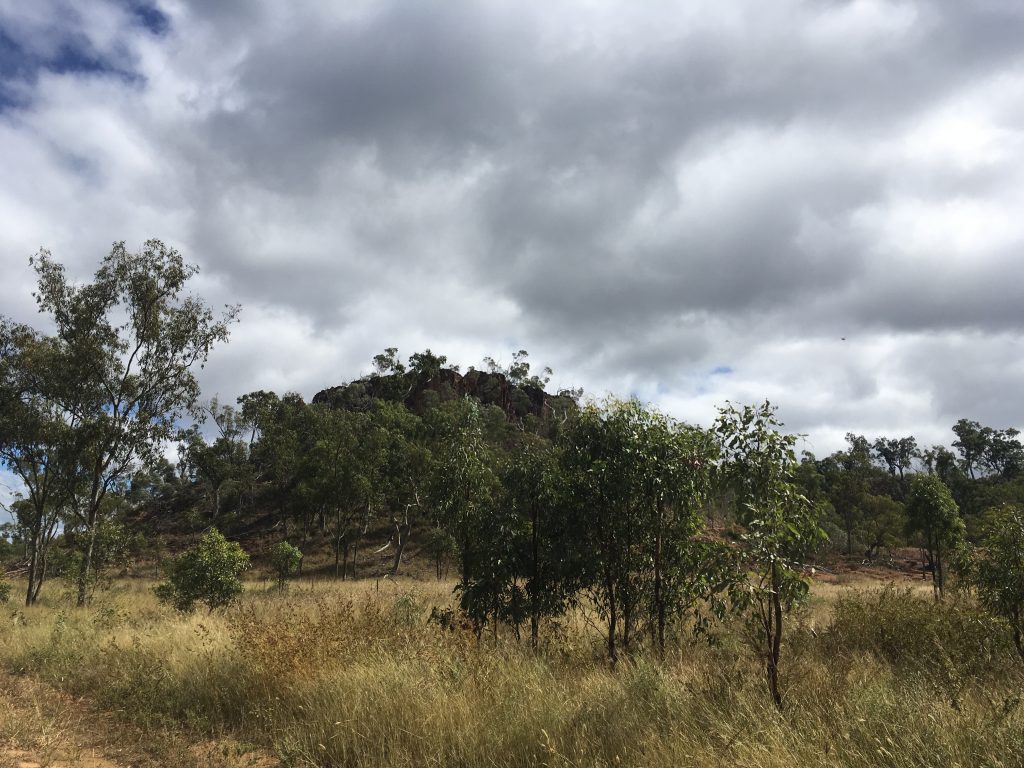 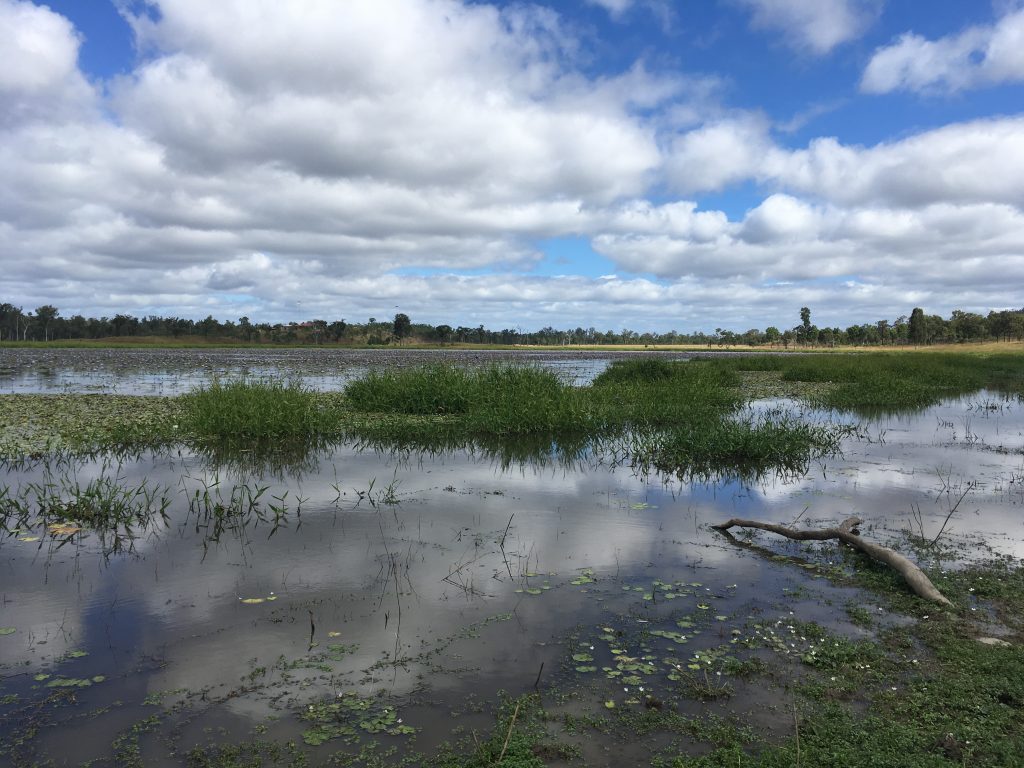 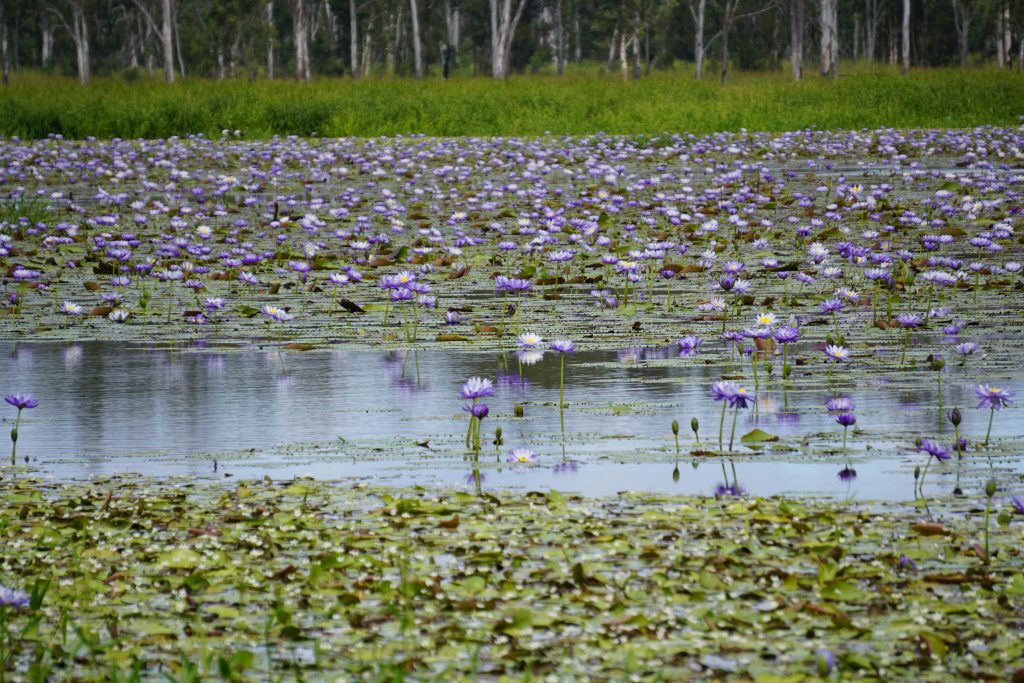 This was one of four river crossings in a row. 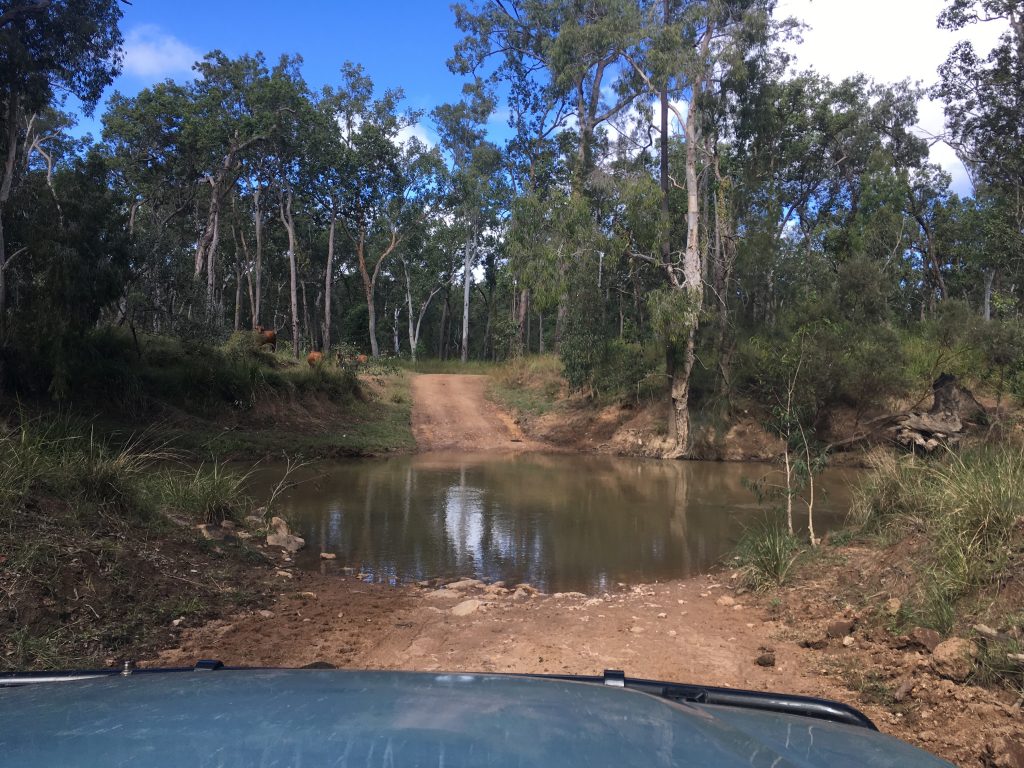 I eased into it, eased out again as it started to go deeper than it looked. Having learnt my lesson from Cape Arnhem, I put it in low range and popped in the centre diff lock, better safe than sorry. The deepest the crossings got was about halfway up the door on the Cruiser, no worries but I bet it would raise the old heart rate in a Subaru. 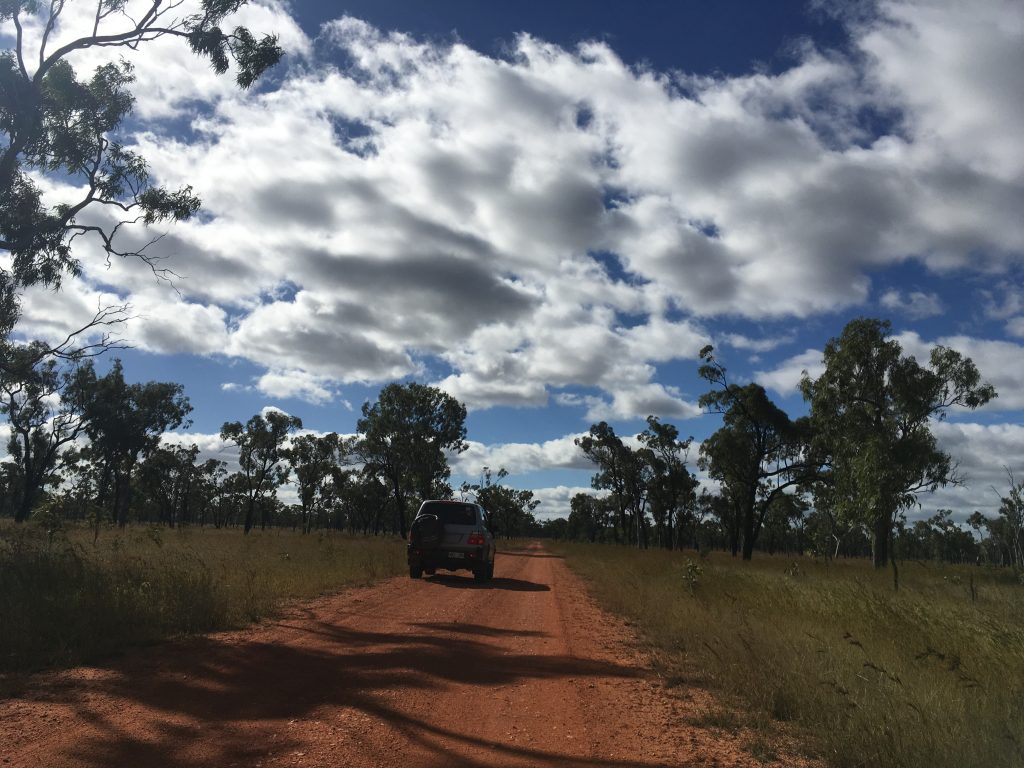 We were headed for a bush camp on the Einasleigh River, but time (and energy) was getting away from us now being late afternoon. Not too mention, the bush camp was an 80km detour. Sometimes you’re just at the right place at the right time. So the small campground behind the Oasis Roadhouse suited us just fine, especially at $20/night (which is about evens in fuel cost with the detour). 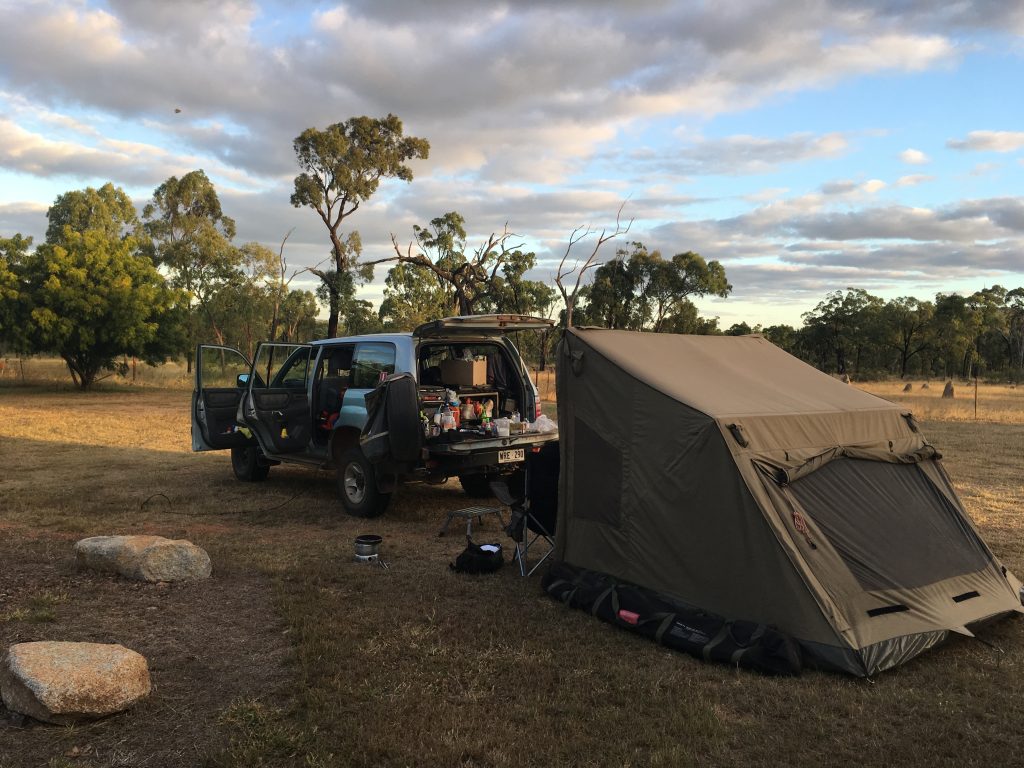 A simple yet tasty dinner that night. Belly pork braised in white wine. We had a few different greens we had bought in Cairns so I just quickly cooked them in the braising liquor. Then reduced that down, seasoned with a little fish sauce and garnished with young ginger and a splash of olive oil. Healthy, tasty, and just used up things we had on hand. 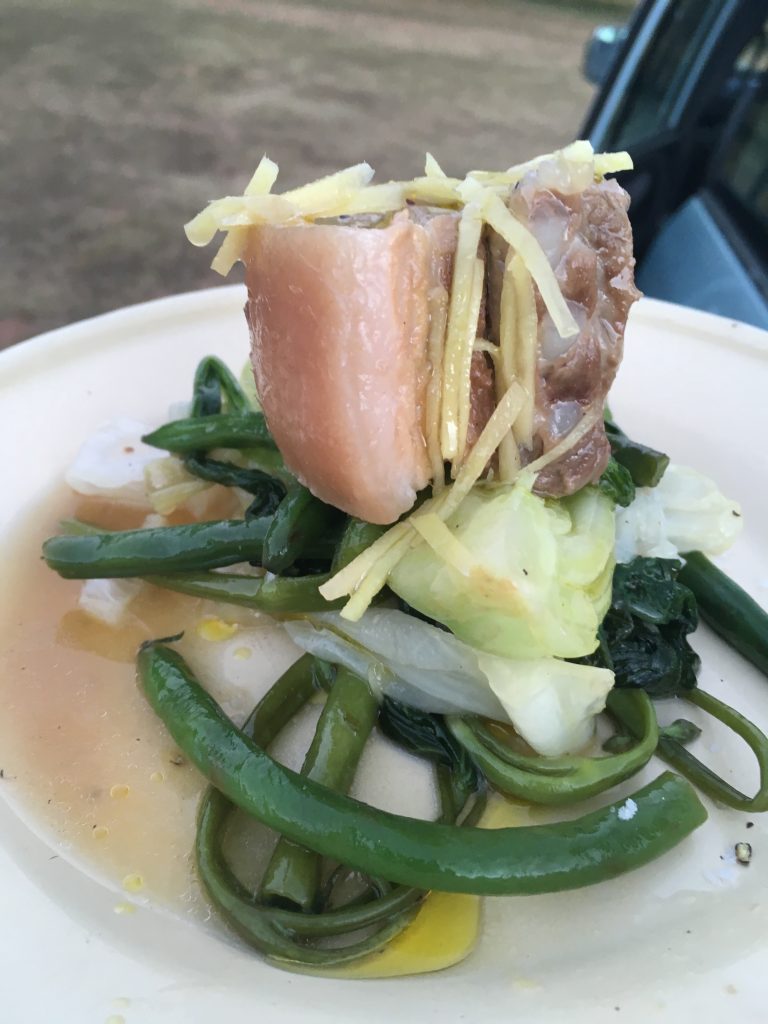 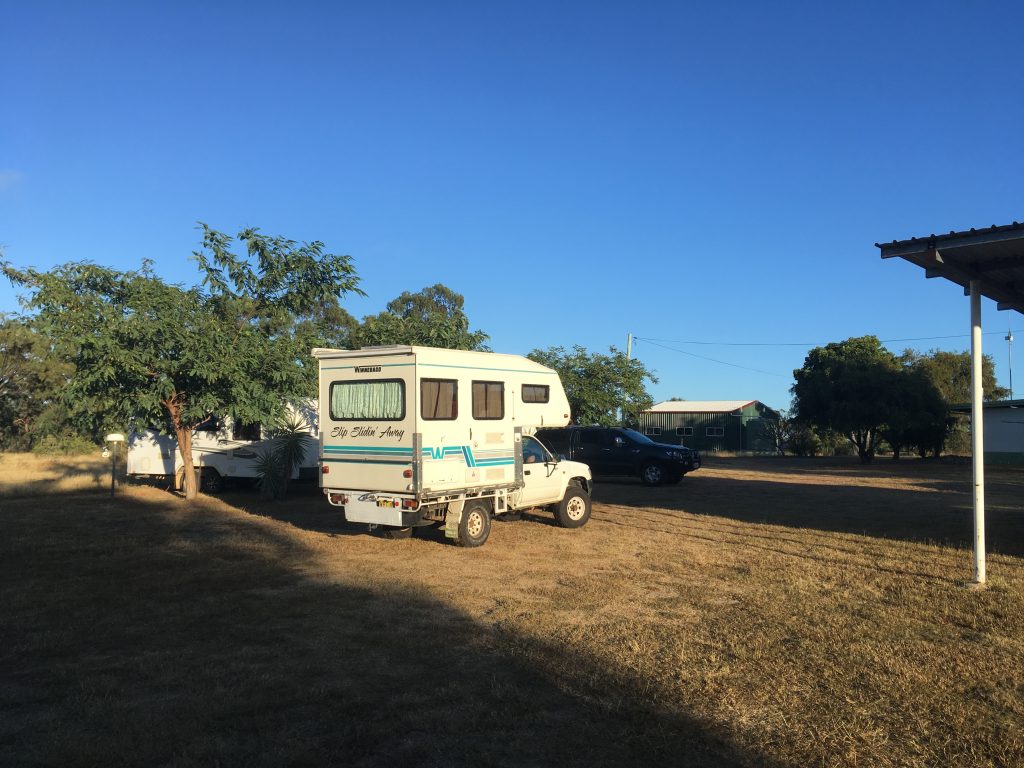 Come next morning as I turned the key to start the Cruiser nothing happened “did you not turn it far enough?” asked N. I tried it again and it fired up no problem “maybe…” I said. Strange… 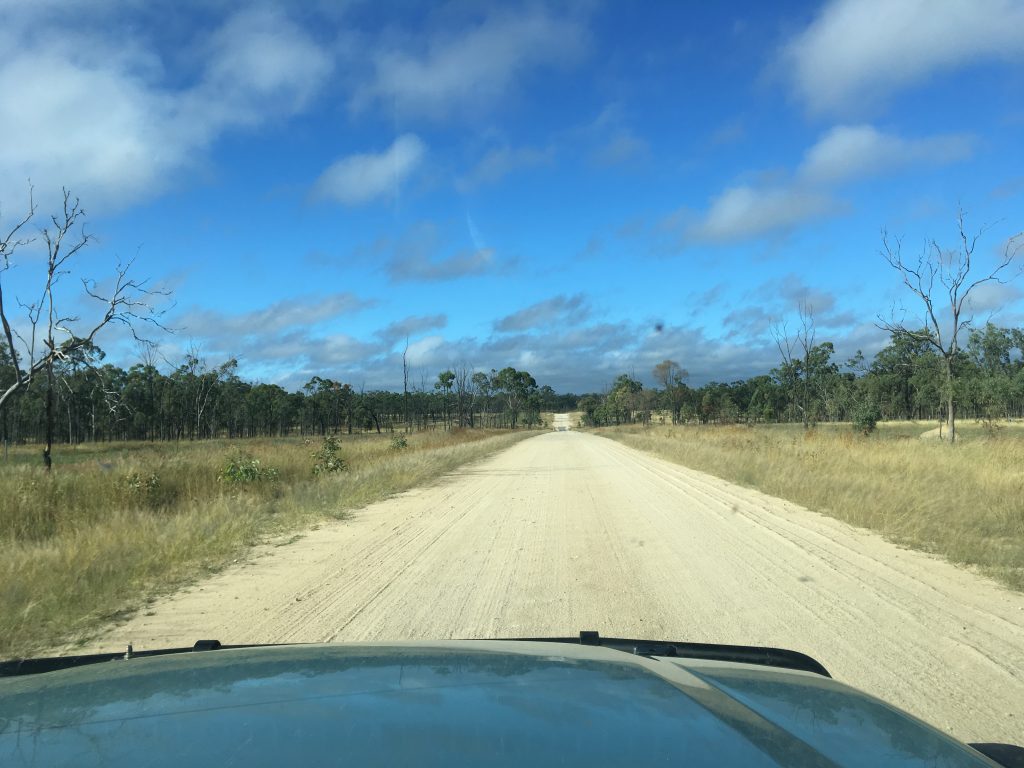 Not that it wasn’t without its surprises. 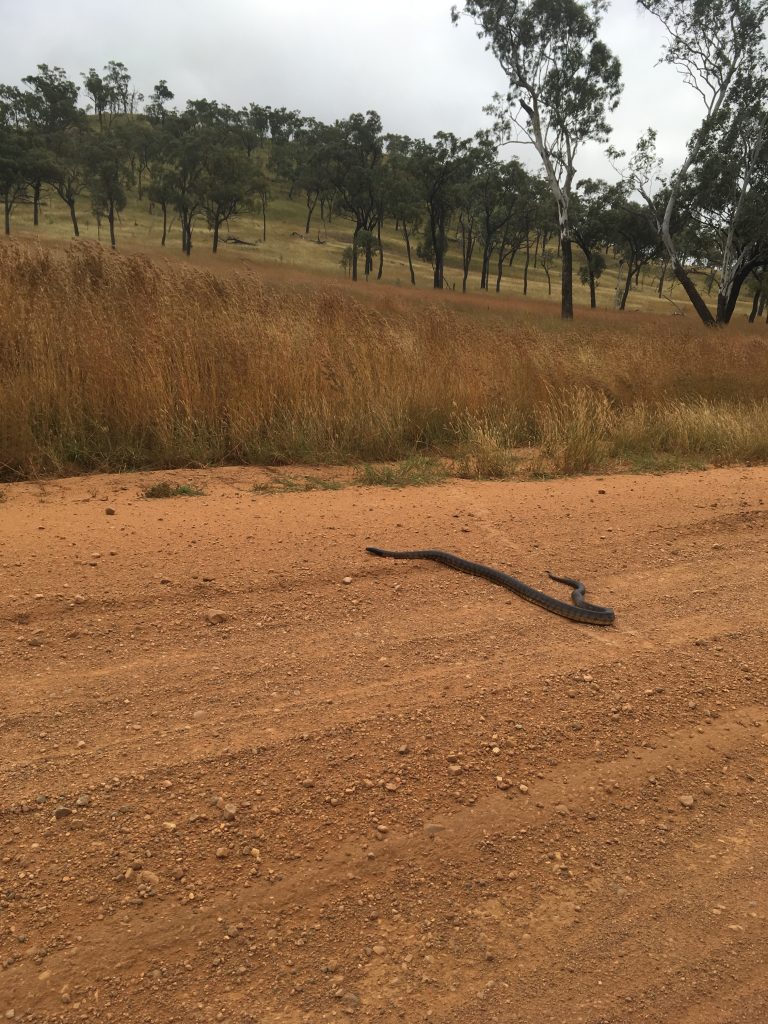 A good size black headed python we think. Didn’t want to hang around once we stopped. 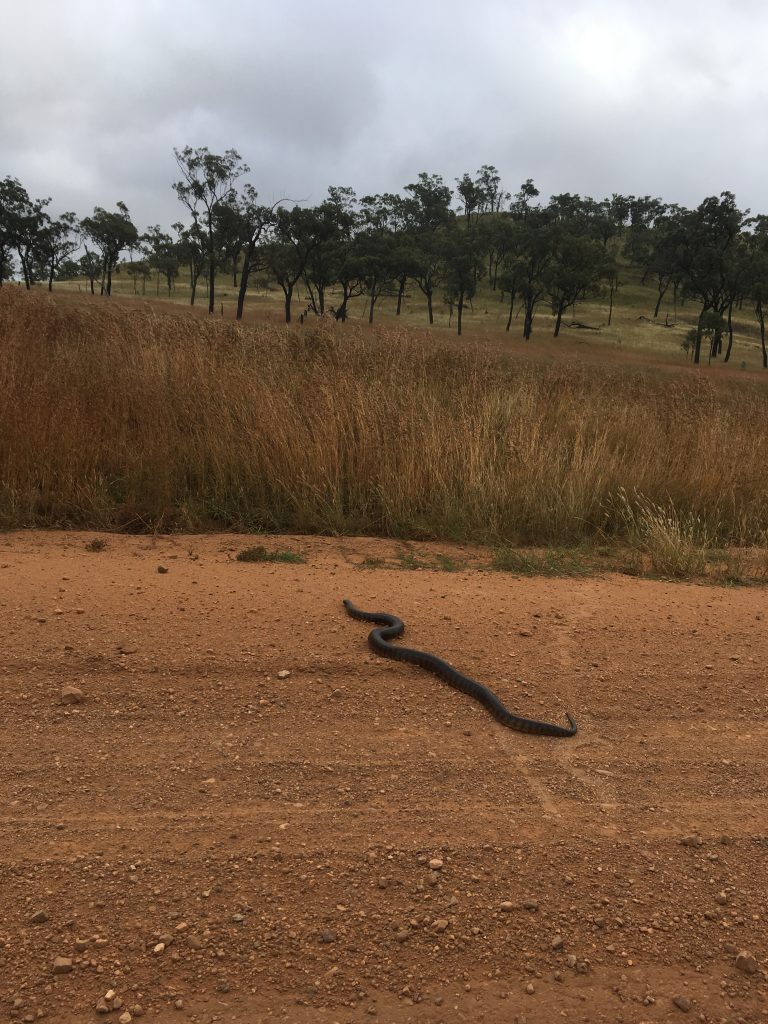 Next town was Hughenden. We notice it was polling day for the general election. Naomi was keen to take part in democracy if we could, but more importantly first to the bakery. More starting troubles outside the bakery, but she did fire up. Round to the polling booth, so while N investigated if we could vote here I could investigate what was going on.

The symptoms were the same as a flat battery or a bad connection to the starter, both possible after all the rough road riding we had done. At first I thought it was the latter, as a wiggle of the cable showed some movement. I put a socket on it, completely tight, the play was just in the plastic cover. I pulled out the multimeter, its battery was flat. Thankfully were in a small town and a shop is open, so I walk round a buy some new batteries.
Battery voltage checks out. I pull out the Thumper (second battery) and hook that up with jumper cables and try starting again, in case the main battery is doing funny things (a multimeter voltage reading is not a load test after all). Still no go.
I check the voltage at the starter – same as the battery.
Maybe the starter is jammed? But I had that out not that long ago back in WA and it looked fine, no real wear, no reason for it to be jammed.
I check fuses. Change the starter relay. Nothing.
I take it out of Park and put it in Neutral. It starts right up.

I turn it off. Put it back in Park, nothing. Back in Neutral, nothing, go again, it fires.

Ok, must be the inhibitor switch (the thing that stops you starting the car in Drive or Reverse, also called isolator switch, neutral switch, etc). Maybe the four mid-door water crossings yesterday finished it off. Maybe it was the what? 20? 30? Others we had done coming across the Top End. Maybe after 18 years it had just had enough…

Anyway, I wasn’t game to turn it back off again.

[I sometimes wonder if the spike of adrenaline you get when something goes wrong out here, is part of the appeal? There is definitely real satisfaction in fixing problems out on the road. That you happened to bring the right tools/spares/skills to get you (or someone else) going again – just a thought, I added this bit in several days later, I wasn’t mulling things over reflectively at the time!]

Thinking it would be a relatively simple fix or bypass, I drive on in the direction we wanted to go. Sticking to the bitumen now, we didn’t need any other problems today. 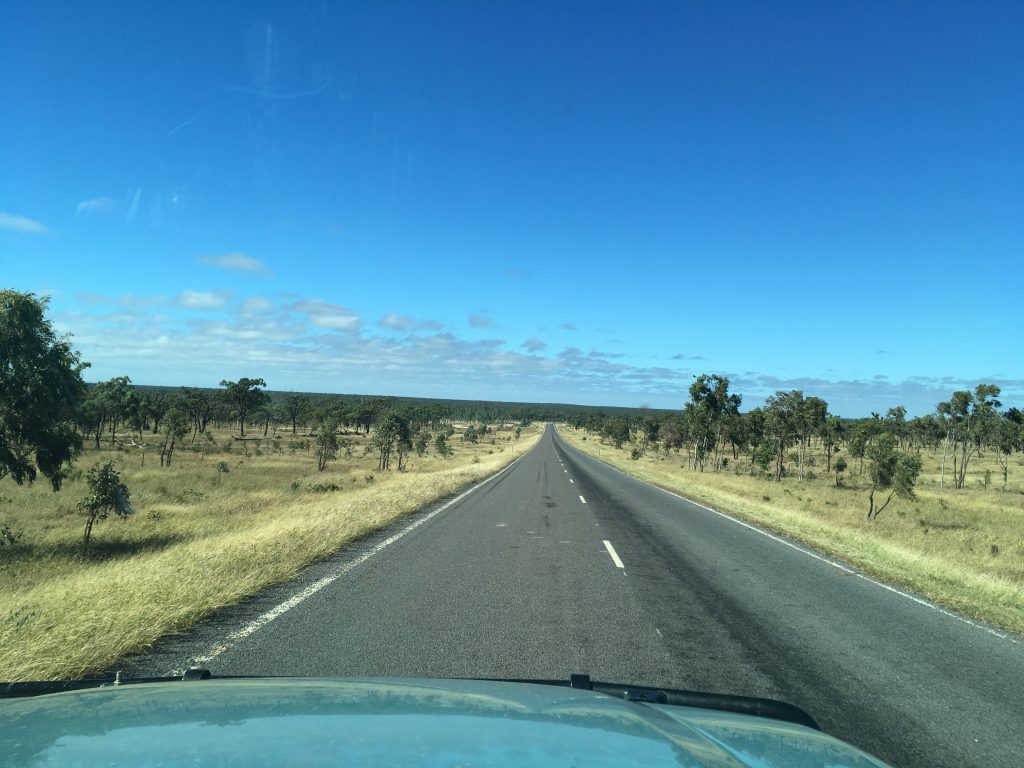 Arriving in Winton some 200km later, this looked, on the map at least, a big enough town to have phone service, maybe a Toyota dealer. As it turns out it had none of these things… Everything from here south-west (our direction of travel) was smaller, and more remote. The smart decision was to drive 175km in the ‘wrong’ direction. To Longreach, the biggest town for miles.

We stopped to check it a couple of free camps on the way, but holy-moley they were busy. With large type RV’s, I didn’t realise this part of Outback Queensland was so popular- as it turns out, this was the weekend of the Longreach Show, hence the flocks.

We rolled into Longreach after hours, but the nice people who run the (frankly massive) ‘tourist park’ got up to book us in.

Also warning us that there is an outbreak of parvovirus in the town. Our dogs are immunised against it, unfortunately their dog was not and was currently quarantined at the local vets fighting for her life and costing $500/day. We sincerely with them all the best for her recovery and go set up camp.

As usual the tent area is almost empty. Although there is an ADV biker tour, camp next to us. It was one of those fully supported jobbies, where a truck carries everything, someone does the cooking, etc. You just turn up and ride, talk shit and drink beer at night. I have to say that I looked quite appealing in a way. Maybe I should learn to ride a moto like every other middle aged bloke…

I crawled under the Cruiser that night and checked out the troublesome switch. Using the compressor I gave the connector a good blow out, but no water came out, shame. I tried re-adjusting it, and that seemed to do the trick. In Neutral anyway…

Next morning back to nothing, no matter where the gear selector was. I was hoping the wiring to the switch would be two or three wires at most, and so easy to bypass, but no, there was probably ten wires in the connector. The wiring diagram told me which should be the ones to isolate the starting circuit, but it would mean hacking up the factory wiring, no thanks.
There was a Toyota dealer here, let’s just wait till Monday.
As well as studying the wiring diagram overnight, it also occurred to me to just do what I had done several times on other people’s cars, and just hot-wire the starter motor. I knew the starter had main voltage, we just needed the solenoid to kick in. So a wire from that connector straight to the + on the battery and up she fired. Tie the wire off for next time. Once again, the benefits of sleeping on a problem… 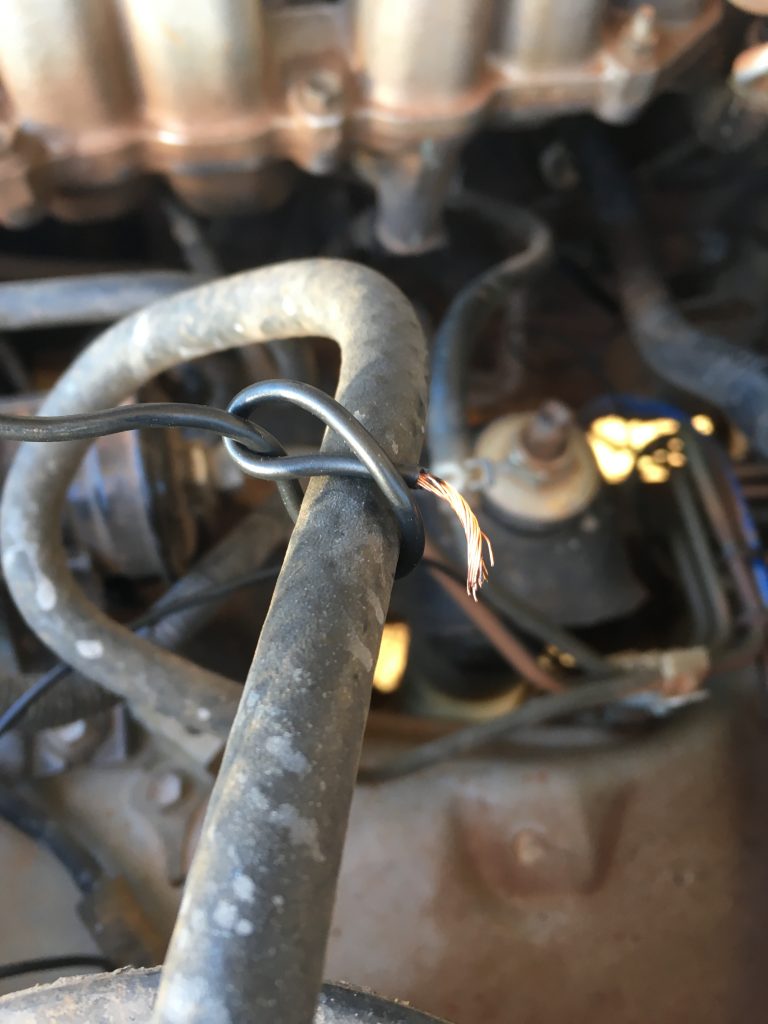 We stayed two nights in Longreach which wasn’t so bad. We got the update on the dog situation. Plus a bit more writing this journal whilst we had the old internet. I took the opportunity to have a good look round the Cruiser. I found a small amount of play in one of the rear wheel bearings (the hub service is well overdue, but not a ‘side of the road’ job so I just check them every few thousand k’s), so I tweaked up the adjuster on that side. 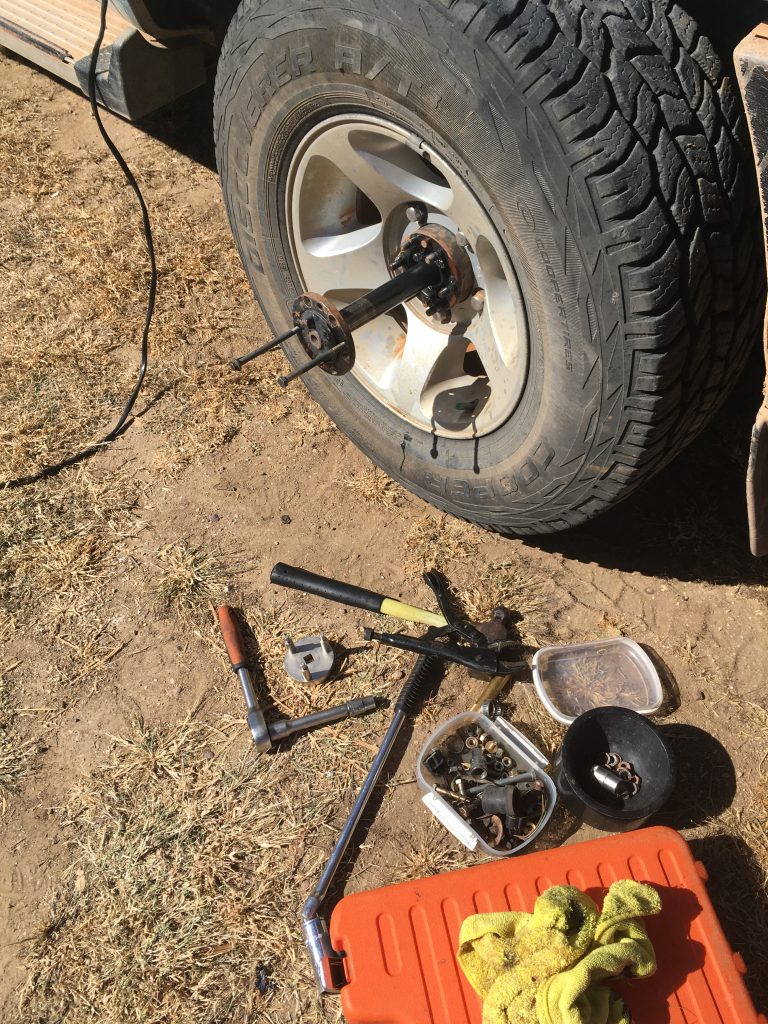 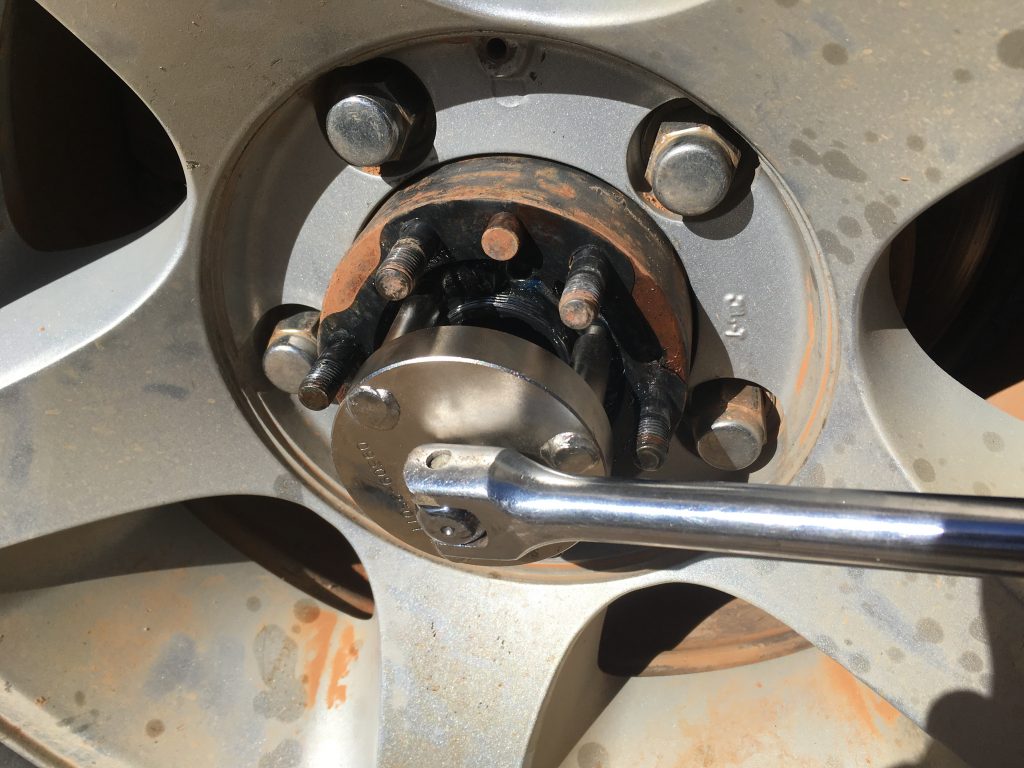 Whilst I had the use of a camp kitchen, I cooked up the rest of the pork belly. Pork Paella. 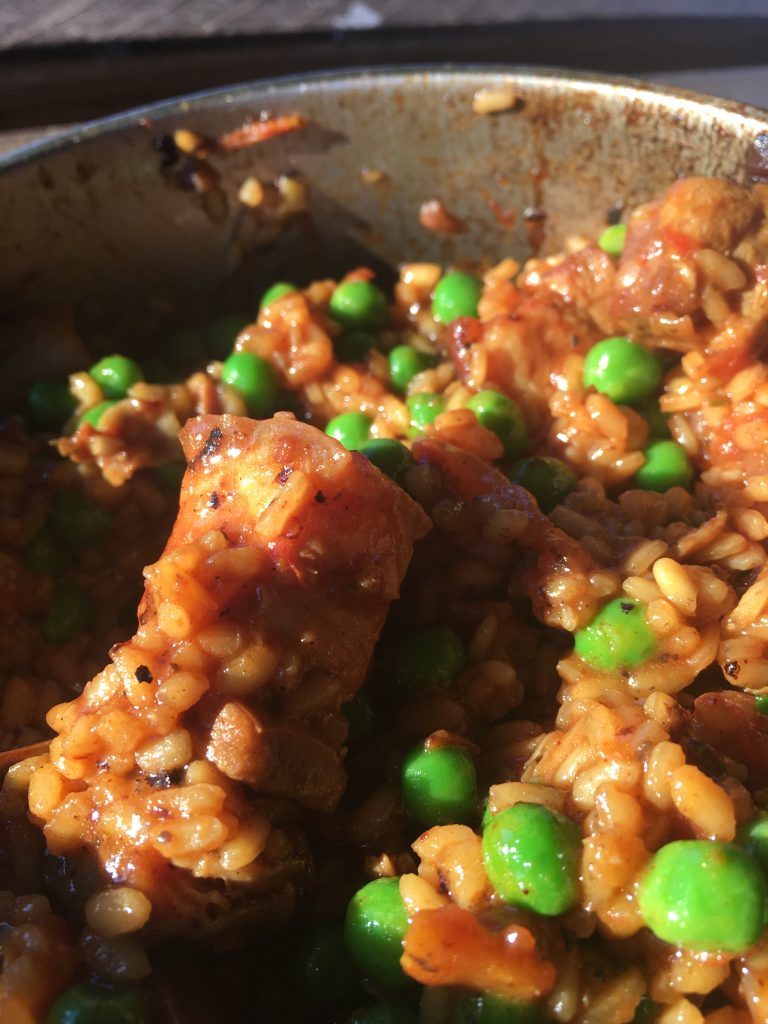 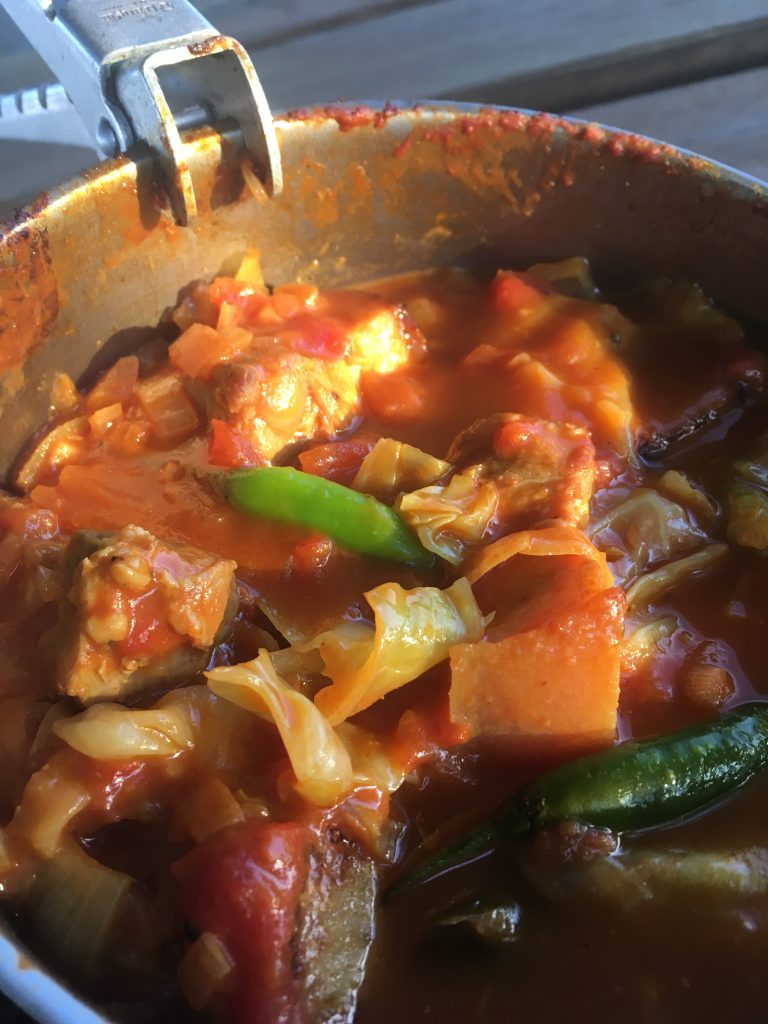 Come Monday morning, I arrived at the Toyota at 0805. After their website declared the parts department was open from eight. “Oh the parts guy doesn’t start till eight thirty” said the nice girl on the early shift, whilst the ‘manager’ didn’t even look up from his very important computer screen business. I left details of what I needed and my VIN and phone numbers. Nice girl did give me the information I needed though, as I was pretty confident the part wouldn’t be in stock. 3 days out of Brisbane. 5 days out of Sydney.

So I went and picked up N and the dogs, we packed up our gear and restocked at the supermarket. I put a call into Alice Springs Toyota, as by now it was about 10am. Knowing the Alice Toyota would be switched on to this sort of situation, and knowing their turn around time was about the same (having been there last year). We could make our way cross-country in the time it took to part to ship. They texted me the schematic so we could both confirm we had the right part, and order was placed. Hopefully available Friday, dependent on the shipping agent. Understood. Sweet.

I never did get a call from Longreach Toyota.

So, hot-wiring our way to Alice Springs it is. Let’s take the scenic route. 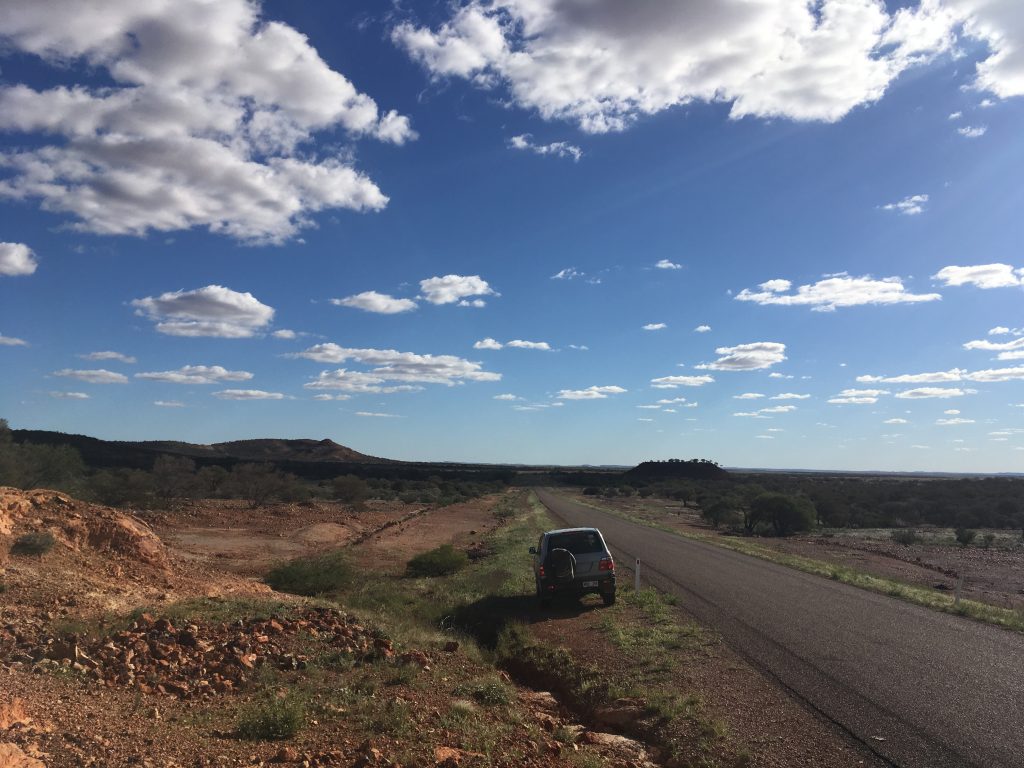