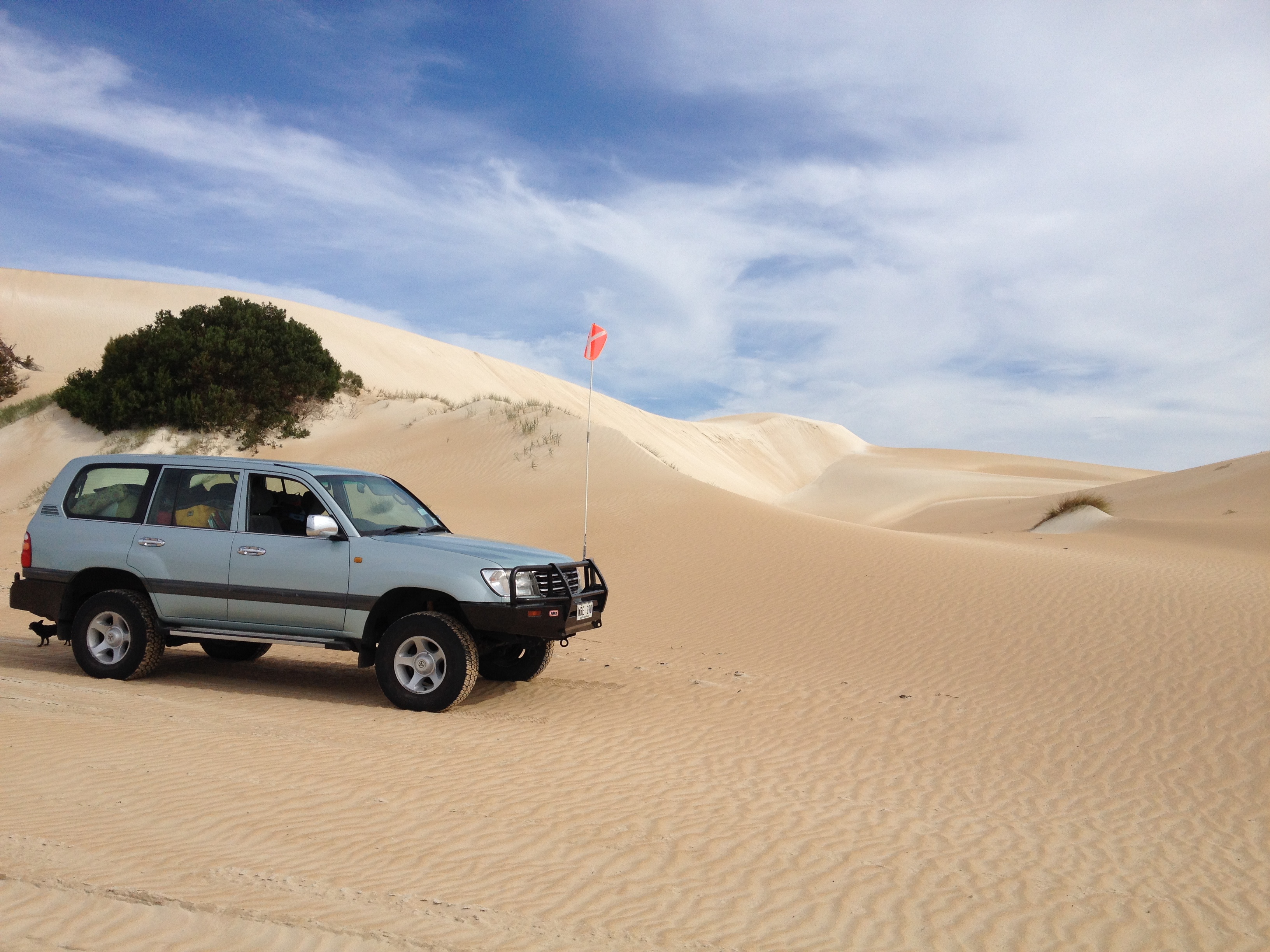 For those that don’t speak Toyota, it’s a 4.5L 6cylinder petrol Cruiser with an auto gearbox and solid axles front and rear. 50th Anniversary Edition means it’s a bit more plush than a GX, and yet still pretty simple inside. No sunroof, LCD screens, electronic ‘driving aids’, leather, etc. Just a load of switches, AC and power windows is about as flash as it gets. Perfect.

Why petrol? Well, buying a petrol Cruiser is a whole heap cheaper than buying a diesel version, that’s the short version. Diesels need more servicing and tend to have led a harder life, especially if a naturally aspirated diesel which is all you can get in the Hundo if you want live axles. To get a turbo diesel you have to have independent front suspension, plus those things are still $$$. $$$ that can be spent on adventuring rather than kit. Plus, as a fast car guy most of my life, I know petrol engines and am comfortable working on them. Not to say I wouldn’t entertain diesel at some point, it definitely has some advantages, but that’s a future bridge to cross.

Even at 2001 model year, a good Cruiser is still in great condition and very reliable. Although neglect it at your peril. They will put up with problems more than most, but putting a bad 4×4 right is expensive no matter what it is. Swallow the upfront cost and buy they best you can. Then keep on top of the maintenance, they are pretty simple cars to work on for many straightforward maintenance tasks. If you have to spend some money on it, spend it. It will pay you back when you want to get ‘out there’.

It is commodious like you would not believe. It’s a big truck, no doubt. However, it can swallow A LOT of gear no problem. We don’t run a roof rack, everything we have, which is a pretty comprehensive camping set-up, fits inside no problem (to be clear we run it as a 2 seater, second and third row seats out. Although it can, and has been converted back to a seven seater when required). 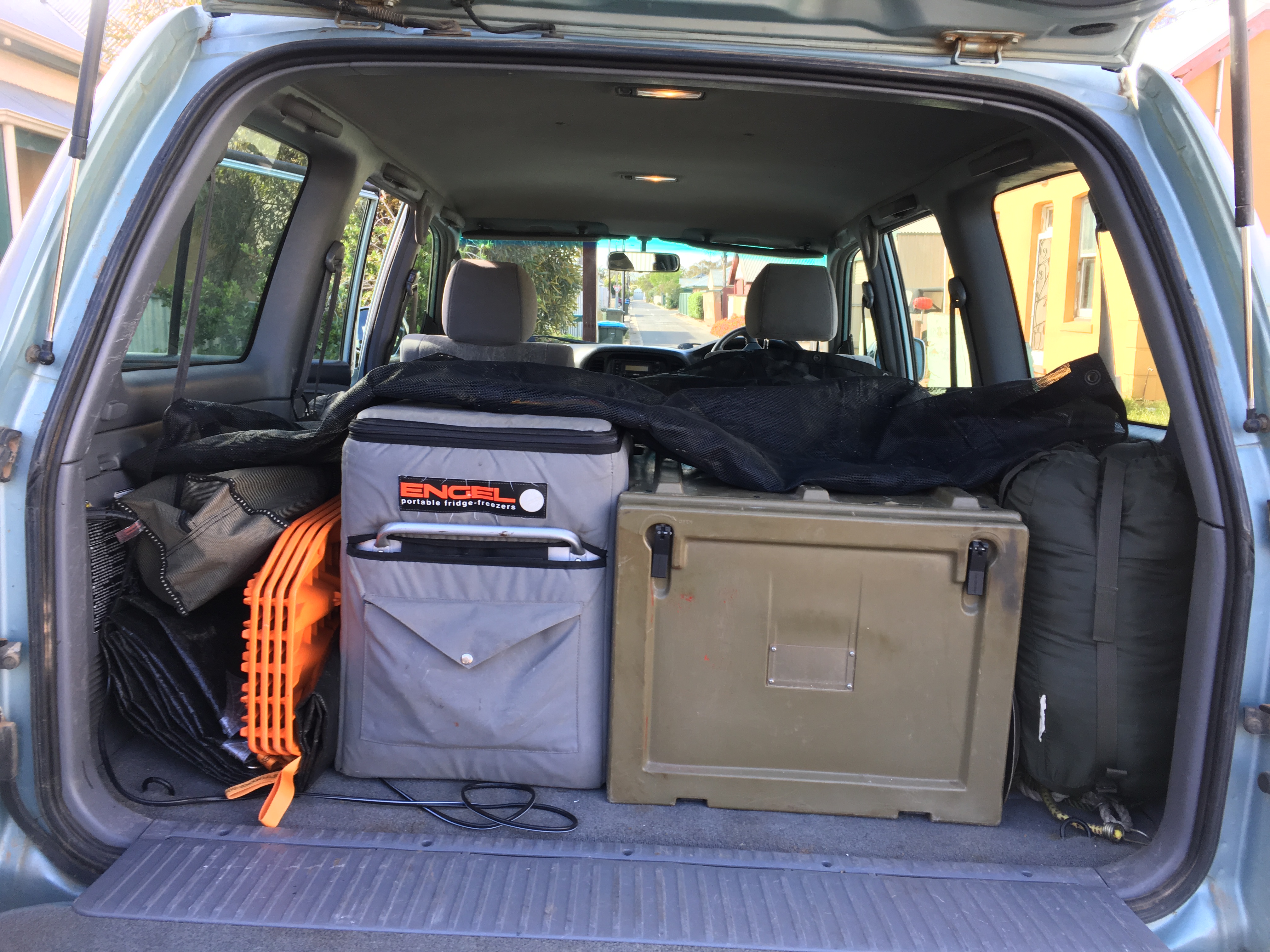 It is very capable off-road. So a 105 series is essentially an 80 Series with a 100 series body and a later build date. So it gets the solid axle design of the 80 series (although the axles themselves are 5 stud, like a 70 series) which means simplicity, durability, coil springs and plenty of articulation. The standard rear LSD is pretty weak and is fairly ineffective once the truck has a few miles on it, the front diff is open. However the design of the suspension and relatively soft coils means the wheels stay in contact with ground most of the time. We are adding a rear locker to our truck, but mostly due to carrying a heavy load means we want to be able to ‘walk’ more tough sections rather than using momentum.

Payload. So in addition to the size is the weight you can (legally) carry. 3180kg is the GVM (gross vehicle mass) on this truck, and unloaded without the rear seats in it and approximately 120 litres of fuel our truck is 2480kg. This means you can load it up 600kg of crap, ha ha. Seriously though, that is one of the advantages of an older truck vs something like a 200 series Land Cruiser.

Basic. Yes, that is a plus point. This truck is comfortable where it matters, but doesn’t really have any extra ‘luxuries’. This means less to go wrong and you don’t feel so bad about genuinely using it. It is also one of the last relatively simple vehicles in terms of the technology in the bits that operate it. This means it is less demanding on the maintenance side, most jobs can be done by a competent home mechanic. It is also less fussy about fuel quality than a common rail diesel. 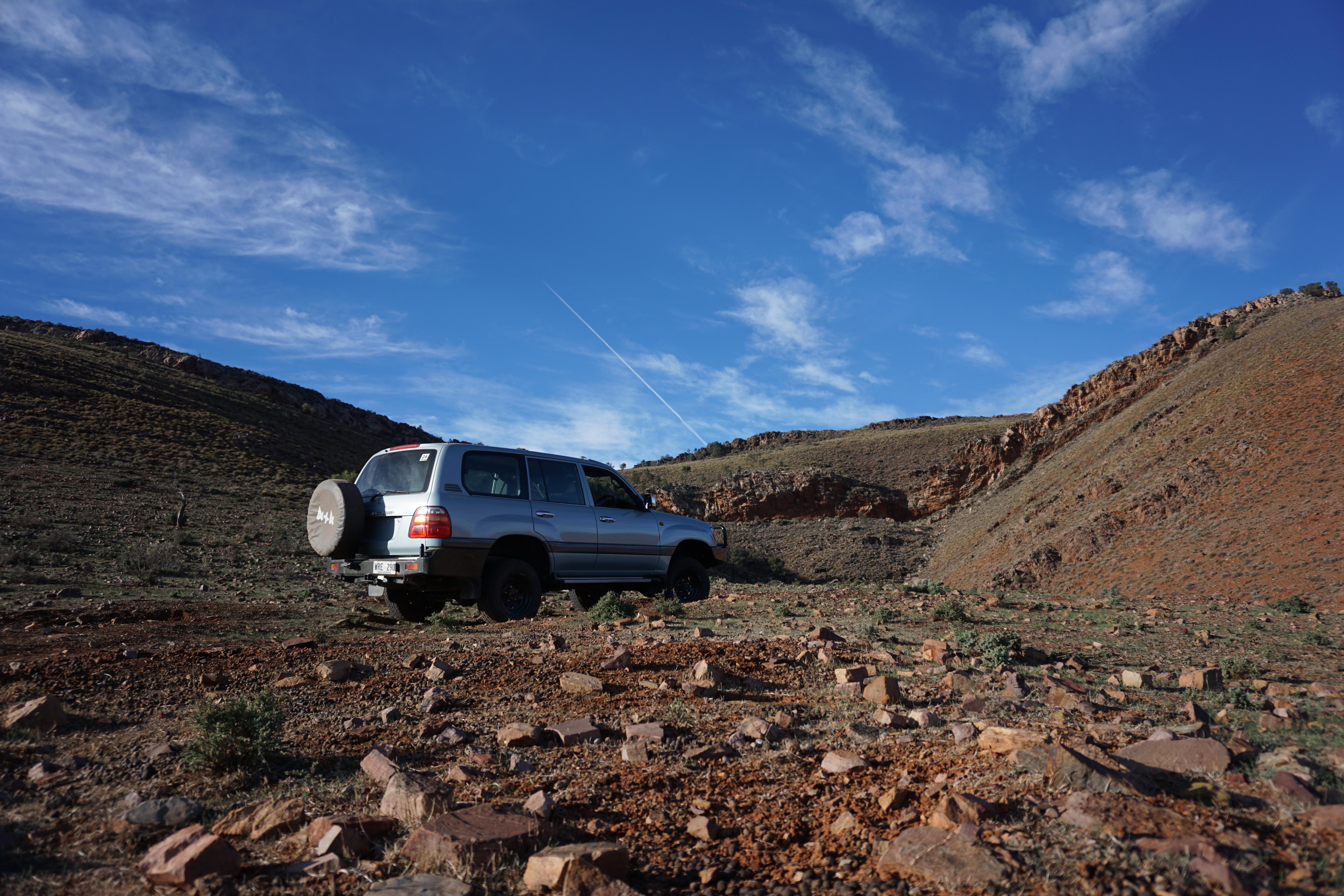 Saying it has poor fuel consumption, is a like saying Hitler was a little bit naughty. Its drinking problem is magnificently catastrophic. On par with a Range Rover of the same year, but that is no excuse. This engine is particularly bad – despite appearing to be a pretty modern design at the time, twin cam, 4 valves per cylinder, ‘coil pack’ ignition, etc.

It is a nice engine to drive, lovely power delivery and I’ve never found it lacking in its potency, all things considered.

However, it is renown as a very long lived engine. I have had multiple people come up to me with tales of running these things into many, many 100,000 of kms. Maybe its ‘inefficiency’ is a contributing factor to that? Who knows. It’s just money at the end of the day. 4×4’s cost money to run, no matter what it is. It’s just a matter of where you spend it I guess.

Yeah, that’s it for minus points. If you haven’t guessed, I like this truck. It certainly doesn’t drive modern in anyway shape or form, but I like that too. Your mileage may vary.

I am a firm believer in modifying as little as you have to. Manufacturers spend millions on engineering a 4×4. Many compromises have to be made for a vehicle that can be used on and off-road. You better think hard before you undo all that work!

The 4×4 industry from the media, event organisers and of course workshops and aftermarket suppliers. All rely on you modifying your vehicle, so don’t let me stop you. Just remember to get out in the bush with it, not just posing around town.

Climbing down from my soap box. Here’s a list of what’s been done to our 105.

This was all done by the previous owner, which was nice as it’s many $$$ just in those parts. A Toyota full service history was another bonus. Strangely they didn’t do some other perhaps less expensive mods like decent tyres and castor correction bushes, but anyway what they did do gave me a great platform to build from. 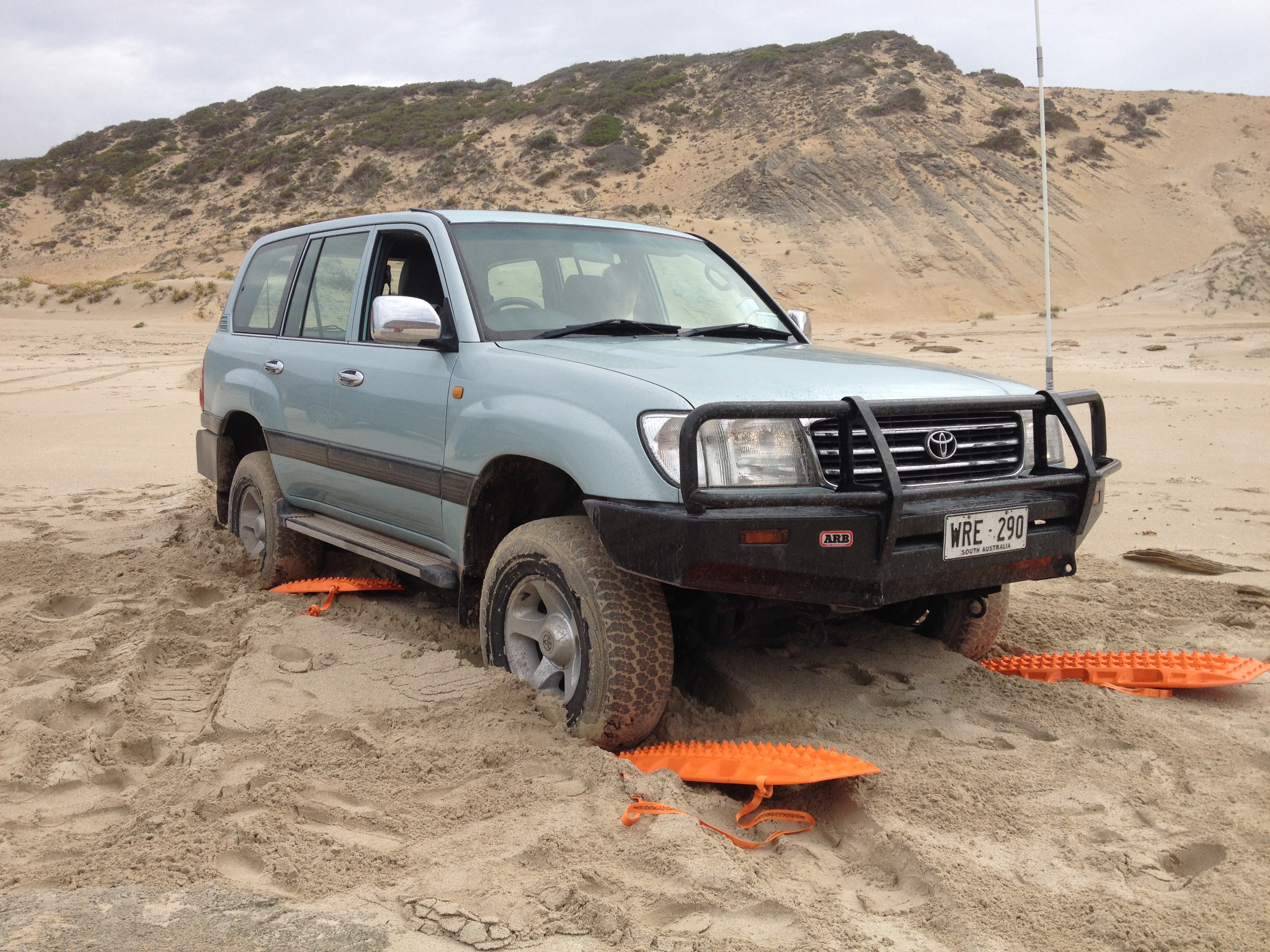 Since I’ve had the truck:

That’s it. Hopefully nothing more than we need. I intend to add a rear (and maybe a front) locker to replace the very worn out LSD. Most of our budget gets spent on maintenance, camping gear and actually getting out there. 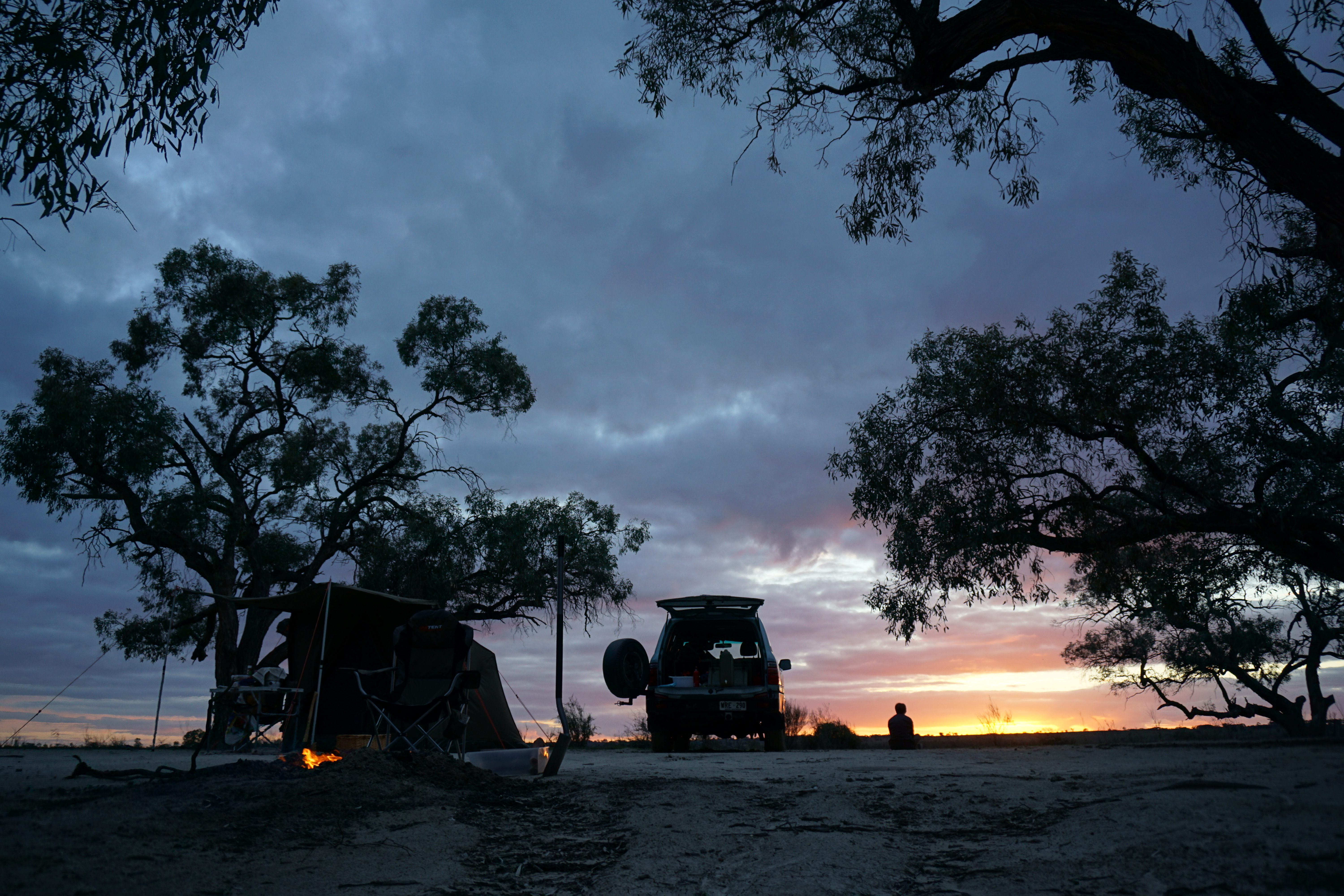